The Two Times Volkswagen Lied To Us Via Tiguan Taillights

I have a soft spot for Volkswagens, mostly the air-cooled ones, but I have owned more than my share of water-cooled VWs, too. I had an ’82 Rabbit convertible that was a 90 horsepower little fun-basket, a Passat wagon with an oil pan made of something with the same bending strength as Passover matzoh, and most recently, a Tiguan that’s proven to be kind of a time bomb. Despite all the issues I’ve had with my more recent liquid-cooled VWs, I’m still pretty forgiving. Even Dieselgate, one of the largest corporate betrayals of trust in recent memory, feels largely forgotten. But I think the one thing I can’t totally forgive Volkswagen for is how they made Tiguan taillights into tailliars, not once, but twice. Allow me to expose this deception for you.

The more recent example of Tiguanian taillight deception is one I’ve discussed before, referenced in a certain taillight-focused bit of crime fiction. I’m talking about the 2012 facelift of the first-gen Tiguan, where a lot of the look was reconciled with VW’s then-current design language and the changes included a new grille and new lighting, front and rear.

At the rear the new taillights looked like this: 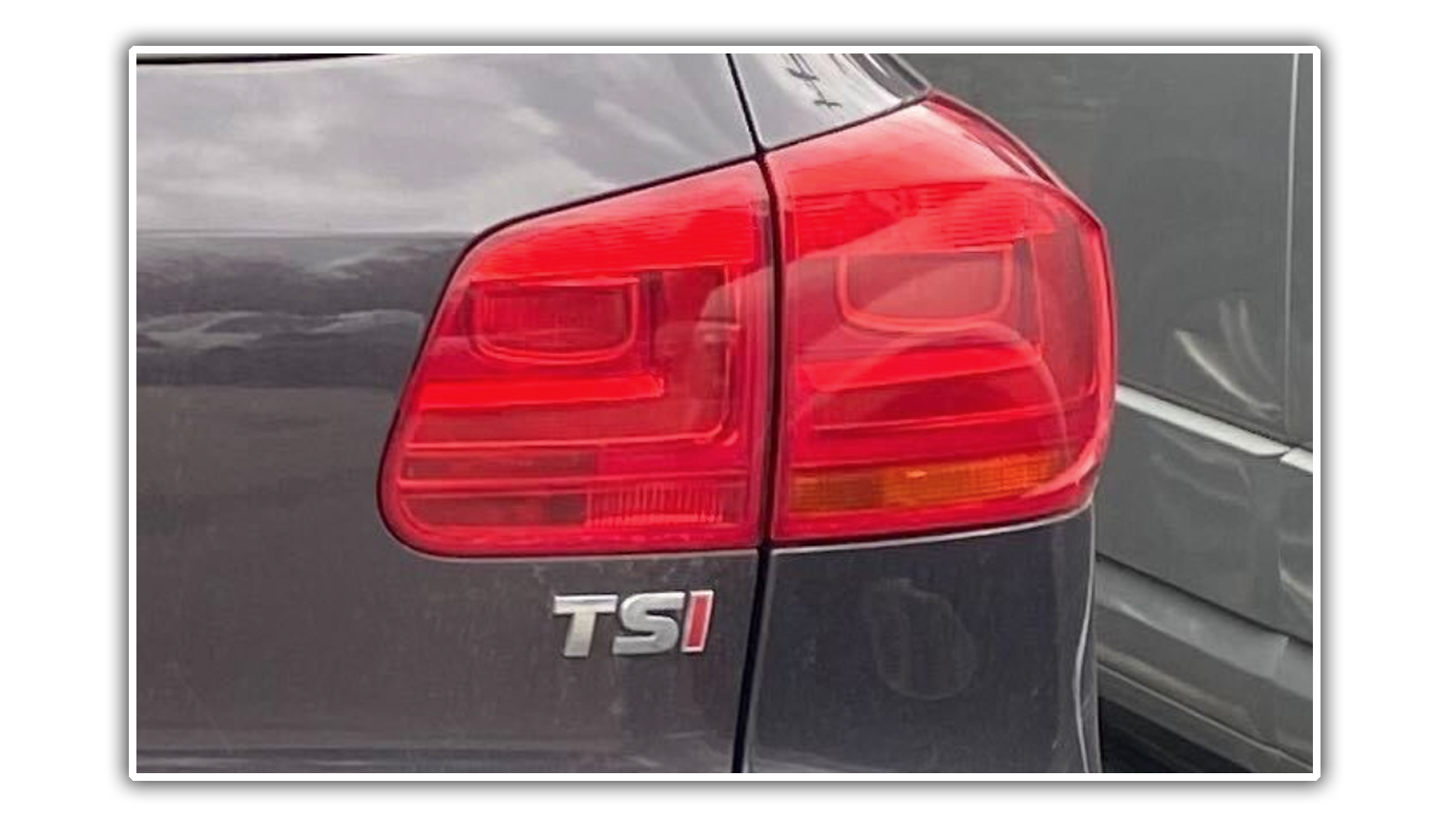 Okay, nothing seems too weird there, right? Well, I’m sorry to break this to you, but that taillight is lying to you. Here’s why: 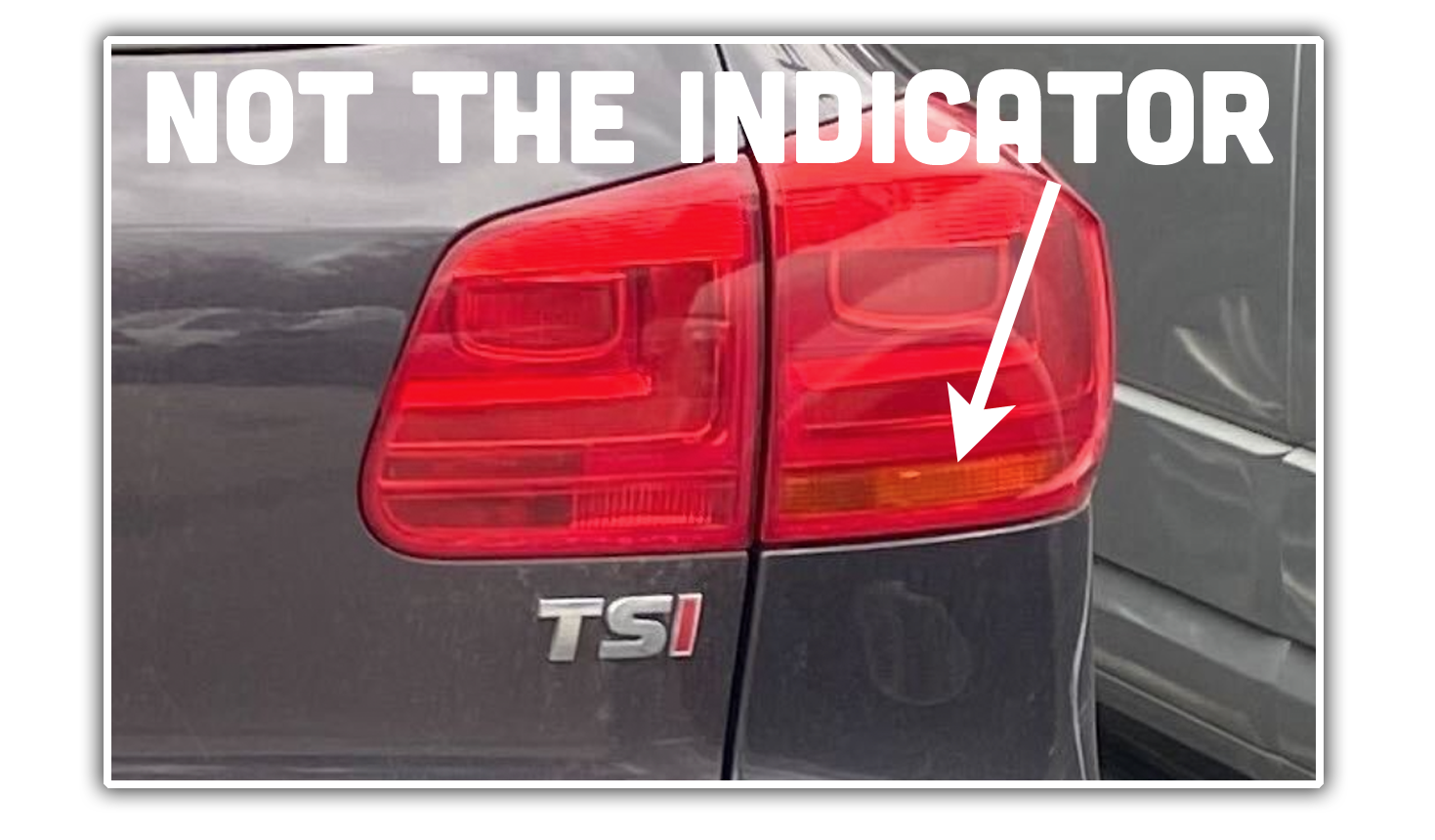 Yes, much like those famous Chevy Vega lying rear amber indicators, the amber section there is not the turn indicator; rather, the red section just blinks, and the amber bit sits there, inert and deceptive. This is because the rules for American-market cars dictate that a rear turn indicator must have at least 7.75 square inches of area to illuminate; in Europe, the size is much smaller.

So, the indicator area was designed for European regulations, which was too small for American regs, so instead of, you know, actually doing anything about this, VW just thought, screw it, and made the tail/brake light area flash (like a ’74 AMC Gremlin did) and left the lens in place, with its deceptive patch of amber.

Okay, we can all see how this kinda sucks, but I’m sure we can also understand the fundamental motivation: it was cheap. VW didn’t care enough to spend money on a new lens, so it just did the absolute minimum theyit could get away with and called it a day.

The other deceptive Tiguan taillight is actually far more confusing because I can find no rational motivation for it at all. The light I’m talking about was the original Tiguan taillight, pre-facelift, used from 2007 to 2011. It looked like this: 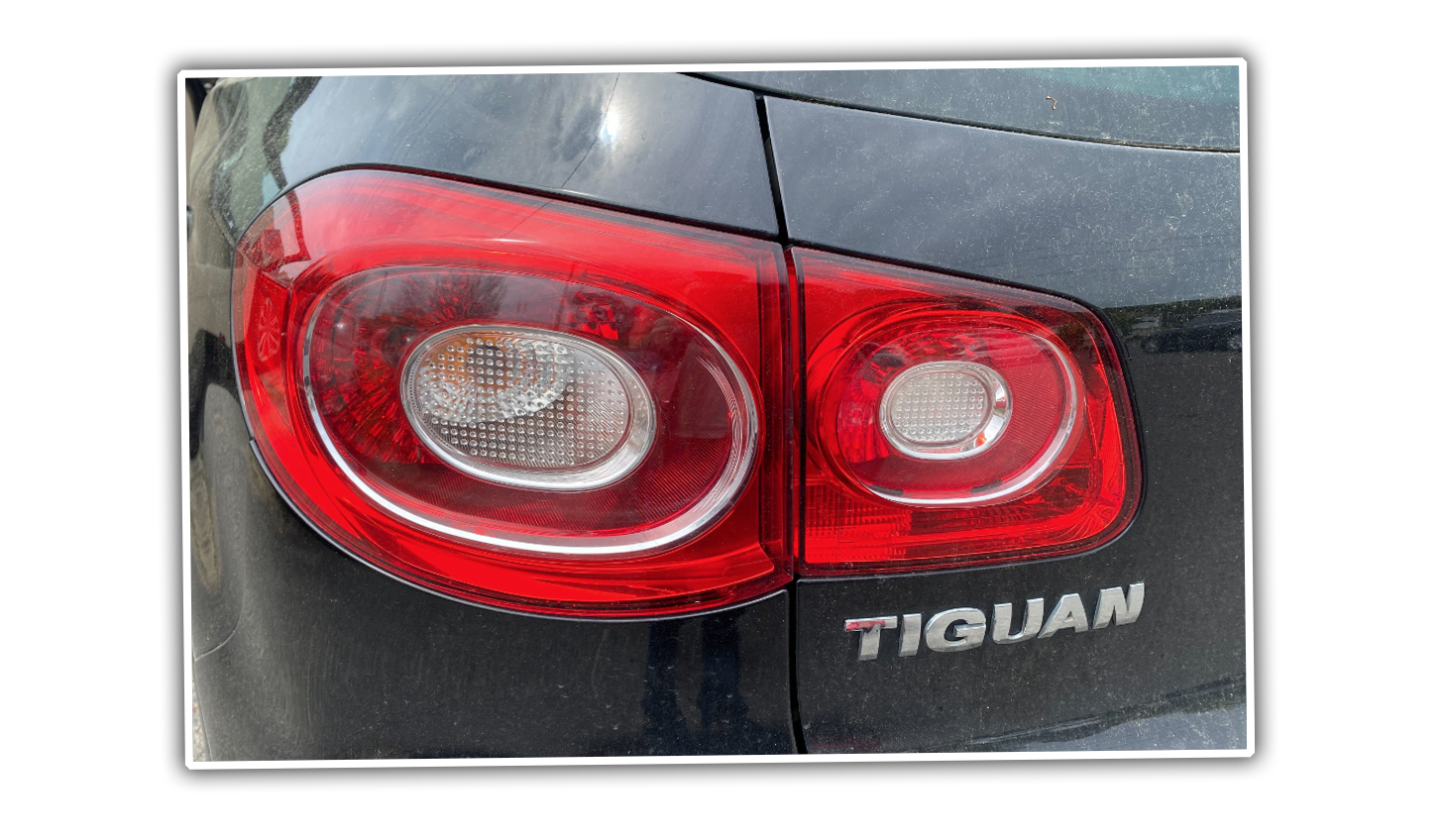 Now, I know what you’re thinking (because your COVID vaccine tracks that and sends your thoughts to me via text messages). You’re thinking, “Jayjay, you jackass, you miserable simpleton, what’s wrong with those taillights? They clear and bold and vivid, with red rings for brake and tail, and inner sections for turn indication (on the outside, with an amber bulb) and reverse on the inner ovoid shape! What could be more perfect?”

Well, friend, I’m here to let you know that the Tiguan has lied to you, again, though technically this one was the earlier time. 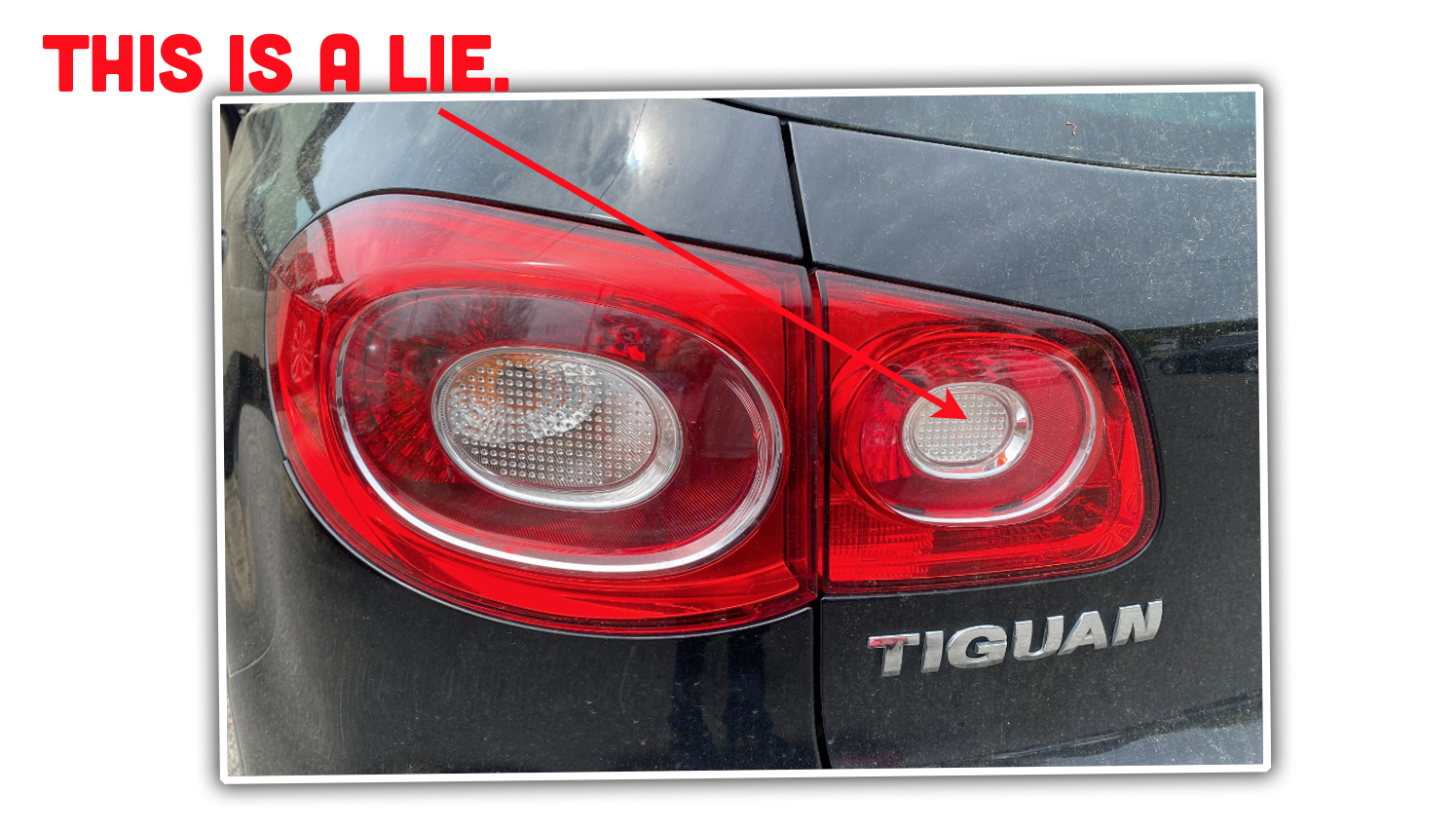 That reverse lamp is not a reverse lamp: it’s just some bit of silvery reflective plastic. The real reverse lamps are down in the bumper here: 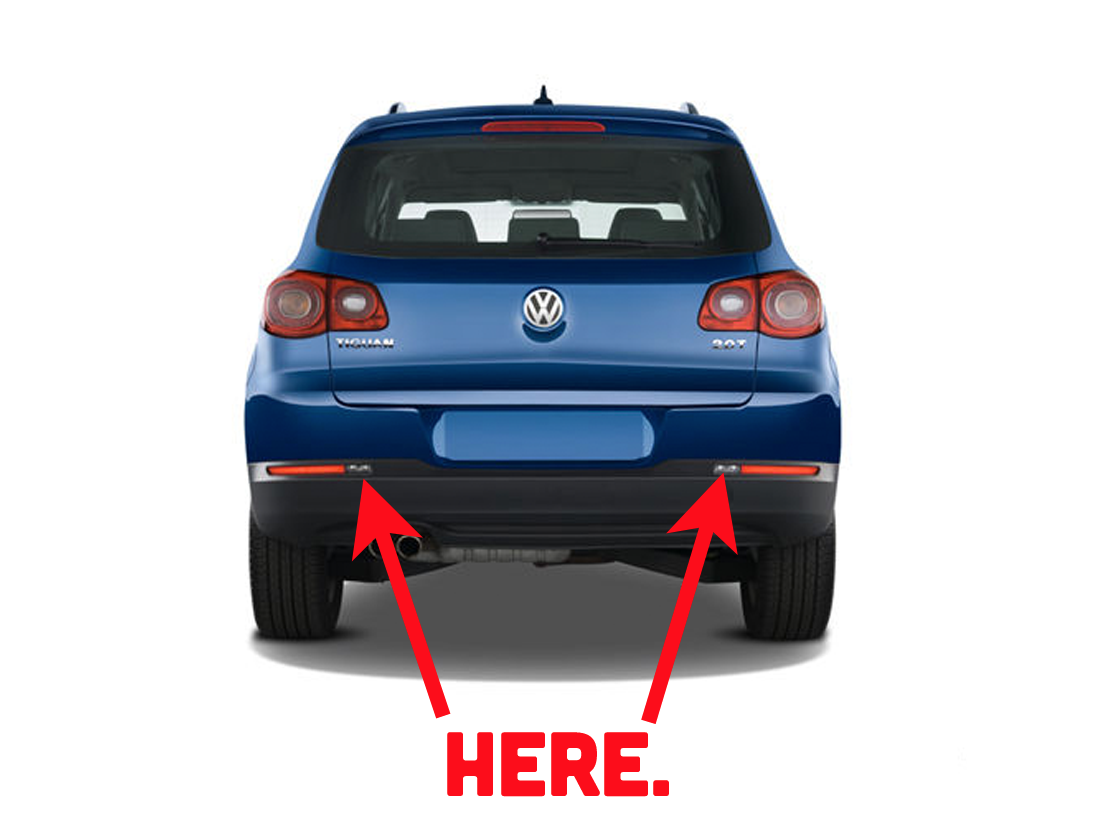 Now, here’s the real question: why?

Yes, why? Why would VW have made this decision? What would they stand to gain? I don’t get it.

I mean, they’re not the first to fake a reverse lamp, but the last time that happened with any degree of regularity was in the Dawn of Reverse Lamps — 1950s America. Then, it wasn’t that uncommon to see cars that offered optional reverse lamps and would sometimes plug the holes of buyers too cheap to care what was behind them at night with little, usually shiny filler panels like on the 1955 Ford Thunderbird: 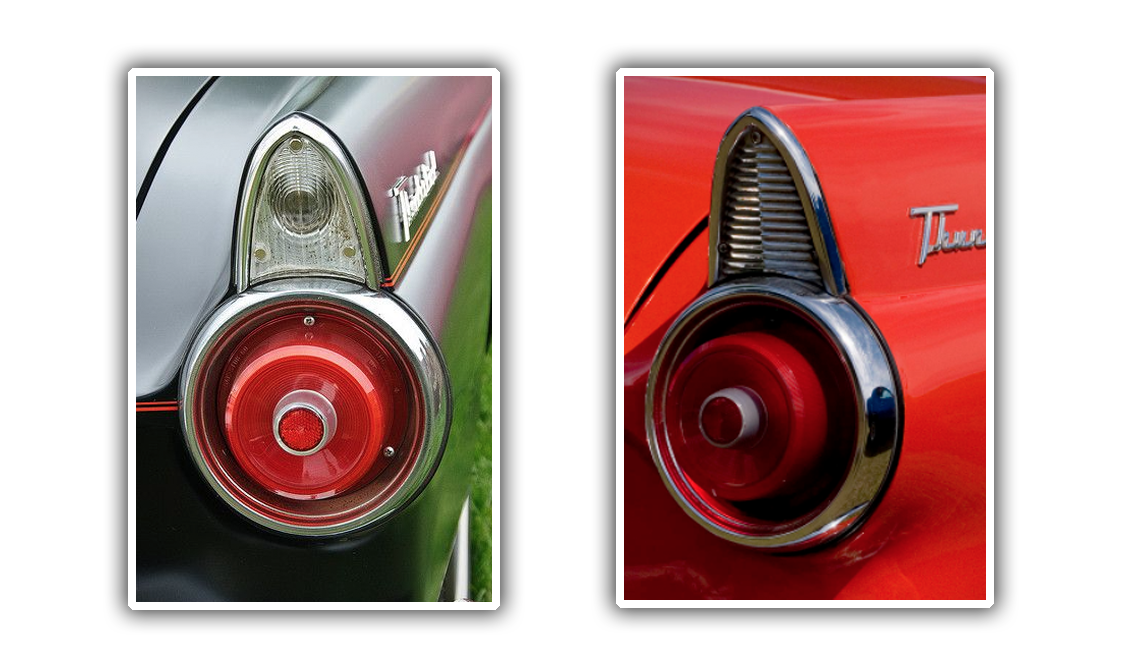 See how The left one has a real reverse lamp lens, and the right one just has a ribbed aluminum panel to fill the hole? This sort of false reverse lamp makes more sense, because at the time it was an option, and you needed a way to deal with its absence.

But on the Tiguan, a car from over half a century later, a reverse lamp was mandatory. VW had to include at least one, so why the hell would the company design a taillight unit with places for reverse lamps, but then instead install fake ones, only to make a whole other set of them in the rear bumper?

You might think it’s because of regulations about lights being visible if the tailgate is open, since the location of the false reverse lamps are in the tailgate. But the problem there is that there’s no requirement for reverse lamps to remain visible with the tailgate open, in Europe or America! 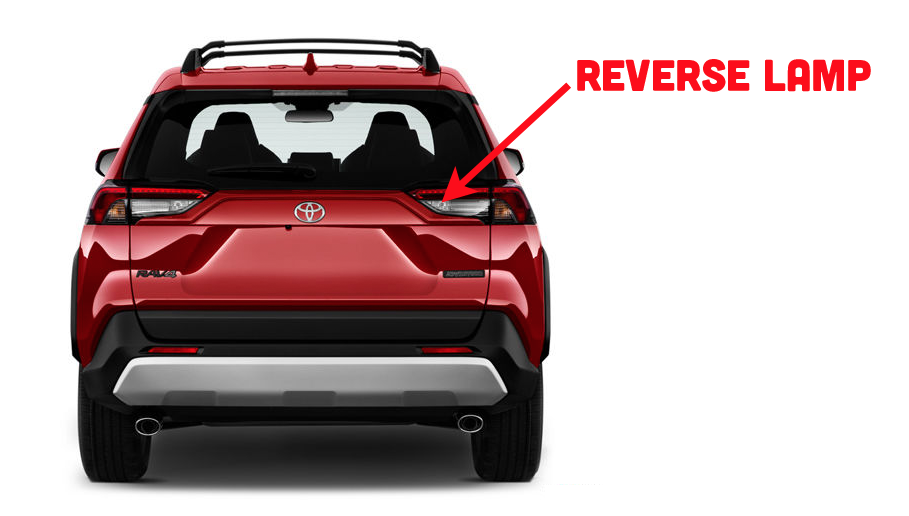 As you can see, the reverse lamp is on the tailgate, and there’s a billion of those things on the road, breaking no lighting laws. 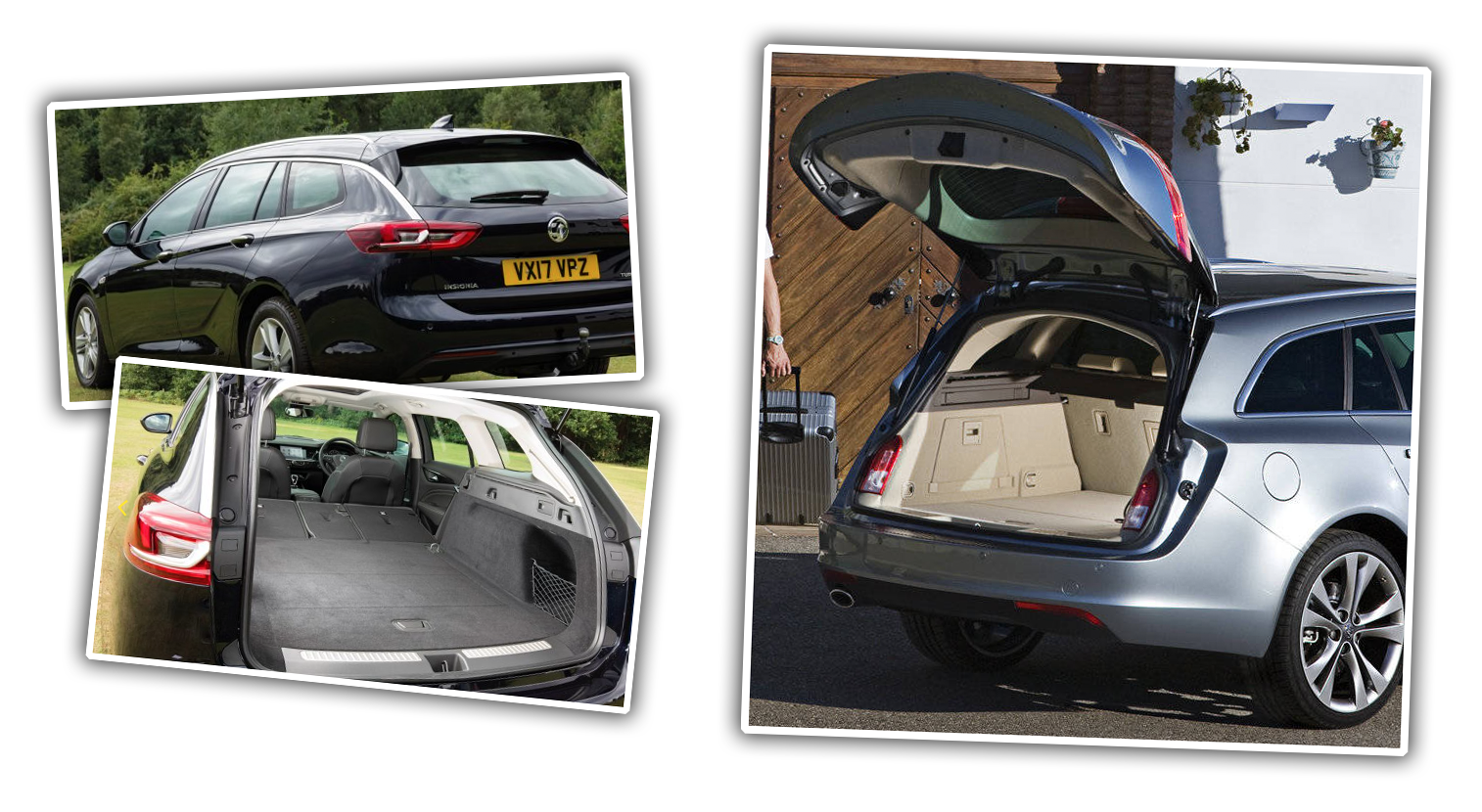 And, if we look at these Vauxhall Insignia Estates, we can see that the generation that had all the lights move with the tailgate only had to have auxiliary brake/tail and turn lamps mounted on the inside, and the later Insignia kept the brake/tail/turns on the body, with just the reverse lamps illuminating the heavens with the tailgate open.

So, again, I reiterate: VW DID NOT HAVE TO DO THIS.

Just take a moment and think about the sheer madness of these first-gen Tiguan taillights. Imagine a conversation with the lighting designer and some VW product planner:

TIGUAN PRODUCT PLANNER: So, tell me about these taillights you designed for our new compact crossover!

LIGHTING DESIGNER: You’re going to love them! Look at these evocative ovoid shapes! The dazzling clarity of the plastics, the grid-like light diffusers, the subtle amber bulb! It’s my triumph! My masterwork!

TPP: Yes, yes, I see. It is achingly beautiful.

LD: And here’s the best part! See this, right here, this whitish/silvery ovoid?

TPP: But…why? If you wanted them in the bumper, why the false reverse lamp in the main light unit? I don’t understand?

LD: NOBODY UNDERSTANDS BUT ME! ME! (Lighting Designer then throws smoke bomb and runs off, never to be seen again)

So, fundamentally, I do not understand these lights. The later update is a liar of a lamp, sure, but at least the motivation is understandable: cheapness. The original lamp, however, defies all logic. Even if we just accept that the style desired for the light required that inner clear ovoid, that doesn’t explain why didn’t they just make it the actual reverse lamp.

I can’t with all this, I just can’t. How can I maintain the illusion of the basic competency of the adults that run the world when this is the sort of thing produced by one of the world’s largest automakers, from a country renowned for its technical rationality? The very existence of these Tiguan taillights should make any rational human question the very fabric of organized society.

God help us all.

I'm a co-founder of the Autopian, the site you're on RIGHT NOW! I'm here to talk to you about taillights until you cry and beg me to stop, which I absolutely will not. Sorry. Hug? Also, David's friend.
Read All My Posts »
PrevPreviousThe Man Who Helped Create The Industry’s Toughest Crash Test Survives It In The Real World
NextHere’s How Much A 1966 Ford Mustang Weighed When I Put It On An Industrial ScaleNext