I think it’s safe to say that pretty much everybody who is at least somewhat interested in cars is very aware that at almost every major chain drugstore in America, you can find a surprisingly large selection of interesting and even unexpected 1/32 scale die-cast cars. We at the Autopian will be investigating these in more detail soon, but for now I’d like to take a moment and turn a few of these cars over to see just how much attention was paid to their undersides. Because this is important — now more than ever. Let’s get to it.

The cars I picked to inspect are ones that I can talk about with some authority (Volkswagen Beetle and Bus) and one our own David Tracy can speak to authoritatively: A Jeep Wrangler JL. Let’s start with that staple of the drugstore die-cast car displays, the Volkswagen Beetle: 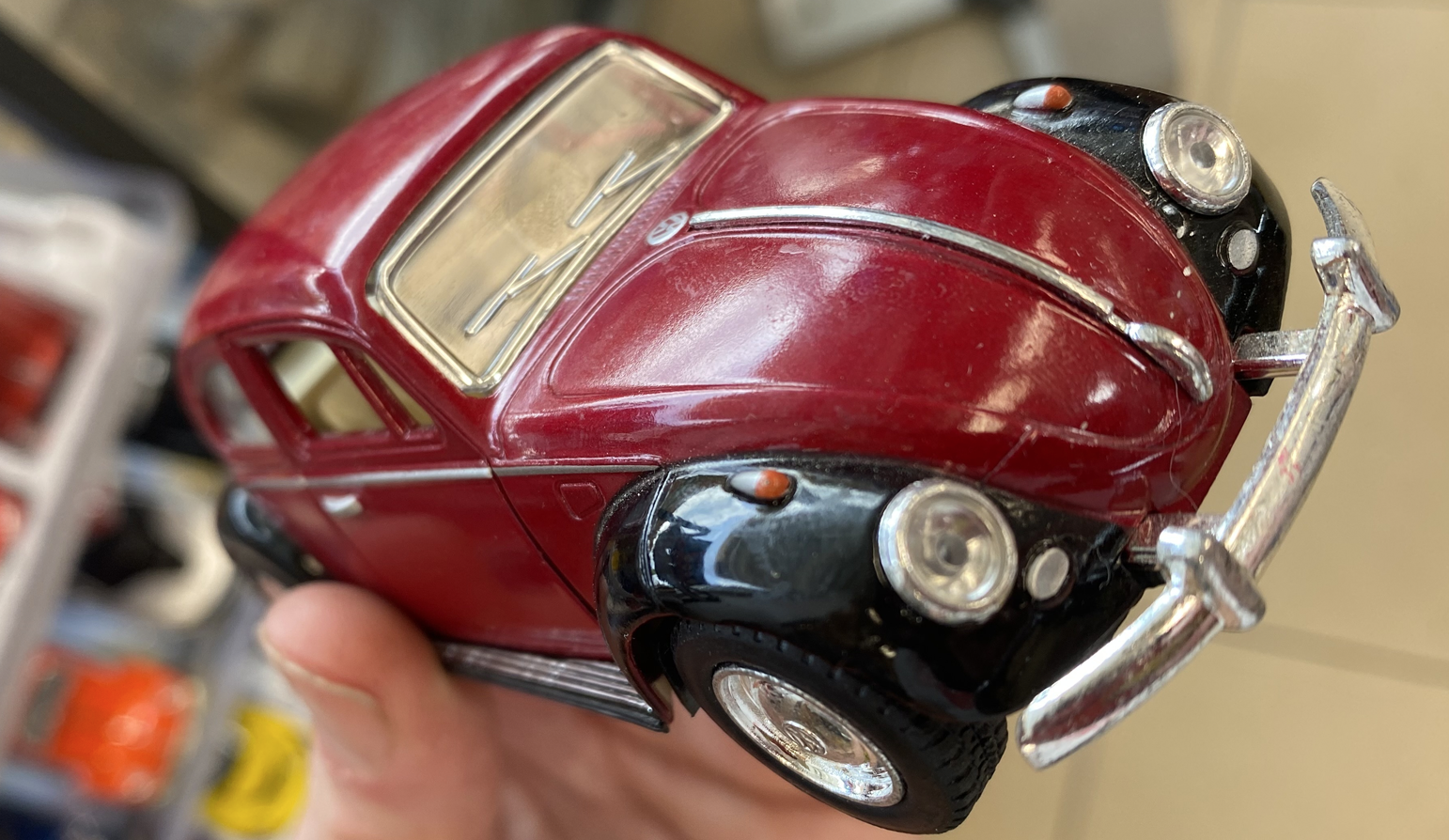 These show up in a wide variety of colors, and there are a few different models of Beetle — some more cartoony, and some, like this one, a bit more accurate. They’re often covered with decals or in two-tone paint, like the one in my hand there. 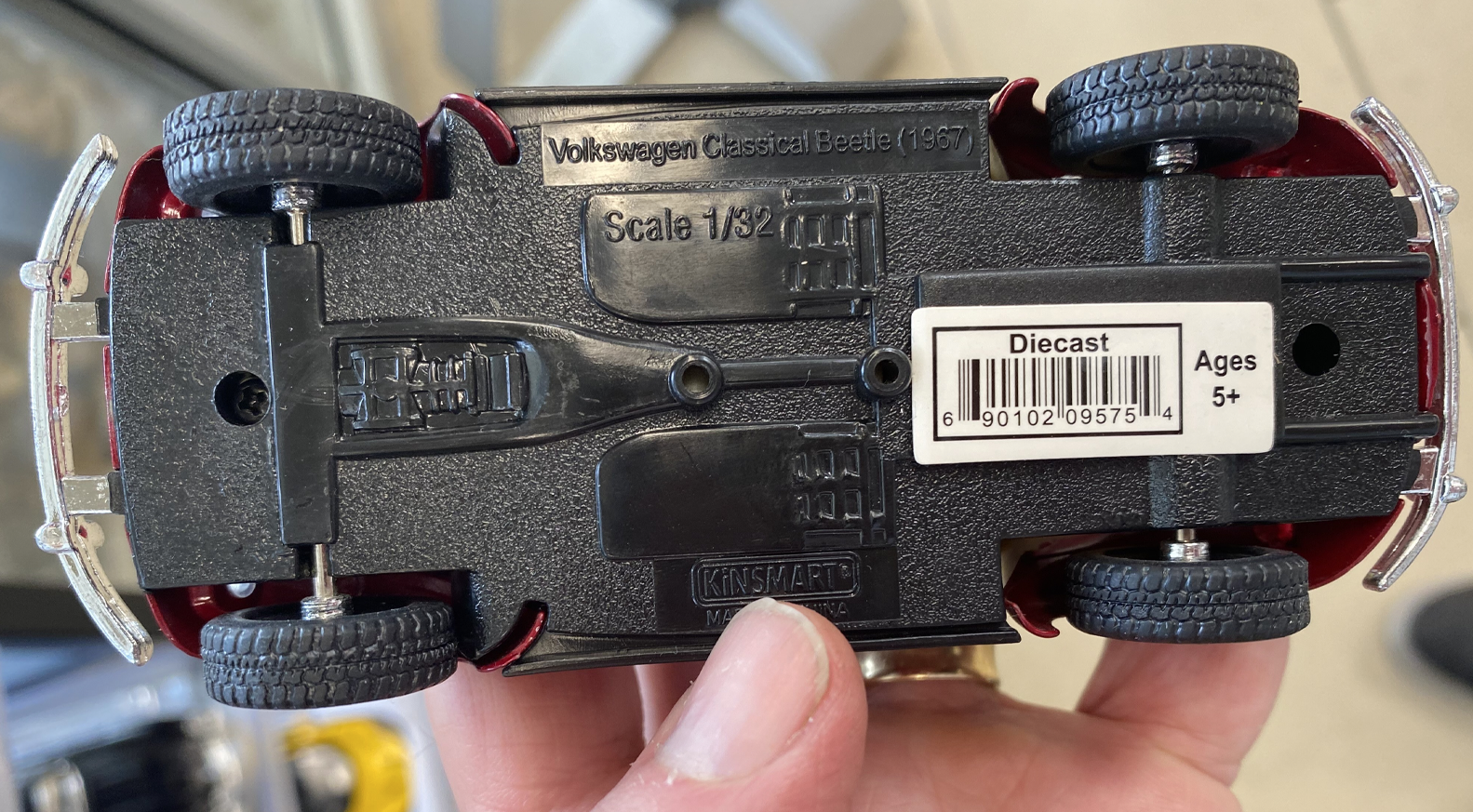 The underside of the Beetle provides some interesting information. They call it a “Classical” Beetle, which brings to mind swelling scores from Beethoven or perhaps some toga-clad ancient Romans tooling around in their marble VWs, but I think they just mean “classic.”

They also specify it as a ’67, which they get generally right, but only if we’re using Euro-spec Beetles as a guide. In America, this would need more upright sealed-beam headlights and bumper overriders and tacked-on reverse lamps, but if we accept that it’s a Euro-market car, I think it’s close enough. Whoever made this toy got the one-year-only engine lid correct, at least.

As for the detailing on the bottom, it’s actually very interesting, because while it’s wildly inaccurate, whoever designed it was very clearly looking at some correct sources, they just kind of mixed things up. Here’s what I mean: 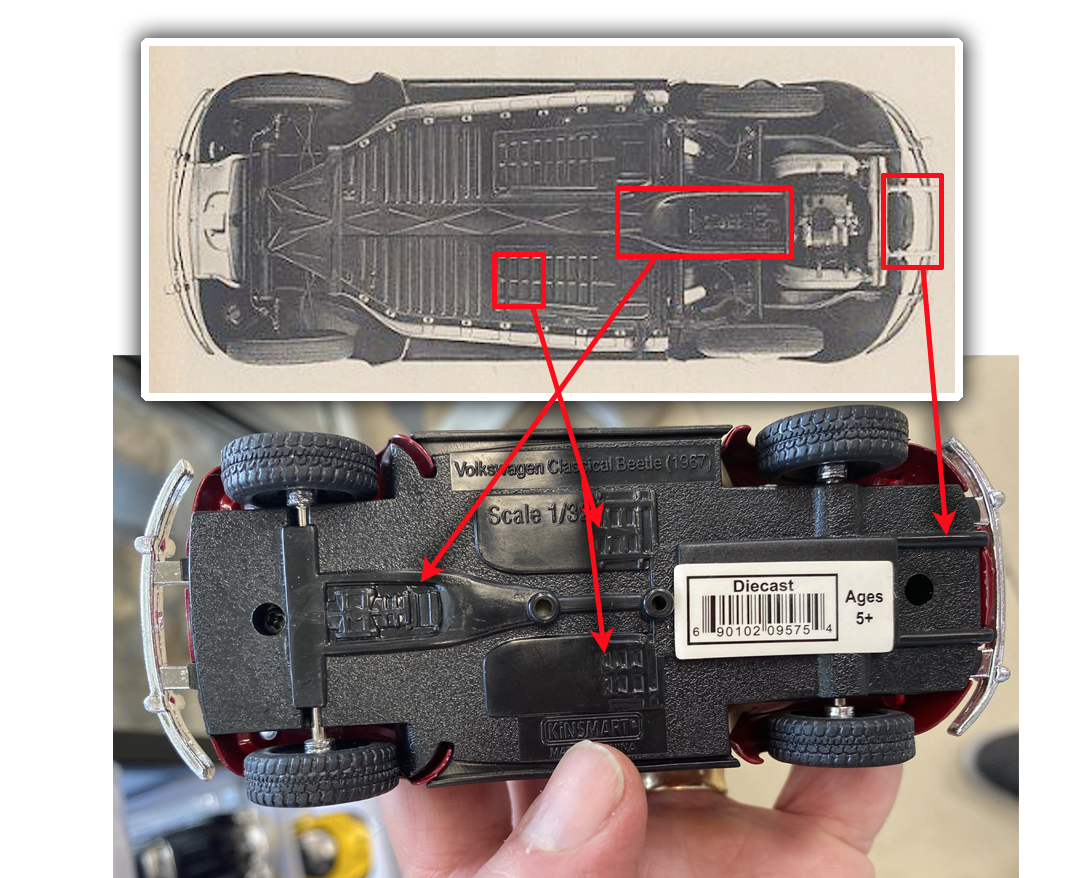 Up top there is a picture of the bottom of a Beetle, from one of VW’s own ads. And it’s clear that whoever made this used a similar source, because there are strangely accurate parts, like the backbone frame “wishbone” that cradles the transaxle, which itself is rendered quite well in the drugstore car – except that it’s flipped 180° and is now at the wrong end of the car (the front of the toy car is on the left), trying to drive the wrong wheels.

The stamped rectangle reinforcing rib pattern of the floorpans are replicated as well, at least in part, and in sorta the right places in the middle, kind of, and an attempt to show the twin exhaust pipes at the rear is present as well, even if those pipes don’t connect to a muffler or even an engine, unless the actual spring-loaded mechanism under the sticker counts. And if it does, that transaxle is still in the wrong place.

It’s such a strange mix of accuracy and inaccuracy! Let’s see how the toymaker did with this other drugstore car MVP, the Microbus, which is usually covered in hippy-lite decals: 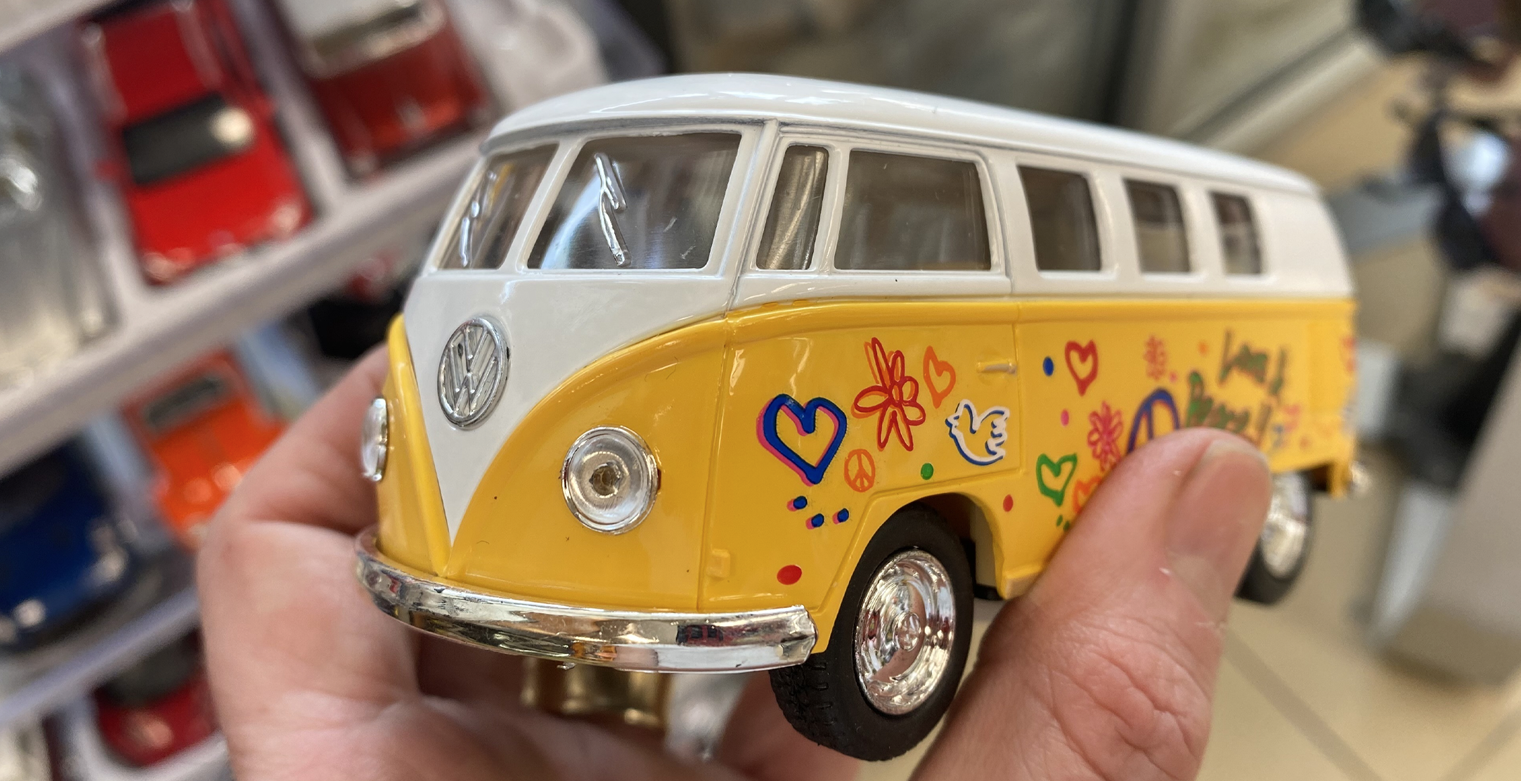 It’s missing any sort of indicators, which drives me a tiny bit mad, but that’s not why we’re here. Let’s flip it over (note: the front is on the left) 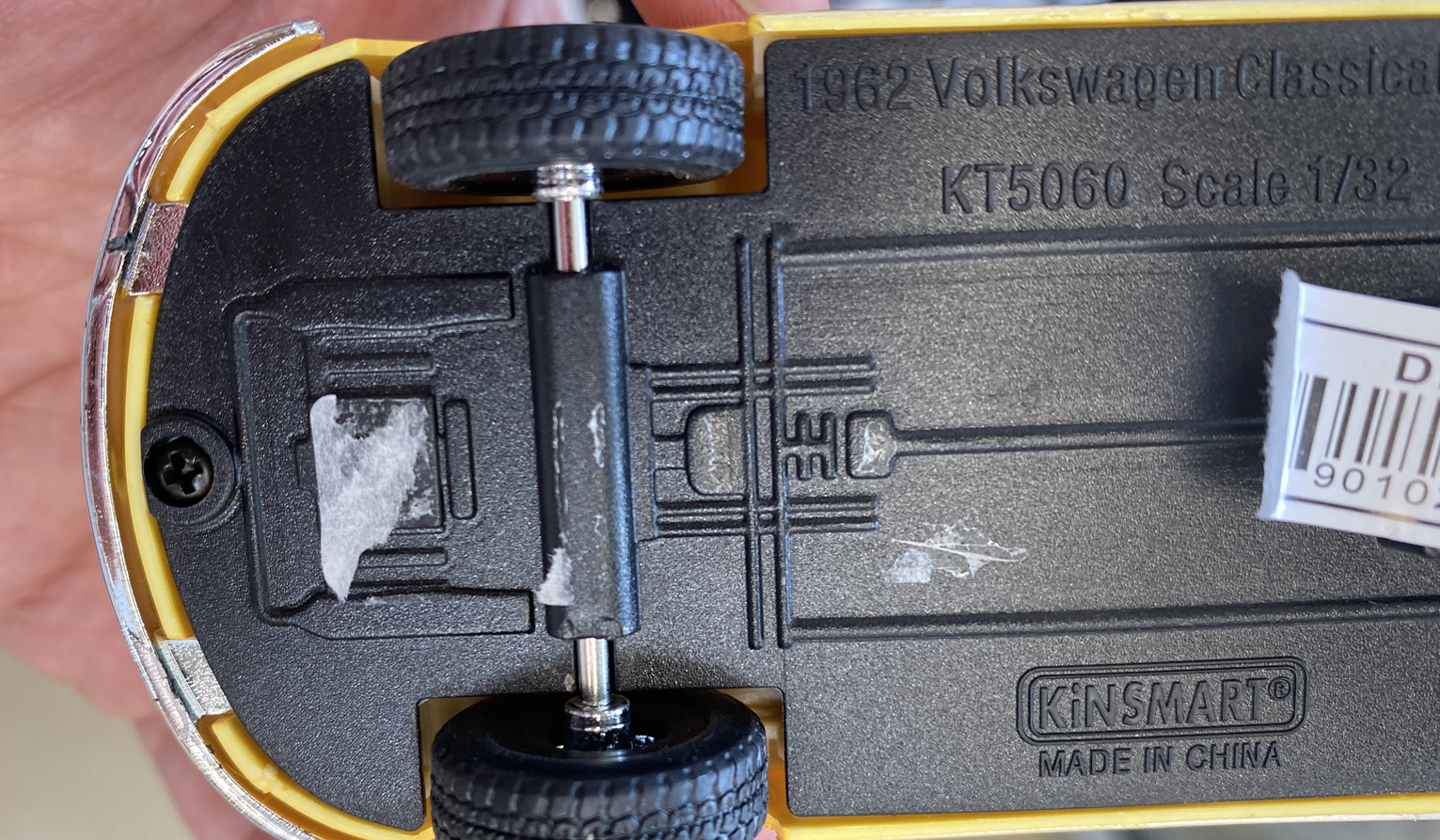 This Bus had no detailing at the rear, other than the rectangular hump of the spring-loaded motor, but the front had some interesting molding. It has a similar issue as the Beetle: clearly, some attention was paid, but there are also some huge inaccuracies.

Most glaringly, that is clearly a Type I air-cooled engine underside I see there, complete with mufflers and heat exchangers, but it’s at the wrong end of the Bus! And behind it I think is supposed to be the transaxle, just highly stylized here. 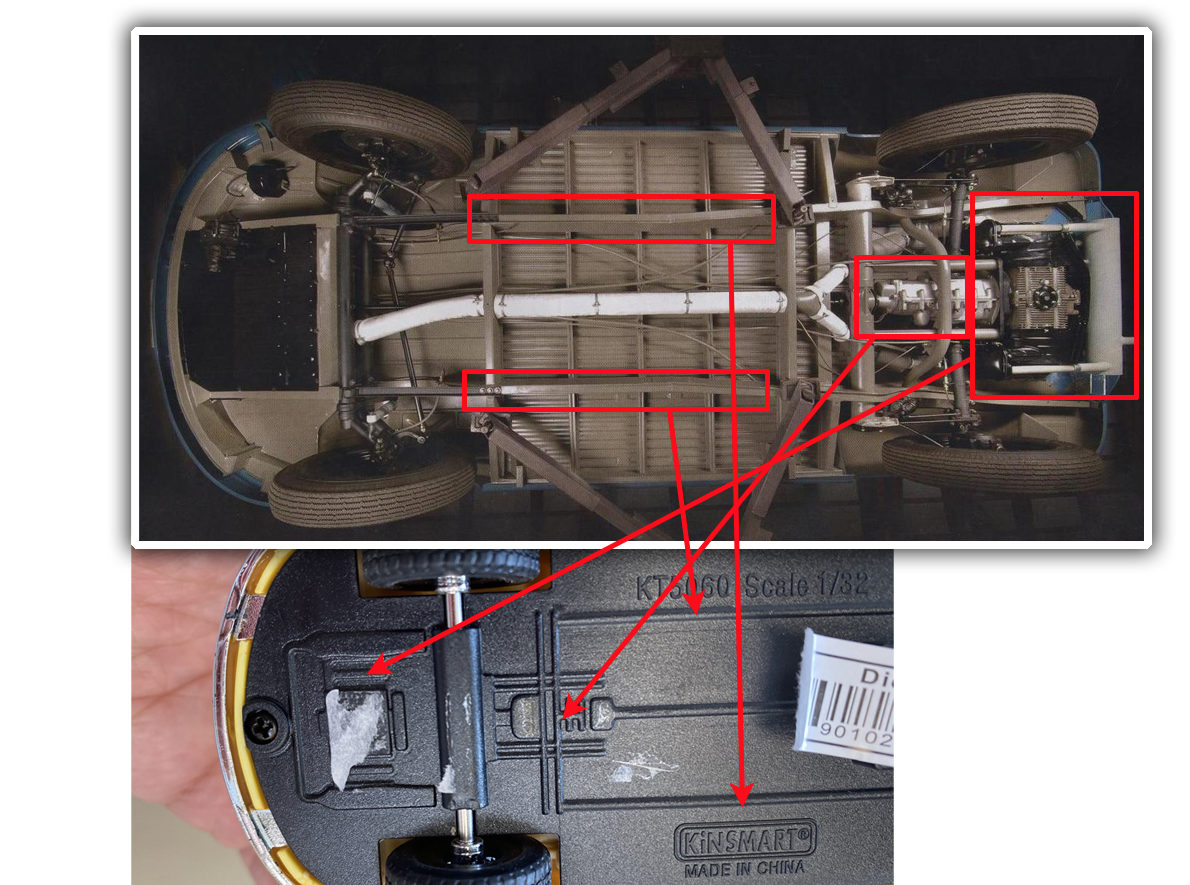 I guess we also have some of those frame rails in there, too. Again, though, it’s like the designer glanced at some VW underside pictures and just chopped out some bits and stuck them wherever.

Next we have this Jeep Wrangler JL, and for this one I’ll hand off to David: 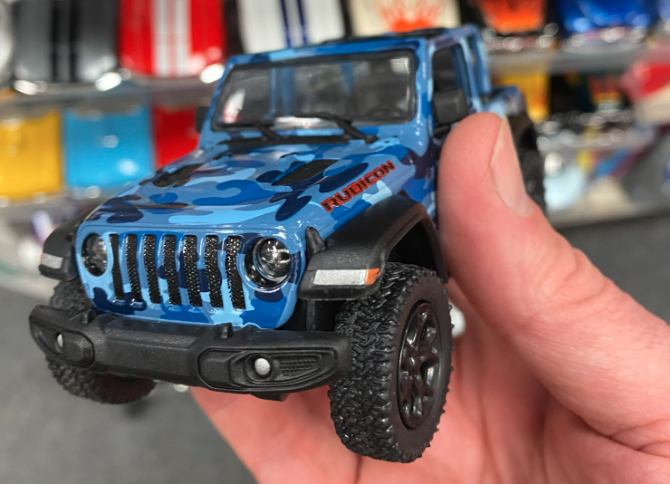 [Hi, it’s David here. First, allow me to give a little bit of credit to whoever designed the underside of this car, because I’m about to eviscerate them, and a bit of praise as an appetizer seems merciful.

Looking at the Jeep JL Wrangler’s underbody, you’ll see that the model got the rear muffler almost exactly right. Kudos! Also, the general shape of the front and rear frame rails seems right, too. Plus, you can see the rear four-link suspension is right (two upper control arms, two lower), and you can see that up front, there are some control arms facing forward off the inboard side of the frame, just ahead of the crossmember (which itself is in roughly the right location). Also, I have to applaud whoever chose to have the front differential offset to the driver’s side; that’s exactly right. 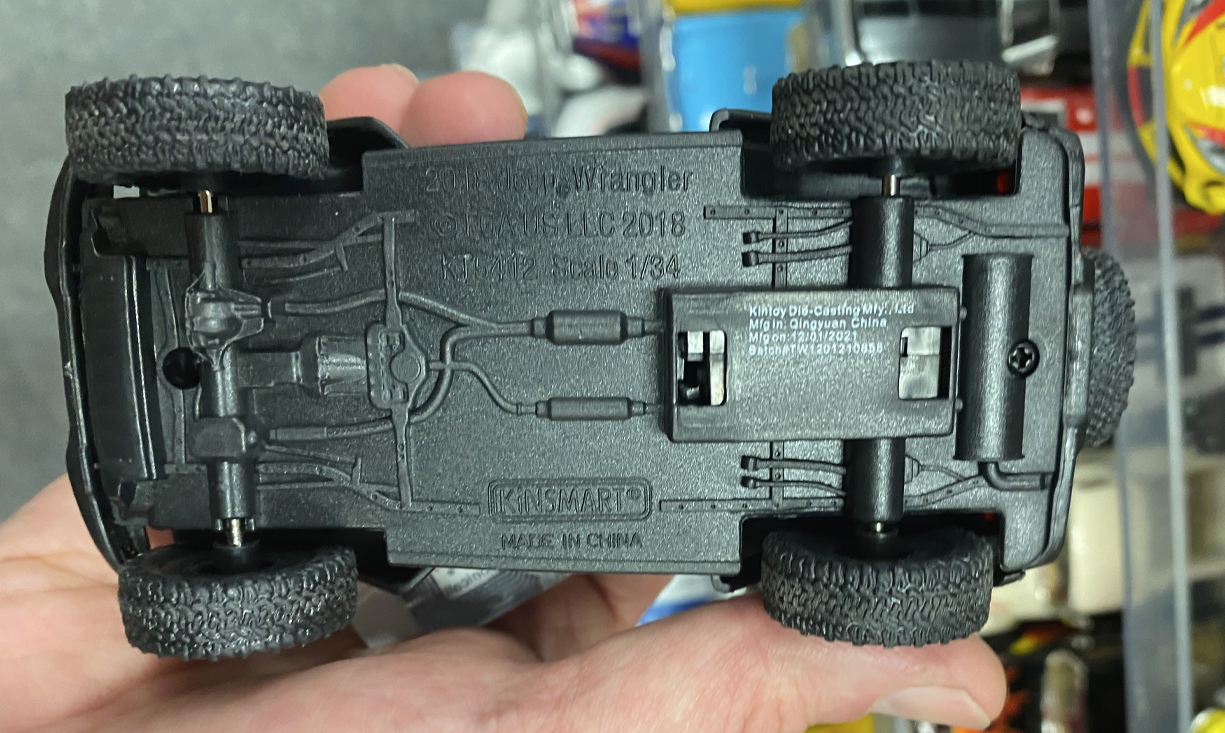 But damn near everything else about this model is horrendous. I mean, is that a front driveshaft made out of exhaust tubing and flowing into some kind of muffler or catalytic converter? Seriously, why would a driveshaft not be straight; do you realize how horribly that would shake? Oh wait, it wouldn’t, because it’s not attached to a freaking transfer case — it’s hooked to a damn muffler!

Seriously, what the hell? What’s even more bizarre is that there’s a second, entirely different exhaust pipe that comes out of the transmission (?) sitting on that crossmember; how does that make any sense?

Worse, you know that rear suspension that I applauded for being the right four-link type? Look at how it’s attached to literally nothing at the front. How’s that even going to work? Those suspension arms are supposed to be bolted to the frame; but instead, on the model, they’re just floating inboard!

There’s no gas tank, there are no non-exhaust driveshafts, there’s no transfer case, there are no steering parts — this model is a disgrace, and anyone who buys it for their children, just know this: You’re not helping them learn how cars work.

In fact, if you find your kid walking into a car parts store and telling the clerk their vehicle has a “V-4 engine,” just know that it was your fault. (If they own a Ford Taunus or Saab Sonett, then that’s different and you should actually be proud). -DT]

Okay, I’m back. Honestly, these designers really didn’t have to do anything at all on the underside of these, or they could have used a generic one, so I’m sort of impressed that these have any individuality at all. That said, I feel like if they put in the bit of effort they seem to have, then they should have just gone that little bit further, and just tried to give a little more of a shit. They were so close, in many ways, after all!

These are just the ones we could do easily off the top of our heads; we’ll do some research and do more of these in the future, so stay tuned!

I'm a co-founder of the Autopian, the site you're on RIGHT NOW! I'm here to talk to you about taillights until you cry and beg me to stop, which I absolutely will not. Sorry. Hug? Also, David's friend.
Read All My Posts »
PrevPreviousThis Bizarre Cyclecar Seems To Have Been The Only Car Ever That Shifted Gears By Moving The Engine And That’s Just The Start Of The Weirdness
NextCold Start: We Should All Just Be Buying E93 M3s By The DozenNext