I’m not really certain what it says about me, but the cars that tend to interest me the most are ones that most serious automotive enthusiasts would arrange to have towed off their property immediately. They might even sow salt into the ground below where those leaky cars once sat, just out of contempt. Whatever my core motivation is, it has lead me to this ancient, gleefully crappy French proto-cyclecar called the Bedelia. It’s fascinating collection of automotive bonkersness crammed together in a dangerous-looking shell, and nobody but you is willing to listen to me talk about it, so get ready.

In case you’re not familiar with cyclecars, let’s sort that out first. In the nascent days of private automobile ownership — in the later 1800s and early 1900s — cars were still very much a rich-person’s thing. But that didn’t mean that all the non-loaded folk didn’t want cars, and want them badly. Of course they did. Just like all us poors today want them. People are always people. 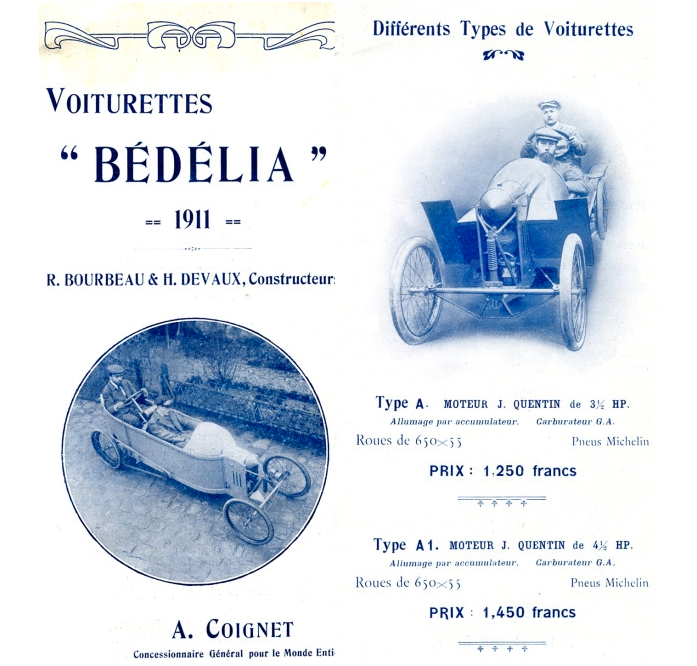 At this early stage of automotive development, the only real way to make cars that would be cheap enough for people who didn’t carry around big gray sacks with “$” on them was to distill down cars to their absolute barest essentials: motor, wheels, someplace to sit. This is essentially what cyclecars did. They were made using motorcycle and motorbike parts, and they ignored silly concepts like “safety” or “comfort.” As a result, they got people motoring along for not much money, at least until cars like the Ford Model T and Austin 7 came along and brought “real” cars to everyone. 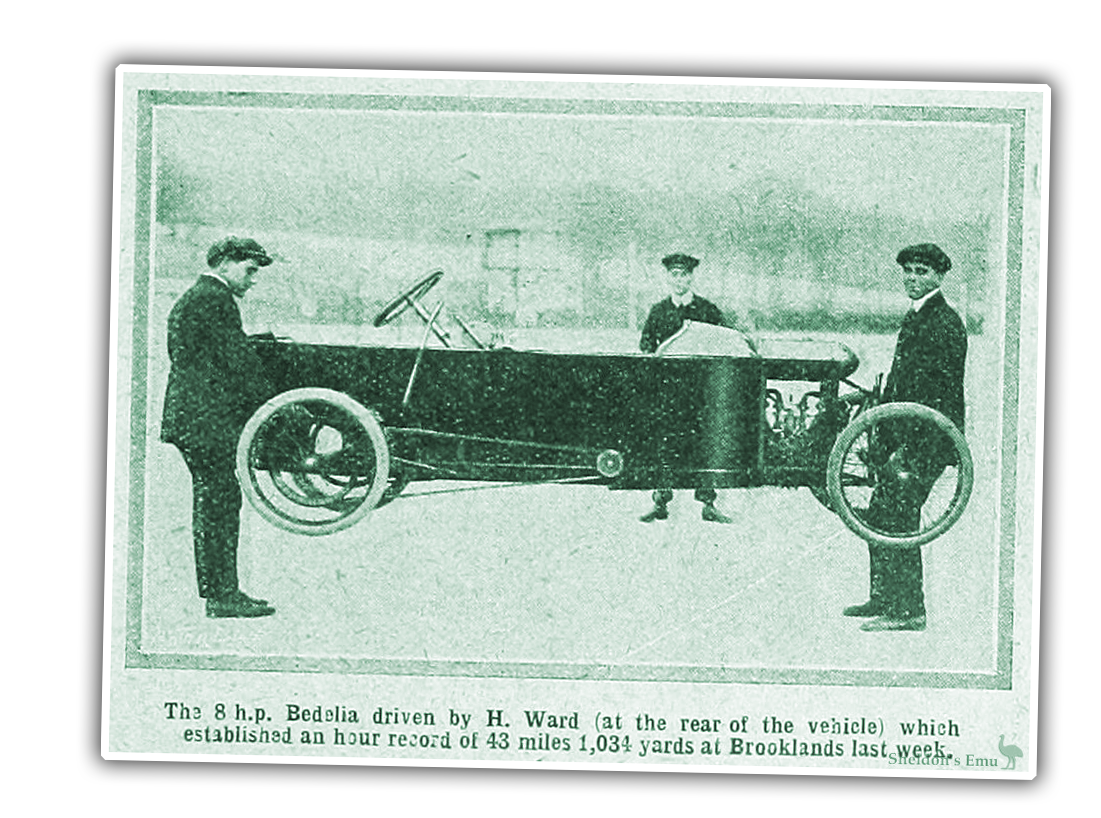 In France, around 1910, one of the first people to really understand this formula (cheap cars are made not by scaling down expensive ones, but by re-purposing cheaper motorcycle parts and lots of less of everything) was a man named Robert Bourbeau. The reason his car came into being at all was unplanned: Borbeau had wrecked his motorbike, and he and his friend Henri Devaux decided to use the parts and whatever else they could find to build something new and better. The Bedelia was the result. 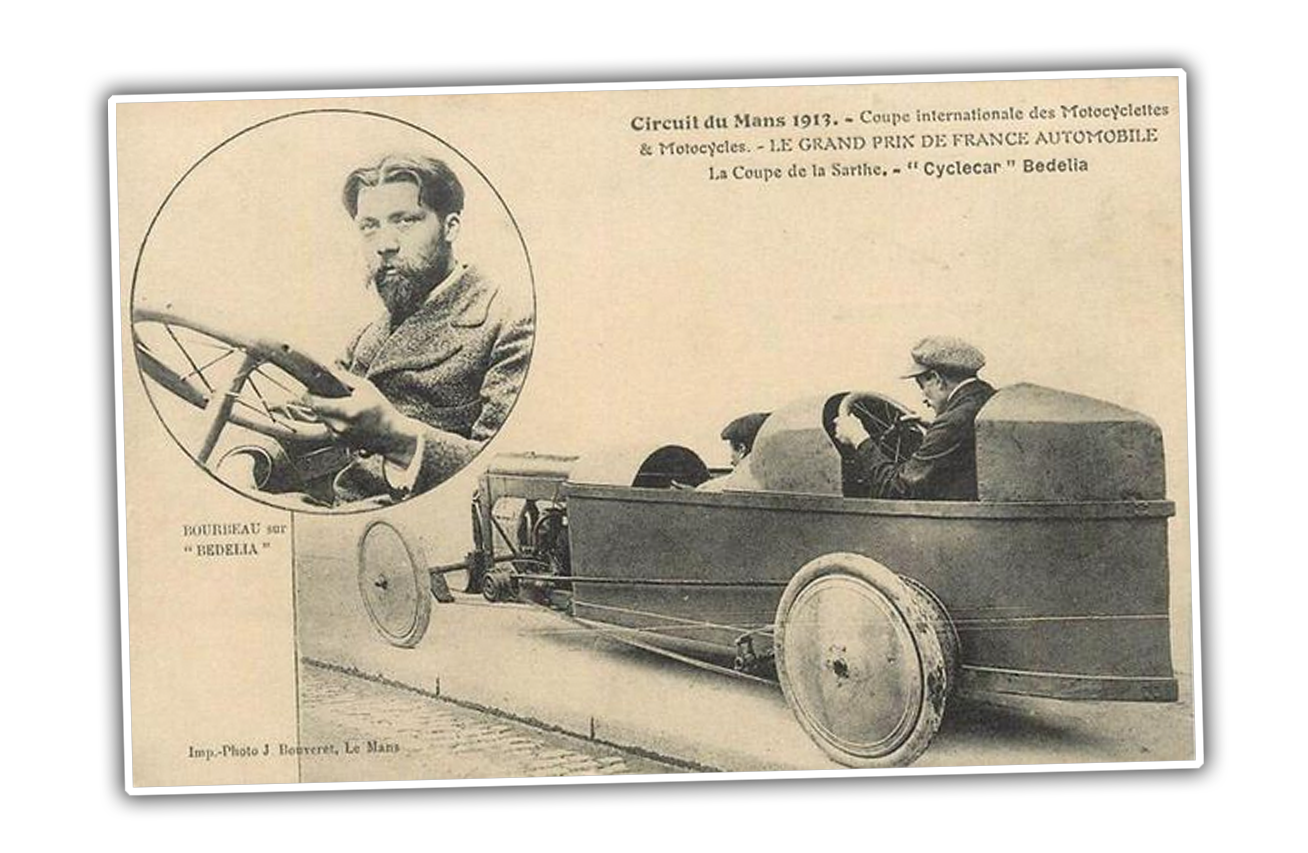 There’s Bourbeau and an early Bedelia in the photo above; you can see what crude machine it was. Bourbeau never really planned on commercializing his creation, but it says something about the amount of interest in affordable cars that he found demand to be high enough that actual production made sense. Bourbeau and Devaux became France’s first real cyclecar builders around 1910, which makes them one of the earliest cyclecar makers anywhere. 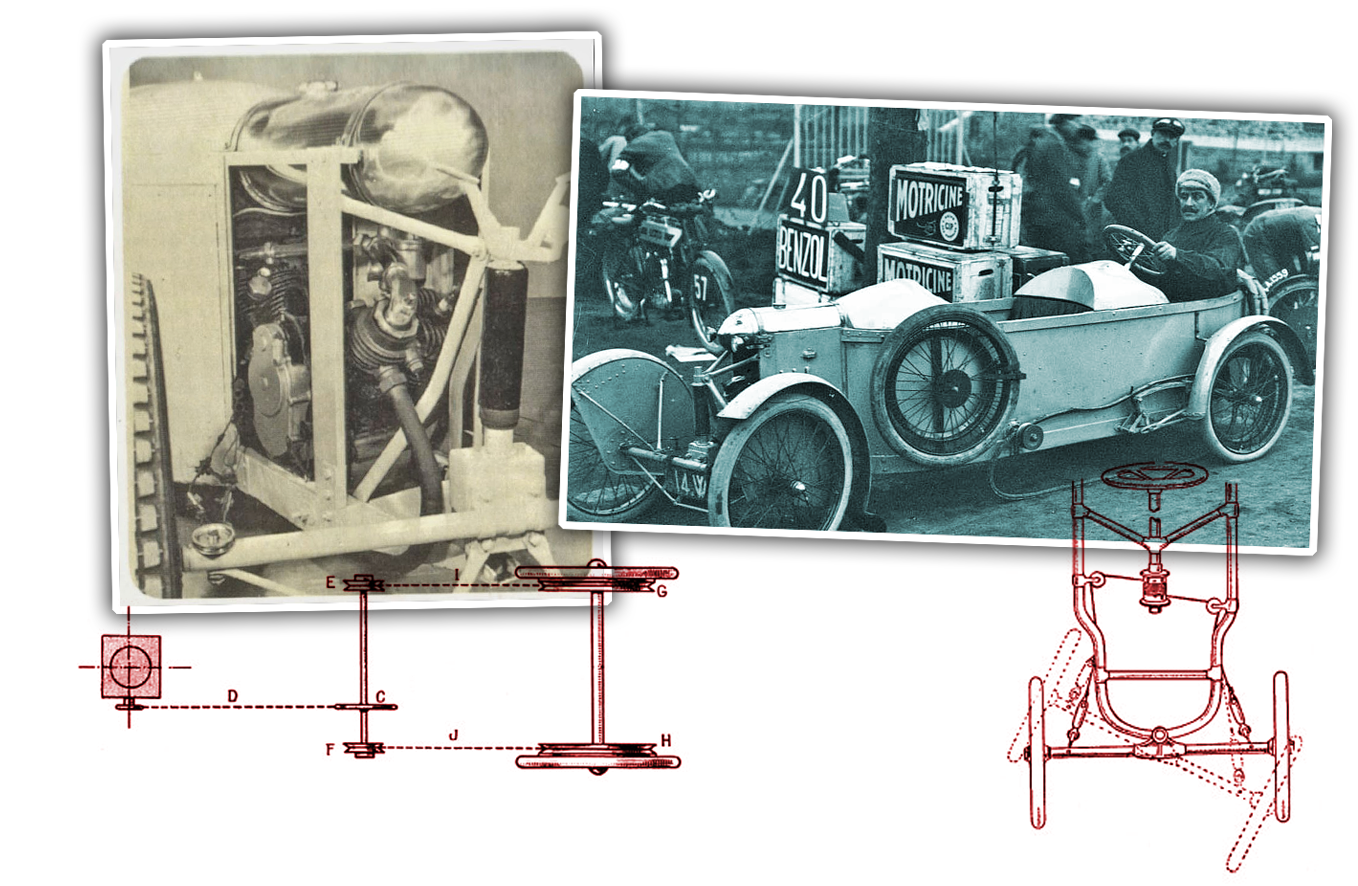 There are so many fascinating and deeply strange things about the way the Bedelia was put together. First, look at the steering setup right shown above, on the lower right: the axle just pivots at the center. This is a pretty miserable way to steer a car, but with only about 10 horsepower available, you probably won’t end up dead.

Next, note that the driver sits at the rear, which is odd, but does show up in very early cars like this every now and then. What makes the Bedelia weirder is that on early versions, you actually needed a passenger to drive, because they were required to help shift gears! 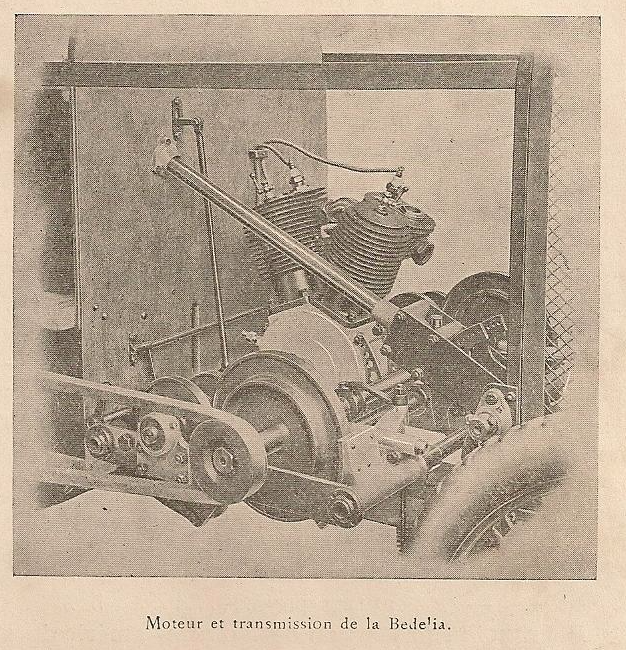 Well, “gears” is generous, as the Bedelia is a belt-driven car, and, if you look at that belt in that picture above, flopping lazily on the ground like a comatose ouroboros, you’d think it was broken. But it’s not. That’s how it’s supposed to look.

The way the shifting worked is incredible: The little air-cooled V-twin engine itself slid back-and-forth on rails, and that adjusted the tension of the belt to act as a sort of clutch and to change the driving ratio of the engine to the wheels.

On early versions, the passenger had to manually reach out and move the belt to different pulleys, but later ones employed a flanged pulley system that let the driver do it all from the rear.

Here, you can see one in action:

That dragging belt looks just so very, very wrong. And relying on belt-slip to drive the car must have caused those belts to wear out quicker, too, right?

The August 9, 1912 edition of Scientific American has a racing Bedelia on the cover, and describes its operation in a good bit of detail: 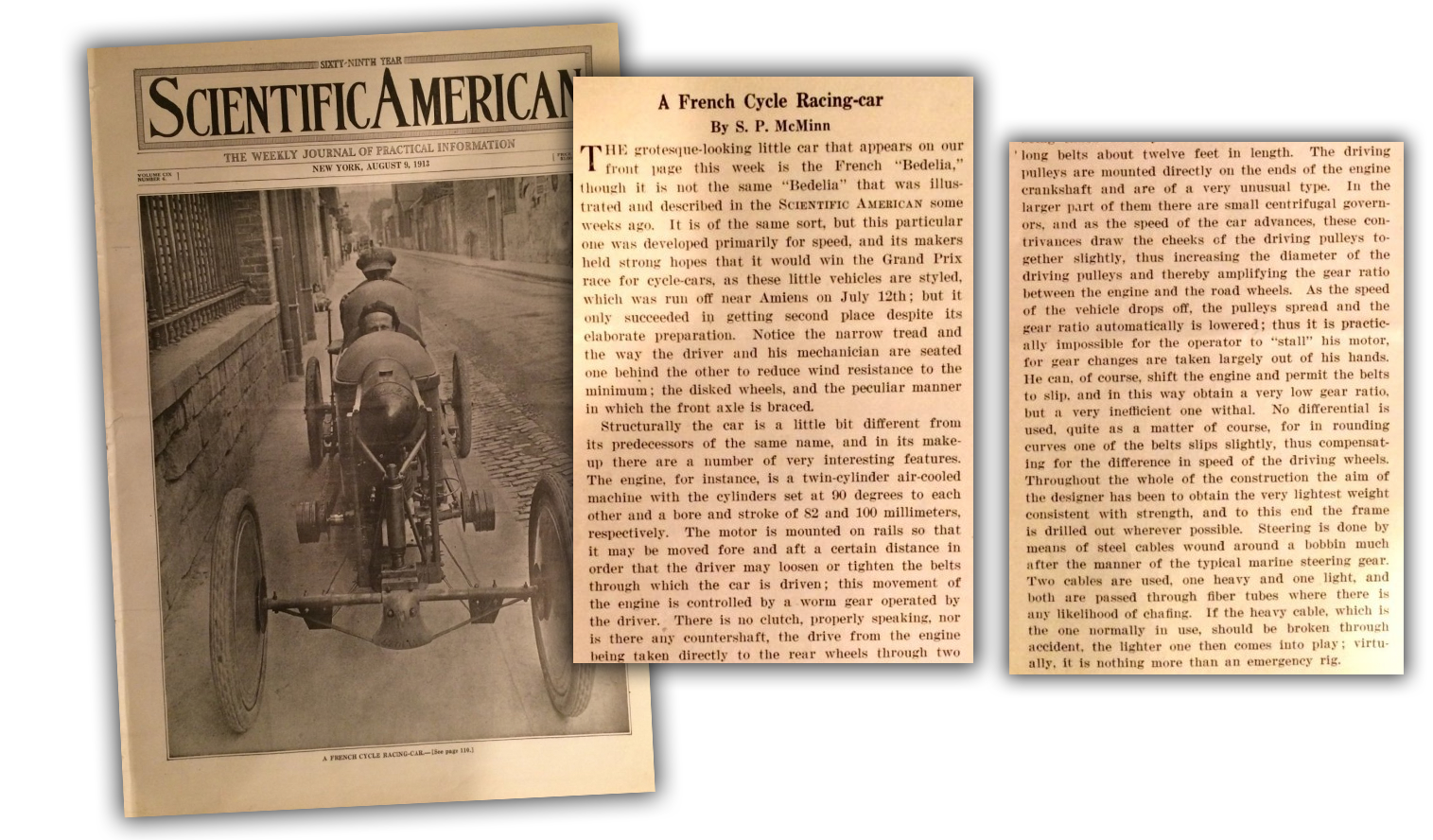 “The motor is mounted on rails so that it may be moved fore and aft a certain distance in order that the driver may loosen or tighten the belts through which the car is driven; this movement of the engine controlled by a worm gear operated by the driver. There is no clutch, properly speaking, nor there is there any countershaft the drive from the engine being taken directly to the rear wheels through two long belts about twelve feet in length…