Knock knock. It’s the Subaru Ascent gently reminding everyone that it still exists. More importantly, it’s been working on itself to try to feel a bit less forgettable. It’s getting some styling updates and tech revisions for 2023 in an attempt to prove that Subaru even gives half of a shit, and said updates honestly seem like they could do… something. Will they help Subaru pull out of its apathetic product slump? Absolutely not, but the Ascent at least seems to be working towards a reasonably agreeable position in the marketplace. 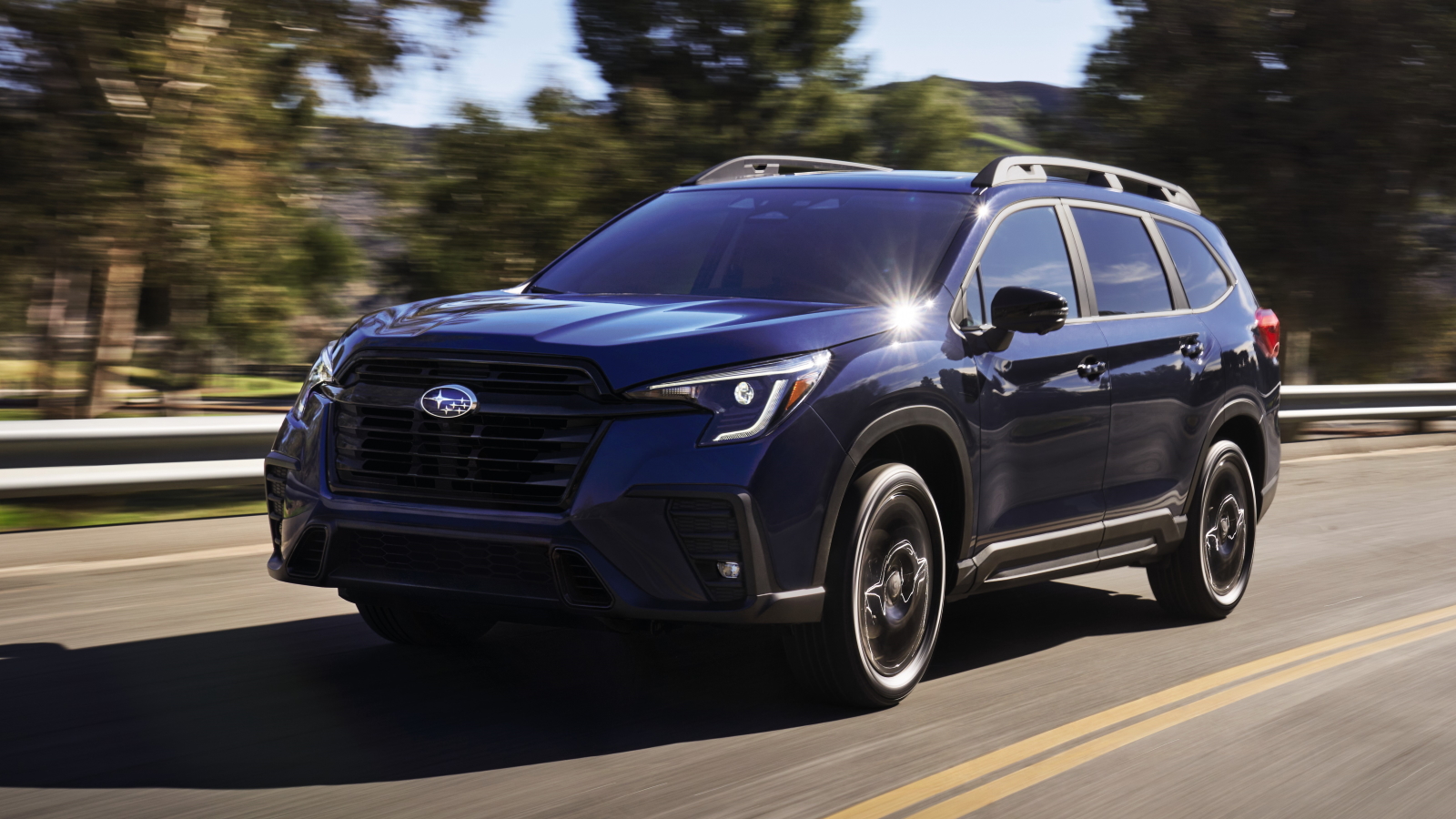 As the concept for the Ascent is essentially a seven-fifths-scale Forester with three rows of seats, it makes sense that Subaru would facelift the Ascent to more closely match the updated Forester’s styling. Now, the current Forester’s styling ranges from frumpy in standard trim to about as ugly as an open wound in Wilderness trim, [Editor’s note: It ain’t that bad. -DT] so messing with the Ascent’s design in such a manner seems almost like walking a tightrope in a white jumpsuit while holding two bowls of tomato soup.

Honestly, I have to hand it to Subaru; this is one of the best applications of the brand’s new styling language yet. The blocky headlights and massive grille really fit the Ascent’s size and stature, although the detailing on the front end can be a bit fussy. 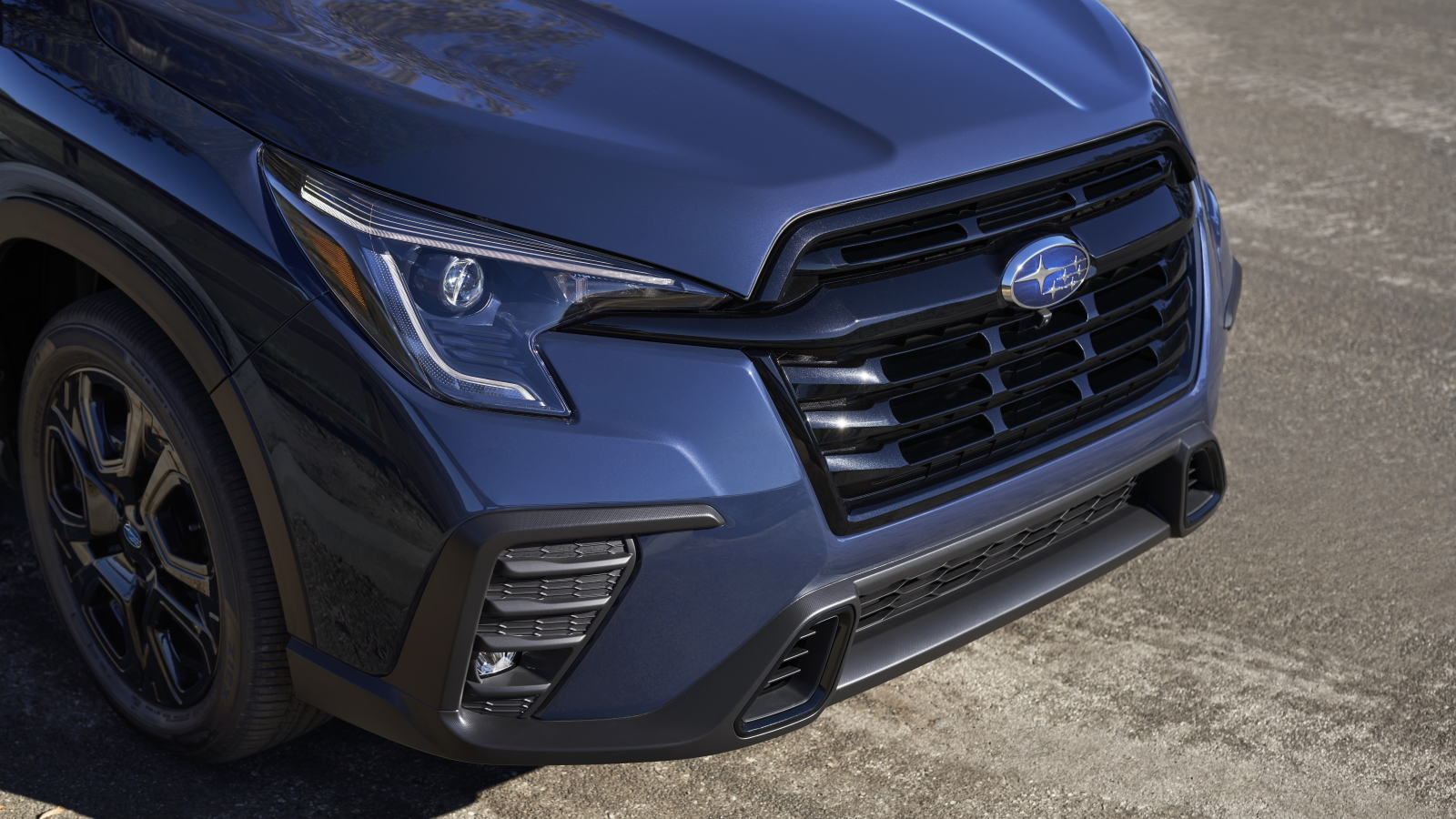 The massive grille spar looks alright on darker colors or when finished in black, but I’m unsure how it’ll look on a white vehicle — likely better than the available chrome bezels on the lower fascia that seem just a touch gaudy. Honestly, I wonder if Subaru is actually ashamed of the Ascent’s new front end; most press kit photos are backlit or heavily-cropped, with the only frontlit shot of the whole front end being high and fairly tight. It’s a shame because the updated Ascent looks better than the new WRX, but sometimes that’s just the way things go. 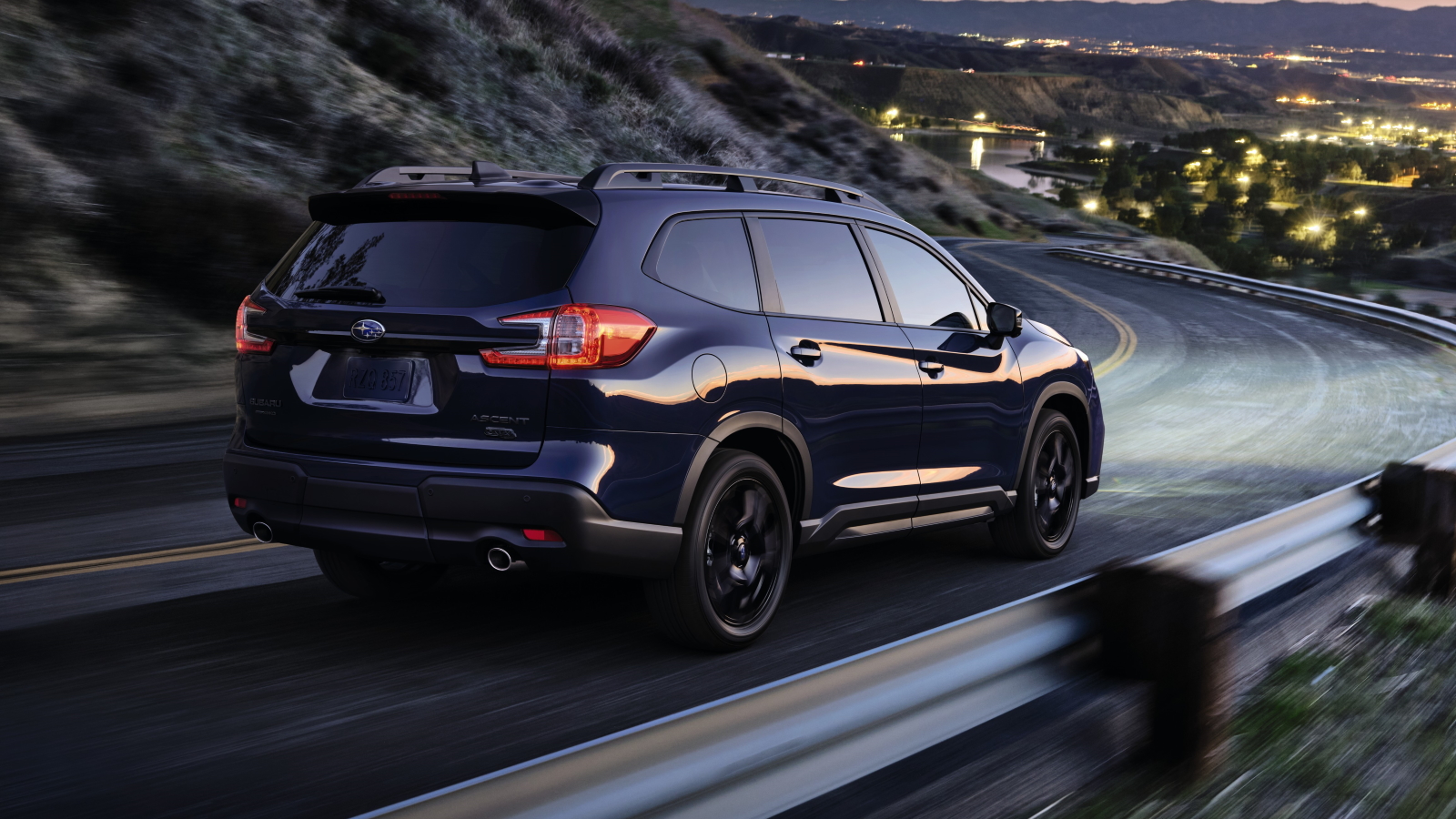 Moving on to the rear end, it seems like a wholehearted improvement over the old Ascent’s rear styling. The new color-keyed bar through the tail lights feels far more cohesive, while the new inner tail lights feature elements that line up better with the outer tail lights. Notice I said better, not perfectly.

See, Subaru hasn’t spent much money out back, only changing the trim panel above the license plate and the inner tail lights. While it can be tricky to create an updated look with so few changes, it actually seems to have worked here and I’m relieved to see such restraint. While Subaru seems to be gunning for a podium finish in the International Plastic Cladding Competition, the Ascent doesn’t appear to grow a cartoonish faux-diffuser or fever dream Gandini-esque wheel arch trims. 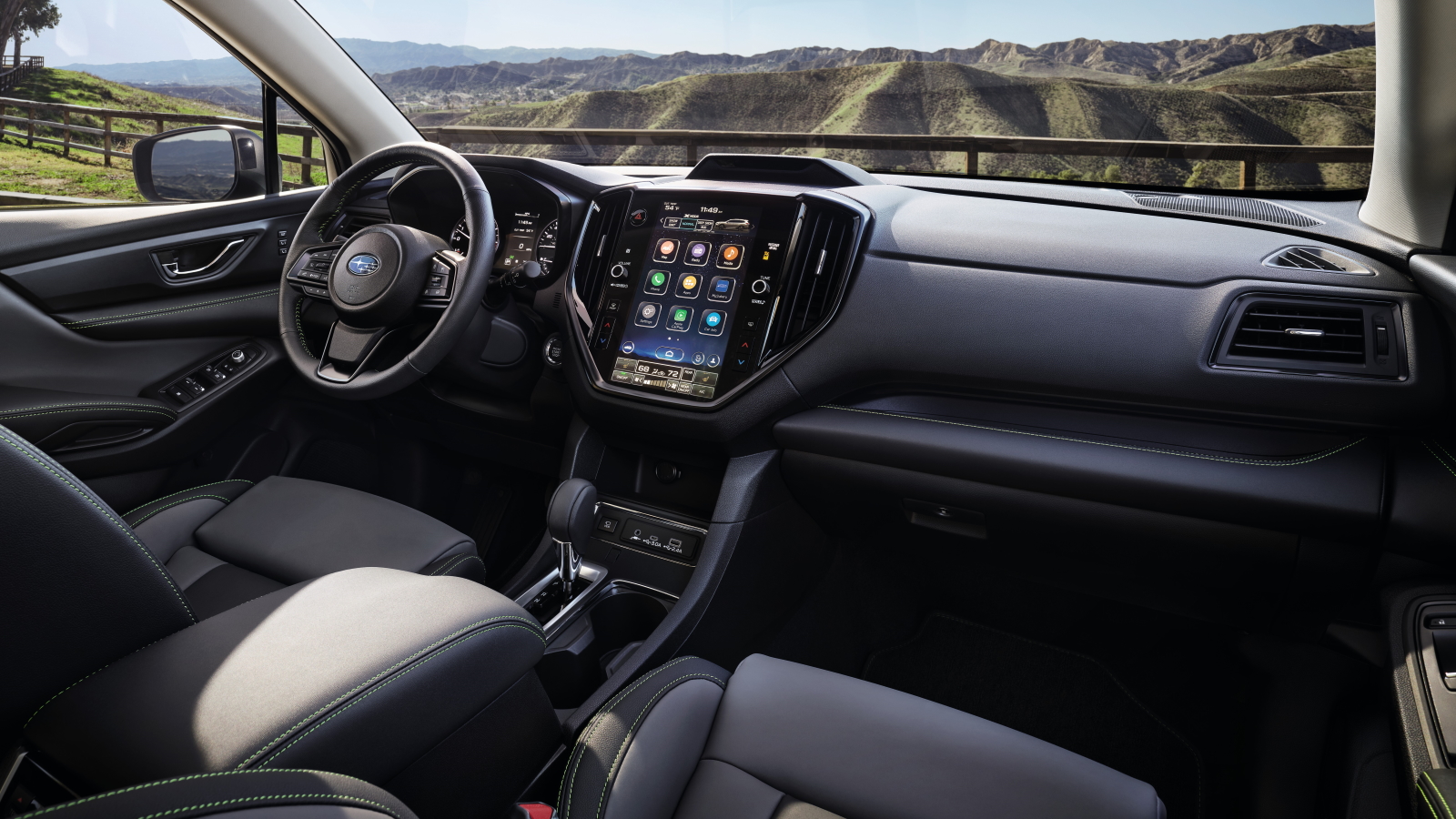 While the new Ascent’s updated styling is best described as fairly mild, changes to the interior are far more substantial. Let’s start with the 11.6-inch elephant in the room, the massive new touchscreen. While touchscreen-integrated heated seat controls can be rather annoying, the old Ascent’s center stack ergonomics are best described as haphazard. Information was split between three different displays, none of which perfectly matched with any other. This new setup integrates information cleanly while still providing physical controls for volume, tuning, HVAC temperature, and a few other necessities. It’s such an improvement over the old center stack that even a physical control fan like me can give a nod of approval. 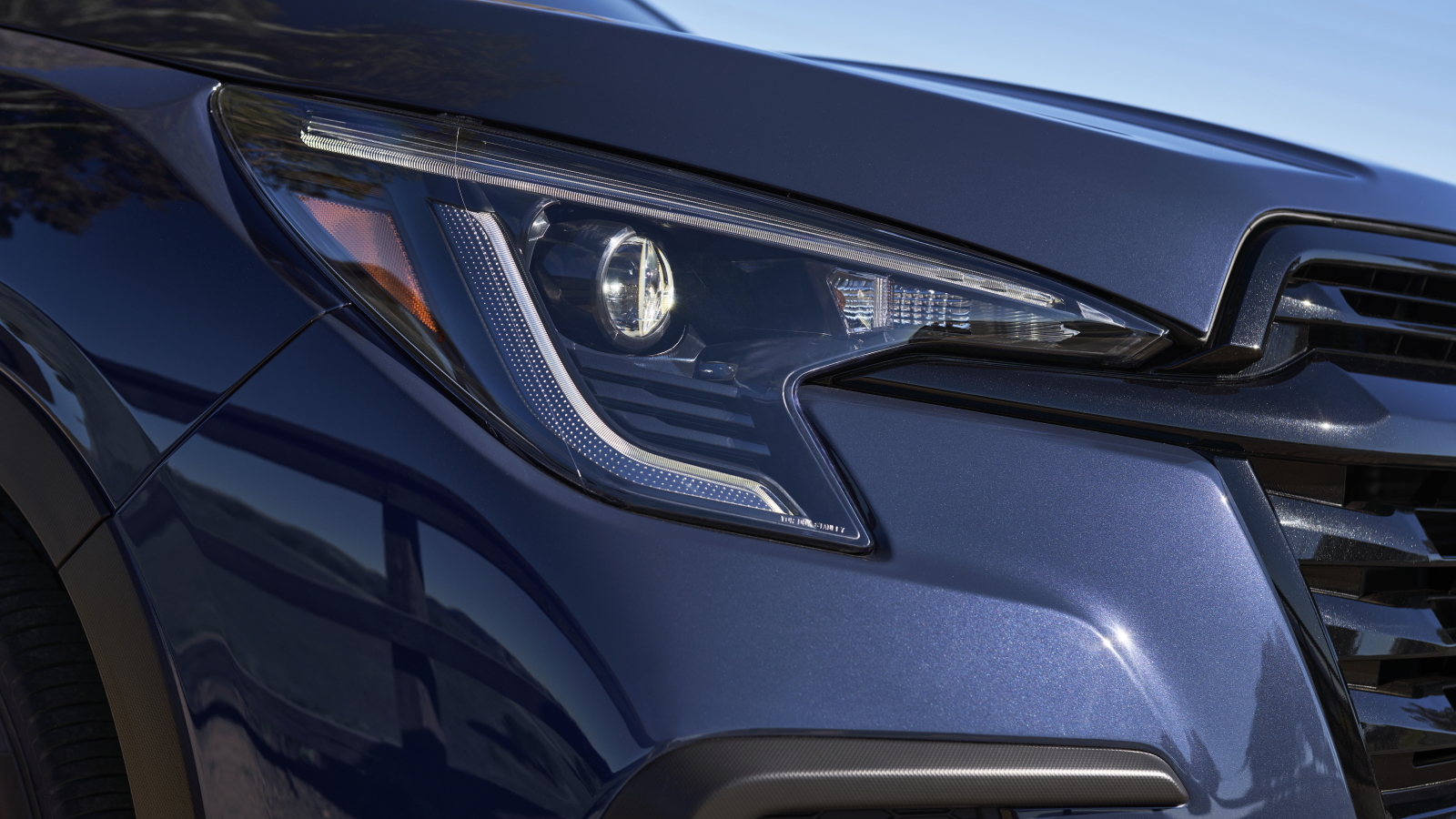 A bigger screen isn’t where the tech upgrades stop on the new Ascent. There’s now an available in-car intercom system so you can yell at third-row passengers for behaving badly, plus an available proper birds-eye 360-degree camera system. That intercom system is only available on models with the Harman/Kardon stereo, an upgrade likely worth spending some money on. On the standard equipment front, all 2023 Ascents now get adaptive LED headlights, automatic high-beams, wireless Apple CarPlay, wireless Android Auto, and a wide-angle camera to enhance the effectiveness of the Eyesight driver assist suite. Nifty. Speaking of nifty, the Ascent now has a washer nozzle for the reversing camera, a pretty lovely little touch. 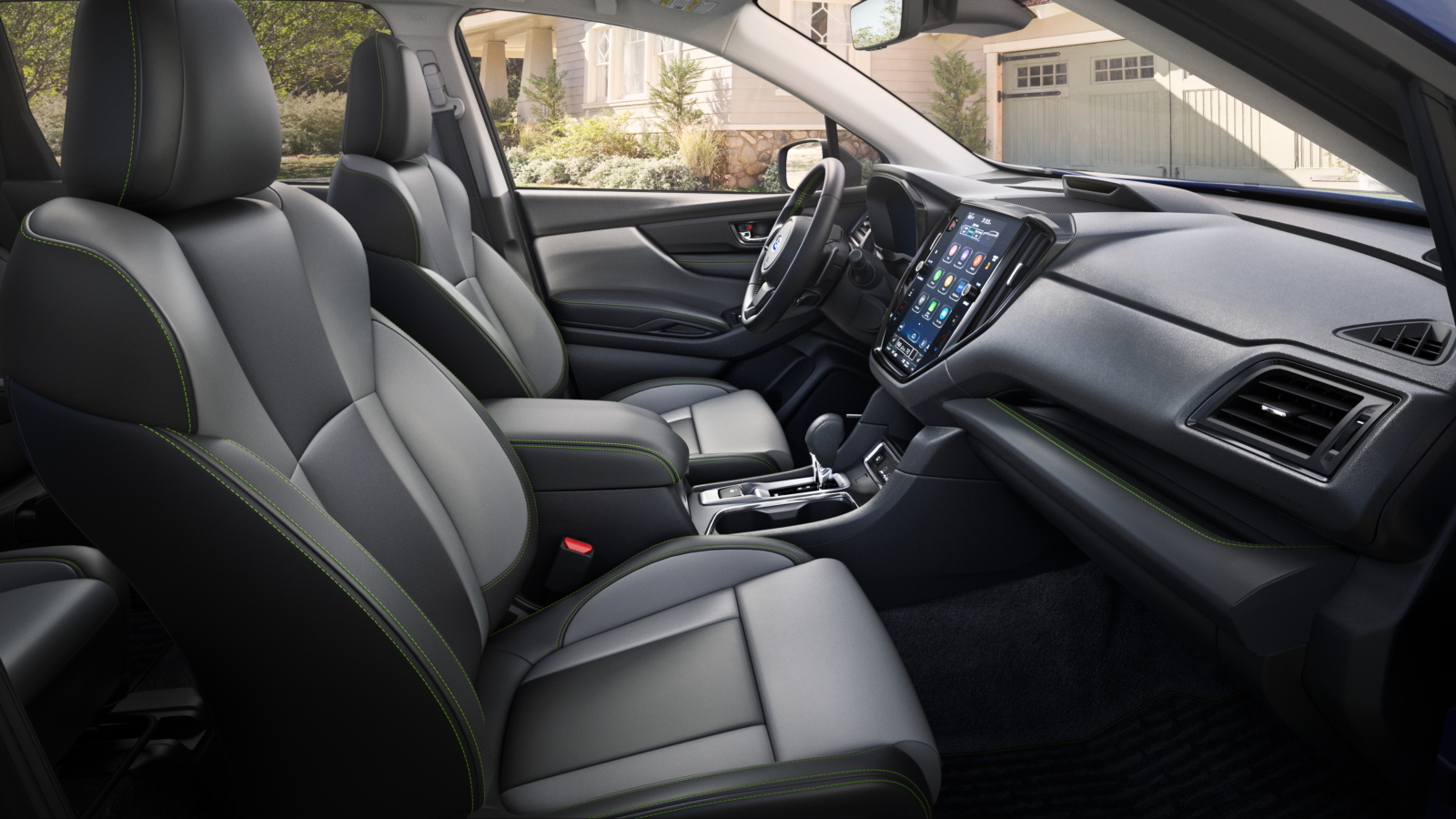 Of course, with improved tech comes and improvement in interior materials, particularly on the Onyx trim level. Look, special blacked-out appearance packages are here to stay for as long as automakers can juice extra money out of them, so at least Subaru is taking steps to make the blacked-out Ascent a bit more tasteful. See, the 2022 model has this vast swath of horrible, nasty faux-carbon fiber plastic across the dashboard and door cards. For 2023, that horrific misstep in materials has been rectified by additional stitched materials, an unequivocal improvement. Moreover, Subaru’s made the interesting decision to go with green contrast stitching on Ascent Onyx models. It sounds a bit weird, but I actually like how it perks the interior up a touch. More fun stitching, please. 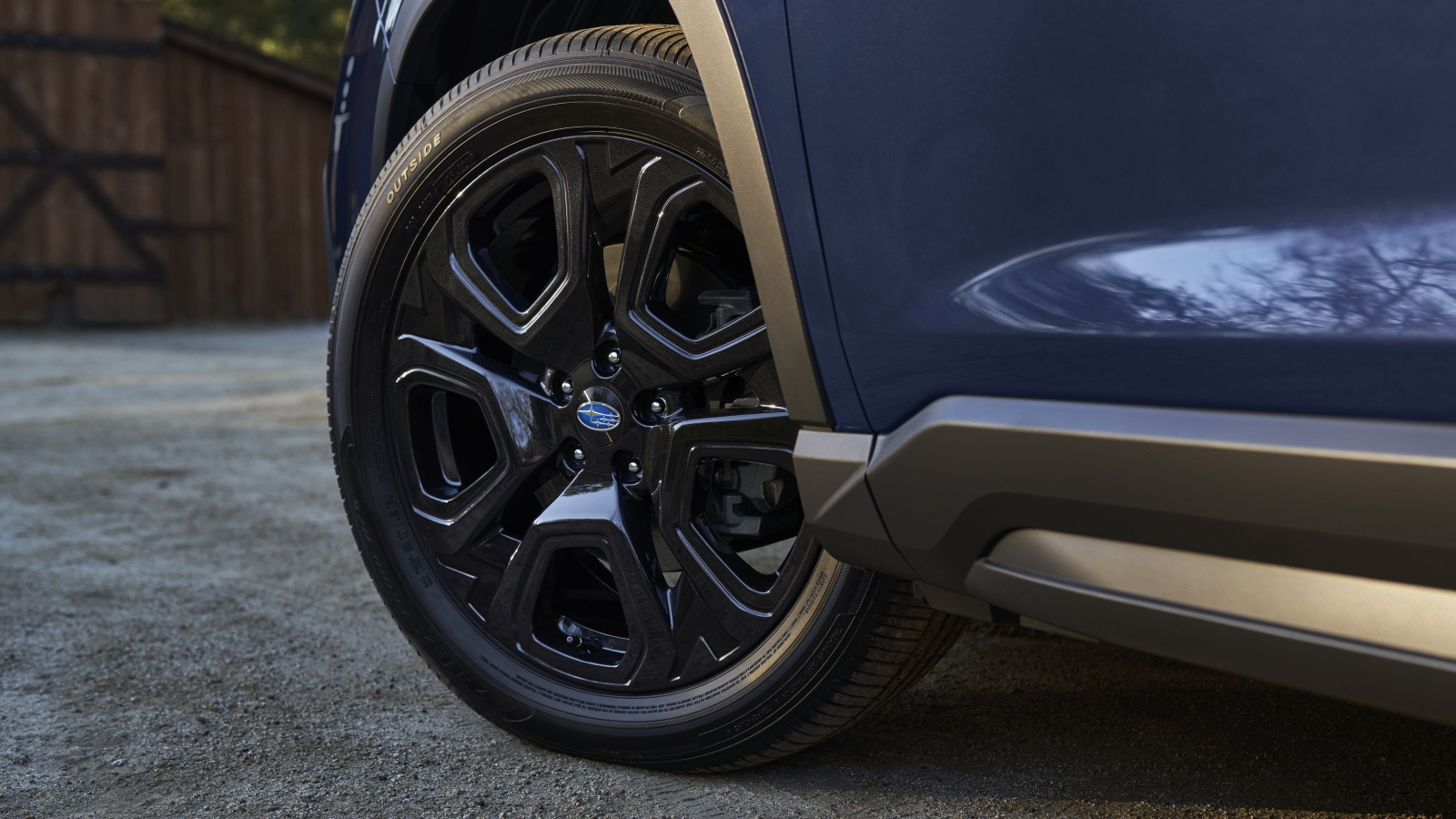 As for the Ascent’s powertrain, it remains unchanged. You get a 260-horsepower 2.4-liter turbocharged flat four-cylinder engine hitched to a continuously variable transmission and an all-wheel-drive system with a default 60:40 front-to-rear torque split. Hey, it won’t stir the soul, but it’ll tow 5,000 pounds and make the most of the Ascent’s 8.7 inches of ground clearance in snowy conditions. Sure, Honda’s 3.5-liter V6 in the Pilot makes raucous VTEC noises at high RPMs and the VR6 engine in the Volkswagen Atlas is particularly smooth, but three-row family haulers aren’t exactly designed to be bastions of performance; they’re designed to have as many cupholders and seats as possible, 19 and eight respectively in the case of the Ascent. 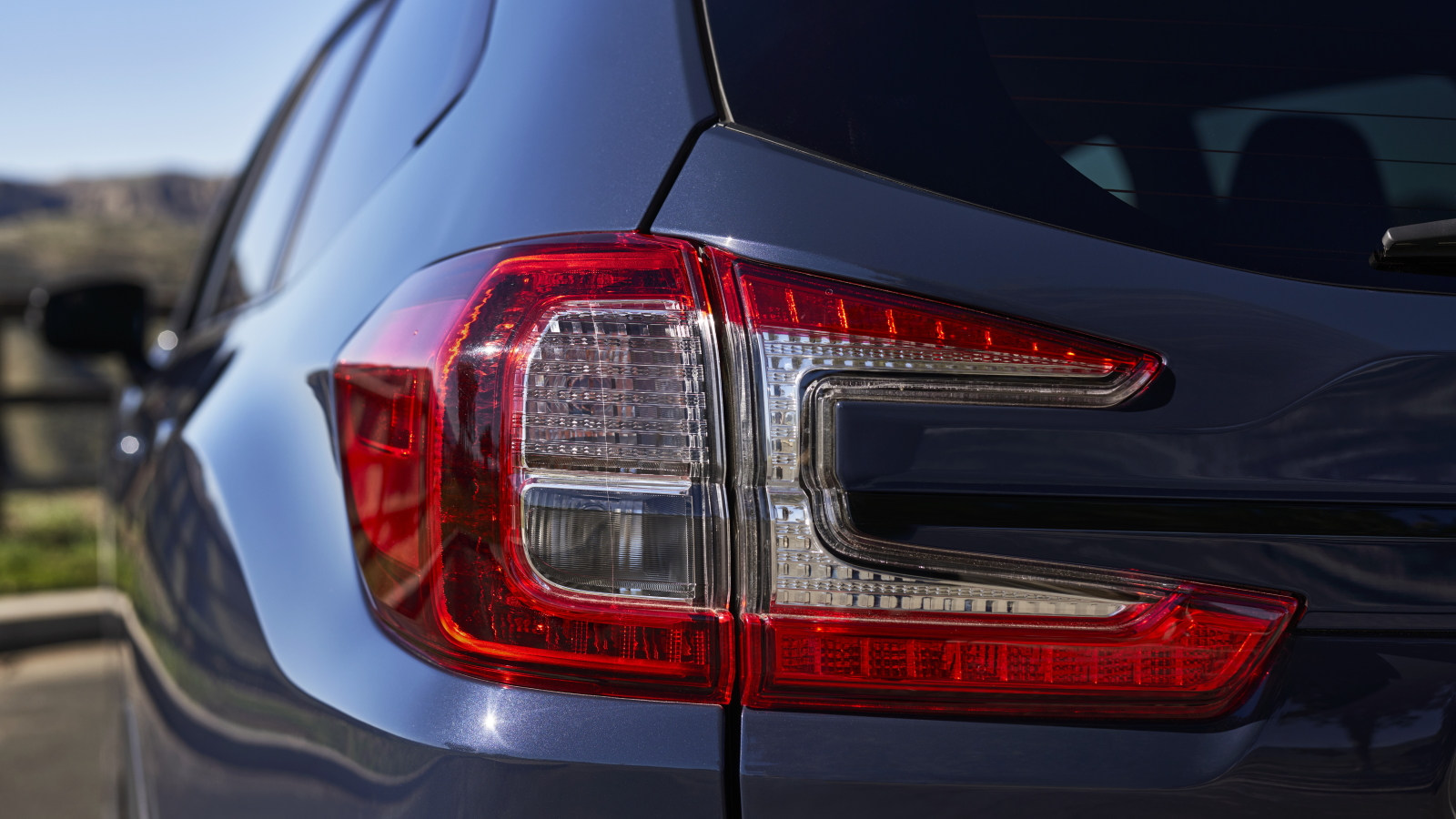 Let’s be honest, the Subaru Ascent is a vehicle that had to evolve. The new Nissan Pathfinder, Kia Sorento, and Mitsubishi Outlander have really helped raise the bar in the three-row crossover arena, so Subaru really needed to muster up a facelift to simply try and keep up. While the 2023 Subaru Ascent definitely doesn’t appear to succeed at that goal, at least it looks like reasonably acceptable three-row family transportation. While it would’ve been nice to see Subaru spend some actual money on making a cabin that feels right up to date, nobody can exactly say they’re disappointed here when expectations were so low to begin with. Expect detailed information on pricing and fuel economy closer to this fall, when the 2023 Ascent is expected to hit dealer showrooms.

[Editor’s Note: To address a few comments from Subi fans: We at The Autopian are all about giving writers freedom to say what they believe, and while Thomas obviously doesn’t have any posters of many modern Subarus on his walls, I’m actually a fan of the brand. The Autopian isn’t a monolith; it’s a collection of writers with differing opinions, and I’m always going to let writers share those opinions freely, especially if those opinions can be justified (and trust me, Thomas knows his stuff). -DT]

All photos courtesy of Subaru

Thomas is a Nu Rave-blaring, heel-toe downshifting, maple syrup-swilling, chassis-geeking, junkyard parts-hauling, floppy-haired scenester who's been writing about cars since college. His current ride is a 2006 BMW 325i with the six-speed manual gearbox. Instagram: @thomas.hundal Twitter: @thomashundal
Read All My Posts »
PrevPreviousOur Daydreaming Auto Designer Reimagines A More Modern Version Of The Legendary GMC Motorhome That Died In 1978
NextCold Start: The Hell Happened To All My Stuff?Next