There’s A Surprising Number Of Ways To Mark A Fuel Gauge, So Let’s Pick What We Like Best 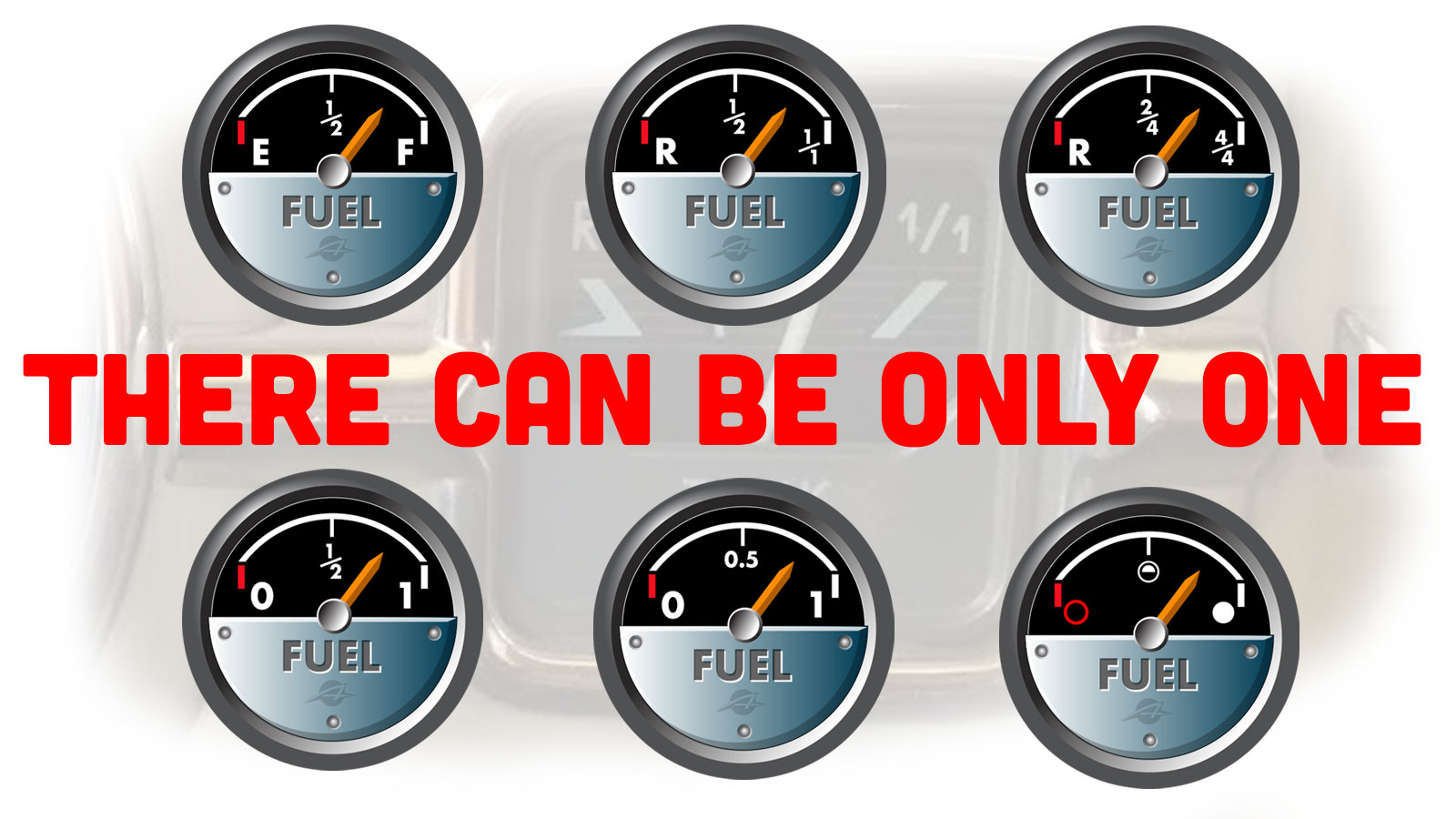 With gas as expensive as the hand-crafted saffron water and human growth hormone lotion I order from the Dark Web to keep me looking young and glistening, making my skin look like a nectarine slathered in Astroglide, we’ve all likely been looking at our fuel gauges a lot more than normal. And this has got many of us thinking about the fuel gauges themselves, specifically, what’s the best way to mark a fuel gauge? This is one of those things you’d think the auto industry would have standardized upon after well over a century of mass automobile production, but that’s not the case. At all. So, let’s distill the main kinds down into categories, and try to figure out which we like best. This is important.

I know people have been thinking about this, because we at The Autopian were awoken by the incredibly loud klaxon and flashing, caged red light that goes off whenever we’re tagged on Twitter. People are discussing fuel gauge notation, and they want us involved, and this is not something I can say no to.

I’ve tried to distill down the variety of fuel gauges into six main categories; I know there will be some outliers, which I’ve covered here before, or on the Old Site, so if there’s a hyper-specific variant I’ve missed, please know this was not a personal slight, at least not one I’m admitting publicly, but I’m pretty certain You Know What You Did.

Okay, so, let’s see what these common categories are:

The first is extremely common, especially on American cars, which is why I’ve named it American Iron. I also called it American Iron because the chemical symbol for iron is Fe, and “F” and “E” are the letters here, so I’m feeling pretty flapjacking smug about myself right now, with that little hidden periodic table easter egg. You’re welcome.

So, in this version, F means Full, E means Empty, and a conventional 1/2 fraction is used to indicate the middle state. This is generally pretty quickly understandable, but it does require a knowledge of English, which may not be spoken or read by the driver, possibly requiring localized versions, which costs money.

Still, this one is kind of the iconic example of a fuel gauge.

The Teutonic Basic is named so because it seems to show up mostly on German cars. My old VW Beetle uses one like this, for example, but there’s plenty others. The notable traits about this type is the use of the 1/1 notation for full, or, maybe more accurately here, “whole,” and then 1/2 for half, and, most confusingly to the uninitiated, R for empty.

The reason for R that I had always heard was that it means “reserve,” suggesting you’re in an emergency reserve fuel supply, something that was literally the case with pre-1962 VW Beetles, which had a reserve fuel tank, with one gallon capacity, instead of a fuel gauge: 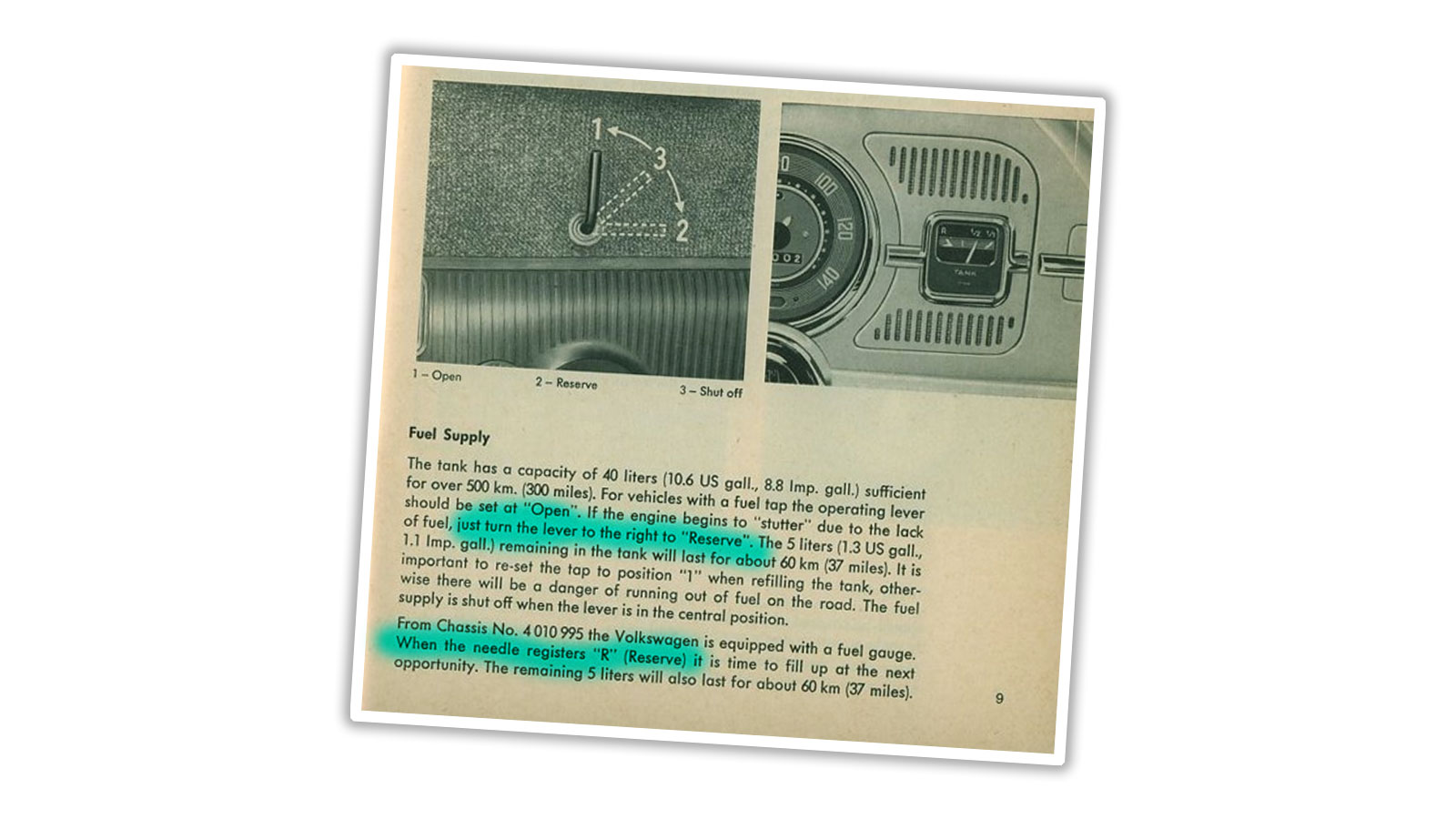 These have a certain sense of precision to them because of the very math-rational-like 1/1 full notation, but that R is pretty confusing to a lot of people who have never dealt with the concept of a reserve fuel tank. Still, some people may prefer the idea of being in “reserve” as opposed to “empty,” as one is a warning and one is a state where you’re already boned. Sort of.

Teutonic Unreduced is basically like Teutonic, but for reasons I’m can only guess at, the fractions have not been reduced, and usually have a denominator of 4. So, we have 4/4 for full, 2/4 for half, then our friend R again for empty. Perhaps some use 0/4? It seems R is more common, though.

The Binary category shuns vague and language-localized letters in favor of the international language of math. Here 1 is full – though 1 may be expressed as a fraction, like 1/1 or 4/4 – and empty is just 0. The halfway point is either 1/2 or sometimes 2/4, and how this is used seems pretty random. For example, you’d think if you started with 4/4 for your whole, you’d keep the 4 denominator for half but look:

4/4 ?!
Anybody else’s gas gauge have this craziness to indicate a full tank?
It’s my Triumph Spitfire. Btw.@JasonTorchinsky ?@the_autopian pic.twitter.com/J5jhpCUyuQ

I’ll be honest, I don’t think I’ve ever seen a fuel gauge that uses decimals instead of fractions, but I just felt like that should be an option here. It somehow seems to fit if you really want to commit to the 1 to 0 scale, right?

I like this kind, because it neatly circumvents any issues with language or math or literacy at all, relying on simple, easily understandable pictograms. Now, really, any shape could be used here, little squares or rectangles or stars or whatever, as long as one is filled, one half-filled, and one empty. But it’s almost always little balls.

The balls tend to resemble those Harvey Balls, the hilariously-named symbols used by Consumer Reports magazine for their ratings: 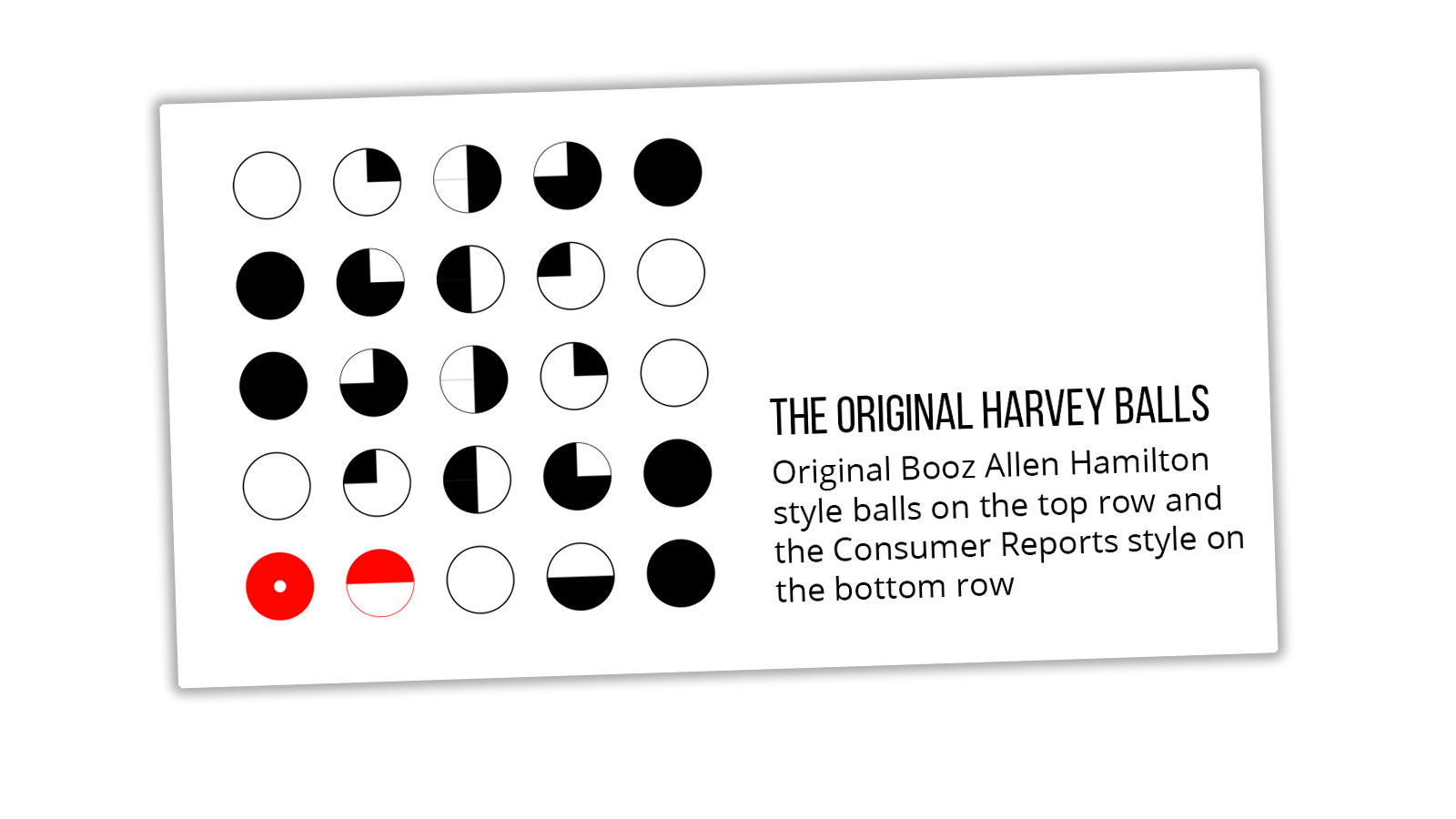 Hey, here’s a weird coincidence: another famous simple round symbol, the smiley face, was invented by a designer named Harvey Ball. What the hell, reality? You couldn’t have picked another name? This is almost as bad as the fact that there’s the Levi-Strauss anthropologist and the Levi Strauss blue jeans guy, or Armand Hammer and Arm and Hammer baking soda. It’s just weird.

Okay, so I think these are the most common categories out there, and I bet you have preferences, so let’s see what they are, with the magic of a poll!

Quiz Maker
Finally, we’ll know! Once we have the results, I’ll hand-deliver them to the King President of Automobiles and they’ll make sure that all carmakers use the winner going forward, as well as retrofitting every single car on the road, at the cost of, likely, billions.

I'm a co-founder of the Autopian, the site you're on RIGHT NOW! I'm here to talk to you about taillights until you cry and beg me to stop, which I absolutely will not. Sorry. Hug? Also, David's friend.
Read All My Posts »
PrevPreviousA Deep Dive Into Why China Still Believes In Hydrogen-Powered Vehicles
NextCold Start: What’s The Matter, Buddy?Next