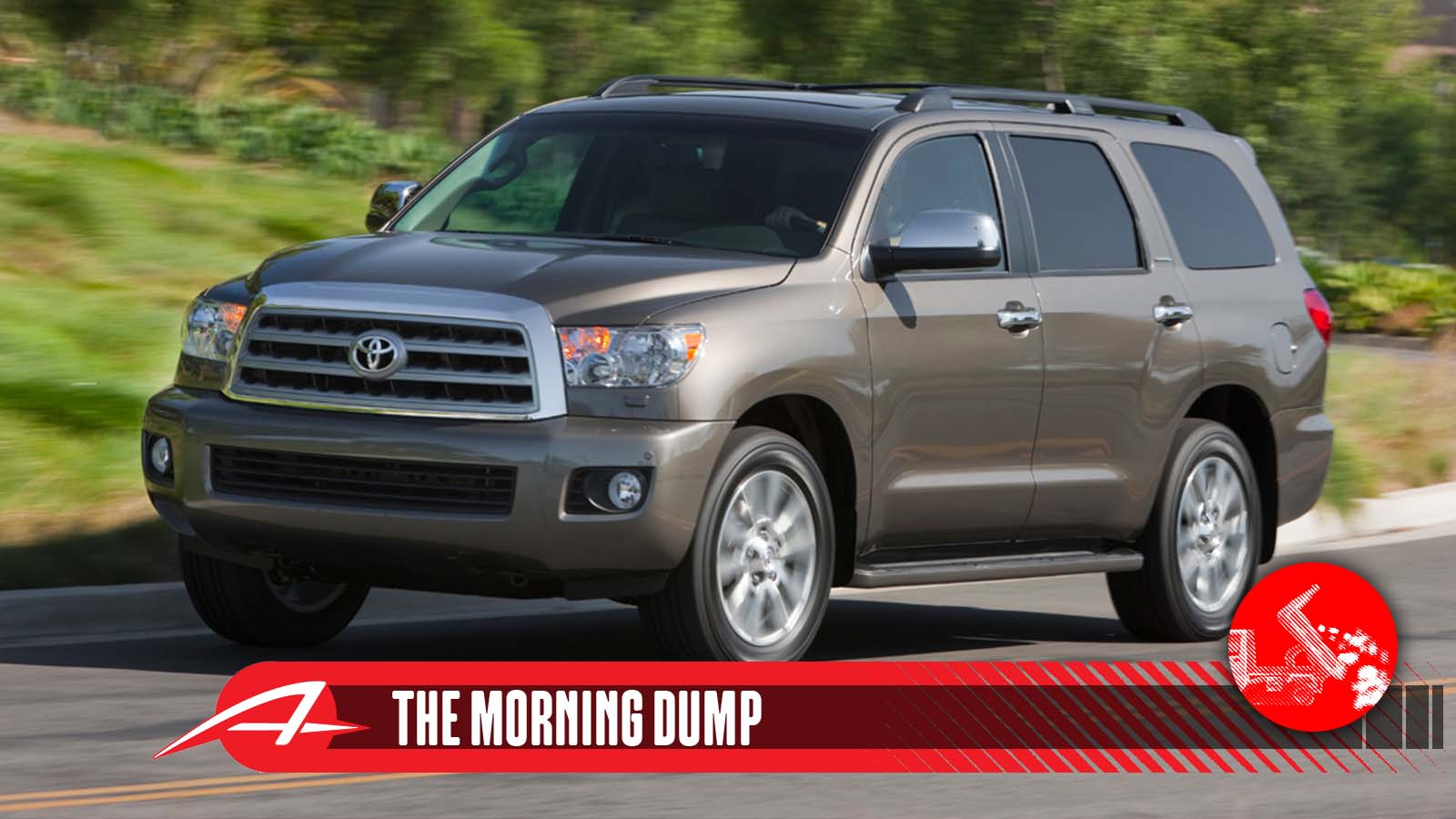 Today we’ve got a list of the 20 most enduring vehicles on the road, a big move from BYD, a bad update from Renault-Nissan, and reasonable news about the chip shortage.

The Toyota Sequoia Is Reportedly The King of Lifespan

The prevailing wisdom around The Autopian is that the most reliable car is the one built with cheap, easy-to-source parts that you can work on yourself. Still, not everyone wants to spend every waking minute wrestling bolts under a Chevy Tracker. A new study from iSeeCars, the used car/VIN check site, shows what analysts at the site think are the most durable cars sold within the last 20 years.

Up top is the Toyota Sequoia at 296,509 miles of “potential lifespan,” followed closely behind by the Toyota Land Cruiser and Chevy Suburban. What’s conspicuous on this list are the numerous Toyotas, though there are a decent number of GM and Honda products on here. There are two Fords (Expedition and F-150) and one Nissan (Titan).

A lot of these “studies” from car websites are questionable, but well-known analyst Karl Brauer put this one together and the methodology seems sound. Here’s how iSeeCars made the determination:

iSeeCars analyzed over two million cars produced and sold for at least 10 of the past 20 model years, ranking each model by its highest mileage-achieving cars. All 20 models had at least 2.5 percent of the top-ranking 20 models clear 200,000 miles, and the top 1 percent of these vehicles delivered between 230,000 and 297,000 miles over the last two decades. For example, 1% of Toyota Sequoias on the road have at least 296,509 miles on the odometer.

I’m curious what the corpus is, but with all the data that iSeeCars has at its fingertips this isn’t a difficult study for them to produce, and the concept of “lifespan” being determined by having at least 1% of these higher mileage cars on the road is interesting.

“What we see is a list of highly-durable vehicles, capable of more than a quarter-million miles of use if properly maintained,” said Brauer. “And to be clear, this study isn’t reporting the maximum lifespan of these vehicles. This is simply a measure of current odometer readings. Most of these cars are still in use and going strong.”

Big trucks and SUVs make sense, both because they’re engineered to be durable and because their value as second- and third-hand work or adventure vehicles (hello Landcruiser) makes it profitable keep these on the road. It’s possible that you can keep a Honda Fit on the road for this long, but the residual value likely drops to the point where there’s less economic incentive to keep those on the road.

The Sequoia is mostly a Tundra underneath, so the durability makes sense, but they don’t seem to be as popular as the LC as an off-road rig. It’s worth noting that the analysis excluded heavy duty vehicles, which are designed for higher mileage.

[Editor’s Note: It seems that, based on how this data set was produced (basically, iSeeCars figured out which cars had the highest percentage of registered vehicles above a certain odometer reading), we can’t really conclude that these cars are the best built (though there’s likely some truth to it), since there are many factors that might lead a vehicle to keep going longer than other vehicles. The way a vehicle is driven and the way it’s maintained play big roles; an expensive car may get better treatment than a cheap one. A work-vehicle (like Matt mentioned) may stay on the road longer since its ability to perform its intended function doesn’t diminish as much as, say, a minivan (which after 10 years isn’t as safe or efficient as its competitors — and these are super important traits to shoppers in this segment).

I myself have owned a 265,000 mile Toyota Land Cruiser and a 265,000 Jeep Grand Cherokee. The former was still worth a lot, since these vehicles are known to last this long with few issues. A 265,000 mile Jeep, though, is worth very little, as people are suspicious that it won’t last much longer. Is it because the 4.7-liter V8 in the Toyota is better than the Jeep’s 4.0? No. I think serviceability plays a big role (the Toyota is a little easier to fix and maintain, in my experience), and so does initial value. The Land Cruiser is an expensive machine, so it tends to be treated better. Jeeps get beaten on.

Unrelated: I welcome you enginerds discussing the technical definition of “durability” in the comments. -DT]

Renault And Nissan Still Haven’t Figured It Out

Last week I mentioned that those lovable scamps at Nissan and Renault were trying to repair their troubled alliance and even had a planned announcement to explain how they were going to fix it all.

We’ve got an update from Automotive News Europe this morning on how that’s going:

Renault and Nissan are set to delay a Wednesday announcement of a deal to restructure their automotive alliance as they struggle to bridge their differences, three people familiar with the matter said.

Discussions with Nissan started earlier this year as Renault began work to carve out its electric-vehicle business, known as Ampere.

BYD Is Coming To Japan Next Year

If I haven’t already made it abundantly clear: I think BYD is the most interesting carmaker to watch over the next five years. The Shenzen-based carmaker is, first and foremost, a battery maker (the company rose to prominence making the batteries that might have powered one of your cellphones). BYD has managed to keep costs in China lower than the competition while also building cars capable of getting five stars in crash test ratings from EuroNCAP.

The company has been running a pilot sales program in Norway and they’re going to be for sale across the continent over the next few months.

Now we have a new story from Reuters that says BYD is going to enter the Japanese market in early 2023.

The Shenzhen-based auto and battery producer, which includes Warren Buffett’s Berkshire Hathaway as an investor, held a brand conference in Tokyo and announced plans to start selling a small all-electric battery car called the ATTO 3 at the start of next year, followed by two additional EV models later in 2023.

Japan’s market has not, historically, been a great place for foreign automakers to sell cars. It’ll be interesting to see how BYD manages.

No North American Car Plants Are Cutting Production Due To Microchips

Here’s a little bit of sunshine on your Monday morning from Automotive News, which is reporting that automakers are not cutting any vehicle production at North American plants this week because of chip shortages.

That doesn’t mean there are no cuts anywhere, however:

Most of the latest disruption is occurring in Europe and at Asian assembly plants outside China.

While more modest than many other production schedule modifications this year, the latest cuts bring the global industry to a loss of nearly 4.2 million cars and trucks in 2022 to date, according to AutoForecast Solutions.

That’s a lot of cars, but the story goes on to note that the original forecast of vehicles delayed this year dropped by more than 90,000 vehicles. Does this mean we’ve reached the bottom? I’m cautiously optimistic, even with disruptions from COVID and the global economy, as well as war in Europe.

What’s the highest mileage vehicle you’ve ever had? How many miles do you have on your daily?

Howdy! I'm the Publisher of The Autopian which means I'm to blame for at least a small part of this. I used to run another car site and then made movies and TV shows. Now I'm here to convince you to buy a Peugeot.
Read All My Posts »
PrevPreviousFamily Fight Night: 2006 Chrysler Sebring GTC vs 2004 Mercedes-Benz E320
NextThe 2024 Acura Integra Type S Will Be A Second-Hand IconNext