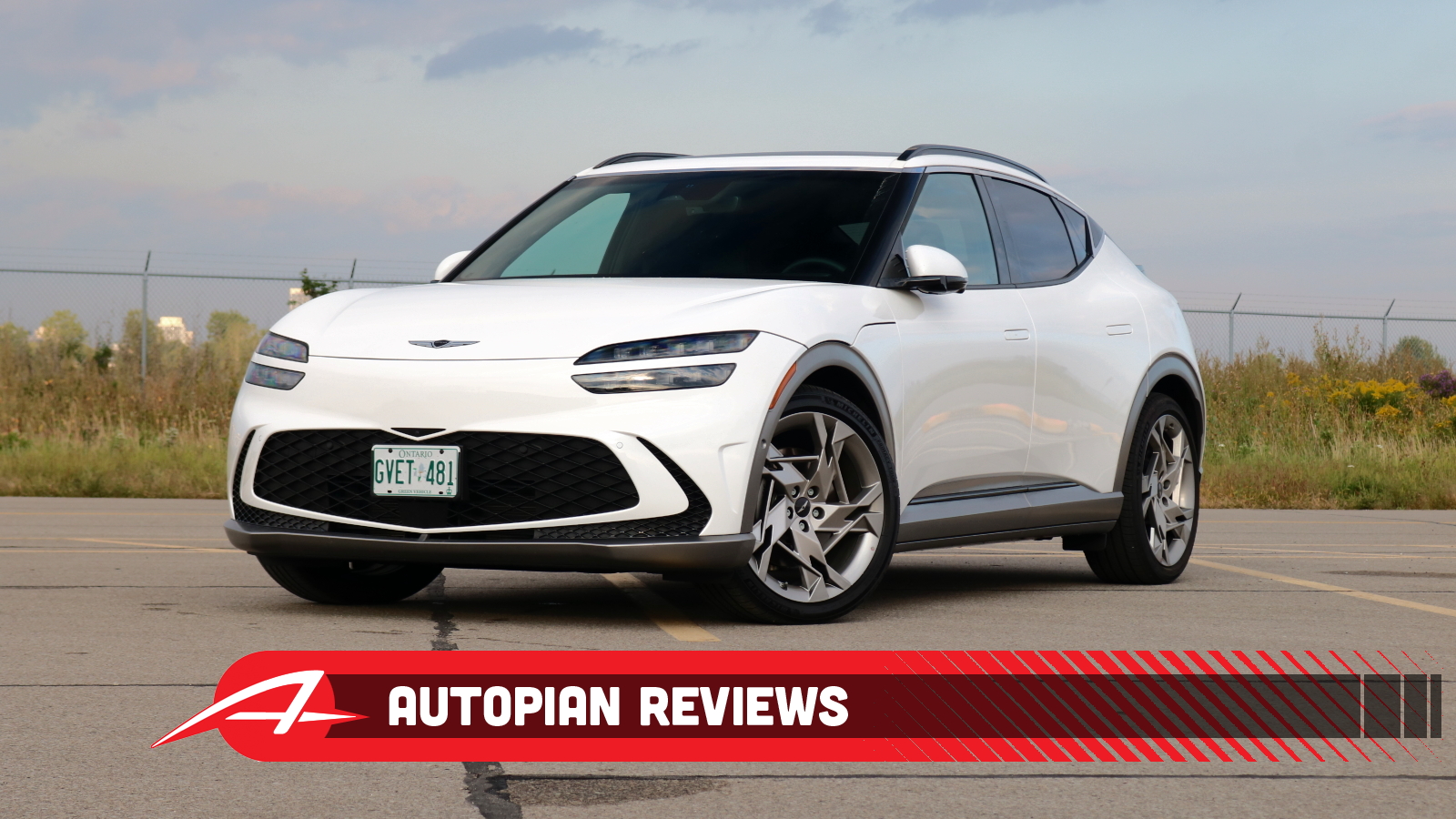 Say hello to the electric performance crossover of the moment, the Genesis GV60 Performance. On paper, the specs are incredibly impressive. We’re talking about a crossover with a zero-to-sixty time of under four seconds, incredibly fast charging speeds, and more gadgets than your local Best Buy. Come to think of it, that sounds a lot like a Tesla Model Y Performance. Hell, the two cars even share a trim level name. So, can Genesis beat Tesla in the small, sporty electric crossover arena? Let’s find out.

[Full disclosure: Genesis Canada let me borrow this GV60 Performance for a whole week so long as I returned it brimming with charge and wrote a review of it.]

What Makes It Tick? 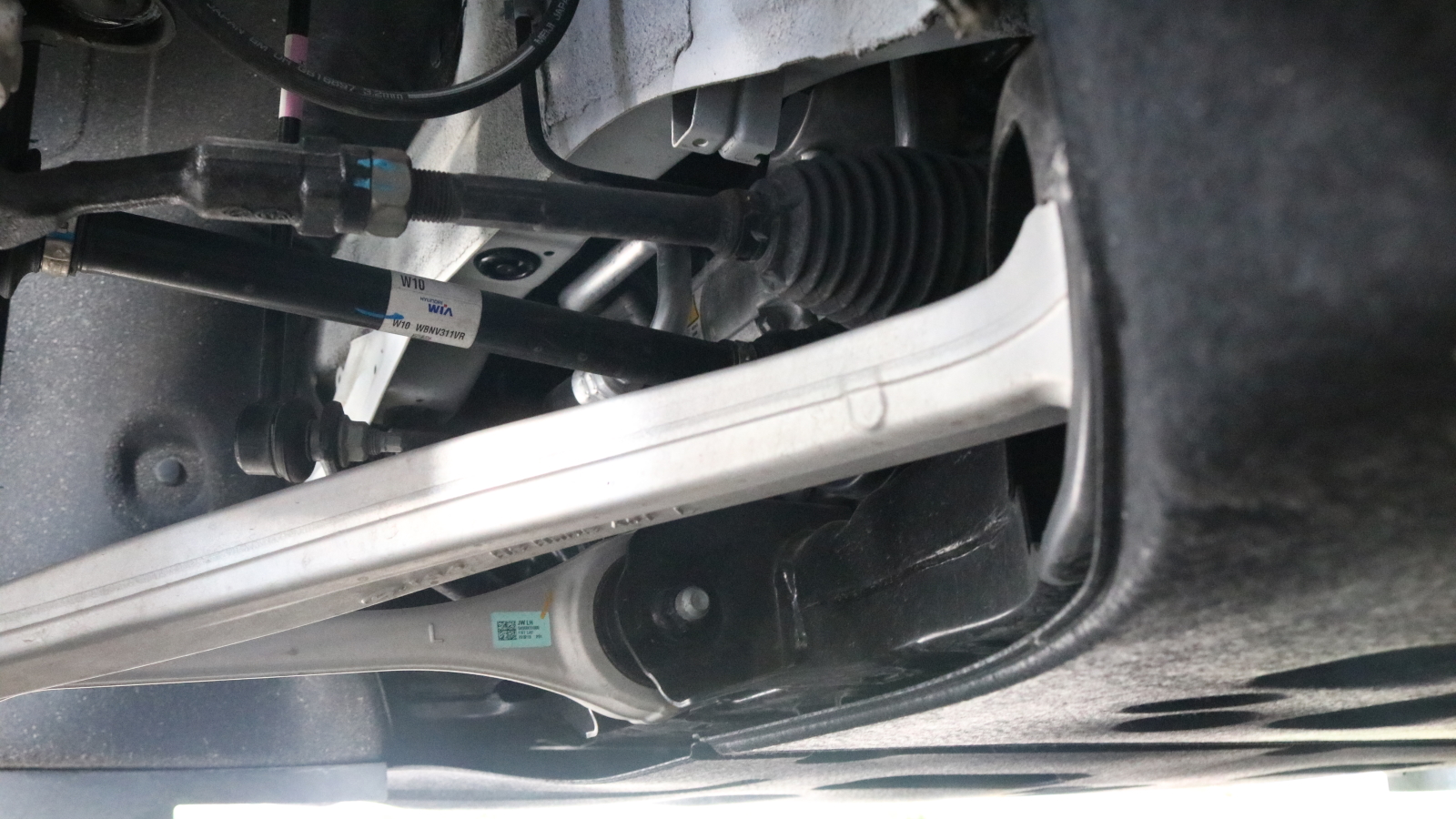 As with the blockbuster Hyundai Ioniq 5, the Genesis GV60 rides on Hyundai’s E-GMP platform, a dedicated architecture for electric vehicles that looks very different underneath than most gasoline-powered cars. Because there’s no need to package a combustion engine between the strut towers, the front frame rails are quite far inboard, maximizing tire clearance to enhance turning radius.

Since there’s a massive battery pack under the floor, the sills on the GV60 are quite thick, which results in several benefits. Not only are large sills typically good at providing strong structure, the sills cover the sides of the pack completely, aiding underbody aerodynamics. Speaking of battery pack-related things, the GV60 features an 800-volt architecture that permits peak charging speeds of 235 kW — properly fast stuff. 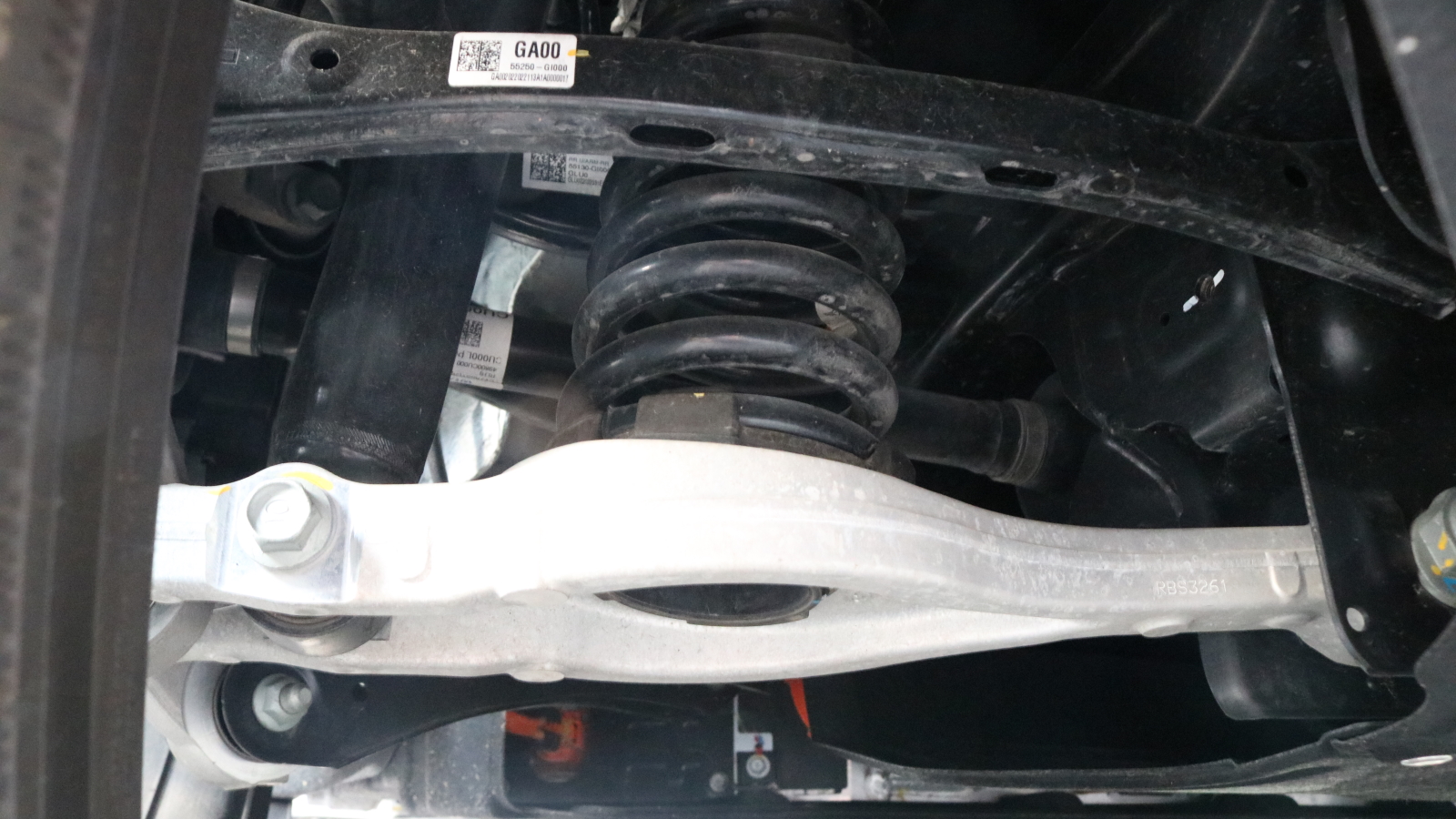 Regarding suspension, the GV60 uses a strut-type front suspension with aluminum lower arms, while rear suspension is a multi-link design using a mixture of aluminum and steel components. Springs are coils at each corner, as the GV60 Performance relies on adaptive dampers rather than air suspension to smooth out rough tarmac. This could prove cheaper for owners in the long-run, as air struts are still properly expensive things to replace. 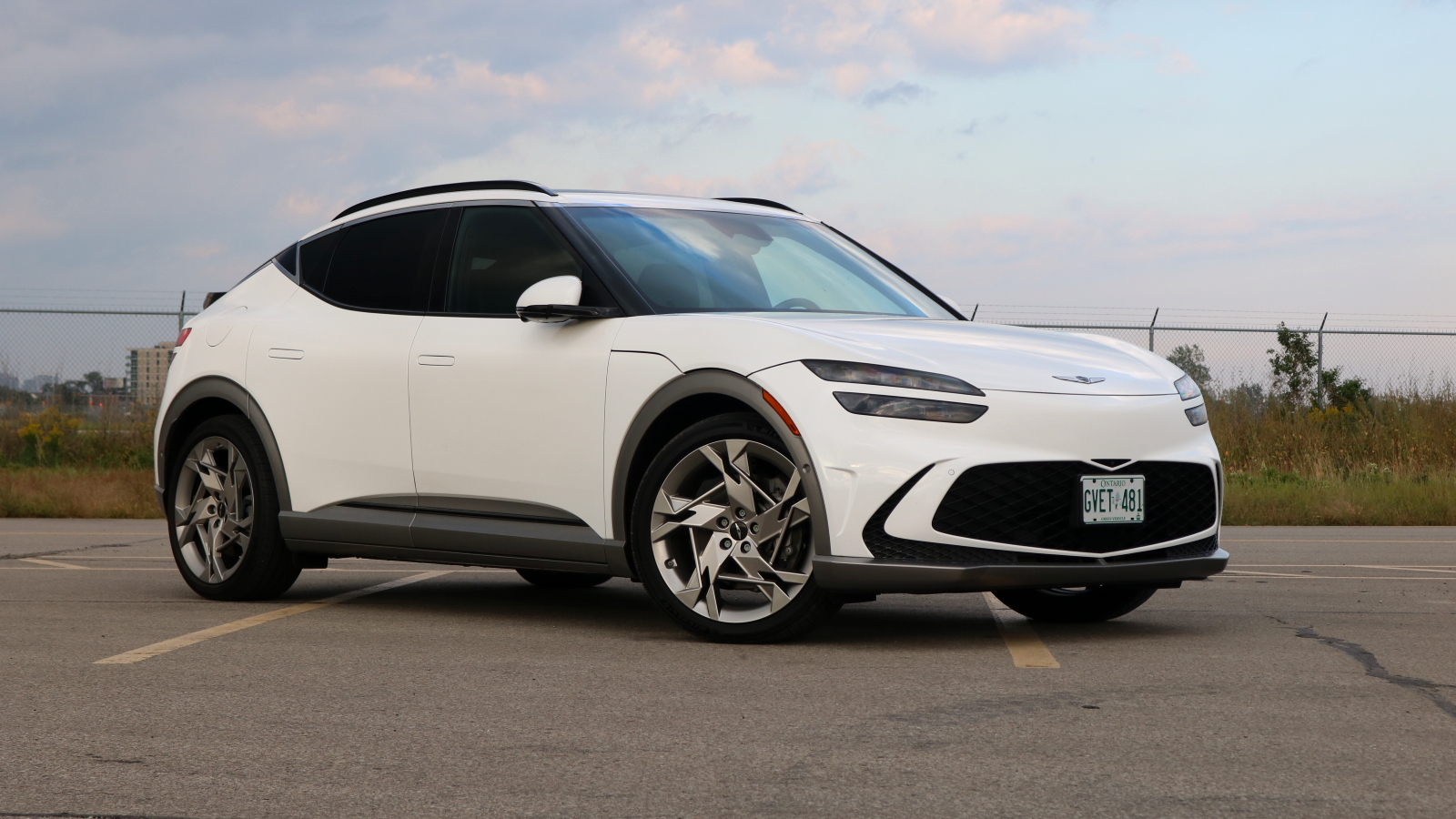 The Genesis GV60 looks different, but that’s by no means a bad thing. Many compact electric crossovers are amorphous blobs designed more for the wind than for viewing pleasure. The GV60 flaunts that common approach with a dose of amphibian appeal. With sheetmetal clinging low to the platform, and plenty of curves, the car has the stance and silhouette of a frog on a lily pad. There’s further oddity in the details, like the zig-zagging chrome trim on the rear pillars that presents as an inside joke on floating roof fads, or the cross-hatched pattern on each wheel spoke. Oh, and there’s no rear wiper to speak of, so expect the tailgate glass to stay coated in dust. Still, it makes for a clean look — an amusing oxymoron from the design department. 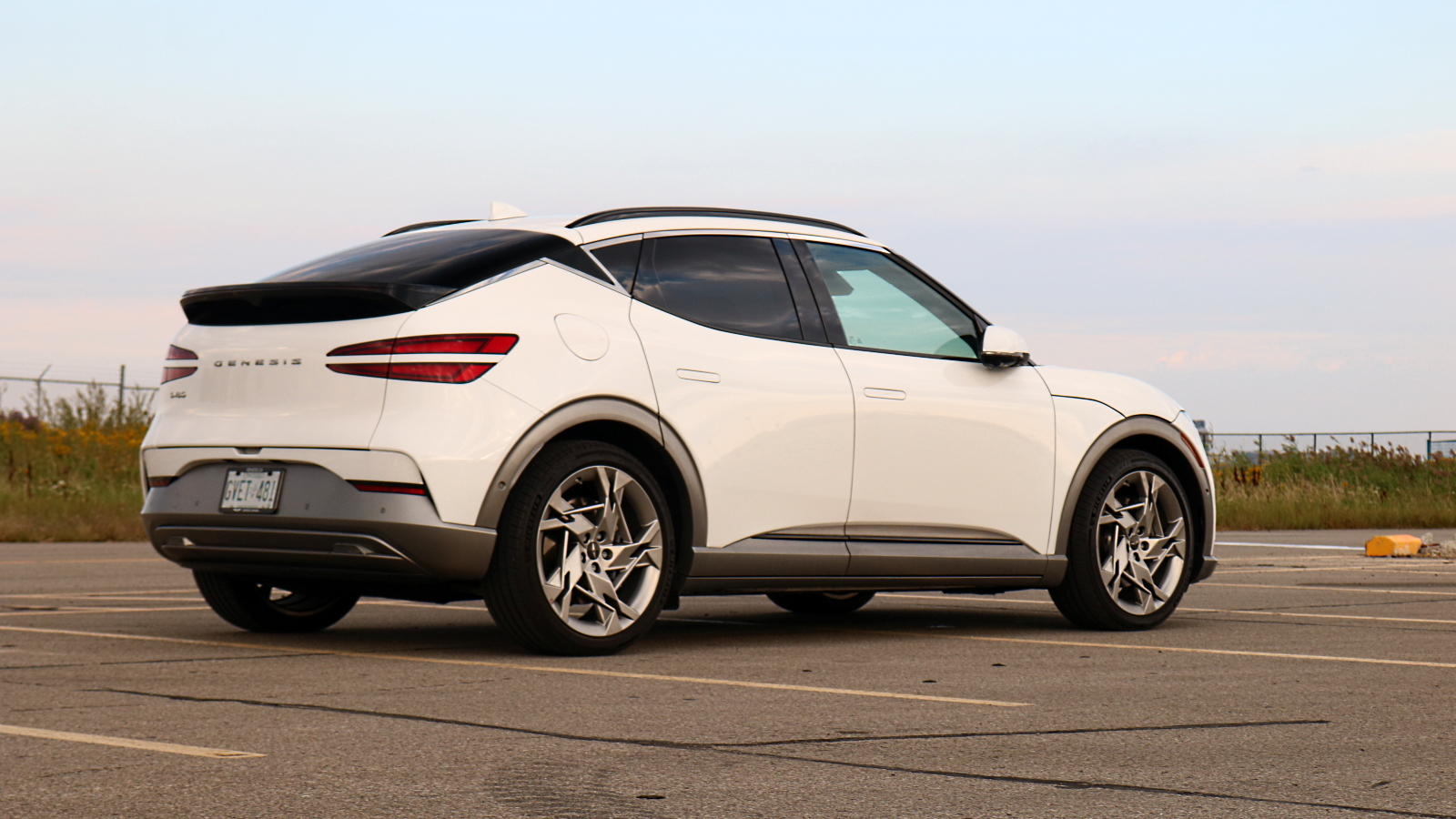 Overall, I’m a huge fan of the GV60’s aesthetic weirdness. It reminds me a bit of a Citroën C4 Cactus in Versace, although I’d rather anthropomorphize it as a captivating toad from the future — a Hypnotoad, if you will. Whether this crossover floats your boat or it’s too strange for you, it’s hard to argue that it’s boring to look at. 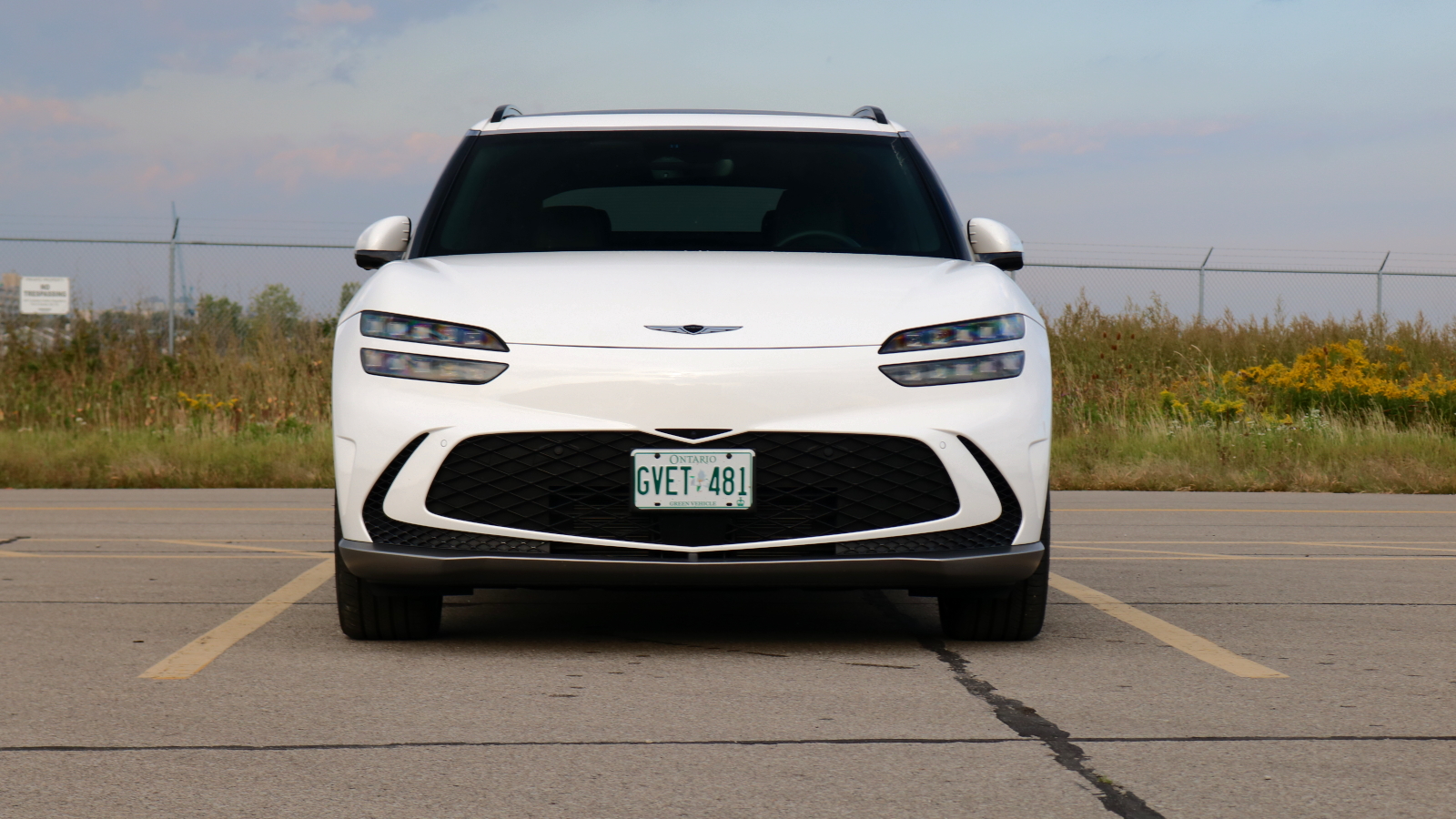 Fucking around normally equates directly to finding out, but the GV60 Performance’s body control is great, and its tires are high treadwear units that have a huge gap between making lots of noise and actually losing traction during enthusiastic driving. The steering doesn’t offer much in the way of texture, but weighting is linear and there’s just enough communication coming through the seat that you can get comfortable throwing it about. Think Porsche Macan more than anything. Granted, a Macan doesn’t weigh 4,890 pounds, so you have to be deliberate if you really want to hustle the GV60. 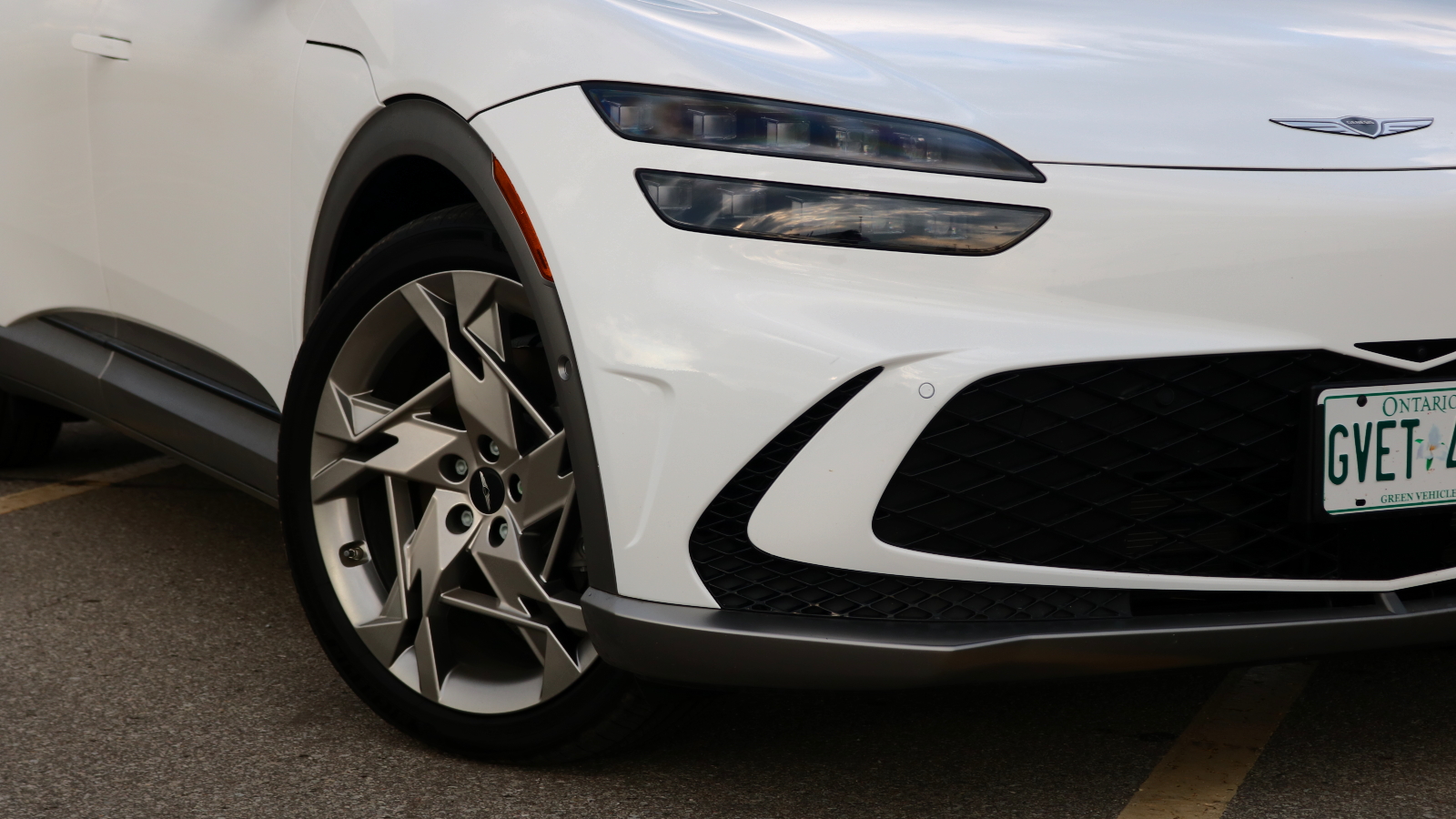 Despite the sheer mass of Genesis’ performance crossover, the brand’s done a good job of gamifying the driving experience. Take the little green button on the steering wheel. Press that, and the GV60 briefly goes from being merely a quick EV crossover to being a 483-horsepower, 516 lb.-ft. of torque Mr. Hyde for ten seconds. However, unlike overboost modes in gasoline-powered cars, there’s no refractory period for the GV60 Performance. Just mash the green button over and over like you’re playing Need For Speed. Of course, range will be abysmal, but why not occasionally trade range for an adolescent ear-to-ear grin plastered across your face?

However, just because the boost button gives an extra surge of electrons doesn’t mean it’s best to leave the line with it activated. If traction control is off, the front tires will spin up like Beyblades, showering everything nearby with a healthy dusting of eau du Michelin. Hilarious? Absolutely. Fast? Not a chance. If you want to even out the tire wear, Genesis has you covered with the sideways baseball cap of performance car technologies – drift mode. Here’s how you activate it: With the GV60 Performance in park, hold the brake, tap the drive mode selector until you’re in sport mode, then hold the stability control off switch for five seconds. From there, hold both steering wheel paddles for three seconds, and you’re in. Whatever happens next is entirely up to you. 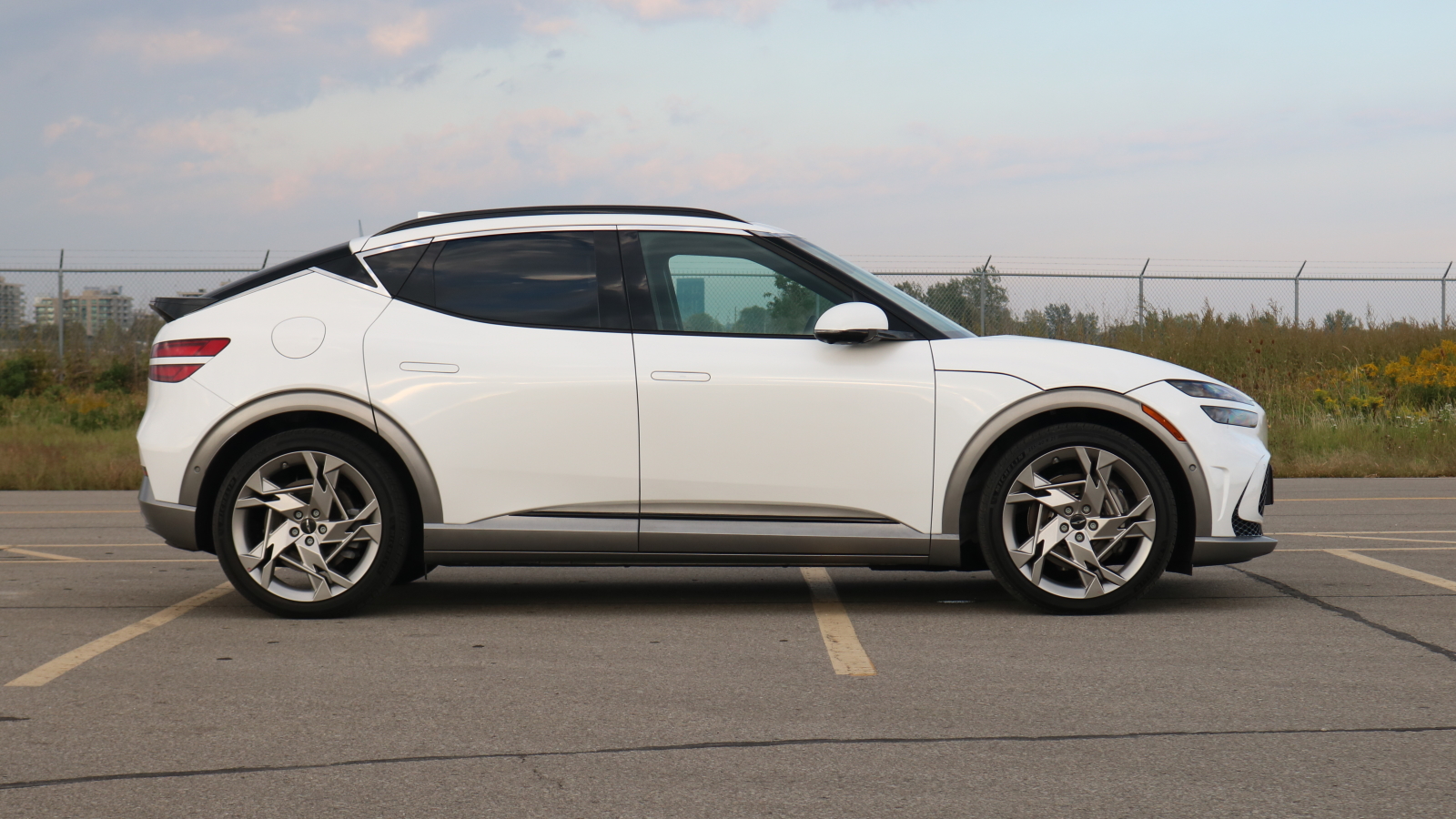 Settle back down to a sensible pace and the GV60 Performance grows cosseting yet buttoned-down, like a sweater cut from very thick cloth. The ride never grows uncomfortable or fussy, the world outside never amounts to more than a hushed hum, and accelerator pedal response relaxes like it’s been slipped a melatonin. This little thing has luxury on lock, despite the power on tap.

If there’s one big downside to the GV60 Performance, it’s efficiency. If you live in a big city and don’t have access to private charging, range from 80-to-10 percent of battery capacity is critical, and this thing trades miles for smiles. Figure around 235 miles (378 km) from a full charge to zero, or around 164 miles (263 km) from 80-percent to 10-percent state-of-charge. An 800-volt architecture helps to replenish the battery pack quickly, but the public charging network can be a merciless thing. 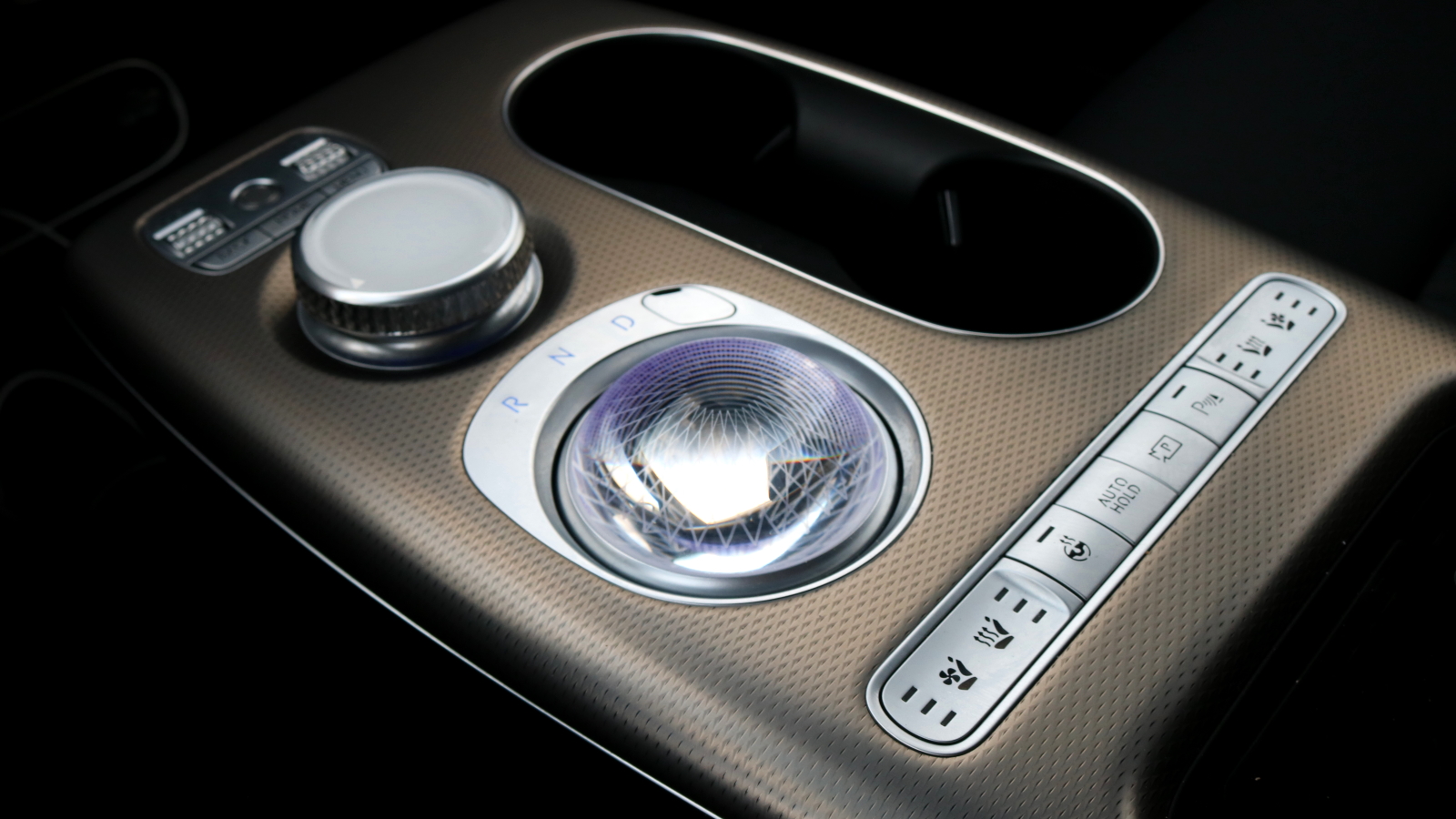 The interior of the Genesis GV60 Performance is a great place to sit whilst pondering your orb. Admittedly, it’s a pretty great orb of cut crystal and adjustable illumination, plus it rotates up to become a shifter once you turn the car on. It’ll attract leagues of juvenile “P is stored in the ball” jokes, but it’s a rather cool bit of design. One can only hope that Genesis has avoided the TC by Maserati issue of refraction setting bits of the interior alight. Mind you, a giant orb isn’t the only strange part of the GV60’s cabin. The dome atop the passenger grab handle unscrews easily — an unusual compartment if ever I’ve seen one. 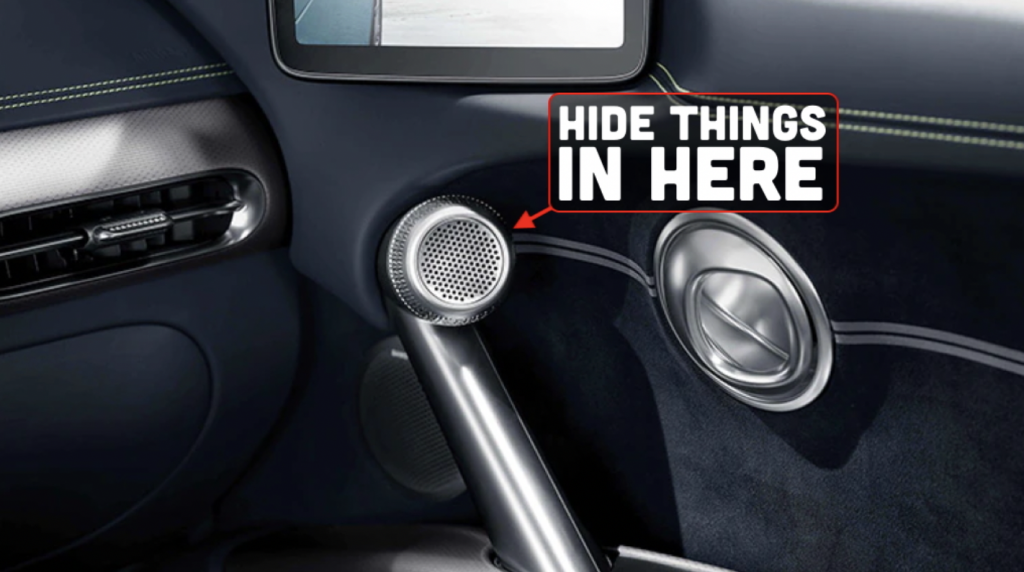 As for the rest of the interior, it’s sensible, minimalist, and quite spacious. Clever things to make life easier. For starters, the door card inserts come with the sort of reflective pinstriping you’d see on old tracksuit bottoms, presumably so that other cars will know your door is open at night. The false floor in the cargo area has a separate, smaller lift-up flap to access charging cable storage. The glovebox is a drawer so you don’t spill all your stuff on the floor the moment you open it. Simple stuff, but it makes a huge difference. 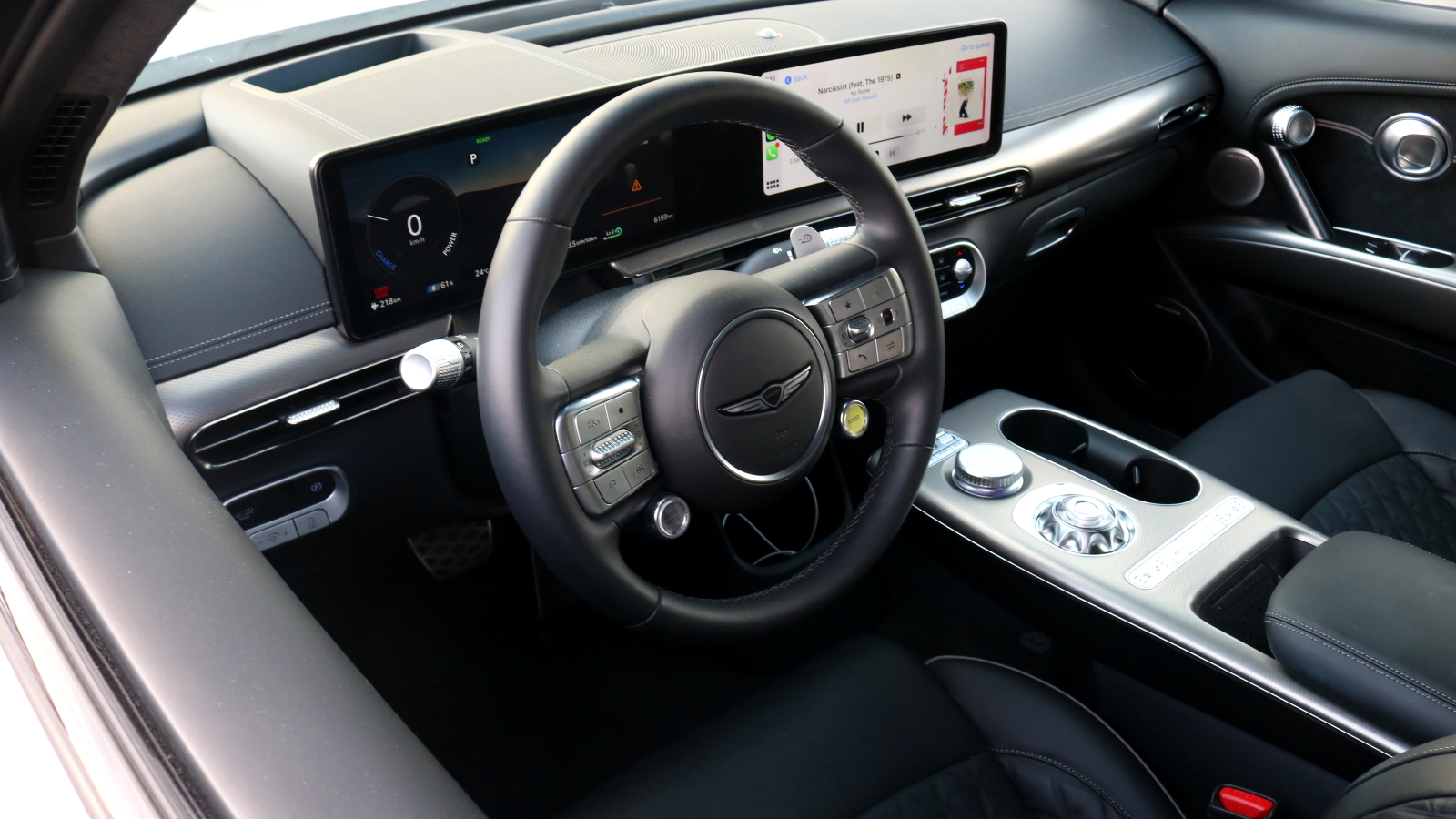 Regarding infotainment, it’s a slick all-Genesis UX with very little in common with the infotainment systems in the GV60’s platform-mates. The portrait-style tiles look brilliant and feel years newer than phone-style grids used by many infotainment systems. What’s more, a rotary knob makes for quick and easy eyes-off use of the system once you’ve acclimated to the menu structure. However, the rotary knob itself feels a little bit cheap, deflecting under jog inputs like a chocolate bar wrapper. Back to the drawing board with that one. In addition, Apple CarPlay can only be used via wired connection which limits the usefulness of the console-mounted wireless charging slot, although there’s a very handy phone bin next to the USB port that keeps your device safely secured whilst on the road.

The GV60 Performance comes with a Bang & Olufsen audio system that features an incredibly weird DSP. Instead of altering traditional bass and treble sliders, drivers must plot a compass with four sound signature descriptors. While novel, I’m not entirely sure if it works very well. The surround mode comes across as shrill and inauthentic, while some odd reverb remains in studio mode. Granted, clarity is fine for the segment, but you might be disappointed if you’re coming from other Genesis products with high-end stereos. 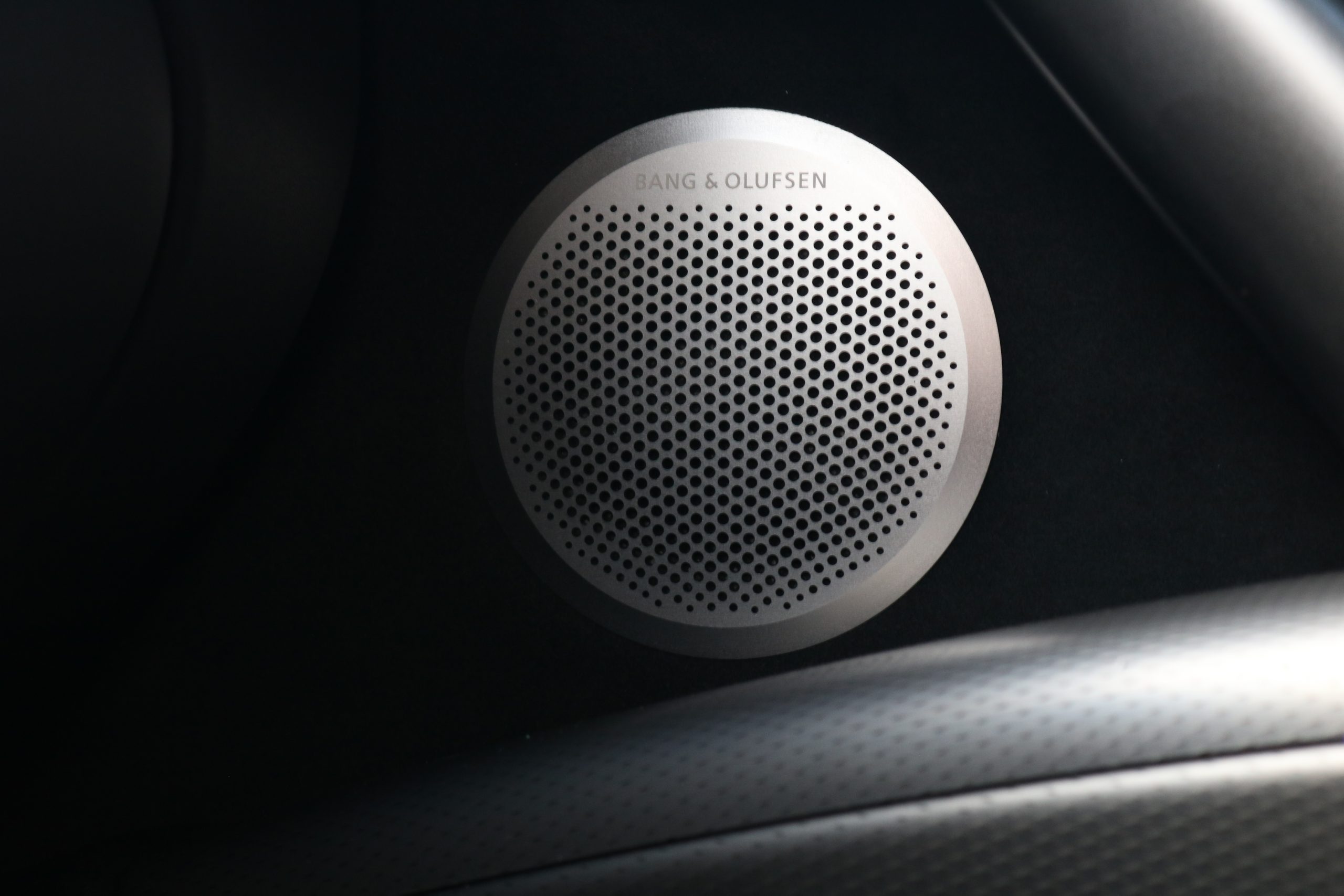 Speaking of tech, the GV60 features a highly unusual use of facial recognition. Walk up to the B-pillar and the car will scan your face to make sure you’re the owner before unlocking the doors. Once you’re inside, just put your fingerprint on the reader and you’ll be able to start the car. While this seems a little dystopian at first, Genesis claims that all data is kept in the car, potentially allaying some fears over data collection.

If there’s one Achilles heel, it’s that the front seats don’t really seem to be designed for humans. You get plenty of lumbar support, massive headrests, and then nothing to put your upper back against. It’s an unfortunate oversight that makes long journeys rather uncomfortable, and a rather puzzling one considering seat comfort is an area in which the GV60’s cheaper platform mates shine. 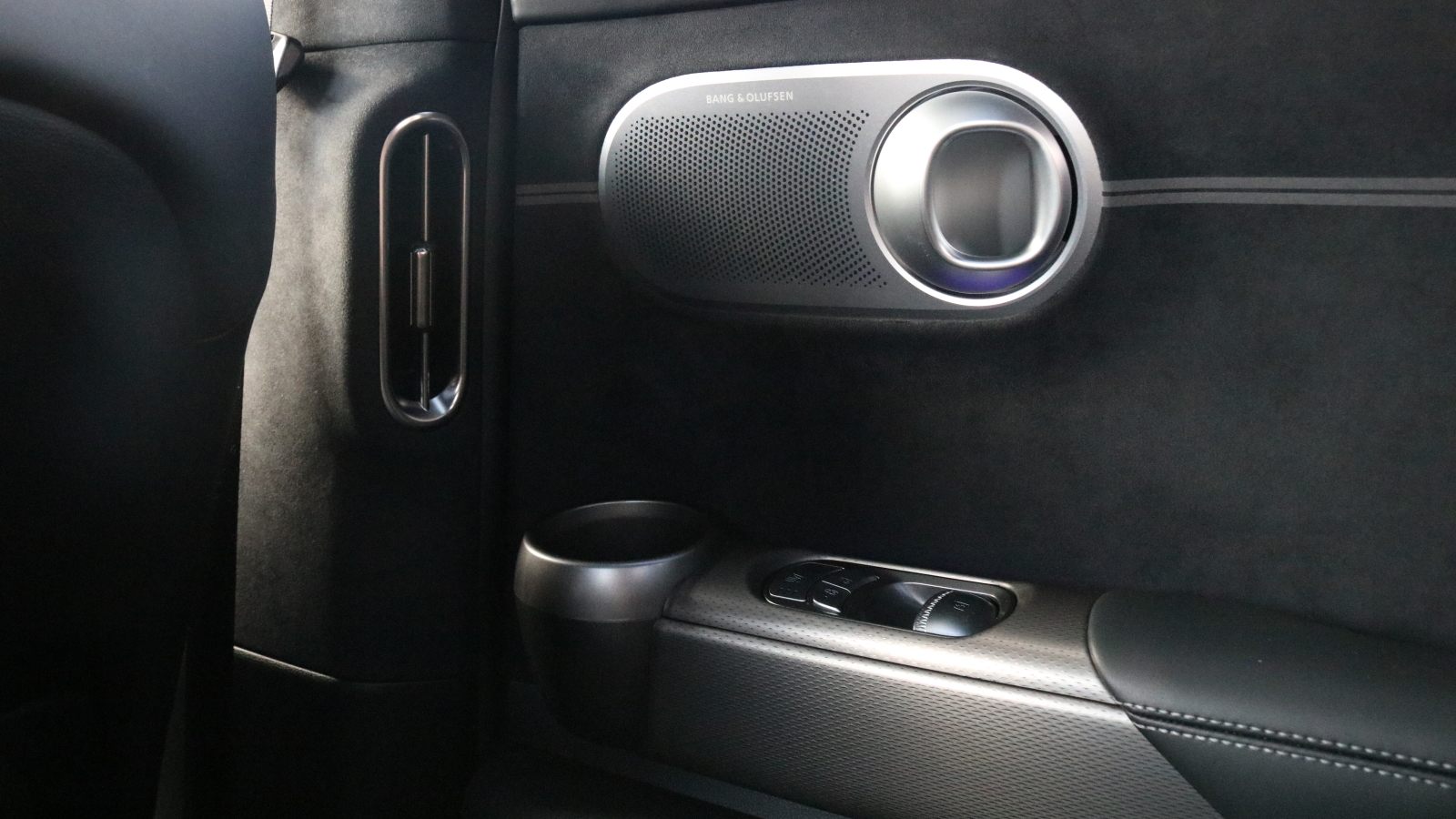 Although the front seats aren’t anything to write home about, Genesis has given plenty of thought to rear seat passengers. Despite the high floor, space is ample, while a few clever touches ensure that rear seat passengers can ride in comfort. Instead of putting air vents low on the console, Genesis has placed them in the B-pillars to blow cool air on passengers’ faces. Alternatively, the air vents can be used to cool drinks in the door armrest-mounted cup holders, a brilliant placement that means passengers can still have open iced tea cans even with the rear bench fully occupied. 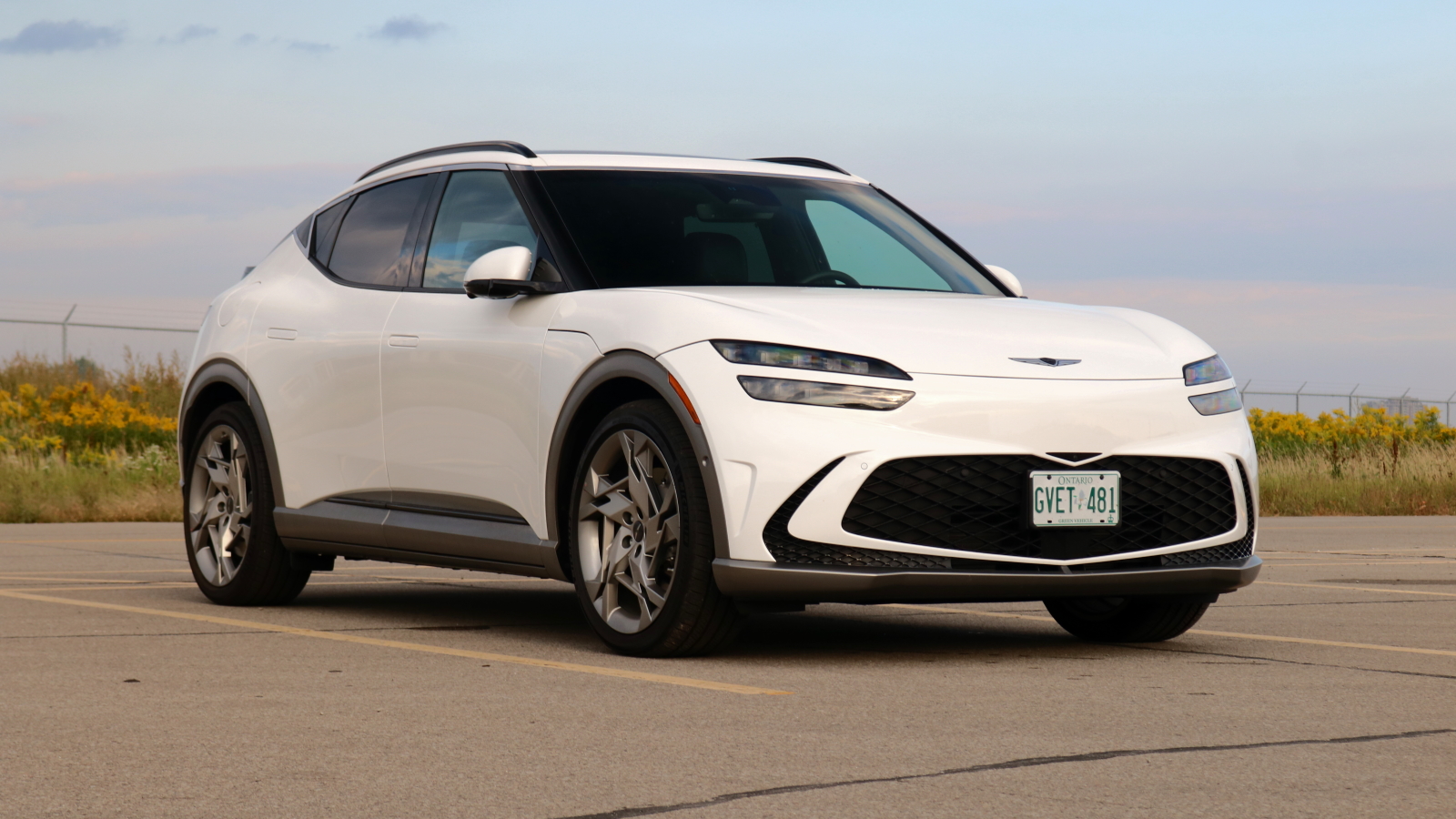 The Genesis GV60 Performance is astounding. Its chassis tuning feels, to me, miles ahead of the Tesla Model Y, and its ornate design makes that Silicon Valley competitor feel quite dull. The Mustang Mach-E GT is wildly entertaining, but the GV60 Performance beats it in poise. The Genesis is a metallic dinner jacket to the Mach-E GT’s mildly vulgar graphic tee. Bold, yet refined in the right setting.

Granted, the EV market moves quickly, and more competition will soon be on the way from the likes of Porsche and BMW. Until then, the GV60 Performance is the quick electric crossover to buy. Sure, the Genesis is a lot of money, but $69,385 is about the same as a loaded-up BMW X3 M40i, so it’s certainly not an egregious price tag considering the GV60’s traditional competition. Compared to its electric competition, the GV60 Performance just undercuts the Ford Mustang Mach-E GT and the Tesla Model Y Performance, although it doesn’t qualify for federal rebates under the Inflation Reduction Act. Still, it feels worth the extra post-rebate cost with an interior that’s simply nicer than its current electric competition.

Who Should Buy It? 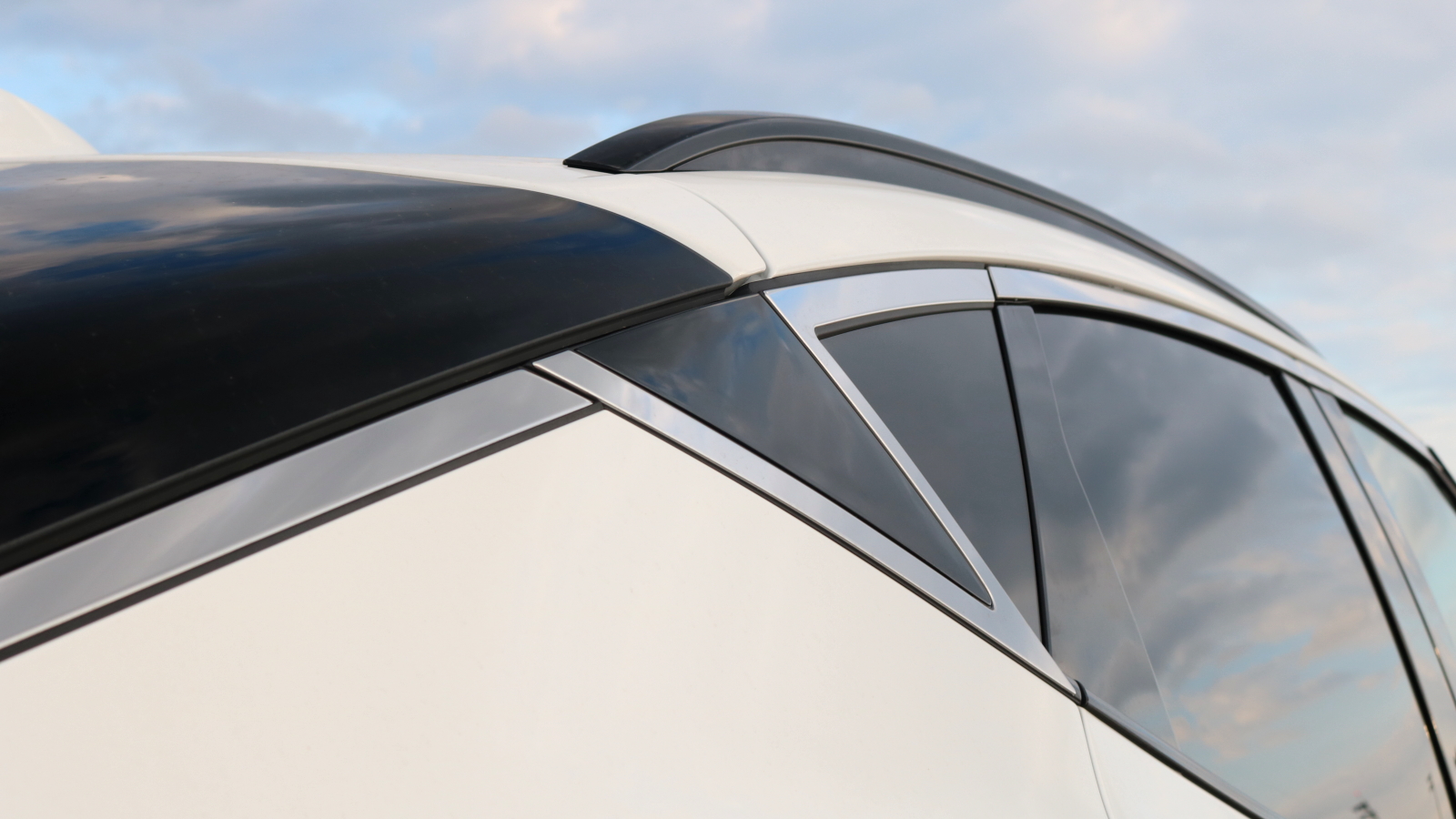 Thomas is a Nu Rave-blaring, heel-toe downshifting, maple syrup-swilling, chassis-geeking, junkyard parts-hauling, floppy-haired scenester who's been writing about cars since college. His current ride is a 2006 BMW 325i with the six-speed manual gearbox. Instagram: @thomas.hundal Twitter: @thomashundal
Read All My Posts »
PrevPreviousHere’s A Look At The Only EV Roadster You Can Buy Today Thanks To Wacky Latvian Car-Customizer ‘Dartz’
NextDodge Neon ACR Racing Champion Tells Us Why The First-Gen Neon ACR Was A Wolf In Economy Car ClothingNext