We’re barely into 2023, but like many of you, I’m still fixated on some of the details of the year that just passed. Most significantly, I have been eagerly awaiting the American Synthetic Stench Mobility Union National Commendation Honors (ASSMUNCH) awards for superlatives and excellence in the field of car air fresheners. While everyone out there is reporting on the 2022 Stench Of The Year (Menthol Mule, no surprise there), I’m more interested in one of the foundation’s more niche awards: the Most Least Popular Car Air Fresheners. This year, a solid dozen made the list, the most since the Pandemic killed demand for car air fresheners in 2020 because nobody could smell for shit because of all the Covid. The industry has clearly bounced back, boasting twelve of the most popular scents almost nobody bought.

Let’s go through each Winner of the Losers, one by one! Hot damn, right? 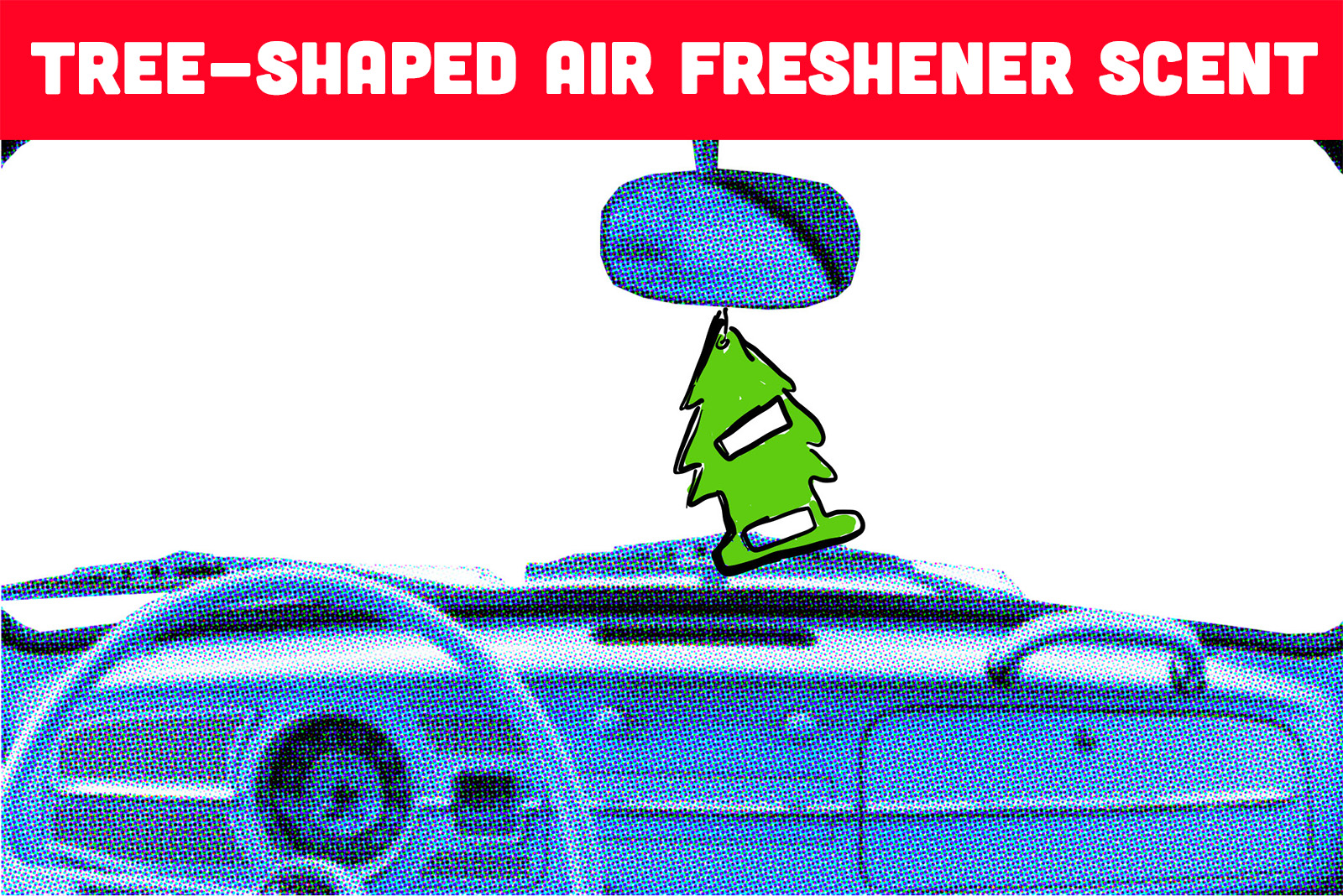 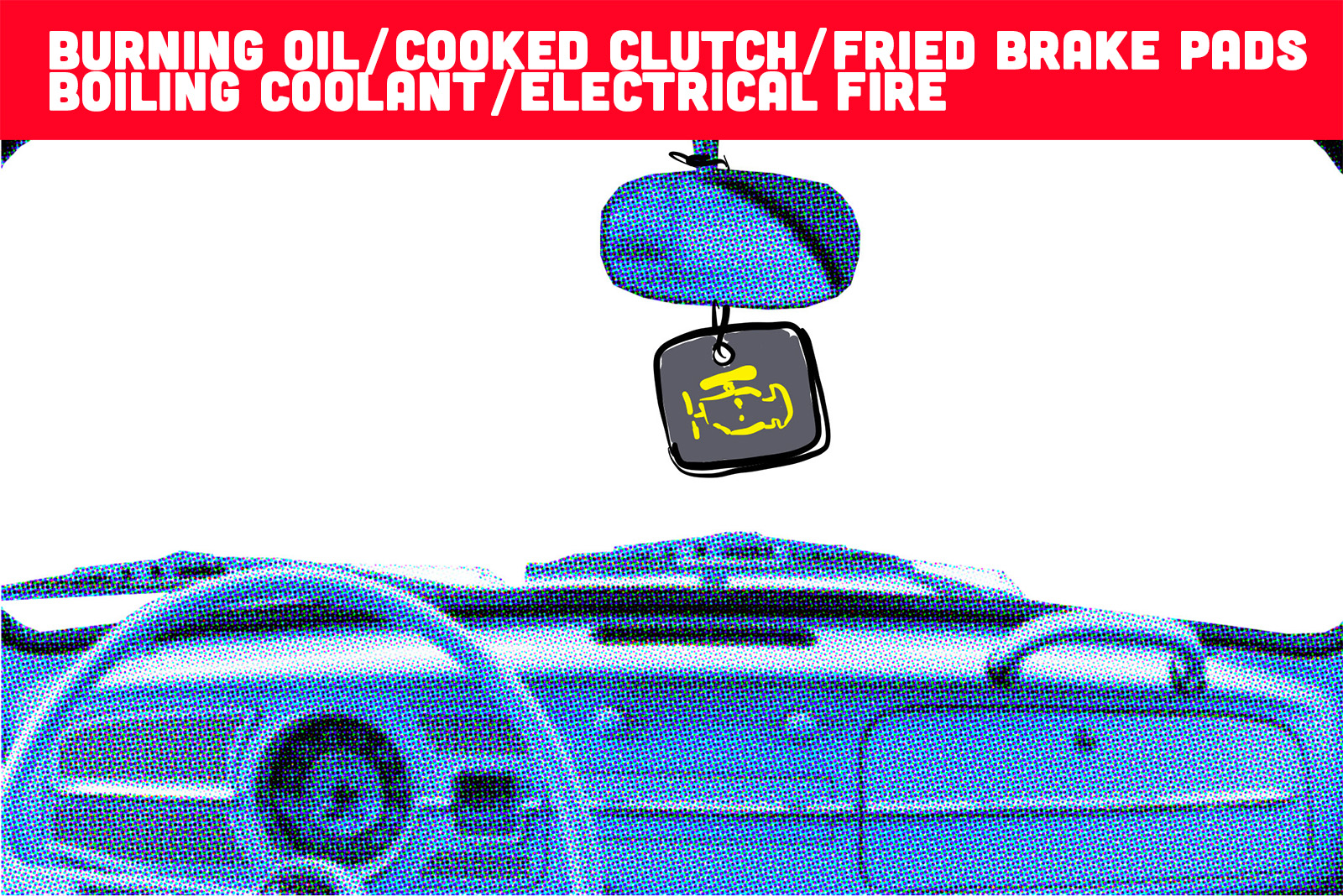 While praised for its uncanny accuracy, nobody seems to have wanted their car to smell like it was burning oil while the clutch was slipping and the brakes were cooking and the car was overheating, all during a pretty severe electrical fire. Plus, lots of people complained about headaches and general anxiety. 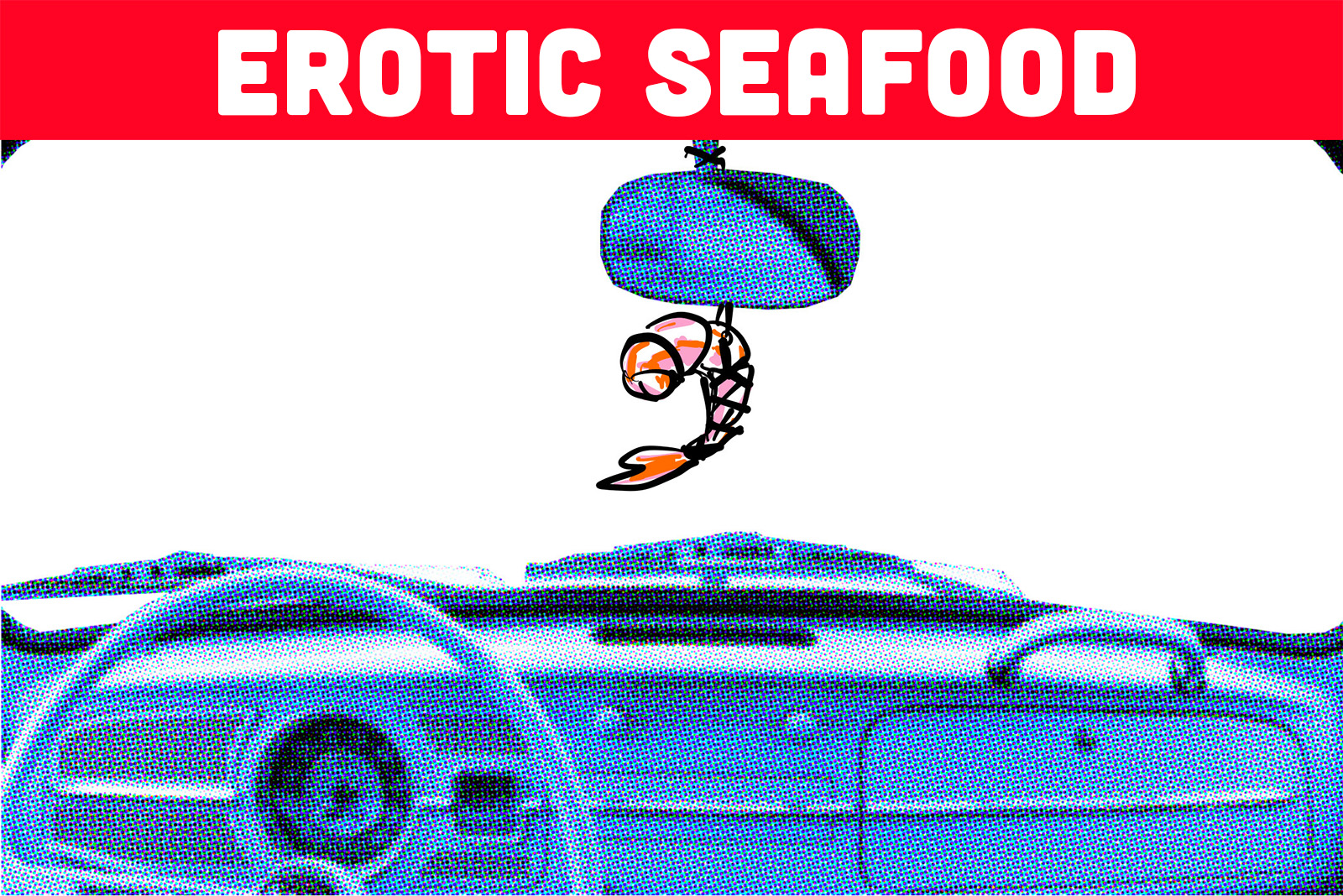 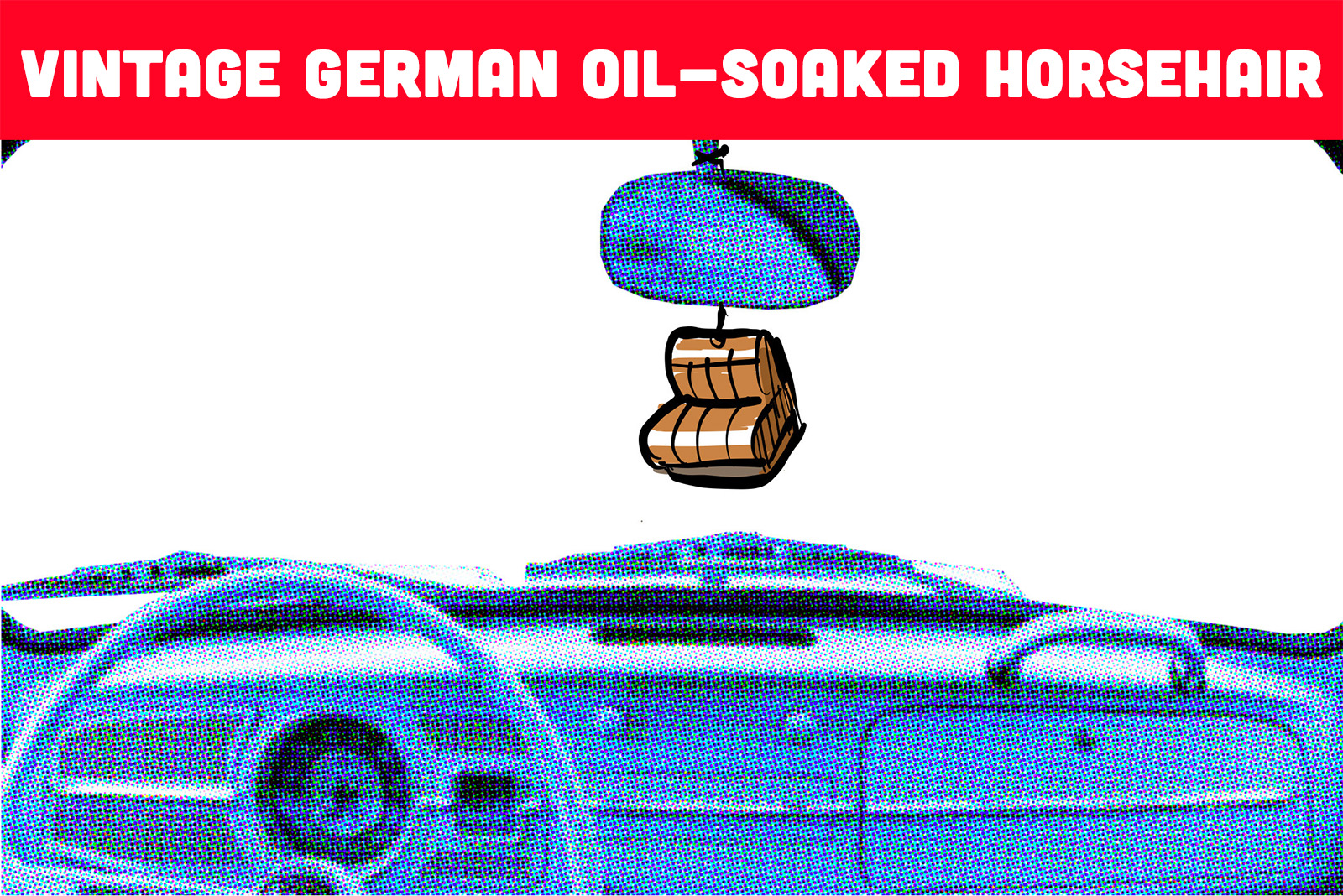 This one actually did find a niche market of people who used to drive old air-cooled Volkswagens or Porsches, or 60s-era Mercedes-Benzes and had recently switched to a more modern car, but still craved that smell of horsehair seat filling mixed with the near-constant smell of motor oil. I bet many of you can smell it right now.

Latke Fantasy was a joint promotional air freshener from the Idaho Potato Grower’s Union, the Midwest Judaic Outreach Council, and the estate of J.R.R. Tolkien. The attempt to combine these concepts ended up becoming a flying Judeo-Elvish latke that hailed from Middle Earth and had near-wizard like powers, but not enough people read the tiny print on the back of the freshener to understand the backstory, and, worst of all, it smelled kind of like a hash brown soaked in patchuli. 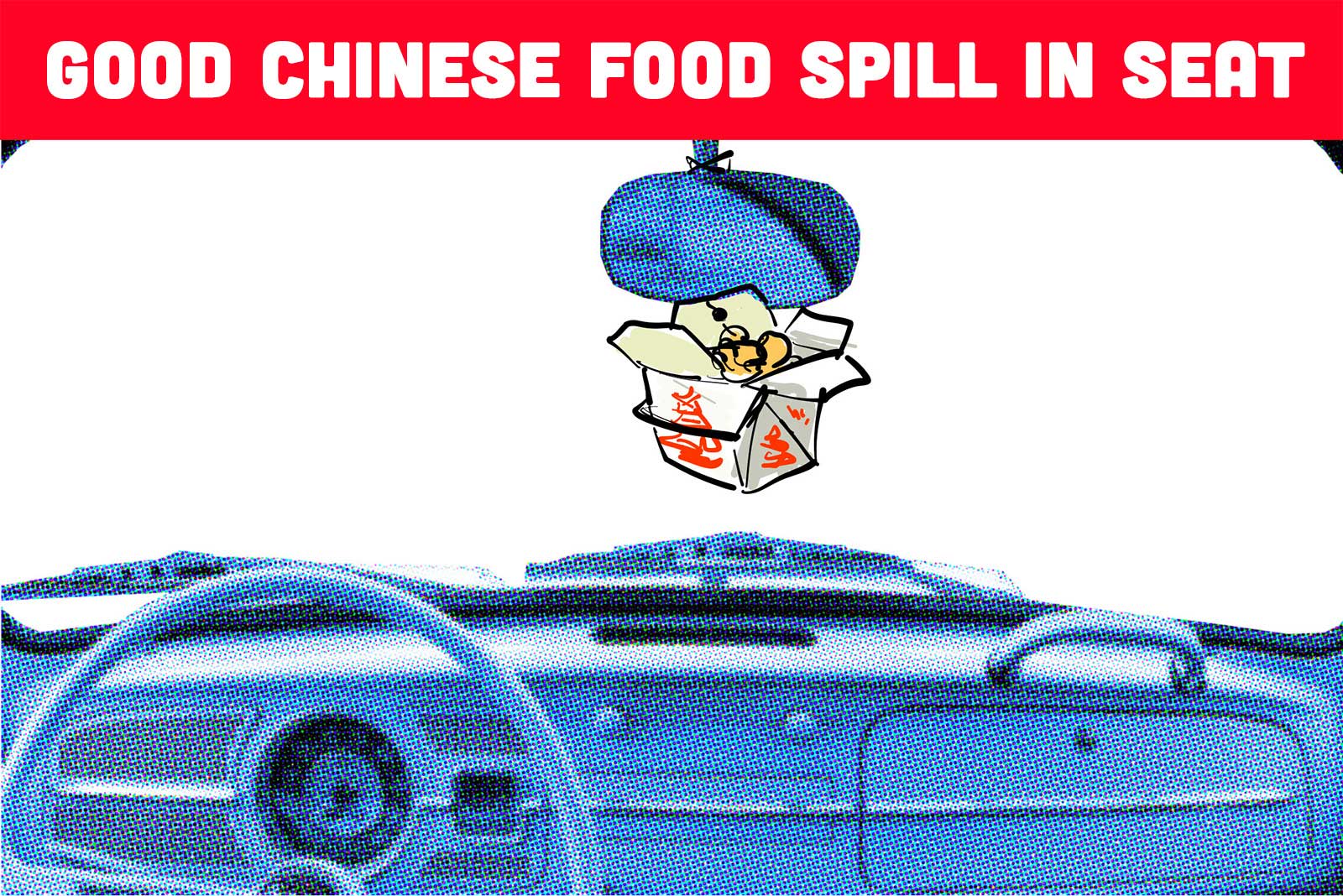 This air-freshener was designed to smell like really top-notch Chinese food just overturned in your passenger seat, soaking the fabric in rich, delicious sauces and bits of vegetables, spices, and meats. It just made people too damn hungry. 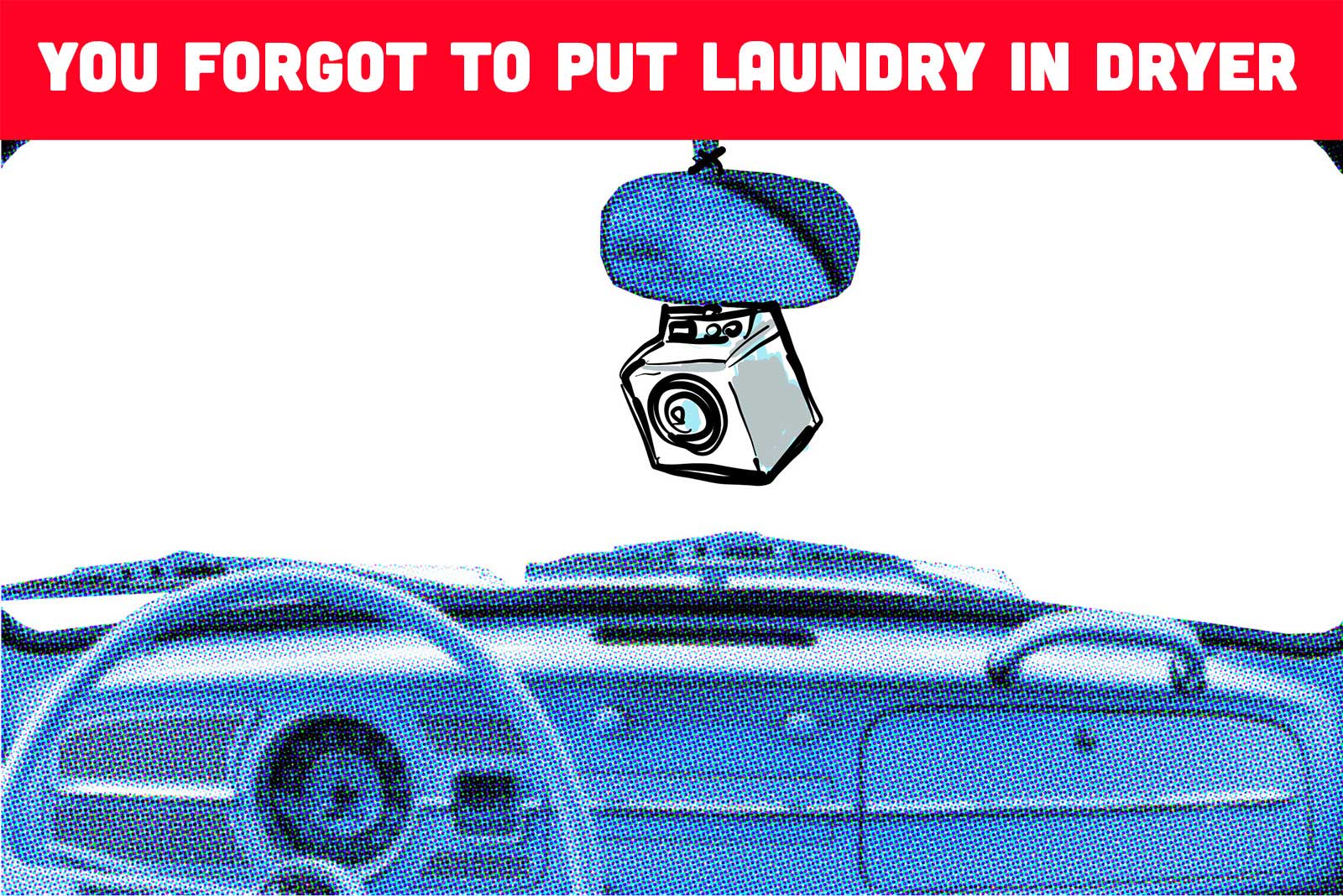 This sour-smelling, slightly musty air freshener scent proved once and for all that nobody wants an air freshener that seeks to guilt and cajole you about housekeeping mistakes people may have made. Some people felt it proved a useful reminder for them to get clothes out of the washer, but most people just hated both the smell and the nagging implications. 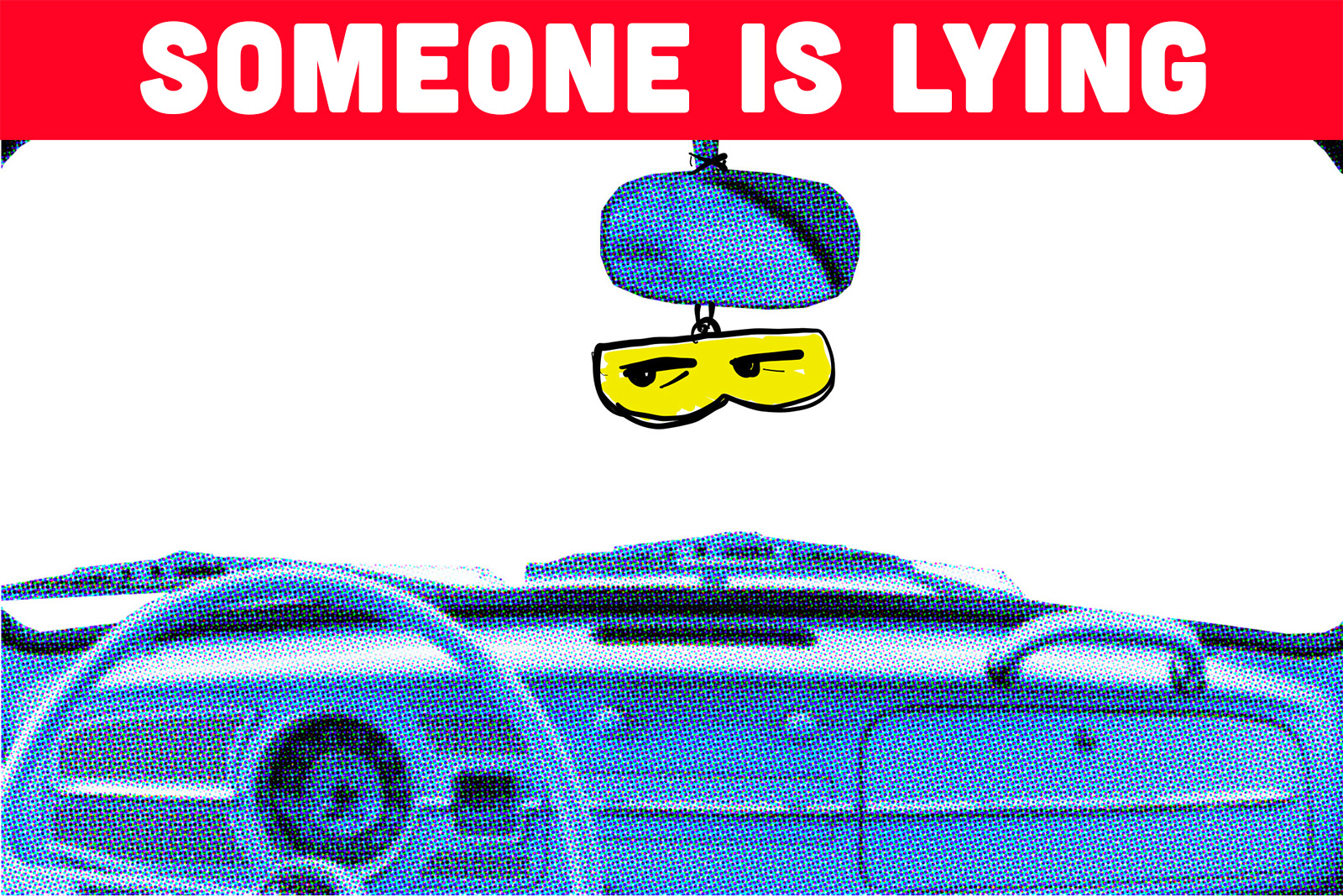 An air freshener that combines the scents of body odor, fear, and duplicity was an impressive technical achievement, but proved extremely unpopular in the marketplace. 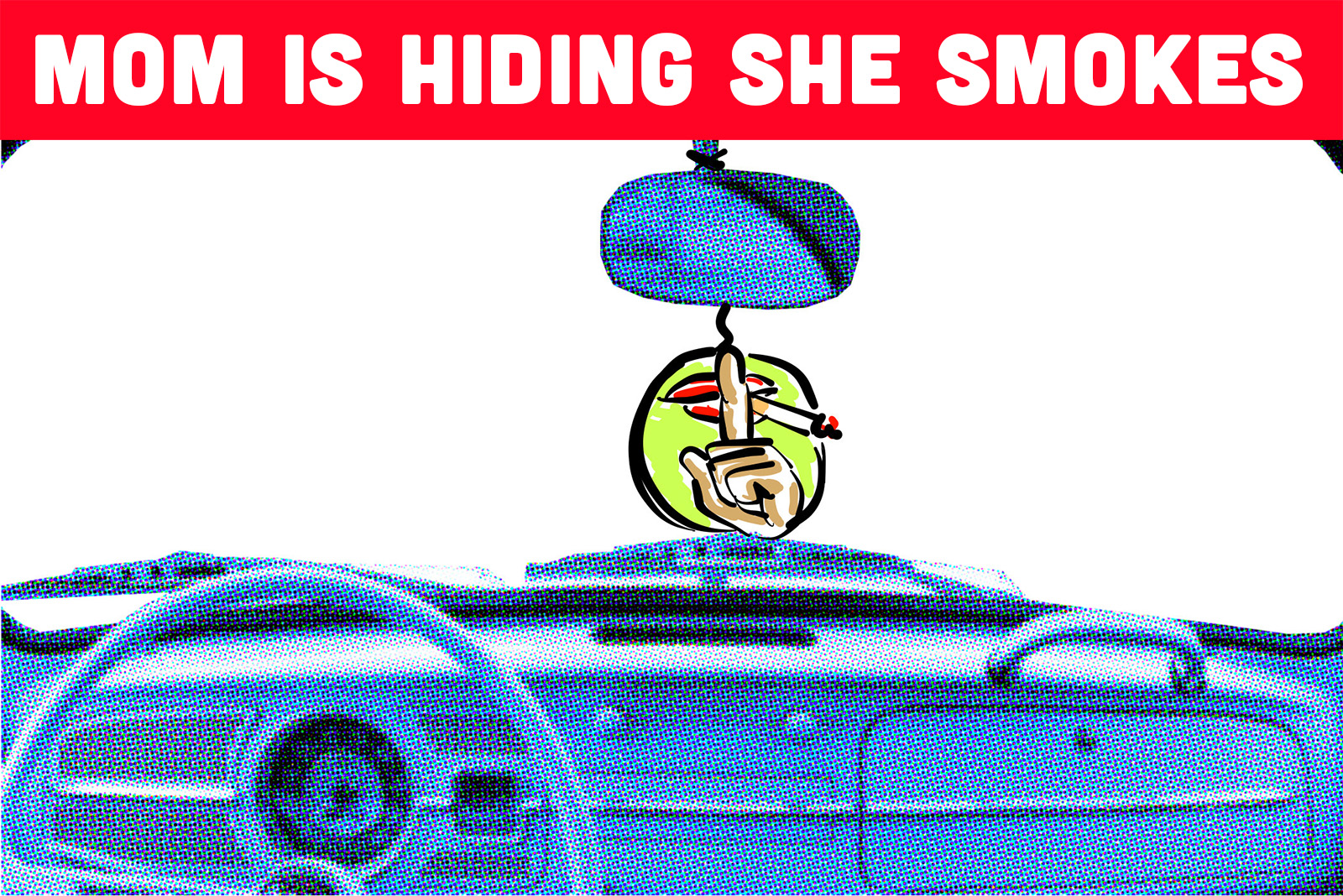 A combination of stale cigarette smoke and lots and lots of Febreeze, this one was taken off the market due to a joint lawsuit on behalf of RJ Reynolds Tobacco and the Febreeze Royal Family of Febreezistan. 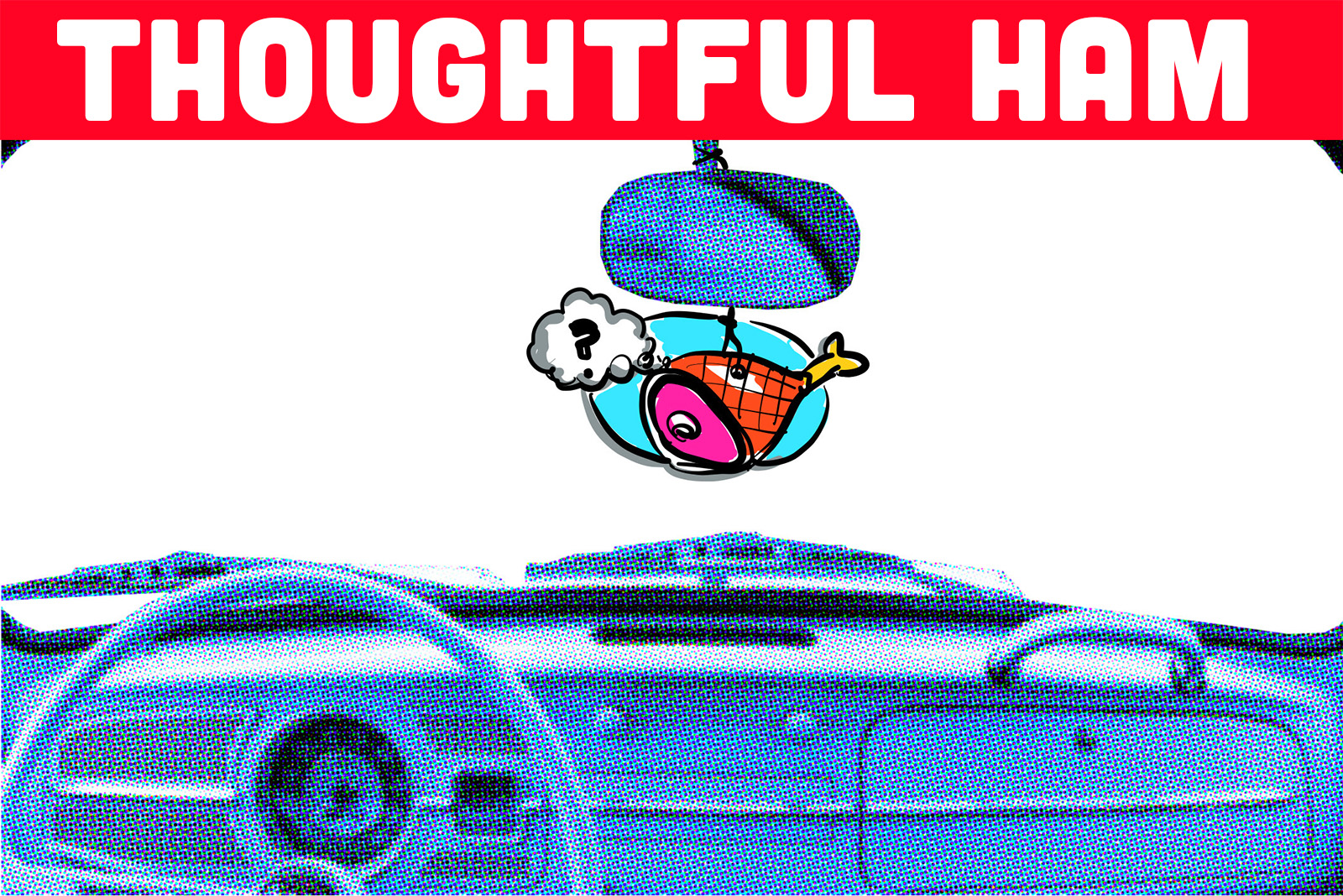 The Thoughtful Ham air freshener was expected to be a runaway hit, as olfactory scientists had finally perfected a method of making pork scents seem insightful instead of insolent, as they had been for decades. Unfortunately, the air-freshener-buying public had moved on, and was no longer as obsessed with complex pork-and-cognition-related scents, a real shock to watchers of the industry. 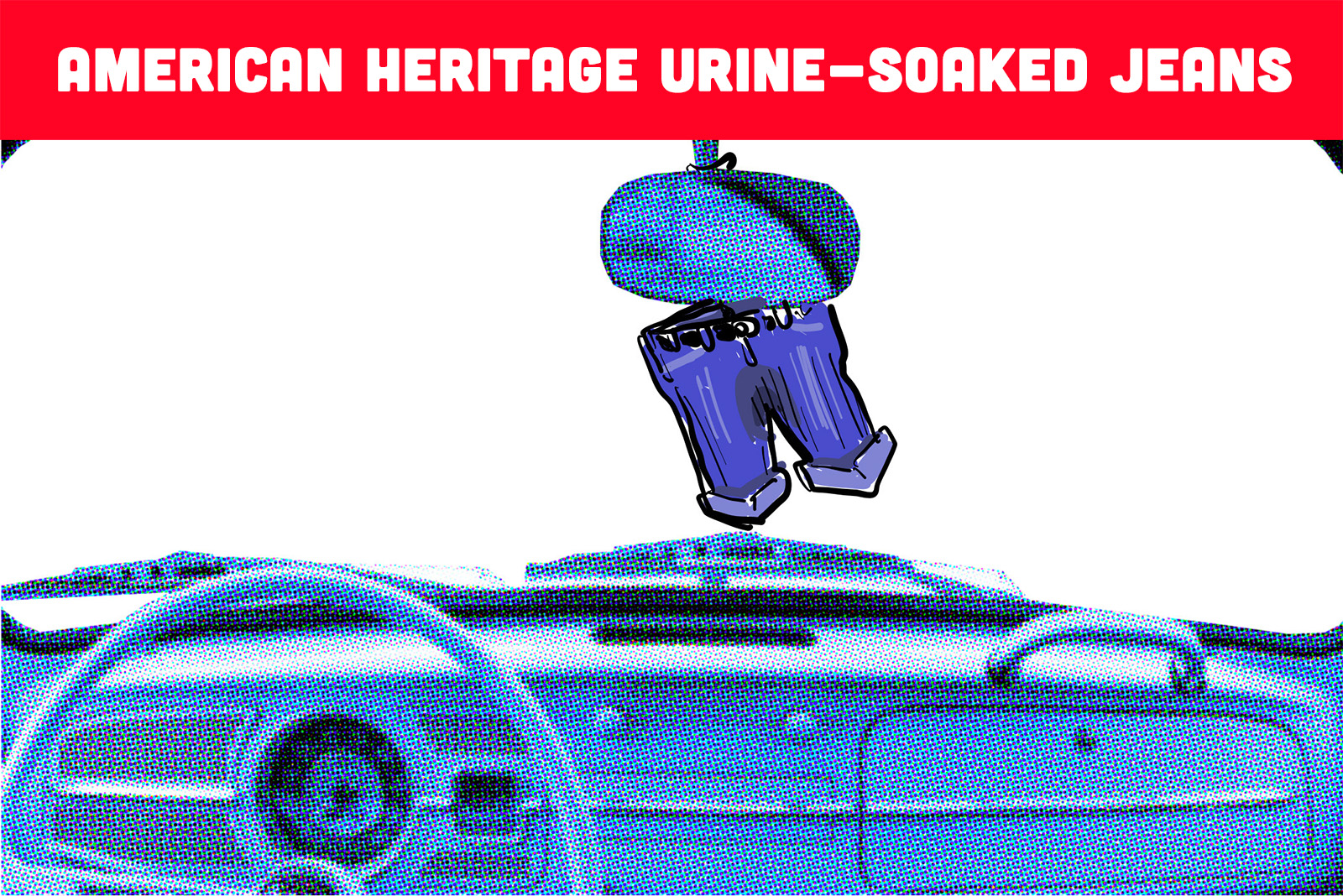 An attempt to appeal to patriotic Americans, this very bold air freshener combined the American icon of a pair of well-worn blue jeans, but, in a misguided attempt to make it feel more “genuine,” the smells of heavy, redolent urine were mixed in, as though the jeans had suffered innumerable soakings over a period of days. While popular in some niche fetish markets, this proved a flop. 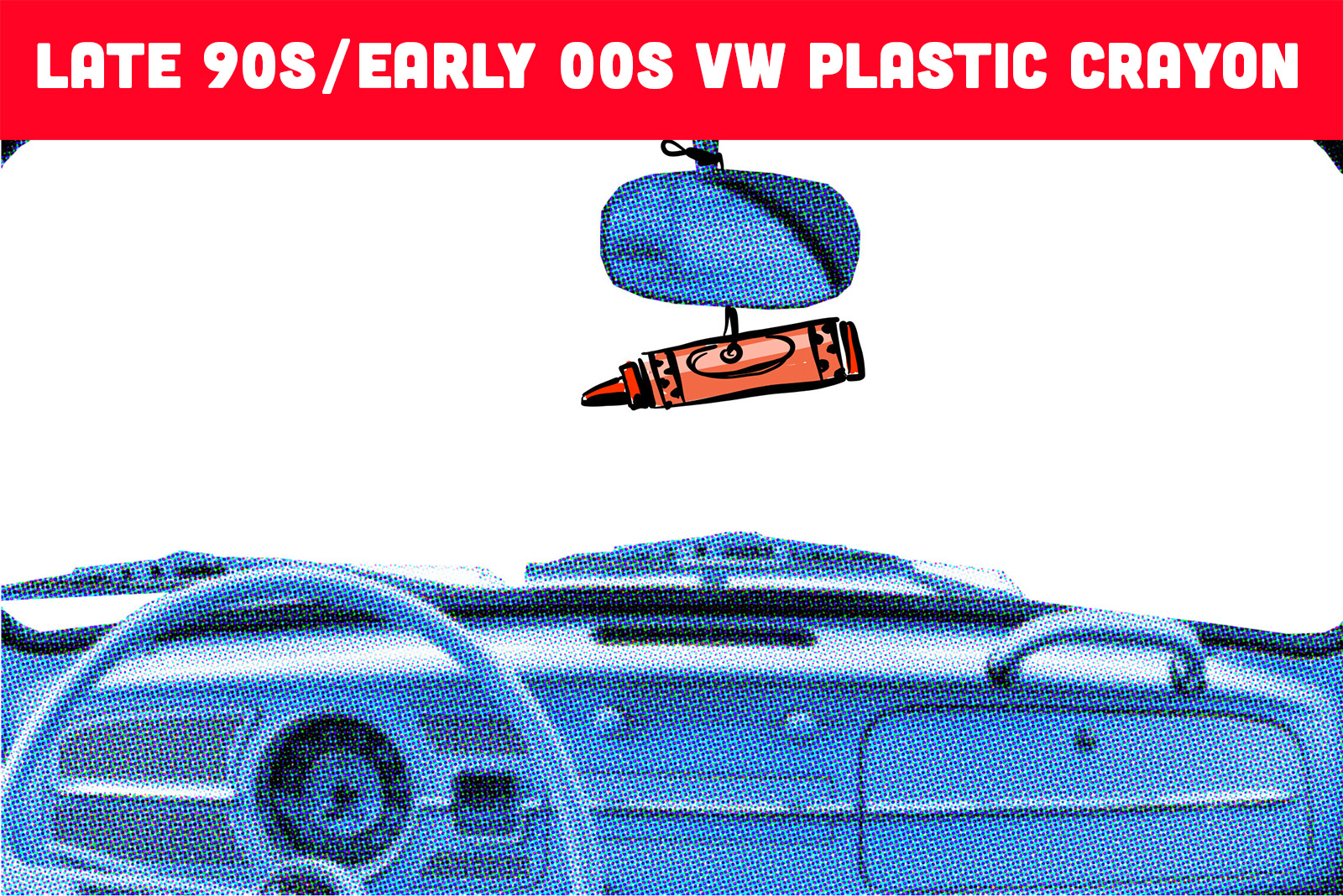 This air freshener was guaranteed to make any car smell like a 1990s to early 2000s Volkswagen (and some Volvos) interior, heady with the rubber off-gassing scents that smell just like crayons. Seems the nostalgia for this smell was overestimated.

How many did you guess right on the list? With our readers, so invested in the car air freshener world, I bet a lot, right? Right?

I'm a co-founder of the Autopian, the site you're on RIGHT NOW! I'm here to talk to you about taillights until you cry and beg me to stop, which I absolutely will not. Sorry. Hug? Also, David's friend.
Read All My Posts »
PrevPreviousCallaway C12, Pontiac Firebird Trans Am, Yamaha RD350: Mercedes’ Marketplace Madness
Next2022 Subaru WRX Owners Are Finding RTV Clogging Their Oil Pickup Tubes But It’s Not Clear How Big Of A Deal It IsNext