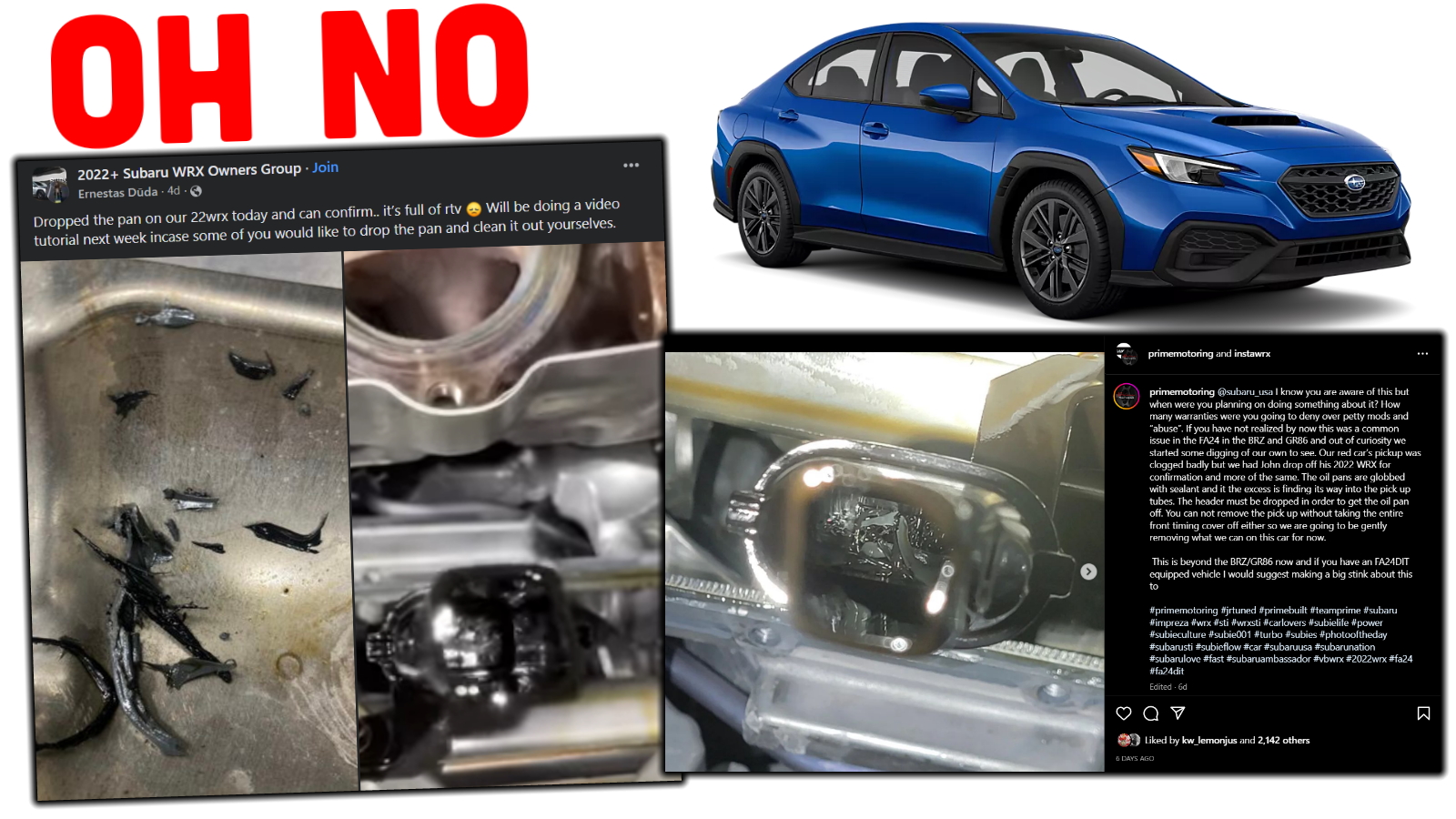 Subaru reliability is a common joke in car circles, but not all models are bad news. The FA20F in the old WRX is quite reliable at stock power levels, plus the FA20D in the Mk1 BRZ seems alright aside from valve spring issues on 2013 models. However, just when it felt like Subaru had turned a corner, some 2022 Subaru WRX owners are experiencing a concerning issue, other than being made fun of for plastic cladding.

The problem is something Mk2 Subaru BRZ and Toyota GR86 owners are growing all too familiar with – excessive RTV sealant clogging the oil pickup tube, potentially resulting in engine failure due to insufficient oiling. So why cover it now? Well, up until very recently, it was thought to be isolated to the BRZ’s FA24D engine, but that’s clearly not the case.

First, a primer on RTV. It’s a silicone sealant with RTV standing for Room Temperature Vulcanization, meaning that it cures at room temperature. Subaru doesn’t just use RTV on the oil pan; the stuff is also used on the timing cover, between the halves of the engine casing, and in various other locations. Strategically-applied RTV is great because it’s relatively cheap, effective, and can seal narrow mating surfaces you’d have a hard time getting a gasket on. It’s also very resistant to high temperatures and doesn’t shrink much — ideal for forming gaskets.

It’s likely a little bit difficult to see what’s going on here, so I’ll break it down for you. While loose chunks of sealant are clogging up the oil pickup screen, they aren’t clogging up the entire thing. Subaru uses a five-sided oil pickup screen on FA24F engines that’s a basket with the silhouette of a Zippo lighter. Even if one face is completely clogged with RTV, there’s still surface area for some oil to move through.

However, RTV impeding oil flow through any part of the pickup tube generally isn’t great. After all, resistance impedes flow. Just because a partially-clogged oil pickup screen can still flow enough oil to keep things happy when puttering about town, that doesn’t mean expected oil flow will be maintained while hitting redline. Plus, an RTV blockage on one facet of the screen could lead to another issue – possible cavitation.

Adding insult to potential injury, Subaru shop Prime Motoring of Wallington, N.J. reports that the level of disassembly necessary to get at the oil pickup screen is fairly substantial. The exhaust header sits in the way of the oil pan, so it must come off first, then the pan has to be dropped to get a good look at the screen. Should you wish to remove the actual pickup tube for a thorough cleaning, the timing cover allegedly has to be removed, meaning several hours of labor to get things right.

What’s more, this isn’t an isolated issue. As you can see from embedded media, StepUp Automotive of Gold Coast, Australia, and American YouTuber Widebody Nation have also encountered this RTV issue, while Prime Motoring has found it on multiple cars, and several private owners have found it on their own time, like this one. While I can’t say that this problem affects all 2022 Subaru WRX models, multiple vehicles on two continents definitely indicates a pattern. 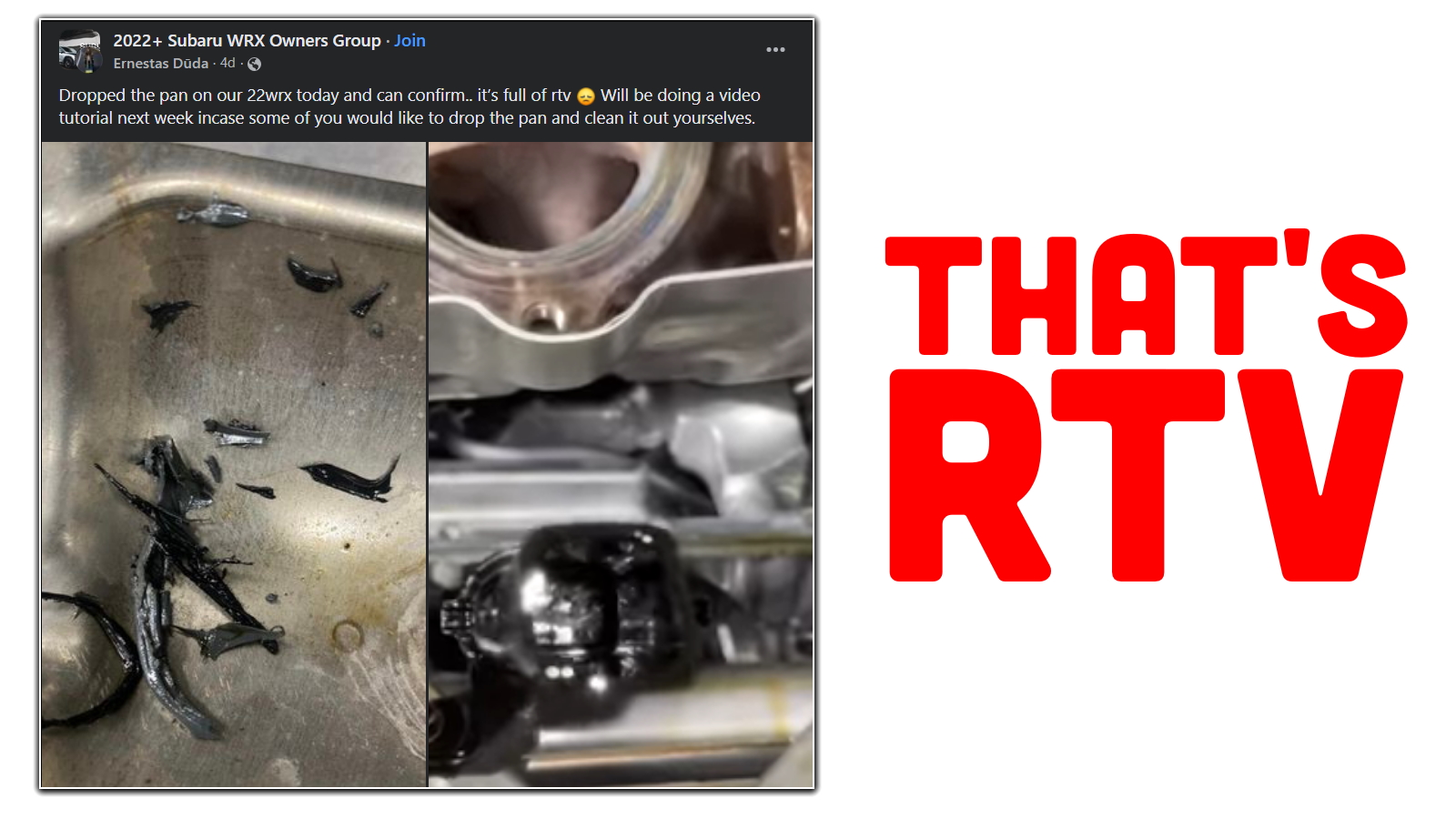 Since the FA24F goes into a significant chunk of the Subaru lineup from the Ascent to the Legacy GT, one could be forgiven for assuming that some sort of oil-deprived death awaits many modern Subarus. However, because of the oil pickup screen design, it’s unlikely that an RTV clog on one side of the screen will present serious issues in the near term; maybe if you’re really tracking your WRX.

So, if you do plan on driving your 2022 Subaru WRX hard, what can you do? Well, it doesn’t hurt to pull the oil pan and clear out any chunks of RTV that may have accumulated, but it’s also not a bad idea to check the oil filter media for debris. It’s a canister-style filter so it’ll need to be cut open, but it should be a good early indicator before things get really bad. Also, it’s possible for bits of RTV to end up on the dipstick, so frequent checking of oil level isn’t a bad idea.

This RTV problem also an issue that Subaru Ascent, Outback XT, and Legacy GT owners may want to watch out for as mileage racks up, but 2022 Subaru WRX owners should be especially mindful given how the WRX is meant to be driven. Still, clear the RTV out every so often, and you should be sideways on gravel for years to come.

Thomas is a Nu Rave-blaring, heel-toe downshifting, maple syrup-swilling, chassis-geeking, junkyard parts-hauling, floppy-haired scenester who's been writing about cars since college. His current ride is a 2006 BMW 325i with the six-speed manual gearbox. Instagram: @thomas.hundal Twitter: @thomashundal
Read All My Posts »
PrevPreviousThese Are The Most Least Popular Car Air Fresheners Of This Past Year
NextSomeone Snuck A Canadian Mercedes-AMG A35 Hatchback Across The Border And It’s Now For Sale In AmericaNext