I feel the same way about obscure vehicles that are powered by air-cooled Volkswagen engines that my dog does about anything found on the ground that once emerged from an animal’s anus: it demands immediate and intense focused attention. I’ve certainly written about many of these in the past, but somehow I’ve encountered yet another one I’d missed before, and this one features a technical detail I’ve only seen on one of these strange VW flat-four-powered things before. It’s a fascinating, strange, and simple workhorse of a vehicle called a MIAG Motor-Karren, so position yourself over the nearest fainting-couch and get ready to be wowed. 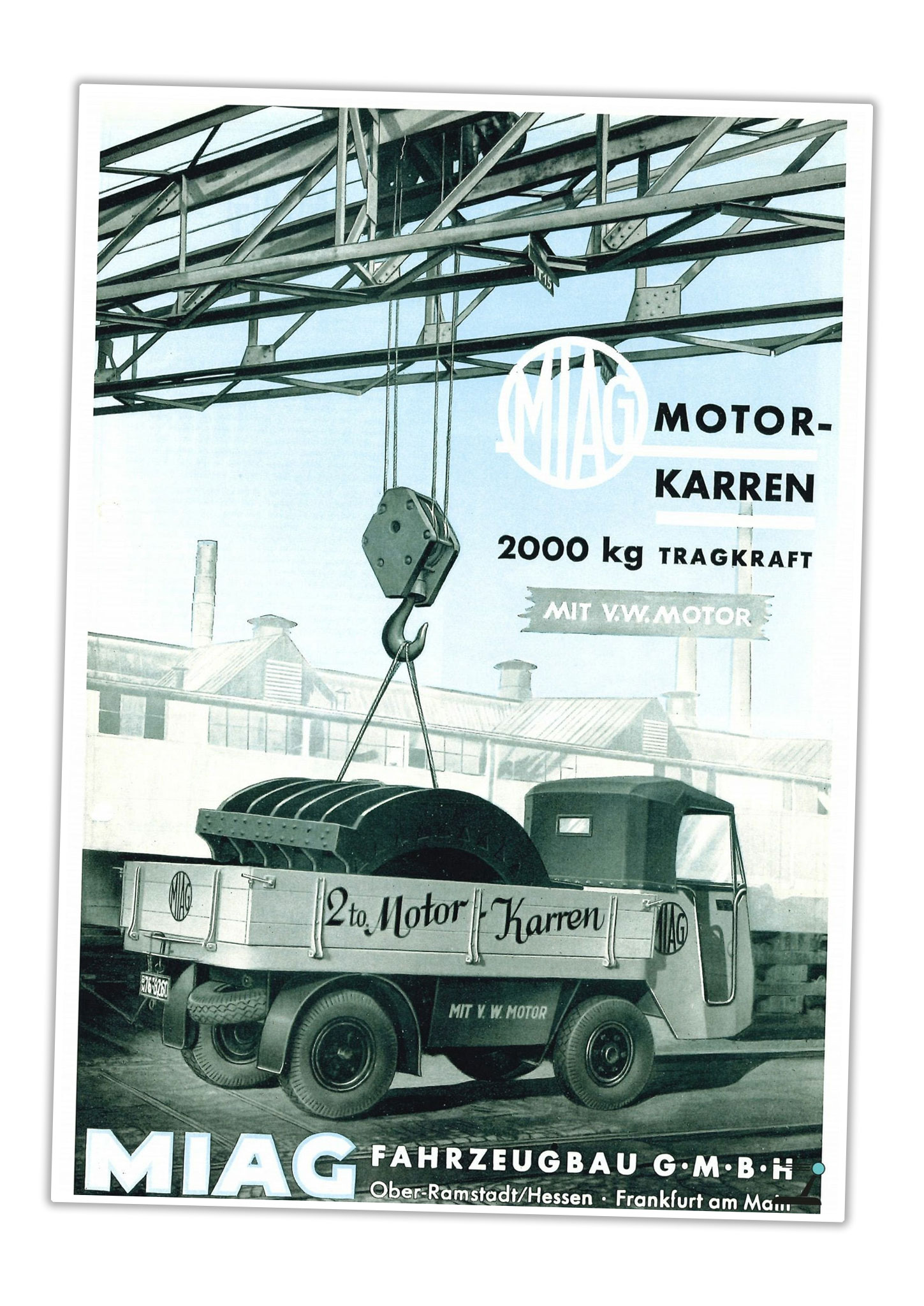 As you can see the by the pictures, the MIAG was a luxurious, refined, high-speed, long-distance Autobahn burner, an early 1950s GT car, one that rivaled – okay, okay, I can’t keep that up. Of course it’s not that. It’s the exact opposite: a low-speed, heavy-hauling little work beast.

These are the sorts of machines MIAG has been making since about 1922: tractors, haulers, forklifts, basically things to move other things. The company is still big and huge and thriving today, and on their history section I learned fascinating things like, somehow, the first “explosion proof” diesel forklift didn’t come out until 1962? 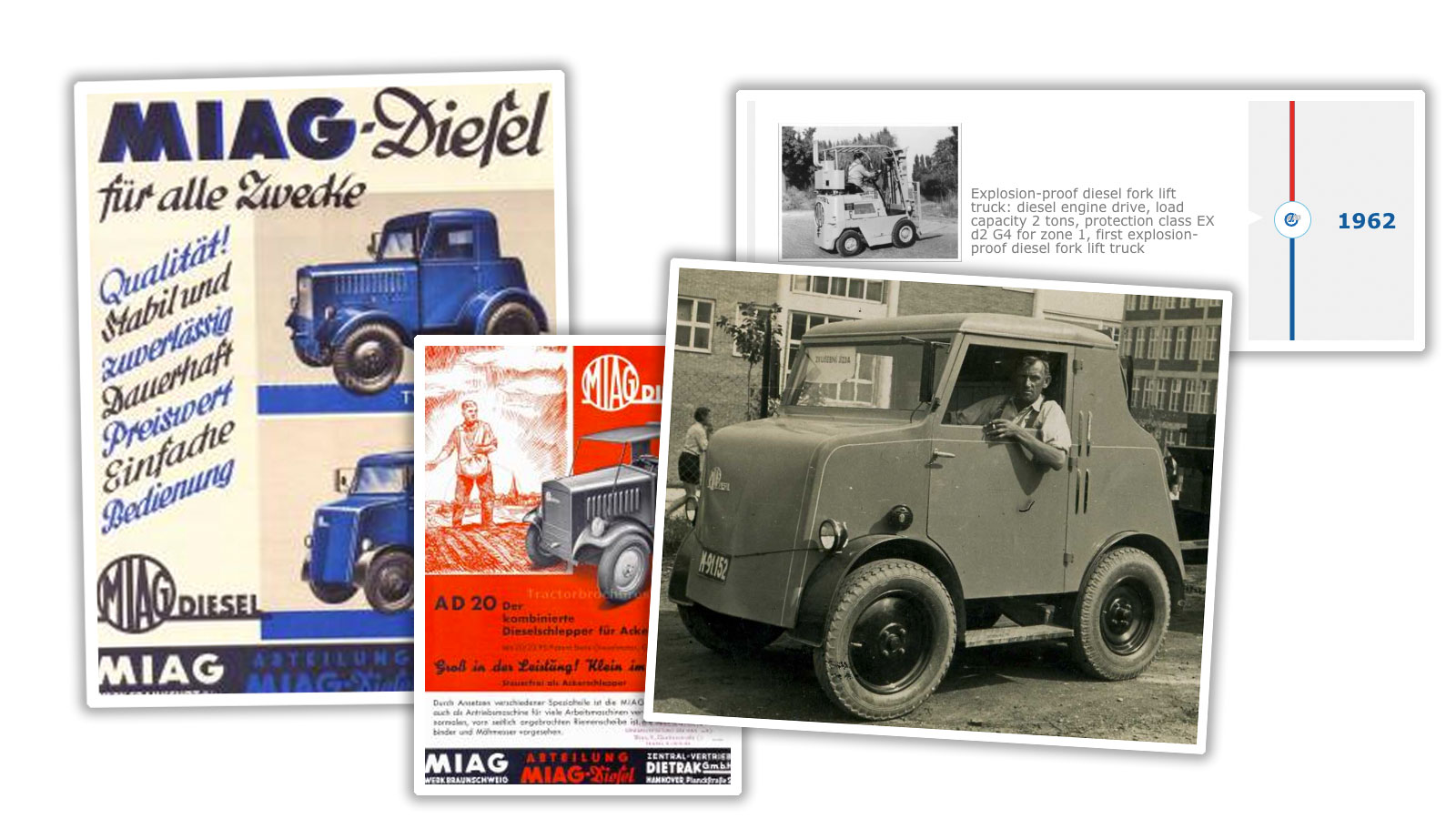 Were forklifts exploding all over the place in the 1950s?

Forklift fireworks aside, the vehicle I want to talk about today, this 1953 MIAG Motor-Karren, seen on an auction site for sale. It’s interesting to me for a lot of reasons, but mostly because it’s powered by a Beetle engine, a 25-horsepower 1131cc air-cooled flat-four, but it’s how it’s powered by it that I find incredible.

You see, with only one exception I can think of – a Kristi KT-series snow vehicle –the Motor-Karren is the only vehicle that used the air-cooled VW engine in a transverse layout. And, it’s even more of a “pure” transverse setup than the Kristi snow vehicle. 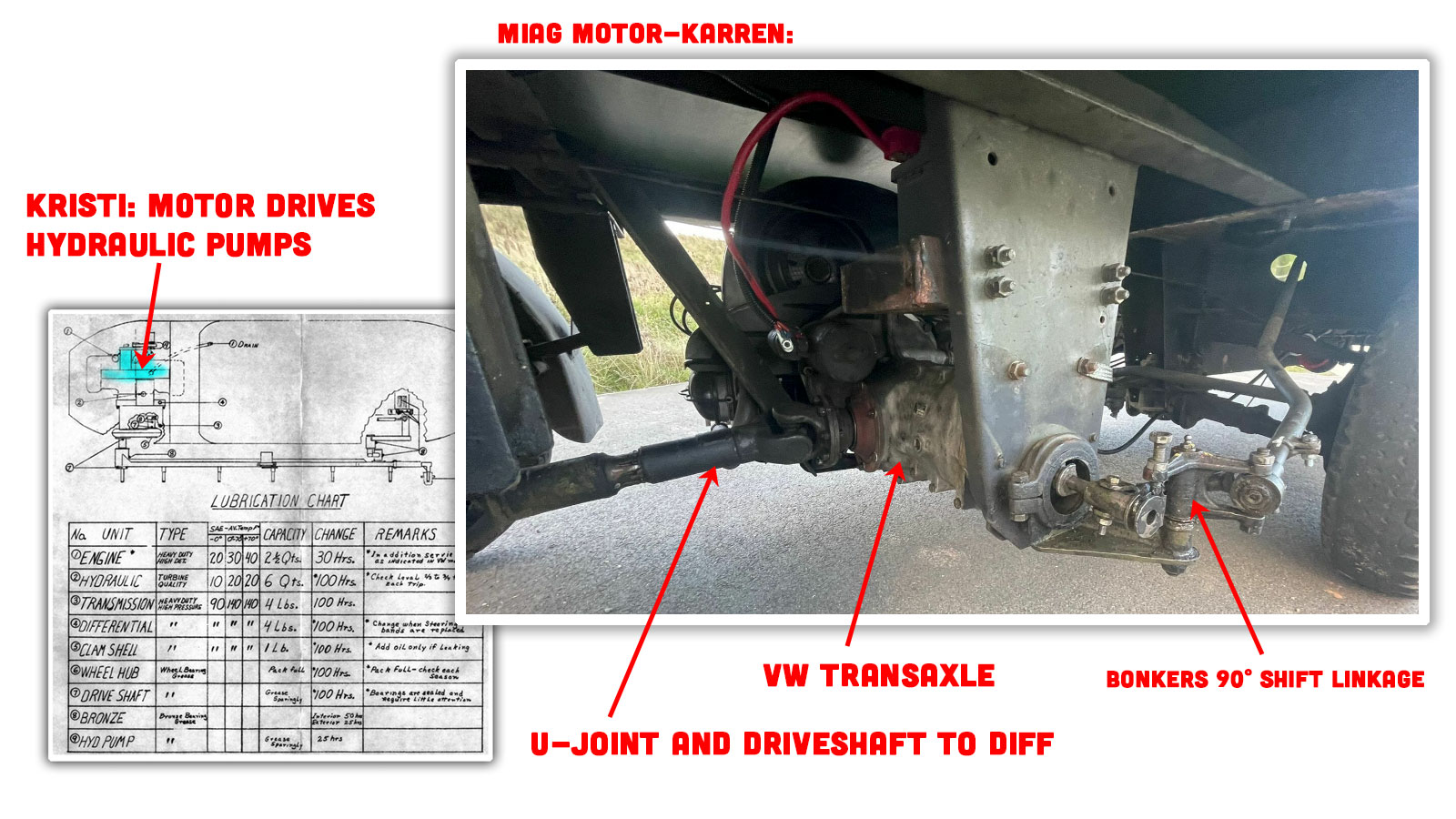 You see, the Kristi’s transverse VW engine was powering hydraulic pumps that did all the work to move the treads and everything, so it wasn’t exactly a direct drive kind of situation. On the MIAG, though, the engine is connected to a stock VW transaxle, but one that’s modified in some really, really strange ways.

First, there’s that Rube Goldberg-looking 90° shift linkage, and then on what would normally be a Beetle’s left-side swing-arm driveshaft to the wheel, here that output goes to a differential on the rear axle via a driveshaft. I’m can’t really tell here if there’s any power take-off from the output on the other side, but it doesn’t look like it; it would be easy to make this a 4WD vehicle with an output to a front axle, though, if desired, I’d think. 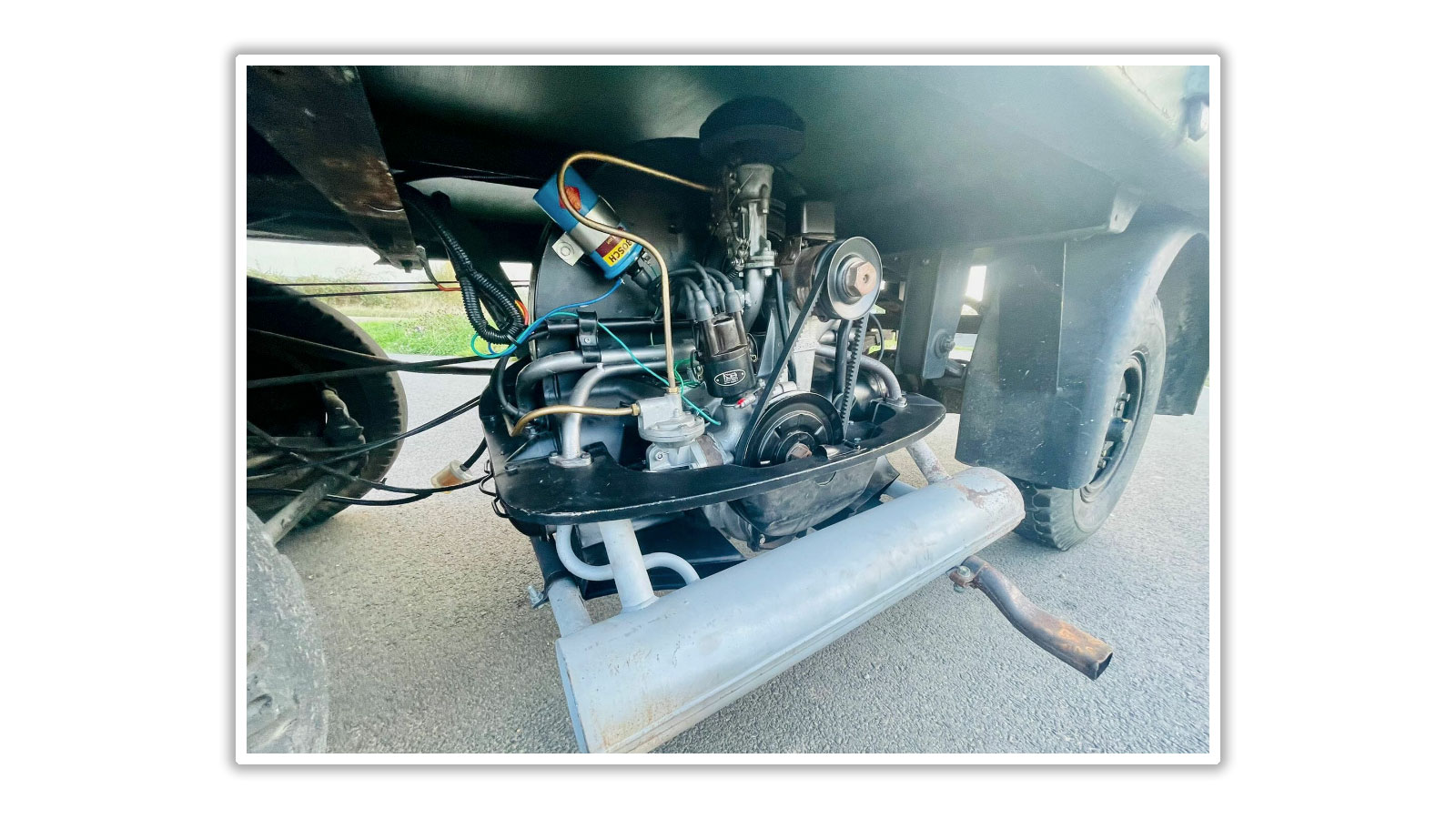 I just can’t get over how strange that engine looks just hanging out under the bed of the truck, between the wheels, sideways. This has to be the only transverse-mid-engine-rear-drive air-cooled VW-powered anything, ever.

So what was this thing for, exactly? 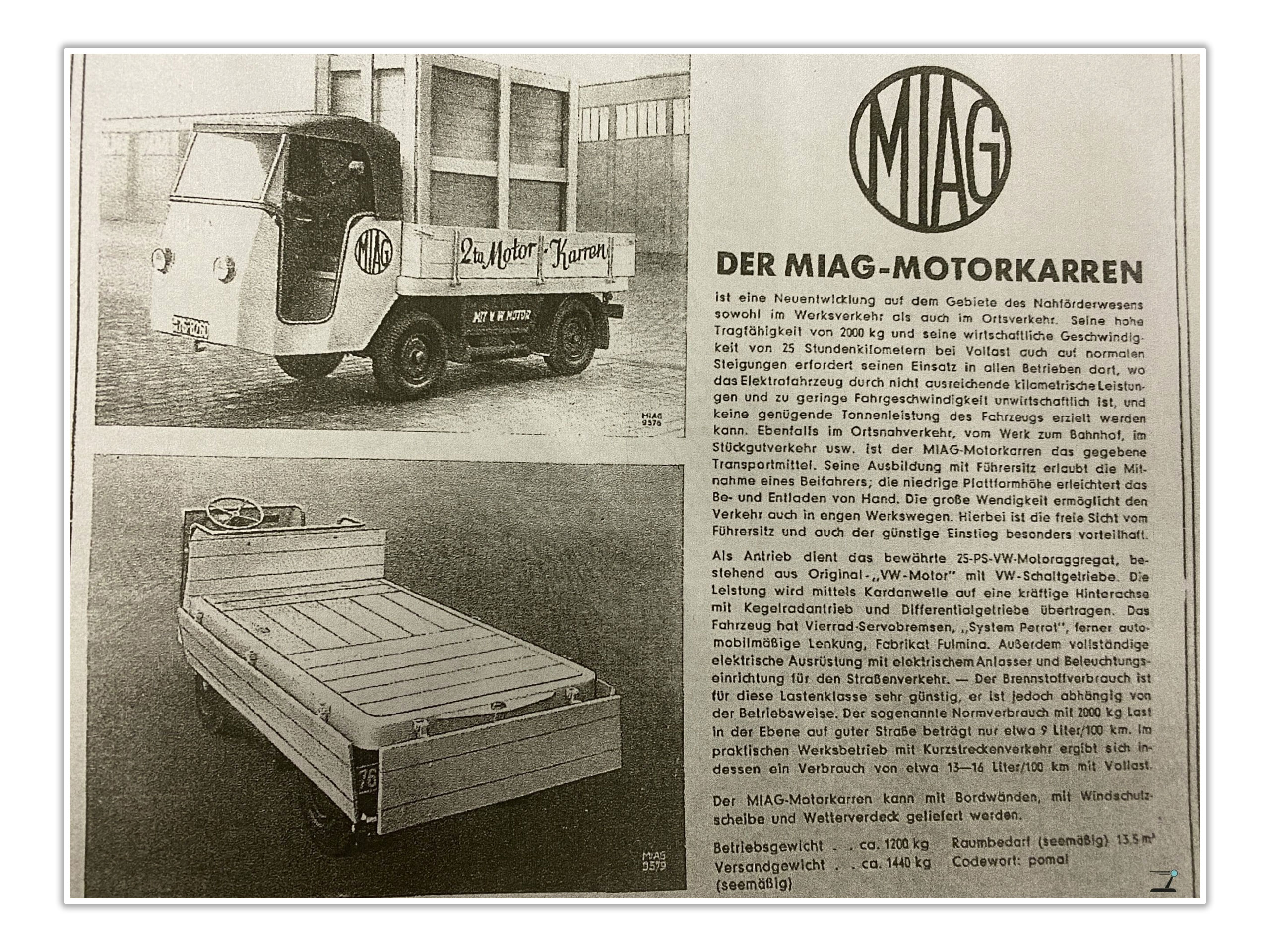 Well, this brochure, helpfully translated by auction site Get Your Classic, where these pictures also came from, gives some insight:

It is a new development in the field of local transport, both in factory and local traffic. Its high load capacity of 2000 kg and its economical speed of 25 kilometres per hour at full load, even on normal gradients, requires its use in all companies where the electric vehicle is uneconomical due to insufficient kilometric performance and too low driving speed, and where no sufficient tonnage performance of the vehicle can be achieved.

The MIAG motor trolley is also the ideal means of transport for local transport, from the factory to the railway station, for general cargo transport, etc. Its training with a driver’s seat allows it to be used in all companies where the electric vehicle is uneconomical due to insufficient kilometric performance and low driving speed. Its design with a driver’s seat allows a co-driver to be carried along; the low platform height facilitates loading and unloading by hand. The great manoeuvrability allows transport even in narrow factory roads. The clear view from the driver’s seat and the favourable access are particularly advantageous.

The drive is the proven 25 hp VW engine unit, consisting of an original “VW engine” with VW manual gearbox. The power is transmitted by means of a cardan shaft to a powerful rear axle with bevel gear and differential gear. The vehicle has four-wheel servo brakes, furthermore automotive steering, make Fulmina. It also has full electrical equipment with electric starter and road lighting. -The fuel consumption is very favourable for this load class, but it depends on the mode of operation. The so-called standard consumption with 2000 kg load on level ground on good roads is only about 9 litres/100 km. In practical factory operation with short-distance traffic, however, the consumption is about 13-16 litres/100 km at full load.

So, as you likely guessed, local transport, the sort of thing you might use on factory grounds or in a factory or some other similar kind of facility, like a warehouse or maybe a zoo with a lot of lazy hippos. This little brute could carry over 4,000 pounds at about 15 mph, and get about 26 mpg doing it. That’s pretty damn good from a 25 hp truck in the early 1950s!

Also interesting is how it’s being compared to similar electric work vehicles, where it’s compared favorably on the metrics of speed and hauling, but, interestingly, not range. 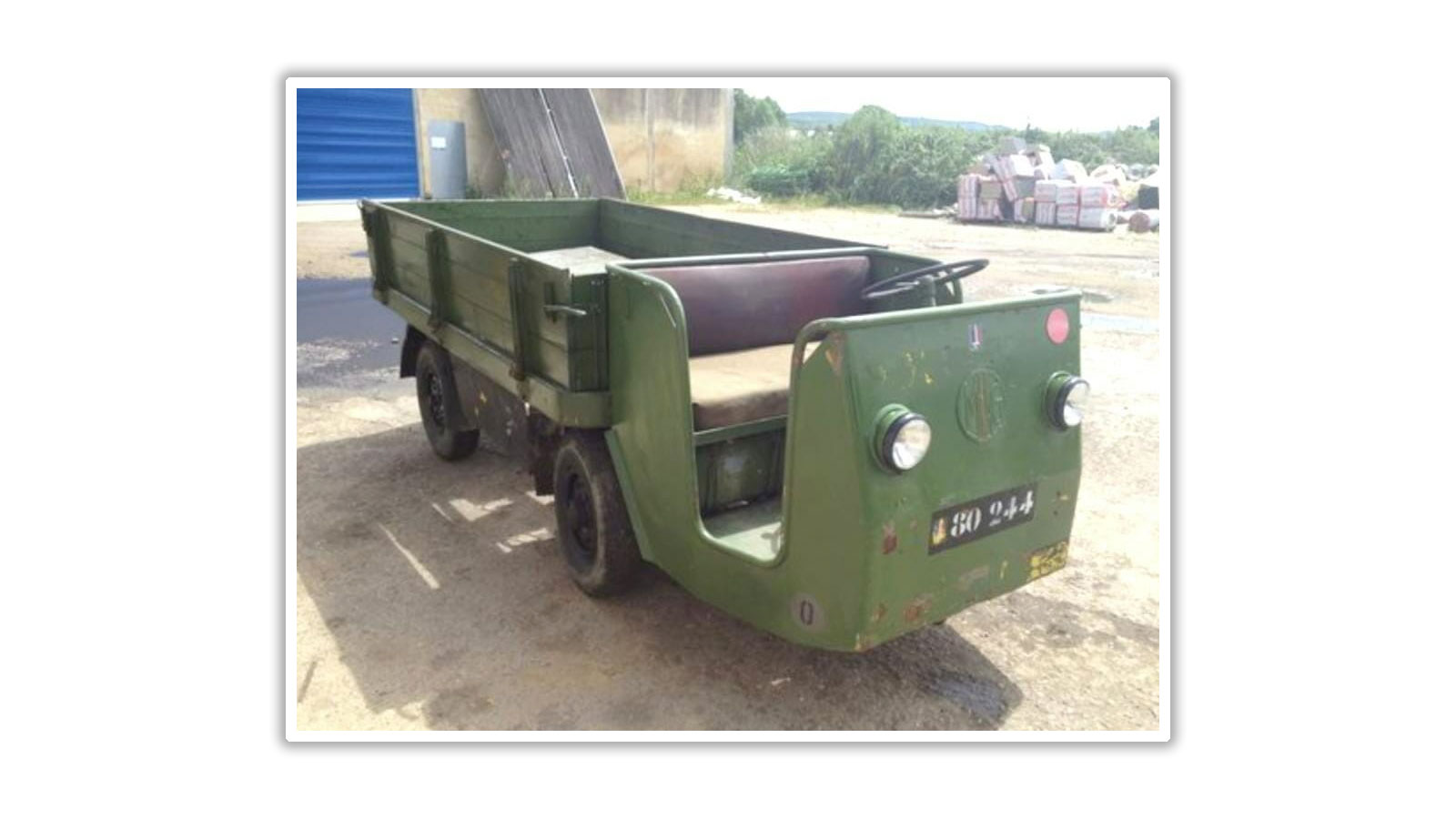 These remind me a bit of the dirt-simple Plattenwagen transport vehicles the VW factory built for its own internal use, only re-configured to provide a more conventional truck-style layout.

This is an incredibly rare and unusual air-cooled VW-powered machine, and shows how versatile that humble, noisy little air-sucker of an engine was, and how vast and varied the spectrum of what a truck is can be. It’s also interesting to see how these sorts of commercial applications of the VW formula continued after VW’s own Type 2 Transporter vans and trucks were introduced in 1950, because even a flexible platform like that couldn’t really fill extremely specialized niches like this one.

Someone should buy this amazing little mechanical work-frog of a truck, even if only to watch that hilarious shift linkage in action.

I'm a co-founder of the Autopian, the site you're on RIGHT NOW! I'm here to talk to you about taillights until you cry and beg me to stop, which I absolutely will not. Sorry. Hug? Also, David's friend.
Read All My Posts »
PrevPreviousHyundai And Kia Are Quite Literally Aiming For The Moon
NextThe New Chevrolet Colorado Promises Tons Of Kit And Turbocharged Power Even On The Base ModelNext