There’s something you probably don’t know about me. Despite my ironic hipster haircut and cliched depreciated BMW 3-Series, I love trucks. The second-best vehicle I’ve ever owned was a 1995 GMC C1500 Sierra. It was the sort of honest, hardworking truck that embodies a father figure stereotype. I’ve towed cars with F-150s, blasted through snow drifts in Tacomas, schlepped furniture in Rams, and hauled car parts in GM trucks. So when Chevrolet announced a new Colorado, you can bet your ass I got excited. 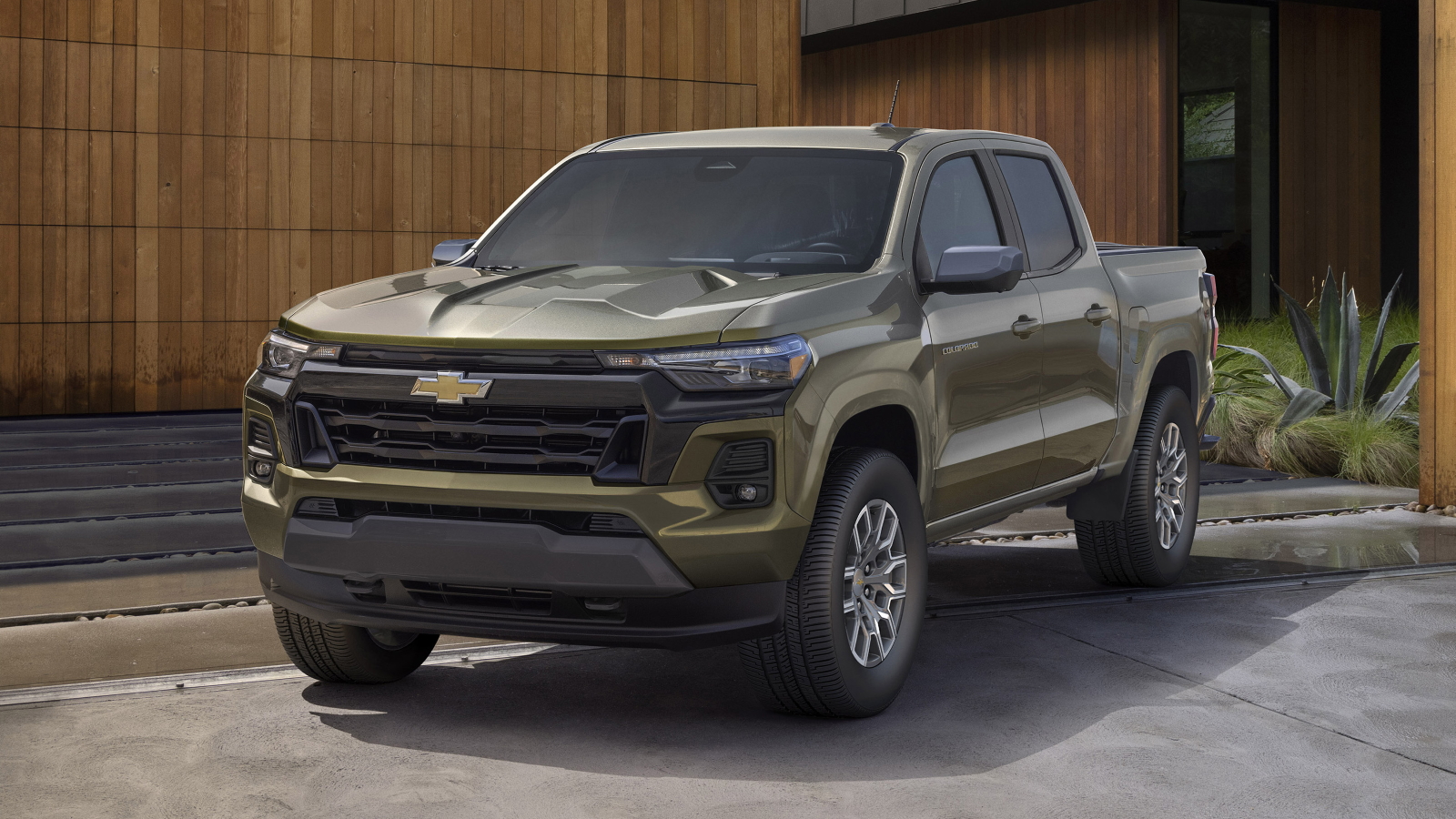 Right off the bat, there’s a bit of a problem. Chevrolet’s styling department has made some odd decisions regarding front fascias lately. While the new Colorado features many different front end treatments to distinguish trim levels, none really seem to hit the mark. The Work Truck and Trail Boss feature a giant hunk of unpainted plastic, the LT and Z71 are fussy, and the ZR2 has a weird painted lower grille. Then again, the new world-market Ford Ranger isn’t a looker either, and it doesn’t have nearly as cool body surfacing as the new Colorado. 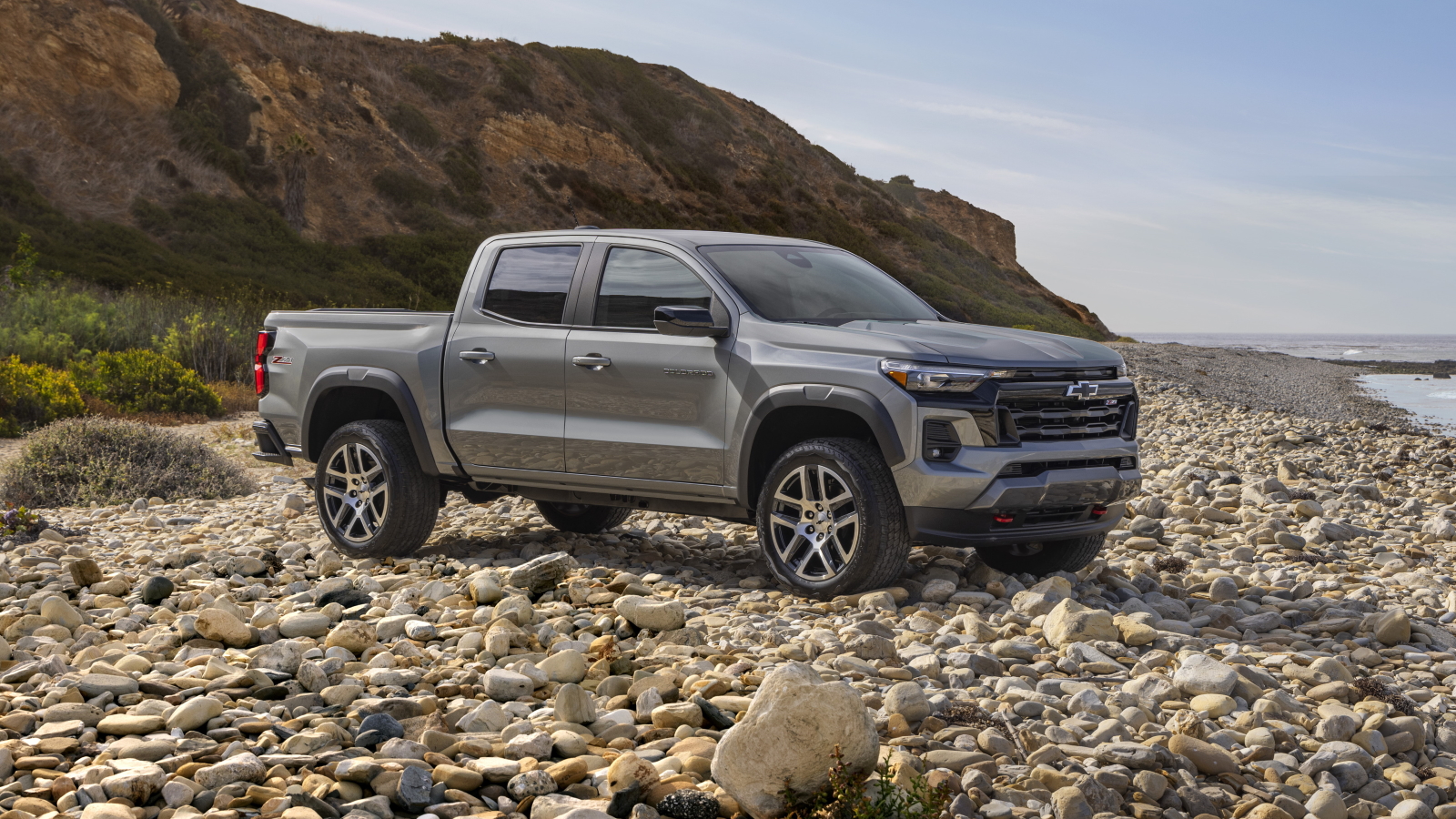 Look at those strong beveled fenders and quarter panels, those planted fender flares, and that neat double-kinked belt line. This is one of the strongest profiles of any midsize pickup trucks, right up there with my design favorite, the new Nissan Frontier. The strong beveling seen on the Colorado’s quarter panels also appears on the tailgate, as does the Chevrolet wordmark stamped in eighty billion-point font. Job well done. 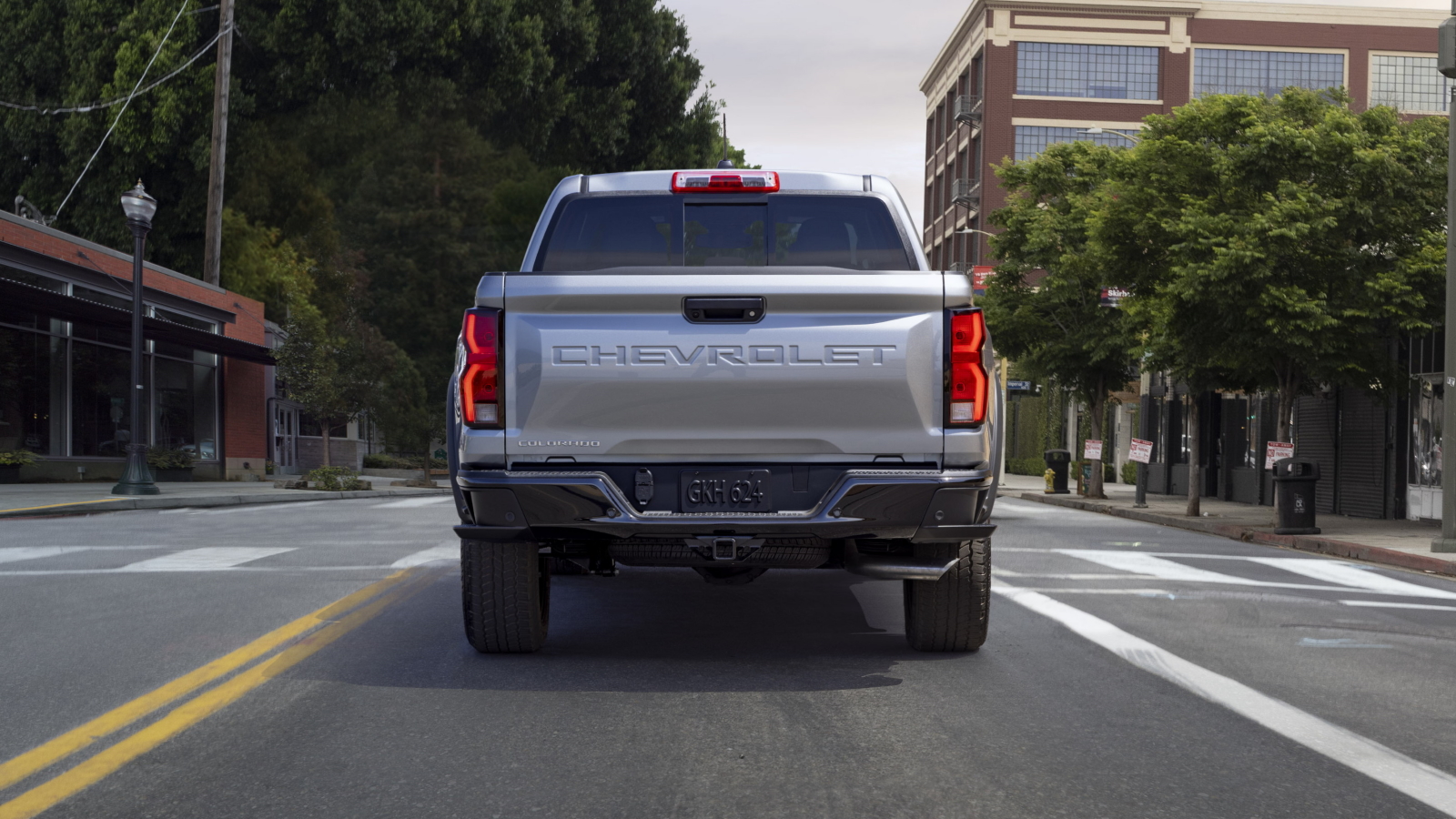 Honestly, front end aside, the new Colorado is a very strong bit of design work, and that’s before I even get into the interior. My god, Chevrolet knocked it out of the park here. Look, midsize trucks have always put utility first and while that’s endearing, creature comforts and modern design can feel quite nice. As such, the Colorado displays remarkably little carryover from GM models of yesteryear. Sure, the shifter has a touch of familiarity and the electronic handbrake switch looks extremely GM, but everything else on the console and dashboard looks wonderfully fresh. The circular vents and toggle switches do a lovely job of perking everything up, while the rotating four-wheel-drive selector looks remarkably classy for this segment. Best of all, Colorado buyers won’t have to take a massive walk up the trim range to get a nice interior. That image below this paragraph? It’s the base model Work Truck. Yeah, that’s a base model. 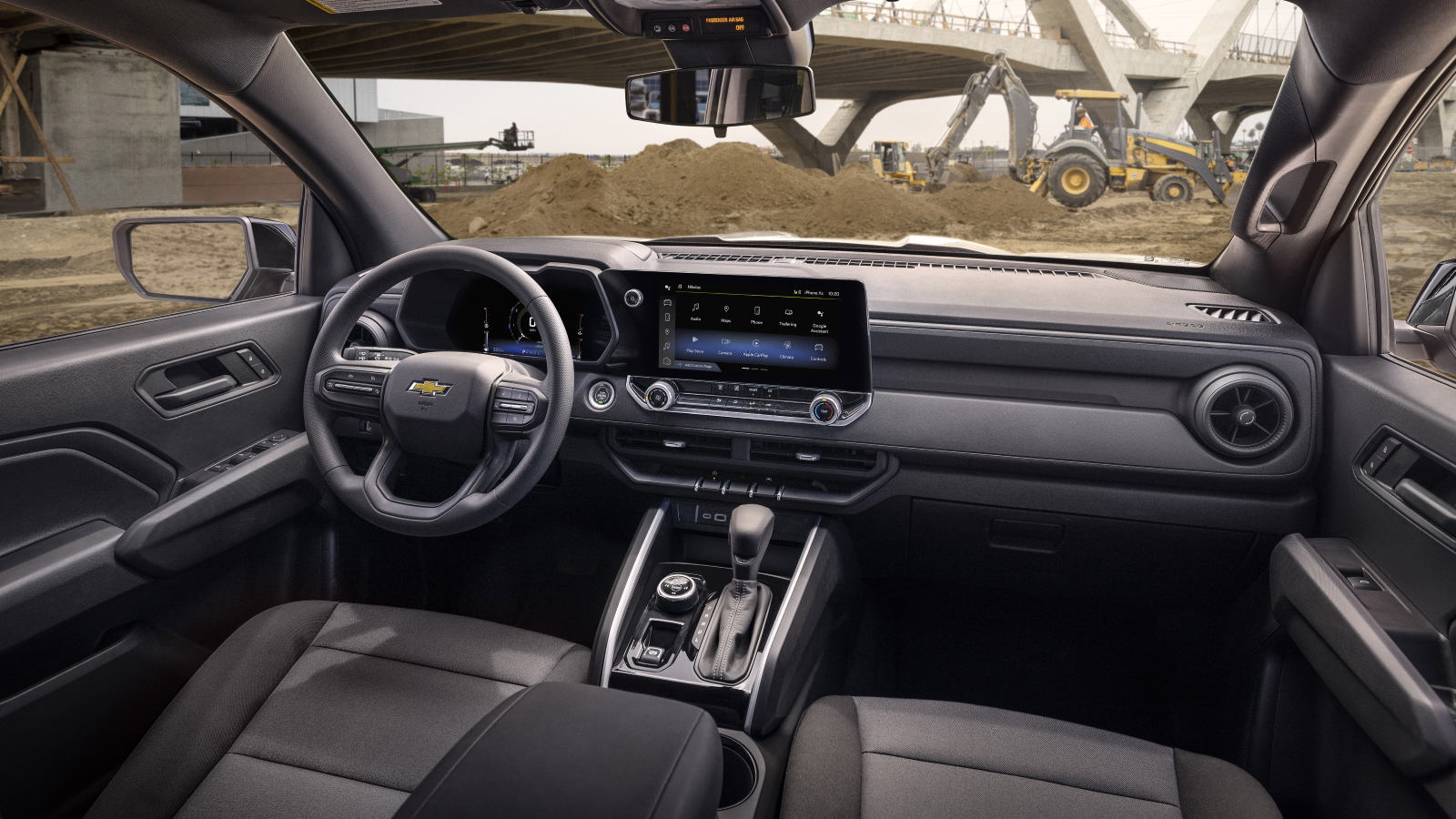 Look at all the shit you get for the money. There’s an 11.3-inch touchscreen infotainment system and an eight-inch digital gauge cluster keeping you informed, entertained, and able to gauge important things. What’s more, the dashboard isn’t festooned with blanked-off switches to remind you of how many toys you’re not getting. Speaking of toys, each base-model Colorado comes with six speakers, automatic emergency braking, lane keep assist, and wireless phone mirroring. Autozone delivery drivers, eat your hearts out. 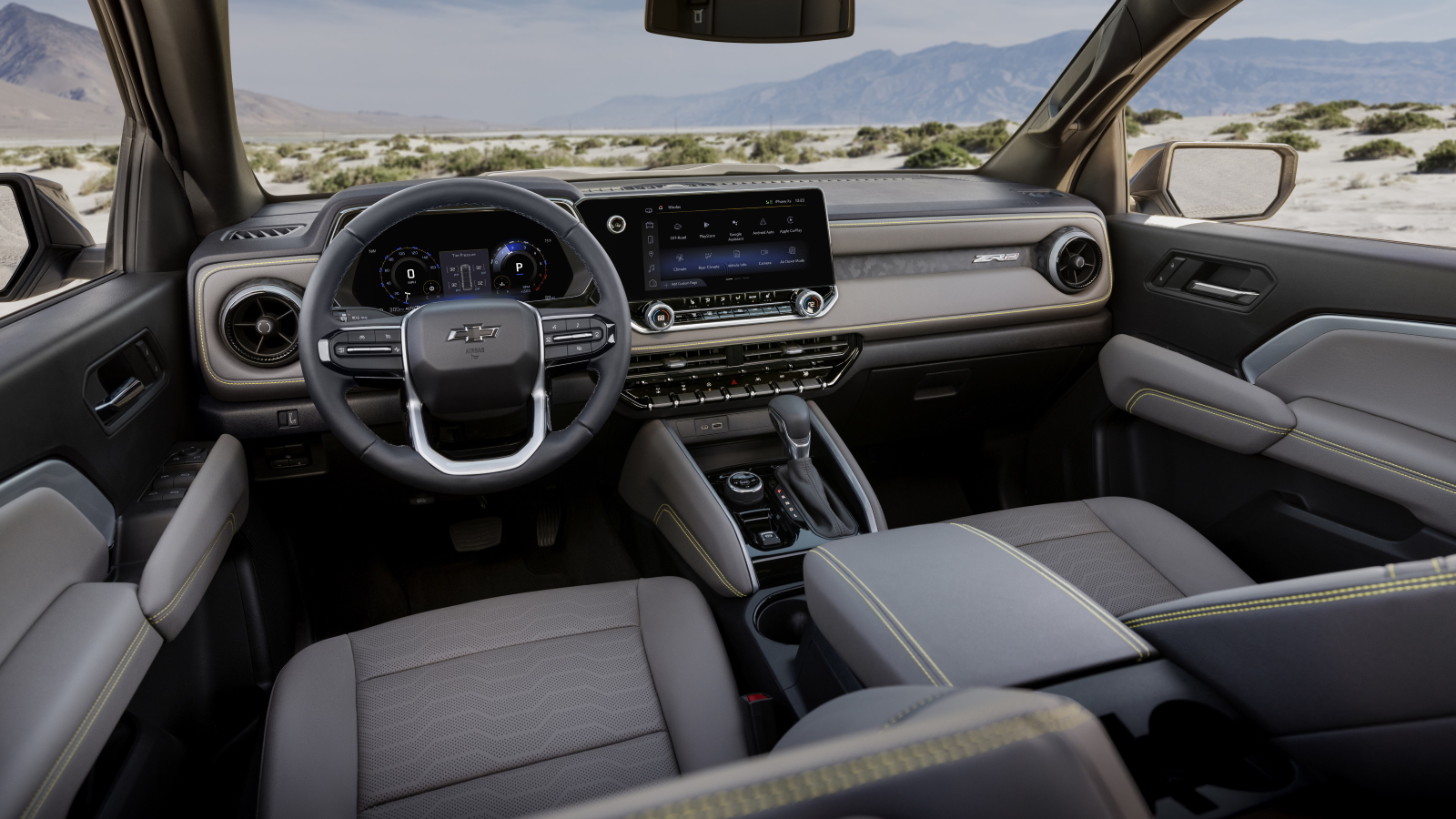 Truthfully, options pile on as you go further up the range. The LT trim gets alloy wheels, color-keyed trim, and a steering wheel wrapped in leatherette. The Z71 gets LED lamps, 18-inch alloy wheels with all-terrain tires, heated mirrors, leatherette and cloth upholstery, and a standard sliding rear window. Lastly, the ZR2 pulls out all the stops with heated seats front, dual-zone climate control, and a storage compartment integrated into the tailgate. That last feature is available as an option on some lesser trim levels, so customers should be able to play around with the options list until they have the truck they want. 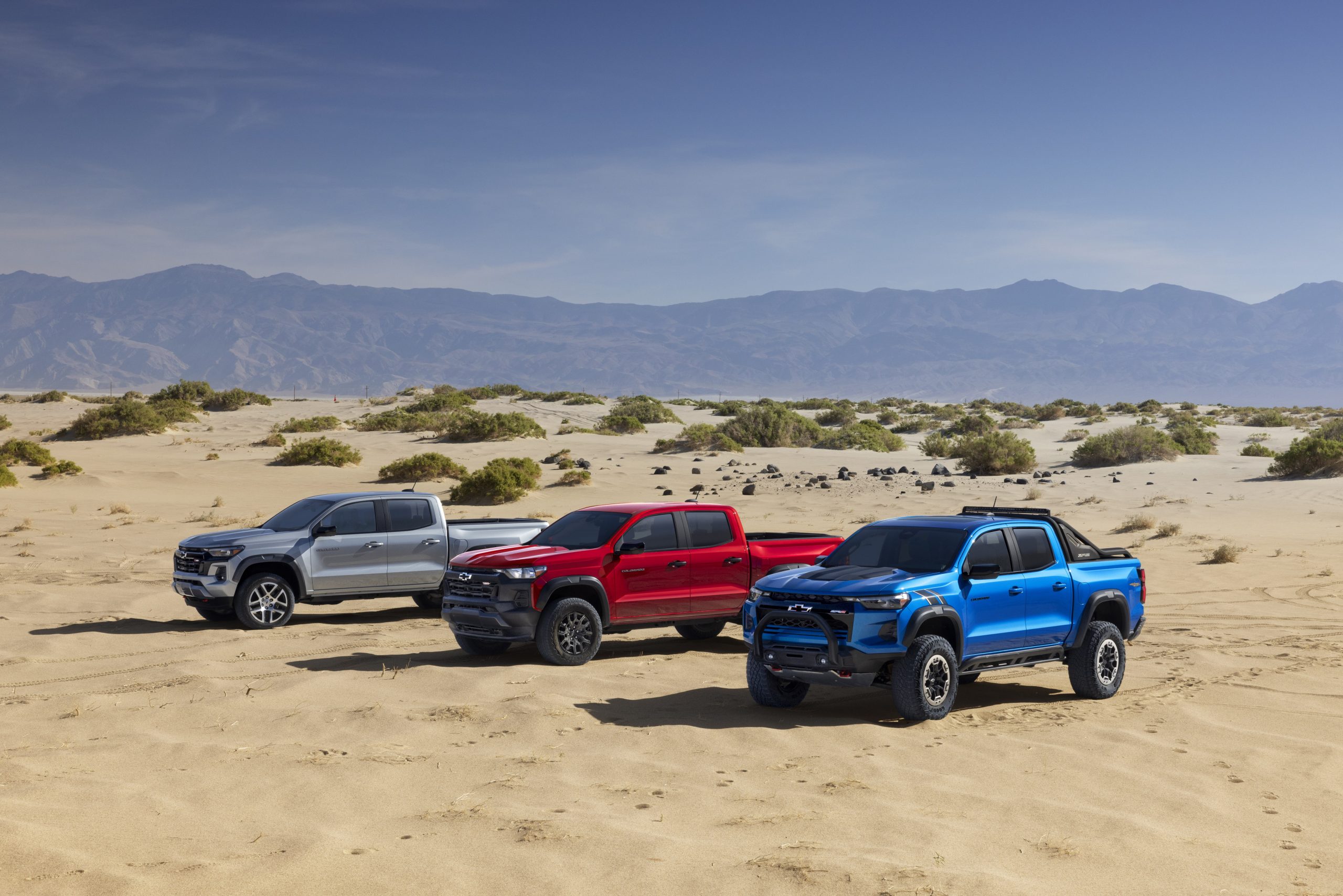 Right, we’ve gulped down the greens of trim and styling, now let’s talk about the Colorado’s meaty new mechanicals, starting with a big one. The new Colorado features a new frame. Not only does this allow for a 3.1-inch wheelbase stretch over the current crew cab/short bed Colorado, it let Chevrolet improve clearances thanks to new packaging and a shorter front overhang. Let’s compare the new Z71 with the old crew cab, short bed Z71. Minimum ground clearance is up from 8.3 inches to 8.9 inches, approach angle is up from 17.3 degrees to 29.1 degrees, departure angle stays steady at 22.3 degrees to the old model’s 22.1 degrees, while breakover angle is down slightly from 19.8 degrees to 19.5 degrees. Not the worst compromise to make considering the 3.1-inch wheelbase stretch. 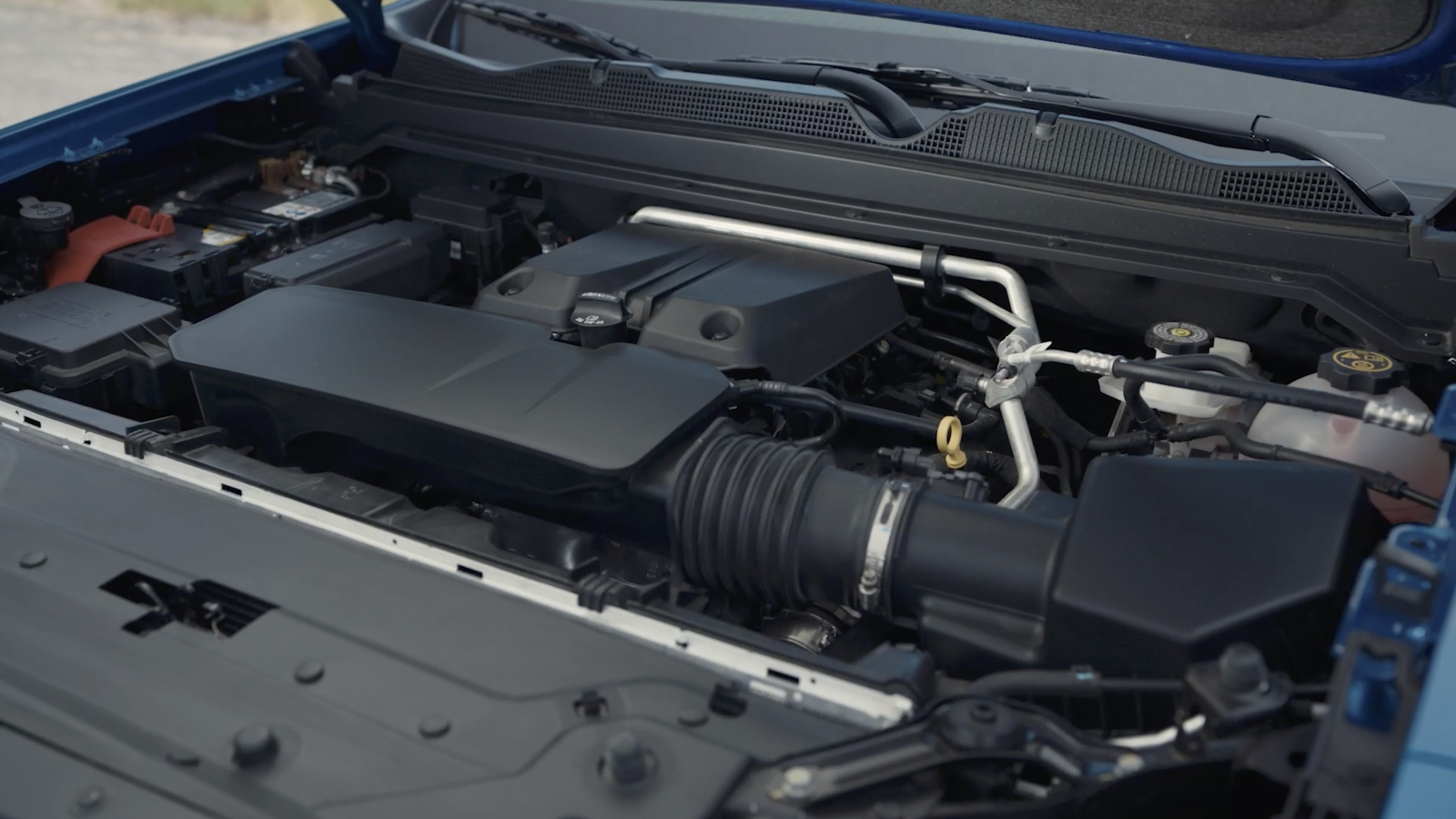 With a new frame comes significantly more influence from GM’s half-ton pickup trucks. The new 6×139.7 mm wheel bolt pattern is a huge boon to anyone interested in fitting aftermarket wheels, although the big news is an entirely new engine lineup. Well, engine lineup may be a bit disingenuous. See, the new Colorado features GM’s 2.7-liter turbocharged four-cylinder engine in three states of tune. Base work trucks and LT models get 237 horsepower and 259 lb-ft of torque, although customers can option the same higher-output 310 horsepower and 390 lb.-ft. variant found in the Trail Boss and Z71. This takes maximum towing capacity up from 3,500 pounds to 7,700 pounds, a strong figure for a midsize truck. Want more torque? No worries, the ZR2 has it in spades. We’re talking about the same 310 horsepower as the mid-grade 2.7T, but a whopping 430 lb.-ft. of torque. Regardless of engine choice, torque goes to the ground through an eight-speed automatic gearbox. 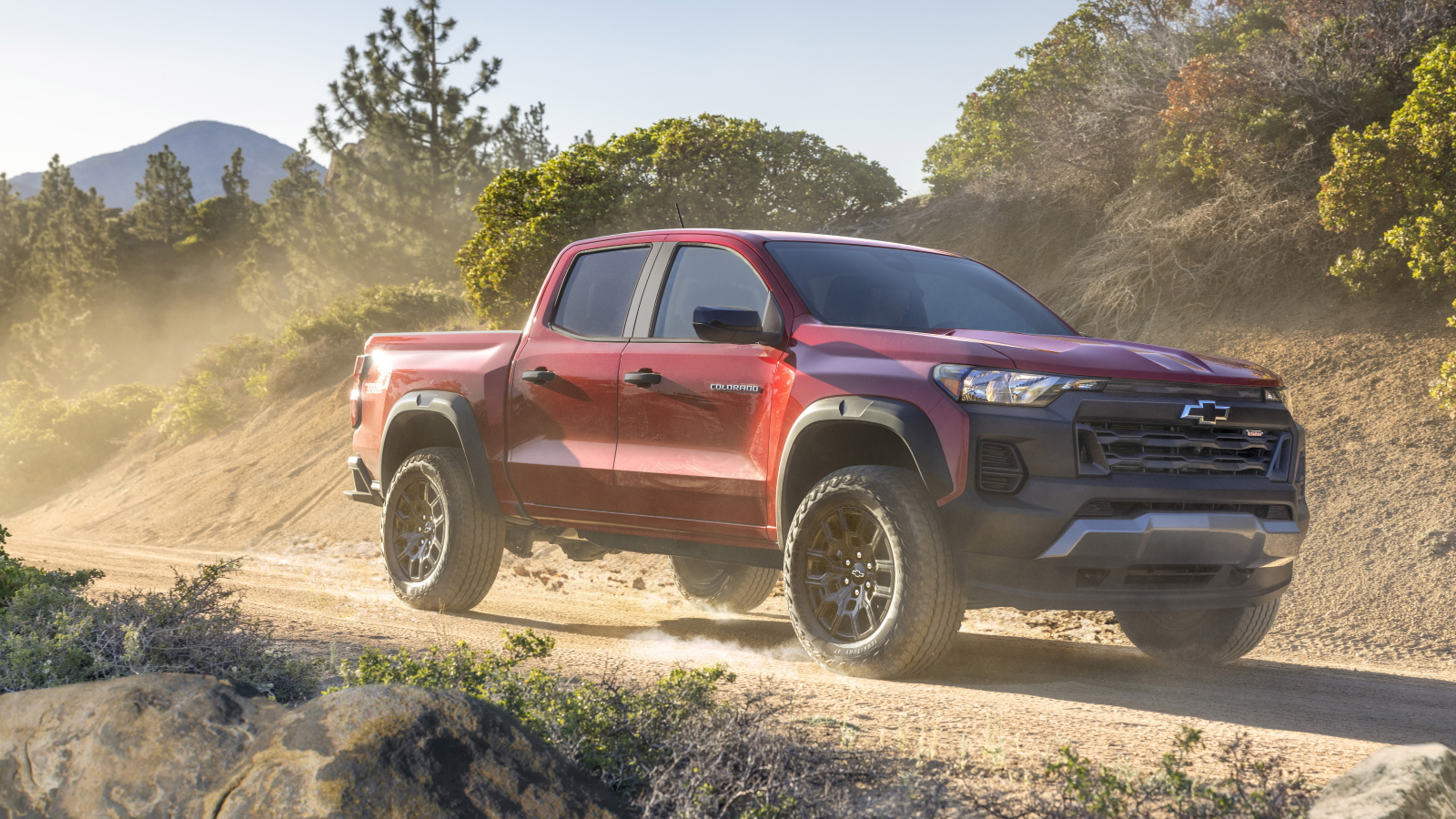 Or should I say, power goes to the axles through an eight-speed automatic gearbox. See, 390 lb.-ft. of torque is all well and good, but it won’t get you far through the loose stuff if only one tire is spinning. Welcome to the Colorado Trail Boss, my early favorite of the Colorado range. It takes the familiar formula of adding a limited-slip rear differential, raised ride height, wider track, and all-terrain tires, and applies it to the base trim of the Colorado mid-sized truck. In this case, minimum ground clearance is up to 9.5 inches, track width is up by three inches, and the standard tires are 32-inch all terrain meats wrapped around 18-inch alloy wheels. Challenging black plastic front fascia aside, this feels like it may be the Colorado to have. 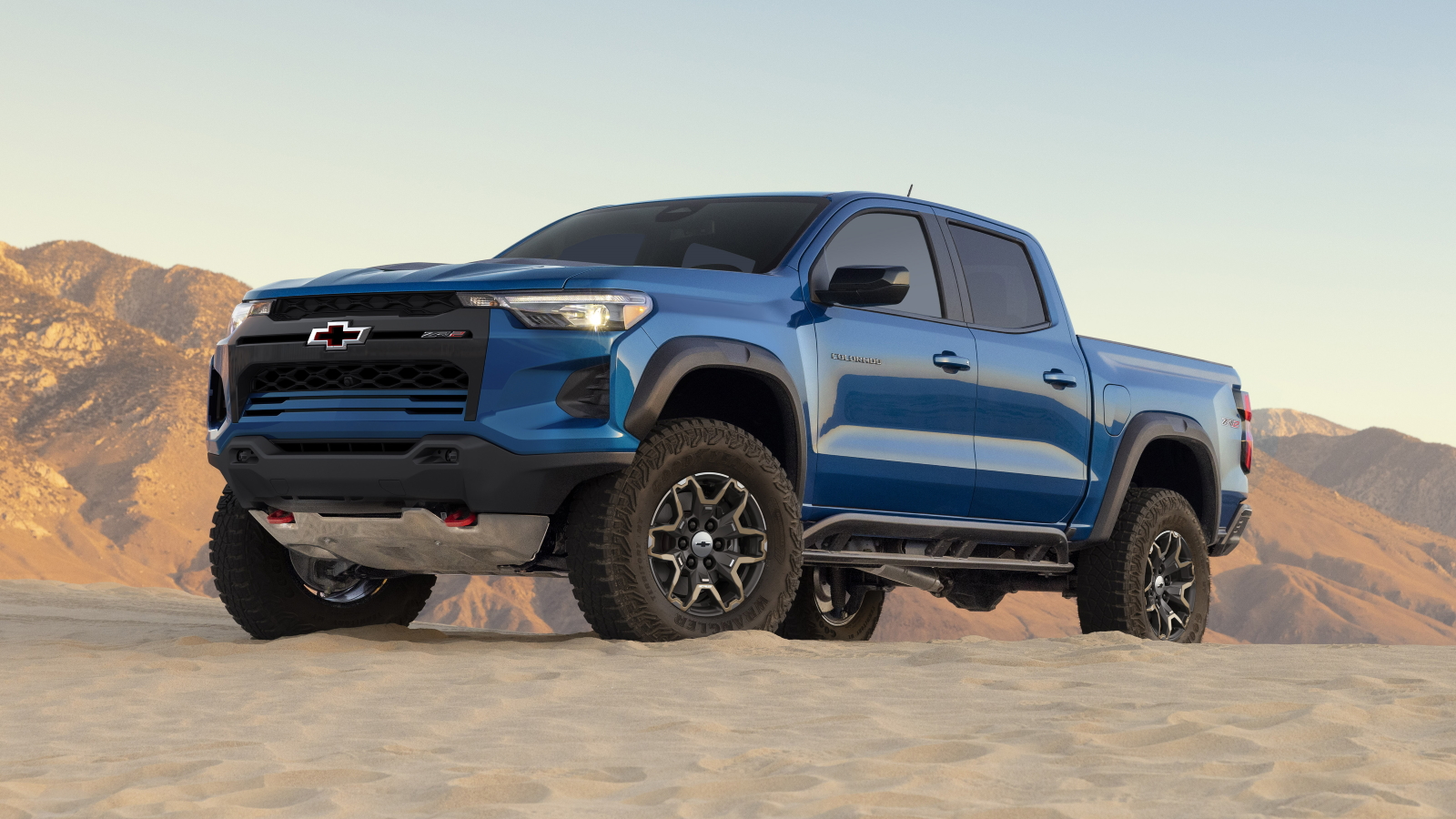 However, if you have money on your dresser, and maybe drive a Kompressor on the streets, the Colorado ZR2 seems like just the thing for getting out of town on the weekends. Way, way out of town. From a visual standpoint, the ZR2 features modified bumpers with tire cutouts up front, 33-inch mud terrain tires on 17-inch alloy wheels, rocker panel protection, and a beefy 10.7 inches of minimum ground clearance. However, all the big stuff is going on underneath this truck. Like the old ZR2, the new one gets spool valve dampers from Multimatic, locking front and rear differentials, and beefy skid plates. Throw in cast iron control arms and a Baja-optimized drive mode, and it all adds up to one nifty little desert runner. There’s also the ZR2 Desert Boss package which adds an underbody camera and some appearance stuff like sail panels and a special off-road bumper, but most of the goodness is baked into the standard ZR2. 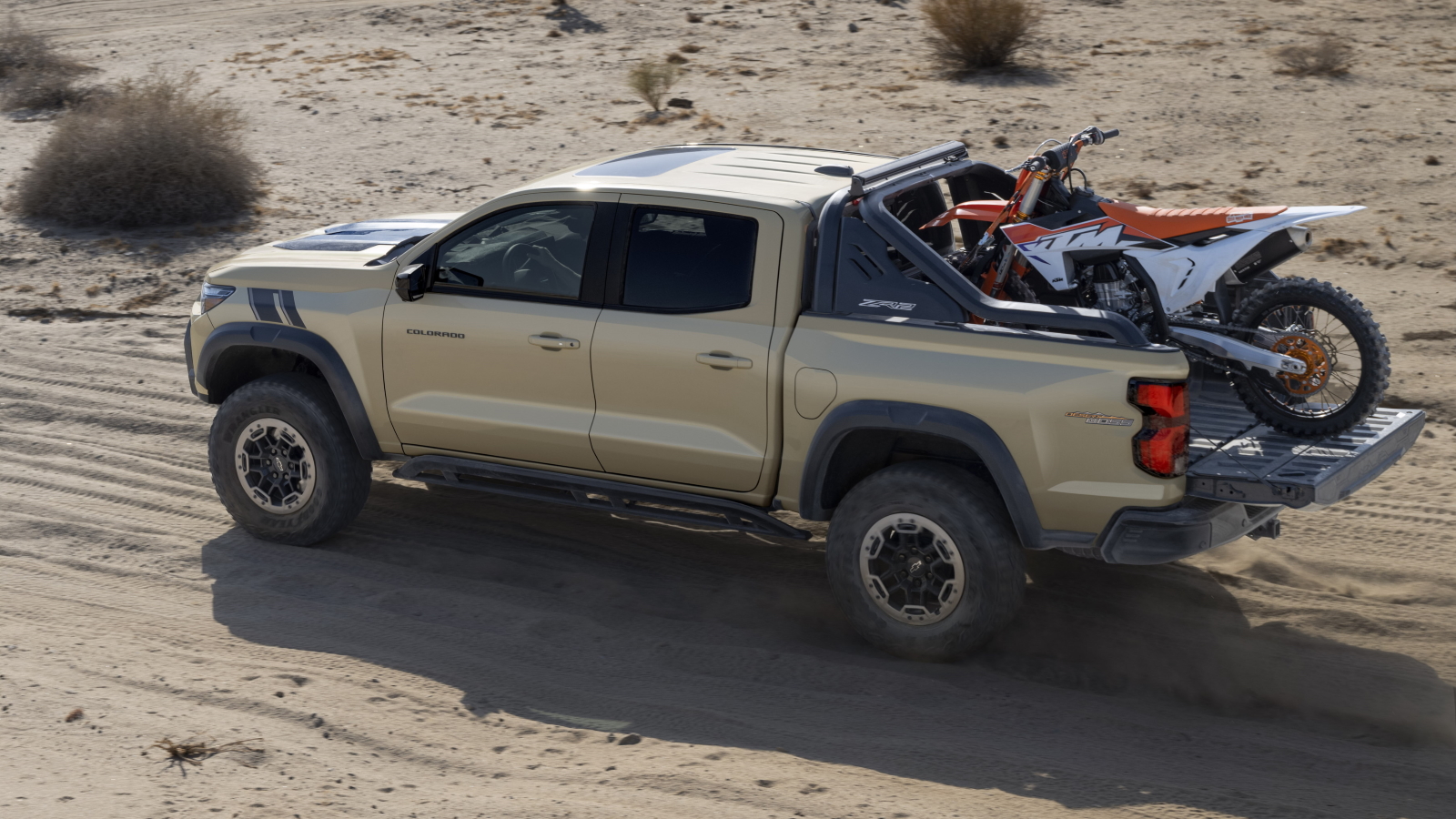 It looks like Chevrolet has really knocked it out of the park with the new Colorado. From a base model with loads of kit to a decked-out right-sized desert attack truck, there really seems to be something for everyone here. Pricing hasn’t been announced yet, although it’s anyone’s guess as to where it will land. Cutting out the base extended cab model and the old 2.5-liter naturally-aspirated four-cylinder engine could theoretically push pricing upward, but the effects of the new body, frame, engine, and equipment on the bottom line are yet to be seen. Expect the new Colorado to roll into showrooms in early 2023. Hopefully it’ll be really worth the wait.

All photos courtesy of Chevrolet

Thomas is a Nu Rave-blaring, heel-toe downshifting, maple syrup-swilling, chassis-geeking, junkyard parts-hauling, floppy-haired scenester who's been writing about cars since college. His current ride is a 2006 BMW 325i with the six-speed manual gearbox. Instagram: @thomas.hundal Twitter: @thomashundal
Read All My Posts »
PrevPreviousThis Incredibly Obscure Air-Cooled VW-Powered Truck Does Something Only One Other Air-Cooled VW Ever Did
NextThe Lane Museum Finally Got A Renault Twingo So Let’s Take A LookNext