Cars have faces, much like how you or I or an angler fish does. We all know this, and anyone who disagrees is just trying to make some pedantic, stupid point and I won’t judge you if you bite them, hard, right on the forearm. There are trends that can be inferred by the way car faces look, and a great way to get a general sense of what modern car visages are currently like is to get a bunch of pictures of them, average them all together, and see what you get. And that’s exactly what I did.

While at this year’s Detroit Auto Show just recently, I had our own Mercedes Streeter shoot pictures of the front ends of as many cars and SUVs/Trucks as possible, so I could undertake this experiment. To that end, I got 43 car front end pictures to average together, using the magic of math, and I think the results are pretty fascinating.

Want to see? Of course you do. So here we go: 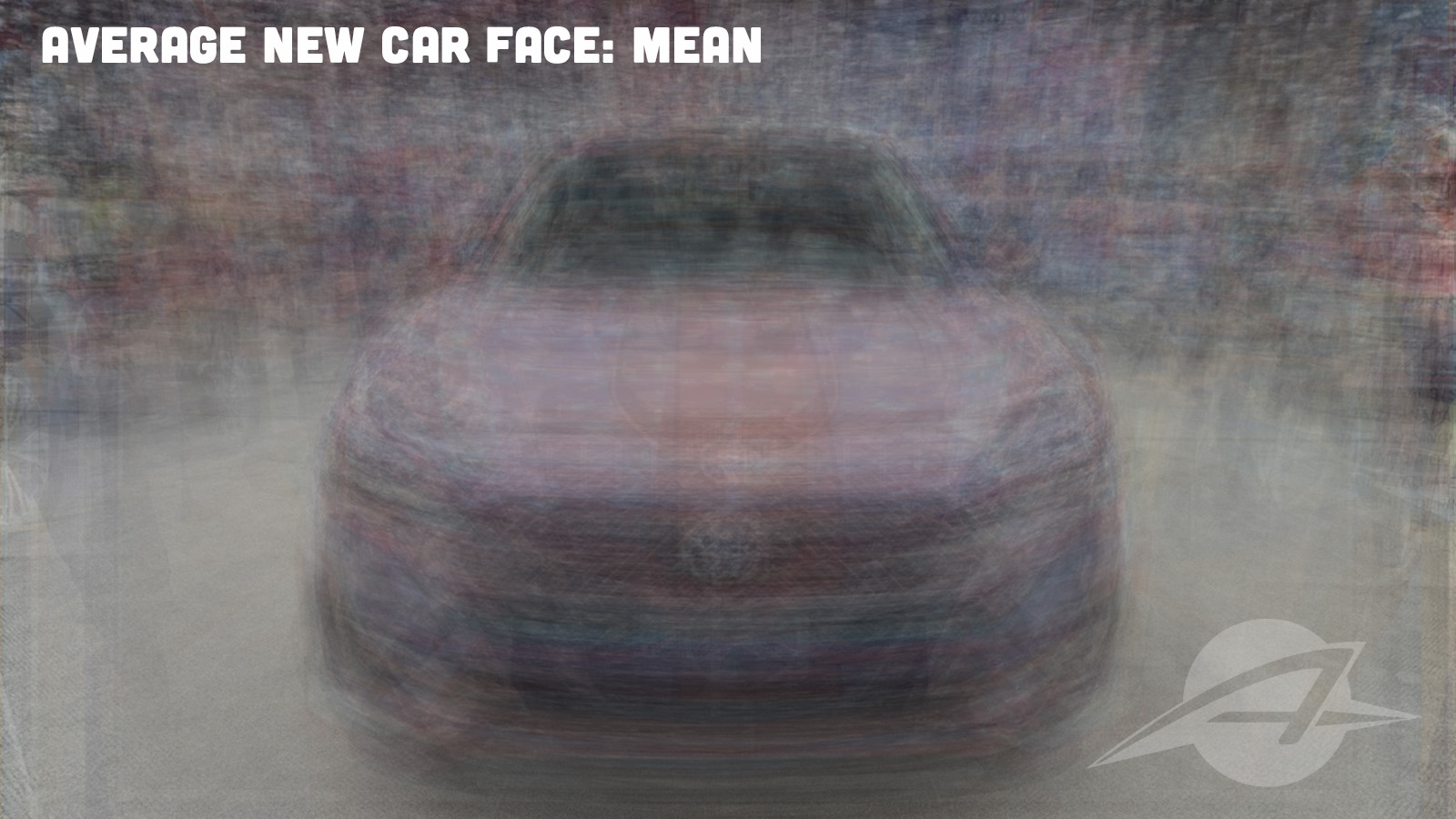 I did these averages two ways, the mean and the median. The mean face (not to be confused with a mean face, like the kind you can buy for your Jeep if your mother didn’t love you) is what we think of when we think of an average, generally: take everything together, divide it by how many everythings you put together, and the result is the mean. In the case of images, we’re doing that with the pixel color values of the image, and the result is what you see above.

The other method used was the median, which basically looks for what values end up in the middle of the set of data, and this is the result that method of averaging gave me: 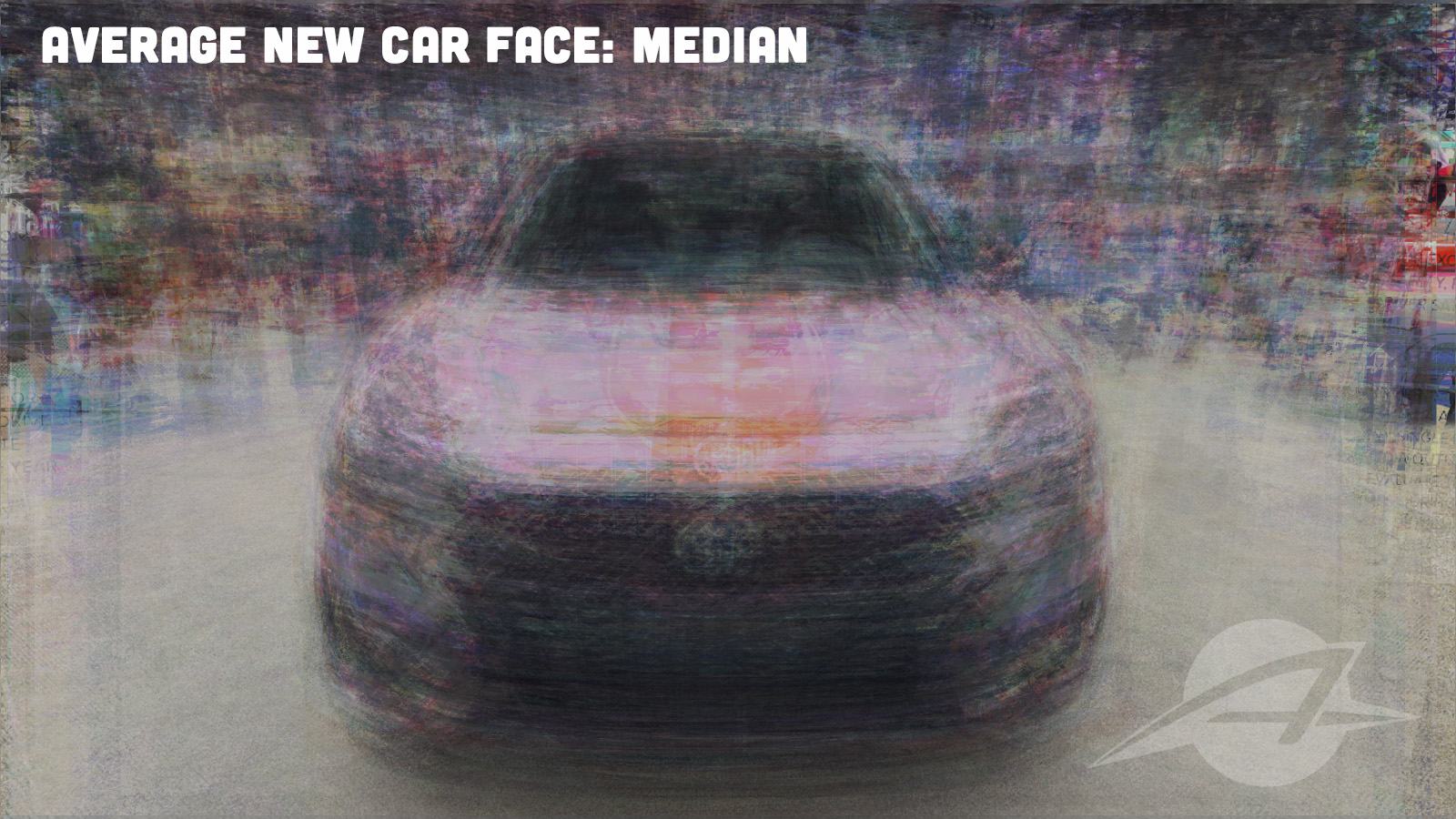 Overall, pretty similar results, really. It seems that the average car face for model years 2022 to 2023 is fairly wide and blunt up front, with a high hoodline and a wide grille. There’s a pretty even split between grilles that are, well, pretty evenly split, with some being bisected horizontally by the bumper bar area, and some forming a tall, unbroken area.

Grille textures are quite prominent as well, averaging out to a sort of honeycomb-looking pattern. Central-grille badges are common enough to show up fairly prominently even after all the averaging, too.

Front lighting units are pushed out quite far to the outer corners, and seem to be creeping higher up into the fenders.

The average color is interesting, settling into a sort of dusty pink, with faint yet exiting hints of stripe kits and contrasting-color hood bulges.

I’ve actually been doing this experiment off and on for a few years, so we can see how things have changed over the years: 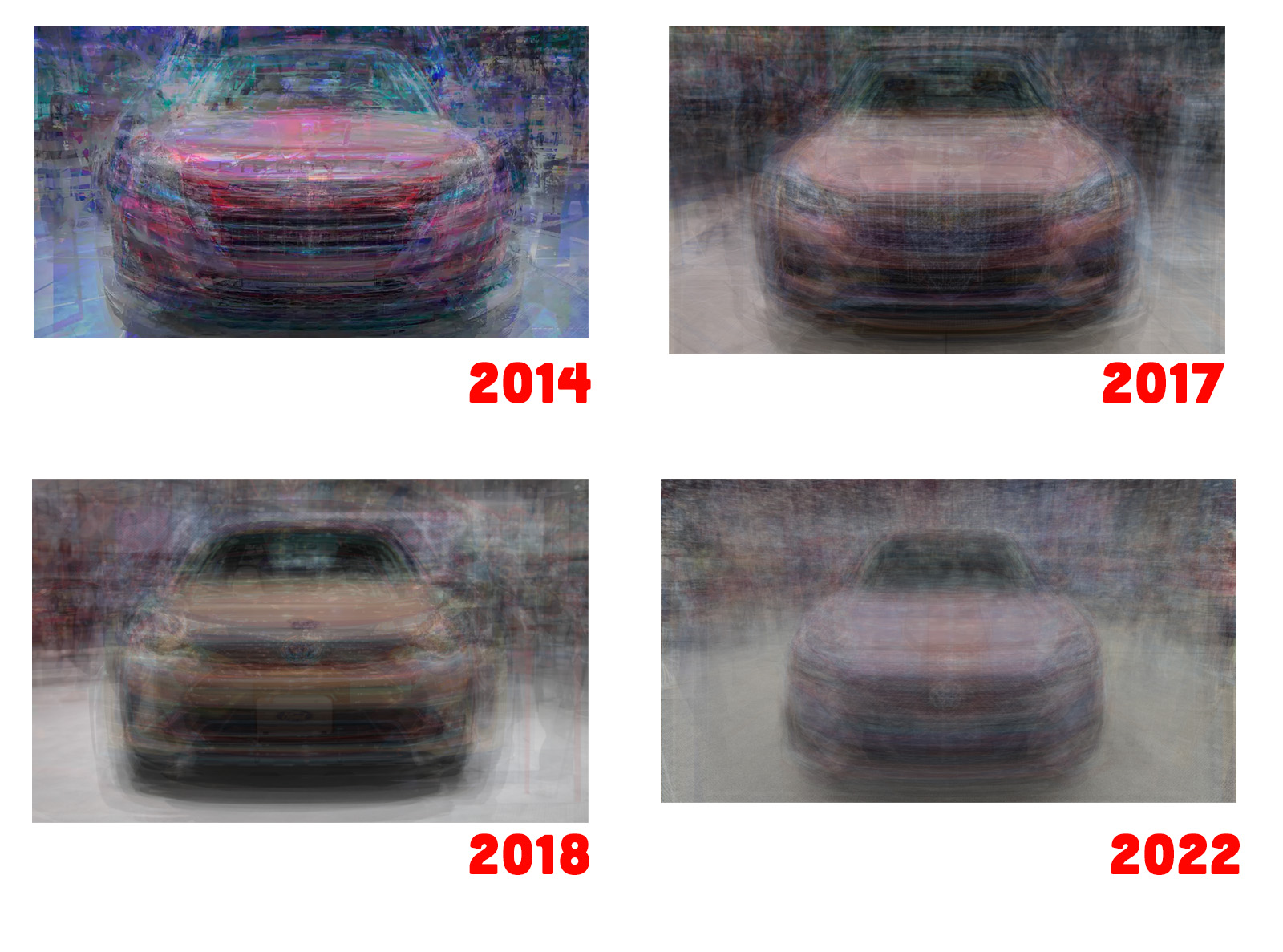 There’s a lot of interesting things going on here; first, it seems the average of the colors always tends to end up a warm pinkish-peachy-ruddy-something. It also looks like grilles have become less prominent lately, something I attribute to more EVs being in the mix, as those cars tend to de-emphasize their smaller and less-prominent grille areas.

I also think car face homogeneity was peaking around 2017, which is why that year seems to have a more coherent face; more cars simply had similar grille and headlight shapes, where now I think we’re seeing more deviations than before, with more risks being taken and some less conventional design decisions occurring.

I’ll have a follow-up post with SUV and truck faces coming soon, and I expect to see some similar trends; while there are definitely some expected traits – huge grilles, for example – there are a number of prominent, especially EV, vehicles that buck this trend, so the results should be interesting. 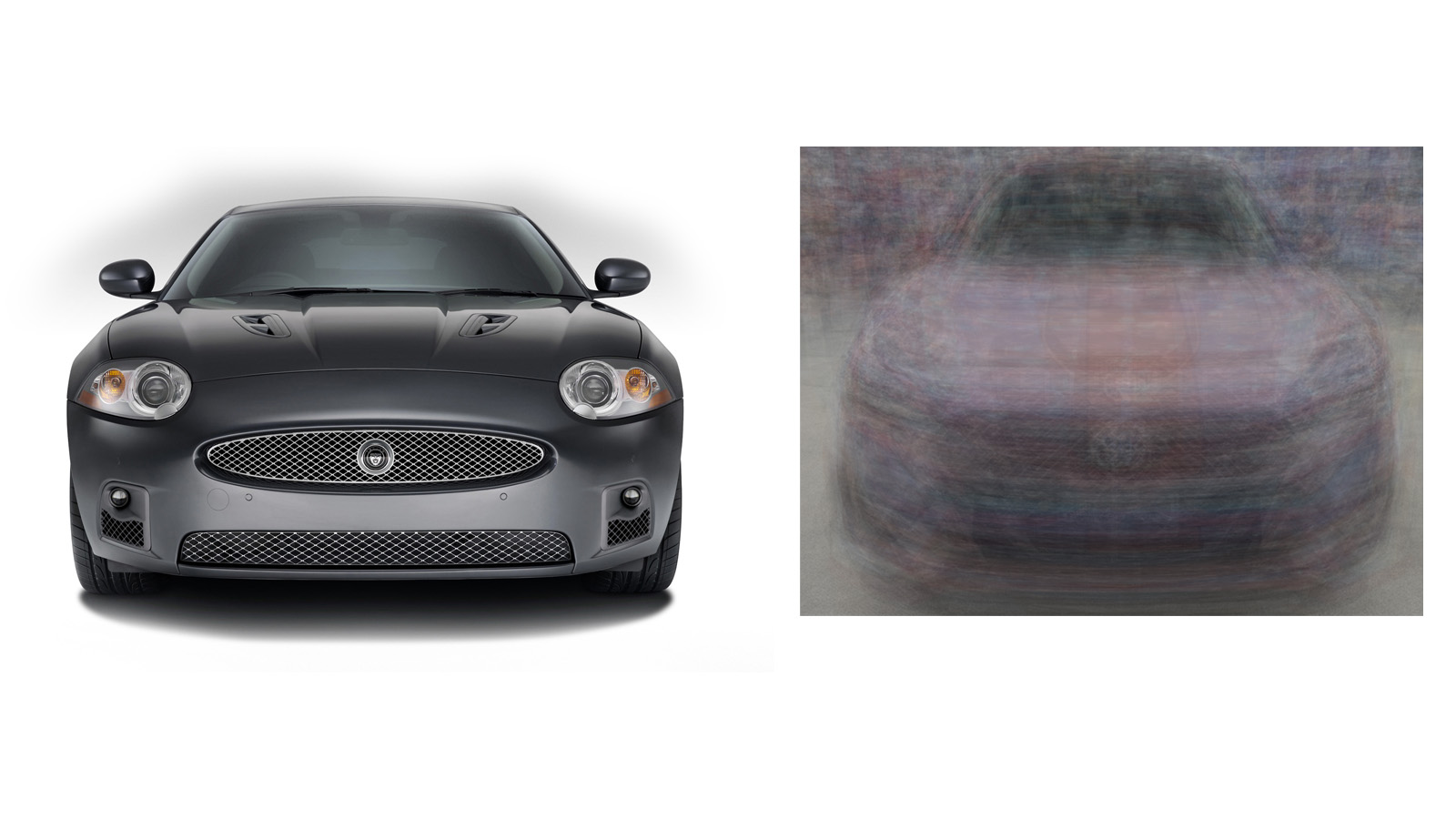 Kinda? Is it just me? Anyway, I’m curious to hear your thoughts, as always.

I'm a co-founder of the Autopian, the site you're on RIGHT NOW! I'm here to talk to you about taillights until you cry and beg me to stop, which I absolutely will not. Sorry. Hug? Also, David's friend.
Read All My Posts »
PrevPreviousThe 2023 Alpina XB7 Will Let Your Whole Family Experience Luxury At 180 MPH
NextI Am Uncomfortably Attracted To This Cayman Green 1992 Ford Escort GTNext