A few weeks ago, I went to the massive RV Open House in Indiana to see some of the latest and greatest in RVs. While I was there, I was disappointed not to see one of the weirder trailer companies today. Happier Camper makes vintage-style fiberglass campers with a novel modular floor. Recently, the manufacturer expanded its lineup with a trailer for businesses and this, the HC1 Studio. This trailer looks like the modular trailer that Happier Camper is known for, but finally features the all-important bathroom.

When I was at the RV Open House, one thing stuck out to me, and it’s that you don’t find a whole lot of innovation in RVs right now. Aside from projects like the Airstream eStream or small companies like Taxa, it seems that most manufacturers build some variation of a box on wheels with a place to sleep. One of the companies standing out as being different is Happier Camper. Its idea for changing the RV game isn’t self-parking or a trailer for overlanding. Instead, the Camping World-backed company offers camper buyers the ability to change their floorplan on the fly.

The Happier Camper story starts with Derek Michael. As Forbes reports, in 2009 Michael made the drop-proof iBallz case and went viral. To help sell the iBallz, Michael bought a 1960 Boler fiberglass camper to travel to conventions and shows with.

Michael reportedly fell in love with his Boler enough to buy and restore a second camper. Then, after people kept asking, he started renting the campers out. In 2014, Michael’s camper venture officially launched with a rental fleet of restored vintage fiberglass campers. Eventually, Michael got the idea that he should build his own campers, and along the way he decided to innovate with the idea of a modular layout. After three years of development, the Happier Camper was born.

When you buy a camper, you’re usually locked into whatever layout that you choose. Sure, most layouts offer some flexibility in that you can turn tables into beds or a bench into a bunk bed, but you’re largely stuck with what you bought. Happier Camper is among just a small number of companies trying to change that.

In 2015, Happier Camper launched its first trailer, the HC1. 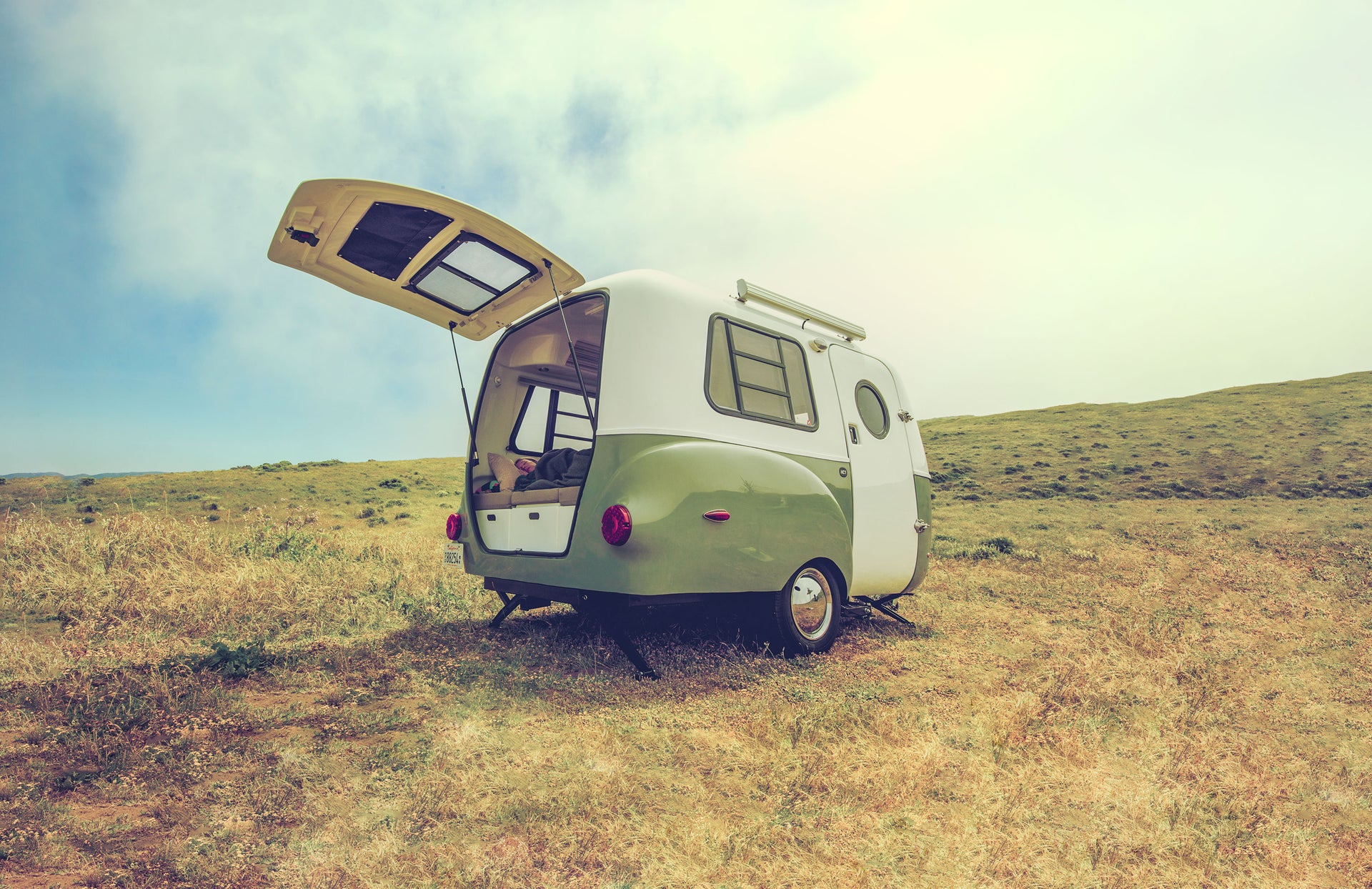 The little 13-footer looks like a Boler and the fiberglass trailer weighs in at just 1,100 pounds. That makes it towable by just about anything with an engine. However, the real trick to the HC1 is its floor. A Happier Camper has a honeycomb fiberglass floor with square slots. This allows pre-fabricated components to snap into place, like LEGO blocks. Happier Camper calls this the Adaptiv system, and I’ve really only seen something similar with the Sea-Doo Switch Pontoon boat.

The awesome part about the Adaptiv system is that you could configure your Happier Camper to be a motorcycle trailer one day, and have it be a camper the next. Or you could arrange things to have a hybrid toy hauler and camper. Happier Camper sells modular cubes that consist of benches, countertop cubes, a kitchenette cube, a bunk bed cube, and even a toilet cube. The little HC1 costs $34,950 and it seems pretty awesome, but you may have noticed that I didn’t say that it comes with a shower.

At first, if you wanted a shower in your Happier Camper, you had to step up to the $69,950 Traveler. 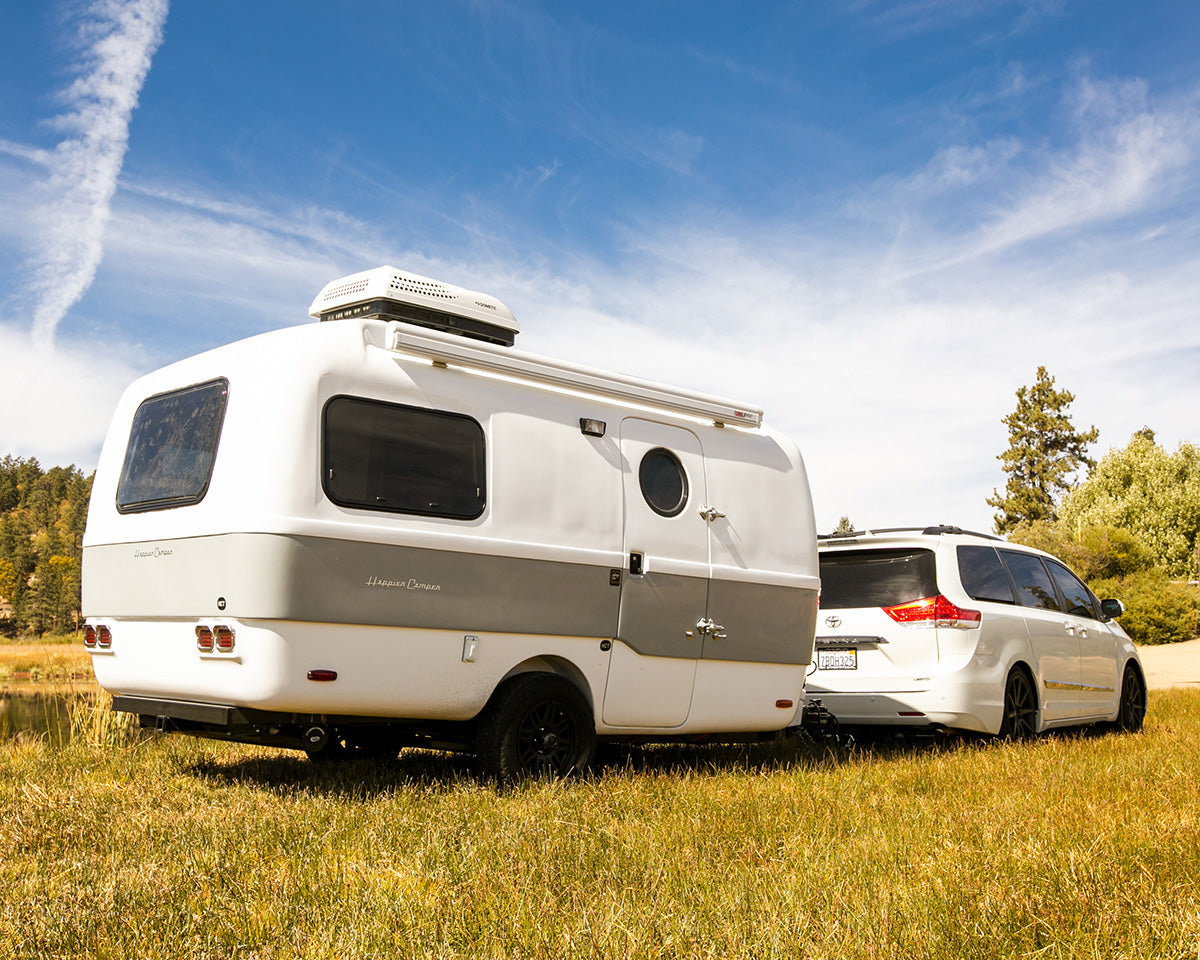 That trailer weighs 1,800 pounds and is a total of 17-feet-long. It has the nifty Adaptiv system in addition to a shower and a fixed kitchen, but loses some practicality as it doesn’t have a huge door to load things through.

Splitting the difference between the two is the recently launched $49,950 HC1 Studio. 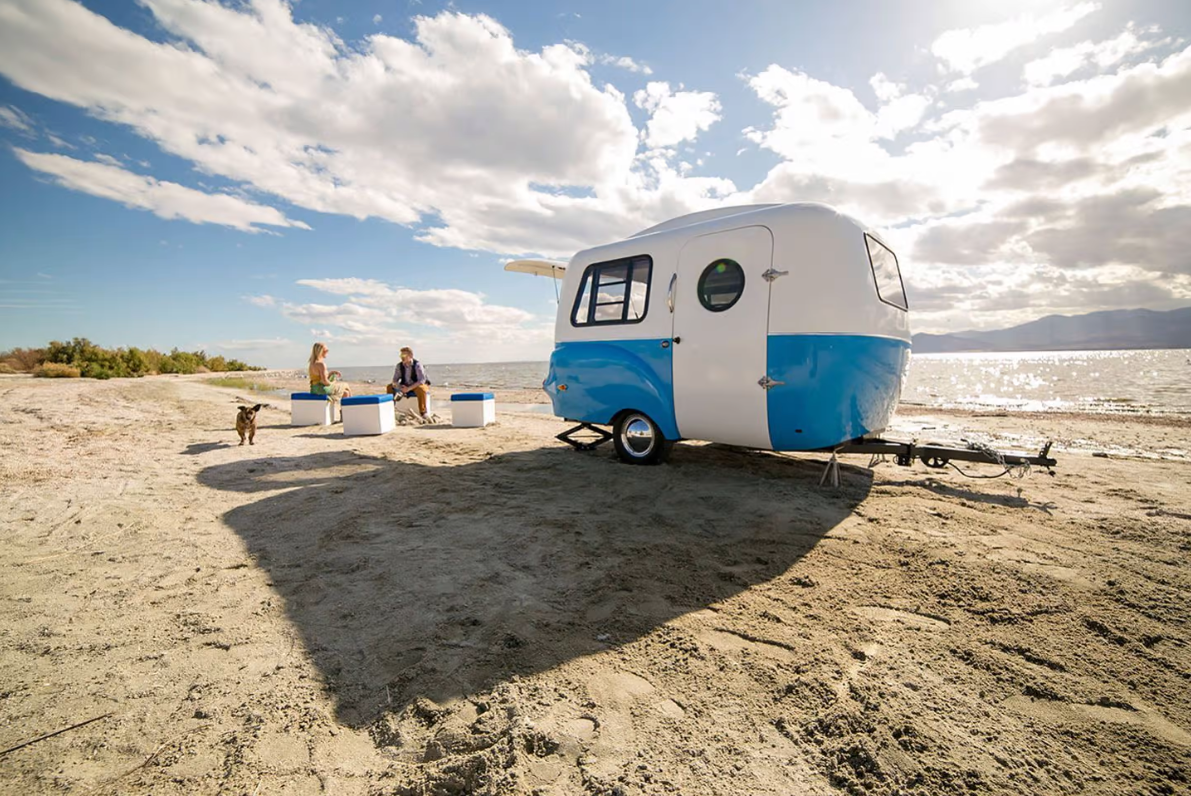 This camper brings the fixed bathroom and fixed kitchen of the Traveler to the smaller HC1. Of the three, this is my favorite. As I’ve written about with Taxa’s campers, huge opening hatches add an airy feel to a tiny camper. Plus, the HC1 Studio retains most of its modular cubes. So you can still use it for utility while also using it as a camper. Just now you don’t have to shower outside if you don’t want to. 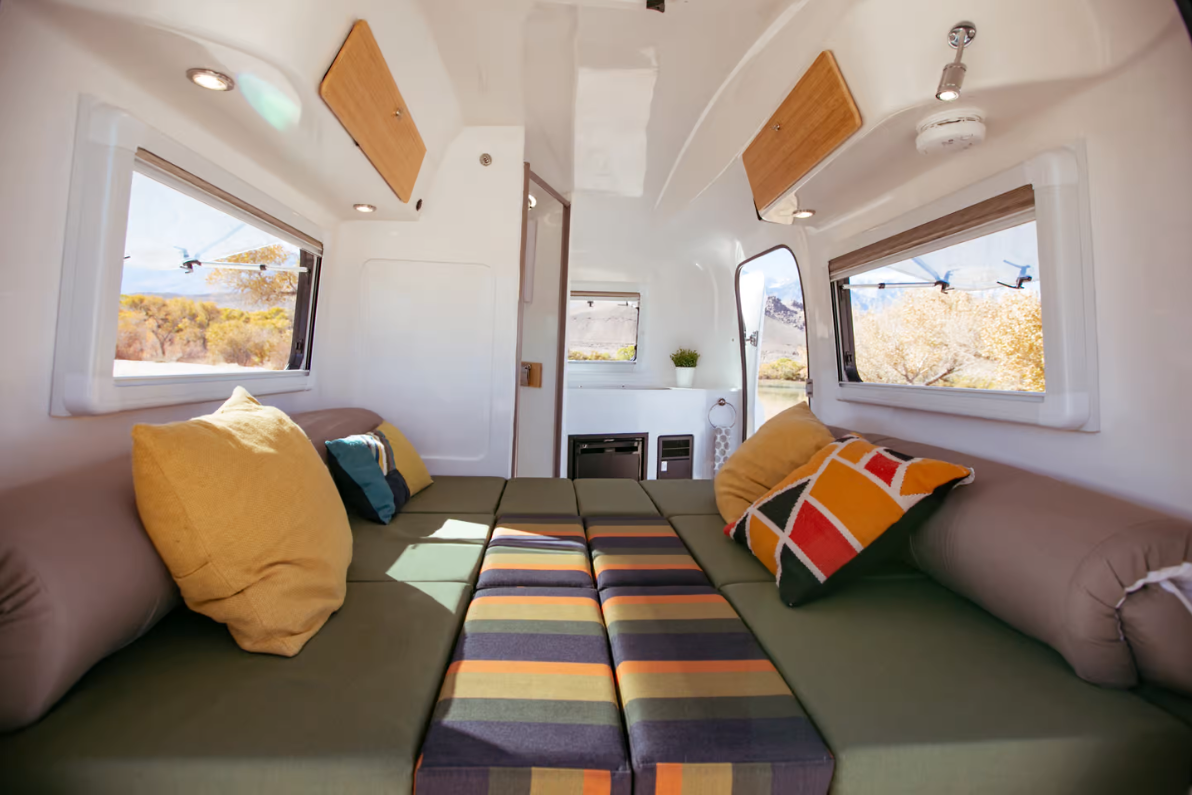 For that $49,950 price, you get a kitchenette with a sink, two-burner stove, and fridge. You also get the bathroom unit. The shower is fed by a 17-gallon fresh tank and drains into a 17-gallon gray tank. In addition, Happier Camper says that you get these blocks:

If you want the trailer to be better-equipped to camp off-grid, you’ll have to pay $54,950 for the Premium package, which adds a 12 volt air-conditioner and a solar panel. Somehow, the addition of the bathroom unit balloons the trailer’s weight to 1,800 pounds. That’s the same dry weight as the Traveler, which doesn’t make sense to me. Perhaps that is a typo. 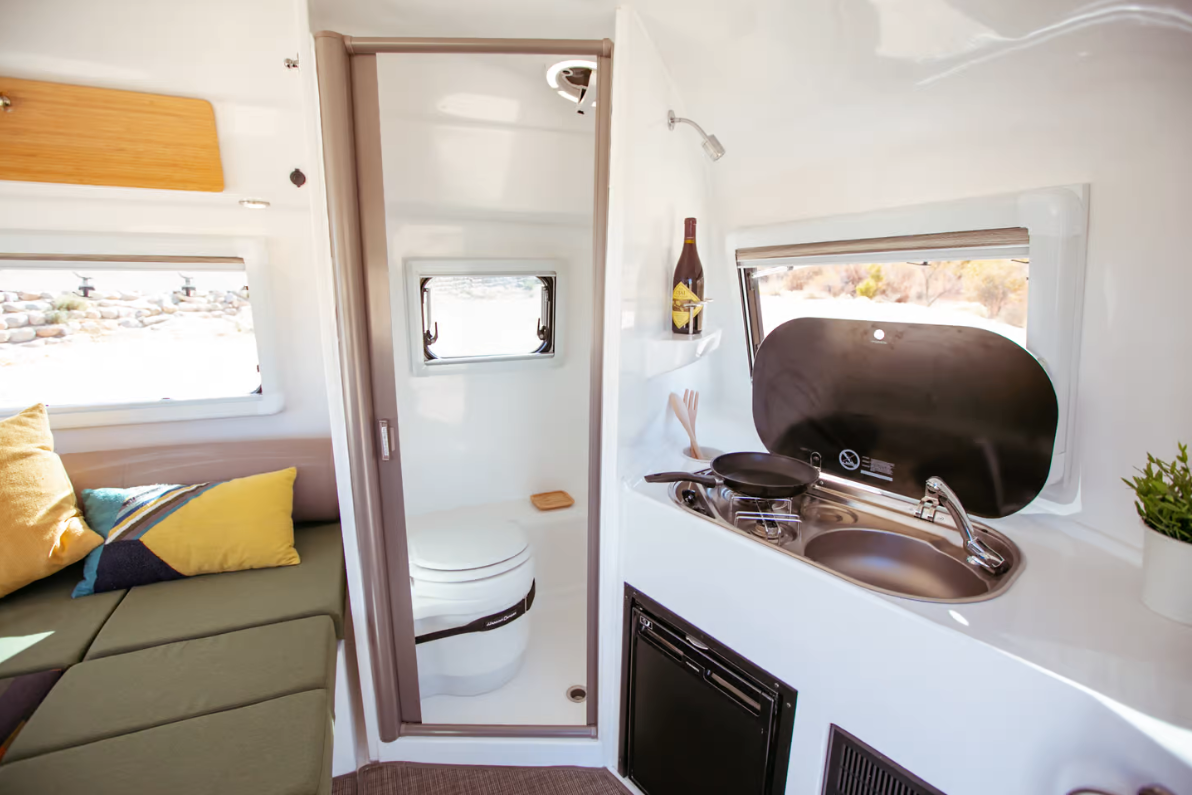 This is indeed quite a lot of money for a 13-foot trailer (which gives you 10 feet of living space), but as I’ve noticed during the Open House, prices like these are pretty normal right now for a camper with decent quality or a novel feature. In a later article, I’ll show you what paying less money than this gets you.

I should also note that Happier Camper is not the only company offering modular camping solutions. ModVans wants to give you a modular interior for at least $59,121 plus the cost of a van. And VanLab has a $10,000 modular kit that turns a van into something that looks like it came from an IKEA. But if your preferred flavor of RV is a trailer, Happier Camper is in a class of its own. SylvanSport has a concept for a modular camper trailer, but after three years of development you still can’t buy one. 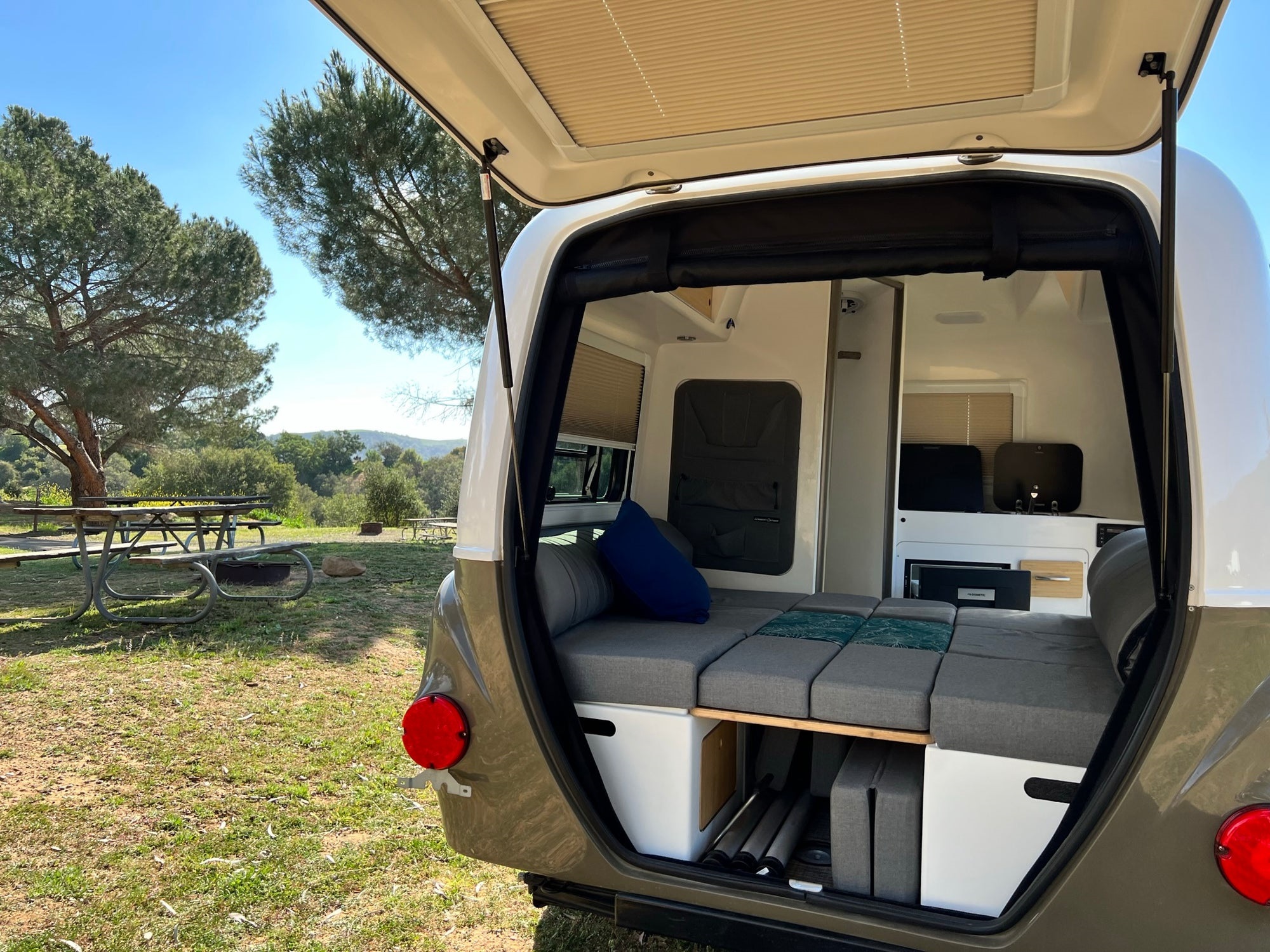 This is another camper that I’d love to test out. It’s about the size of my U-Haul project, but it’s not stuck in a single configuration. For some people, that alone is worth the price of admission.

Mercedes is a lifelong fan of all things powered by an engine. When she isn't driving one of her five Smart Fortwos or her 14 other vehicles she could be found in the cockpit of a Cessna 172 or perhaps swimming in any body of water that she could find. She also has a deep love for buses of all kinds. Please send her buses. mercedes@theautopian.com Instagram: @mistymotors Twitter: @Miss_Mercedes30 Facebook.com/neonspinnazz
Read All My Posts »
PrevPreviousGM Launches New GM Energy Division So Its Electric Vehicles Can Feed The Power Grid
NextThe Jaguar F-Type 75 And R 75 Special Editions Remind Me Why I’m Going To Miss The Absolute Hell Out Of The F-TypeNext