I have a few larger-scale stories percolating at the moment, but I can’t just sit here and pretend I’m not incredibly distracted by hyper-important documentation of The State Of Taillights And Turn Indication Past as presented to me by this 1952 Bosch Accessories catalog. There’s some fascinating things in here – well, fascinating to automotive lighting fetishists such as myself – and, yes, a radio that I’m pretty sure will make your car slower, at least a bit. Let’s take a look. 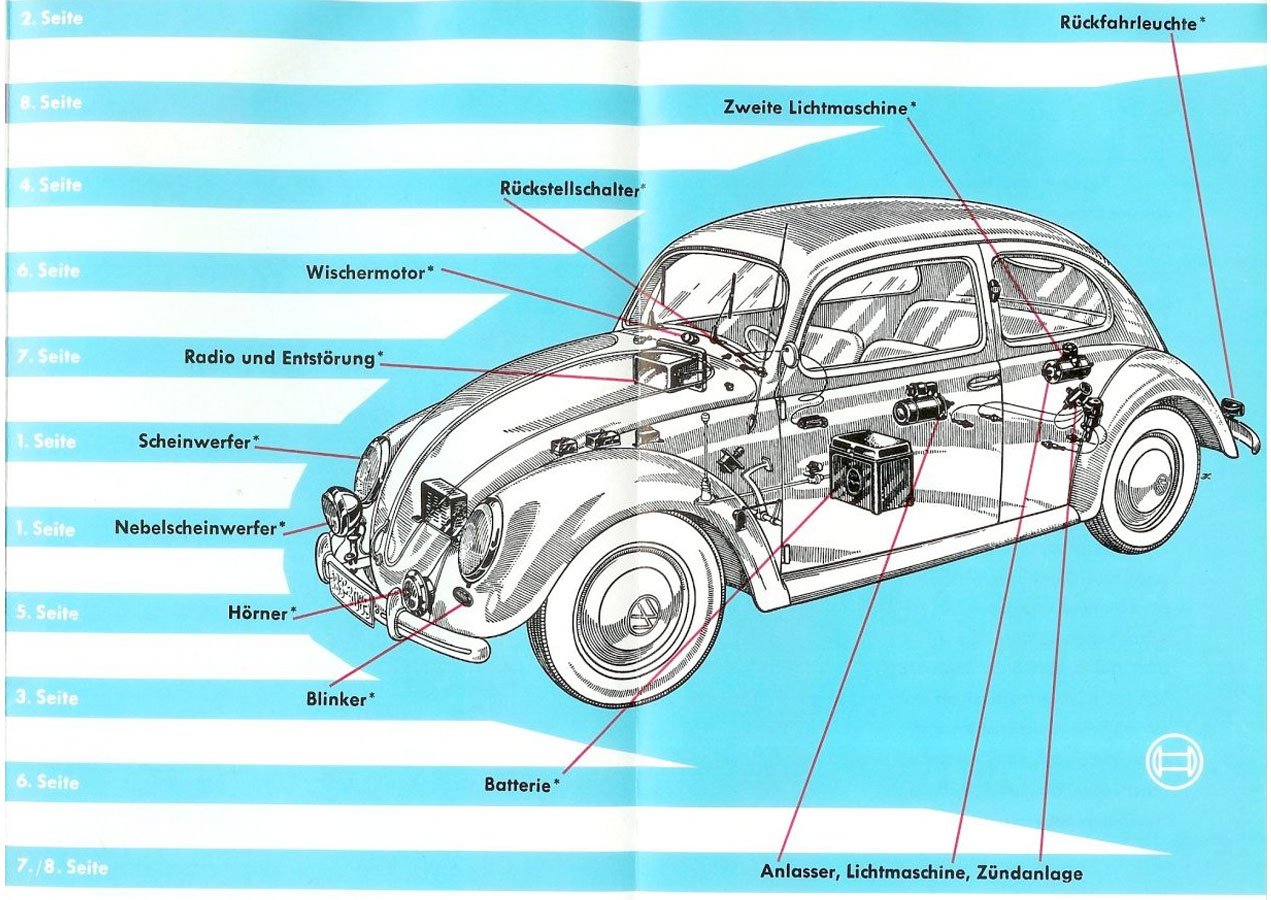 One thing worth remembering as we explore this catalog a bit is just how minimal the electrical systems of cars were in the early 1950s. You may expect this on a simple, frugal peoples’ car like the Volkswagen, but even American cars of the era, with many more power-assisted creature comforts, were likely to use things like vacuum power for wipers and power door locks and windows and so on, because electric motors were still expensive and complex. So, an accessory electrical part catalog like this one from 1952 is going to have what we’d consider today to be really basic stuff. 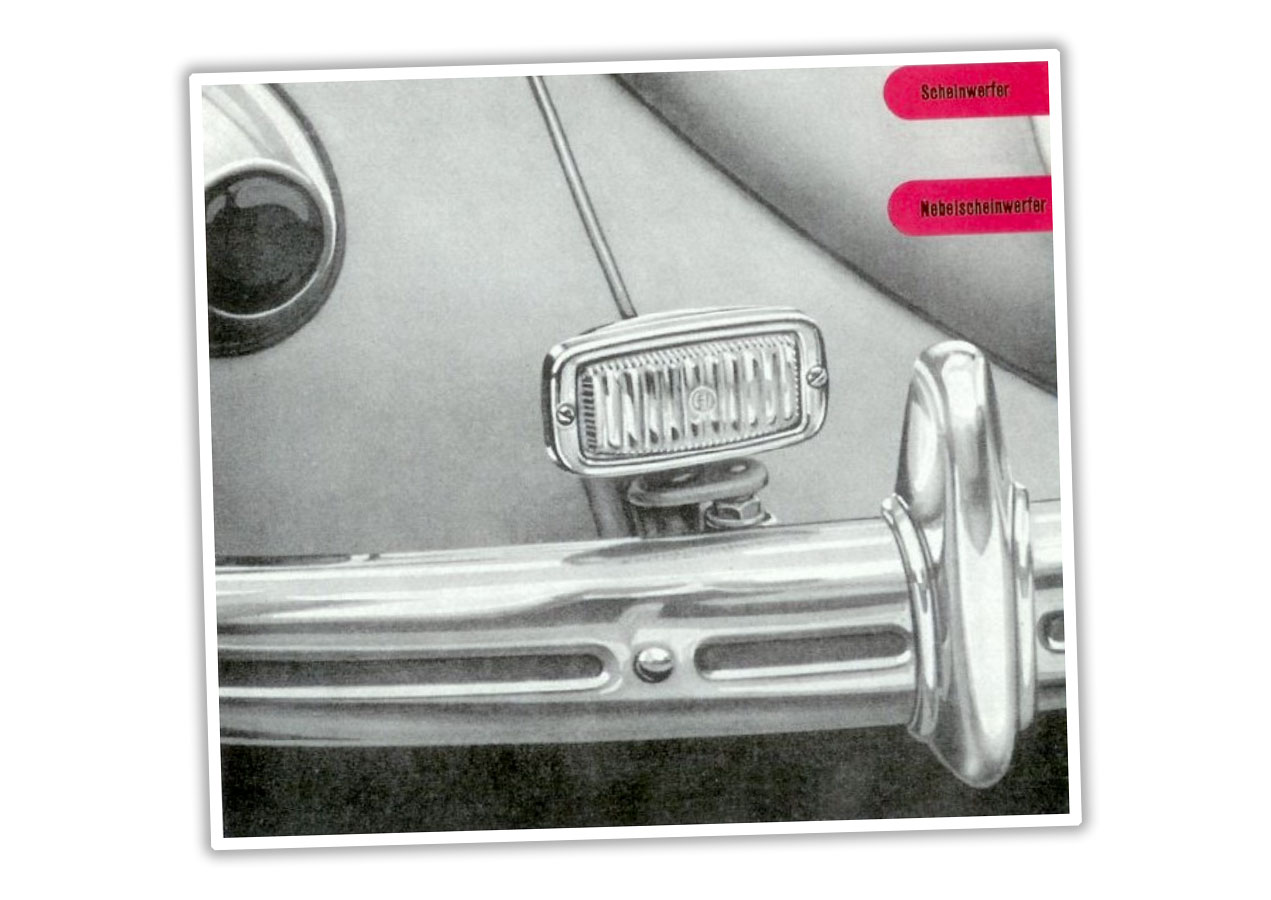 Yes, a reverse lamp! These wouldn’t be required in America for another 15 years after this catalog was published, and later in Europe, but for forward thinkers who liked to see when going backwards, Bosch had you covered. These look to be almost identical to the factory-installed reverse lamps that VW was using on US-spec cars in 1967.

As you can see in the corner of that picture there, early VW taillights were tiny, simple things, and only performed two functions: taillights and brake lights. The indication of turns was handled mechanically via wonderful mechanical semaphores or trafficators:

While you or I may find these absolutely charming, there were many people in the semaphore era that felt the visibility of the little arms wasn’t great, and the arms, being electromechanical things with moving parts, were much more likely to break than a simple light. Many cars already employed blinking light turn indicators, and Bosch gave VW owners this option as well, at least three years before VW implemented them for 1955 US-spec cars.

These aftermarket turn signals could be the earliest blinking-light turn signals you could get for your Beetle, at least ones specifically marketed to VWs. Here’s what Bosch’s indicators looked like, front and rear: 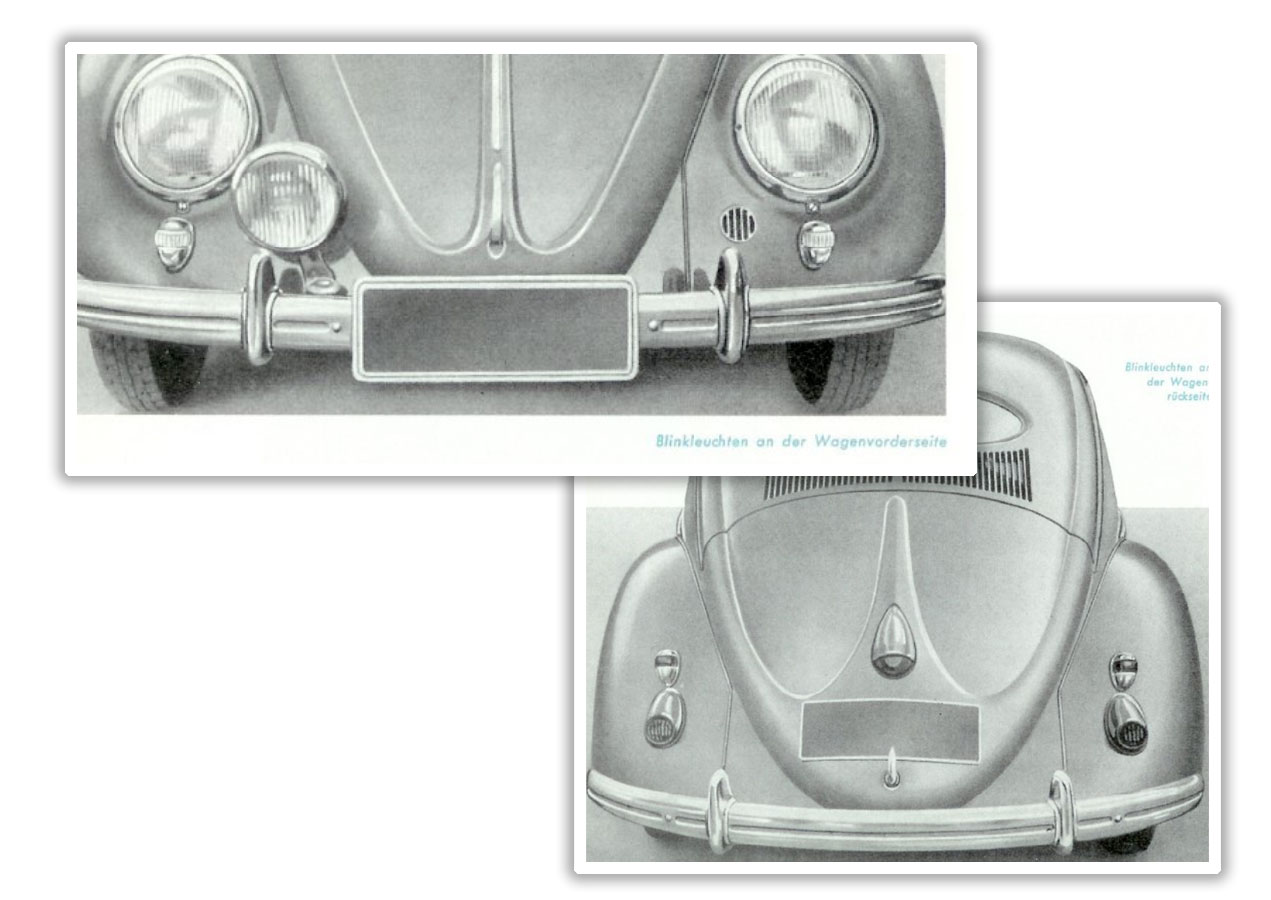 They’re kind of an odd design, really, and I’m kind of surprised that they seem to be different units, front and rear, when you’d think the same unit would have worked for both. It’s grayscale printing in the catalog, but for the era I’d expect that the front ones were clear and the rear red, as this was an era before amber indicators on either end.

I think the front ones look a bit better than the rear ones, which visually compete with the taillights in a sort of strange way. Still, I like them, and I suspect they would have been more visible than the semaphores.

One odd thing, too:

The blinker in the big cutaway picture is of a different design than the one shown in the catalog! What are you trying to pull here, 70-year-old Bosch catalog? 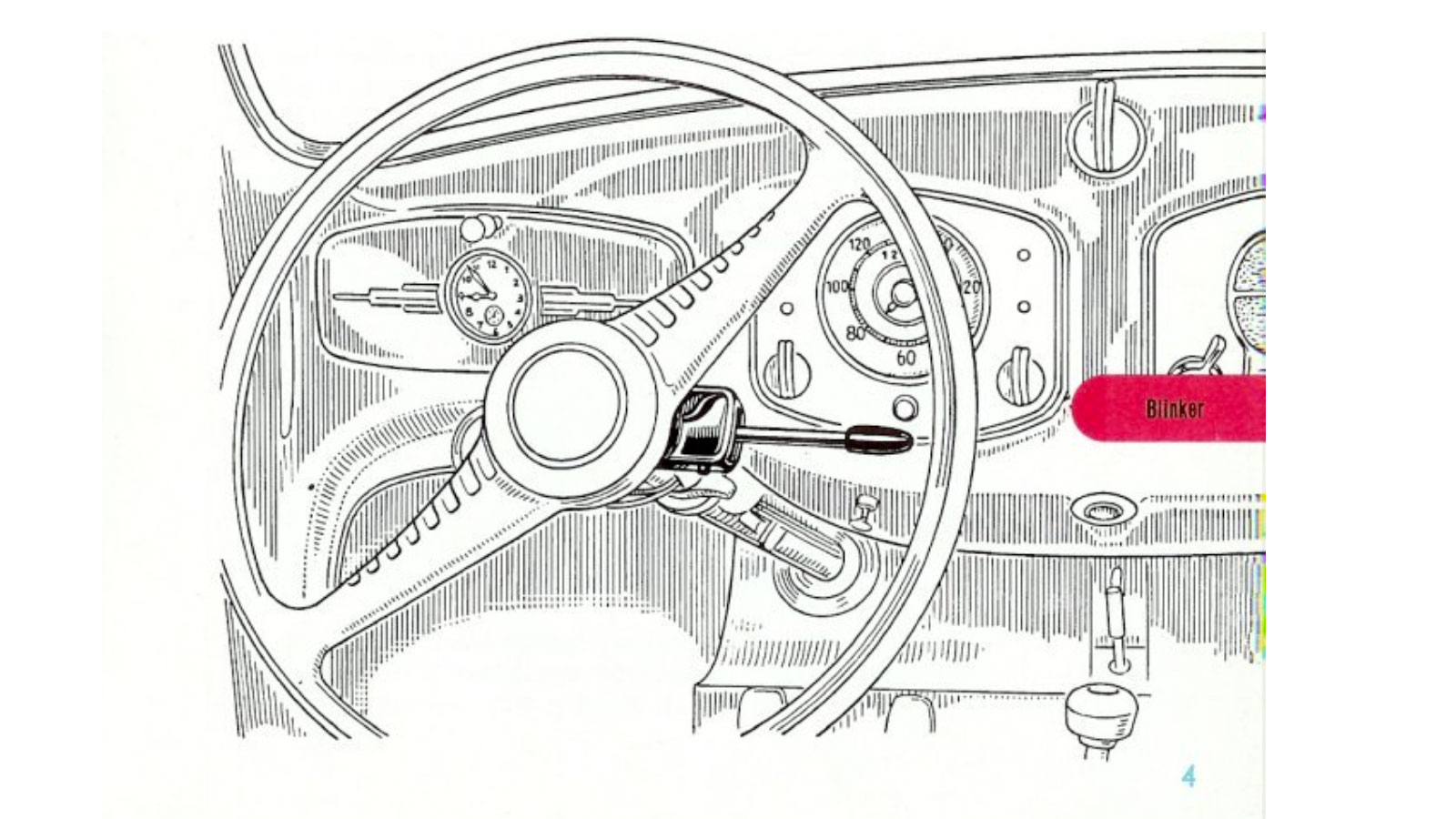 Also interesting is the blinker switch, which clamps onto the steering wheel with the familiar lever we’ve all used (this is where you can make your BMW driver jokes, by the way). But what I like is that the semaphore indicator switch is still there, right at the top center of the dash, meaning a Beetle so equipped would have redundant methods of turn indication, triple, even, if you count hand signals. That’s impressive.

Also notable is that clock in the driver’s side glove box door, which I would have thought might appear in this accessory catalog, but doesn’t. I didn’t think those were factory?

Okay, I’ve teased you long enough with this radio-that-slows-you-down business. So what am I getting at? Here’s the radio in question: 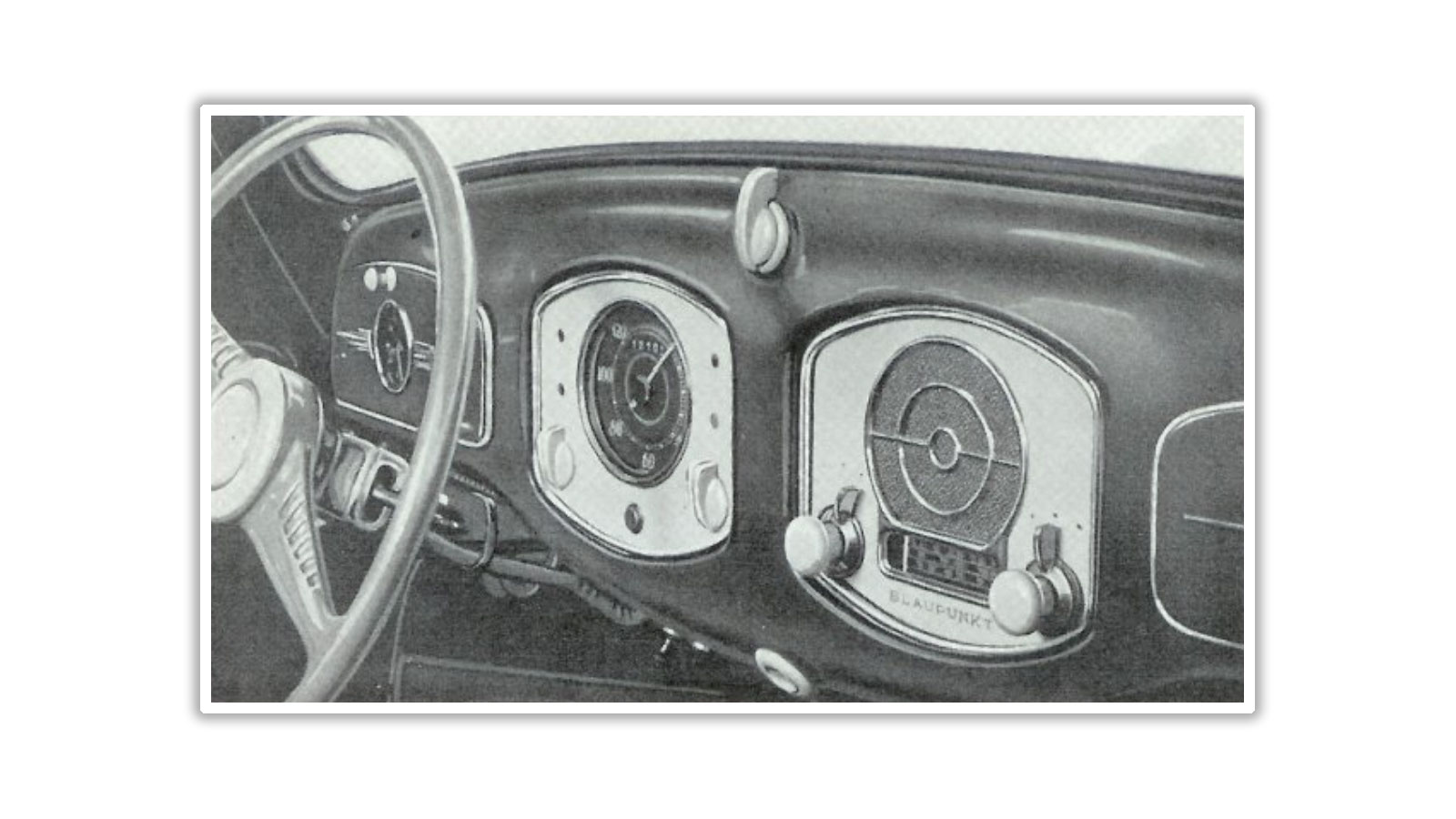 Nothing too crazy there, right? Just an early-’50s Blaupunkt AM radio. So why would that affect the car’s performance? Well, here’s why: 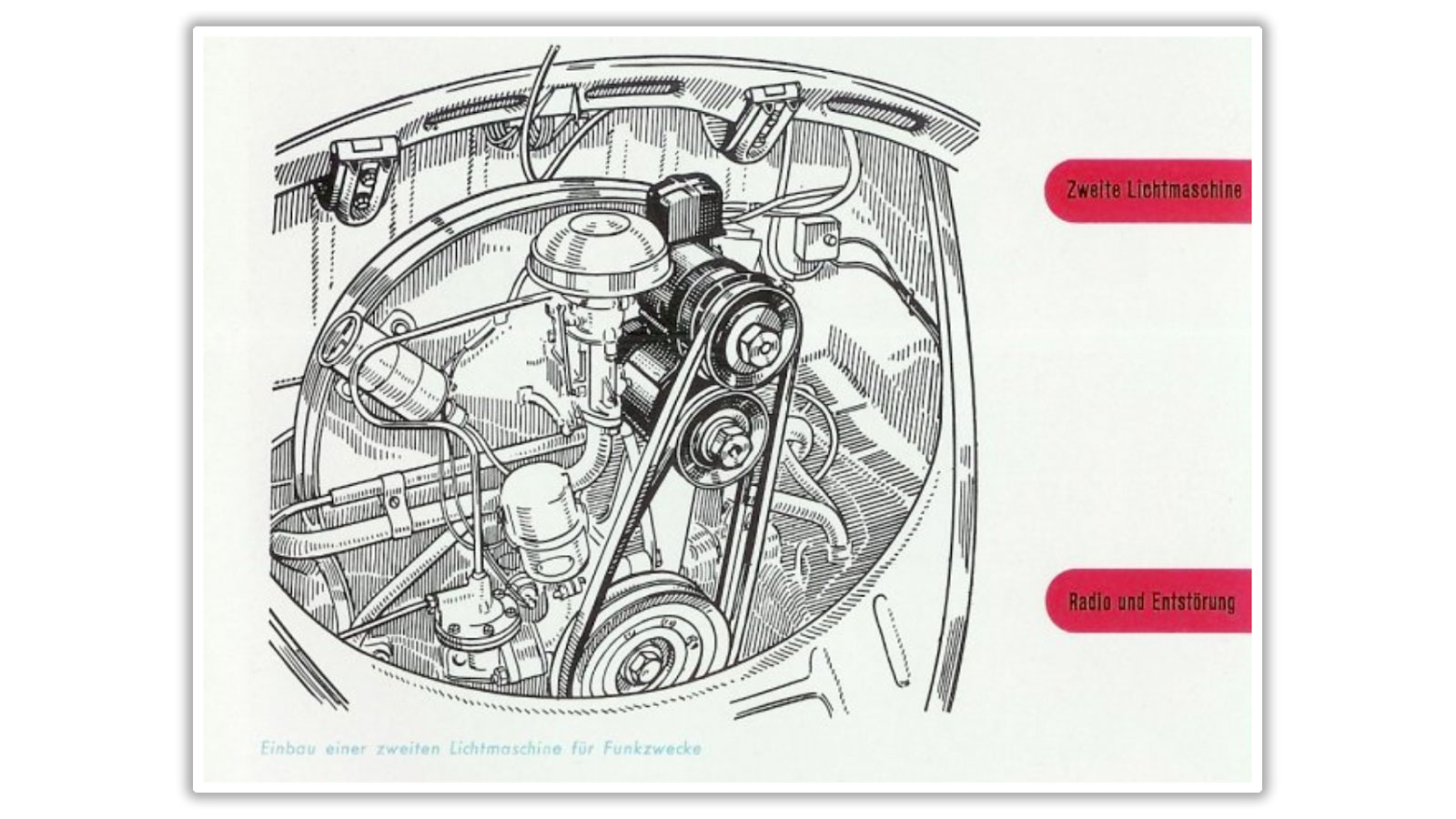 You see, to run this radio, your little 1131cc air-cooled motor making all of 25 horsepower would need this second generator installed, making the 150 watts needed for the radio. That means a new double pulley on the crankshaft which now must spin the stock generator and the extra radio generator, and I know that had to take some sort of toll on engine output, and when you’re only dealing with 25 hp to start, I’m gonna guess you could even feel it.

I feel it when my Nissan Pao has the A/C on, and that pulley is adding drag to the engine. I don’t think a generator is as taxing as an A/C compressor, but the Pao has over twice the power, so I’m standing by my claim that when the radio is cranked, you’re going to be driving slower, at least a bit.

What I don’t know is if that alternator was directly wired to the radio, or if it fed the car’s electrical system as a whole, which would make it pretty cool as a backup system, and maybe could charge the battery faster?

I'm a co-founder of the Autopian, the site you're on RIGHT NOW! I'm here to talk to you about taillights until you cry and beg me to stop, which I absolutely will not. Sorry. Hug? Also, David's friend.
Read All My Posts »
PrevPreviousThe 75 MPG Geo Metro Experimental Aero Car Is What You Get When An Engineer Wants To Send A Message
NextCold Start: Soft ServeNext