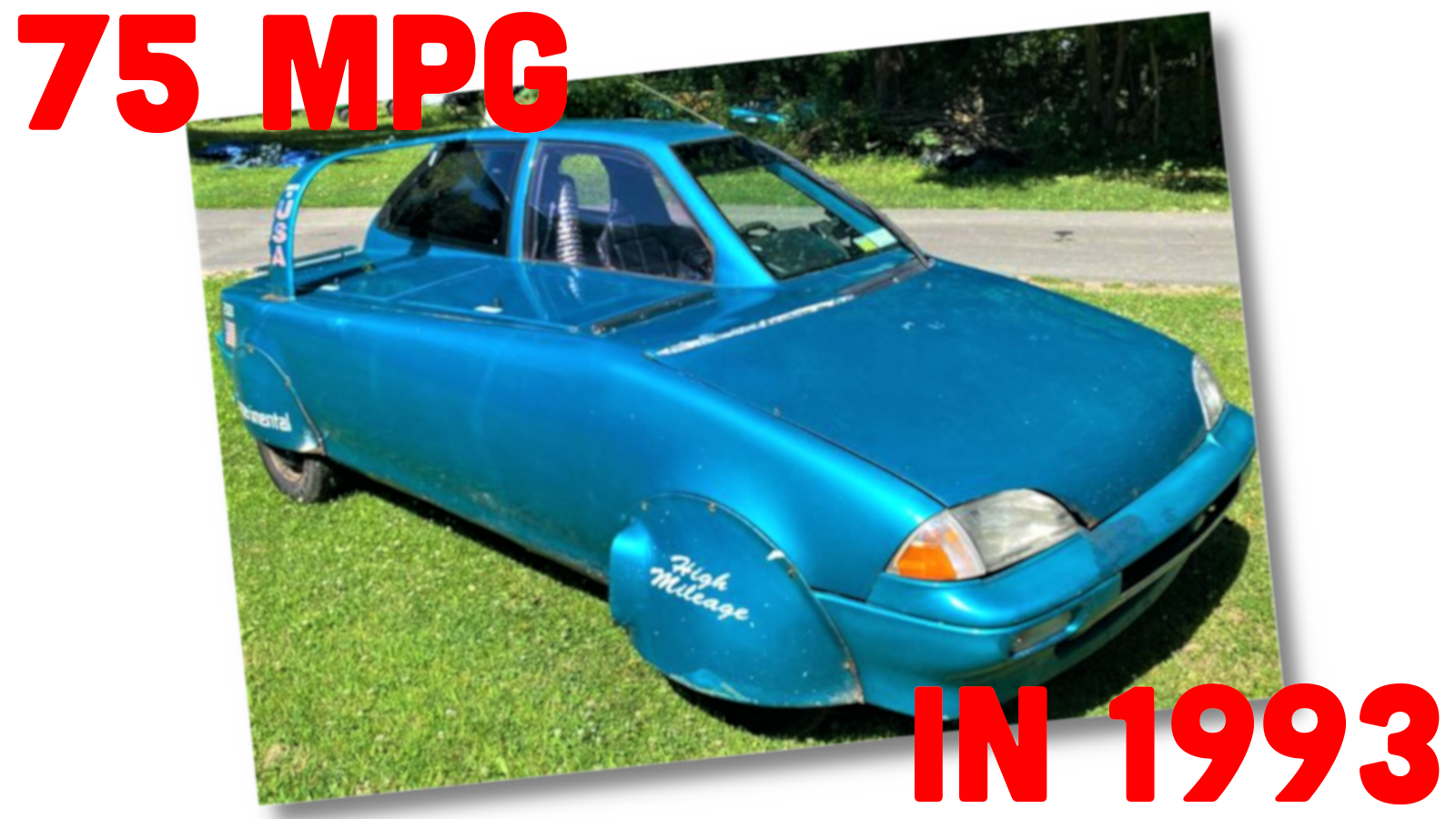 Currently gracing the pages of Facebook is a little car with a fun story to tell. The 1989 Geo Metro Experimental Aero Car is the brainchild of an inventor who had some novel solutions to a few problems faced by normal, everyday people. It looks like a spacecraft and rolls by fuel stations as it sips on gas at a rate of 75 miles-per-gallon. This car is one man’s message to automakers that they could do better.

Not just one, but three readers sent in this lovely creation. Thank you all, Alexander, Cory, and Joshua. It’s easy to see why this little car is causing a stir. I mean, it’s not everyday that you see a creation like this just pop up for sale. Sadly, by the time that you read this the Metro has been sold. Whoever bought it got a decent deal, I think. It was just $3,200 and it still ran, but had bad brakes. Not bad for a neat one-off car.

But I think that it’s still important that the world knows about this car and the man who created it. And I think a 1993 issue of the Syracuse Herald American newspaper summarizes what you’re looking at here perfectly: “Kirkville man cut car in half to make a point.”

The Geo Metro “Experimental Aero Car” is the work of Douglas M. Heffron. While not much has been said about Heffron’s early life, his adult life was reportedly full of adventure. In that newspaper clipping it’s revealed that Heffron worked as a machinist and a welder. During his time in the Army, he used his skills to keep Medevac helicopters flying. And at home, he let his gearhead side flourish as he hot-rodded and restored cars.

So, what was a hot rodder doing making a hypermiler’s dream? As the newspaper wrote, it was his daily 50-mile work commute that turned into part of the inspiration. Another part was when he arrived at work, he noticed that most people had arrivee by themselves in their car. Of course, using the family car (or worse, SUV) to drive just a single person can be wasteful, and it’s something that automakers and governments alike talk about today. But while a government may want you to carpool, Heffron had a different idea. What you just drove a hyper-efficient car to work? The newspaper said that Heffron called it the “working man’s car.”

In an interview with Metro MPG about the car, Heffron said that he spent two years (the newspaper says three) researching and designing the car. He even built clay models before doing the real thing. Heffron was going to make his working man’s car by shaving off a ton of weight from a donor car while making it more aerodynamic, too. In the interview, he noted that he had experience as a flight instructor and that he built his own experimental aircraft. That experience was going to be used to make this car.

Heffron bought a 1989 Geo Metro for the project. Metros weigh in at roughly 1,600 pounds and in 1989 they were rated at 52 mpg on the highway. And of course, they can be had for cheap.

According to the newspaper, Heffron worked on the car like it was his job. He spent 16 hours a day on the car over the course of four weeks during his vacation. And what you see here is all his work. He did everything from the custom metalwork to cutting the glass. He even modified the Metro’s fifth gear to be taller on his own.

And it’s all road legal. Assuming that he worked every day of those four weeks, his over 450 hours of work and $1,300 of investment culminated in a vehicle that passed state inspection. In the Metro MPG interview, Heffron said that he drove the Metro mostly on the highway and didn’t employ any special driving tricks. But what he did to the car allegedly got it to average 75 to the gallon, a solid 23 mpg improvement over stock.

How did he do it?

A huge part comes down to the fact that Heffron just hacked away much of the car. Shedding much of the interior and metal shaved off 300 pounds, a pretty significant amount of weight in any car, let alone one this small. That weight reduction involved reducing the cabin to just a sliver on the left side.

Inside, the car is really basic, with just those uncomfortable lightweight buckets fashioned in a tandom seating layout. But the end result is a smaller frontal area for the car to push through the air.

The rest of the body is smoothed over for aero, including wheel well skirts. And thankfully, Heffron made sure to use the now dead space for practicality. He said to Metro MPG that the right side has covers that flip up, revealing a cavernous storage area. It could carry 16 grocery bags or a bunch of 2x4s. Sure, you lose space inside, but you gain practicality.

And I bet that you’re wondering about that hoop in back. Heffron said that hoop is functional, offering some roll protection while helping to keep the car stable at speed.

As both the newspaper and Metro MPG noted, part of Heffron’s goal was to send a message to automakers that they could be doing so much better with fuel efficiency. He noted that he sent out 18 letters to various state governors in hopes that the government would pitch the idea to automakers. Sadly, Heffron said that the reply was that “it was something they were not set up to handle.” It’s unclear if that reply was from the governors or automakers.

Either way, Heffron’s creation really stands on its own. Later, Honda would do something somewhat close to this idea with its first-generation Insight. And you cannot forget Toyota’s Prius and Volkswagen’s wild XL1. But Heffron showed what was possible with early 1990s technology. And as Metro MPG noted, he could have done even better. His aero design wasn’t super optimized. For example, even more frontal area could have been removed and he could have added a flat pan under the car to clean it up further. Still, 75 mpg would be impressive even today.

Heffron went on to build other inventions like a self-driving lawnmower that followed a wire. He also thought up a little airplane that flew inside of a lightbulb. Heffron passed on July 20, 2021 at the age of 77. He’s remembered for his inventions, a number of which we may never know about. As I noted before, this incredible car did sell today. The seller only answered a single question that I asked, and revealed that the car was in running shape, but the brakes weren’t working. Hopefully, the new owner gets the car back on the road and enjoys this creation for the wonder that it is.

Mercedes is a lifelong fan of all things powered by an engine. When she isn't driving one of her five Smart Fortwos or her 14 other vehicles she could be found in the cockpit of a Cessna 172 or perhaps swimming in any body of water that she could find. She also has a deep love for buses of all kinds. Please send her buses. mercedes@theautopian.com Instagram: @mistymotors Twitter: @Miss_Mercedes30 Facebook.com/neonspinnazz
Read All My Posts »
PrevPreviousSmart Once Attempted To Boost Sales In America By Trying To Rebadge Nissan Micras
NextThis Vintage Aftermarket Bosch VW Accessories Catalog Features A Radio That Makes Your Car Slower And Fantastic Turn Signals And TaillightsNext