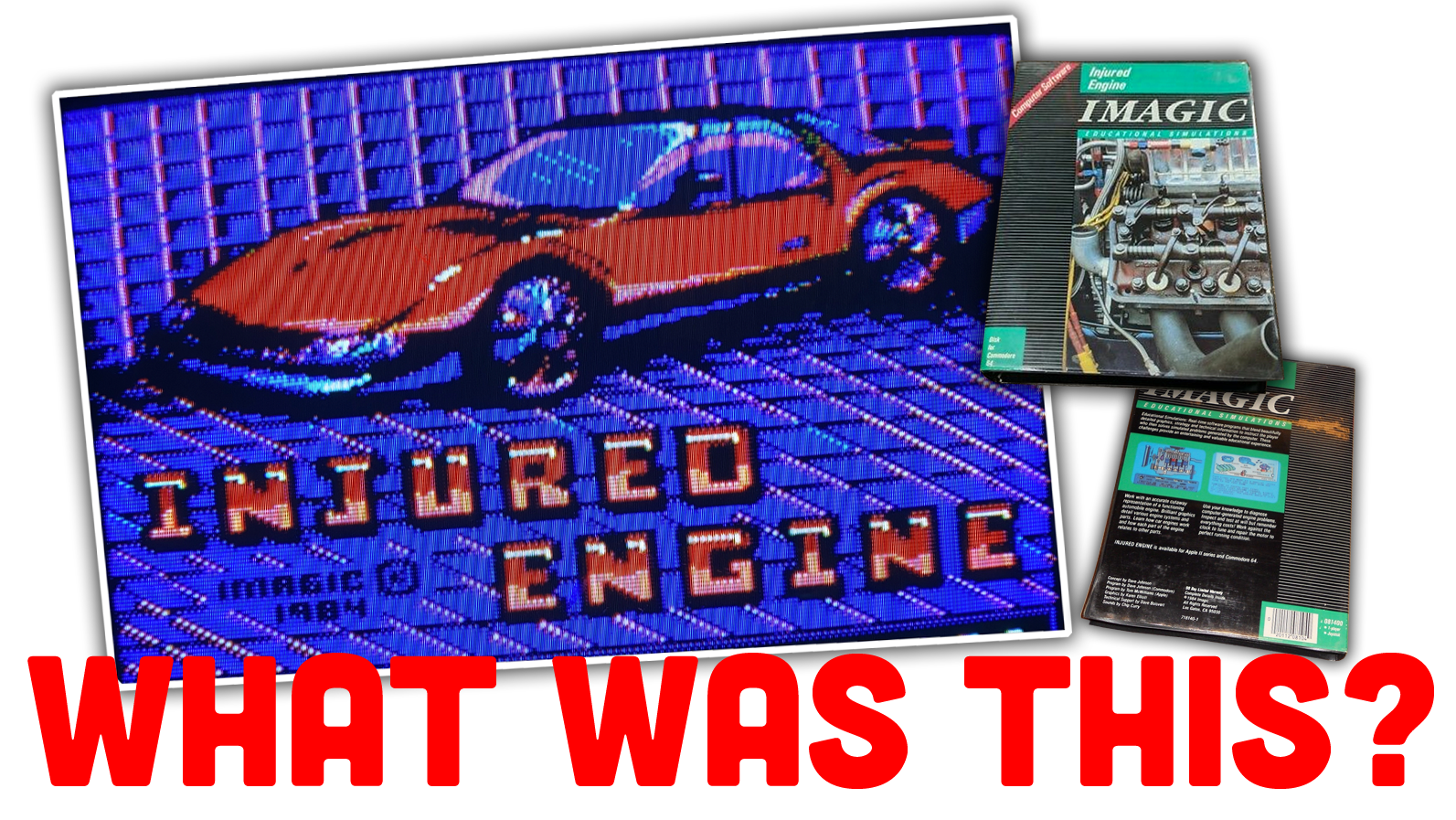 Cars and video games have been linked for a long, long time. Racing and driving games were some of the earliest video games around, and have been a staple for years. Aside from actually driving cars in games, other aspects of the automotive world haven’t been as well represented. There was one strange and notable exception from nearly 40 years ago, an attempt to bring auto repair into the realm of video games. I’m not certain I’d call it successful, but it was fascinating, and was a precursor to modern engine diagnostic training simulations today. It was a program called Injured Engine, from 1984.

Injured Engine was published by Imagic, a company that was the second third-party video game developer ever: Activision was the first, founded by disgruntled Atari employees, and soon after that other Atari programmers left, emboldened by Activision’s success, and founded Imagic, which released its first Atari 2600 games in 1982. 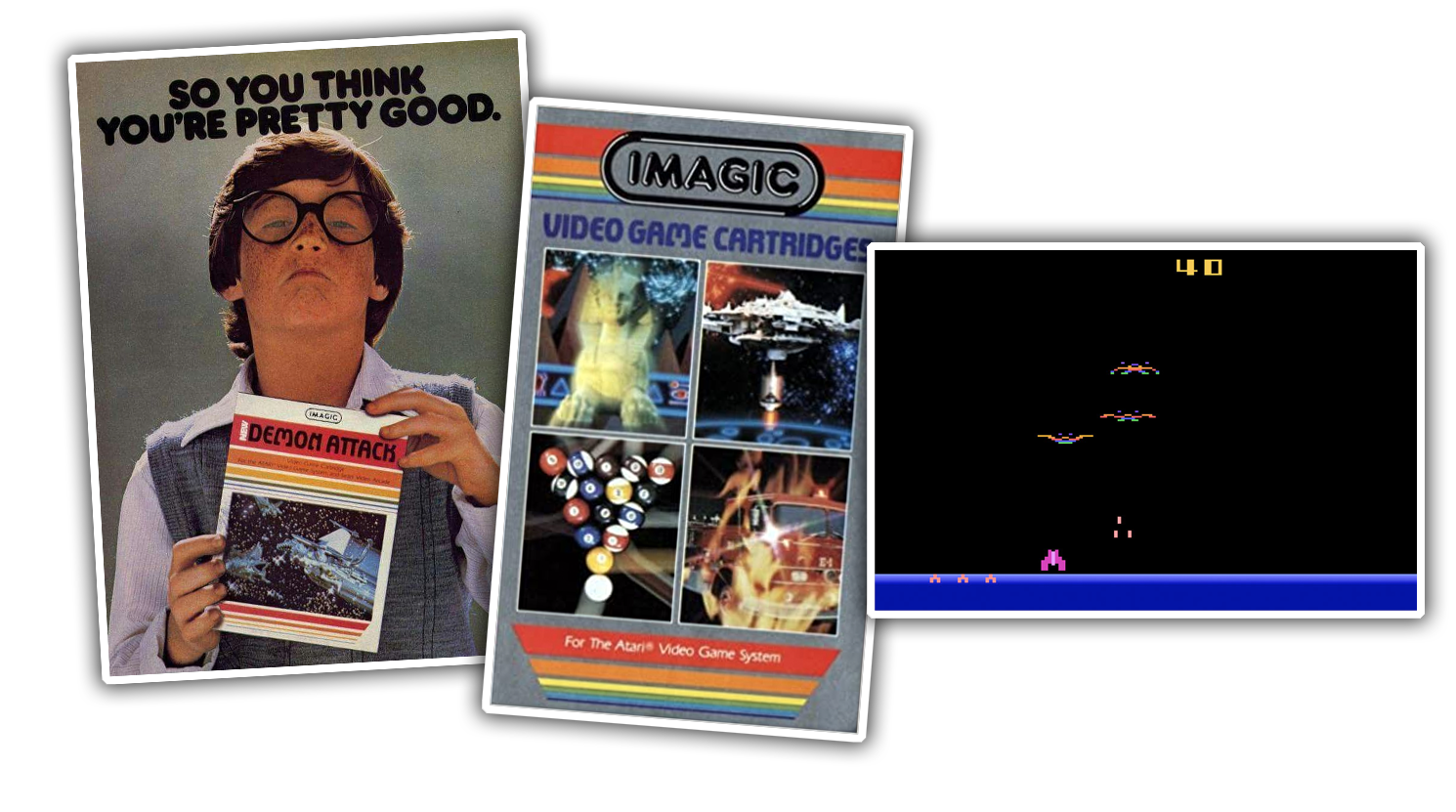 The company started with some very good but fairly conventional games: shooting games, strategy games, adventure games, and so on. That’s why I think Injured Engine is so interesting, because it came out only two years after Imagic’s first batch of games, and is something so very different.

Injured Engine was a game, but it also was something a bit more, something that perhaps approaced the idea of a simulation, albeit a very limited one. It was only released for two platforms, the Apple II series and the Commodore 64, both popular home computers of the time, and both having more power than most of the video game consoles then widely available, which made sense, since it seemed to have somewhat bigger goals. 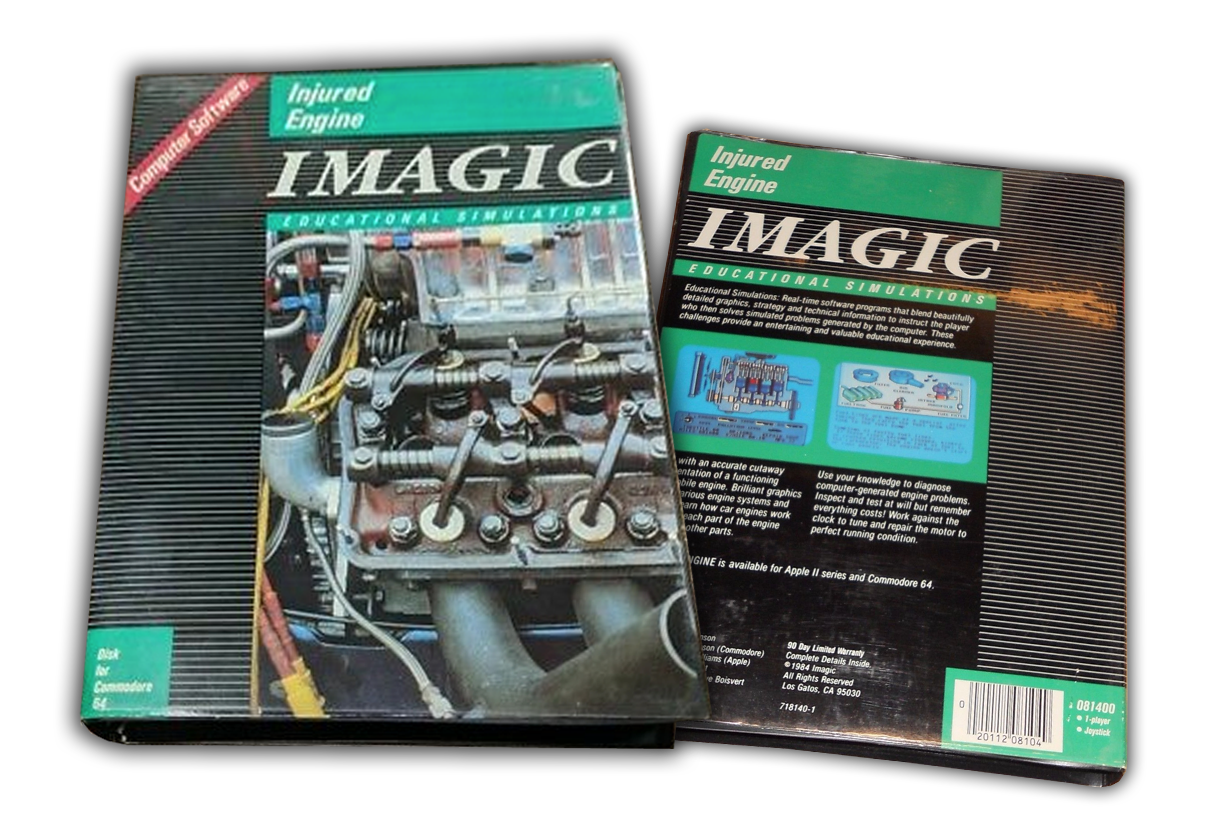 It’s hard to find much information about the game; the concept was by Dave Johnson, who programmed the Commodore version, and the Apple version was programmed by Tom McWilliams. Karen Eliott did the design, and, I have to say, did a truly masterful job, especially considering the era.

The Apple II version was capable of using what was known as the Double High Resolution mode, which required 128K but could offer 560×192 resolution with 16 colors. The true color resolution was more like 140×192, but with black and white you could get the full 560–you can see an example of what I mean in this screenshot; look how smooth the ring around the tachometer is, white on black, compared to the fan, which is over blue: 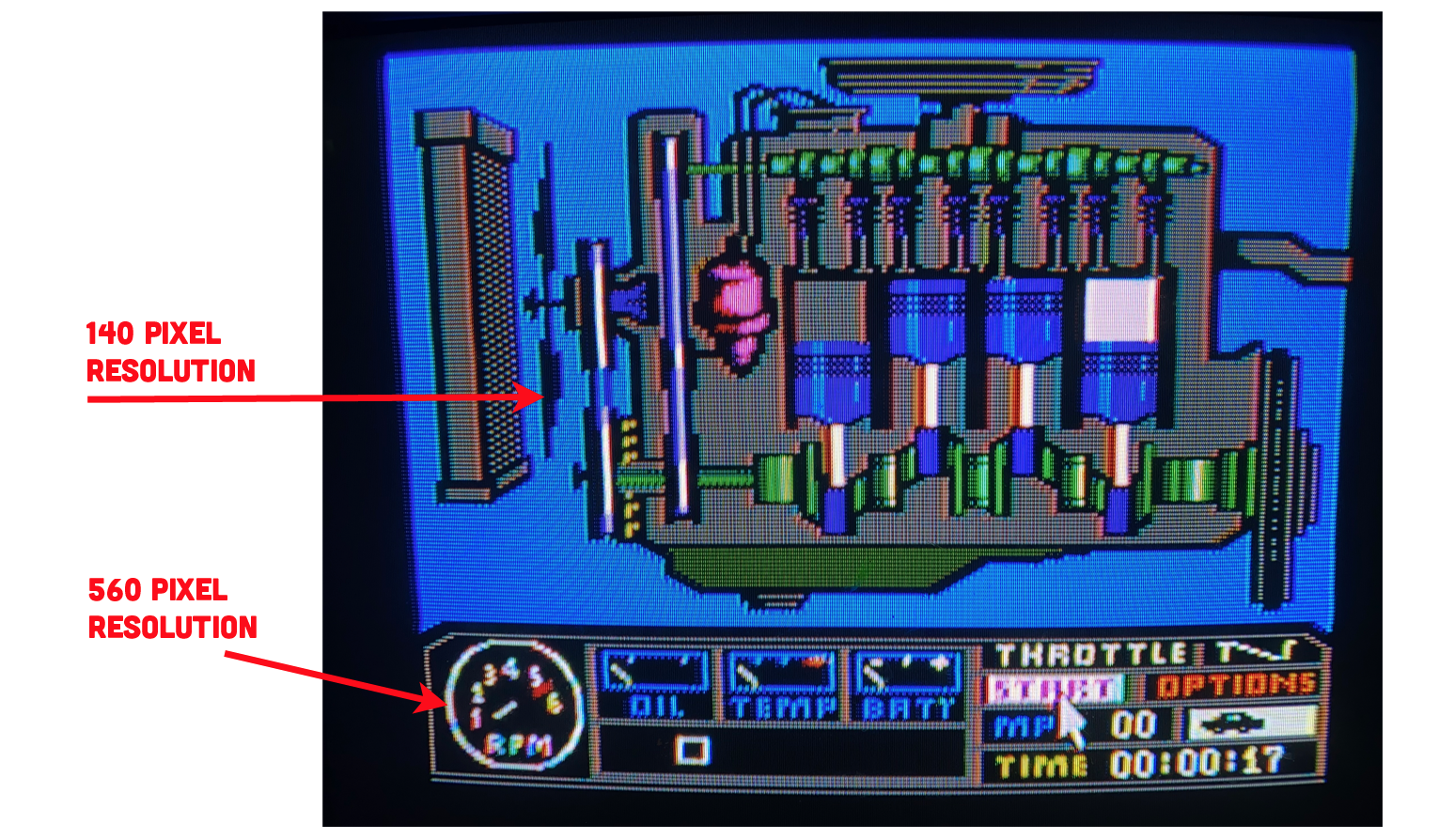 See how much finer the resolution is there, the smoothness of that curve? Hot damn. A discussion of Apple II graphics weirdness and quirks is not really why you’re likely here, but trust me when I say that Karen there did a fantastic job with these graphics, and I hope she knows I appreciate the work that went into it. Also, note I was using a real composite CRT monitor for these images and a real Apple //c computer, because emulators do not get these sorts of graphics right. Just trust me on this one. 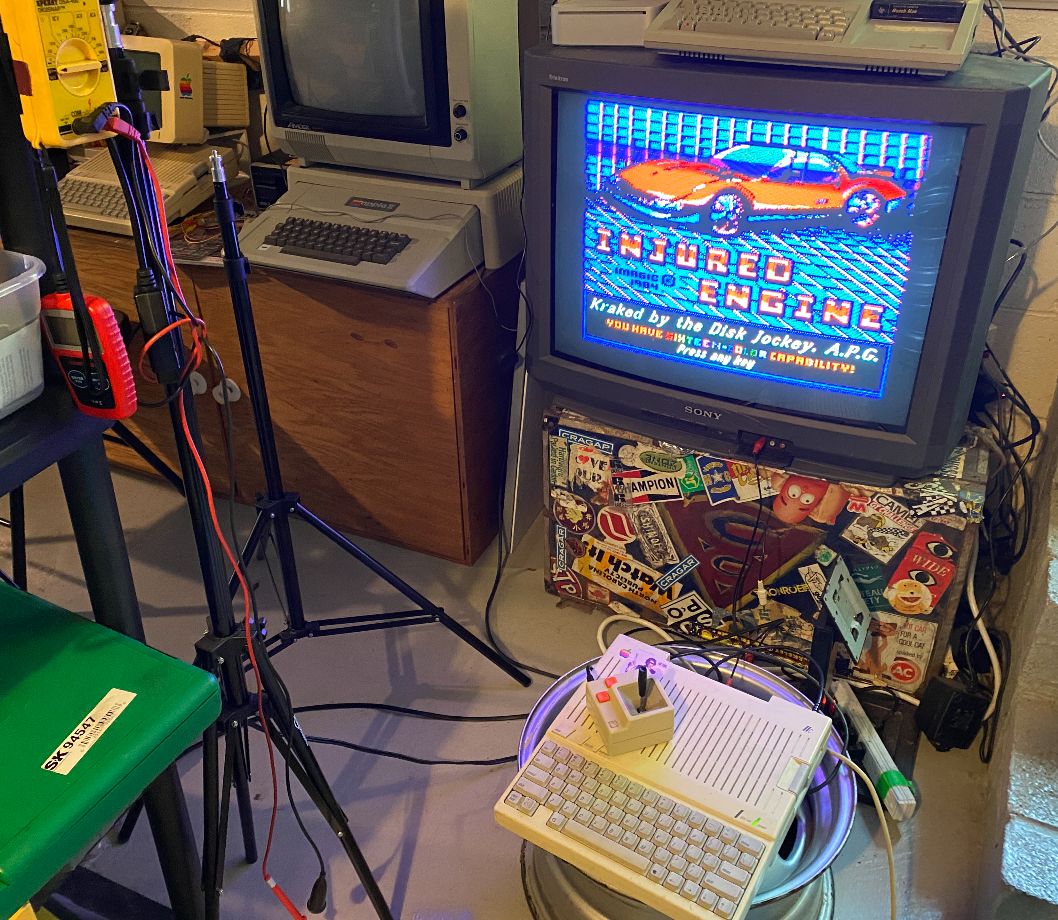 Anyway, back to what this “game” actually is: it’s an engine diagnostics training simulator, really, just presented as a sort of puzzle game. The premise is that you’re a mechanic, and someone has brought their car into your shop. 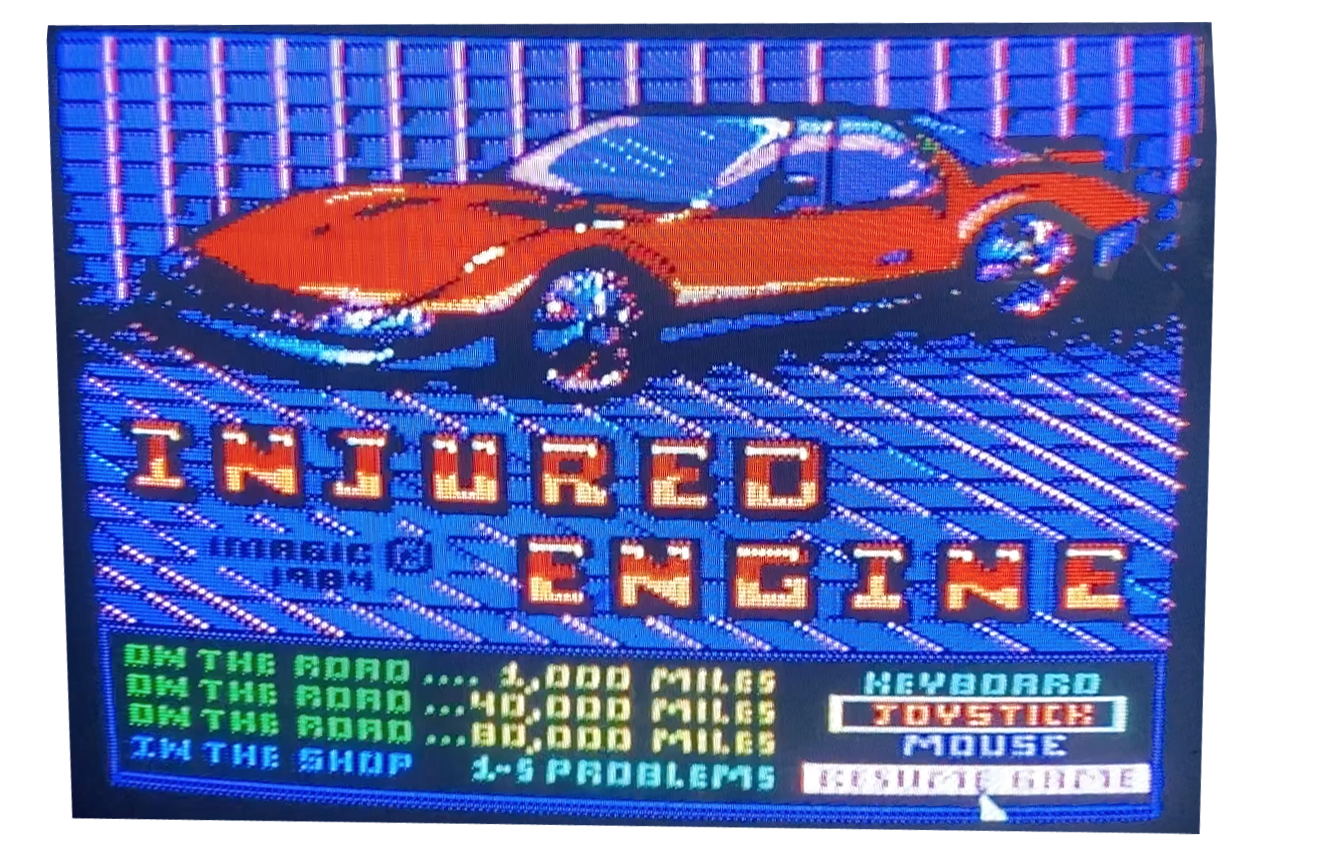 You can pick if the car is on the road with 1,000, 40,000 or 80,000 miles, or if it’s come into your shop with some number of problems. The engine is always a simple inline-four with a carburetor –remember, in 1984, fuel injection was still not as universal as it is now! And, no, I haven’t quite figured out what that car in the title screen is supposed to be, but it doesn’t really seem like something that would have a little inline-four.

You can start the engine and see what it does, complete with crude sound effects, and then you basically try to figure out what’s wrong, using the same kind of processes of elimination you’d use on any car that you were trying to figure out why it wasn’t running.

It can be challenging! Here’a a little snippet of gameplay:

Sometimes I’ve been able to figure out the issue pretty quickly, but, as you can see, not this time. It’s not exactly detailed, but it does encourage you to think diagnostically: what’s the engine not getting? Spark, fuel, air? What’s keeping it from idling?

Each subsystem that you pick to investigate has its own screen, and there’s an impressive amount of detail, at least when you consider all of this had to fit on one 143K diskette. 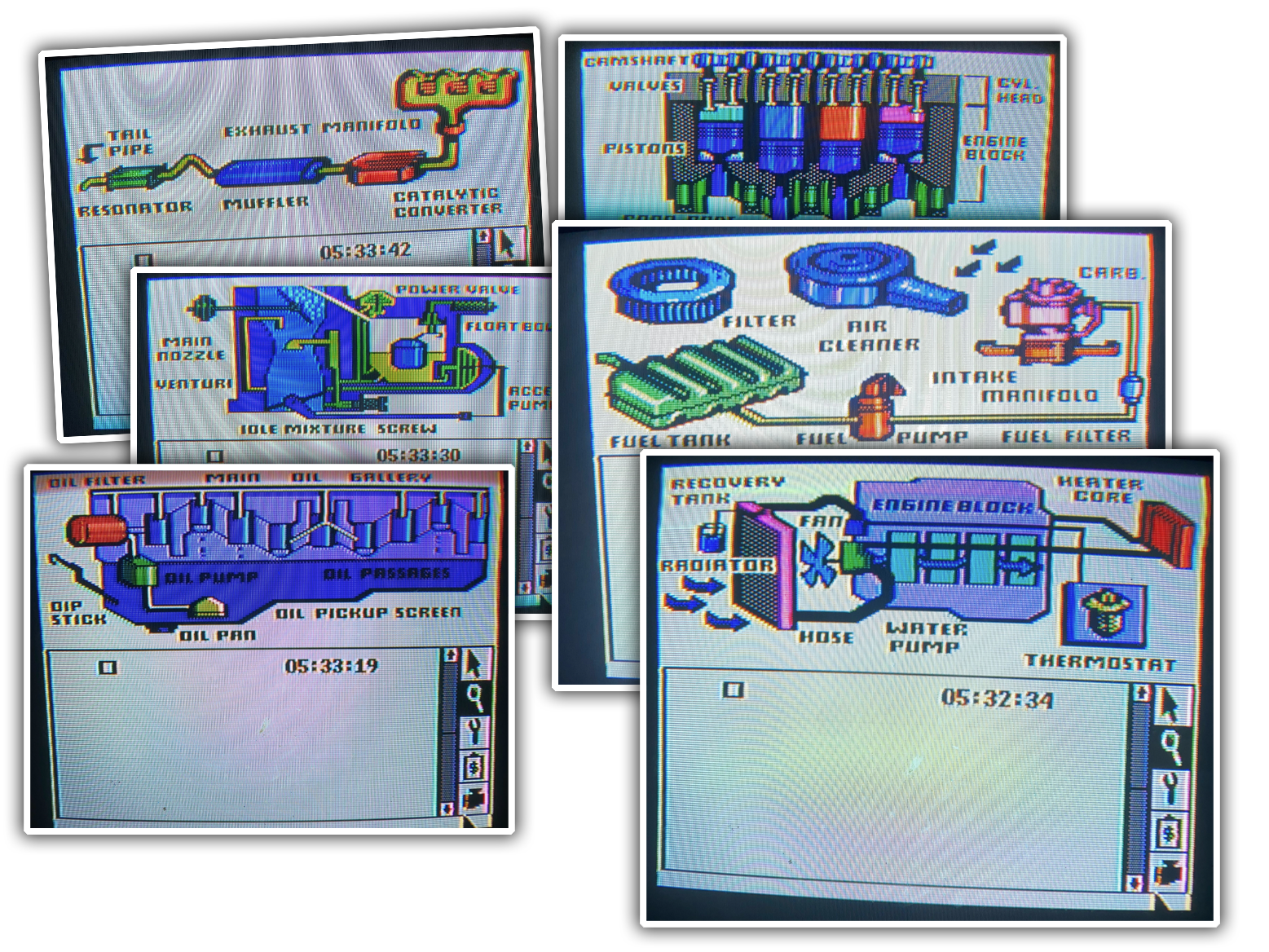 There’s also explainers for everything, which makes for a great little tutorial of what all the greasy things under your hood actually do and what they’re called.

It’s also set up with a timer and monetary tally in many cases, so it encourages good mechanic habits like checking simple things first so you don’t blow a lot of time and money down a fruitless path. It’s simple and strangely engaging, and it’s not a bad way to learn the fundamentals of how engines work.

If you look at modern engine diagnostic training simulation software, it’s very easy to see how much Injured Engine feels like the ancestor to these sophisticated tools:

Injured Engine got pretty decent reviews back in the day, but overall I don’t think most mass-market computer-game buyers knew quite what to do with it. It seems that in addition to the Apple and Commodore versions, IBM PC and Atari versions were planned, but didn’t seem to happen, I suspect because of slow sales, and a downturn in the video game market in general around that time.

Thanks to the magic of modernity, you can try Injured Engine online, thanks to the Internet Archive’s in-browser emulator.

This game is a fascinating artifact of the intersection of video games and automobiles, and while it’s not going to make you an expert mechanic at all, I bet it’ll help you think through diagnostic problems the next time you’re stuck trying to figure out why the hell your car won’t crank over.

Plus, it’ll give me a reason to bore you to tears talking about Apple II graphics the next time we meet. Oh, will you be sorry.

I'm a co-founder of the Autopian, the site you're on RIGHT NOW! I'm here to talk to you about taillights until you cry and beg me to stop, which I absolutely will not. Sorry. Hug? Also, David's friend.
Read All My Posts »
PrevPreviousThis Optical Illusion Of A Yawning Chasm In A Tunnel Messes With A Driver’s Head Just Like It’ll Mess With Yours
NextHere’s How Mazda Packed An Entire Car, Turn Signals And All, Into A SuitcaseNext