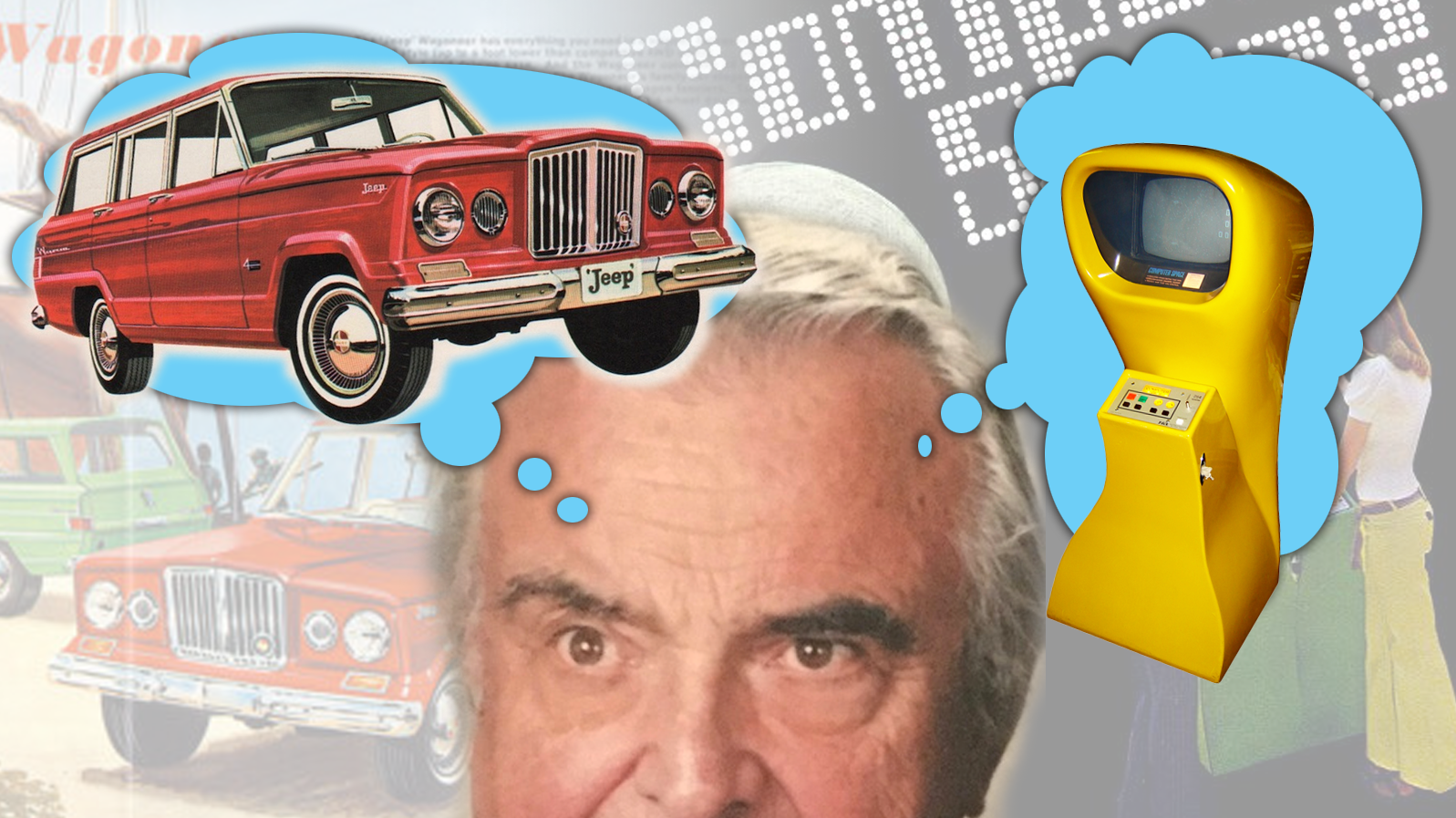 You know what I love? Of course you do, it’s not like I’m hiding any of that shit. But you know what else I love? Strange, unexpected connections, especially when they combine two disparate areas of interest of mine. And boy do I have a good one for you today: the creative force behind both the classic Jeep Wagoneer and the start of arcade video games is the same person. Yes, one man’s wet, pulsating brain gave the world the Jeep Wagoneer and the very first true arcade video game. That man is David Nutting, and it’s time to know about him.

David Judd Nutting (1930-2020) was an industrial designer, but one with an unusual aptitude for a lot more than just the visual look of things; he was a designer and an engineer, one of those rare people who somehow manage to meld both hemispheres of that typical left brain/right brain divide (even if it’s a myth or whatever).

Nutting’s career started when he worked for Brooks Stevens Associates, a company whose name you may be familiar with, as Brooks Stevens is an absolutely legendary automotive designer, styling cars as wildly-varied as the Studebaker Gran Turismo Hawk, the Willys Station Wagon, the Volkswagen Type 4, and — perhaps most significantly — the Oscar Mayer Wienermobile.

He’s also usually given credit for designing the Jeep Wagoneer, but the real source of that inspiration came from a member of Steven’s design team working on commission for Kaiser-Willys — the owners of the Jeep brand in the late 1950s — and that real source is our man, David Nutting.

According to Chip Miller, who runs the Wagonmaster Jeep Wagoneer enthusiast website, he had a conversation with Nutting in 2012 where Nutting explained his involvement with what would become the Wagoneer:

“As David told me in a phone conversation from Arizona, the team returned home and immediately set about working on sketches. Nutting was a bit of a loner within this group of talented designers and immediately began to work on his own, while the others sort of collaborated and worked on a design in team fashion. With Toledo [Where Kaiser-Willys were HQ’d — Ed] breathing down their necks, Mr. Stevens called a meeting a couple of days later to get a look at their progress.

What he found were two distinctly different ideas and concepts were forming. While the “A” Team’s renderings clearly resembled a low-slung Ford Station Wagon with a funky-looking ‘Jeep’ grill, Nutting’s drawings took the new station wagon in a whole different direction.

His stretches resembled something of a pickup/wagon hybrid with a unique new grill. Each side clamored loudly for their new design strategy to be given to K-W as the solution for the Jeep company, and after some consideration, Brooks settled it by telling both Nutting, and the consortium, to finish up their respective design work and they would present both design books to Mr. Kaiser. And let HIM make the decision. Mr. Kaiser decided with little fanfare, but much to the excitement of a young David Nutting, with the ‘Wagoneer’ look that went on to be built the following year, 1962, for the 1963 model year.”

So, let’s take a moment here and really spell out exactly what Nutting did, and why it’s so significant. The design brief was essentially asking for a Jeep-branded station wagon, and while that’s what some of the designers were creating, Nutting’s revelation was to take what Jeep was best at building — 4×4, truck-like chassis — and drop on a more luxurious, generally wagon-shaped body but with taller, more truck-like proportions.

What nutting had invented there is something that has essentially become the dominant automotive life-form today, over half a century later: the SUV. Back in the late ’50s and early ’60s, 4×4 vehicles were rugged, utilitarian beasts, not the sort of thing you’d buy to haul your family around in, unless your family is a couple of German Shepherds and a few bags of gravel.

Nutting changed all that with the Wagoneer, a well-appointed and comfortable station wagon wearing big hiking boots, able to roll with elegance to a dinner party or splash through a stream and up a rocky hill.

There are some great pictures of early Wagoneer prototypes next to the old Stevens-designed Willys Station Wagon, and you can really see how radically different Nutting’s idea was: 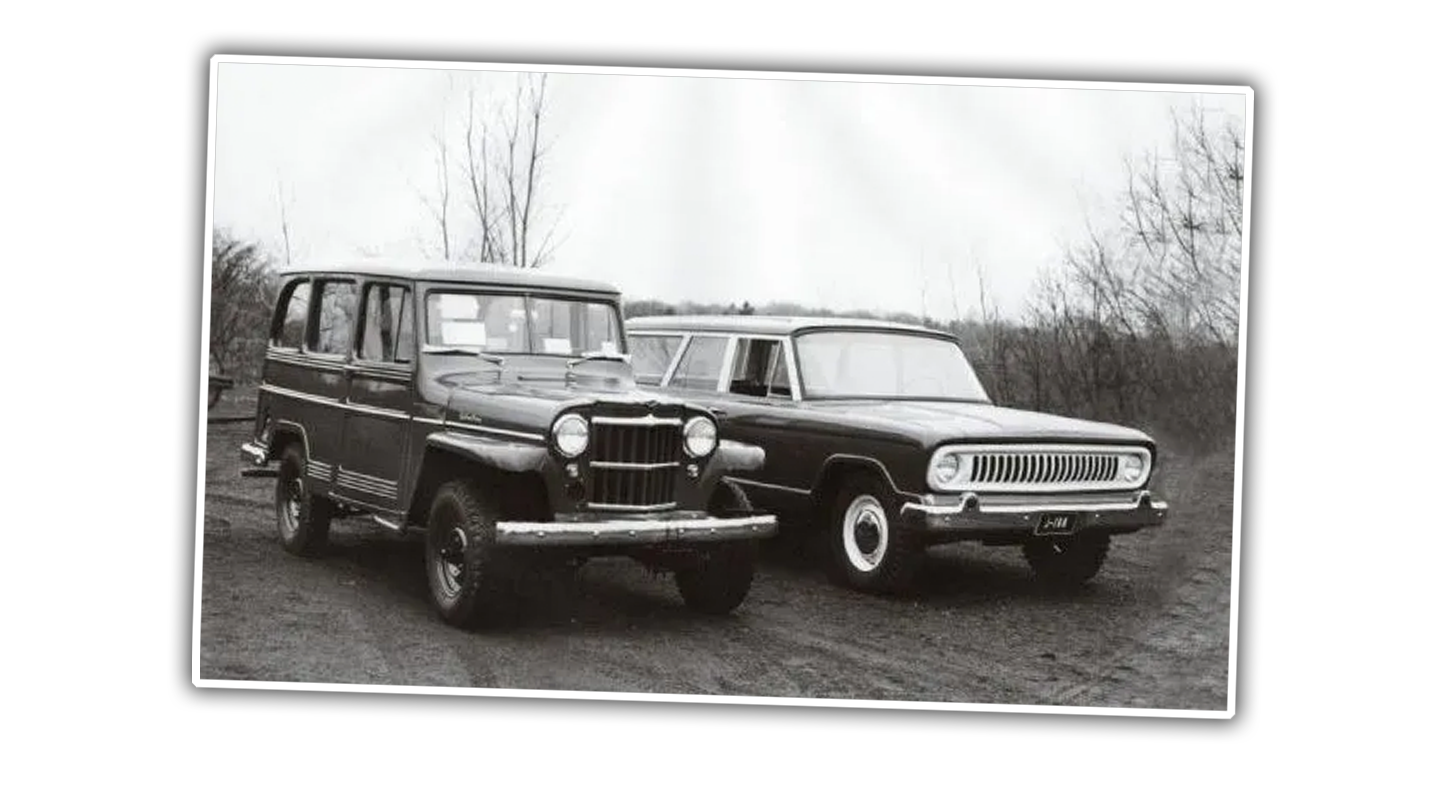 Look at that: same ride height, off-road wheels and tires, same high ground clearance, but one looks like a contemporary (for 1959, when this photo was taken) station wagon and one looks like a rugged, archaic Jeep. 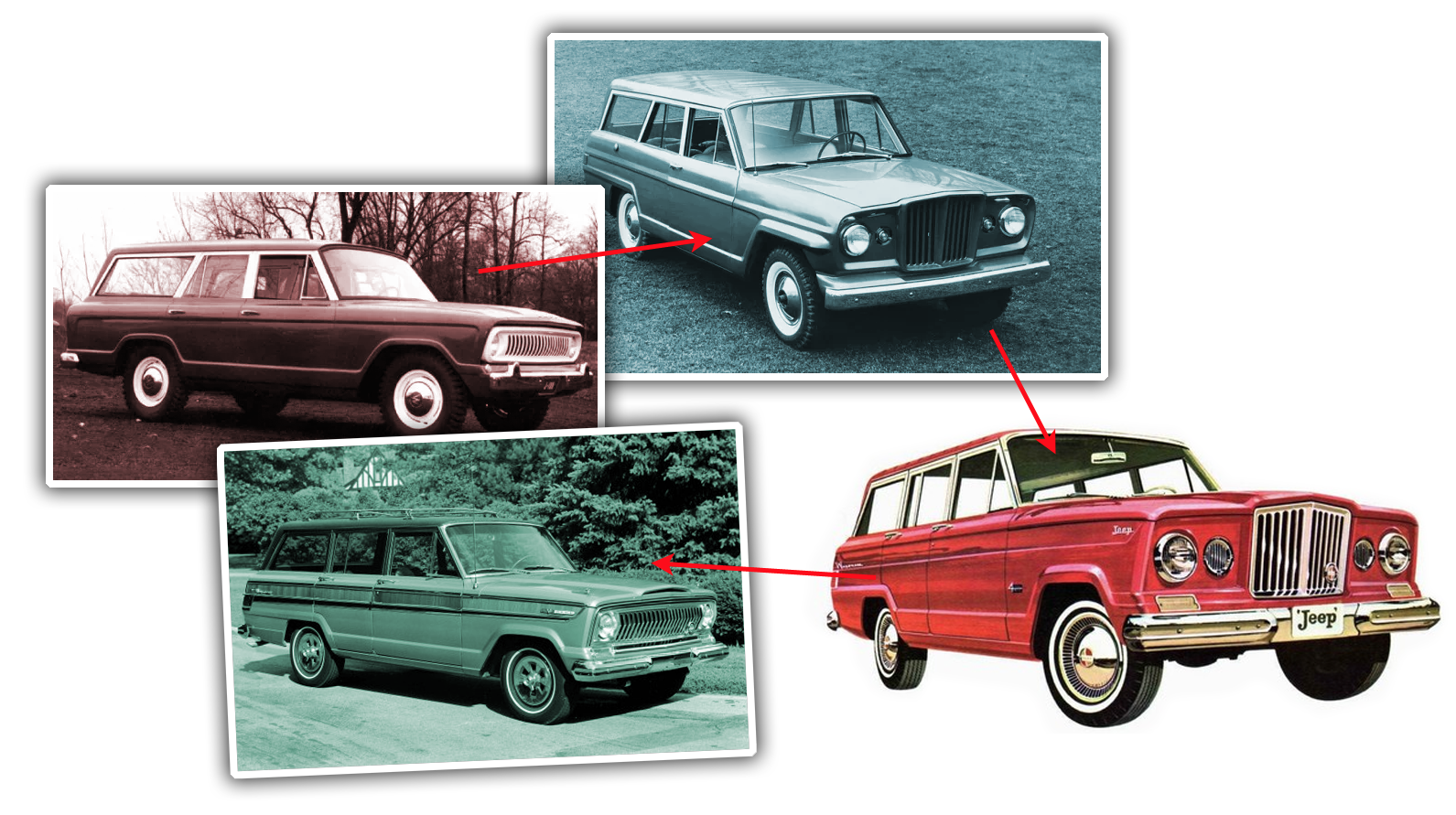 Interestingly, that front end design of the 1959 “Malibu” Wagoneer prototype, with its low, wide grille, didn’t make it to production, in favor of the tall, narrow grille you can see on the first production 1963 Wagoneer in red there. That wide grille wasn’t ready to go away, though, because in 1966 it re-appeared as the more-upscale Super Wagoneer.

The big point here is that it was Nutting’s idea that launched this entirely new automotive segment — the tall, potentially off-road-capable wagon-like vehicle with plenty of amenities and style that launched SUVs, and that original Wagoneer design ended up sticking around all the way into the early 1990s. It’s amazing.

But I suppose Nutting wasn’t satisfied sparking a whole new market segment in just one measly industry, he also had to go ahead and pretty much pioneer the start of a second all-new industry. This time it was games, at first electromechanical, and then video/computerized.

In 1967, Nutting entered the coin-operated amusements and games industry with a machine called I.Q. Computer, designed by his brother David. It wasn’t really a computer, but rather an electromechanical machine that used film displays and mechanical logic to quiz and score players. 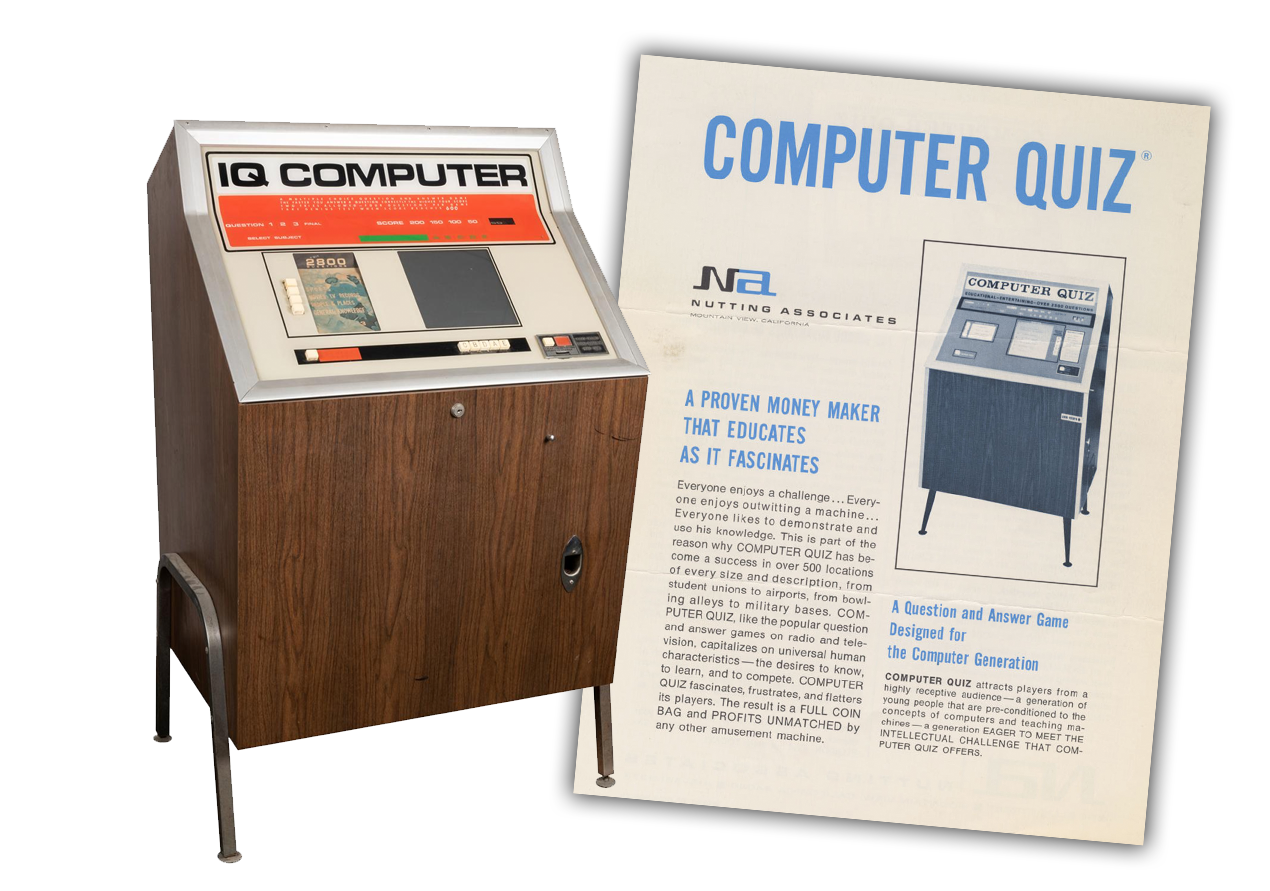 Nutting founded Nutting Associates to build these and other later versions and other electromechanical arcade games, then later branched out into making computer control systems for pinball machines when the first microprocessor, the Intel 4004, arrived in 1971.

While Nutting had the general concept that computers could be used in a coin-op game context as far back as 1967–even if those early machines weren’t true computers–he needed a partner to take that idea even further. He found that partner in Nolan Bushnell, the man who would later go on to found Atari, the early video game pioneering company.

Bushnell and his partner Ted Dabney had started a company called Syzgy Engineering with the intent of adapting the mainframe computer game Spacewar into a coin-op context. Space War was only playable to people who had access to large mainframe or minicomputers like the Digital Equipment PDP-1 — which is another way of saying almost nobody, save for some computer science students and determined geeks in colleges and universities.

Normal people simply did not encounter these machines in their daily lives. But, normal people did encounter plenty of quarters, and Bushnell and Dabney realized that perhaps, with some clever engineering, they could trade those quarters for a chance to play a game like Spacewar.

A “real” computer would be far too expensive to use to play any game that would have wide distribution; a cheaper solution was needed. With that in mind, Bushnell and Dabney essentially re-created a computer game without a literal general-use computer, instead creating a solution that used discrete electronic hardware to play the game as a dedicated machine, using a modified black-and-white television set for the output.

So how does Nutting, our man behind the Wagoneer fit in? Well, Bushnell was complaining to his dentist about trying to find a partner to finish engineering and manufacturing his game; this well-connected dentist mentioned another patient of his, Dave Nutting, and put the two together.

Nutting’s company saw the potential for coin-operated computer/video games immediately, and agreed to manufacture the game, now called Computer Space (to fit with the existing Nutting lineup of games like Computer Quiz). He also agreed to hire Bushnell as the company’s chief engineer. 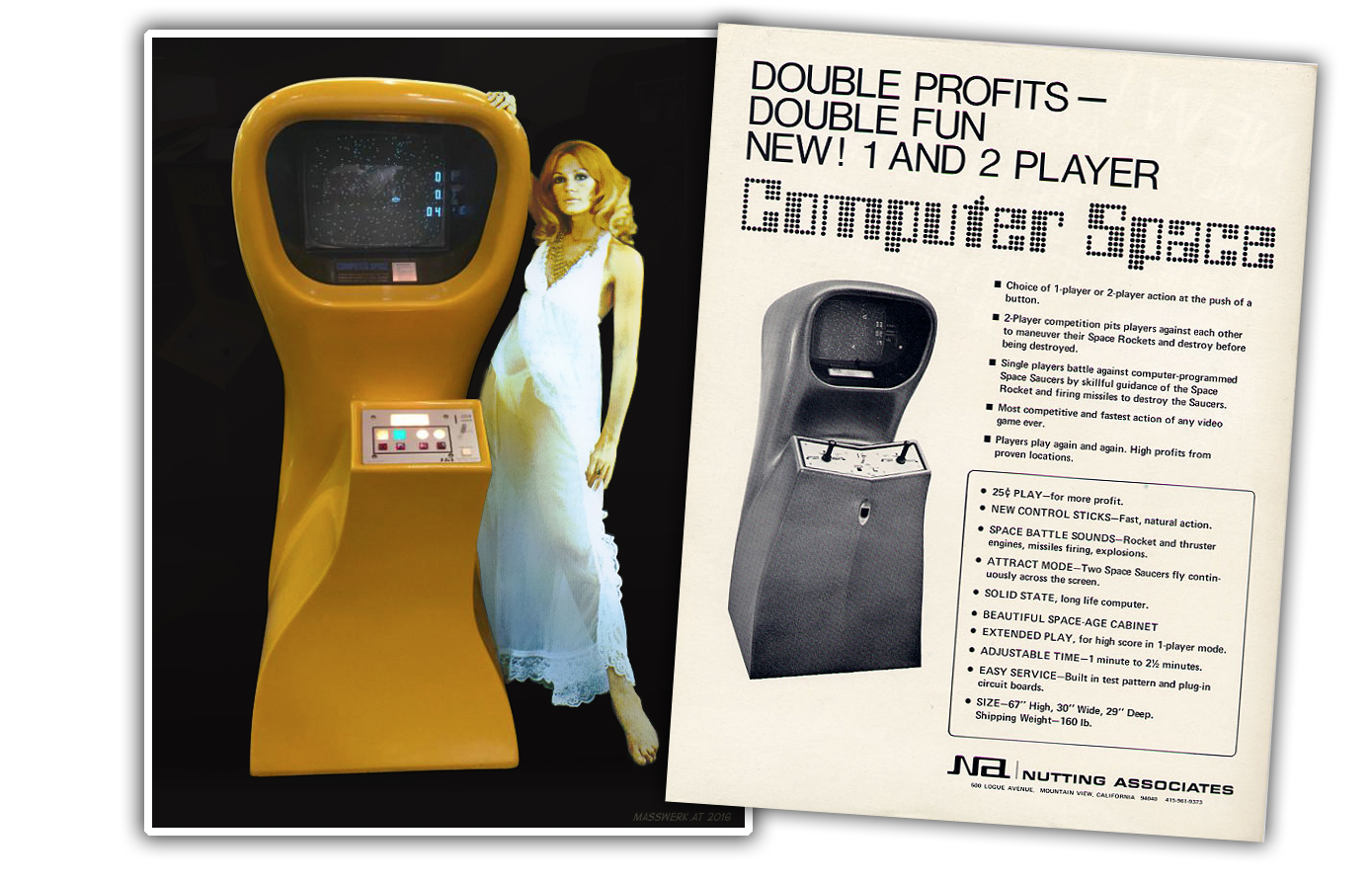 Eventually, Bushnell finished the engineering of Computer Space, and an amazing metal-flake fiberglass cabinet was designed to house the hardware. Nutting sold the game, and a later two-player sequel. They were just a bit too complex for most of the partially-drunk players who encountered them at bars or amusement centers, so they didn’t really sell all that well (though, to be fair, sales weren’t bad, either). Still, Computer Space was the first true arcade video game, and did make a cultural impact, showing up as a futuristic plot in movies like Soylent Green (spoiler: it’s people):

There are some good views of the gameplay there, too. Oh hey–want to know a very cool detail about Computer Space? The dot patterns for the rocket and flying saucer were stored in electronic components known as diodes, and while you don’t need to understand just how that works, you can appreciate how the visual layout of those components on the board correspond to how the rocket, for example, appears on screen: 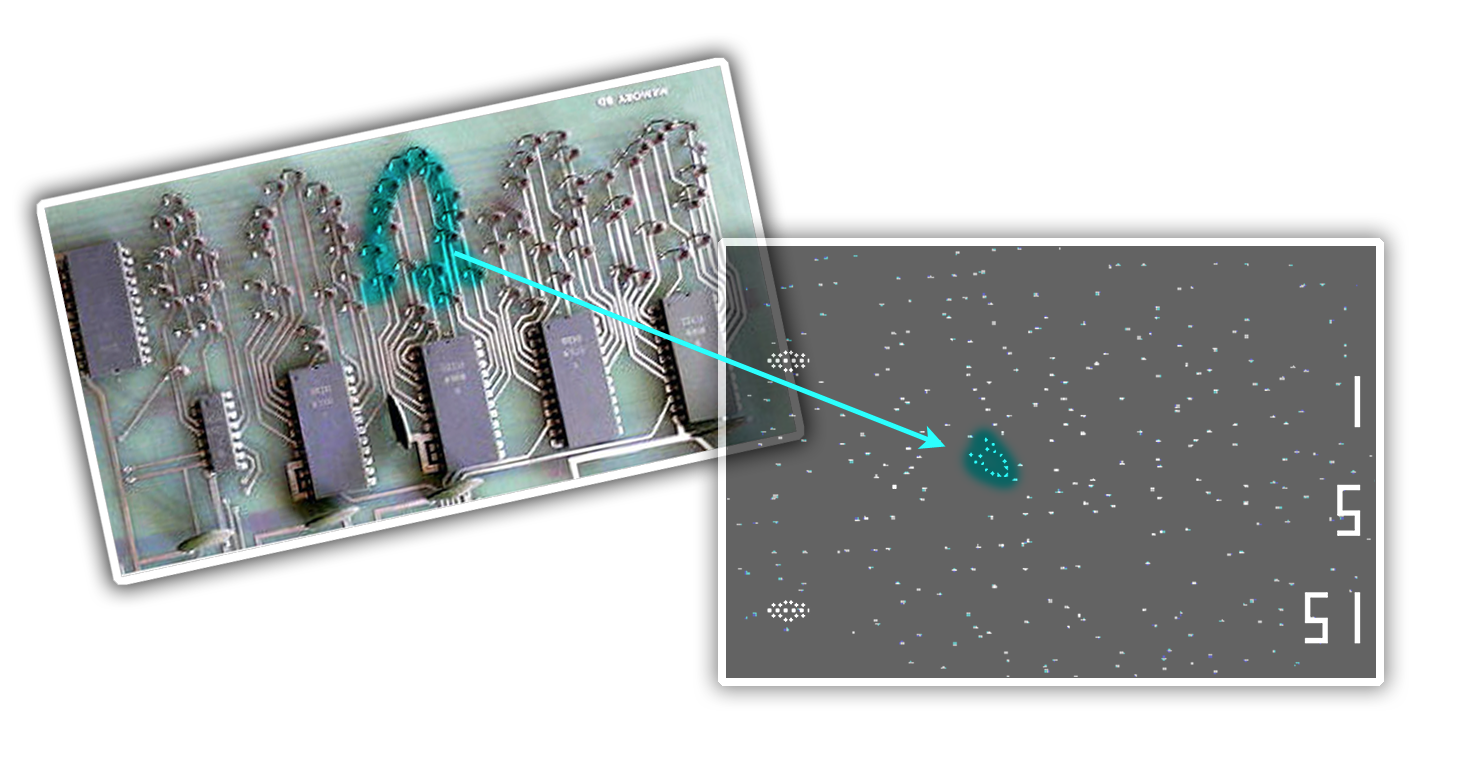 Cool, right? I love that.

Anyway, eventually Bushnell left to found Atari, which created the much simpler video game Pong and started that whole industry. Nutting continued with video games after Computer Space, hiring video game pioneer Jamie Fenton to develop video games for Bally/Midway, including such legendary games as Gorf, Wizard of Wor, and engineering the Bally Home Arcade system (one of which I actually have!)

Let’s just take a moment to recap here, then. Our man, David Nutting had the idea for what would become the Jeep Wagoneer and what would subsequently sparked the whole category of SUVs, and then later he was instrumental in producing the world’s first actual coin-operated video game, kicking off another industry.

That’s pretty amazing. So, the next time you drive to an arcade in a Jeep Wagoneer, take a moment to marvel at the fact that you only have to thank one man for both of those very different joys. That man is Dave Nutting.

CORRECTION/UPDATE: Sadly, I seem to have conflated my Nuttings a bit; it seems that it was Dave’s brother Bill who actually was the one who hired Nolan Bushnell, so Bill Nutting really should get the credit for Computer Space. However, Dave did found Dave Nutting Associates in 1974, and worked with Bally to develop microprocessor pinball machines and video games, as the article up there states.

Dave’s company did make the video game Gunfight for Midway, which was the first microprocessor (8080)-based video game, and that was very much the template for nearly all video games to follow. So, even if his brother gets the credit for hiring Bushnell, Dave is absolutely still a video game pioneer.

There’s a great video about all of Dave Nutting’s video game achievements that you can see here:

I'm a co-founder of the Autopian, the site you're on RIGHT NOW! I'm here to talk to you about taillights until you cry and beg me to stop, which I absolutely will not. Sorry. Hug? Also, David's friend.
Read All My Posts »
PrevPreviousThis Is How A Car Designer Would Make A Modern Classic British Roadster
NextThe 2023 Acura Integra That You Want Is Too ExpensiveNext