Judging by the number of comments and the great conversations we had below the line, you all enjoyed our redesigning the “All-American Wagon as an EV” articles. Well, because I’m nothing if not a glutton for punishment, we’re at it again.

Now, being the resident Brit around these parts, I feel a certain obligation to, as Her Majesty’s best known secret agent might quip, “keep the British end up.” Now I know we’ve had our differences in the past. You colonials tried to make tea by chucking crates of it in Boston harbor and we set fire to the White House. But that’s all behind us now right? I don’t drink tea anyway. Being an arty designer type I prefer coffee.

America’s greatest contribution to civilized society? Coffee machines in gas stations. Anyway, the point is that we’re best friends now, as evidenced by the fact that that America took the majority of British sports car exports in the fifties and sixties, before our car industry imploded in turmoil and nationalization in the seventies. 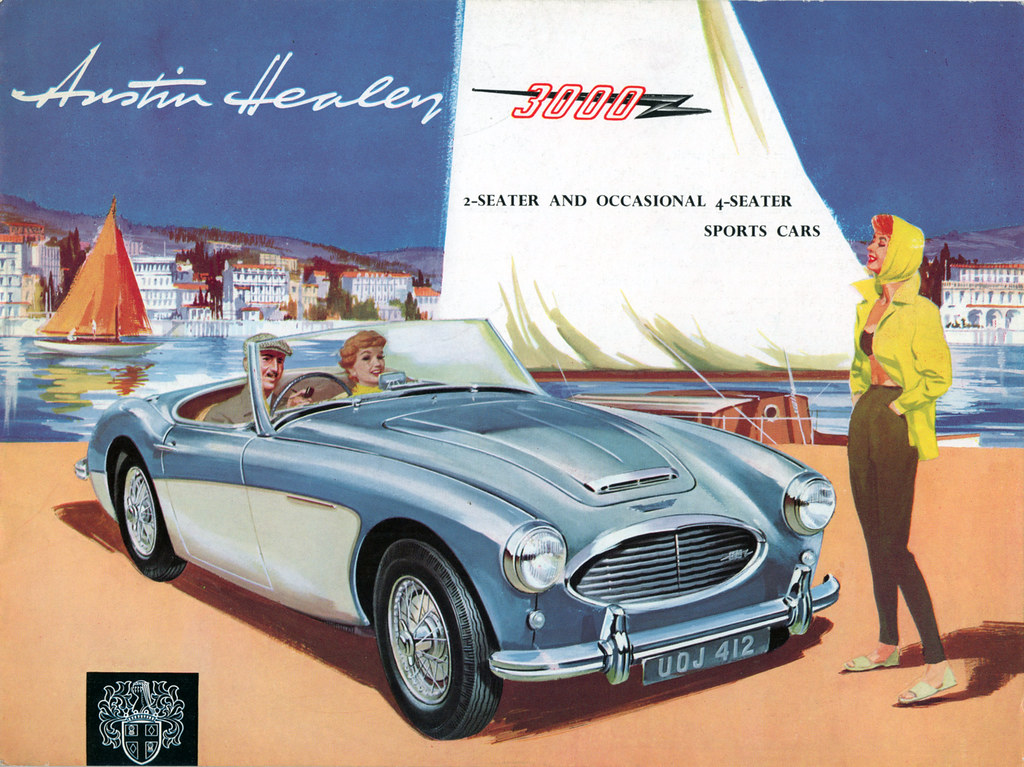 As a result of all that, when BMW bought the Rover Group, it ended up with a variety of defunct British brands, some of which the Bavarian automaker still owns. Although Jaguar and Land Rover ended up at Ford before being sold to Tata, BMW kept MINI and also Triumph and Austin Healey. Which is where we come in. I’ve often thought these were ripe for resurrection using BMW platforms and could be sold alongside MINI. And some of you lunatic commenters agree with me.

Mazda may have perfected the smaller four cylinder British roadster by actually building them properly, but the Miata lacks a certain brawny six  cylinder charm don’t you think? It’s a scalpel, not a hammer. Let’s fix that by imagining a new “Big Healey”–an Austin-Healey 3000 roadster–on the platform of the BMW Z4.

The Big Healeys, as they were known, were differentiated from their predecessors by a 2.6 and latterly 3 liter six cylinder engine. They are more British than a deadpan sense of humor in a crisis. What would a modern redo look like? 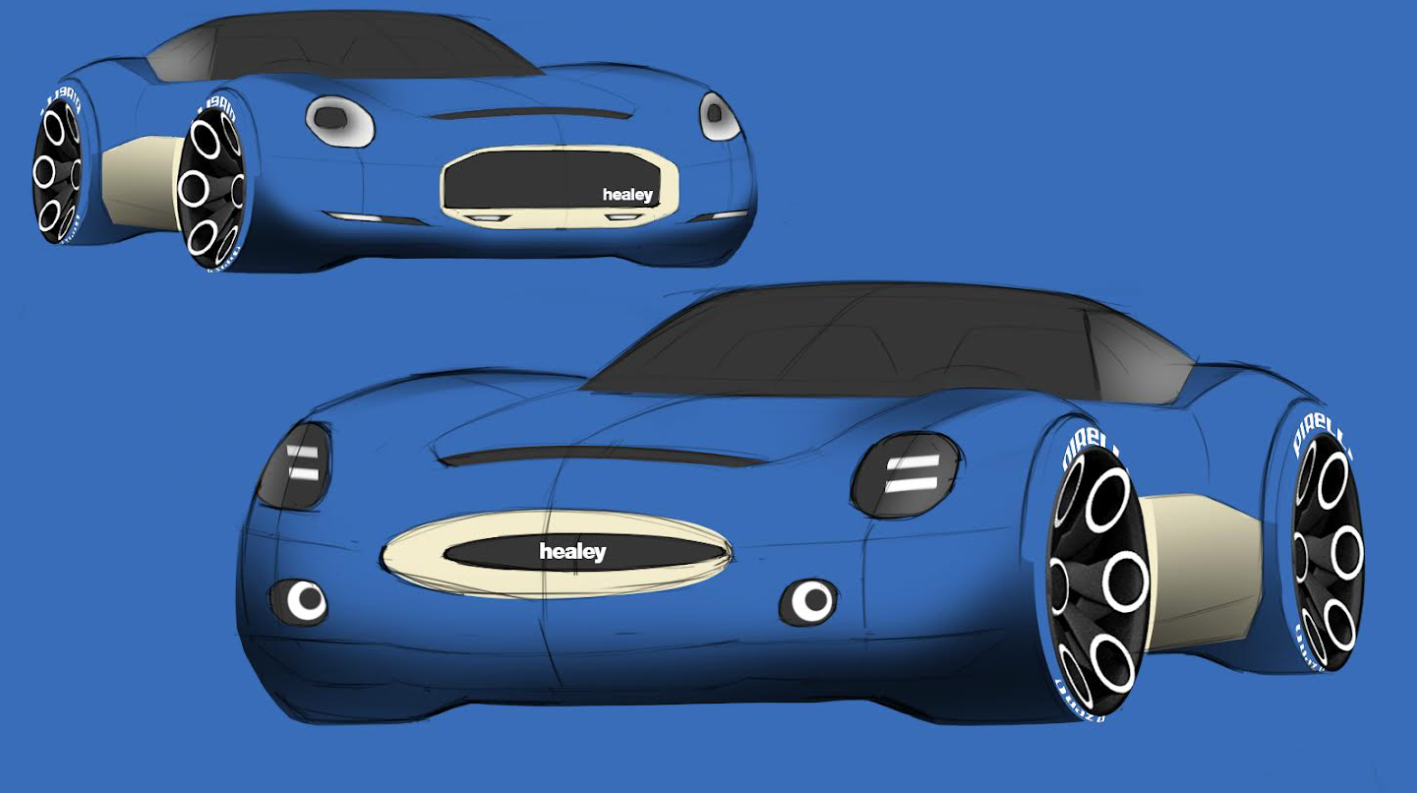 Starting at the front, I’ve tried to capture that classic round headlight look, but updating it with more modern lighting graphics. Healeys were very successful rally cars, so I’ve made sure to add in some auxiliary illumination. The tricky part was trying to avoid the grill shape looking too Jaguar like. The original car had an oval grill shape that doesn’t update easily – one alternative I haven’t sketched would be a filled-in grill with the shape indicated by a shut line. 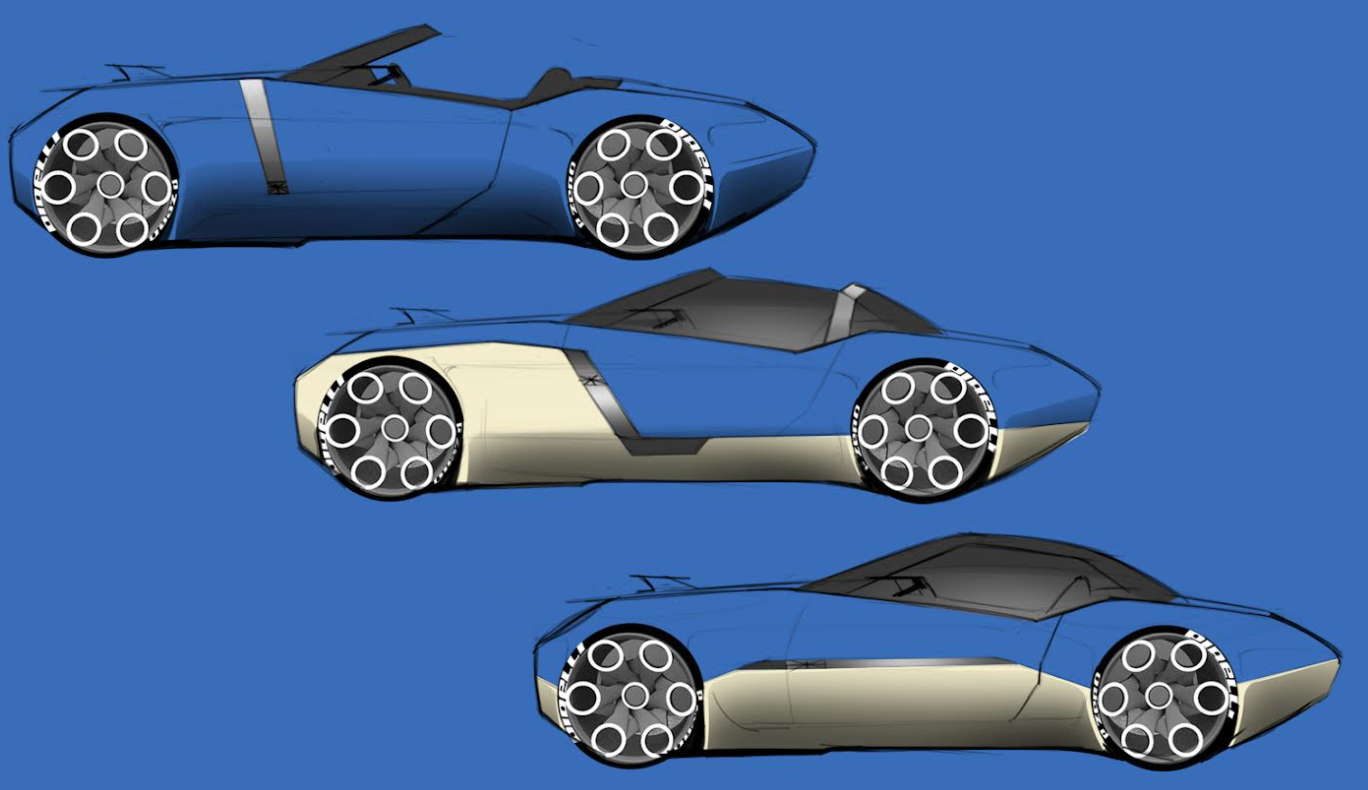 I’ve mentioned before that I normally wouldn’t sketch straight side views, as they can look static. However, in this case they’re necessary because I wanted to show alternative treatments for the two tone paint. One of the defining traits of the Austin Healey is that they taper towards the rear, much like a Citroen DS, which I’ve mimicked in the updated bodywork. The Healey really is a car that is all about that engine. 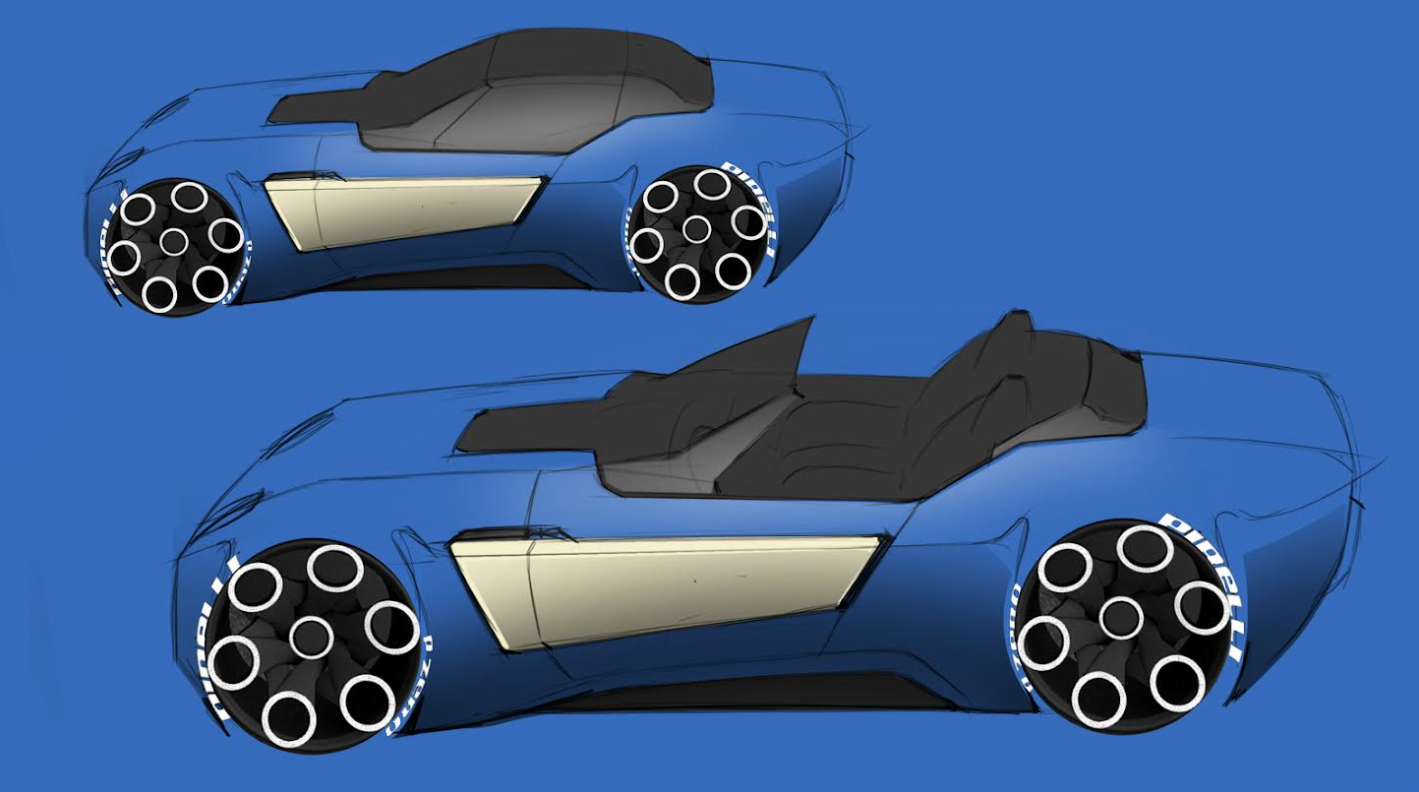 Another characteristic of those classic British roadsters is their cut-down doors. Torch threatened to beat me with a burlap sack full of odd shaped tail lights if I didn’t include this feature. [Editor’s Note: (swings bag of taillights, some sharp) – JT] If this design went forward to the realization stage the challenge would be making sure there is enough room in the door for the glass to drop fully, but I think we’ll be okay because of the low roofline. 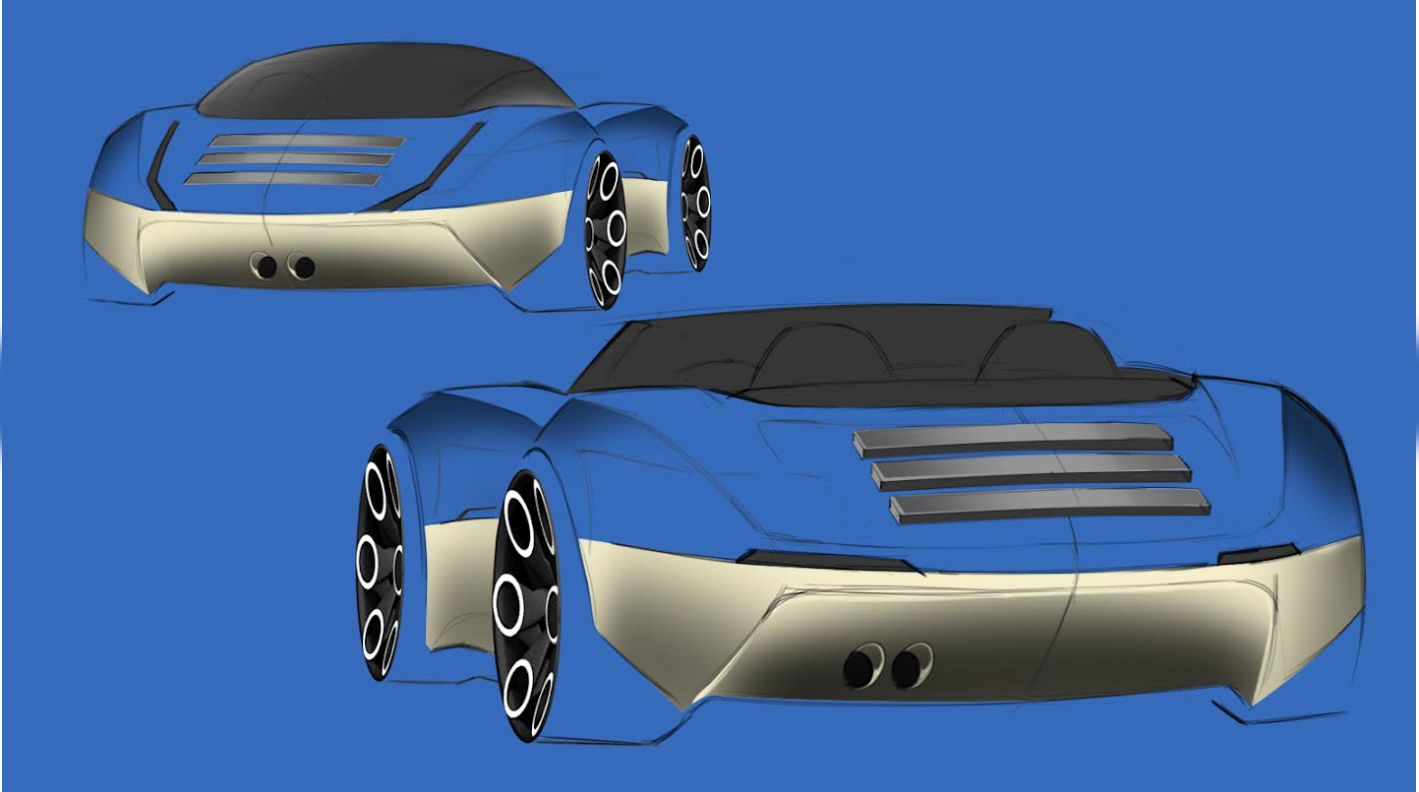 Speaking of the roof, I’m thinking a TVR/Suzuki Cappuccino style lift out center section with a folding rear section. The beauty of the Healey’s long tail proportions means the trunk should easily be large enough to swallow the roof panel.

Nothing says a good time in a roadster like a picnic hamper strapped to the back. But every time I see a Miata with an old fashioned chrome luggage rack mounted on the trunk lid a piece of my car designer soul dies. So our Healey has a pop up rack that lies flush when not in use – and has a much more modern and substantial look.

As before, jump into the comments to give me your thoughts, insights and insults. Remember these thumbnail sketches are as our friend Frank would say “the concept ideation phase.” They’re getting the ideas down on the paper, not the finished concept.

Professional Car Designer and writer about car design. I have a BA in Automotive Design and a Masters in Vehicle Design from the Royal College of Art in London, where J Mays was my tutor. He used to bring in donuts. I was hired from there into a major European OEM. I daily drive a 2011 L320 Range Rover Sport and also own a 1983 Ferrari Mondial QV. I always wear black, love goth music and have way too many books. twitter: @adrianfclarke. Instagram: adrianfclarke
Read All My Posts »
PrevPreviousThe Amount Of Money I Wasted By Using An Electric Heater In My Garage Is Unbelievable
NextThis Man Is The Improbable Link Between The Jeep Wagoneer And The Invention Of Arcade Video GamesNext