January and February were harsh months in Michigan, with temperatures regularly dropping near zero. They also happened to coincide with my decision to swap guts from one broken Jeep to another. Desperate to reduce my vehicle count to something more manageable, I invited my friend Dustin from Wisconsin to help me with the wrenching. It was grueling work, but it wasn’t so cold thanks to my garage’s small electric heater, which, I recently realized, burned away an absolutely absurd amount of my money.

Ever since I began writing about cars in 2015, I’ve taken pride in admitting my mistakes. They are oftentimes deeply foolish and embarrassing, but I have no shame, so why not share my idiocy with you, dear readers? If reading this spares even one of you the financial ruin I just suffered, then my mission is accomplished. 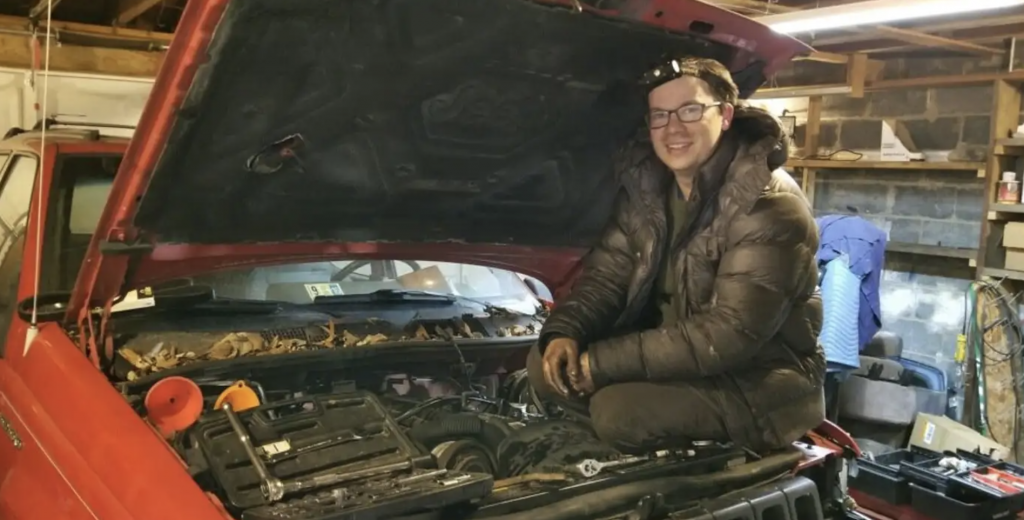 The image above shows me sitting on a rare 1994 Jeep Grand Cherokee five-speed that I bought for $350. Unfortunately, the Jeep was missing its most important attribute: the stick shift. Luckily, my friend Dustin from Wisconsin had sold me his rusted-out manual ZJ for just $350 delivered, so I had donor parts ready to revive the red Jeep.

For three days straight, Dustin and I toiled. We had to tow both broken Jeeps into the garage, remove a transmission and transfer case, gut an entire interior, and deal with far too many rusty parts to even mention. (I documented our struggles in an article on Jalopnik a few months back). Since it was so cold outside — and since my landlord had asked me to make sure the pipes in the poorly-insulated garage don’t freeze — I had an electric heater turned on in the corner: 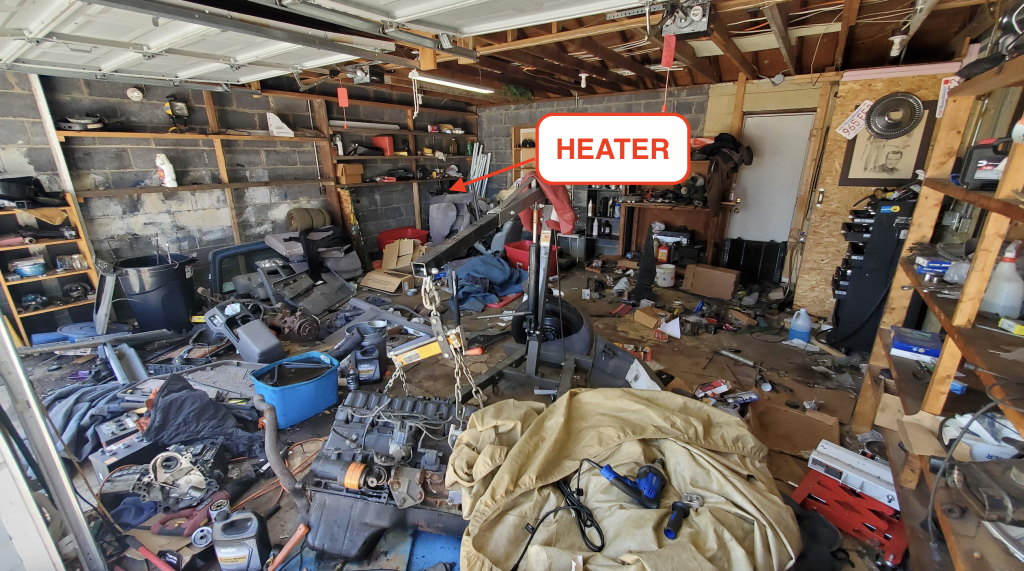 It’s tiny and doesn’t really shoot out a ton of heat, but it gets the garage to a comfortable 45 to 50ish degrees. Throw on a jacket, spin a few wrenches, and it’s enough to help me break a sweat.

I Wasted A Grand Because I’m A Fool 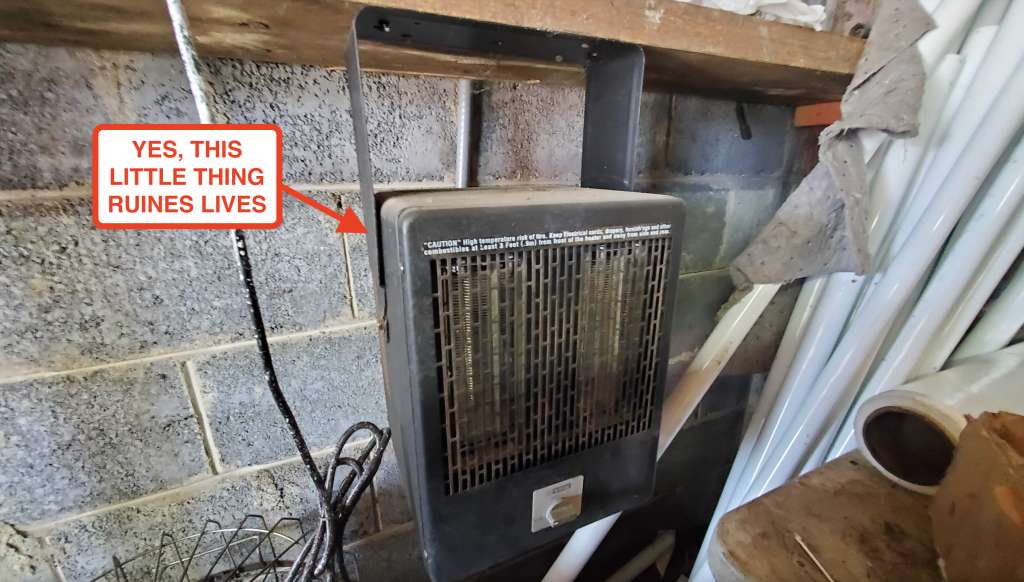 After Dustin and I had swapped the green Jeep’s transmission into the red Jeep, he headed back to Wisconsin, and I continued toiling on The Cheapest Car In America In 2009 (a cheap Nissan Versa) before driving the thing all the way down to Arkansas. From Arkansas I flew to LA for work, and a few days later I returned home and continued work on The Autopian, banging away on my keyboard all day for weeks.

One day, during a lunch break, I checked my bank account and saw an enormous withdrawal from my energy company. “What in the actual hell?” I thought. “I’ll look into this later.” The following day, I received this bill from my energy provider:

My heart began racing as I tried avoiding thinking about how many Jeep 4.0-liter engines I could buy for that amount. I logged into my DTE Energy account to look at my other bills, and that’s when I found the previous month’s statement, which I had somehow overlooked:

That’s $1,182 for two months of electricity. I could literally buy eight used Jeep 4.0-liter engisfiewiodaiosfbasfbas [sorry, I fainted on my keyboard there for a sec].

To put this into context, the U.S. government’s “Energy Information Administration” lists the average monthly residential energy bill in Michigan as $109.86. And since I’m just a single dude living in a small shack, I’d guess that my bill should have been about $200 for two months, meaning my dumb ass wasted nearly a thousand dollars over over that span. One thousand dollars. 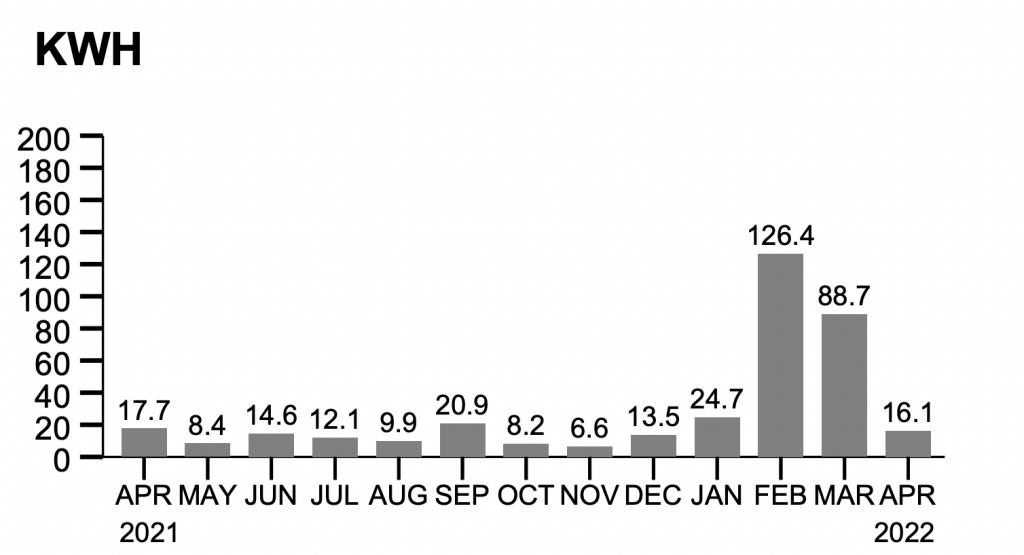 To understand what the heck happened, I looked at my energy usage, and saw that it spiked in February and March. Yes, you might expect to see a higher energy bill during these dark, cold months, but definitely not a 15-fold increase over a fall month (you can see that my average daily energy use jumped to 126.4 kWh; typically I use about 10 to 20 kWh).

Upon seeing this plot, I remembered my heater, and I sprinted as fast as I could to my garage to shut the damn thing off, as it was still blowing somewhat-warm air. Then I called up my energy company to better understand if this was indeed the cause of my now-inevitable bankruptcy.

“What I am seeing is a huge increase in usage during those two months,” the representative told me over the phone. “By any chance were you running any space heater or anything of that nature… or any sort of electric heat source?” she said immediately after, at which point I realized that maybe, just maybe, this whole stupid dilemma that I was now in was achingly obvious to most people, and that I was just an absolute cretin.

She then told me that her husband wrenches on cars, and experienced a similar shock when he saw what the electric space in their garage did to their energy bill. “Any sort of electric heat source…it quadruples your energy usage..it’s actually kinda shocking how much energy they use,” she told me, going on to suggest either routing my heater ducts from my house or using a kerosene space heater. 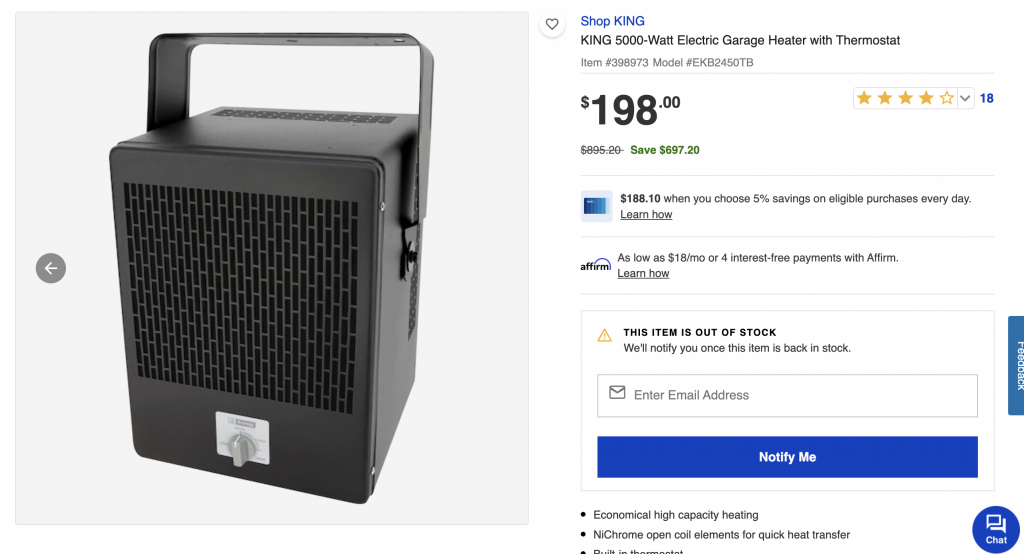 The heater in my garage is the King EKB2450TB, a 5,000 watt unit that runs on 240V of electricity. To convert the power output of that heater (which we’ll assume was going at full-bore: 5,000 watts) to energy, I have to multiply by time (Power = energy/time).

Given that I’m pretty sure the heater was on for the entirety of both billing periods — i.e. from January 12 until March 10 — I’m going to multiply 5,000 by 57 days in that period by 24 hours in each day to get 6.96 million watt hours, or 6,960 kWh. That’s roughly how much energy this heater should have used.

Let’s check this math real quick by looking at my overall energy usage, per my energy company:

This is less than the 6,960 kWh that I just calculated my heater would use, so to understand this better, I dug into my energy data: 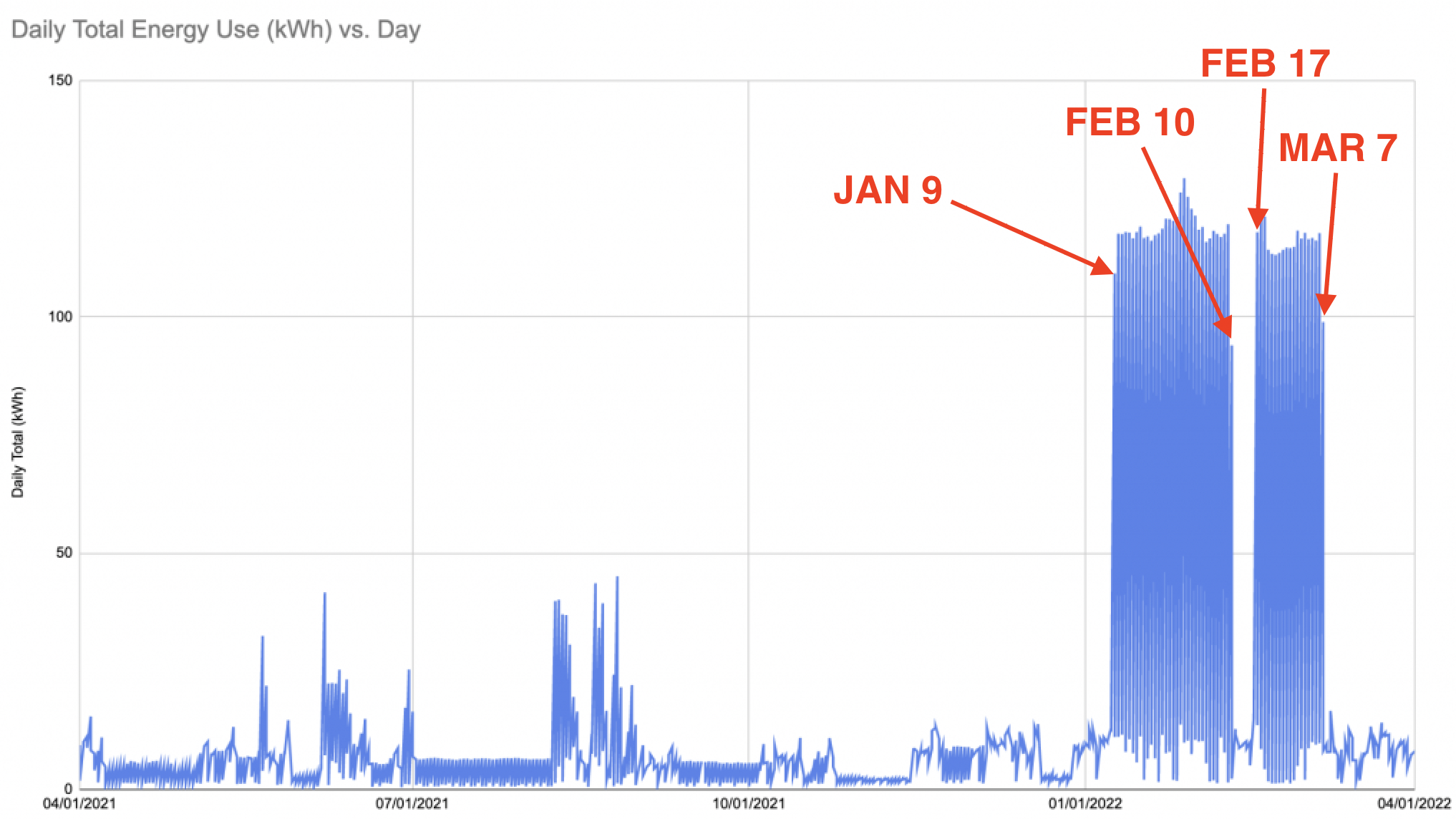 The data shows that the initial spike occurred on January 9. Then on February 10, it took a week long break — that’s the gap you see there between the two peaks. My energy usage spiked back up on February 17 and continued until March 7, when I apparently frantically turned my heater off.

From the start of my billing period, January 12, until February 10 (when I apparently turned the heater off) is a total of 29 days. From the start of the second spike, February 17 until its end, March 7, is 18 days. So the total amount of time my heater was on was probably 47 days.

So if we adjust the calculation I did earlier for my heater’s energy usage, it’s 5,000 watts times 47 days (instead of 57) times 24 hours a day. We end up with 5,640 kWh — that’s roughly how much energy I wasted during those billing periods solely on that heater.

That’s 200 kWh shy of the 5,840 kWh my energy company said I actually used over those billing periods. And as I said earlier, a typical household like mine would use about 100 kWh per month when not being an idiot with a space heater, so the math checks out. Electric space heaters are absolute guzzlers, and I wasted $1,000 to get a lukewarm garage for 47 days.

Natural Gas Is The Way To Heat Up Your Garage, Trust Me

Meanwhile, it only cost me $200.30 to heat my house — which is bigger than my garage and which I keep toasty at 72 degrees — during that same period. What it comes down to is that natural gas is just extremely cheap relative to the amount of energy it carries. I pay about $8.65 per thousand cubic feet of natural gas, which contains 1.037 million BTU (300 kWh) of energy. That’s about 3 cents per kWh compared to Michigan’s 16.26 cent average price per kWh of electricity .

As for Kerosene, which people commonly use in their garage space-heaters, that carries 131,890 BTU (38.65 kWh) per gallon, which — per the Energy Information Administration — costs about $2.65. So that’s about 7 cents per kWh — less than the 16.26 per kWh electricity rate.

Obviously my calculations don’t include losses, but these heaters are all fairly efficient, and that 16.26 number is so much more expensive than natural gas or Kerosene that it doesn’t affect my point, which is that gas is clearly a much more cost-effective way to heat your garage than electricity.

So don’t be a fool like me, a man who literally turned $1,000 into heat. I could have done exactly the same thing by simply lighting $1 bills on fire. Honestly, it might have been more cost-effective.

Update: Jason and I calculated that last statement, even though it was clearly hyperbolic (he forced me). According to a letter written on science website “Mad Science” by associate chemistry professor Todd Whitcombe, one dollar probably contains about 12.44 BTU of energy — or 0.0036 kWh. One thousand of those would give me at most 3.6 kWh of heat, which is obviously not the 5,840 I got from my electric heater. So I guess this whole debacle isn’t so bad when you compare it to literally burning currency…

Rust-loving Jeep man, cofounder and EIC of The Autopian, Jason's friend. Email: david@autopian.com
Read All My Posts »
PrevPreviousThere’s A New Chinese Electric City Car Named ‘Corn’ And It’s So Damn Cute I Want To Spit
NextThis Is How A Car Designer Would Make A Modern Classic British RoadsterNext