Facebook-f Twitter Instagram Rss
Menu
Menu
Home » How I Would Design An Electric Version Of A Classic American Wagon: A Car Designer Sketches Your Ideas

How I Would Design An Electric Version Of A Classic American Wagon: A Car Designer Sketches Your Ideas

After many long nights in a dark, smoky dust-filled back room here at Autopian Towers, we’ve come to a decision. Torchinsky shone a bright light into my eyes, grabbed another neon-colored soda from the Aztek cooler, pounded it on the table like a man possessed and started hissing something incoherent about taillights—what I think he meant was our car should have some, preferably a pair. I agreed with him while backing away slowly. It seemed safer that way.

Of all the brilliant suggestions we plucked from the comments of our introductory “Ask A Designer” story using a spectacularly non-scientific decision-making process that sadly didn’t involve bribery or blackmail, the one that we chose was a modern EV version of the traditional All-American Station Wagon. Yes, we decided that I’d try my hand at designing an actual EV wagon— not an SUV or ‘soft roader’ pretensions.

Will we ever see the market return to this type of car? Their size makes them ideal for swallowing batteries, and being lower to the ground helps with handling and aero efficiency. If we can capture a little of the look of those old aircraft carrier wagons of yore and update it sympathetically without ruining its soul, we might tap into some that sweet heritage appeal that helps sell Broncos, Wranglers and Challengers. 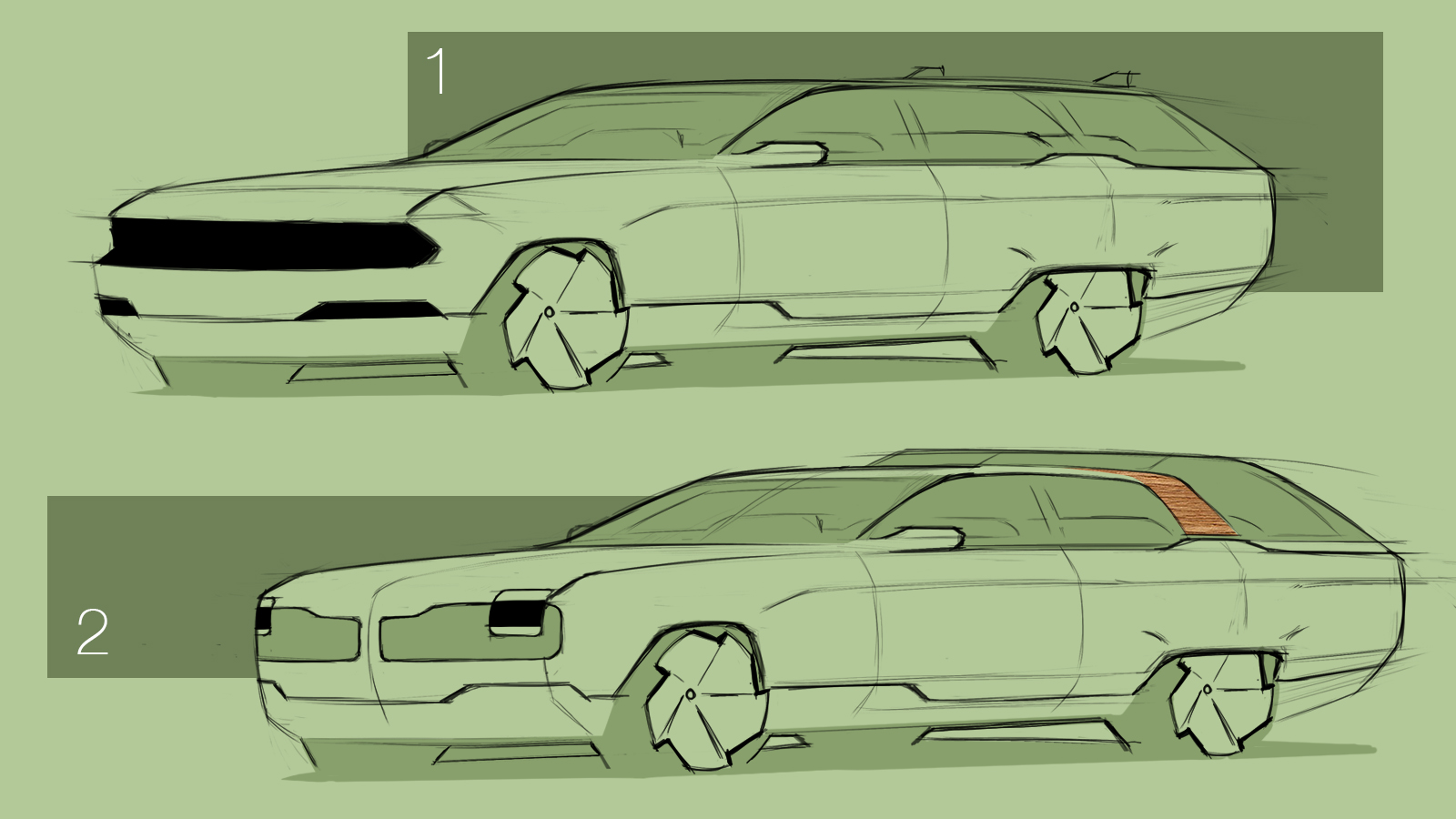 One of legendary GM designer Harley Earl’s edicts was always “longer, lower, wider,” and boy does this ever apply to wagons. The fundamental shape simply screams great proportions before the pen even touches the paper.

Here I’ve sketched out two front three-quarter views. Along with the rear three quarter view, these are the most common for a designer to use to show their ideas. This is because they show you two sides at the same time– important because a car’s design should work as you look around it and take in the whole thing.

Since we’re going for a slightly more traditional look, we don’t have the headlights wrapping around into the fender, or corners that are pulled in tight (this is more important for FWD vehicles, as it allows the designer to hide the front overhang).

On the second sketch I’ve added some wood paneling, but rather than slapping it down the side of the wagon I’ve used it as C pillar trim that wraps up into the roof. Why? If you were going to add wood to a new vehicle, you couldn’t just screw onto the bodyside like they used to. You would need it to be flush fitting – which would necessitate two different bodyside stampings–one for paneling, one without (so customers have the option). 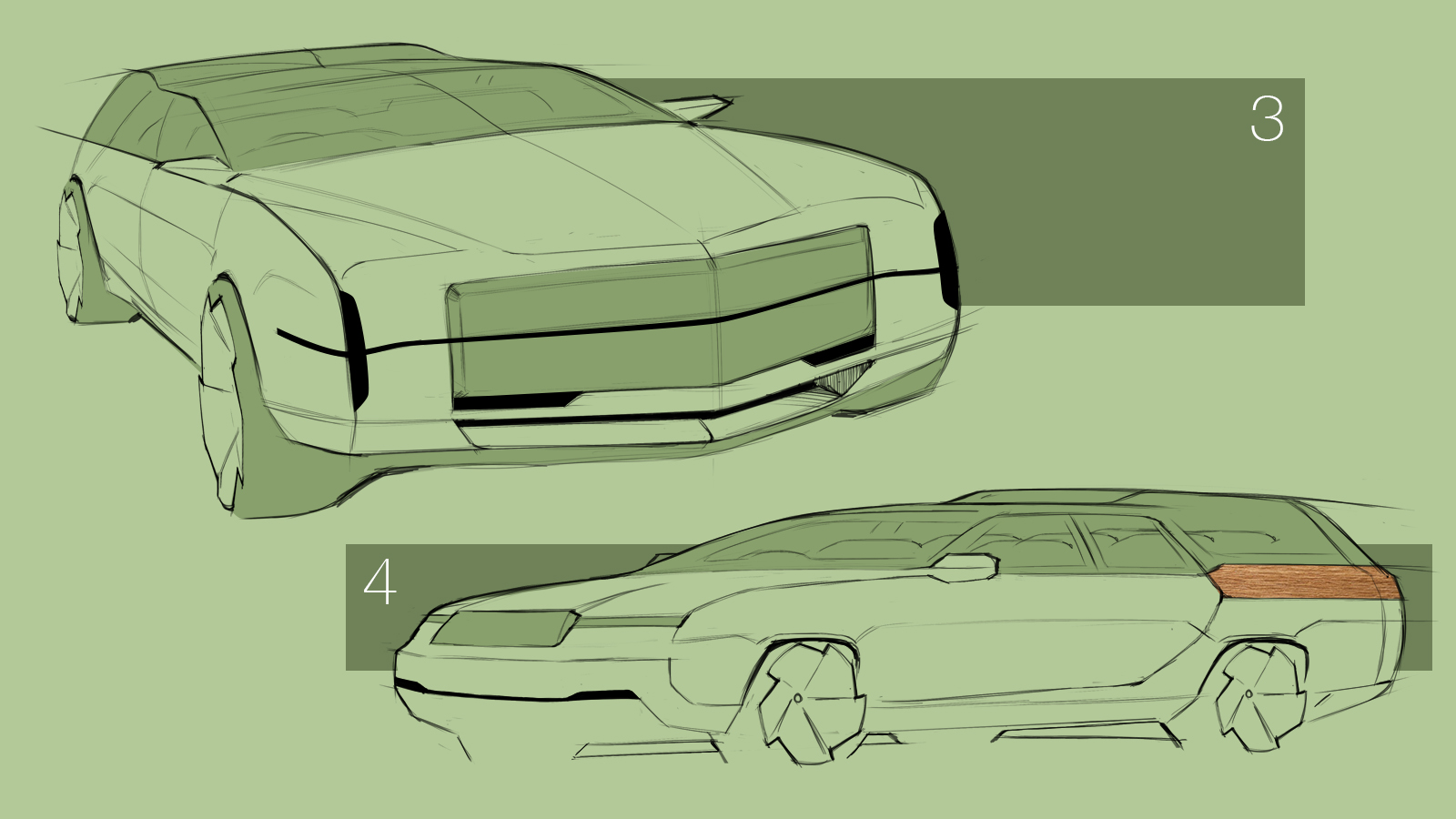 For the ones above I’ve done a slightly more dramatic front-on view. The lack of detail on the side of the car is deliberate– sketch three is all about the front graphic. I quite like this but it feels a bit Cadillac which may not be entirely appropriate.

The second sketch (number four) shows another front three-quarter with a more conservative front graphic and a different approach to the wood paneling. The beauty of sketching digitally is that once you’ve got your eye in and nailed the volumes, you can reuse and alter the same sketch over and over.

Chief designers love saying “I like that, give me ten more versions of it”–and you have to quickly churn out a load of variants. I don’t feel sketch four is as successful as the previous two; something about it doesn’t quite flow the way I would like, and I don’t think the front is modern enough. 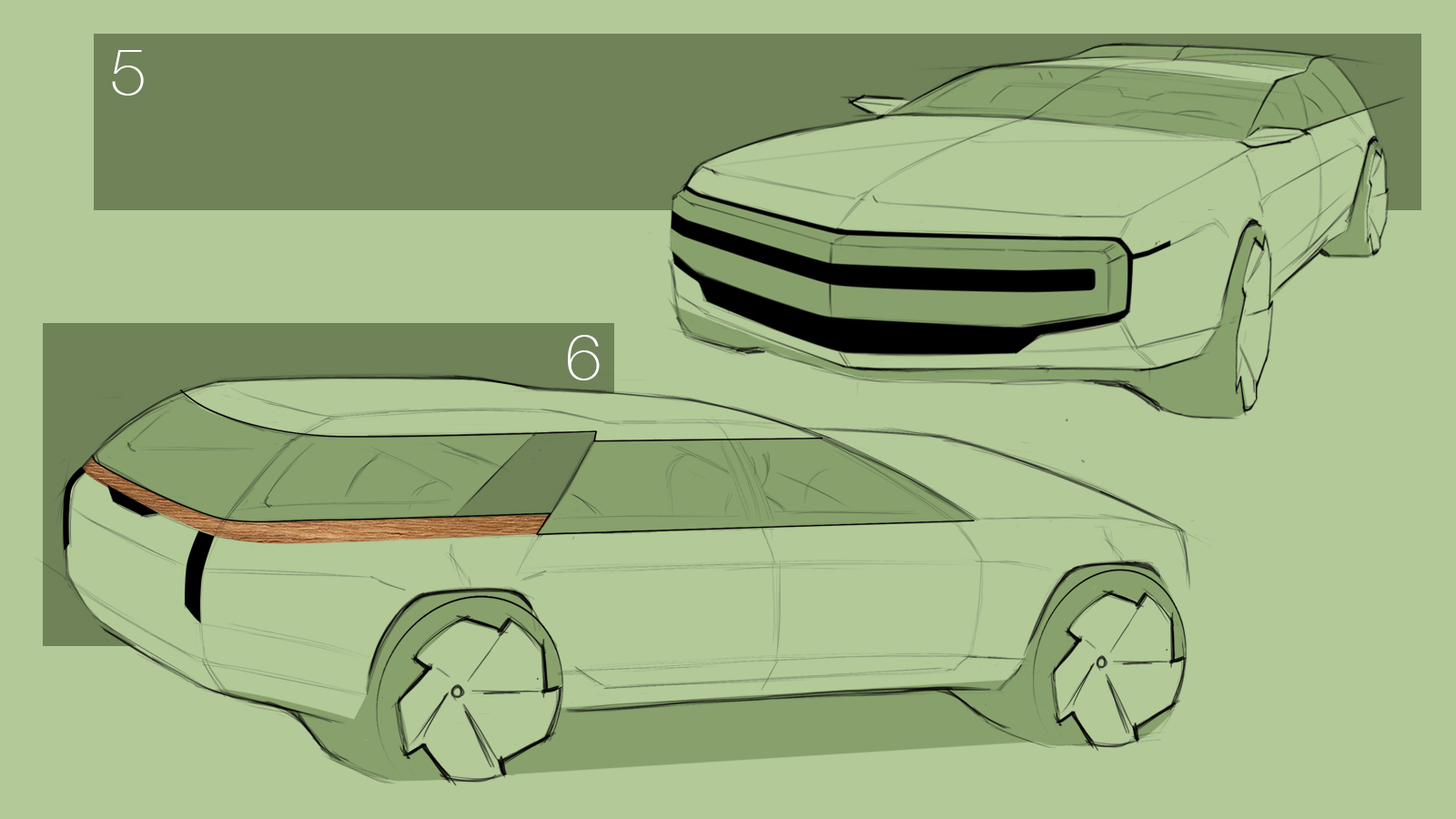 See what I mean? Sketch five is a redo of sketch three. I like this front graphic but it feels a bit like something you would see on a muscle car – not necessarily a bad thing, as muscle cars were often based on the two door version of a family of cars that included a wagon. But it might be a little aggressive for our wagon.

Sketch 6 shows another potential C pillar/wood paneling treatment, this time wrapping around the tailgate. I like the step up in the window line and the way it’s mirrored in the roof–it’s clean and modern. This is a higher rear three quarter view — these sorts of views are not used often as they are tricky to get right. They might be used if you have a particular roof or hood detail you want to show. In this case the designer may quickly knock up a digital 3D ‘scratch model’ or use an underlay to sketch over (as I did in this case).

So there you have it. Discuss and dissect in the comments below, feel free to sketch over the images, let me know what you like and don’t like, and I’ll take all your suggestions onboard and come up with the final wagon design next week.

[Ed Note: We decided not to use a poll here to decide because Adrian really likes seeing the thought processes and discussion in the comments! So, please, argue and talk and have fun!–JT]

All Sketches by Adrian Clarke

Professional Car Designer and writer about car design. I have a BA in Automotive Design and a Masters in Vehicle Design from the Royal College of Art in London, where J Mays was my tutor. He used to bring in donuts. I was hired from there into a major European OEM. I daily drive a 2011 L320 Range Rover Sport and also own a 1983 Ferrari Mondial QV. I always wear black, love goth music and have way too many books. twitter: @adrianfclarke. Instagram: adrianfclarke
Read All My Posts »
PrevPreviousThe Smart #1 Is Literally Pronounced ‘Smart Hashtag One’ Which Is A Shame Because It Seems Like A Cool EV
NextThe Surprising Ways Electric Car Suspensions Are Different Than Gas Car Suspensions: Ask An EngineerNext