I can’t recall exactly what sent me down this particular path into the world of David Hasselhoff and the sentient, fussy-sounding Trans Am known as KITT, but I recently learned about two related Knight Rider facts that are just too fascinating to not tell you about. Both of these come from the Knight Rider Historians Official YouTube account, so you know that they’re for real and well-researched, and possibly funded via a MacArthur Genius Grant, though I have no proof of that. They’re both remarkable behind-the-scenes details that mostly have to do with how a TV show that relied on a hero car that gets put into potentially damaging situations every week deals with the realities of what that means. And, even better, it involves lots of rubber and air-cooled Volkswagens.

Do you need to be reminded about Knight Rider? Probably not, but it can’t hurt, right? Here you go:

The first fact feels like one of those ideas you’d have that seems so obvious, but you also half expect that there’s likely a reason why you could never actually do it. Like the old cliché about making the whole airplane out of whatever the black box flight recorder is made from: doing so would be far too heavy and expensive, and you know the deal. So, when it comes to having your hero car bash into other cars every episode and yet you somehow need it to not look like a beer can on the floor after a frat party, could you just, you know, make a huge rubber shell to cover the whole car and protect it?

Turns out, you can, and that’s exactly what the prop people on Knight Rider Did:

The rubber shell seems to have been part of the production plan from the very start, showing up in a pre-pilot video used to sell the show in the first place. If you have a slight masochistic streak and regularly watch old episodes of Knight Rider, you can spot when KITT is wearing the rubber shell by looking at the A-pillars: 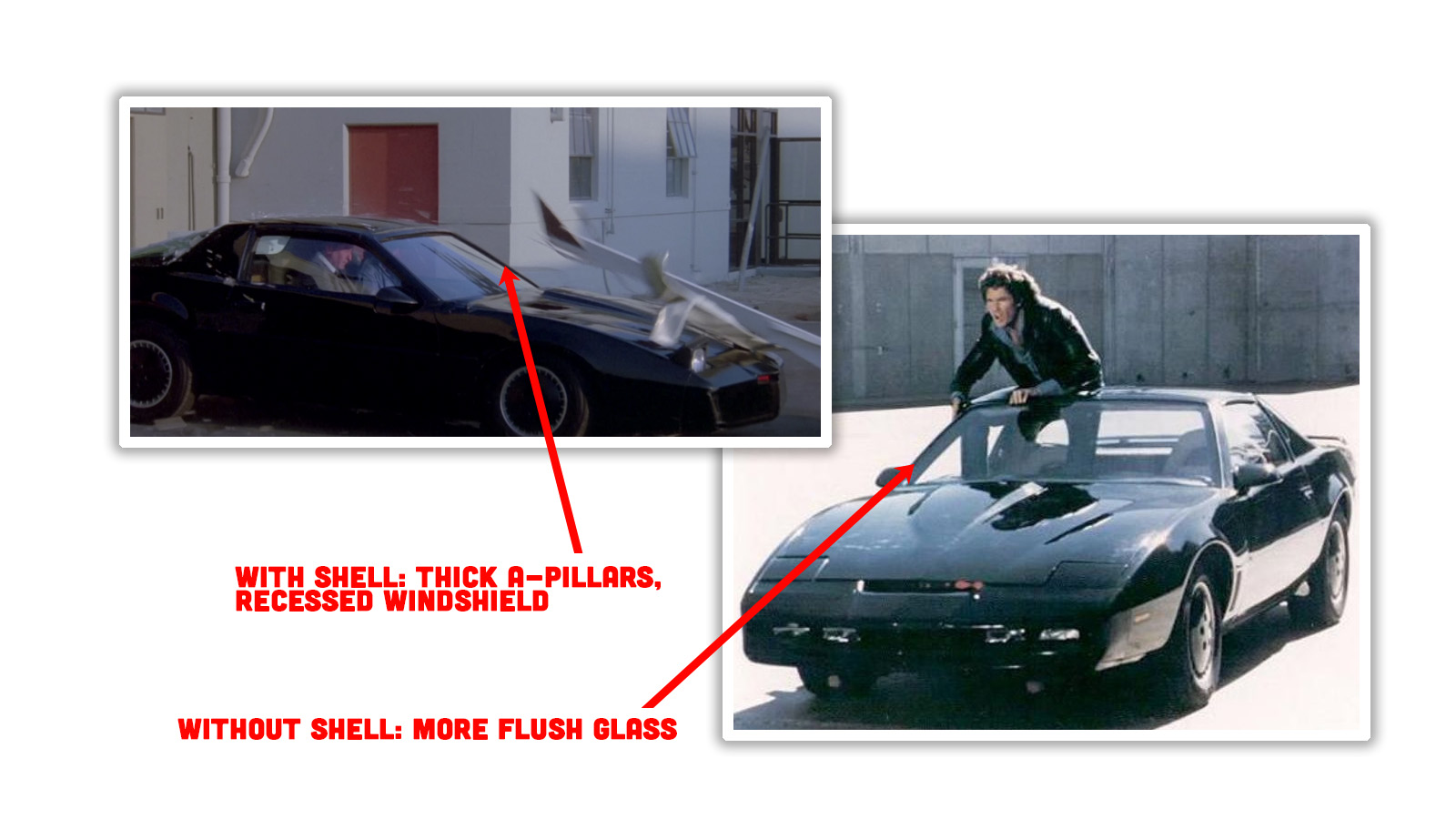 The tell-tale for the early episodes with the shell is that, because it’s a thick rubber shell that fits over the car, things like the glass of the windshield will appear more recessed. Overall, they did an excellent job making a rubber mold of the car for the shell, though soon after the show went on the air the Trans Am front end was updated, so the rubber shell just had its face lopped off, and that was that. You can see this shell far more obviously as a result: 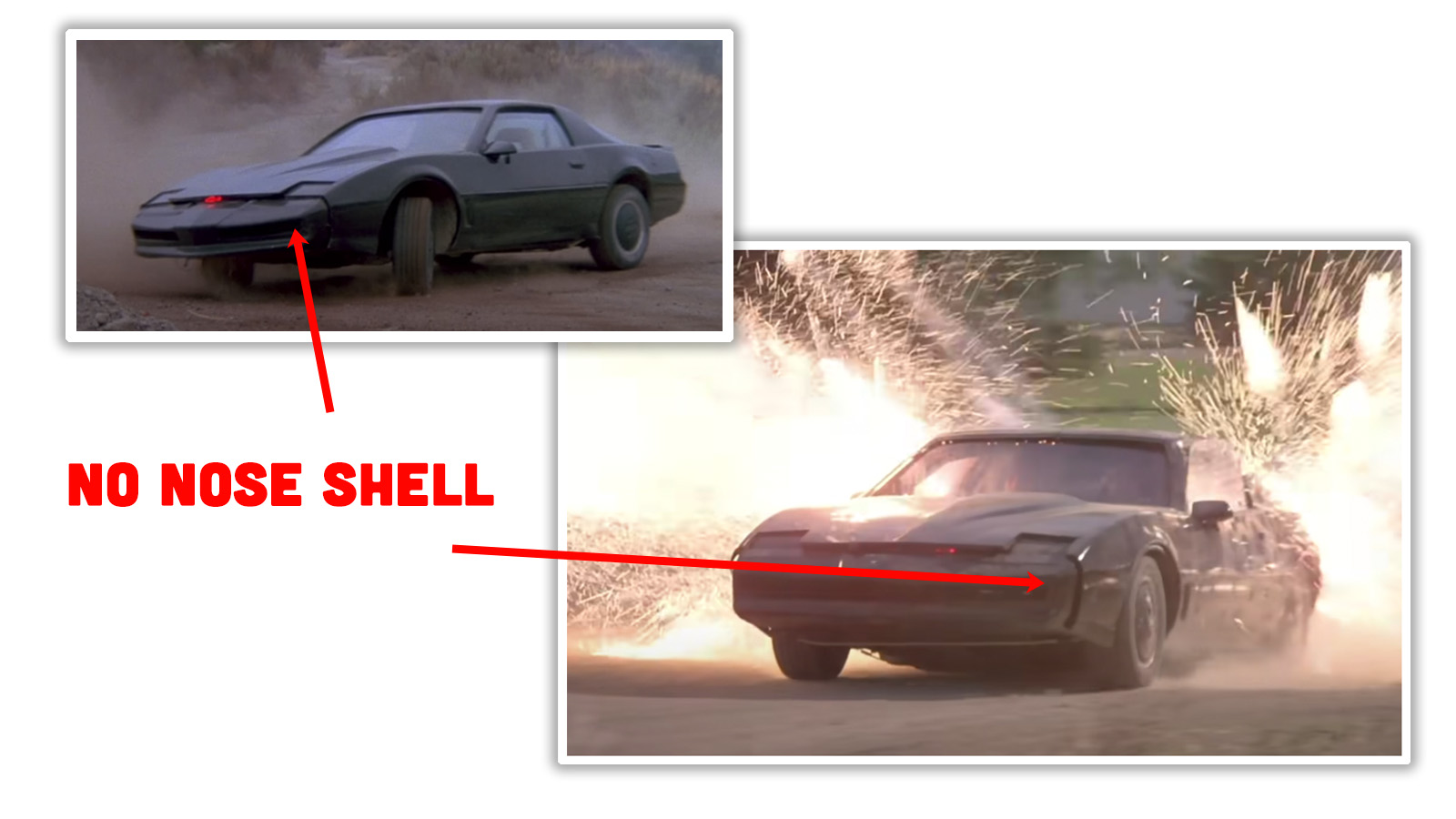 Of course, in the era of CRT, low-definition televisions and lots of motion and explosions, most people would never notice watching the show. It’s only in our modern era of being able to grab high quality freeze-frames that the inherent crappiness is apparent.

That’s not really fair of me to say, though; the shell was an impressive bit of prop-making, and while it’s not clear exactly who made the shell, but it’s possible it was either made internally, or, as the video speculates, by none other than car customizing legend George Barris. 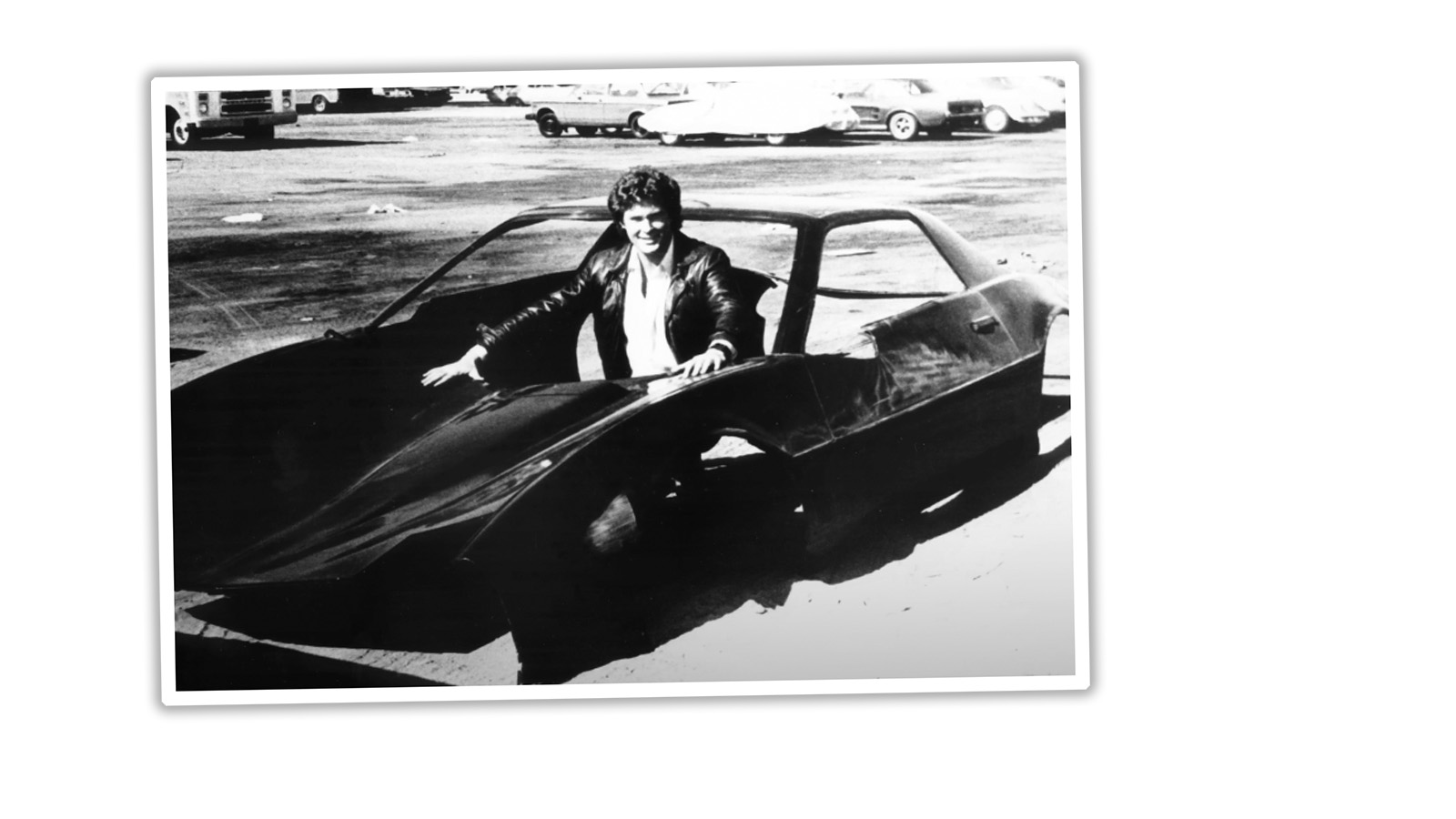 In addition to protecting KITT from getting all dinged up, the rubber shells made also served another purpose: they formed the entire body of what is now my favorite version of KITT, the one used for the really damaging or dangerous jumps and other potentially destructive stunts. The one the production team called the Flivver, which was essentially a VW Beetle-based sand rail.

When it came to doing stunts that demanded KITT really catch some air or crash hard into or onto something, the team needed something more rugged, lighter, and, especially, cheaper than the Trans Ams they used for KITT. They couldn’t just replace Trans Ams or Trans Am parts like candy, after all. But, in Southern California in the 1980s, there was a rugged, very adaptable and wildly cheap and available car that would work: the Volkswagen Beetle. 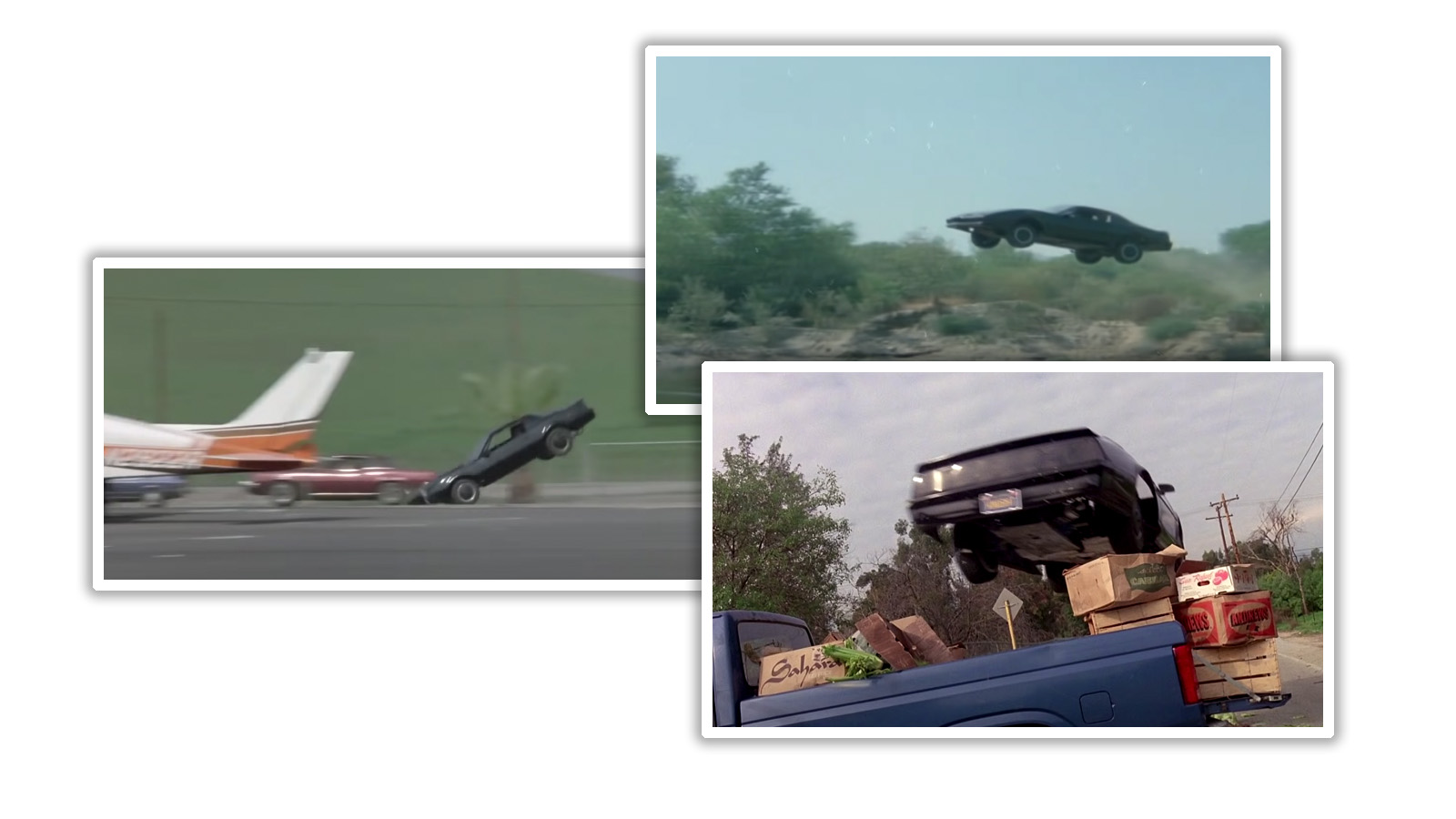 Beetles had been converted into dune buggies and sand rails for years, and were great at doing jumps and landing and generally taking all sorts of abuse. If something broke, VW parts were plentiful and cheap. So, the production team built what is essentially a tube-framed VW sand rail: 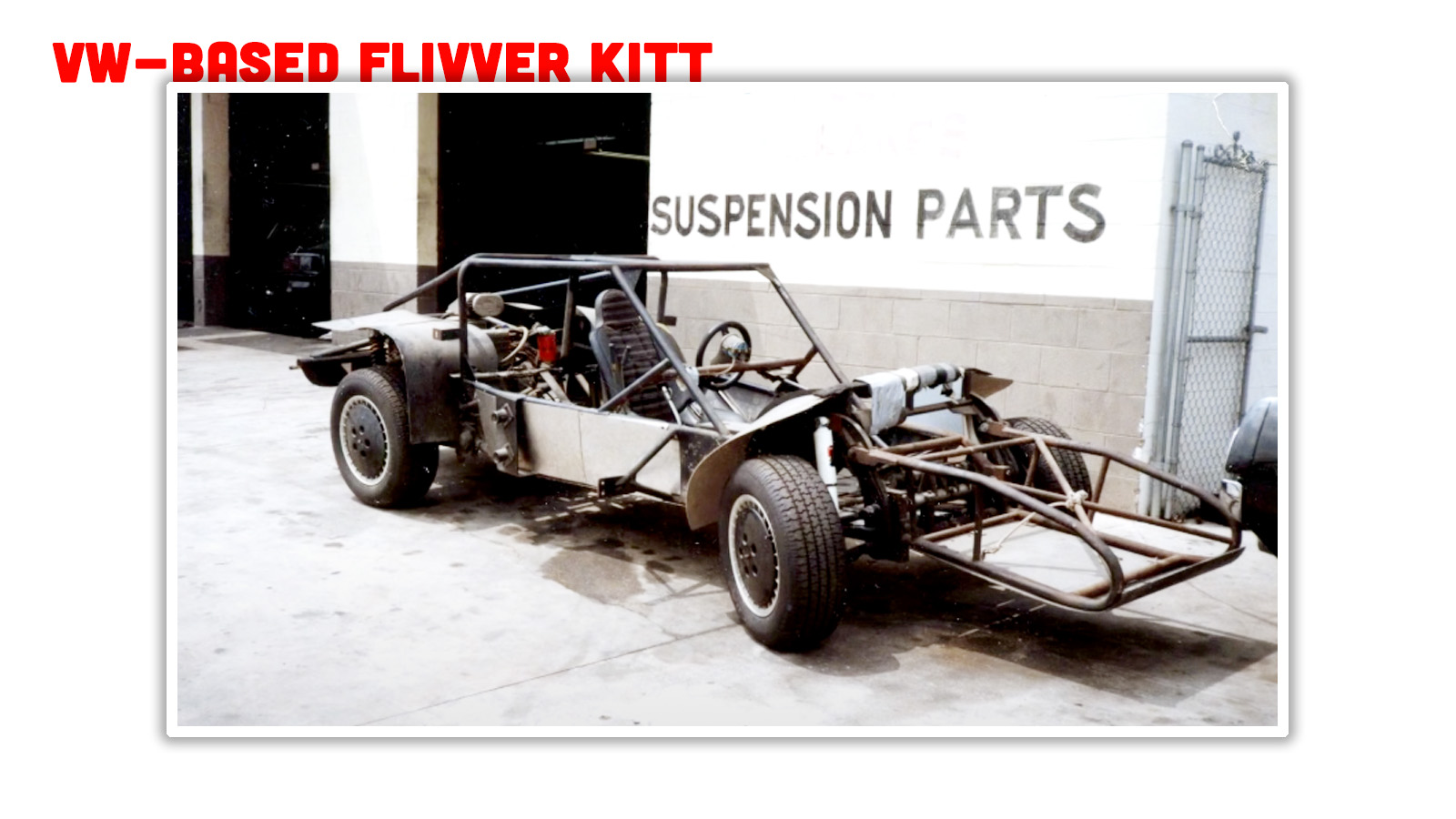 …but designed to fit the dimensions of a Pontiac Trans Am, and especially one of the rubber bodies the team had already made for the rubber protective shell for KITT. Look at all that empty front overhang! You can also see the tell-tale VW double torsion-beam front axle there, and the normal air-cooled VW engine is out back there, with what appears to be some kind of periscope-looking air intake sticking up.

I’m not sure how I’ve managed to live anything approximating a fulfilling life before I knew these details about KITT and Knight Rider.

I'm a co-founder of the Autopian, the site you're on RIGHT NOW! I'm here to talk to you about taillights until you cry and beg me to stop, which I absolutely will not. Sorry. Hug? Also, David's friend.
Read All My Posts »
PrevPreviousI Ran Into My First Car At A House Party
NextParts Bin Puzzle: What’s Under The Fiberglass Of These Quirky Amphibious Kit Cars?Next