Back in the mid 1980s, when Baltimore was working hard to steal the American Taillight Enthusiasts and Fetishists Convention (ATEFCon) from its traditional home at Anchorage’s Dena’ina Convention Center, the Baltimore Chamber of Commerce started sending representatives to taillight-themed bars and clubs all over the country, hoping to win favor. They used a number of tactics: drugs, sex, violence, blackmail, but the one I remember most was their Today’s Taillight program for public schools. I’d like to revive that here.

As we all remember from the news reports, the Baltimore initiative crashed and burned hard when a whistleblower revealed that the mayor’s office was attempting to pressure Madeline L’Engle, author of the beloved children’s book A Wrinkle in Time, to endorse Baltimore’s ATEFCon hosting or they would release a sex tape of her and author and radio personality Garrison Kellior. It wasn’t even ever clear that such a tape even existed, but the whole scandal was death to Baltimore’s bid.

(Off the record, that tape definitely did exist, because I saw it at a party of select taillight community VIPs at SNL-alumnus Nora Dunn‘s sex-aviary in 1998. It’s so hot.)

[Editor’s note: As an editor who would like this site to continue to exist, I’m going to make it clear that this is a joke, presumably a reference to the D.A.R.E. program that was so prevalent in the U.S. Please don’t sue us L’Engle estate. -DT]

Anyway, the one good thing to come from all that mess was the Today’s Taillight program, which introduced K-12 kids to important taillights as part of their school curriculum. I remember the Hella-sponsored filmstrips and the big, wall-mounted displays of brightly flashing taillights provided to my schools, and how much they influenced me to pursue a life of taillight appreciation.

So, with that in mind, I’ll periodically do a Today’s Taillight here at The Autopian! Maybe it won’t be every day, but I will periodically select an important taillight from automotive history to appreciate and explore. We’re going to start with one of my absolute favorites, the taillights of the 1963-1968 Lancia Fulvia Berlina and the 1965-1976 Lancia Fulvia Coupé.

Lancia, just to refresh you, was an Italian carmaker with a long history of innovations. The Lancia Theta was the first car with a full electrical system, in 1913, and the first unibody car was a Lancia Lambda, from 1922. The first production V6 engine was a Lancia, from 1950! Lancia has always been envelope-pushers technologically, though in recent years they’ve just been mostly re-badged Fiat-Chrysler cars. But let’s focus on their glory years.

I mentioned the cars’ model years are there because the Fulvia Berlina did change its taillight design after 1968, though it looks like the Coupe retained the ones I’m thinking of the whole time.

Here’s the lights I’m talking about: 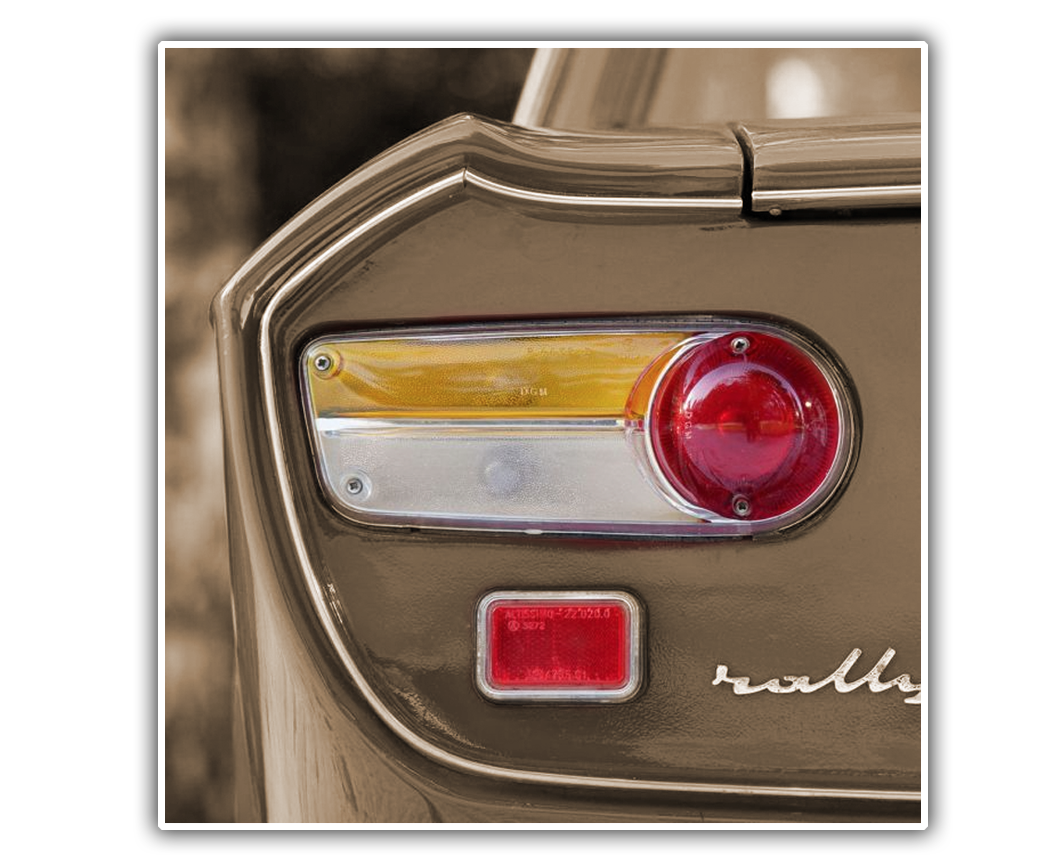 Look at them! It’s like a majestic wing of tri-colored light! There are actually two variations of this lamp: the example above is from the coupé, while the Berlina (you know, sedan) version had them with a slightly different, more tapered, less wing-like shape: 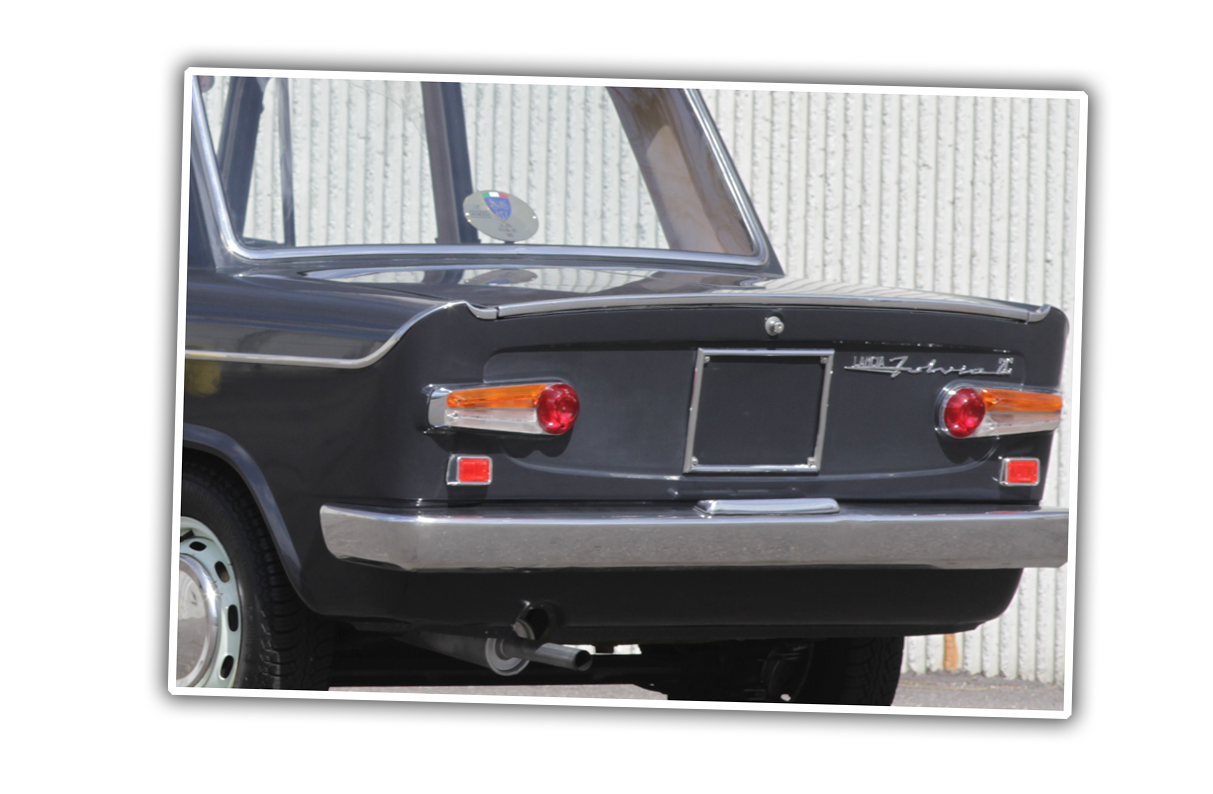 The Berlina version also was a good deal more dimensional, with an incredible-looking profile as well: 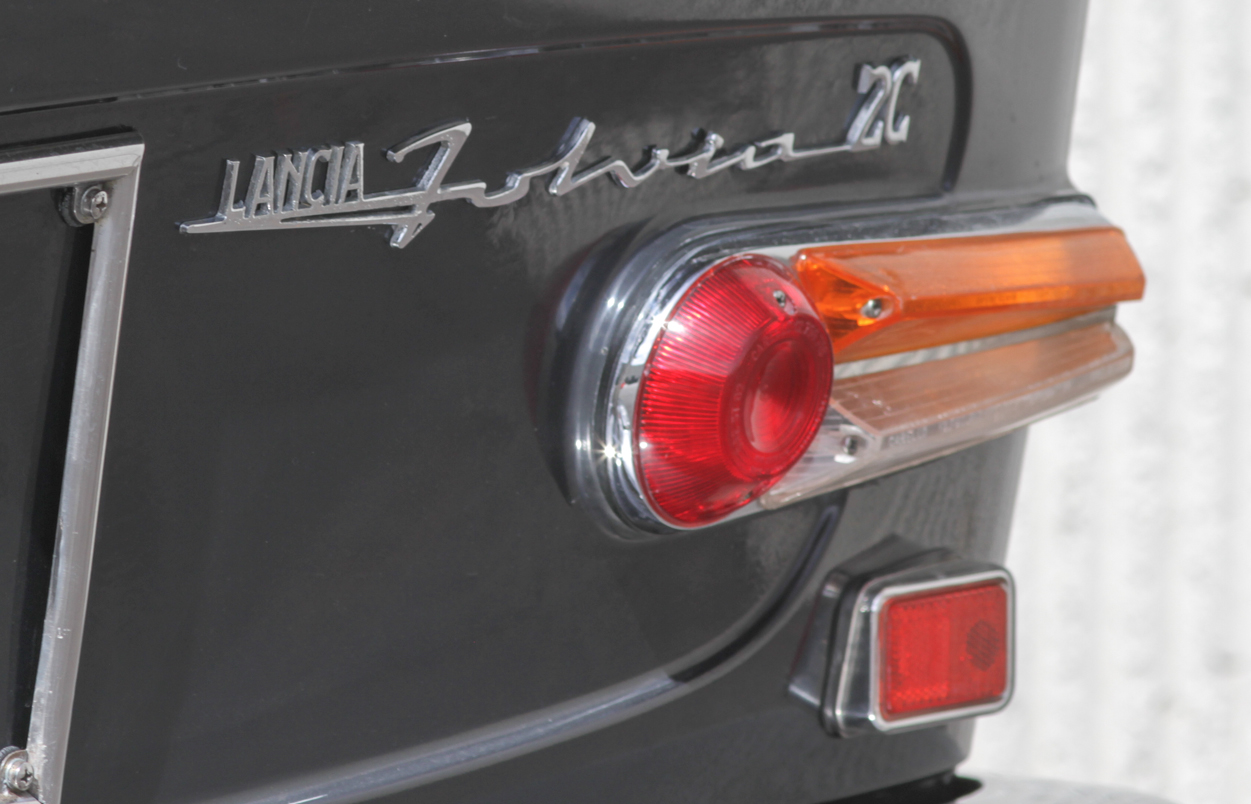 Look at that! Those are downright sculptural, even! Stunning!

Oh, I suppose these also had some chromatic variants, as some had amber rear indictors, while others used red: 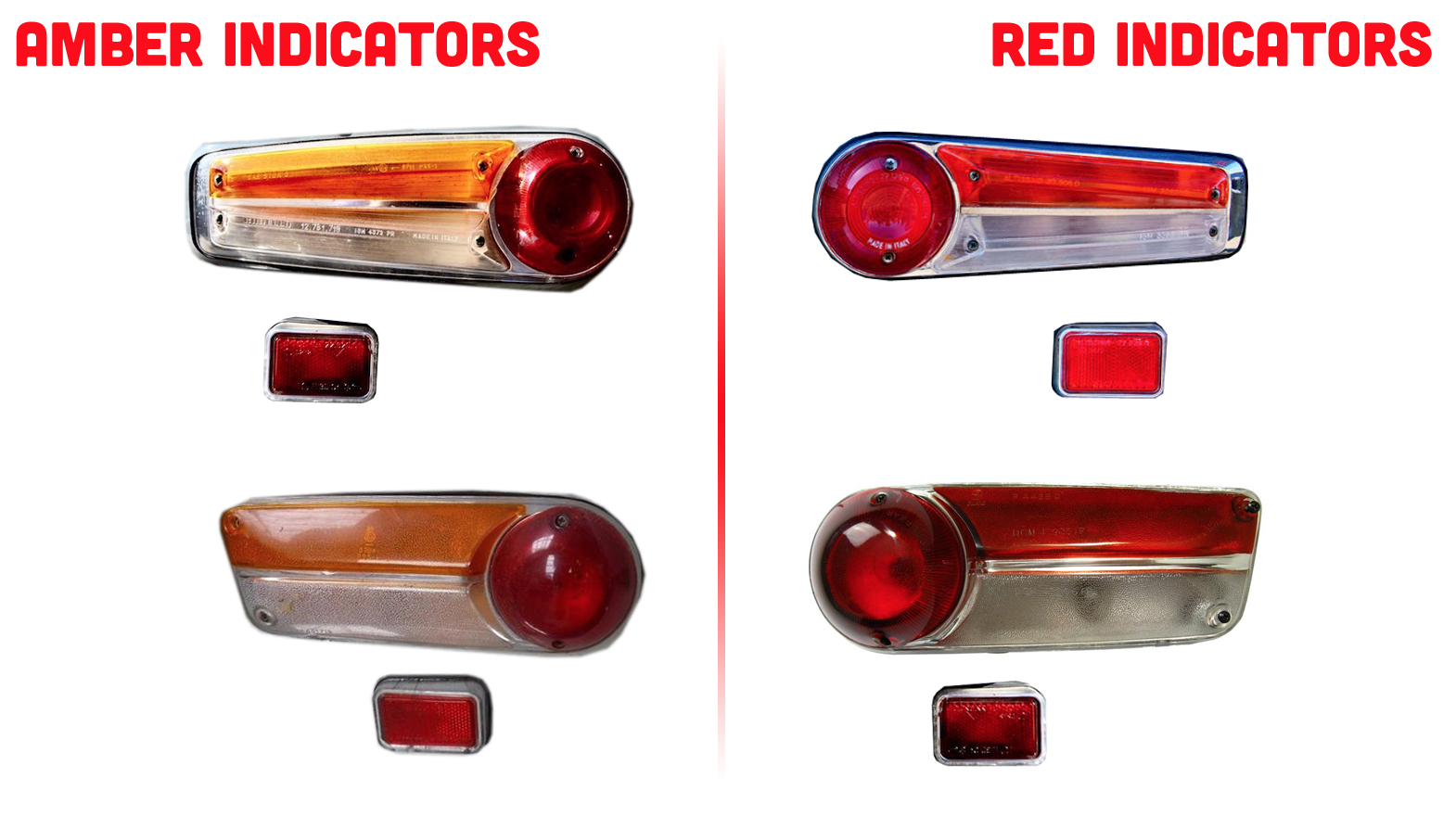 While I am partial to amber rear indicators, I think these lights work well with red ones, too, which can’t be said of every taillight design.

What I really like about these lights is that it seems the designer started with an off-the-shelf part – that round red unit that forms the brake/tail portion, likely as a cost-saving measure, and then incorporated that into a housing with two unique lenses for the indicator and reverse lamp.

This sort of cleverness fits the overall design of the car, conceptually. The Fulvia was designed under the eye of Lancia’s chief designer, Pietro Castagnero, who gave the car – the Berlina especially – a certain understated yet potent sophistication. 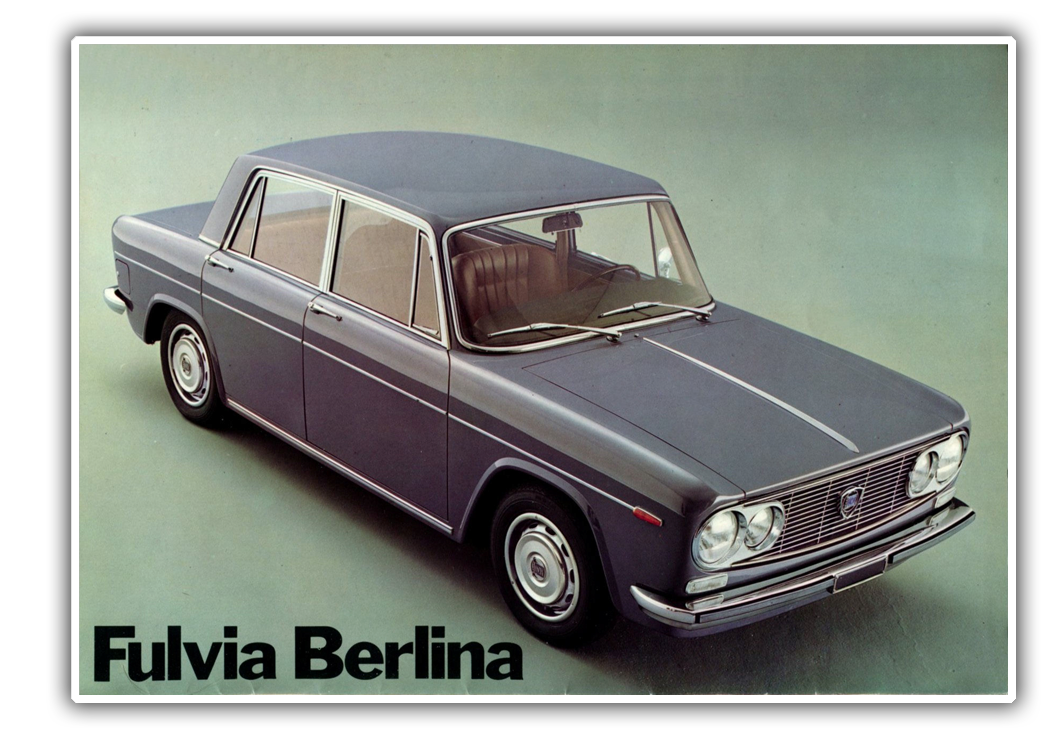 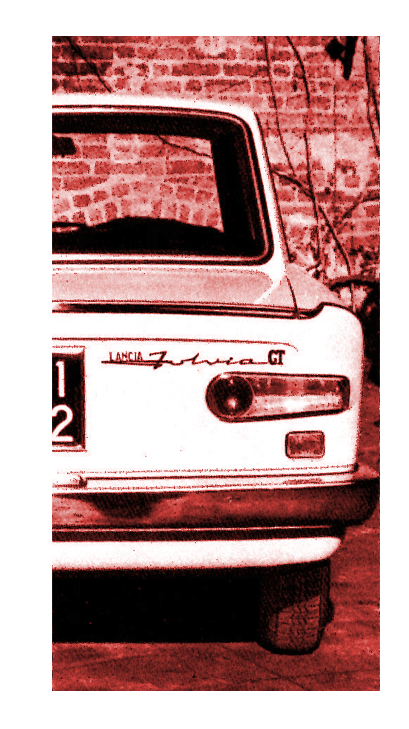 At first glance, the car may seem boxy and static, but the more you look at it, the more you find it’s actually a compendium of well-executed details, everything reeking of quality and careful engineering, which fits the car’s mechanical specifications too, relying on a narrow-angle longitudinal V4 driving the front wheels, a layout very much tailored to a lover of engineering novelty and refinement.

Most of the design is boxy, so you’d think the taillights would follow suit, but they don’t which is part of what makes them so remarkable. They’re like jewelry, subtle yet attention-luring, and like jewelry, their job is to stand out, not blend in, which is why a square-themed rear lamp cluster would have been so wrong for the car, as it would have just been too expected, too easy, too forgettable.

Also interesting about these lights are the way they flaunt accepted convention regarding proportions of light areas; usually, red tail/brake is largest, then amber indicators, and then, the clear reverse lamps, which are usually far smaller than the rest. Here, I think the reverse lamps may actually have the largest area of all sections, by a small amount at least, on the Coupé’s more wing-like version, and on the Berlina, it’s about equal to the indicator.

Also interesting about these lights: they’re one of the very few that could work well in almost any orientation: horizontal, vertical, inverted – I can’t think of a context where these would look bad.

This is an unusual and bold design choice, and I respect it, even if it is a little counter to rationality, since reverse lamps are used comparatively rarely compared to the other sections.

The only real issue I have with these lamps is the failure to incorporate the reflector, which just sits below, a tacked-on little rectangle. I’d bet there is some sort of round lens that incorporates the reflector that could have been used instead of that little scarlet postage stamp, which would have made for a cleaner setup, but I suppose I’m a few decades too late to pen an angry letter to Lancia.

Everyone, I hope you’ll take a moment to appreciate Today’s Taillight, the taillights of the Lancia Fulvia, and perhaps you’ll find them as inspirational and life-affirming as I have.

I'm a co-founder of the Autopian, the site you're on RIGHT NOW! I'm here to talk to you about taillights until you cry and beg me to stop, which I absolutely will not. Sorry. Hug? Also, David's friend.
Read All My Posts »
PrevPreviousThat American EV Plant Hyundai Plans To Build Might Be Coming To Georgia
NextBrits Are Freaking Out Over Vehicle Inspections And They Need To Calm The Hell DownNext