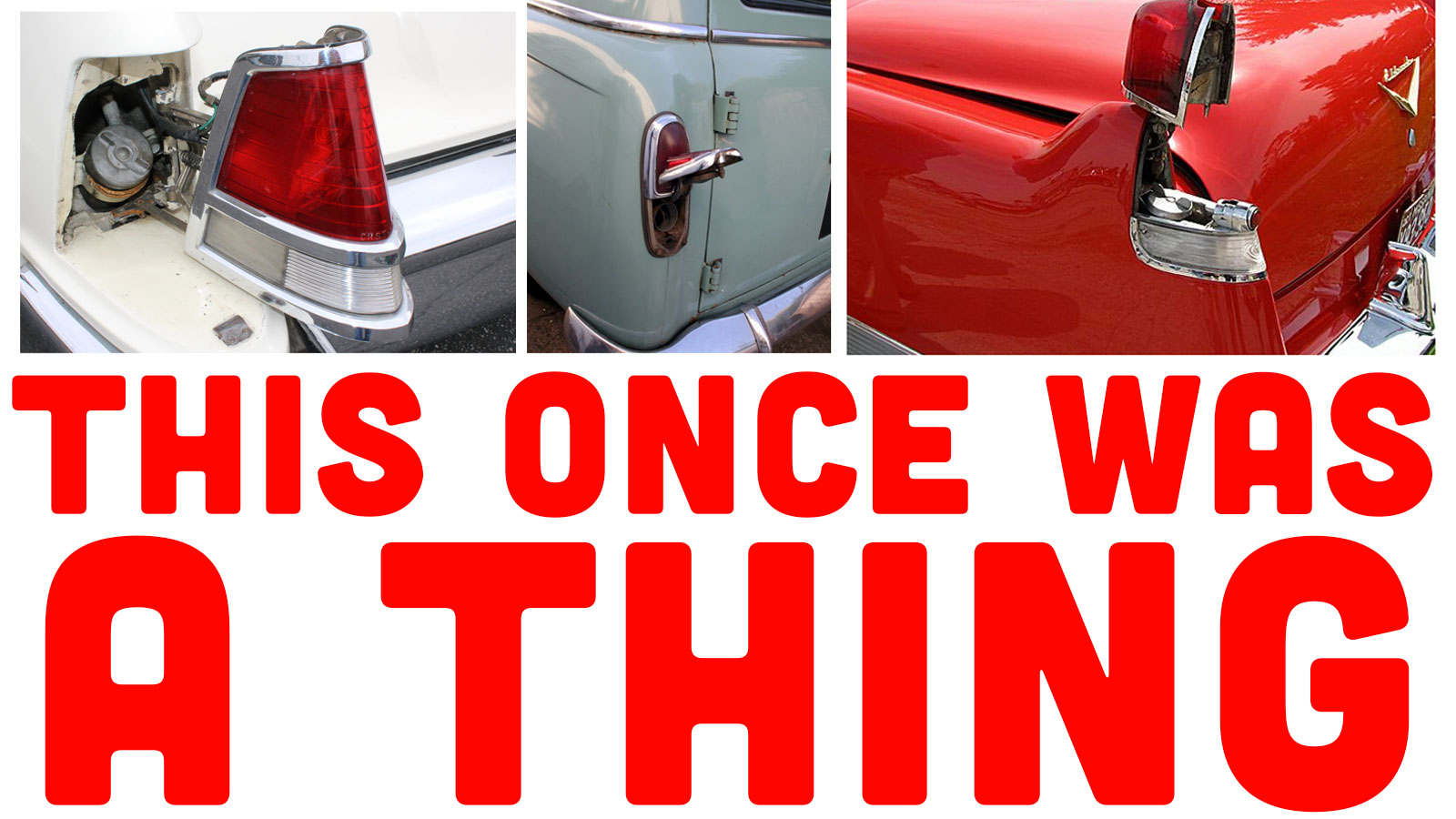 This week will be a bit different for our Moment of Taillight Appreciation, because instead of focusing on one or two specific taillights as I’ve been doing, I want to focus on a fascinating trend that has been effectively extinct for years, but has a bit of a possible, if altered, comeback happening as we speak. Among the taillight community, this category of taillight is controversial; some small sects of purists deride them as being debased into serving a needless secondary purpose, but I think most taillighters genuinely enjoy these. I’m talking about taillights that hide fuel fillers.

Yes, this was something of a trend in the 1940s and 1950s, where a car’s fuel filler would be entirely obscured behind or underneath a taillight, which was hinged or on some sort of pivot to swing or flip or turn out of the way to give access to the gas cap. They’re fun! Like a bookshelf that hides a door or a secret panel in, well, pretty much anything, designs that offer hidden surprises almost always delight people.

Well, maybe not if you’re not familiar with the car and you have to fill it with gas and you walk all around the damn thing and have no idea where the fuel door is. That would be annoying. But for everyone else, pulling up to a gas station, giving a sneaky look around you, and then making your taillight pop up to reveal your gas cap is essentially everyday spy shit, and the world appreciates that.

From what I can tell, the first mass-market car to design a taillight that hid a fuel filler within was on the 1941 Cadillac Series 62: 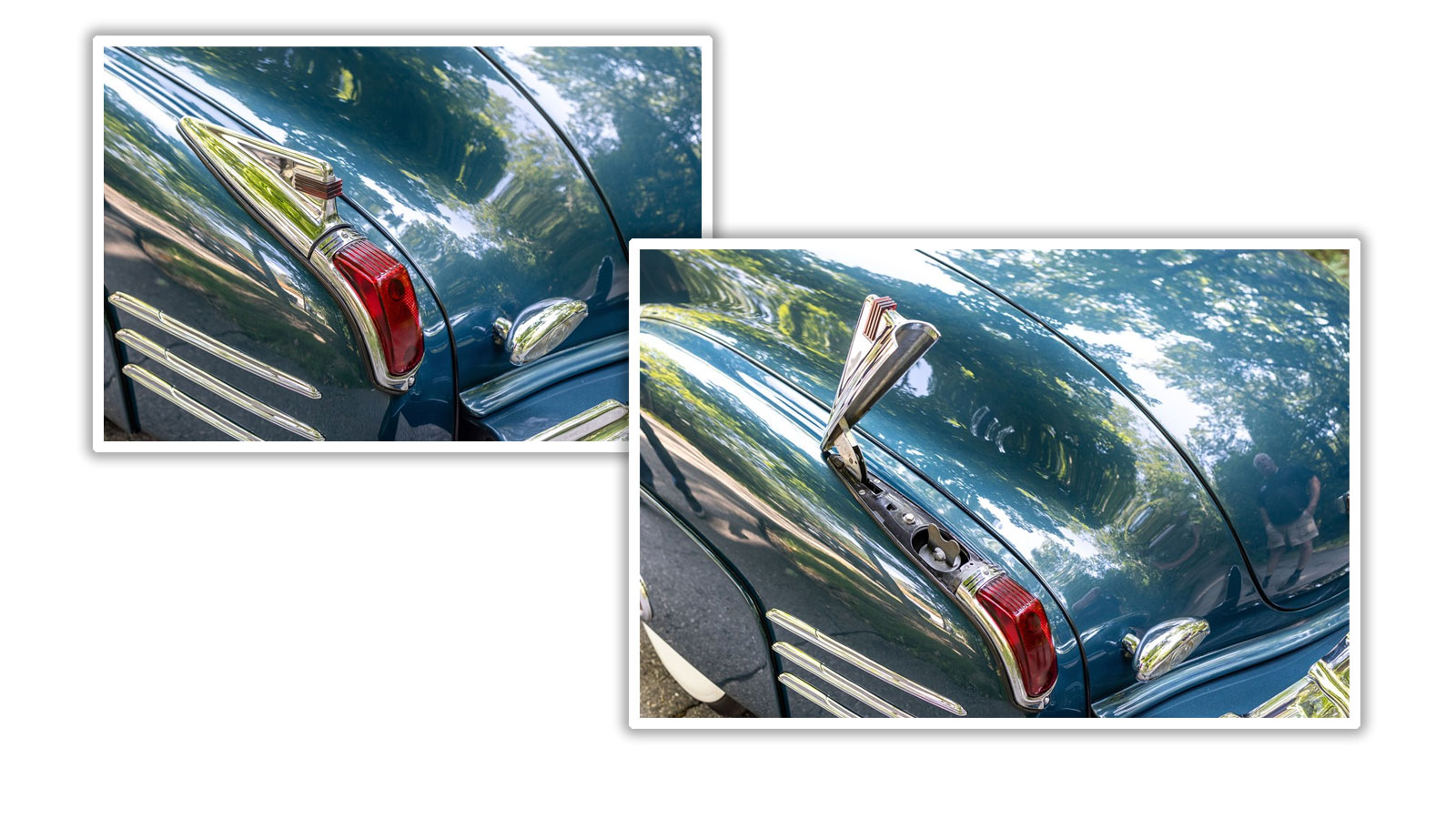 Also noteworthy taillight-wise on this old Caddy is the use of that single reverse lamp. But let’s get to that hidden fuel filler; you’ll note that while it’s hidden in the greater taillight housing and trim, the light unit itself doesn’t move. Sure, there’s a little red reflector part on the trim that lifts up, but I do not think that part actually illuminates or gets power at all.

This style was used a number of times, where the fuel filler was hidden within the taillight trim or housing, but the light itself didn’t move. Chrysler’s former fancy-trousers marque, Imperial, did this a few times, along with a some others like Oldsmobile and Nash: 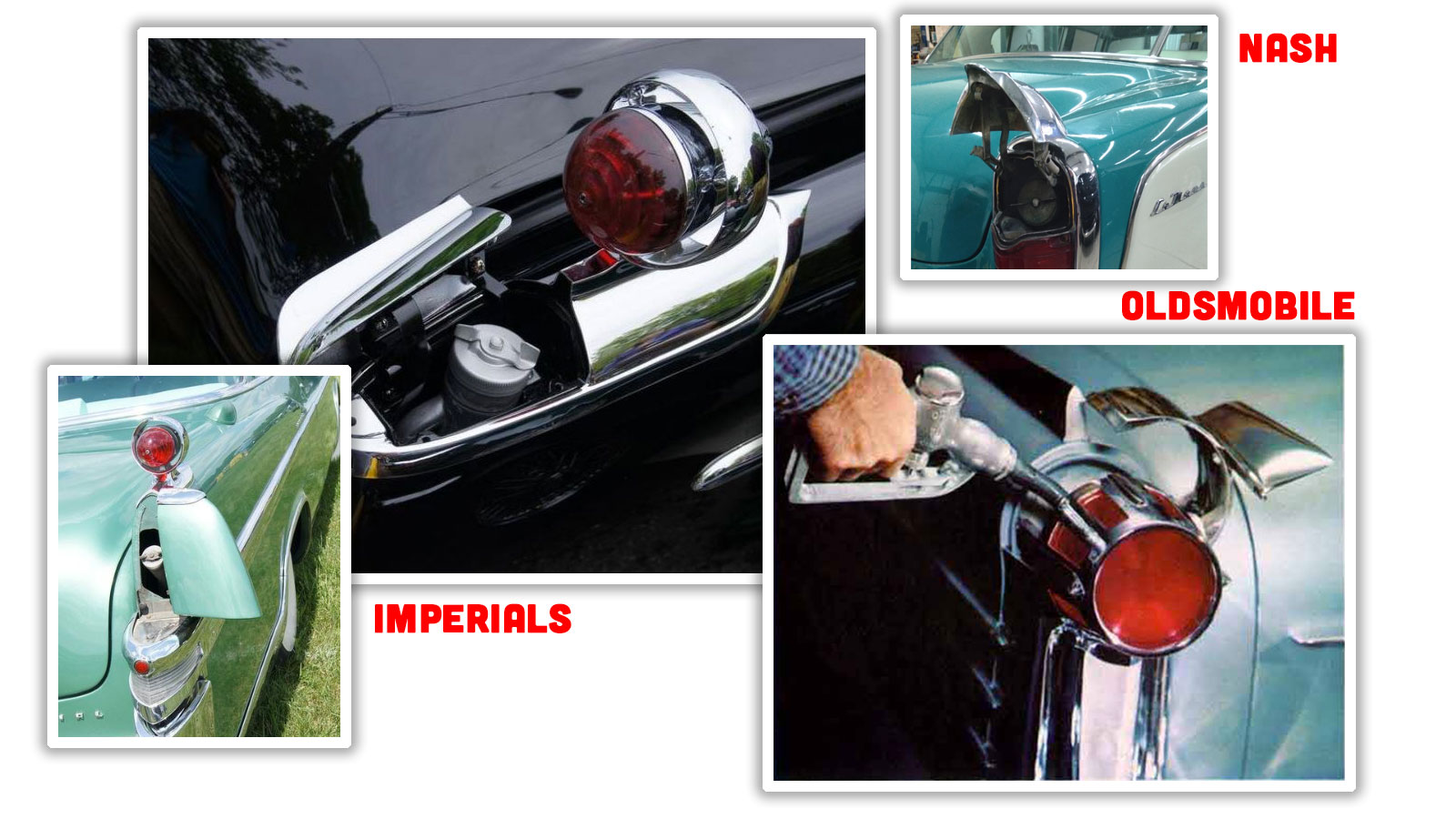 Other adherents of the taillight-that-you-can-fill-with-gas concept got bolder, and actually hinged the light unit itself out of the way. Examples of this approach include Cadillac, again, who did it from 1949 to the early 1950s– you pushed the little round reflector as a release for the hinge! Aw hell, may as well show you:

So cool, right? Anyway, there was also the 1956-57 Lincoln Continentals, there were multiple Chevrolets, and while this seemed to be primarily an American affectation, at least one European automaker gave it a go, Peugeot: 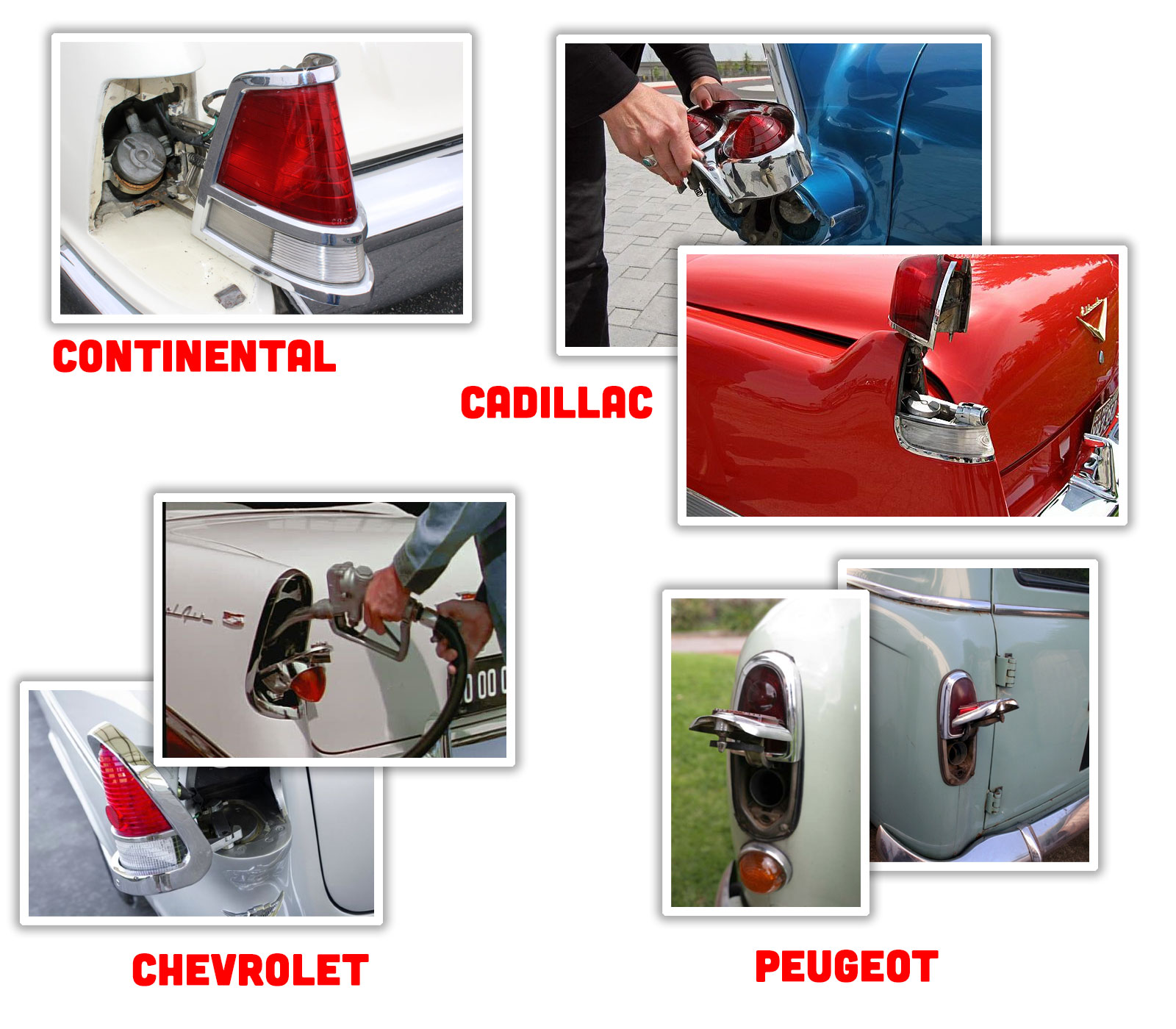 For a while there, this was definitely A Thing. By the 1960s, though, the trend had pretty much died out, and if your shame about having a fuel filler was so intense that you needed to hide it, tucking it behind a flip-down license plate became the preferred solution for (almost exclusively) American cars well into the 1970s, when a ban on center-rear fuel fillers killed it. (Well, I should correct this: GM stuck with it until at least 1996 on the Impala SS, but it was very uncommon that late.)

I wonder if part of what cause the demise of the taillight fuel filler was the fact that you had to have some often-flexed 12V wires going to the taillight, right over a possibly open hole that led to a tube that led to a big tank full of gasoline. If the insulation on those taillight wires cracked and cause the wire to ground onto something metal, making a spark, that could mean a lot of trouble.

In fact, I have a memory of some ’80s or early ’90s movie where a character smashed a taillight, pulled out a bulb on some wires, broke the bulb, and stuffed all of that into the fuel tank, so when some other character hit the brakes, it would make a bomb. I’ve been trying to find out what the hell that movie was for 20 minutes here, but I can’t seem to figure it out. I’m also not sure I believe most cars have that much play in their wiring.

[UPDATE: The Bishop comes through! Our Daydreaming Designer knows the movie: Bad Influence, from 1990, a Rob Lowe/James Spader thriller, I guess, about some stranger who meets someone and goes all nuts on them, a trope that came up a peculiar amount in movies of that era.

Here’s a screengrab of the part I was describing: 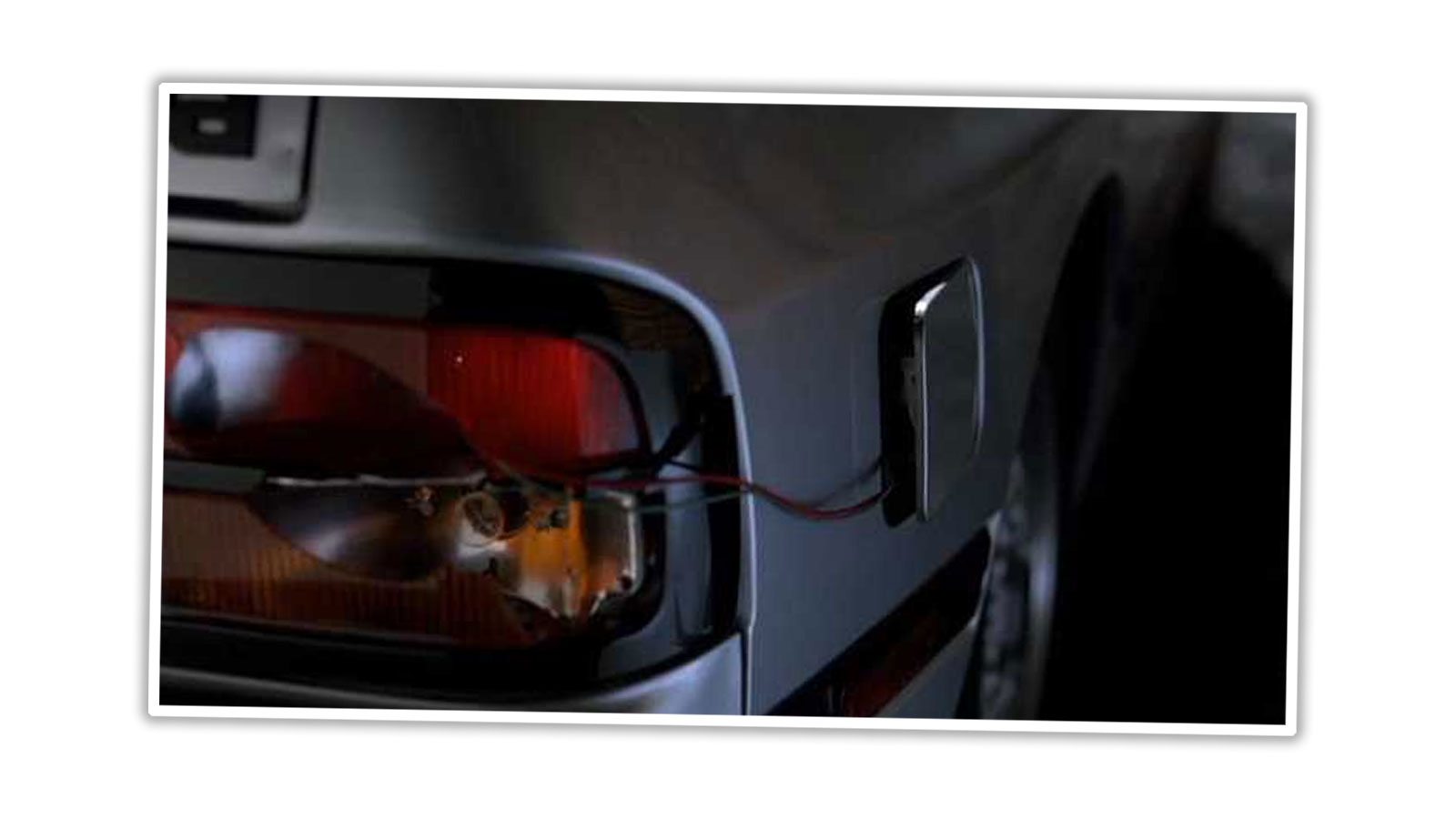 Anyway, I mentioned that this funny old idea is sort of experiencing a revival, with an emphasis on the “sort of.” It’s not a fuel filler anymore, but Teslas do have their charging port located in their taillights, on the side, where the side marker lamp reflector flips up to reveal the port: 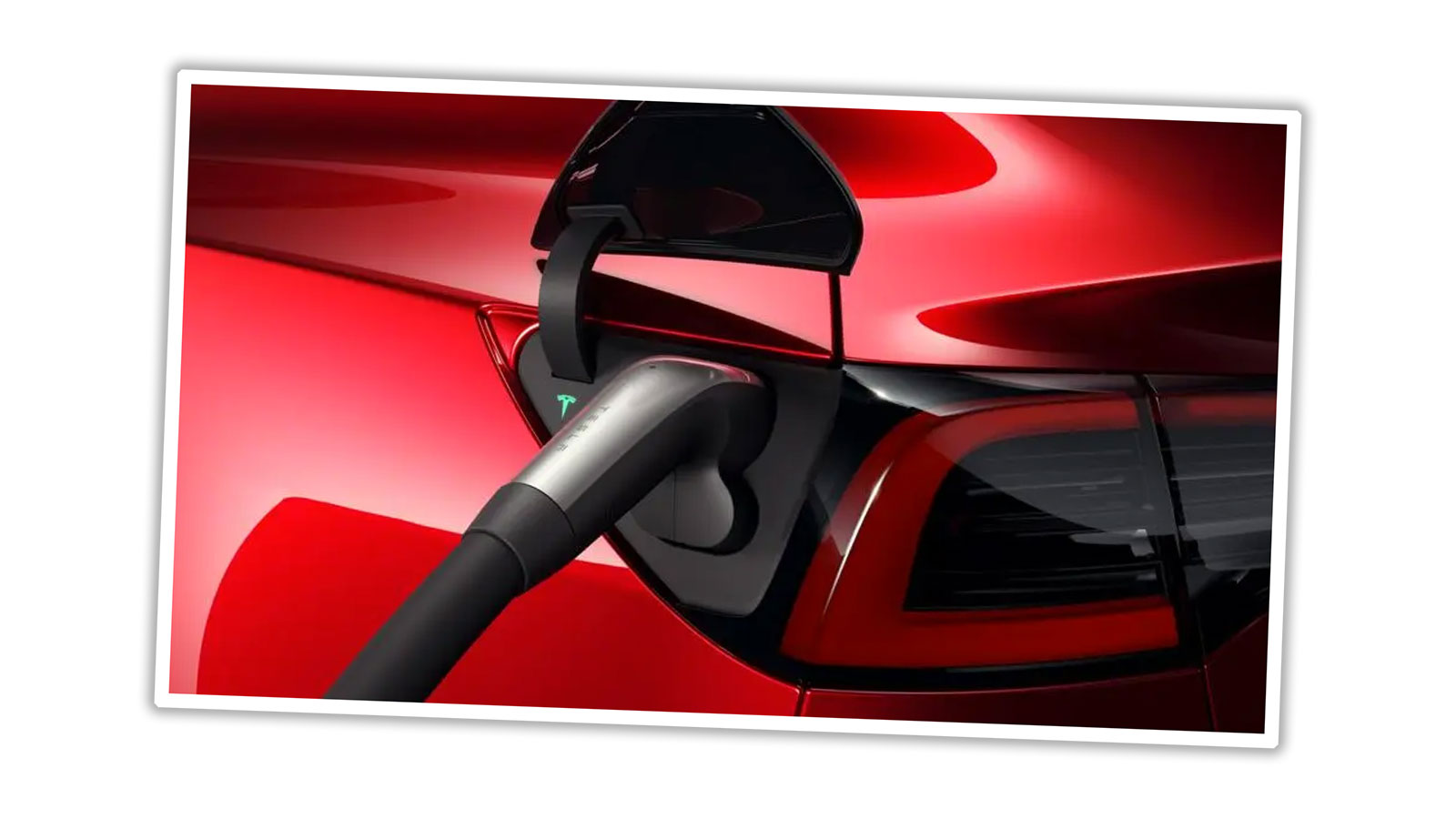 Same basic concept, really, just probably a good bit safer, since it’s all electricity in there, anyway. It’d be sort of analogous to if gasoline cars had gasoline-fueled taillights, I suppose.

Modern fuel fillers are almost exclusively hidden behind boring body-colored doors, which makes looking back at these wonderful and playfully deceptive taillight fuel fillers all the more appealing. I’m not sure that going out of your way to make a crucial part of your car as invisible as possible is the smartest idea, but it sure as hell was fun, and, at least for a little while, lots of carmakers agreed.

I'm a co-founder of the Autopian, the site you're on RIGHT NOW! I'm here to talk to you about taillights until you cry and beg me to stop, which I absolutely will not. Sorry. Hug? Also, David's friend.
Read All My Posts »
PrevPreviousFord Has Big Plans For Cheaper Lithium Iron Phosphate Batteries
NextThe Survival Of ‘Sir Vival,’ The Strangest Safety Car Concept Ever, Now Rests in the Hands of the World’s Quirkiest Car MuseumNext