Facebook-f Twitter Instagram Rss
Menu
Menu
Home » Turn Signals In Rear Bumpers Are Just Bad, And That’s All There Is To It

Turn Signals In Rear Bumpers Are Just Bad, And That’s All There Is To It 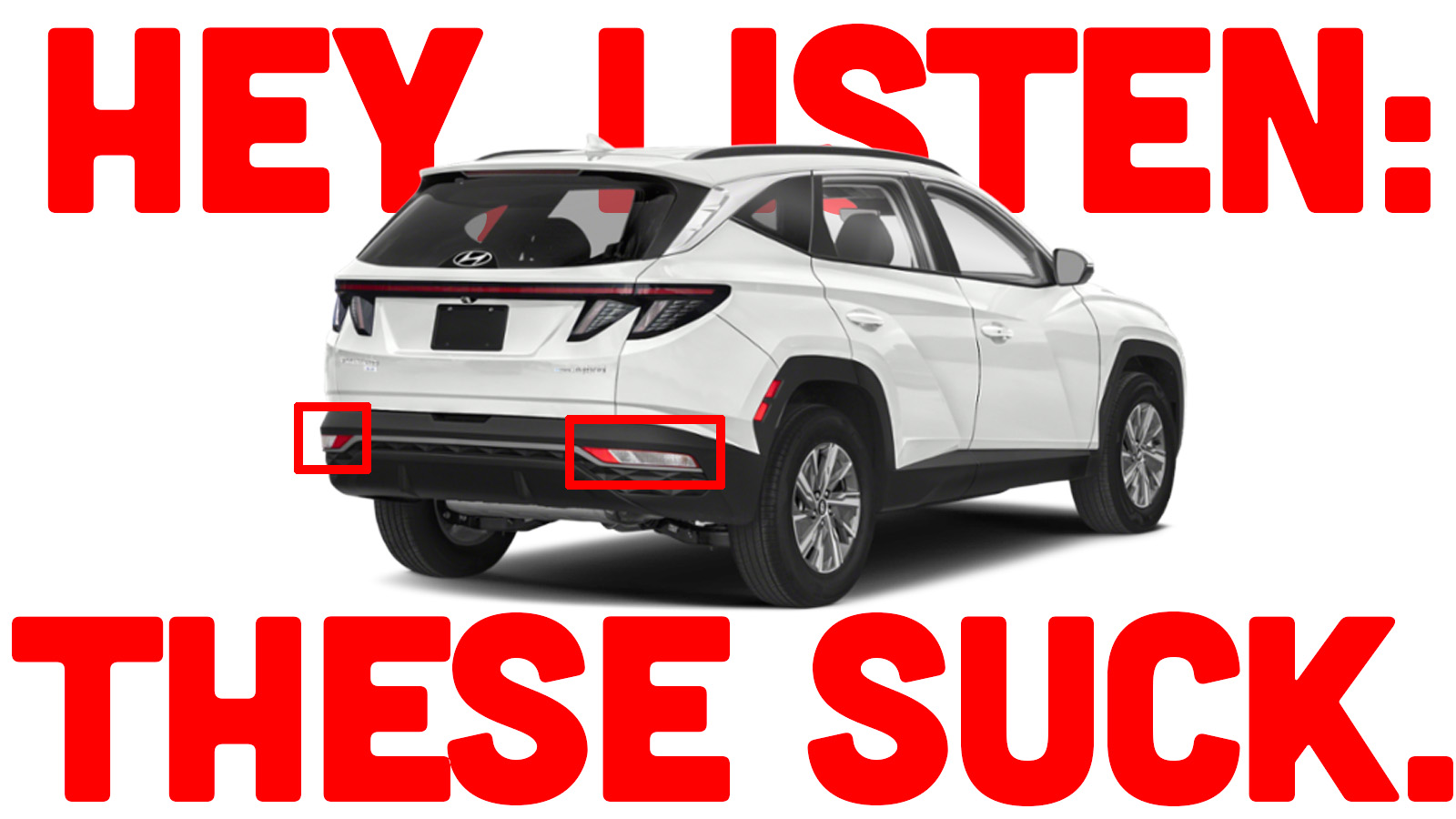 You’d think after all these years of interacting with turn indicators — this important and vital cooperation between humankind and flashing lights that goes back all the way to 1939 — we’d have it all figured out. And yet, right here, right now, smack dab in this eternally-fleeting present, we’re confronted with a certain turn signal design that is deeply, perhaps even tragically, flawed. I’m talking about in-bumper rear turn indicators, a phenomenon that I’m pretty sure precisely zero turn-signal operators like. In fact, at most of the taillight bars I’ve been to recently, anyone showing up with such a setup would be pantsed, vigorously and with undeniable glee. Let’s look at this stupid design choice, figure out why it exists, and complain about it, lavishly and loudly.

In case you’re somehow unaware of the tragedy about which I now speak, here’s an example of a car with bumper-mounted indicators: 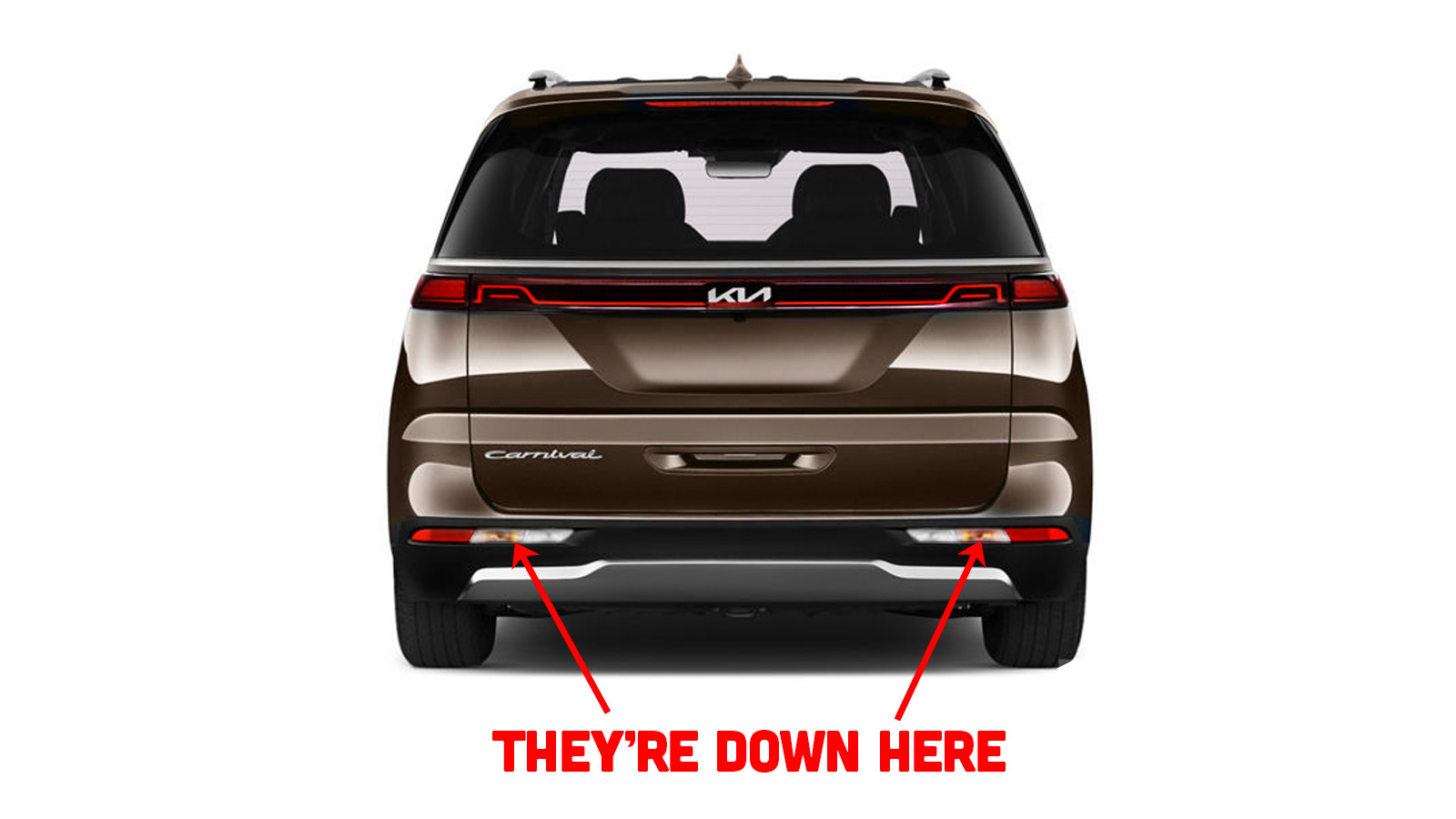 Pretty straightforward, right? All the normal taillight elements are in place, it’s just that some of them have been re-located down to the bottom floor, on the bumper.

It’s not immediately clear why such a decision would be made, of course, because there are already parts of the taillights in the more expected location up on the beltline of the car, too. That division between having a set of upper taillights that look like they should do everything but actually don’t, and a lower set that handles some of the functions is one of the big flaws in this taillight setup. It’s confusing. 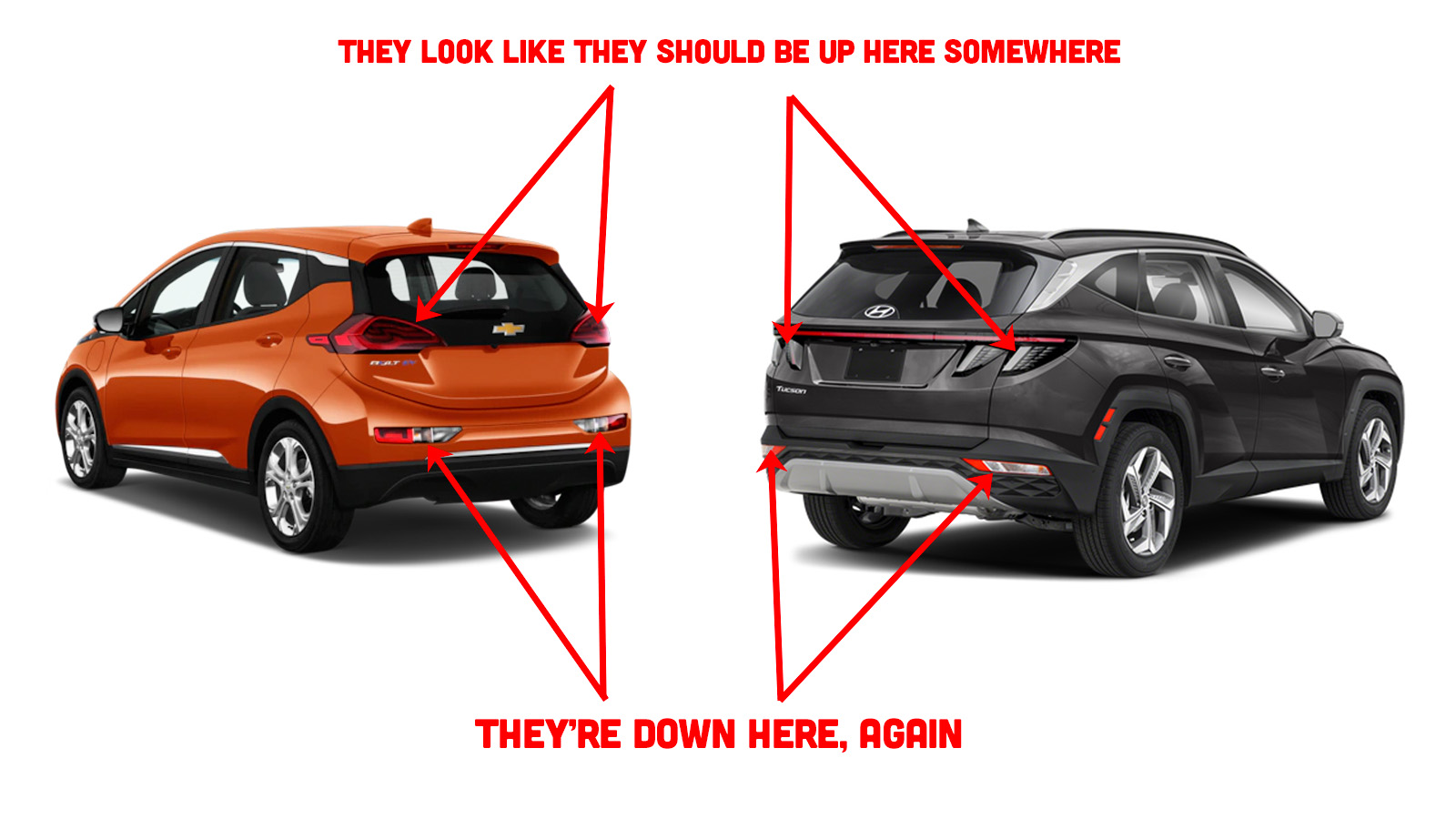 It helps to know where to expect to see taillights, so you can be ready for the important information they need to convey, often on very short notice. That’s part of why the bumper-indicators suck; you’re always looking for them in the wrong place.

Some older bumper taillights, like on 1980s Chevy Malibu wagons and El Caminos, were less of a problem because the entire taillight was set into the rear bumper: 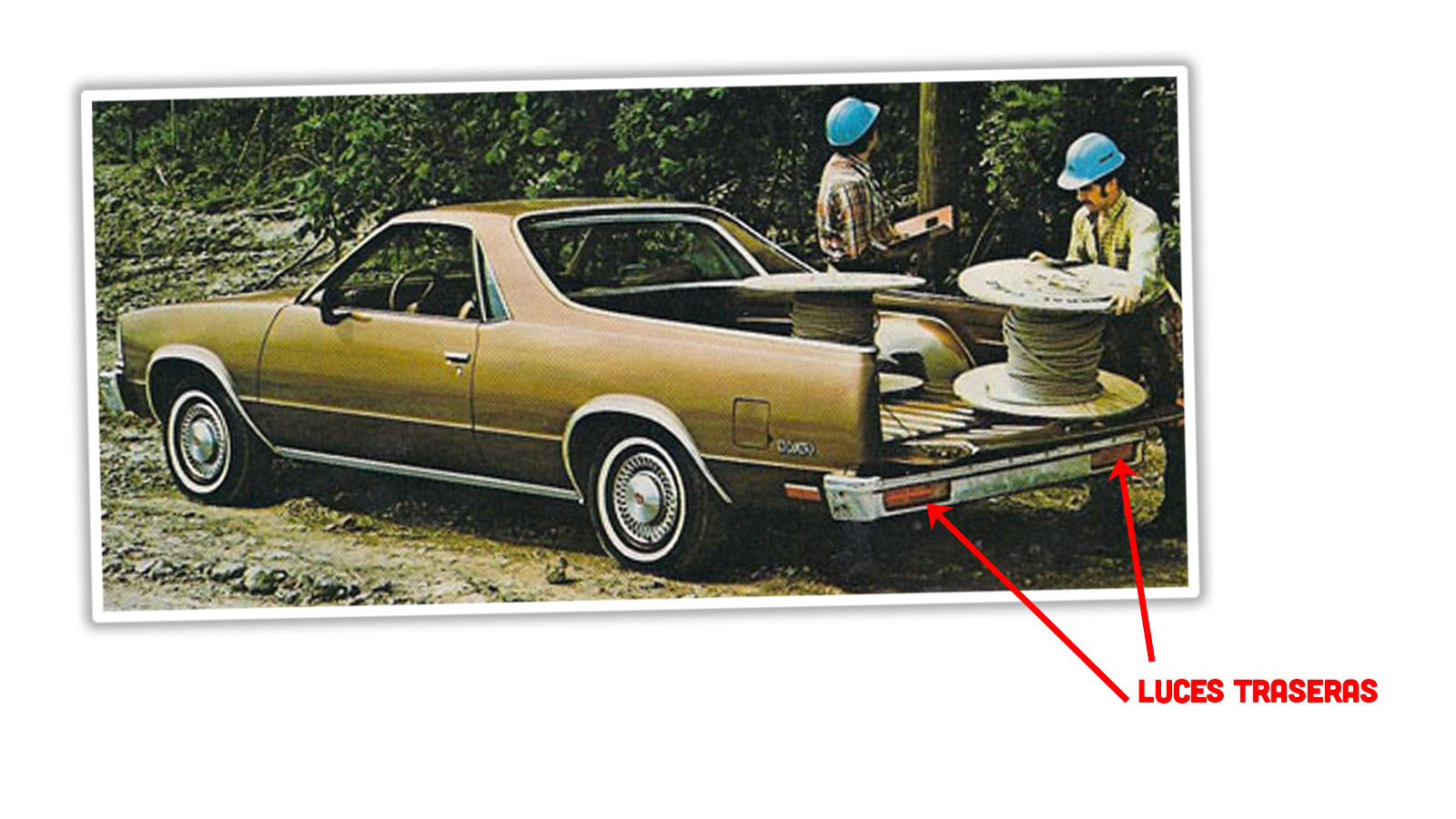 Sure, they were really vulnerable to damage because they’re set into the part of the car designed to smack into things/be smacked into, which is still a baffling issue on the modern designs, but at least you wouldn’t be confused as to where to look, because they were the only taillights on the back of the car or truck. Also, in the case of the El Camino there, they became pretty invisible with that tailgate down.

So, if they’re confusing and vulnerable to damage, why put them on the bumper at all? The reason why this happens can be best explained visually: 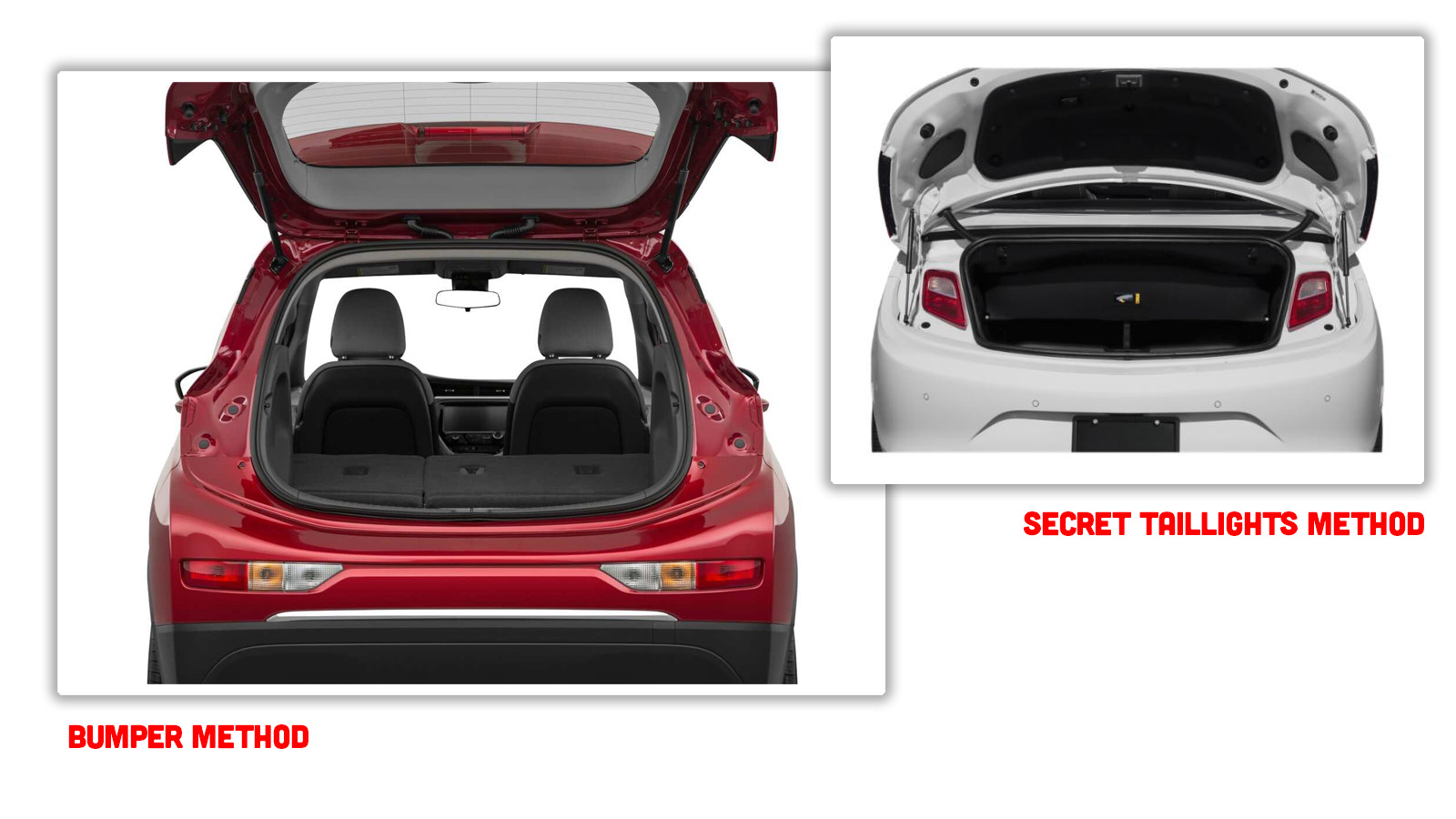 The bumper-mounted indicators are simply a way to allow for taillights to be visible even when driving with a tailgate or trunk lid open. By law, the brake, turn indicator, and the rear position light (you know, the basic taillight), must be visible even when things are open. There are three ways to deal with this: design trunk lids or hatches that do not include the taillight assemblies (the most common way), stick the crucial functions on the bumper, or add an extra set of little taillights inside the trunk or hatch.

The secret taillights method is by far the most fun an exciting, treating you to a surprise extra set of lights that get revealed when the trunk or hatch is opened, and that’s always a treat. But, this method is expensive. So, if you want to be cheap and yet still have a trunk lid or tailgate that takes up the full width of the rear, all you can really do is locate – or, significantly, duplicate, like the Audi Q5 does, so it only relies on the bumper lights when the hatch is open. Here, look:

That’s a reasonable compromise. Unfortunately, most of the cars with bumper indicators today, like the Chevy Bolt and a genuinely alarming number of otherwise excellent Hyundai-Kia designs, don’t do this. The indicators are just there, down low. And that’s a problem, especially in modern traffic.

Why’s that? Well, perhaps this little conversation I had with Autopian contributor Emily Velasco will help: 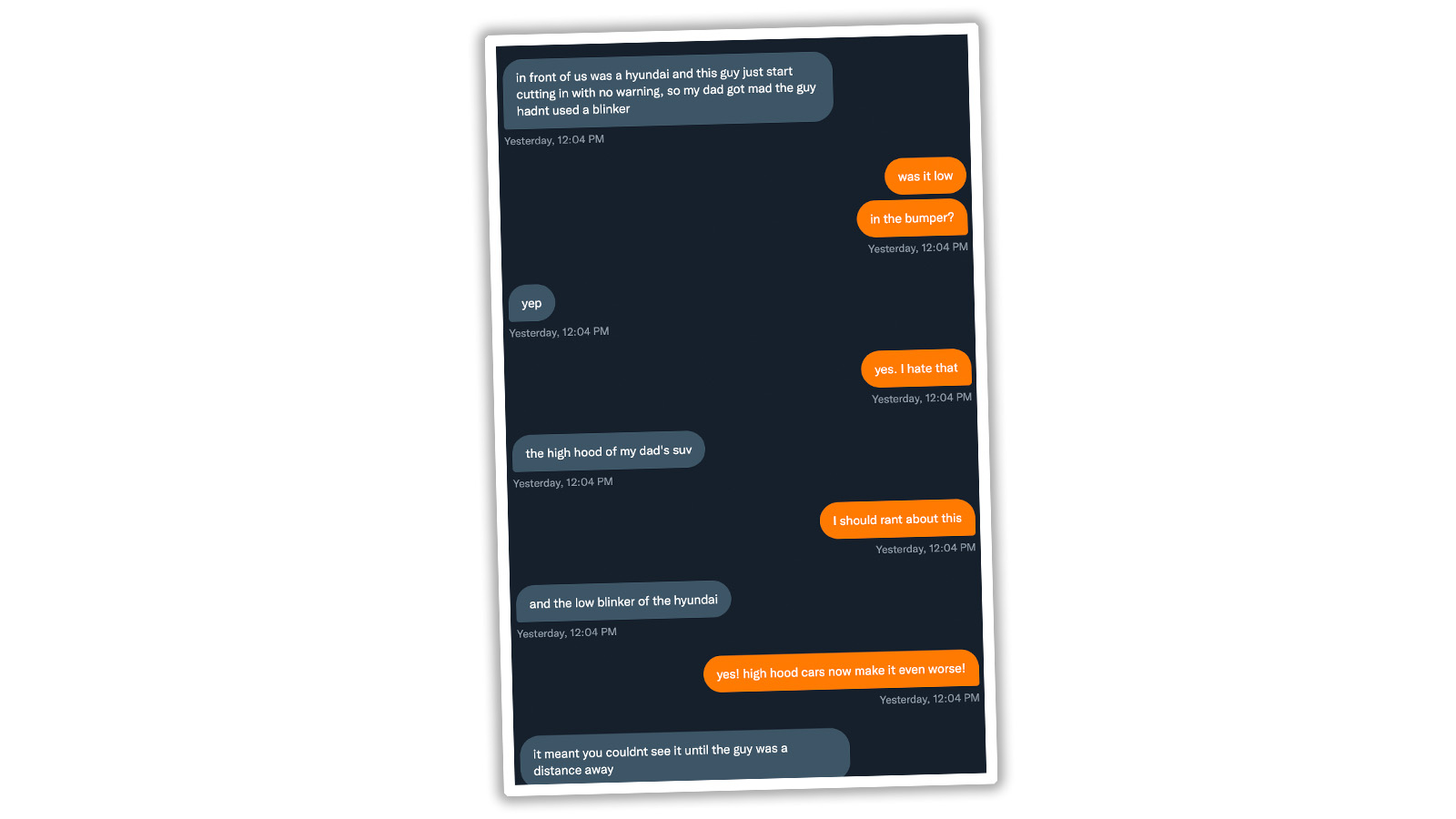 Okay, if that’s too small to read, it basically tells a gripping tale of how Emily’s dad was fuming about some jackass in front of him not using his blinker. As I guessed immediately, it was a bumper-mounted indicator, and in Emily’s dad’s Toyota Highlander, he simply could not see the indicators at all over the tall hood. With so many trucks and SUVs on the roads today, I’m pretty certain Emily’s dad is not alone: bumper indicators are too damn hard to see. 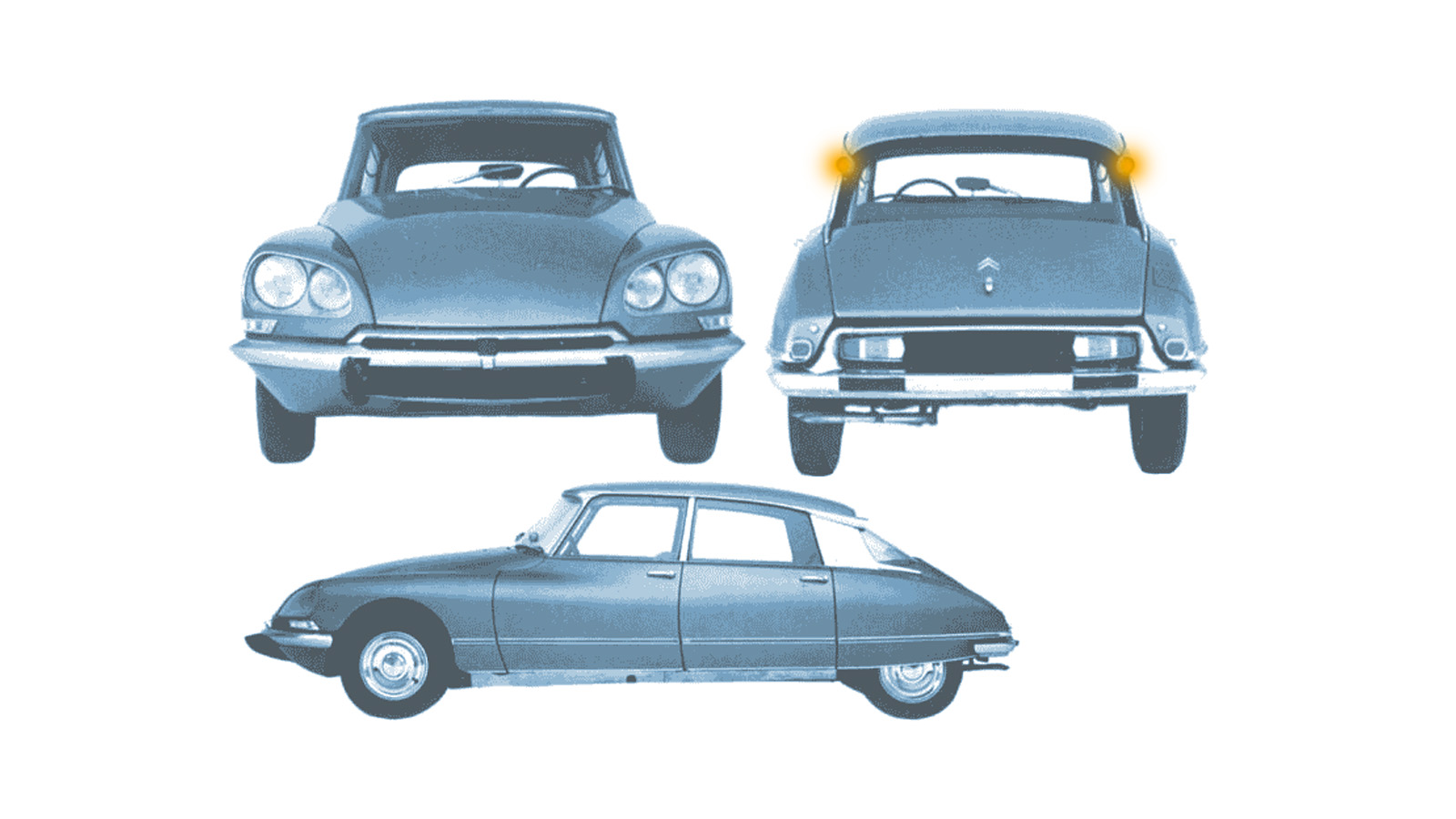 They’re in a confusing location, and they’re invisible in traffic behind the wheel of so very many SUVs and trucks. That’s a safety problem, and there’s no reason we need to stand for it. It’s been known that mounting turn indicators high, where eyes are, is a good idea; Citroën did it (albeit for interesting reasons) back in the 1950s! And, we all decided that high-mounted brake lights are important, hence the Center High-Mount Stop Light (CHMSL) laws.

So why should we have to deal with dangerous and stupid bumper-mounted indicators? The answer is we shouldn’t. We can make our preferences known to auto designers with a variety of methods, from a directed email campaign and online petitions to chaining yourself to Hyundai-Kia’s design offices and threatening to set yourself on fire, screaming, until your needs are met.

I'm a co-founder of the Autopian, the site you're on RIGHT NOW! I'm here to talk to you about taillights until you cry and beg me to stop, which I absolutely will not. Sorry. Hug? Also, David's friend.
Read All My Posts »
PrevPreviousNissan Is Reportedly Considering A Small EV Pickup Truck And That Sounds Like An Excellent Idea
NextI Think Facebook Marketplace Is Starting To Take My SanityNext