Carmakers have been comparing their products to competing products ever since there have been more than one car to buy. It’s just how it works. And, of course, no one expects one company to go out of their way to be sure that both cars get an equal and fair shake, because why the hell would they? All of these comparisons are fixed, there’s a winner in mind from the get-go, because that’s how the world works, friends. This 1959 filmstrip – yes, filmstrip, as in no actual moving pictures, unless you count a frame rate of 1 frame per minute or so – from Ford is a great example of this, because this isn’t ever meant to really be a comparison between the Ford Falcon and the Chevrolet Corvair – it’s Ford shitting on the Corvair for 20 minutes. Because why else would they make it? Parts of it are also enjoyably catty, too.

Before we dig into this a bit, let’s just take a moment to look at the two main characters here: the Falcon and the Corvair. Both were entries in the relatively new compact car segment, but the two cars really couldn’t have been more different. The Falcon was an extremely conventional car design, essentially a scaled-down Ford Galaxie. It used an inline-six making about 95 horsepower driving the rear wheels, a unibody with coil spring suspension up front and old-school leaf springs on a live axle in back. The design and engineering was absolutely by the book for the era. 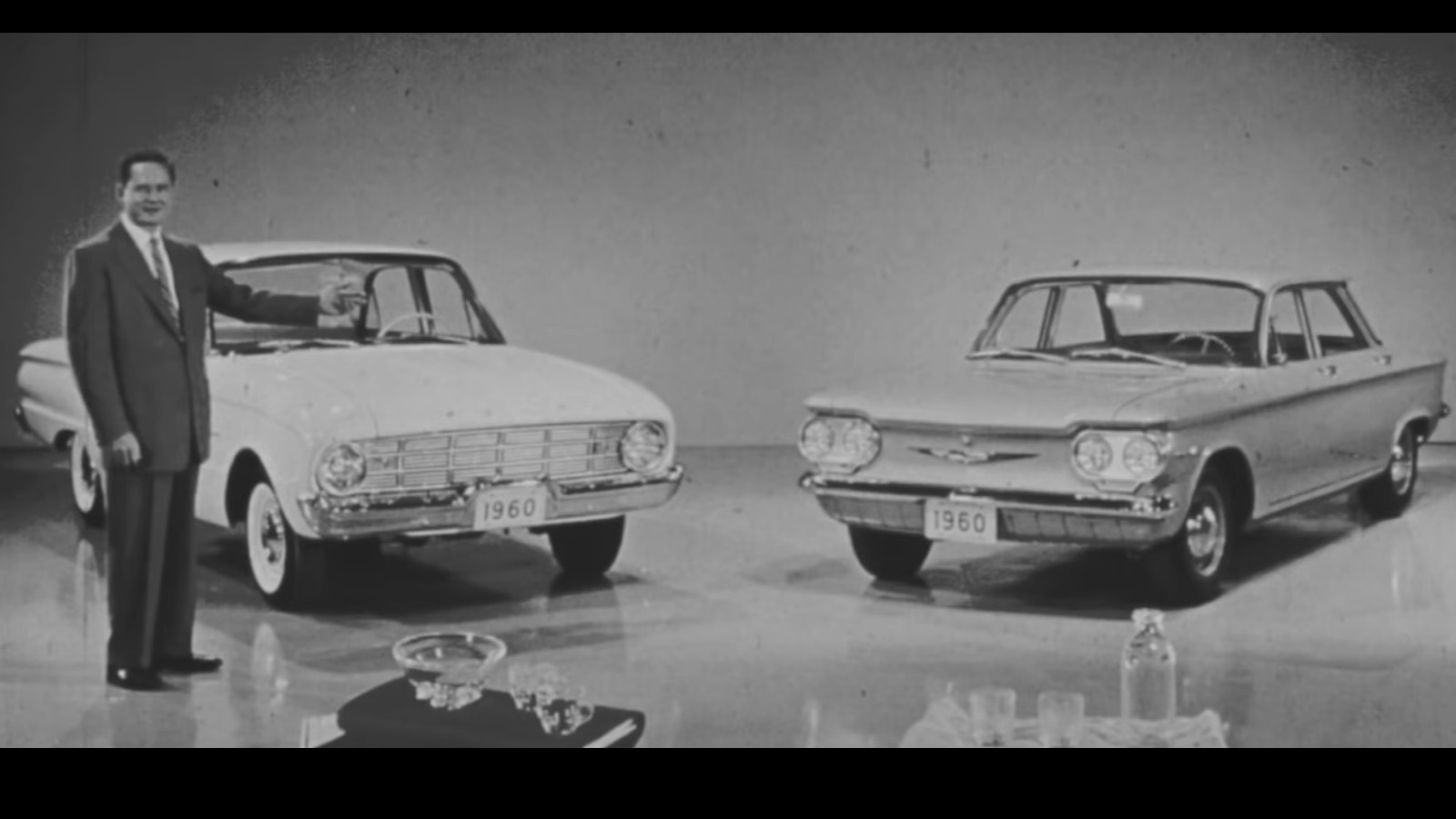 The Corvair was at the other extreme. Inspired by the increasingly-popular Volkswagen Beetle, GM went for a very radical design for an American car, with an aluminum 80 hp air-cooled flat-six engine at the rear, fully independent suspension, a unibody design with clean styling: this was all a significant departure from the norm.

The Corvair’s engineering was unfamiliar to most Americans, and Ford played this up in this filmstrip, and even did make one very valid point that would become a huge issue for the Corvair later: its requirement to have different tire pressures front and rear to compensate for tail-heavy handling most Americans would not be familiar with at all, which would be the key factor in the whole Ralph Nader, Unsafe at Any Speed business.

Enough talk for the moment, here’s the filmstrip so you can see for yourself:

Right off the bat, you can see how Ford is going to play this, as they talk about how it’s unfair to compare “fine broadcloth” to “burlap sacking,” or “excellent crystalware” to “jelly glasses or milk bottles.” It’s pretty clear which car they think is the broadcloth and which they think is the burlap, but let’s be honest: both of these cars were denim. 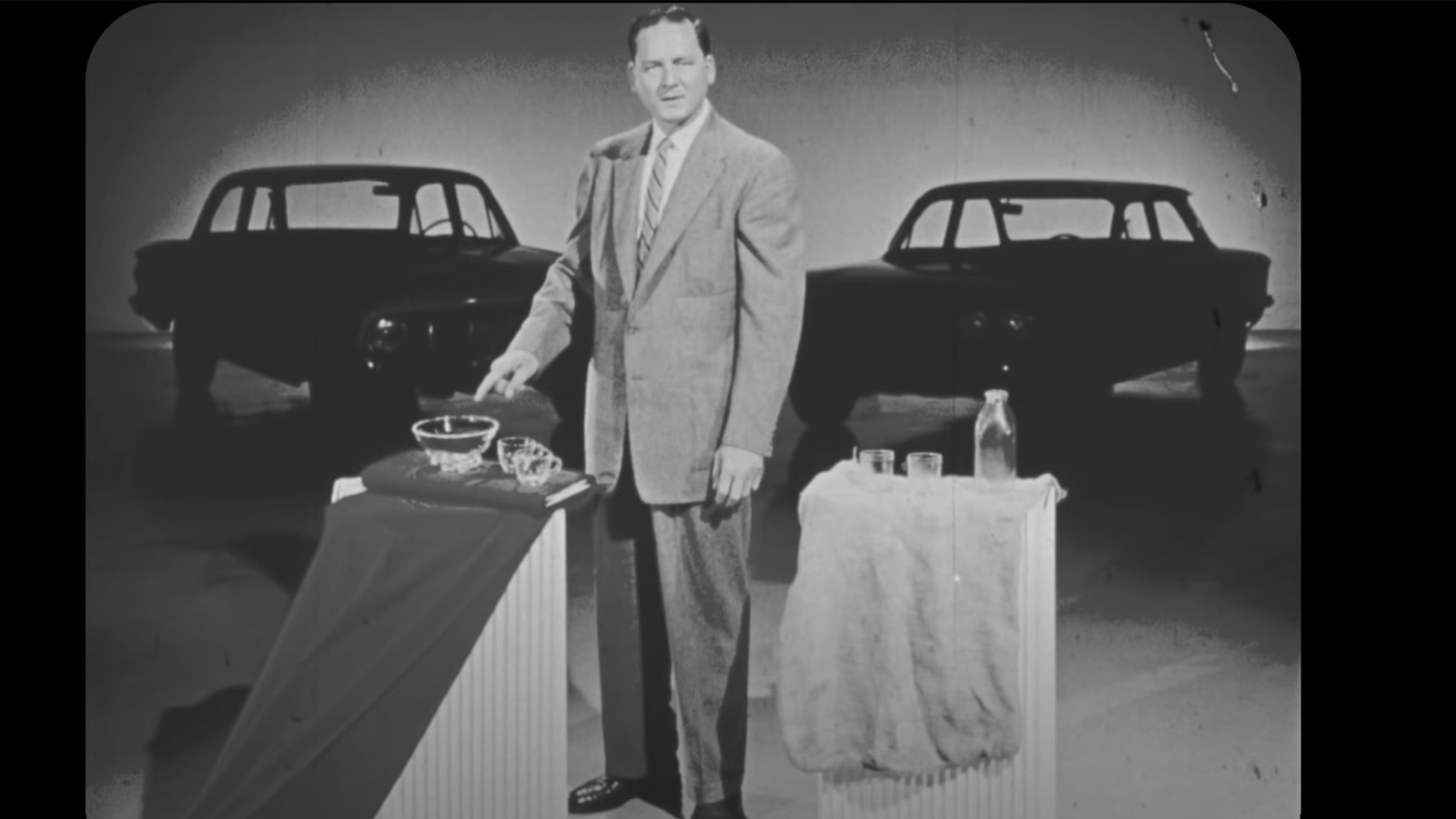 A lot of Ford’s points are reasonable; sure, the Corvair’s bumpers are thinner than the Falcon’s, but it’s not like either of these things wasn’t a deathtrap in a wreck. Also, Ford’s point that the Corvair’s painted metal front end would be “probably” subject to more damage from flying stones is funny to me, because I’ve seen many old Falcons, and the stamped sheet metal Ford used for the grille always seemed a bit thin and most of them always seemed to be banged up. 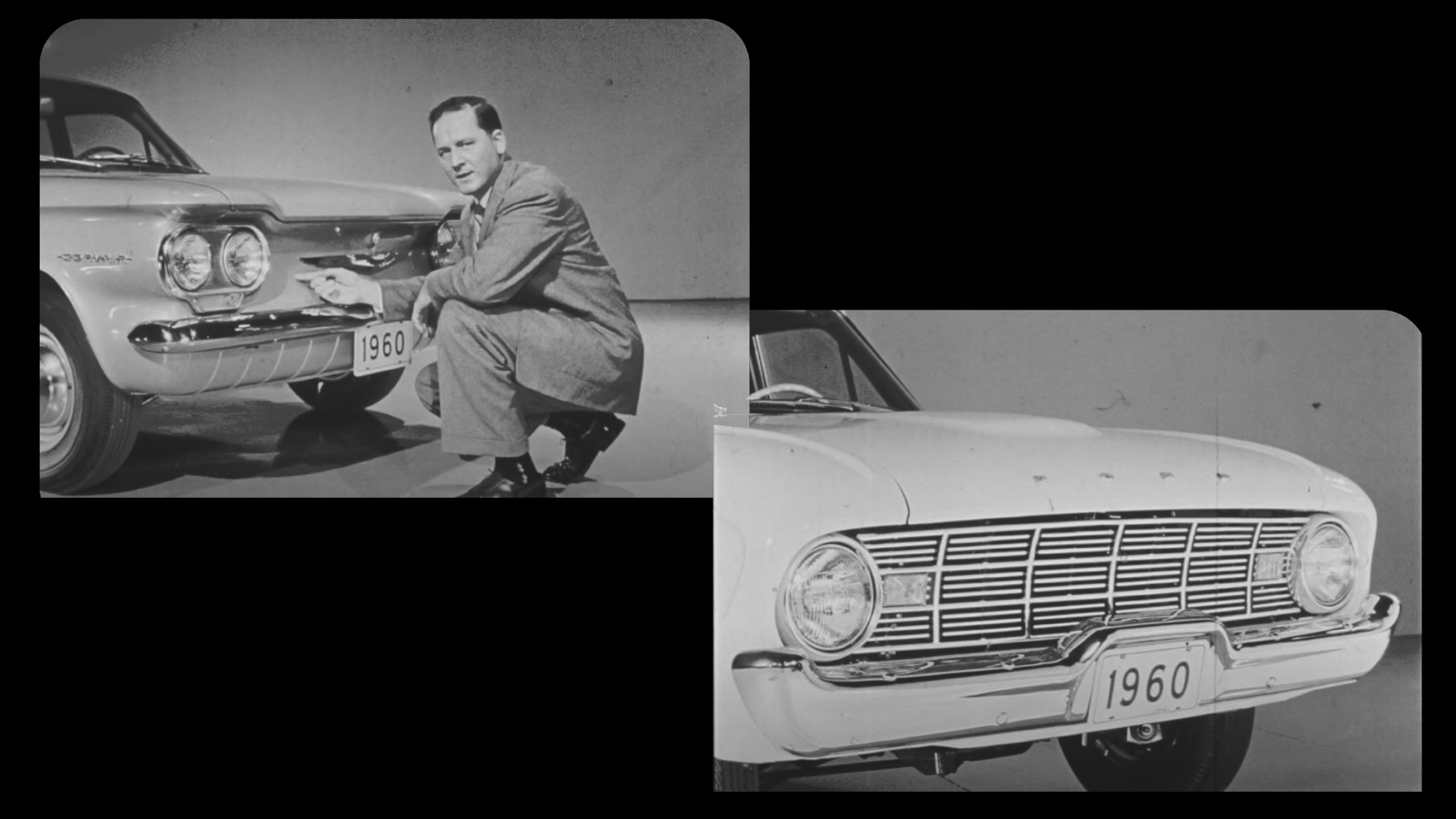 This point is incredible, too, especially from our modern perspective: 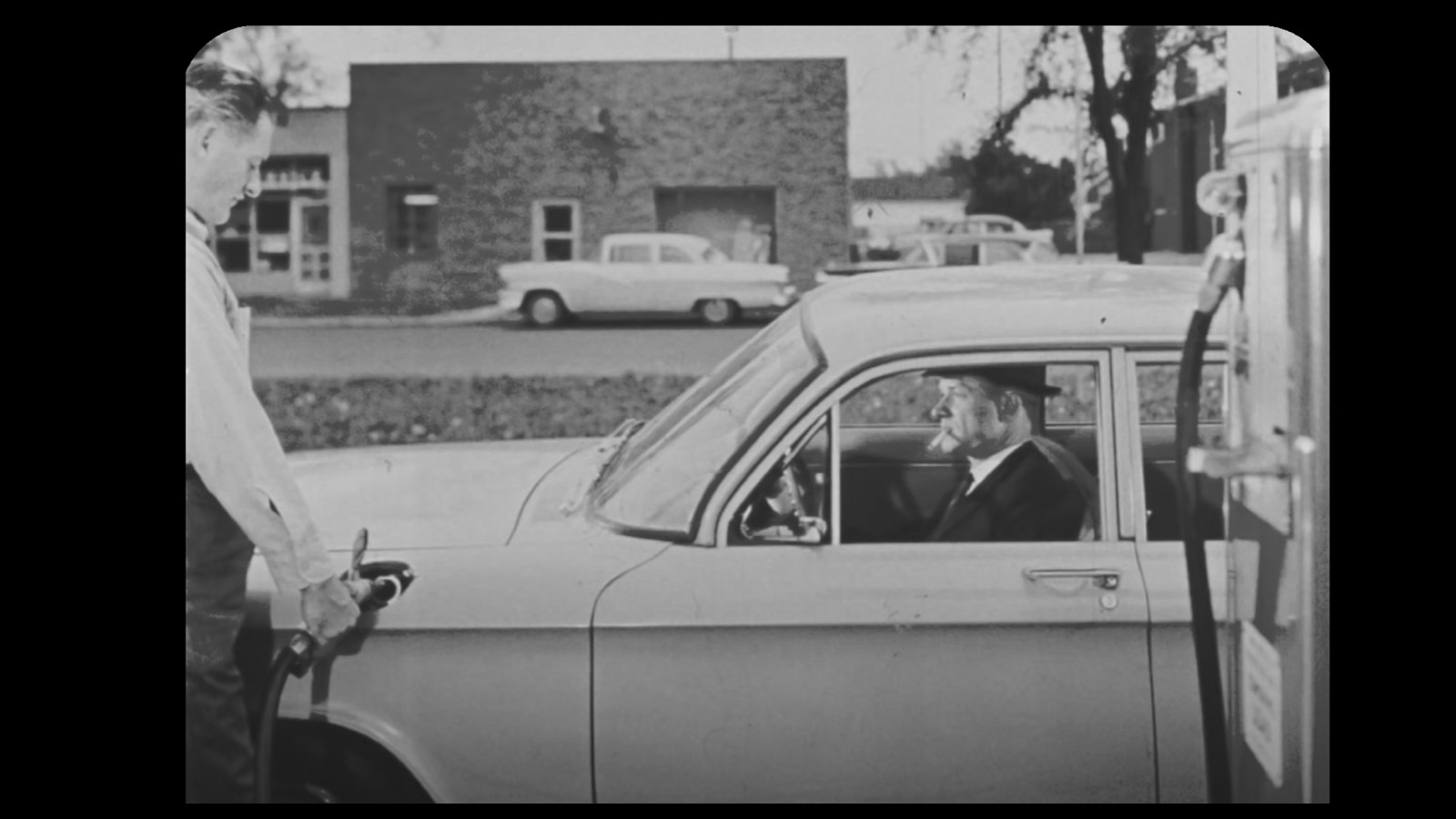 Here, they’re warning that smoking while getting your car filled with gas might, just might, be a bad idea, but only in the Corvair, because the gas filler is in front of you instead of behind you. Not smoking at all while filling up with gas is not mentioned, because what are we, animals? Not smoking anything? Please. 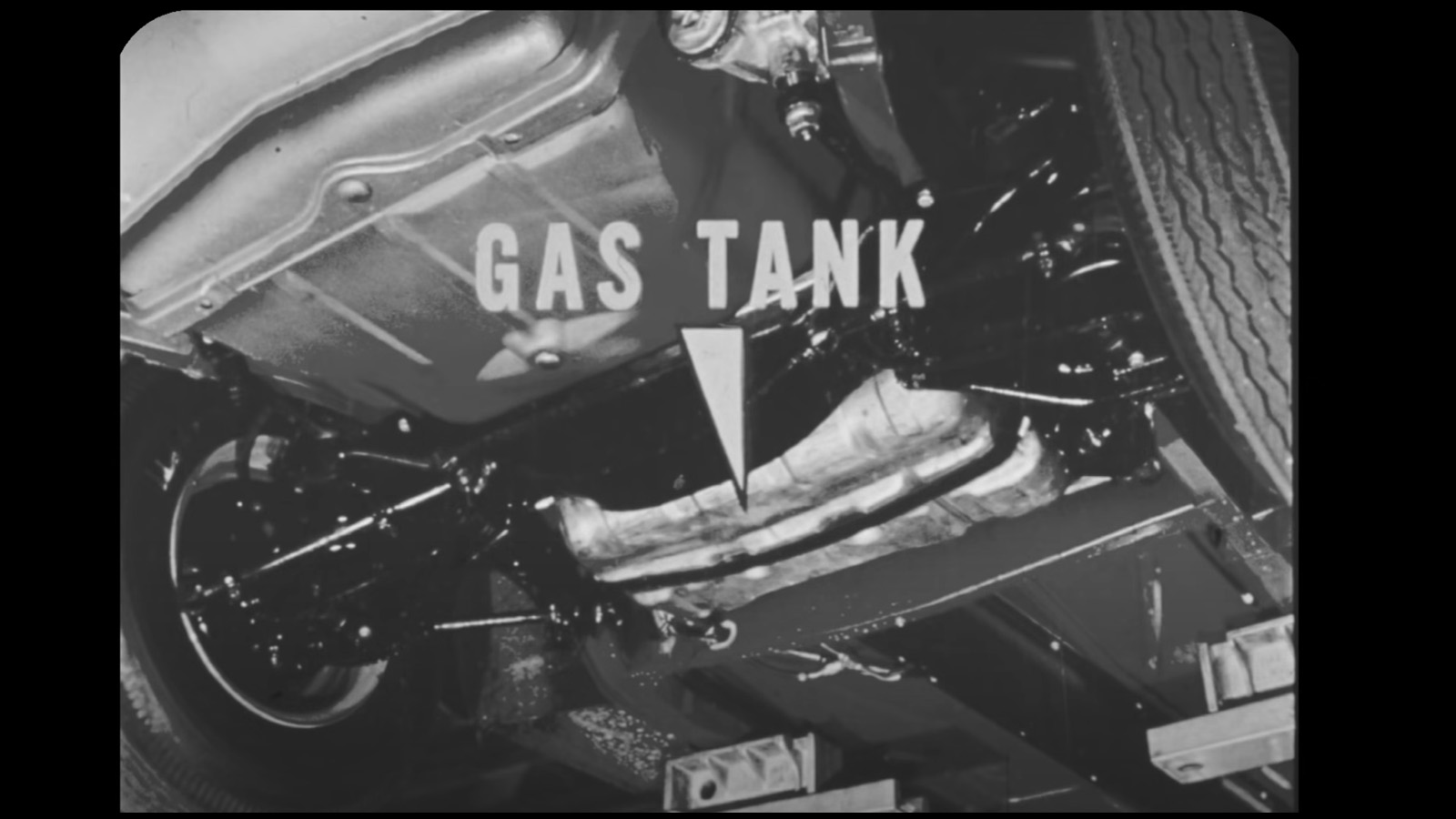 The point Ford makes about the Corvair’s supposedly impact-vulnerable gas tank is interesting, because their worry here is very close to the issue Ford would have with the Pinto about a decade or so later. Foreshadowing! 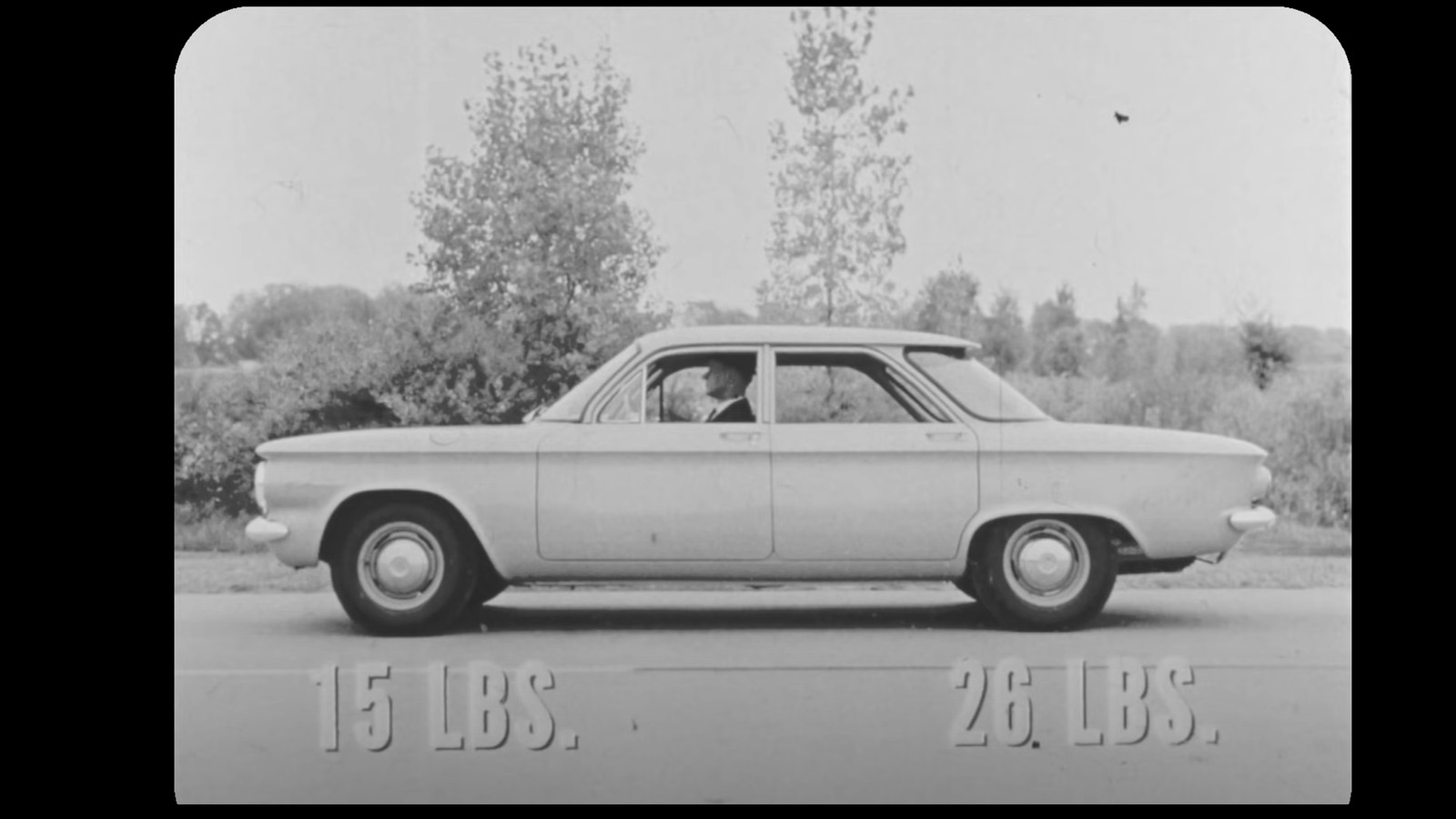 The tire pressure complaint is totally valid, though. People aren’t great at maintaining tire pressure, let alone different values front and rear, and this could cause significant handling issues. This is the thing Ford should have focused on, the significant oversteering issues that can happen if the Corvair’s tire pressure setup isn’t just right.

Instead, the filmstrip goes on to berate the Corvair’s cardboard-based door panels and calls the Corvair’s luggage well behind the back seat a “dust catcher” and tries to raise a lot of questions about the air-cooled, twin-carb motor. While some of the comparisons and complaints are valid, a lot of this has a really peculiar petty feeling to it.

Ford even got a little cartoonish for some of these, like their liberal use of what are clearly stink lines here: 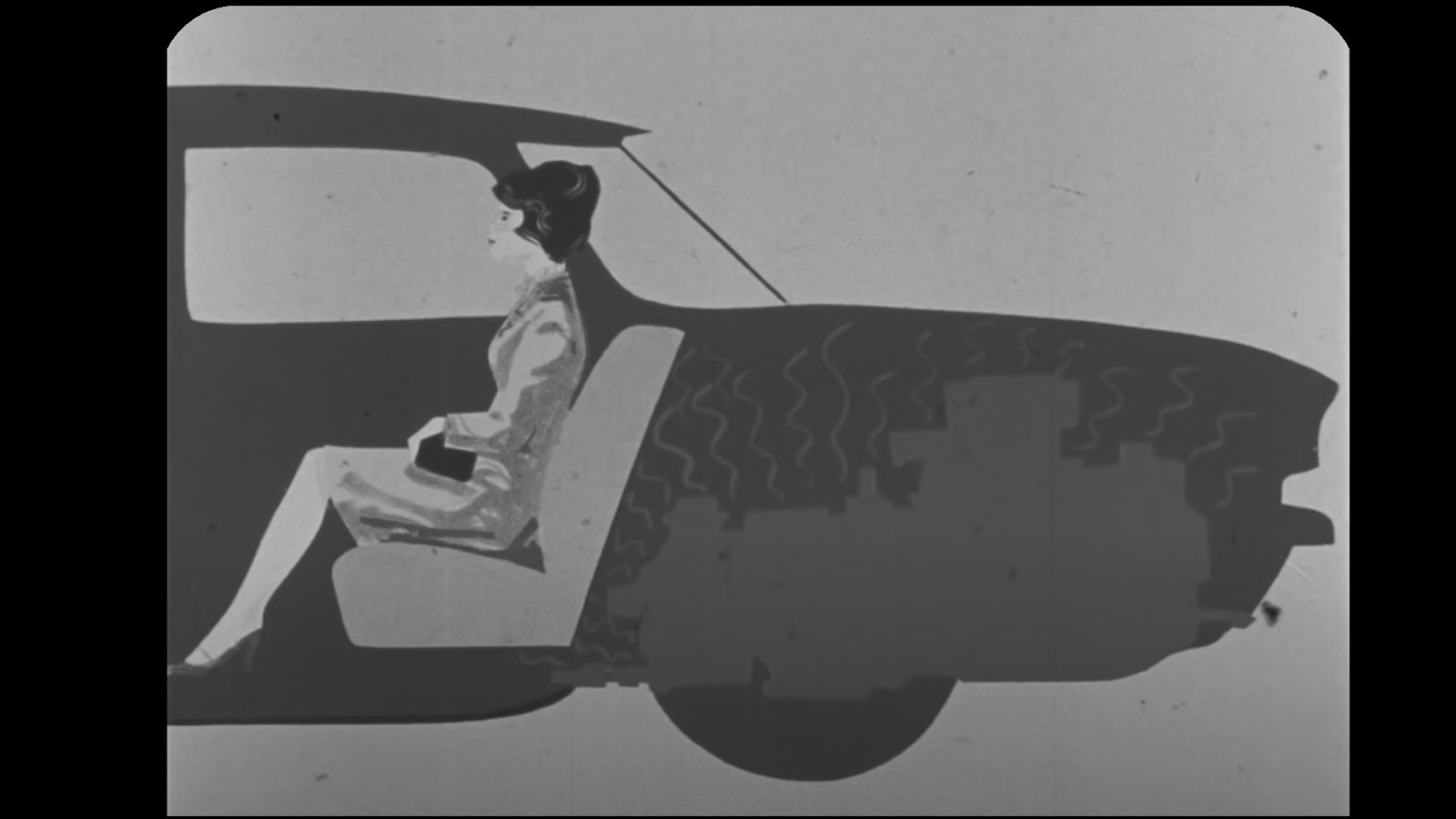 That’s supposed to show all the heat and fumes from the engine, though with the engine behind everything, I’d think this would all be less of an issue than the Falcon, which has an engine that makes heat and fumes, too, just right in front of everybody.

I especially like this very weirdly specific roast of the Corvair: 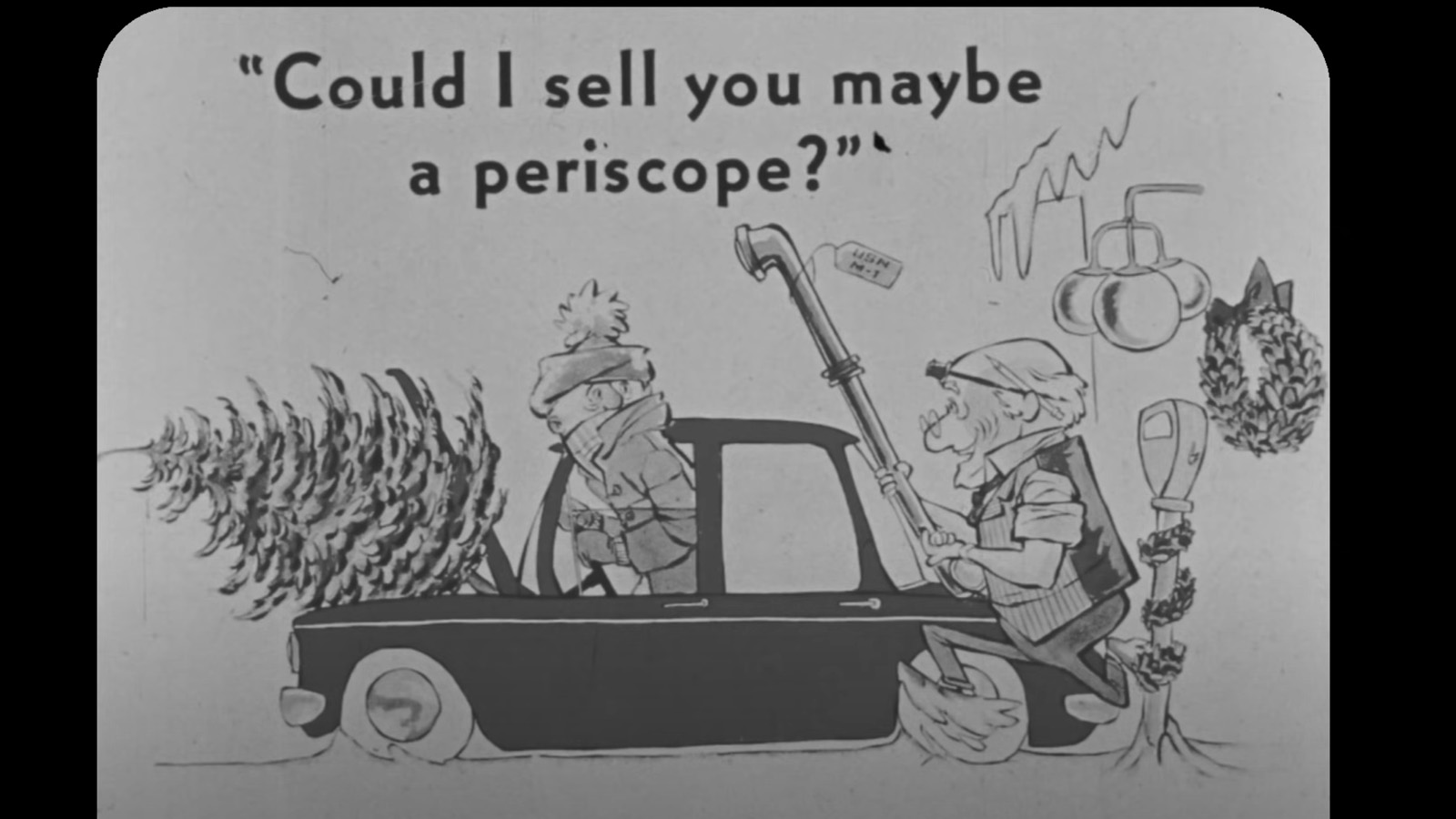 The huge problem of driving with a Christmas tree in your trunk. How would you see around it? A periscope! Oh, Ford! You got ’em! Does Ford not think that most people tie Christmas trees on car roofs? Who jams a tree in their trunk? Everyone puts them on roofs! It’s an iconic visual of the holiday season!

I just found this whole filmstrip fascinating, and while I may have some Corvair bias, you can’t tell me that Ford isn’t seeming just a little petty here. But, that’s their job! Sell Falcons! I can’t blame them for that.

I'm a co-founder of the Autopian, the site you're on RIGHT NOW! I'm here to talk to you about taillights until you cry and beg me to stop, which I absolutely will not. Sorry. Hug? Also, David's friend.
Read All My Posts »
PrevPreviousThe Aston Martin DBR22 Is Here To Pack Aristocrats’ Nostrils Full Of Mosquitoes
NextCar Enthusiast Finds Heartwarming Note On Rusty MercedesNext