“60 for 60” is the name of the absurd promotion Detroit-area junkyard “U.S. Auto” runs every year. The rules are simple: No matter which car parts, if you can carry them 60 feet, you can buy them for just $60. Many wrenchers — keen to save a bundle of money — try carrying absurdly heavy contraptions: everything from entire engines to transmissions to transfer cases. One man even carried an entire 500 pound heavy-duty axle. Watch in awe as this madness unfolds.

My go-to junkyard is U.S. Auto in Sterling Heights, Michigan. Standing on the grounds of the famous defunct “Warhoops” salvage yard, the place is always filled to the brim with classics. Plus, it’s fairly clean, and, most importantly, it’s right up the street from my compoun…er, house. Anyway, a while back the company held its annual “60 for 60” sale, and I figured I’d record the whole thing because it’s absolutely absurd:

Jeremy Benson, the guy carrying the General Motors Ecotec inline-four (found in Saturn Ions, Vues, Chevy Cobalts, Pontiac G6s, etc.) in the video above and picture below, is a legend. While preparing to haul his third engine of the day, Benson told me it was his fourth year participating in 60 for 60, and that he’s carried eight engines in total. That’s 480 feet of travel while lugging a 350 pound motor on his back. That’s a lot of work (Work equals force times distance, so I could probably calculate roughly exactly how much, but that’s probably not a great way to spend my time), but it saved him a total of over $2,000, since engines typically cost $325. Whether his chiropractor bill will offset those savings, we don’t know. But I hope not. 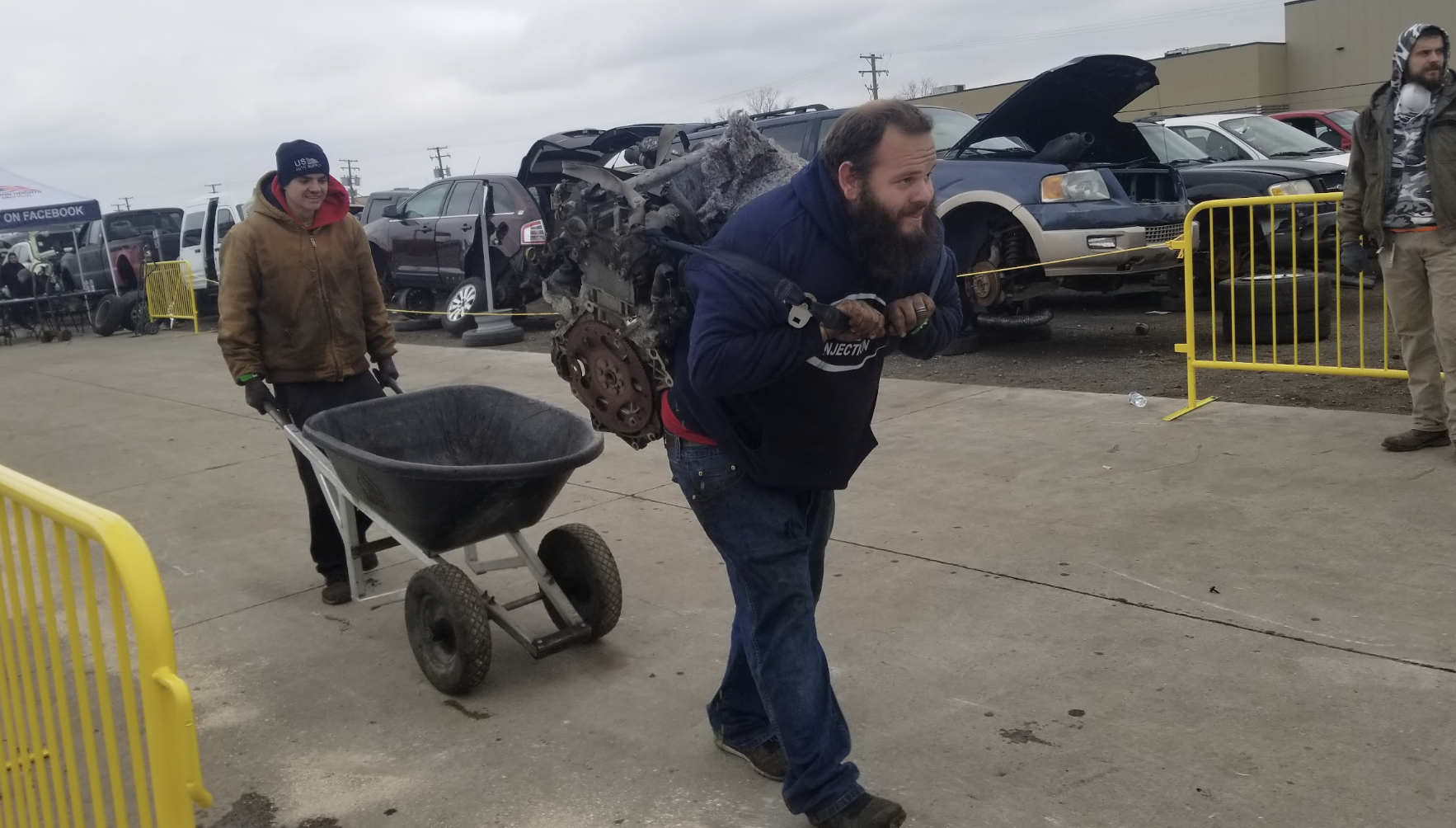 Jeremy explained how he uses a sawzall to cut cars up to free their engines, then he unbolts those engines from their transmissions and uses the junkyard’s pulley-style crane to drop each engine into a wheelbarrow. As for how he carries the motors, his strategy is the same as most folks’ at the 60 for 60 event in that it involves cutting off some seat belts and using them to carry the loot like a backpack.

To make sure the motor doesn’t cut into his spine, Jeremy shoves a piece of sound-deadening insulation between the engine and his back. 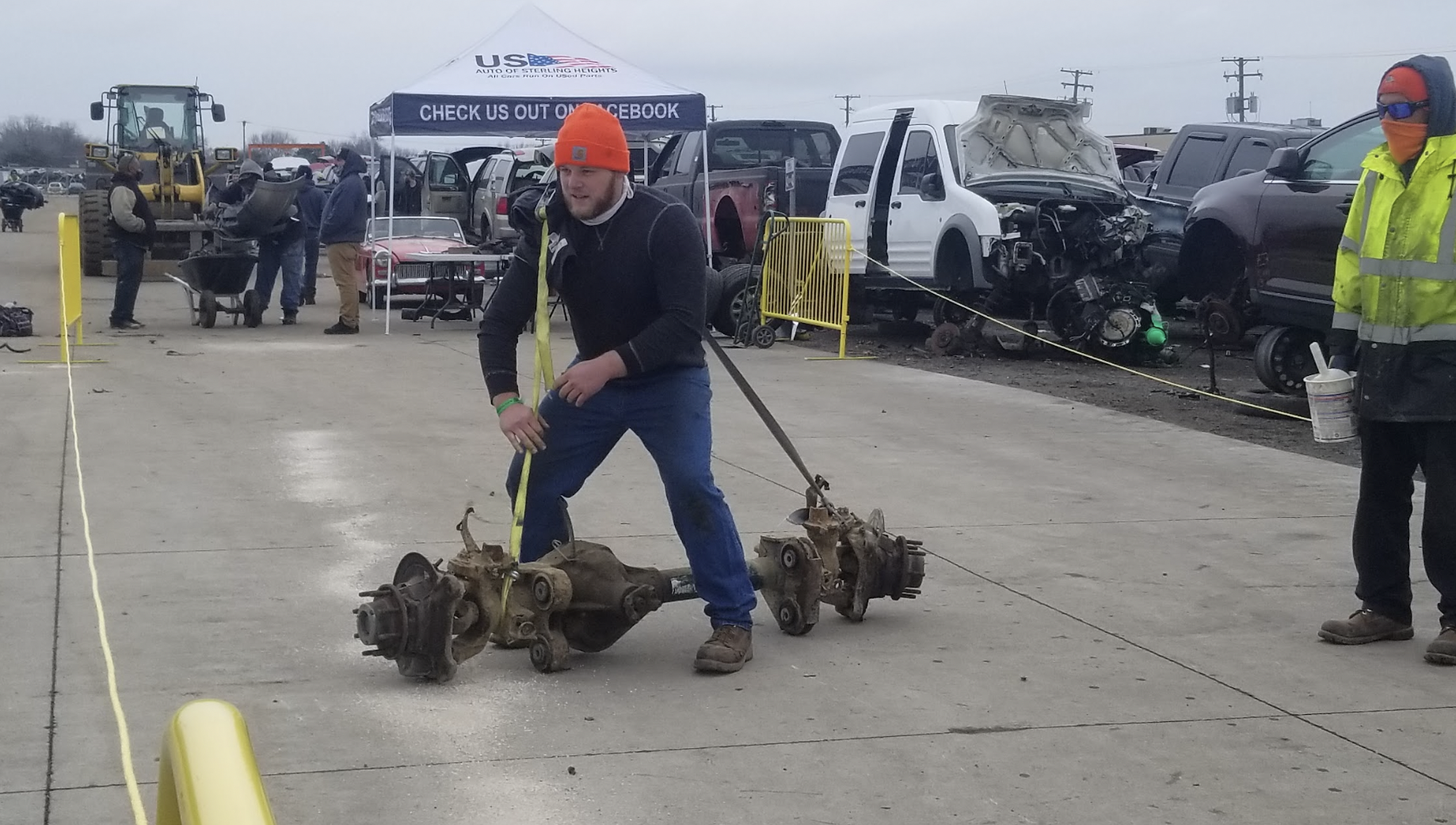 The heaviest load I saw any single person carry was the Ford F-250 axle shown in the images above and below. If my cursory internet search is right, this younger guy — whom I heard cutting this axle out of a truck using what sounded like a sawzall — put roughly 500 pounds on his back that day. 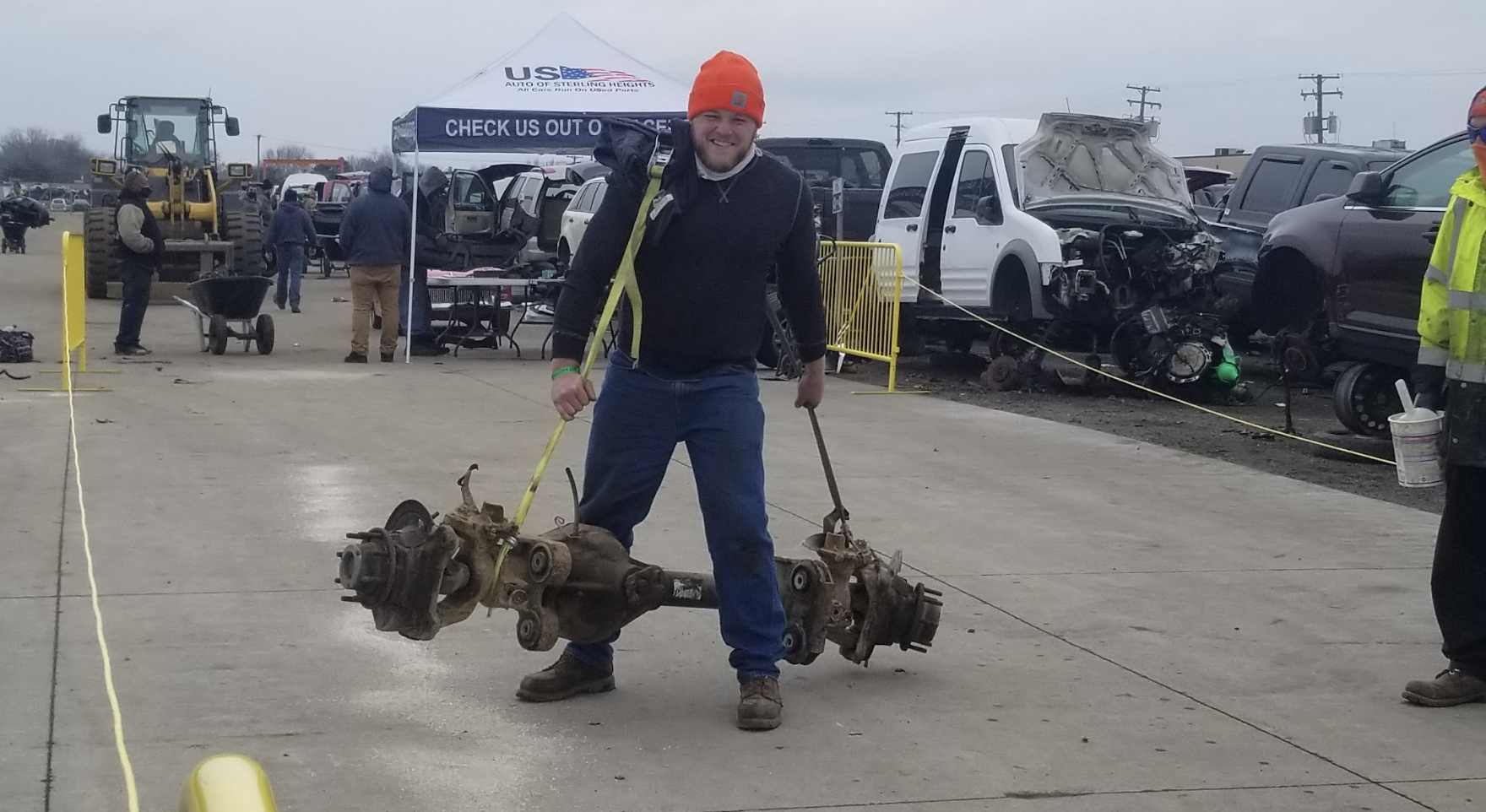 The man crouched down under the ratchet strap/seatbelt combo he had tied to the axle, and quickly stood up using his thigh muscles. The strap tightened, his rate of standing slowed almost to a halt. But he kept pushing with his legs until he had raised the axle off the ground.

Then, with one foot ahead of the axle and one behind, he hobbled forward, one tiny step at time. The man took a number of breaks, and I could see the strain in his face when he realized each break was over and that he wasn’t done carrying this 500 pound axle. Eventually, though, this strongman made it across the finish line and quickly fell to the ground to take a long breather: 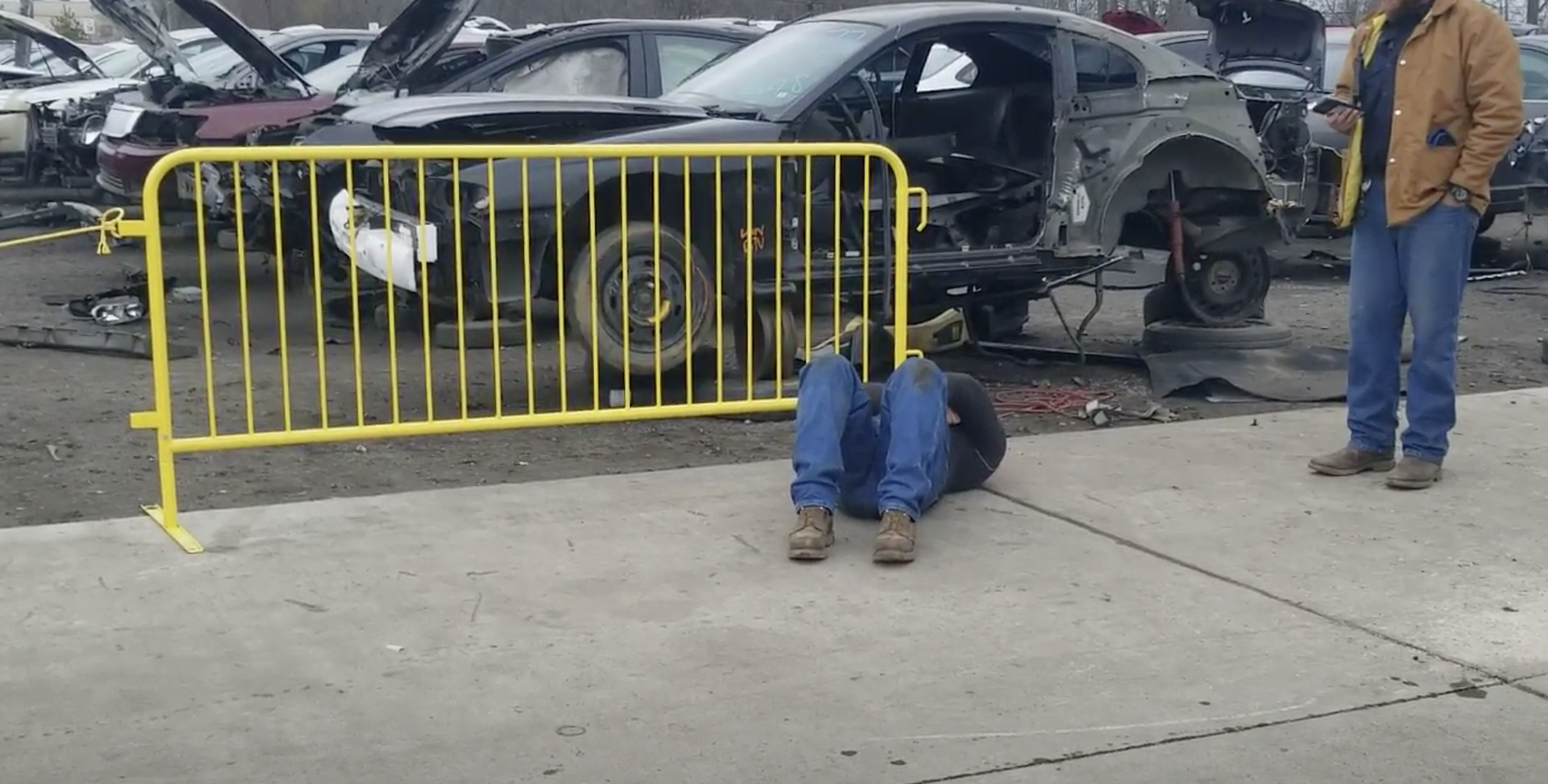 All of that work to save $125 (The typical axle price is $185). I don’t know if it was worth it for him, but it was incredibly entertaining for everyone looking on. 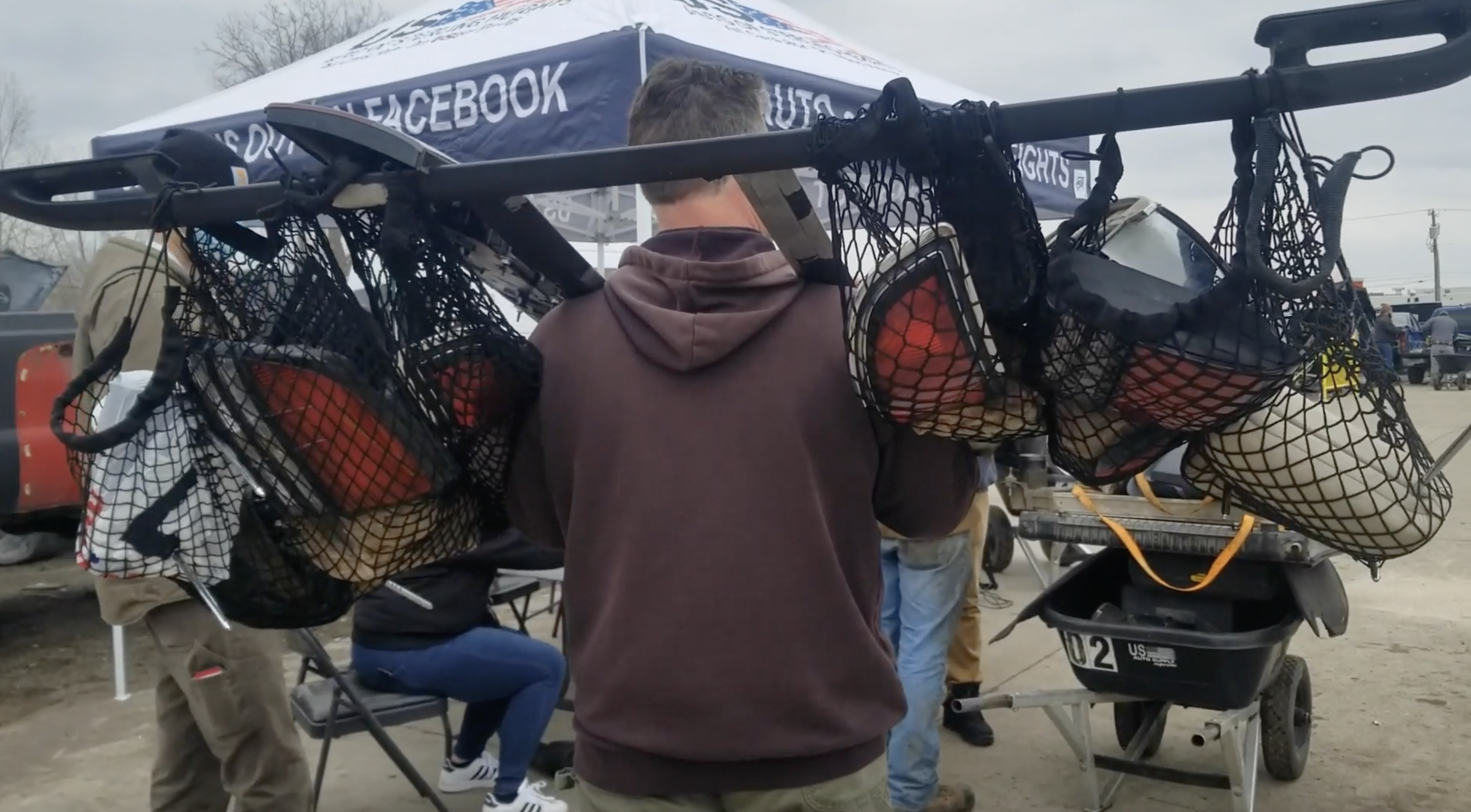 The guy above used a roof rack and some cargo nets to carry a bunch of lights and head restraints. The guy below took a very different strategy. He didn’t hook up any straps or make any sort of makeshift carrying-device — he just had his buddies stack parts into his arms. And many of these parts weren’t light; I mean, look at the steel rotors in his hands, and check out the two cylinder hands wedged into his elbows. I also see an alternator, caliper, muffler, shifter, and a whole lot more: 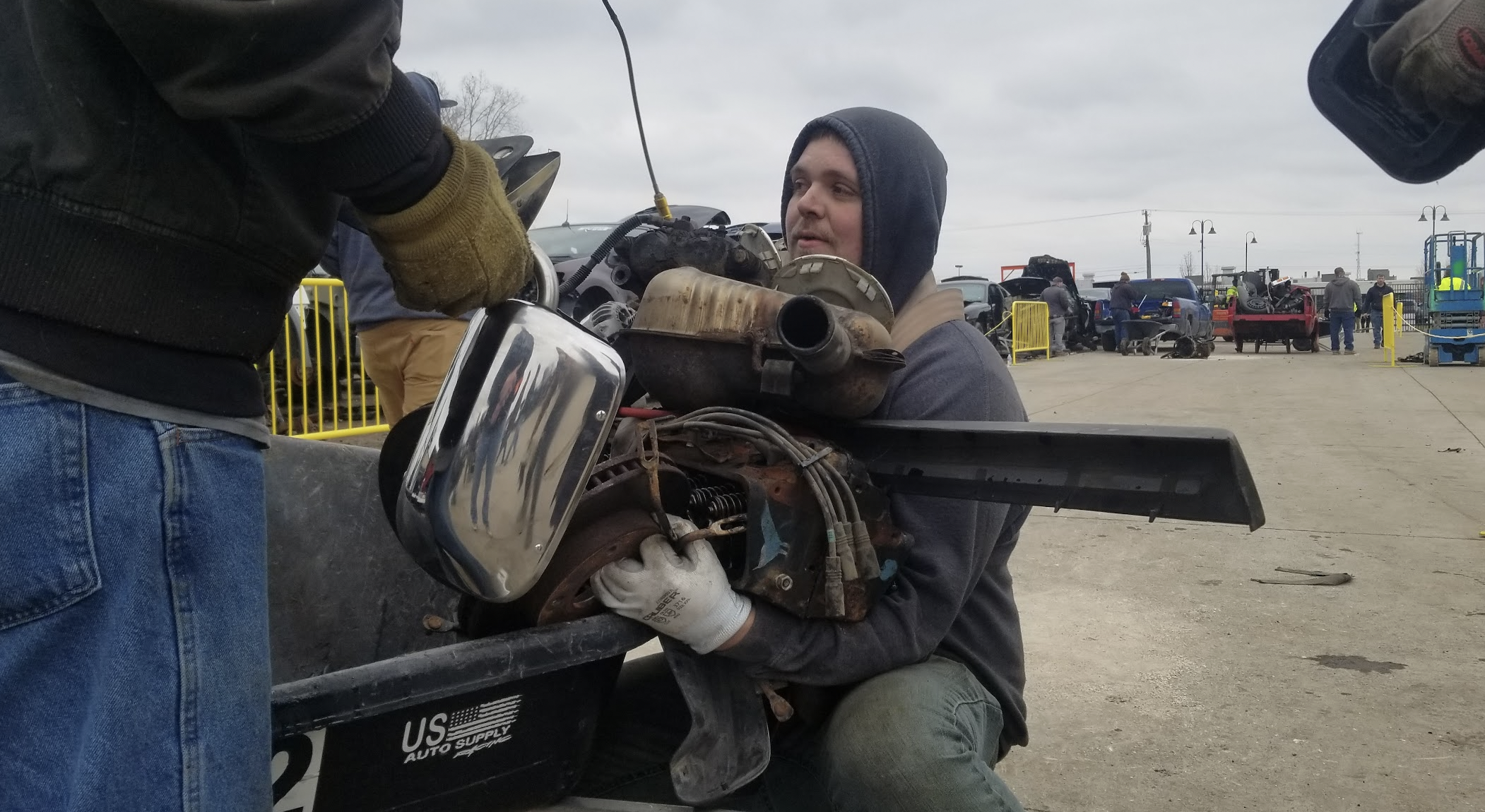 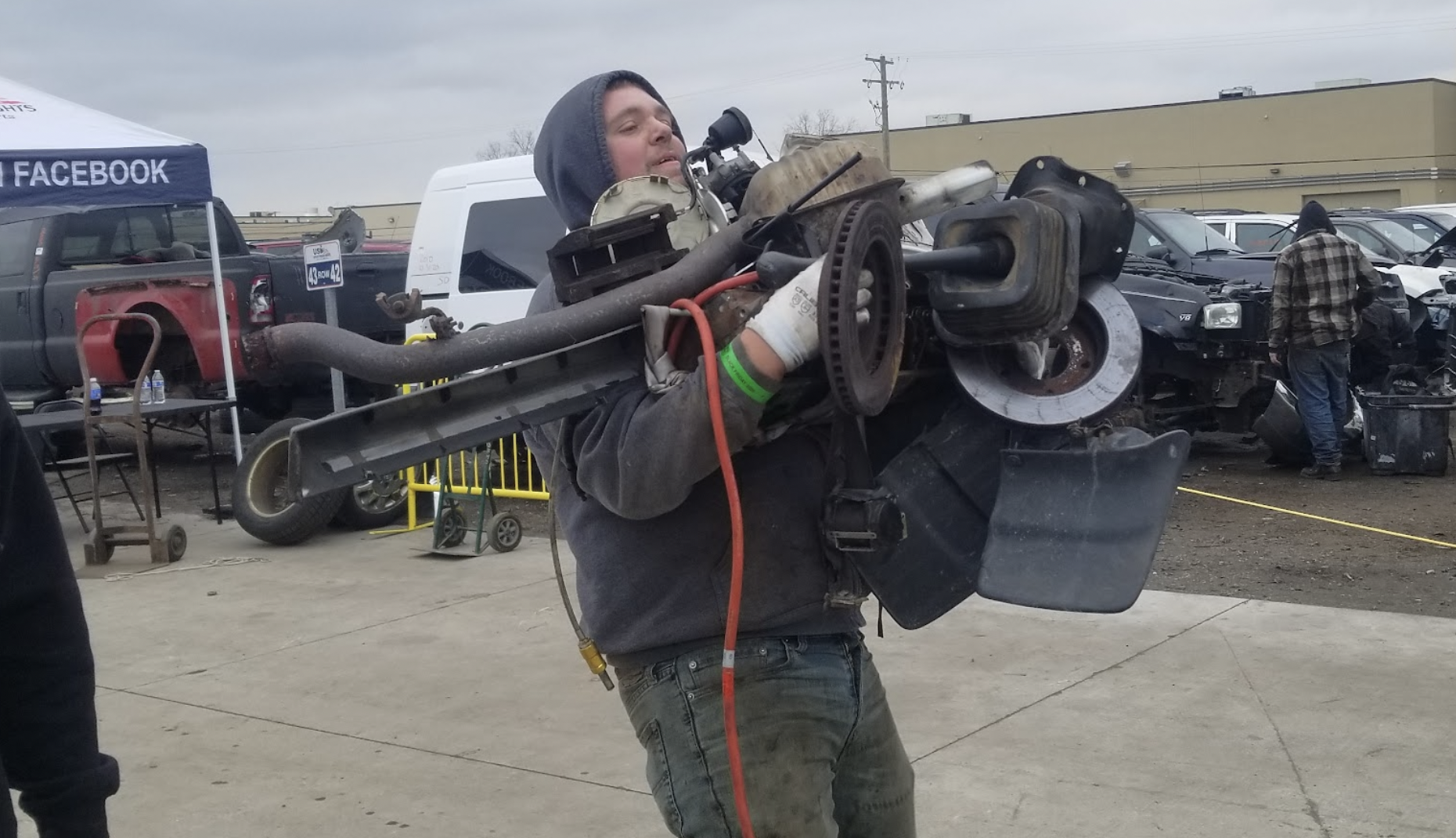 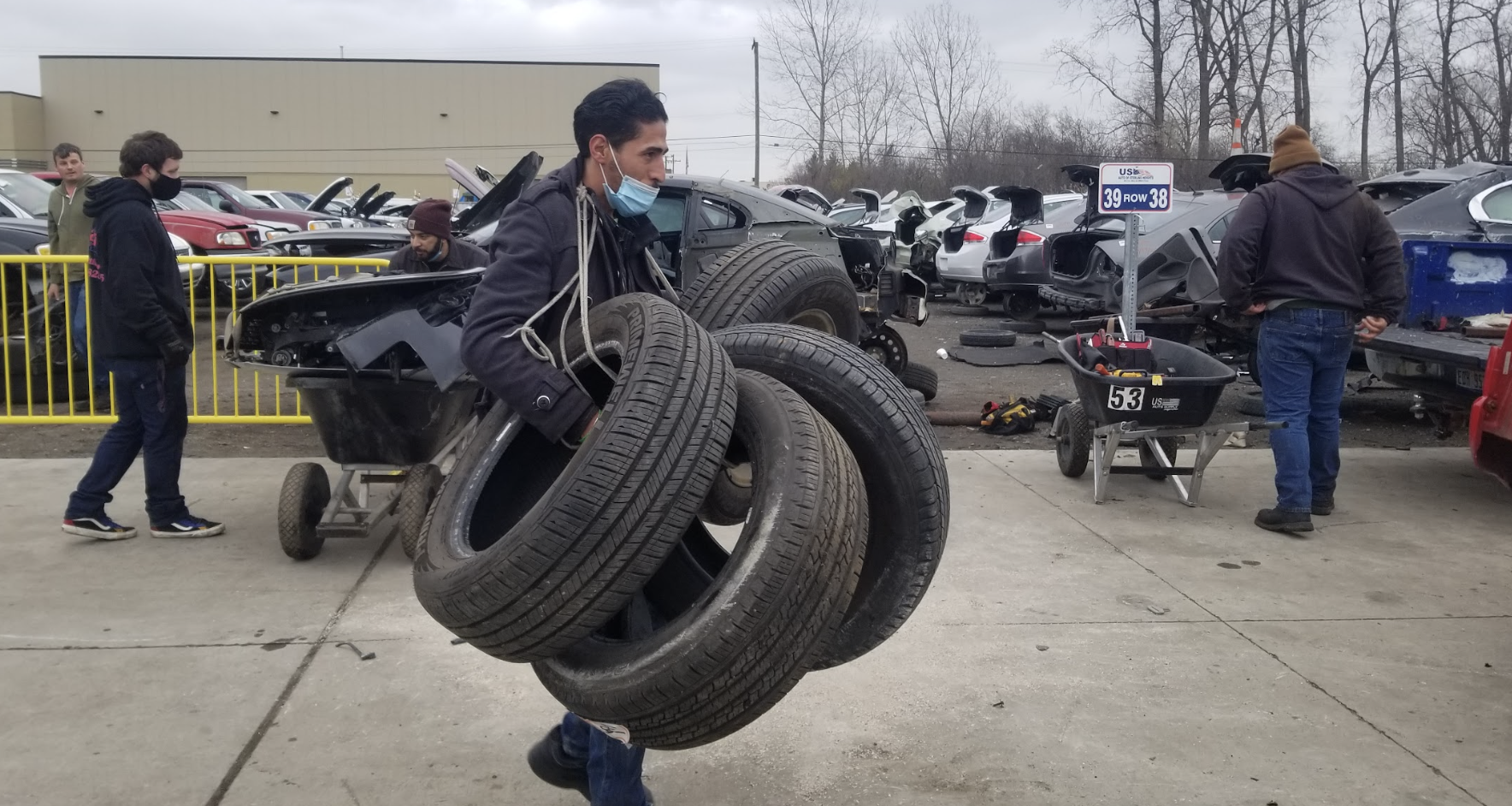 Here’s a guy carrying an automatic transmission on his back (again, using the seatbelt-as-strap trick): 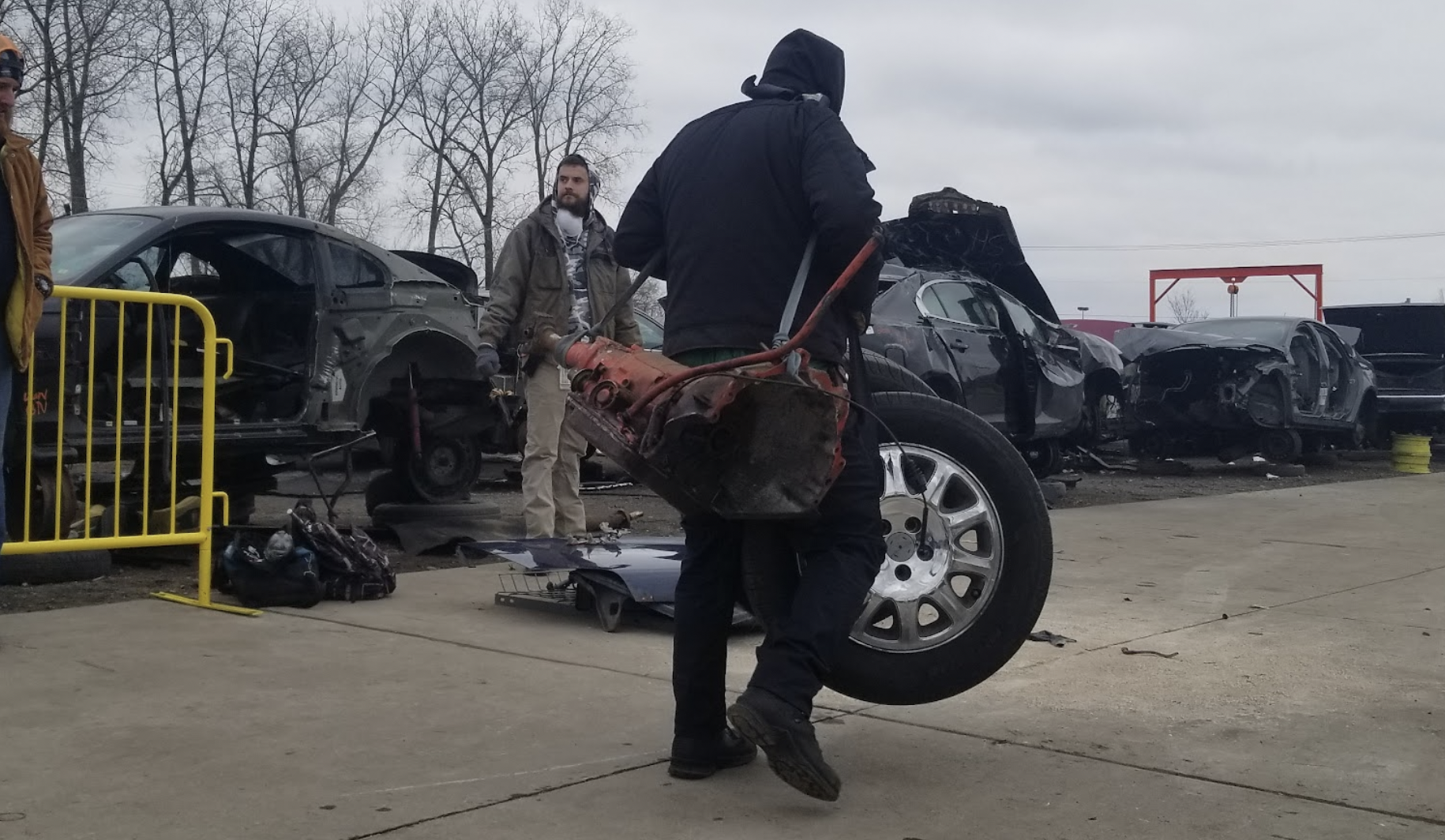 These guys tied seatbelts to a headliner, and used that as a tray to carry bumpers, doors, and lights — all of which are usually quite expensive. A single door is normally $60, a bumper cover is $35, a taillight is $20, and a headliner is $25. But these two guys paid just $120 total for their mountain of hardware: 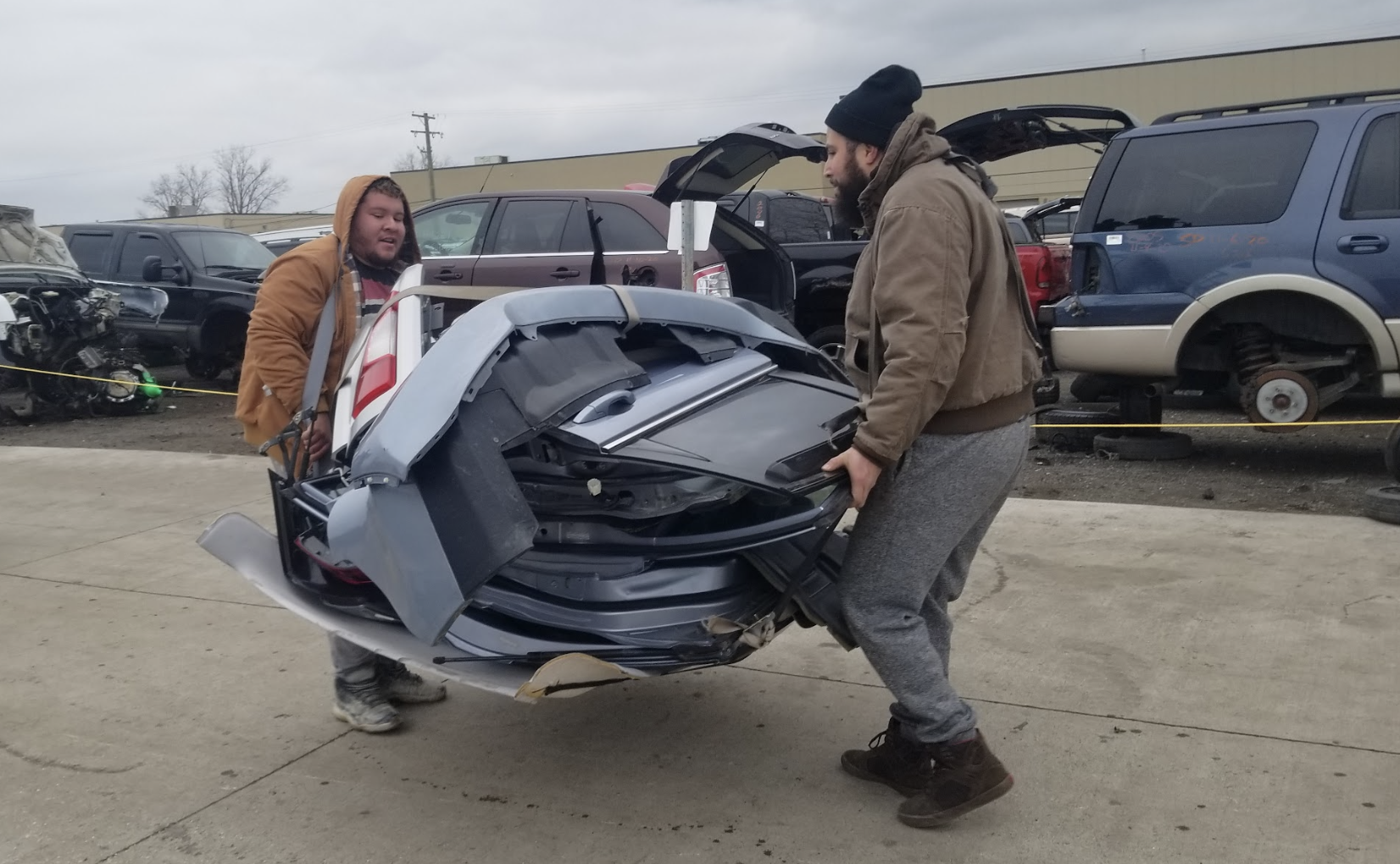 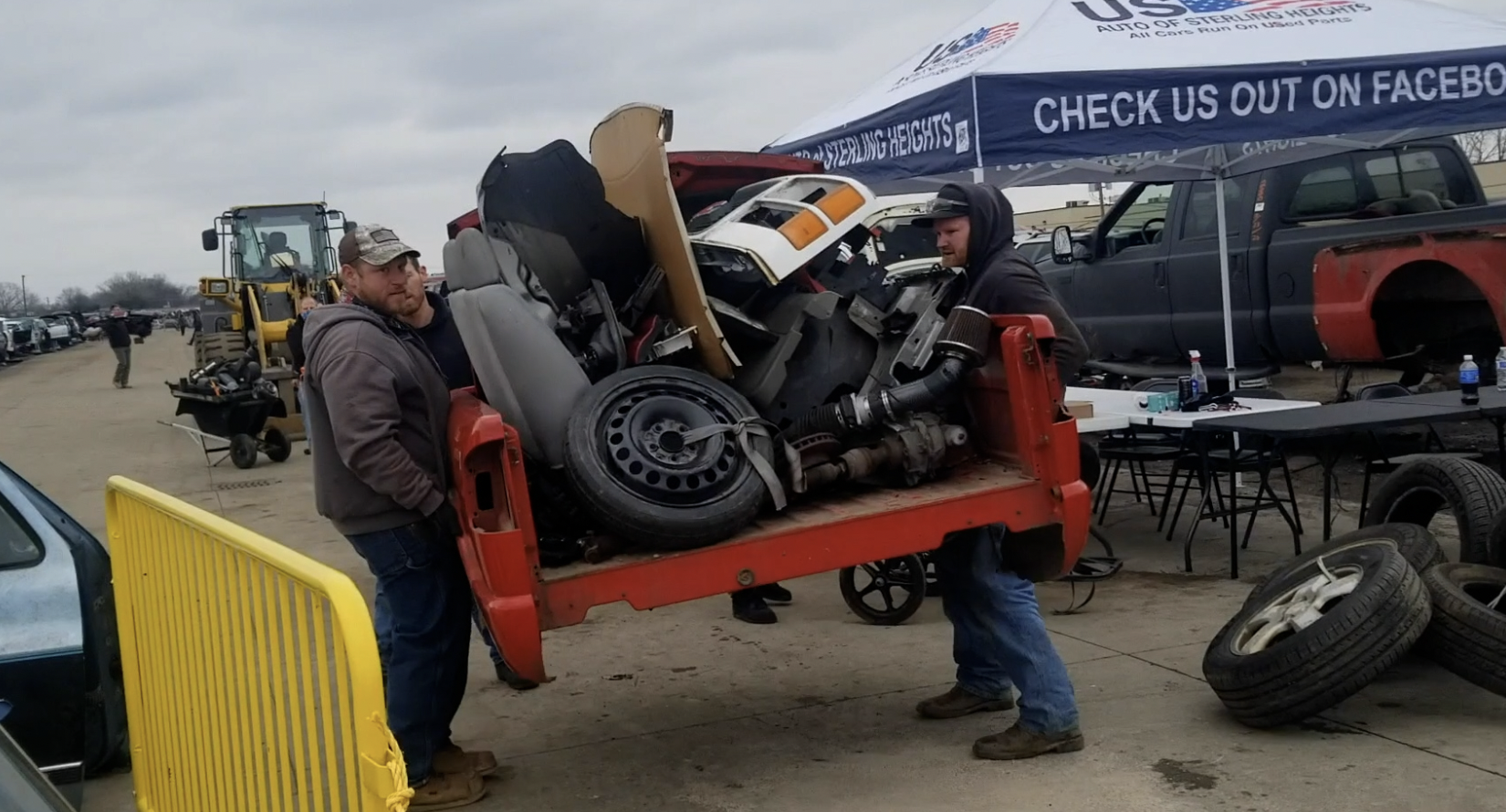 This dude below used a huge radiator as a tray to carry his parts. I see a headrest, a mirror, and some kind of air intake component. Plus, as you can see in the video above (but not the image below), there’s a big turbocharger tucked into his jacket. 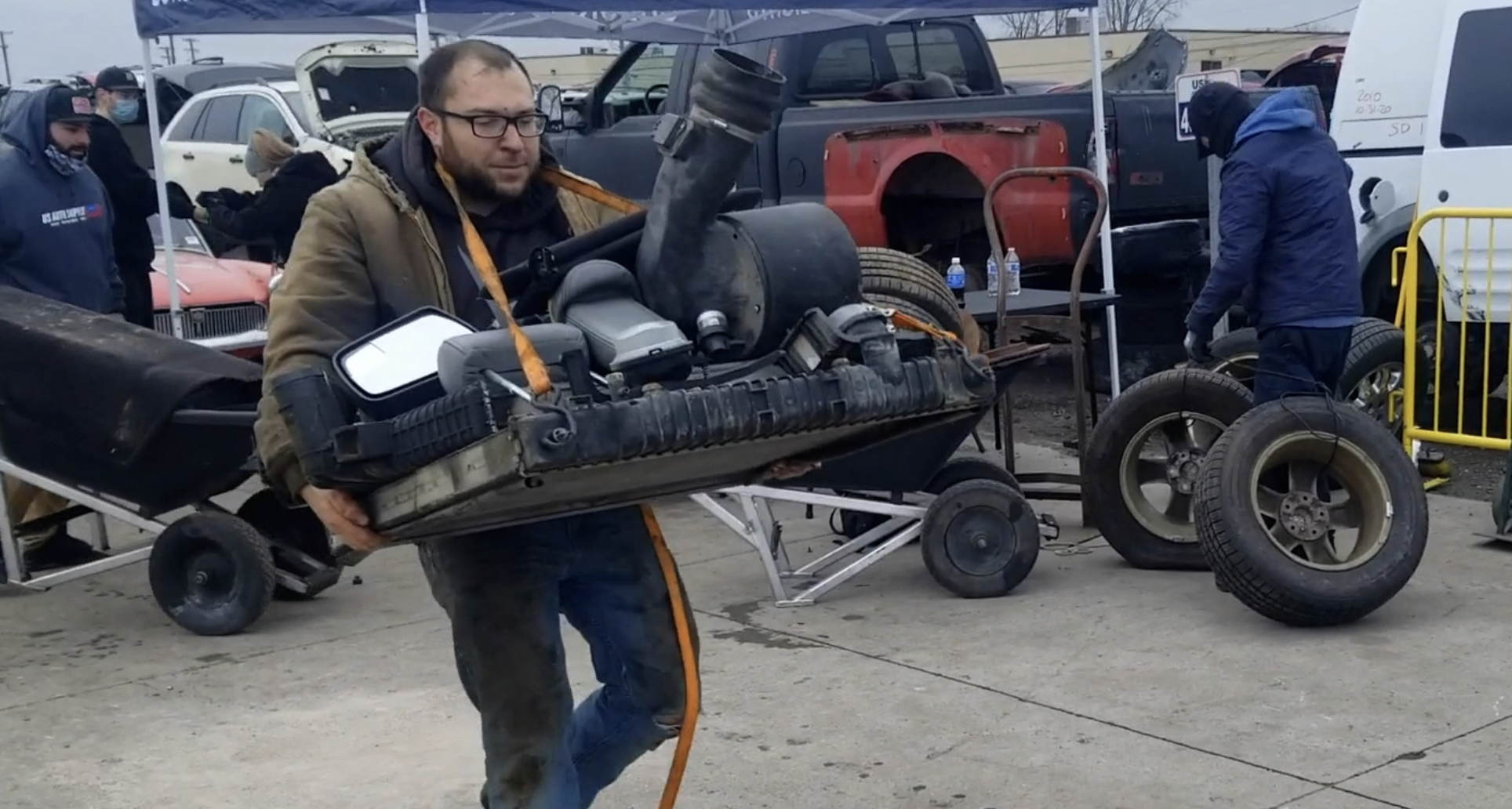 The group in the photos below threw a bunch of hoods, doors, and fenders onto what looks like a pickup truck cap. 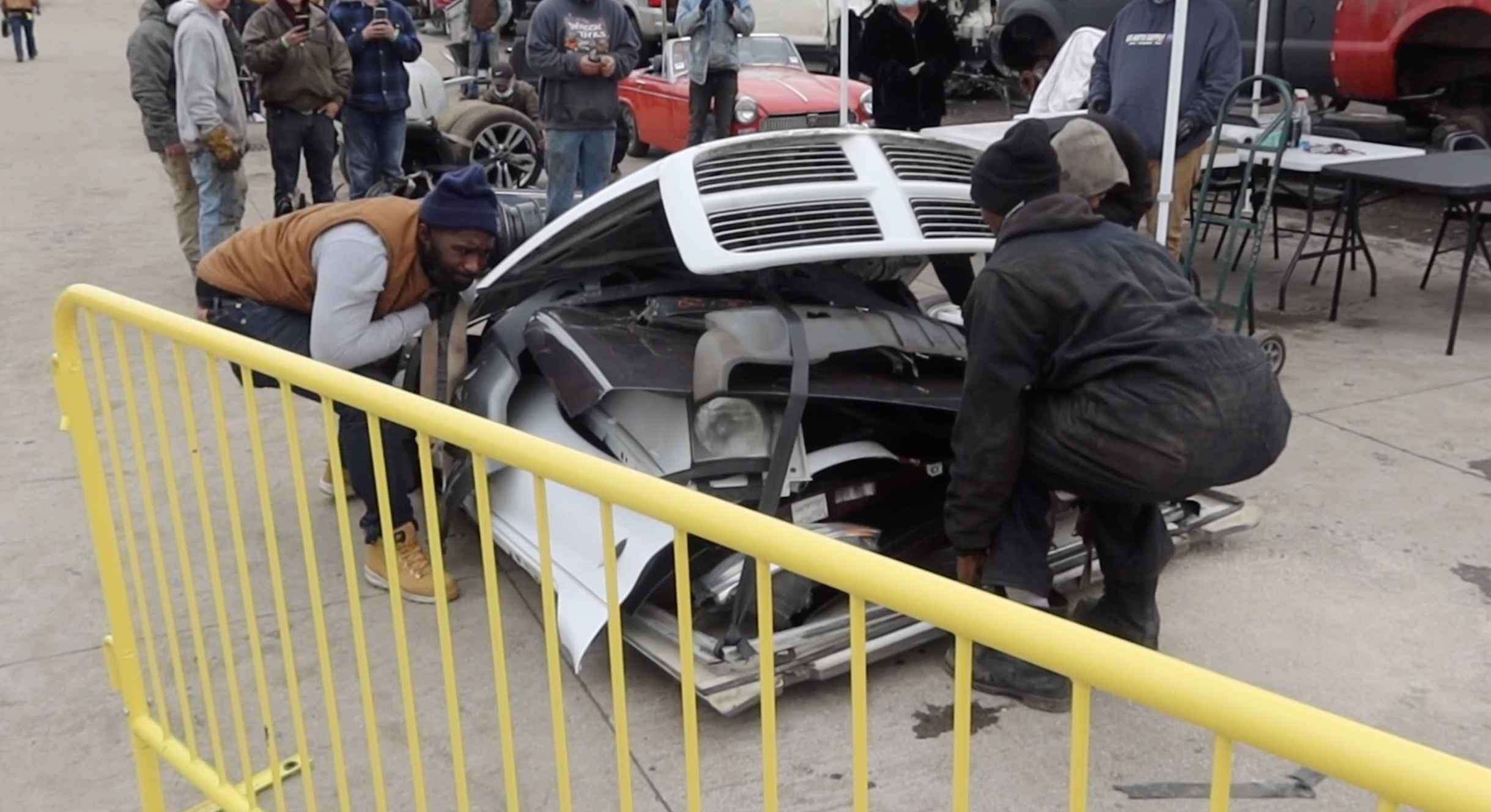 This team of three struggled at first, in part because their straps they were lifting from weren’t long enough, in part because the cap-frame to which they tied those straps was bending quite a bit, but mostly because the load was just so awkwardly large and heavy. They did eventually manage to get across the finish line, but it wasn’t pretty: 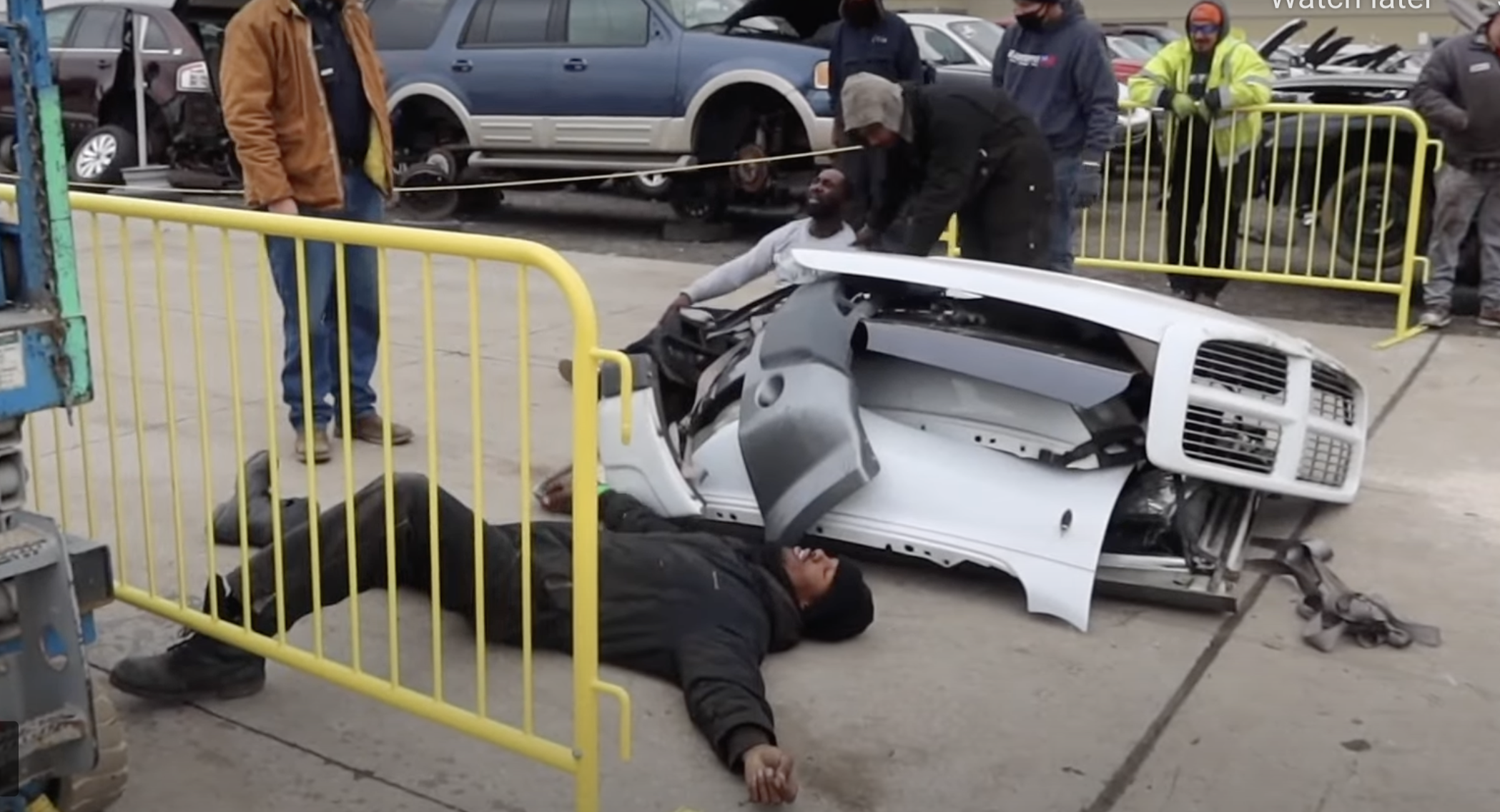 Anyway, watch that video above to see all of the madness of that glorious 60 for 60 day.

Rust-loving Jeep man, cofounder and EIC of The Autopian, Jason's friend. Email: david@autopian.com
Read All My Posts »
PrevPreviousTime To Play Parking Lot Challenge!: Choose One Car From These Parking Lots To Drive Forever
NextThe Autopian Has Reached 1 Million Pageviews In Its First Month. Thank You All So Much!Next