The world is divided between people who want to start shit and people who want to help. I think you could argue that the balance of the universe requires both groups to function, but what you absolutely cannot argue is that David Tracy is in the group that helps. That’s what David does. And if there’s a car involved, get out of his way. We saw this in action right as we pulled into Pebble Beach, where David helped out a motorist in need. What makes this especially great, though, is that the car that motorist was motorizing was something wildly, incredibly special, and David had no idea.

I mean, sure, David could tell it was a lovely old Fiat, and an unusual one at that – he noted the tiny but impressive V8 engine under the hood and the elegance and drama of the design.  He’s not made of drywall, after all, but I don’t think he realized he was poking at one of the fifteen 1953 Fiat 8V Supersonics ever built.

This is a $2 million car, friends. People dream of just standing next to these. And the man who eats groceries out of the bed of a pickup truck was gently caressing its carburetors, feeling for moisture.

Let’s talk about this car a bit: in 1952, seemingly out of nowhere, Fiat shocked the automotive world by building the Otto Vu, or 8V, which featured Fiat’s first V8 engine. They didn’t call it a V8 because Fiat mistakenly thought Ford had a trademark on the name “V8” so they flipped the characters to get around the problem that didn’t actually exist.

Everyone was surprised by the 8V because it was so unlike the sorts of inexpensive workhorse cars that Fiat was known for – this was an all-out sports car with a tiny (for a V8) 2-liter displacement and advanced independent suspension and overhead valves and a finned oil pan and all sorts of refinements and innovations that added up to a real, no-joke race-ready car. The body design was dramatic as well, but Fiat was very open to custom bodies from coachbuilders, so of the 114 8Vs built, there’s a surprising number of bodies, with big names like Zagato and Vignale and Ghia all making their own versions. 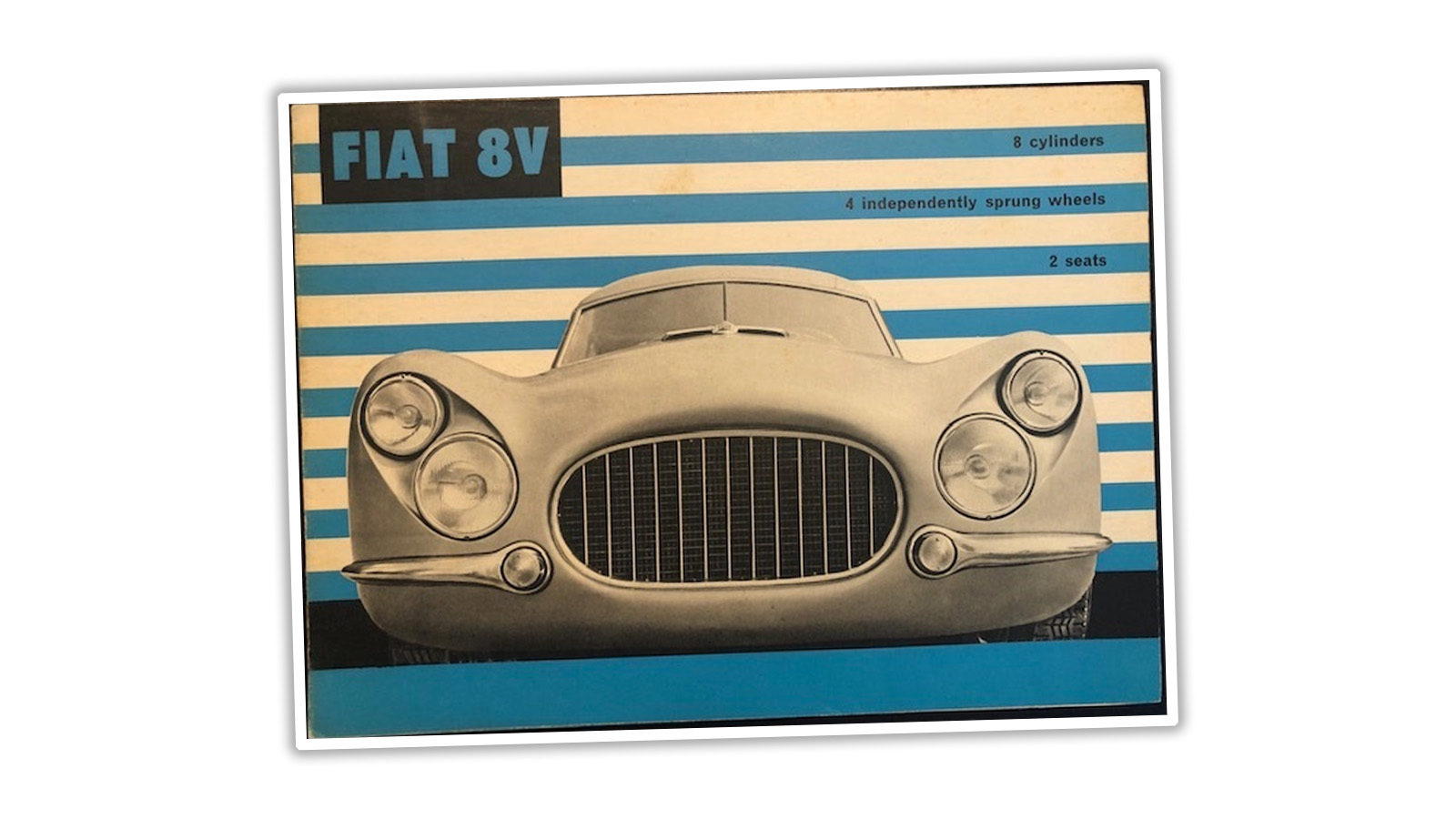 The most beautiful version, if you ask me (and, unusually, many people with good taste as well), is a run of 15 built by Ghia to the design of Giovanni Savonuzzi. These were called the Supersonic because the design was inspired by the burgeoning jet age, with all of its wonderful visual vocabulary of aerodynamics and fins and intake and jet exhausts and an overall sense of exuberance and love of speed, in its pure, undistilled form. 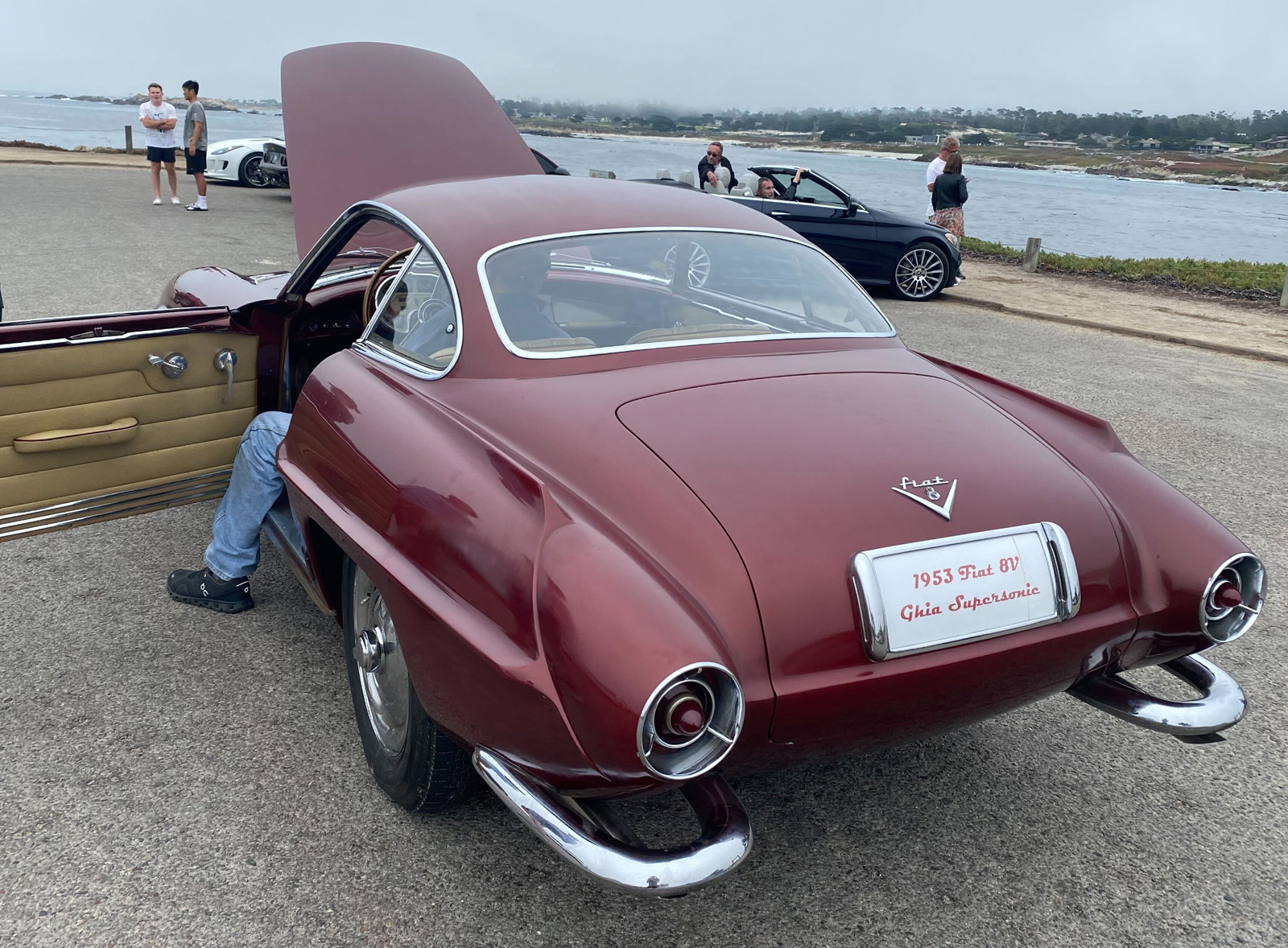 Look at that roofline and you can see the Ghia signature 1950s look as clear as fresh gasoline. Its the same roofline and window design as, most familiarly, a Volkswagen Karmann-Ghia. Those Ford-like taillights are prime jet age exhaust designs, and holy crap, look at those incredible bent-tube bumpers. 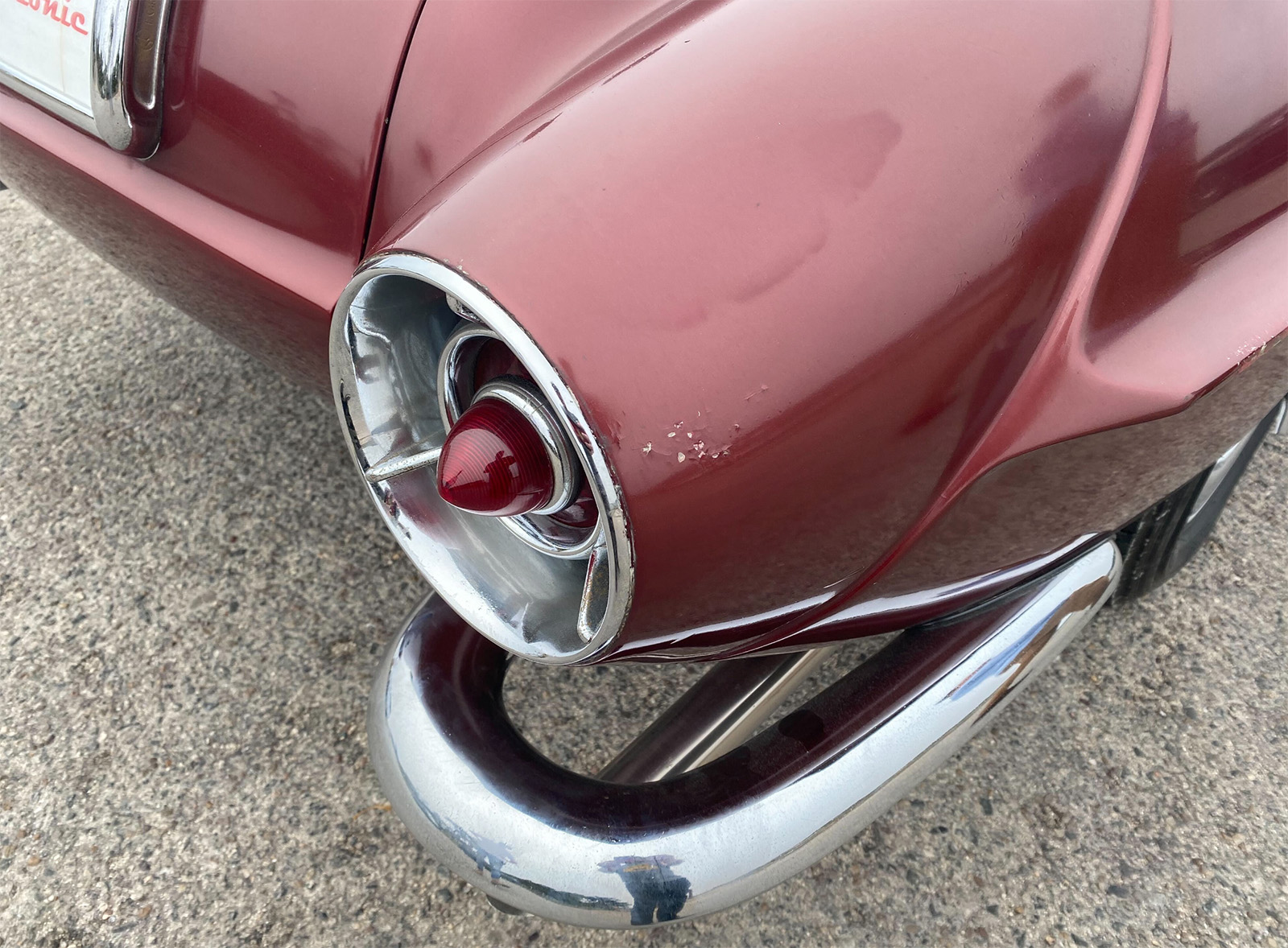 Looking close, you can see a bit of patina on this one, because it’s essentially unrestored, which makes this example even more incredible. The car is absolutely stunning, perhaps the best-realized example of mid-century, jet age-inspired car design, perfect in proportion and line and character, but it was not in the mood to run well. 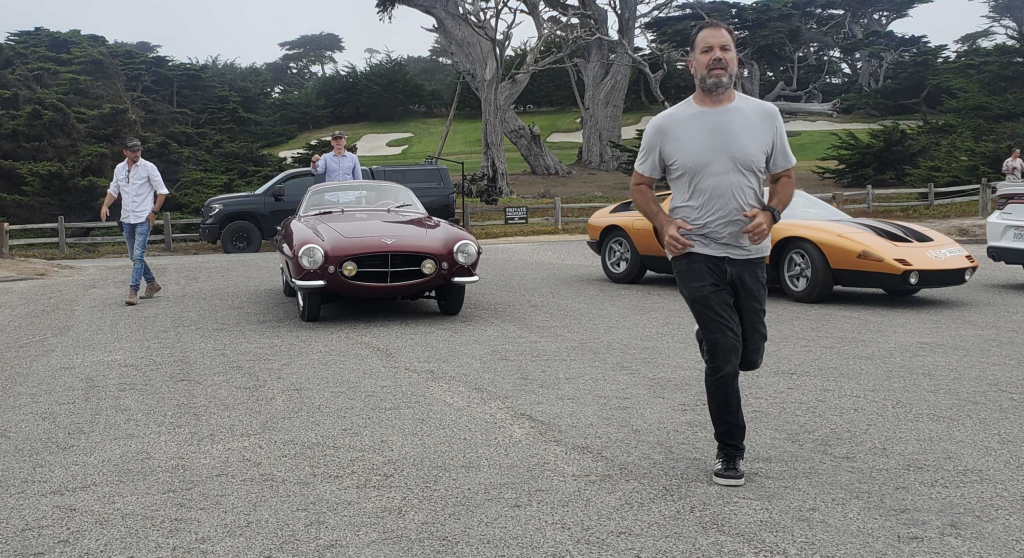 The owner had to have his car pushed into the parking lot where we had parked our cars after shooting some Pebble beach intro videos you’ll see soon, and that’s when David sprung into action. 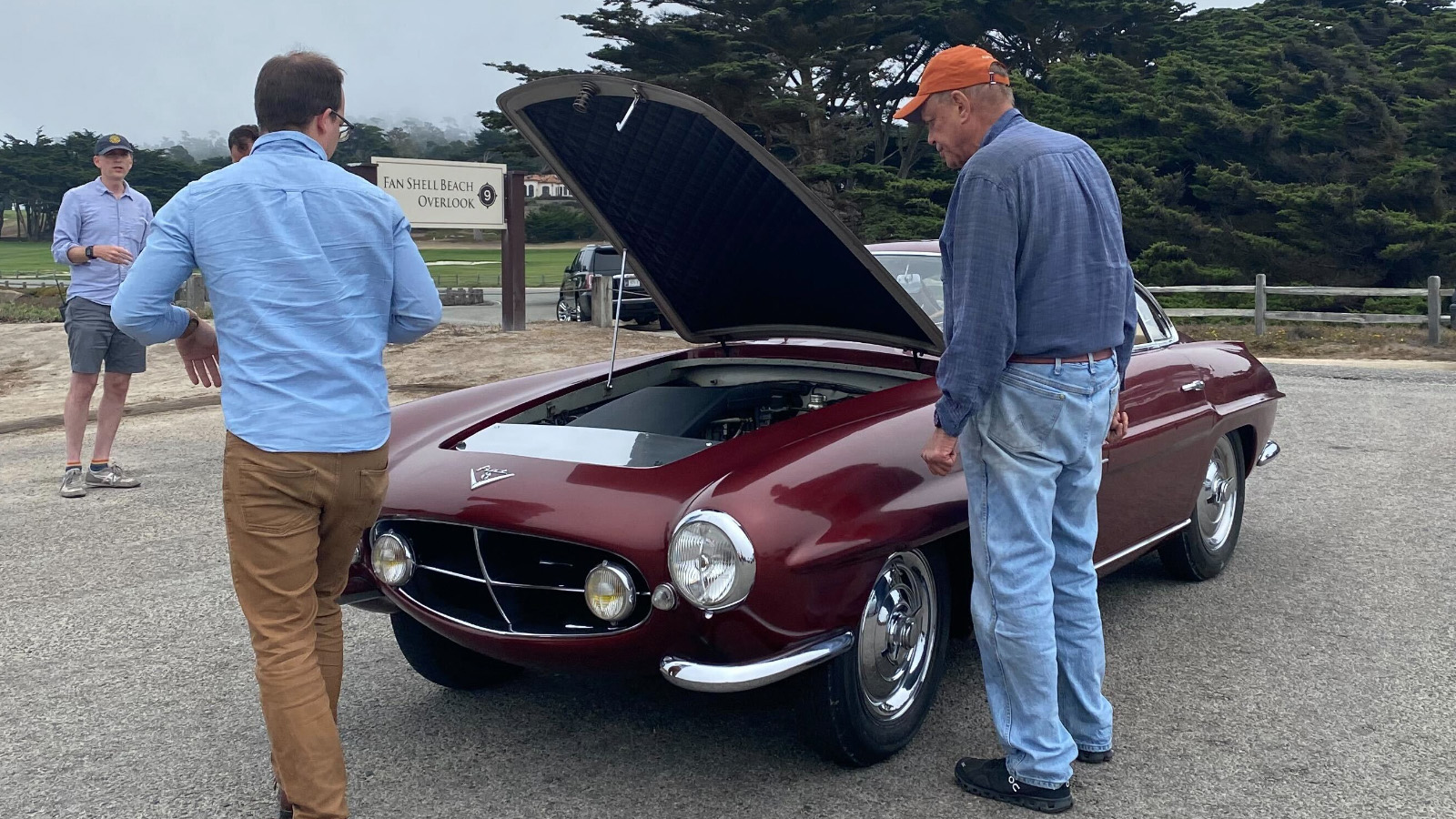 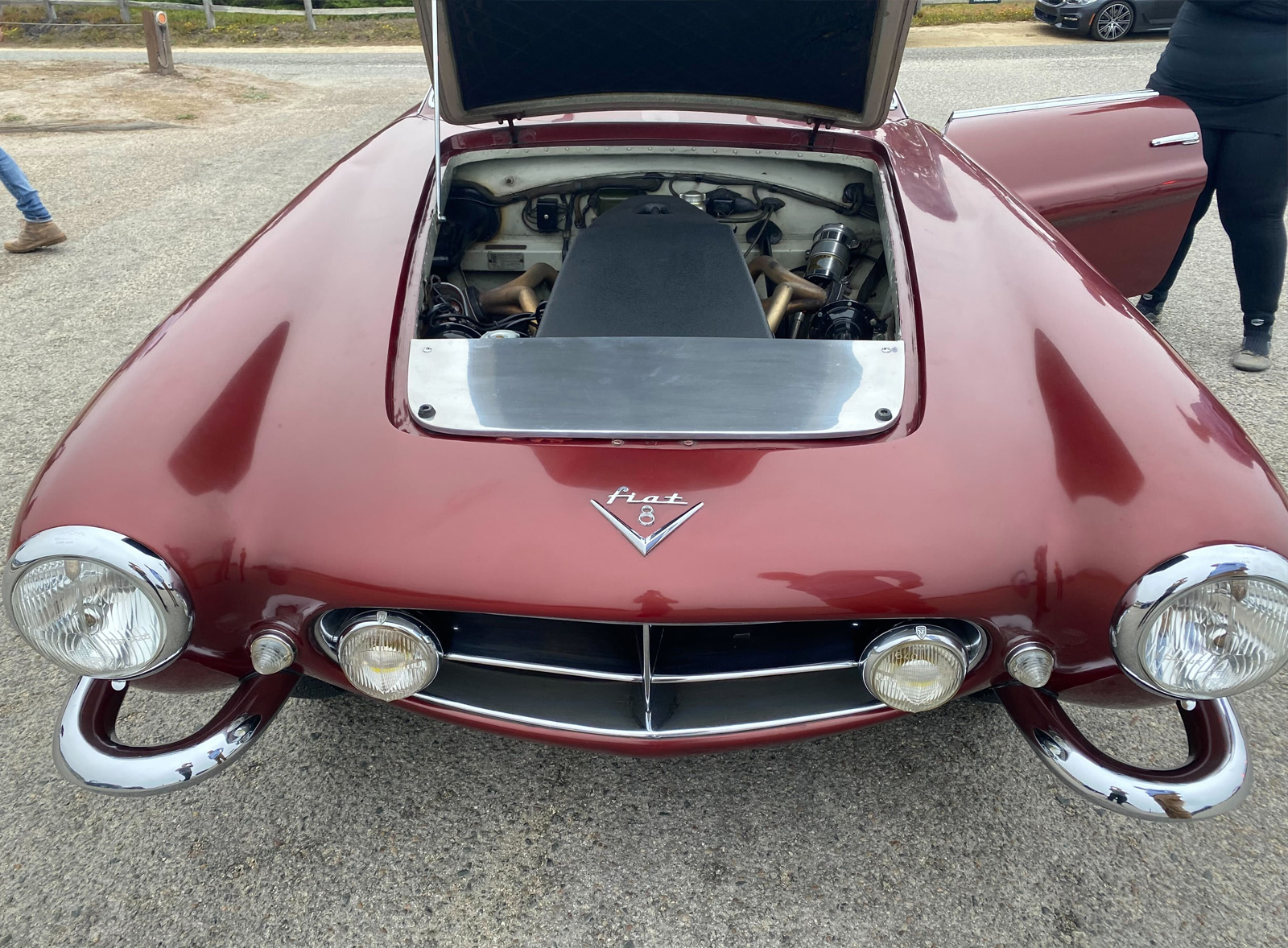 David’s assessment of the issue, after rolling under it to check an auxiliary fuel pump (a popular item to fit for owners of 8Vs) was that the problem was much simpler: it was flooded (as you can see in the embedded Instagram video above).

Yes, those twin Weber carbs had delivered too much fuel, so the mixture in the cylinders couldn’t be ignited by the plugs, and, really, the only thing to do was wait it out. I’ve had to do this in my Beetle plenty of times, and I think all of the old carbureted shitboxes I drive.

Shitbox or icon of automotive art, the solution is the same: time. And then starting with the gas pedal held all the way down, no pumping. David checked everything out, waited, coached the owner on how to start it, and then that incredible little V8 roared back to life, making this likely the most valuable car David has ever had a hand in getting back on the road.

Good work, David. Now they definitely can’t kick you out of here.

[Editor’s Note: I’m not sure I’d quite call this a “fix,” but it did get the gentleman back on the road. His initial inkling was that the auxiliary fuel pump he’d had installed was having some wiring issues, but I reached down under the car and squeezed the outlet line: I could feel the pulses; the line was clearly being pressurized. Looking under the hood, not only did I smell gas, but evaporated fuel vapors were pouring out of the intake. It looked like dry ice in a haunted house, spookily creeping out. A closer look revealed some gas-soaked gaskets on the carb, so it was clear to me this sucker was flooded. I’ve flooded my 1966 Mustang, 1965 Valiant, 1958 Willys FC-170, 1948 Willys CJ-2A, 1985 Jeep J10, 1976 Postal Jeep and I could go on and on — flooding carbs is just part of the game when you own old cars. And in this case, the common malady found in my junkers and in this $2 million masterpiece brought us together. I suggested that the gentleman keep his throttle open for a few minutes, let the fuel vapors evaporate, and then crank the motor. That little V8 purred to life; it was glorious. And it was a reminder that, though on the outsides these machines are totally different than cars perhaps you or I own, underneath they share a lot of traits. And these traits connect us as car enthusiasts. This guy seemed like a nice fellow, and I look forward to seeing him at the show, proudly displaying his beautiful Italian sports car. -DT].

I'm a co-founder of the Autopian, the site you're on RIGHT NOW! I'm here to talk to you about taillights until you cry and beg me to stop, which I absolutely will not. Sorry. Hug? Also, David's friend.
Read All My Posts »
PrevPreviousWatch Matt Farah Sit In The Peel P50, The Smallest Production Car Ever
NextSwedish Test Offers Compelling Evidence That Buttons Are Less Distracting Than Touchscreen InfotainmentNext