What Do You Think About The Upcoming All-Electric Jeep Wagoneer S? 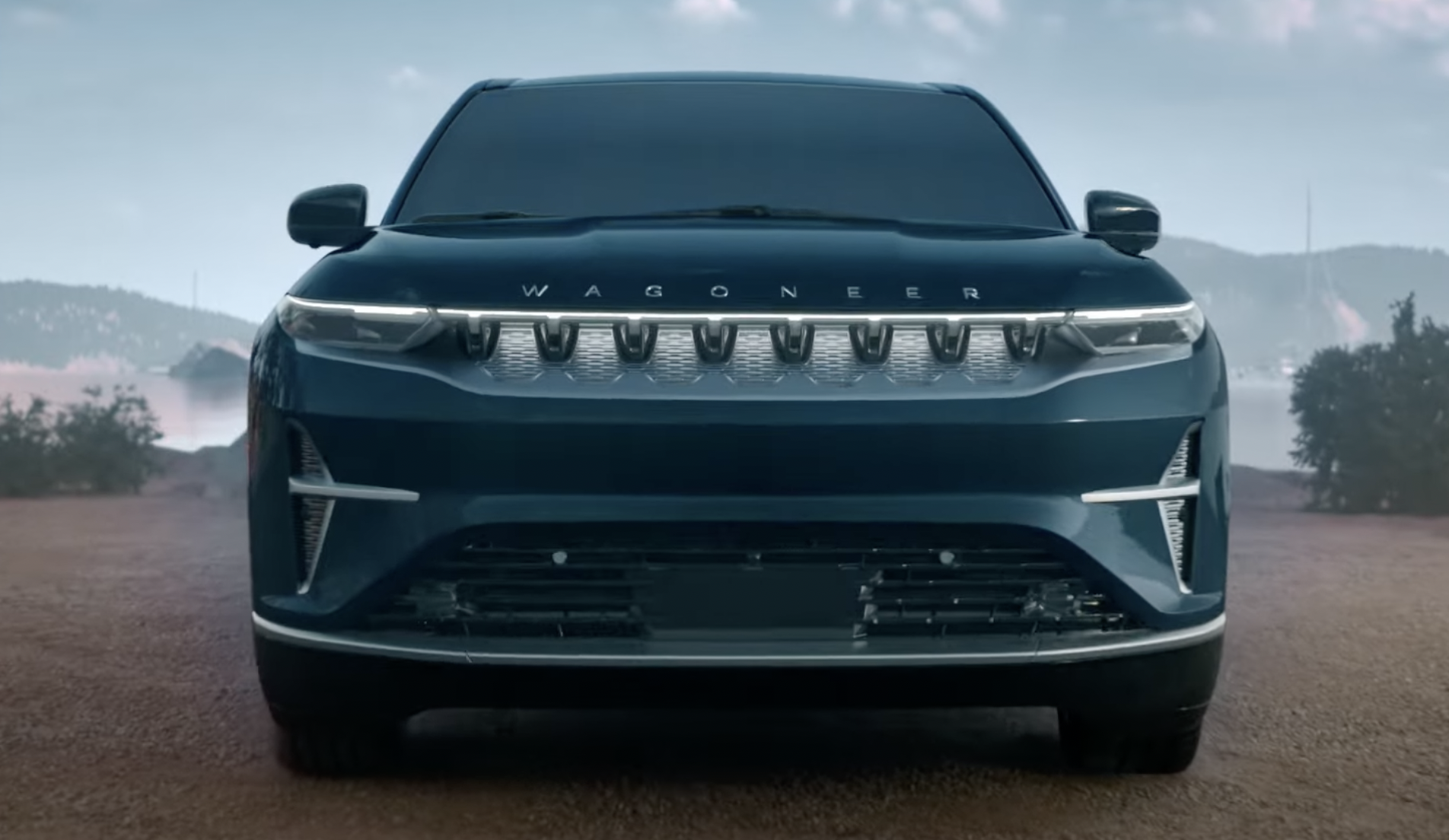 Jeep had a big press conference yesterday, which I attended virtually from Australia because I’m Jeep-obsessed. During the briefing, Jeep Brand’s CEO Christian Meunier announced that “By the end of 2025, [Jeep’s] full lineup will be electrified, including four all-electric vehicles competing in the heart of the marketplace.” Stellantis also said that by 2030, half of all Jeep sales in the U.S. are expected to be electric. More importantly, the press conference came with three major EV debuts: the Jeep Recon, the Jeep Avenger, and the Jeep Wagoneer S. Let’s look at the last one.

Sharing the same “STLA Large” platform as the Recon, the Wagoneer S will be built on a unibody platform with a big battery pack under the belly, a frunk up front, and a motor driving each axle — a fairly standard setup to find in a modern EV. Jeep says it’s aiming for a range of 400 miles and an output of 600 horsepower, which should get the machine to 60 mph in 3.5 seconds. The car will make a public debut in 2023, with production starting the following year. Apparently Jeep is taking reservations as early as early 2023. 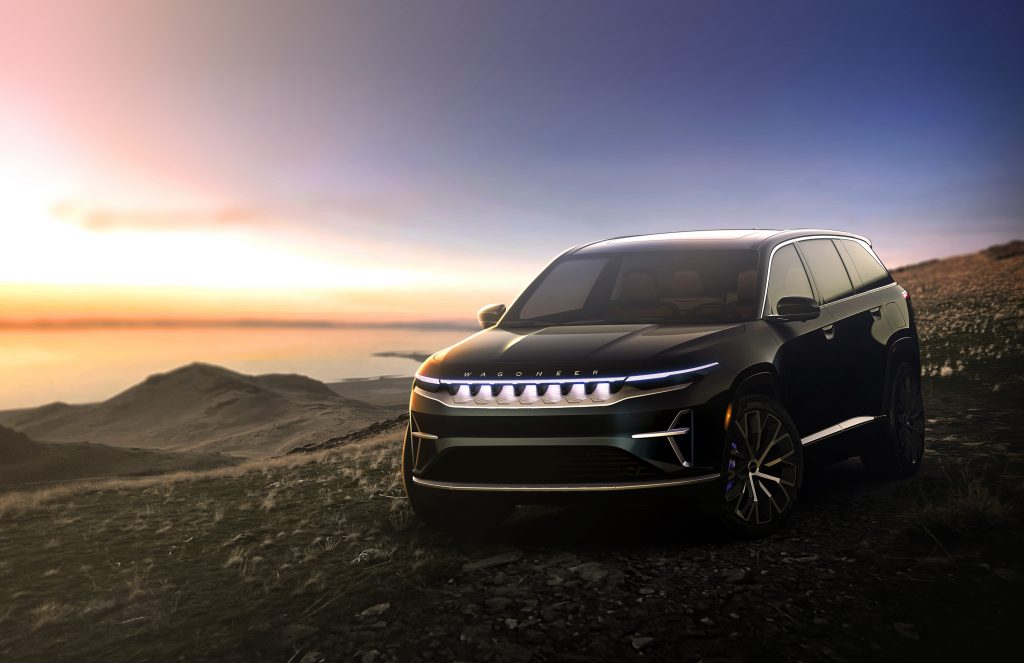 I don’t have a ton of commentary to add to these photos other than that Jeep’s decision to start its fully electric lineup with the Wagoneer S and the Recon makes a lot of sense. The latter is billed as a family-sized off-roader, and the Wagoneer as a premium SUV. These are two segments that tend to command high price tags, and right now electric cars are just expensive. So if you’d like some profit margin, you may as well wrap those pricey batteries in luxury, because people will willingly drop heavy coin for it. A pricey mid-size or small SUV may not have worked in the U.S. right now.

I’ll note that I find the rear wing fun and different, and the wide rear horizontal light bar looks nice, too. Plus, in the dark photo above, the grille slots look like snow buildup: 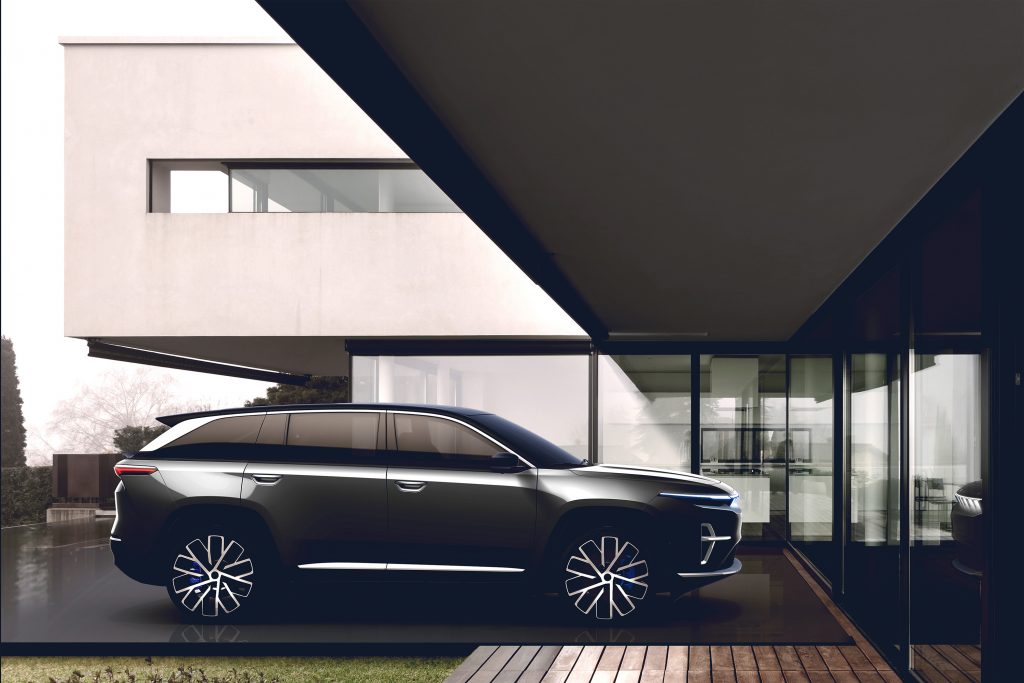 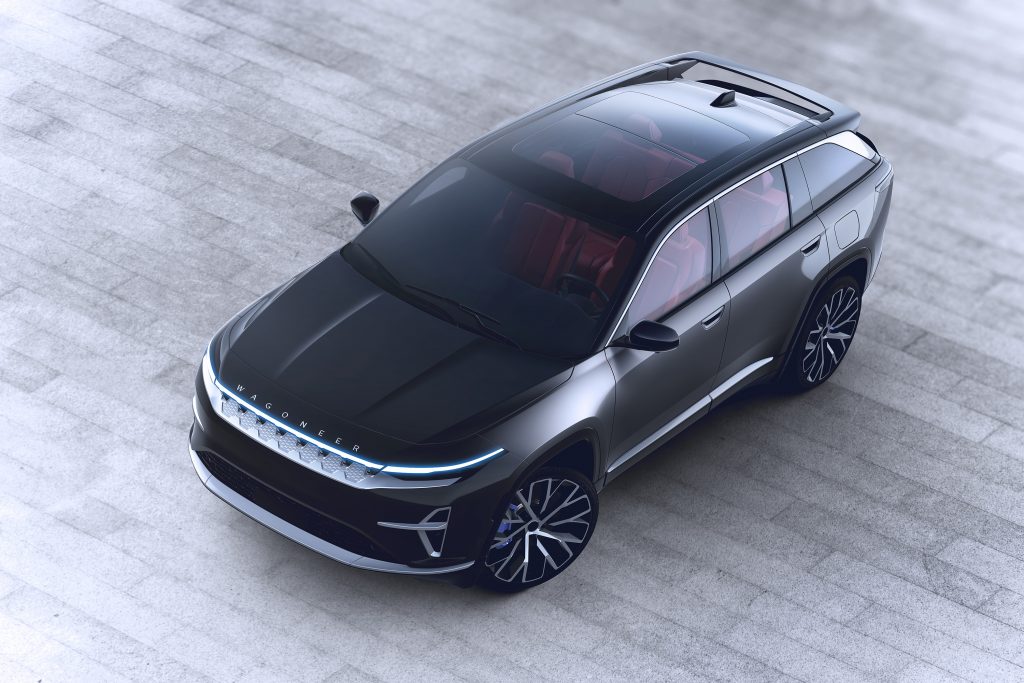 Of today’s three all-electric Jeep debuts, this one has me least interested. The Avenger is a small EV that should appeal to the masses in Europe if it’s priced right, and the Recon is Jeep’s first truly off-road capable EV. This Wagoneer S, though, looks a lot like other EV crossovers on the market. It looks nice! But, compared to the other two Jeep EVs that showed their faces today, this one feels less interesting, but maybe my colleague Jason can find some excitement in the Wagoneer S.

[Editor’s Note: I’m not sure I can actually find some excitement in this, because I’m not sure I’d even be able to sit in something so sleek and modern without combusting, but I do think what they’re showing here – even if they’re just renders – is a handsome and clean design.

I think even David’s cloudy engineer eyes honed in on the two key details of this design: that interesting roof-mounted wing and the novel treatment of the traditional Jeep seven-slot grille.

The rest of the design is impressively minimal, with the only real bit of jewelry being that polished steel arch that runs up the A-pillar, across the roofline, and then fills and defines the D-pillar. It’s clean and precise-looking, which seems to be the defining design language here, and that roof wing follows suit as well, extending back from that roofline cleanly, not so much rising as much as allowing the center part of the roof to dip down, leaving the wing to carry the roofline on its own. It’s a nice touch, though I think the vantage point to really appreciate it is from above, where it won’t be seen as often for us non-avians.

The treatment of the fiercely-defended Jeep seven-slot grille is interesting, because, as we’ve seen on a few other recent Jeeps, it’s not actually a grille, because those aren’t open air intake slots. In many ways, this is the most radical departure, because they’re not really slots at all, instead are seven gaps between eight teeth-like dividers there, over a sloping, textured, and it appears illuminated surface.

On this EV, there’s no need for cooling air in that area (it all seems to come in below the bumper line) so what’s left is purely for identity purposes. 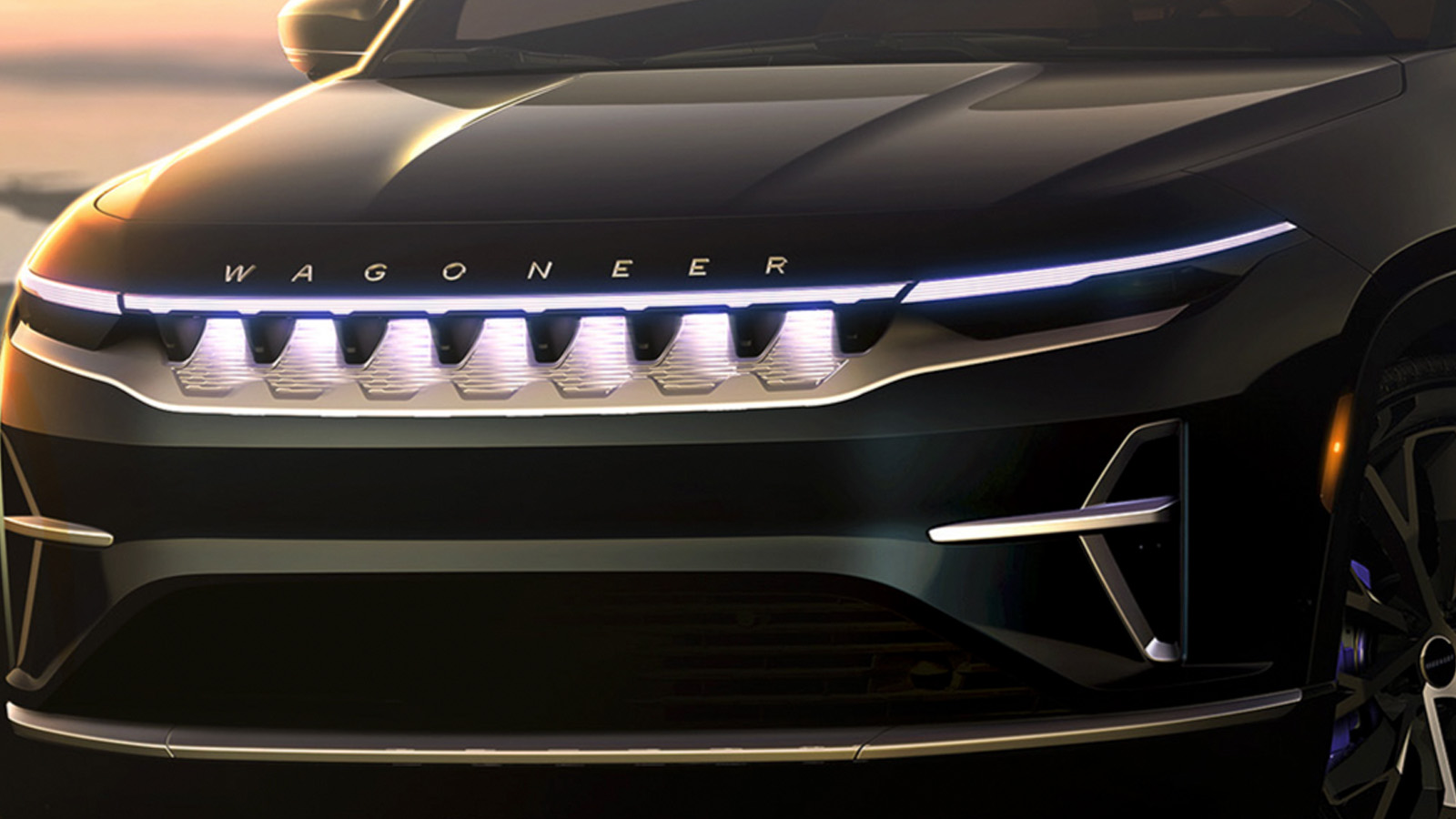 In this illumination, the negative space shapes do suggest piles of snow, as David noted, though I wonder if that’s partially an effect of the photograph, since in person the concavity of the the silver textured area may be more evident.

It’s interesting, though I’m not so sure how strong its connection to the traditional Jeep slots are, if that even matters at this point?

Rust-loving Jeep man, cofounder and EIC of The Autopian, Jason's friend. Email: david@autopian.com
Read All My Posts »
PrevPreviousGM Wants China’s Super Rich Buyers So Badly It Resurrected Its Co-Founder
NextSomeone Went Through The Work To Import A Chevy Orlando Into The United StatesNext