What It Was Like Driving The Wildest New Car At Pebble Beach: The Hispano Suiza Carmen

Monterey Car Week is something truly special in the automotive world. No matter how much you know about cars, or think you know about cars, there is always something new to discover. There’s always some car you’ve never seen before or heard of, and there are even brands that have been extinct for many years that sometimes come back to life. This is the beauty of Car Week. 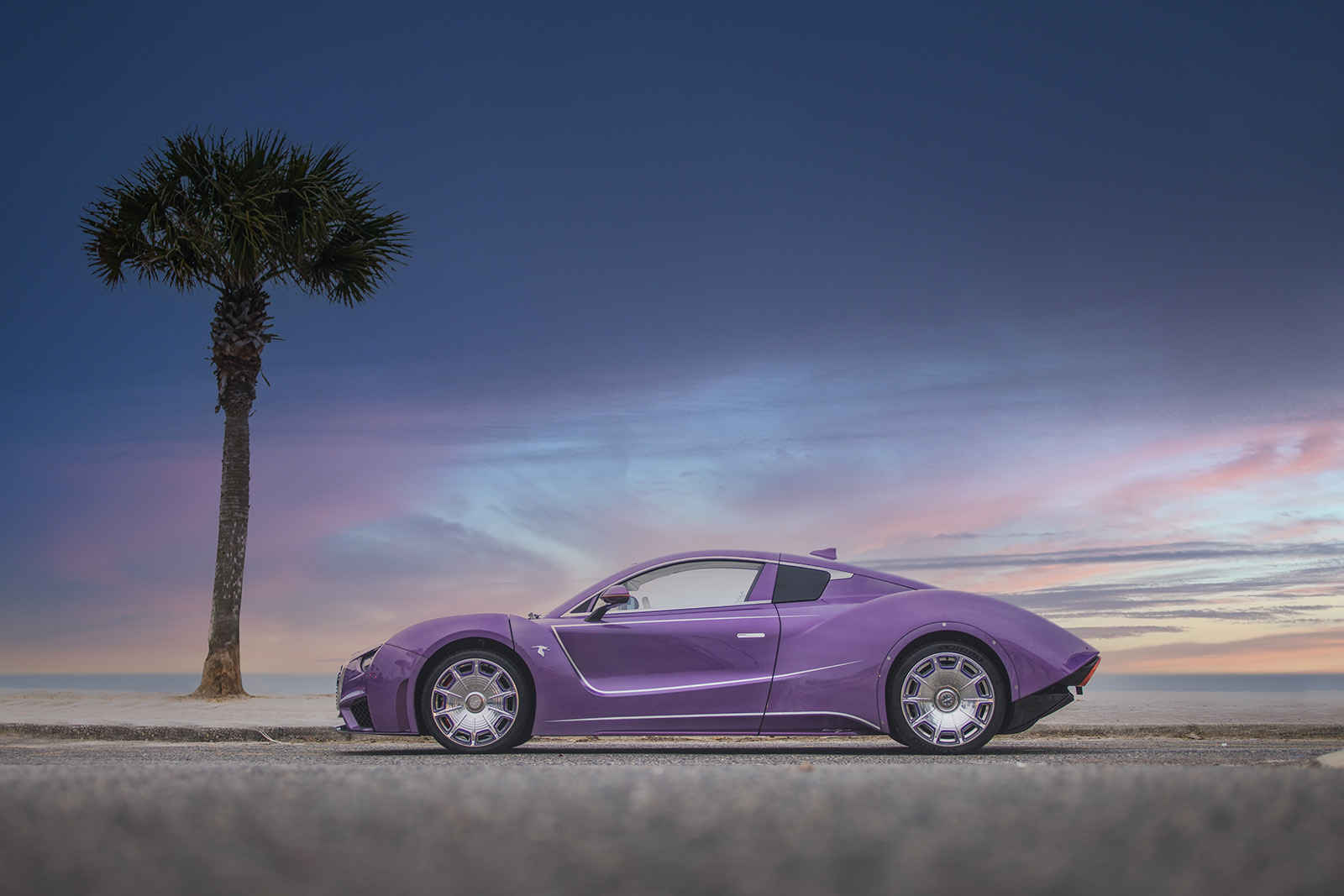 Although I’ve been going to Pebble Beach for 20-plus years now, driving up this time as an official Autopian with Torch and Tracy was something special. It is especially fun for me to not only experience the incredible car shows, auctions, driving events and more, but now to be able to share them with you all as well. Plus it was really fun to see how uncomfortable David was at first, but quickly found out he actually fit in perfectly. And it wasn’t just because he was eating caviar on the lawn with his pinky in the air [Editor’s Note: I can explain! -DT]; he found that, whether your car is worth $100 or a million, car people are car people and talk with the same down-to-earth enthusiasm.

While we were at the Quail on Friday, it was fun running around with Jason and David finding some of the most unusual, and quite frankly most Autopian, cars out on the field. For example, that new Meyers Manx was right up our alley!

But there was one car that stood out to me that I kept wanting to go back to, and I bugged the guys until we did. That car is the brand new Hispano Suiza Carmen.

The Hispano Suiza Carmen Stood Out At The Quail

The first thing that popped to me was the gorgeous lavender exposed carbon fiber bodywork. In person, it is simply stunning, and stood out from anything else out on the field. I didn’t put it together at the time, but after I discovered that the car was inspired by the Dubonnet Xenia, the design really makes perfect sense for a car set to re-launch the brand. The Dubonnet Xenia, shown below, was a coachbuilt work of art that was built in 1938 for a customer’s (André Dubonnet, of the famous booze, and a racing driver) unfortunately soon-to-be deceased wife. 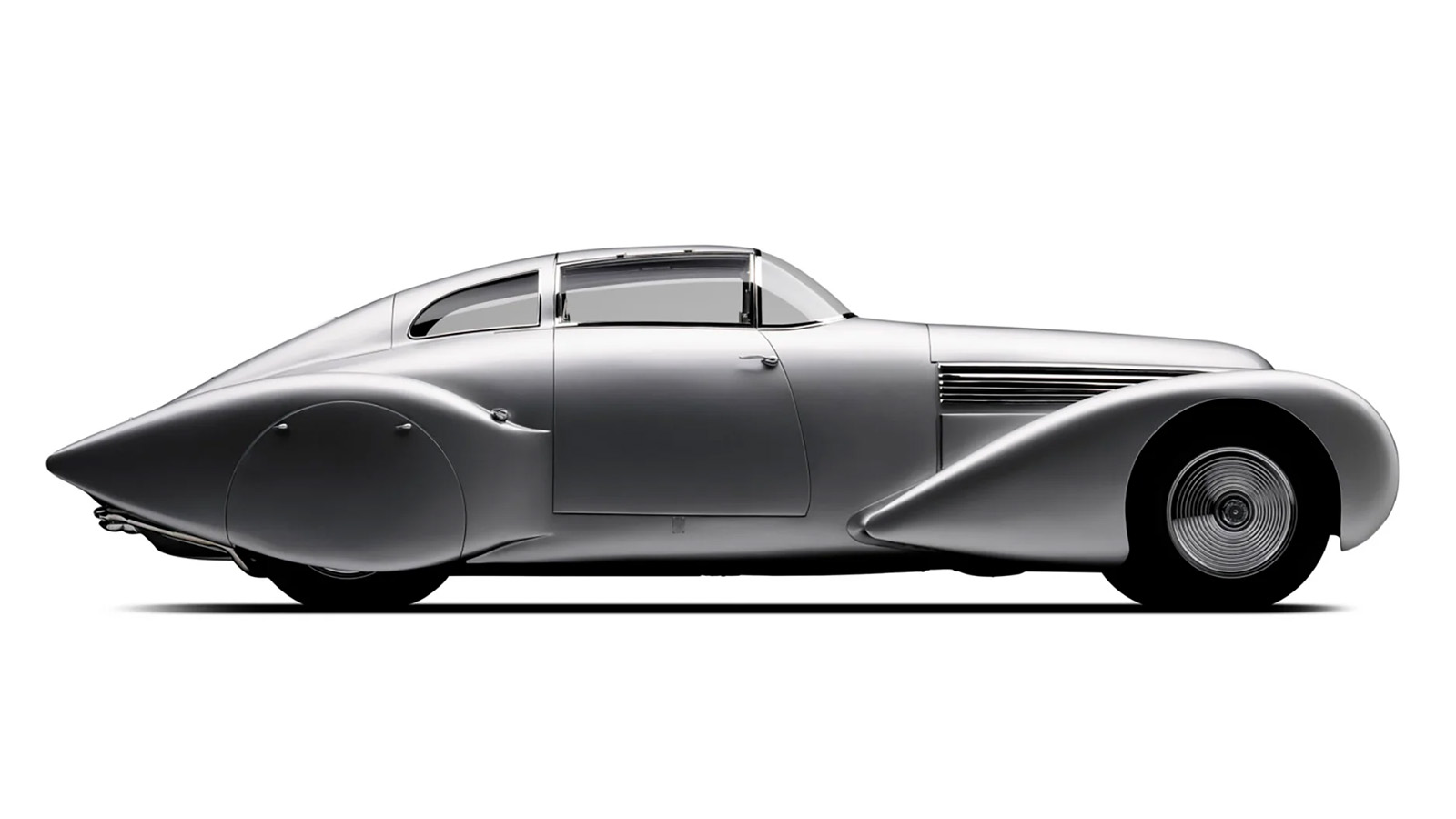 The Xenia was named in honor of her, which may be why the new wife didn’t care for the car so much, so it never really got the attention it deserved when it first debuted. That gorgeous work of art today resides in the Mullin Automotive Museum in Oxnard.

Interestingly, Dubonnet commissioned an earlier Hispano Suiza that has become the most famous Hispano Suiza in the world, a stunning wood-bodied 1924 Hispano-Suiza H6C “Tulipwood” Torpedo, a car that just sold at auction for over nine million dollars at Monterey Car Week.

As we approach the purple, re-born Hispano Suiza, its presence is truly amazing. It absolutely stands out in dramatic fashion as if it were a car from the 1920s and 30s — that incredible era of coach-built automotive works of art. Going through the car feature after feature, the design is quite frankly breathtaking, sometimes controversial, but certainly never boring. 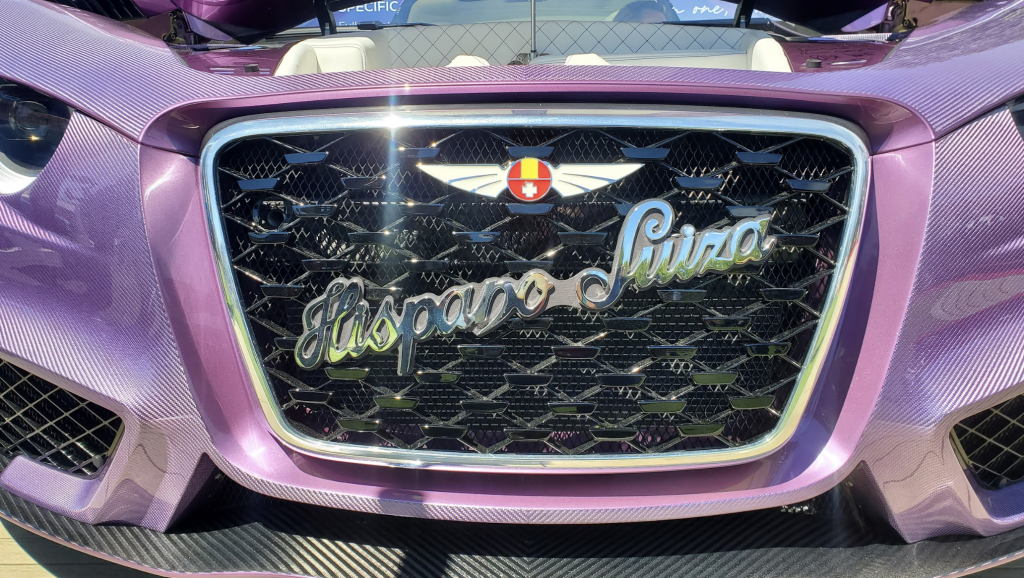 [Editor’s Note: I personally think the rear end looks stunning. The front, though — there’s a lot going on with that grille. Definitely not boring, and certainly controversial, I’m not sure it works for me, but that doesn’t make the car any less interesting. -DT]

One of the coolest things we learned while at the stand is the legitimate history of this Hispano Suiza. While some brands’ history has been purchased (Spyker in its current form was founded in 1999, and DeLorean comes to mind and now that I think about it, you could say the same about Dodge), Hispano Suiza is apparently still in the same family as the founder that started the brand in 1904. Hispano Suiza was started by a group that included a Spanish entrepreneur named Damien Mateu, and a Swiss engineer named Marc Birkigt. Now the great great grandson of Mateu is once again the president. In fact it is his mother, Carmen, who wanted to restart Hispano Suiza in honor of her grandfather, for whom this car is named. So I think it is absolutely wonderful that their history is legitimate and continual. 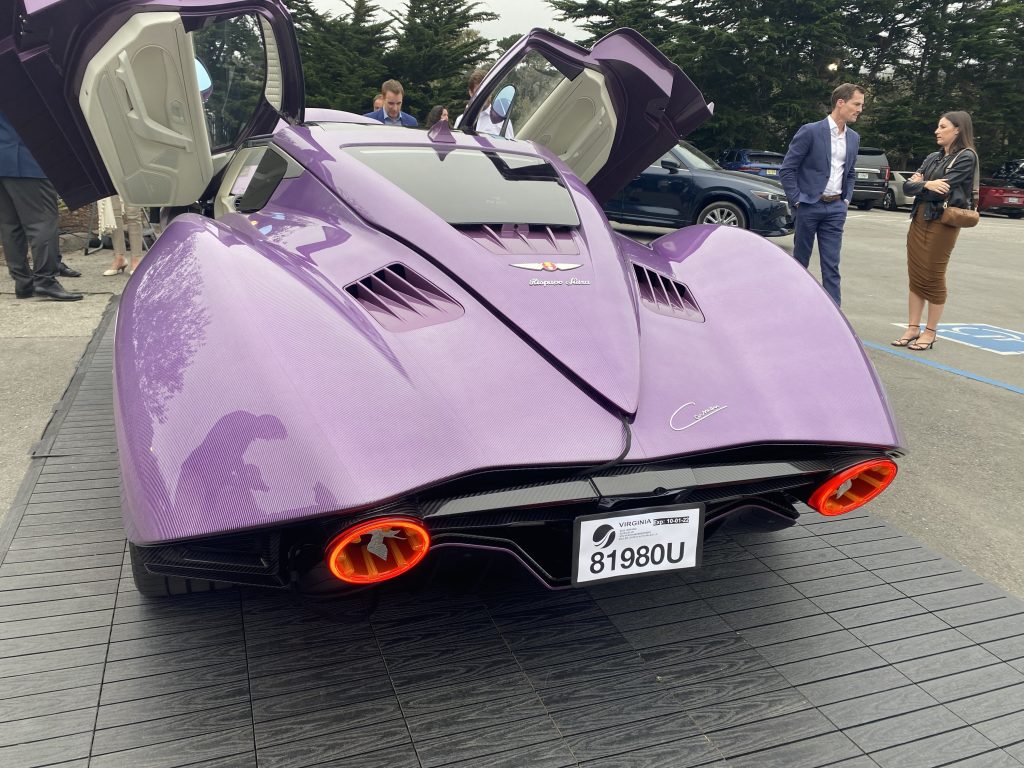 So how do you relaunch a historic luxury brand? With a new hypercar, of course. While many manufacturers are coming out with their last great ICE that the super wealthy are gobbling up, I appreciate that Hispano Suiza is going all EV. It’s also fascinating that the EV platform is being designed and the technology being built by Hispano Suiza’s parent company, Grup Peralada, so that the entire development of the Carmen is “in house” and not a platform being purchased and reskinned. Or at least, that’s what the company’s spokesperson told me.

The stats sound amazing: 1200 horsepower, up to 848 foot-pounds of torque, zero-to-60 in under three seconds, and an estimate of a range of approximately 250 miles per full charge, which is really fantastic for this kind of car.

But of course the drawback of a show is not being able to drive the car itself and see if the promises they make are actually true. So when I received a call on Sunday as I drove back from Pebble Beach — a call during which I was asked if I would like to see the Hispano Suiza Carmen up close and spend some more time with it — of course I said yes. 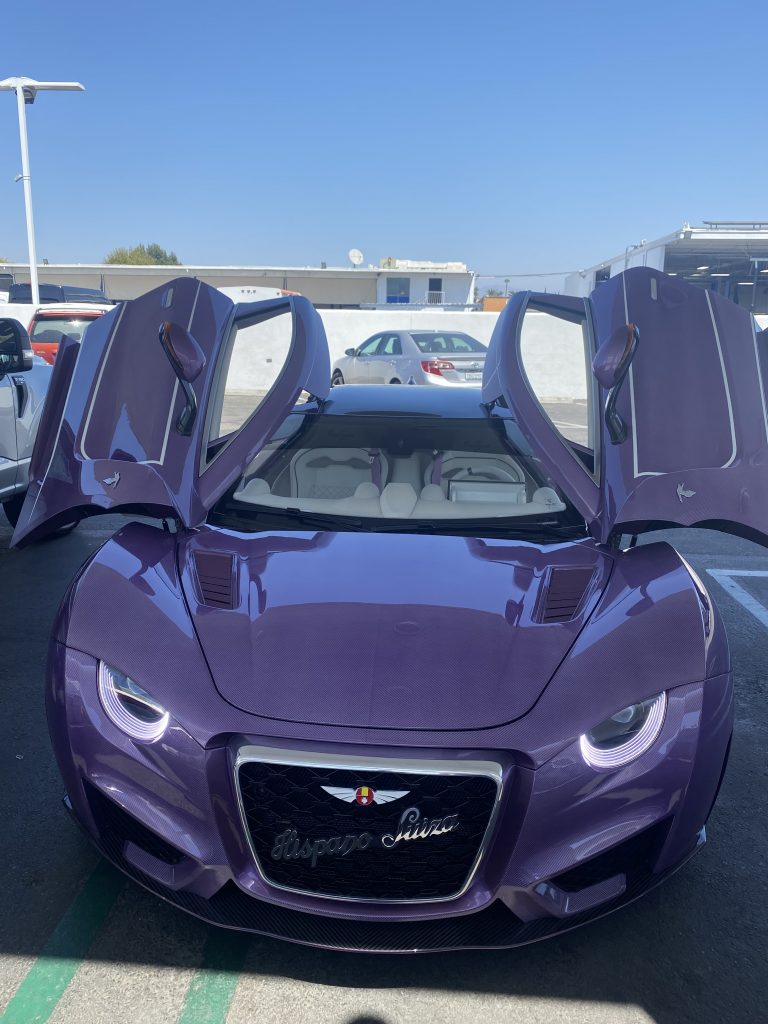 For me, the Carmen stood out amidst some of the most beautiful cars in the world at the Quail, so seeing it in the Galpin parking lot was really quite striking! I had a chance now to go through the car with some detail and find some of the more fun features about it. 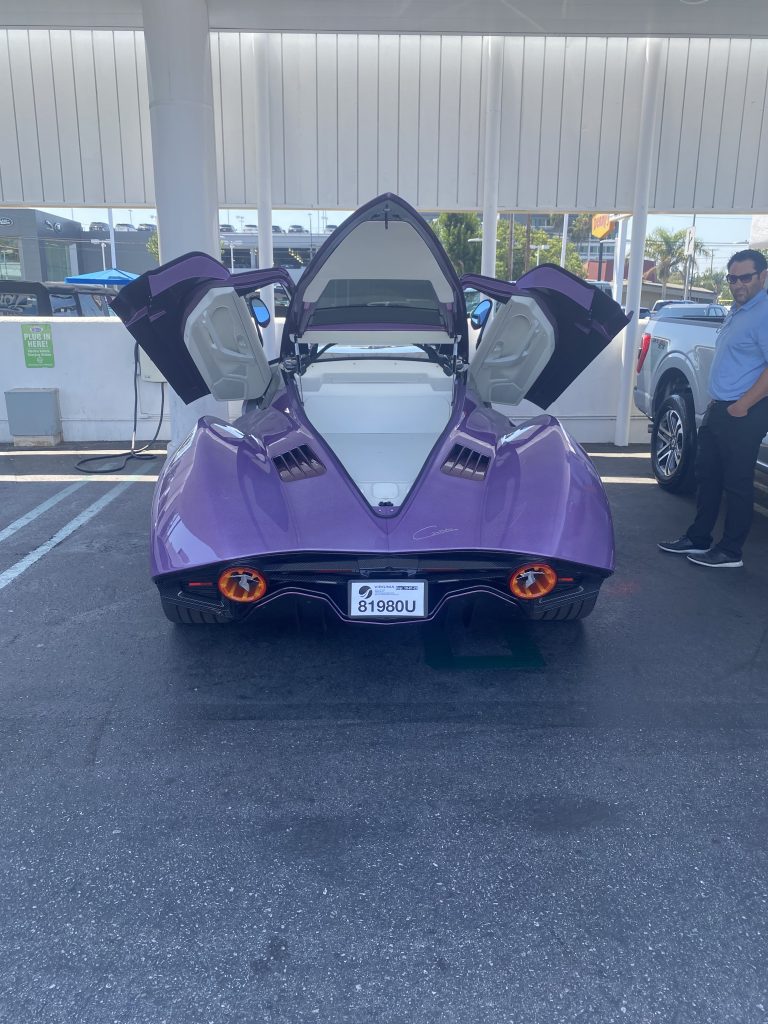 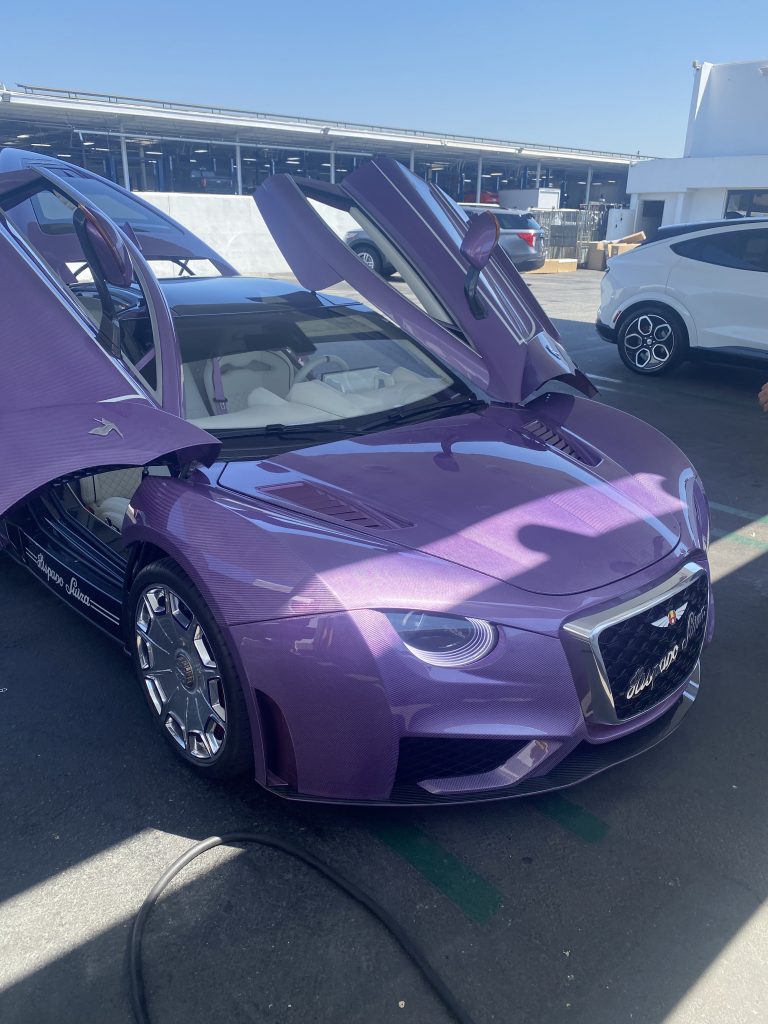 The interior materials were what you would want to have in a $1 million car, with beautiful white leather stitched and piped in matching purple. The doors opened effortlessly with a push of a button in a very cool fashion similar to a McLaren. It’s not quite as cool as the Dubonnet Xenia pop out sliding door that was way ahead of its time (see below), but probably far more functional.

The entertainment systems and driver’s interface was unlike any other I’ve seen, but I didn’t spend enough time to be able to evaluate. (I’m not sure if it’s proprietary, but it wouldn’t surprise me if it were). 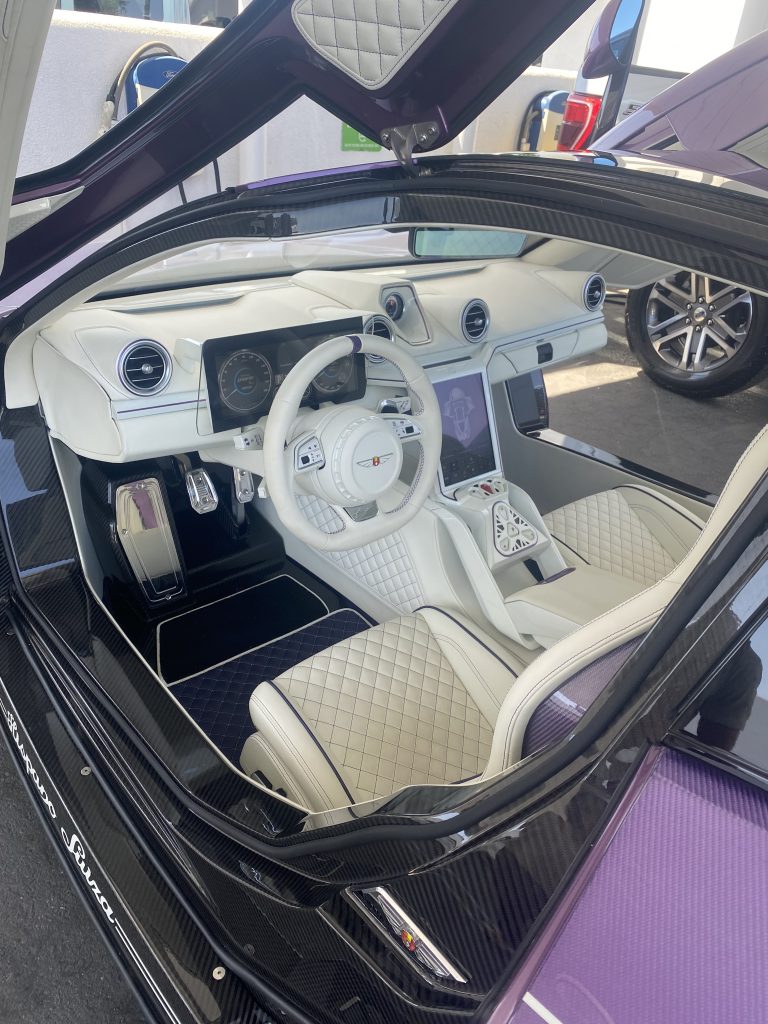 Then I heard the words I had been waiting to hear “Would you like to take her for a drive?”  Ummm…yes. Yes I would.

First of all, there’s always something a little bit disconcerting about driving someone else’s million dollar machine. Just a small scratch could mean thousands of dollars of damage; a little dent could be 100 large or more. Redoing exposed carbon fiber I imagine would only be a nightmare! But I guess that’s part of what makes driving a car like this really exciting.

Coming out of the parking lot, all eyes from everyone around are staring at this car. If you are looking to be subtle or to sneak in somewhere, this is not the car to do it in. At slow speeds, it felt very comfortable and quite frankly like quite a few other EVs out there.

Then I took it on the street and then onto the freeway: Wow! That’s where the fun began. The Carmen is blistering fast, especially hitting the “throttle” at speed on the freeway. It was neck jerkingly fast and smooth, but of course I couldn’t test the limits on the streets of Los Angeles. Off the line, the Carmen is fast, but not quite as fast as, say, a Porsche Taycan. When I asked, I was told that it was currently programmed to be conservative off the line as it is a customer’s car and they didn’t want anyone getting into trouble with it. I can actually appreciate that. 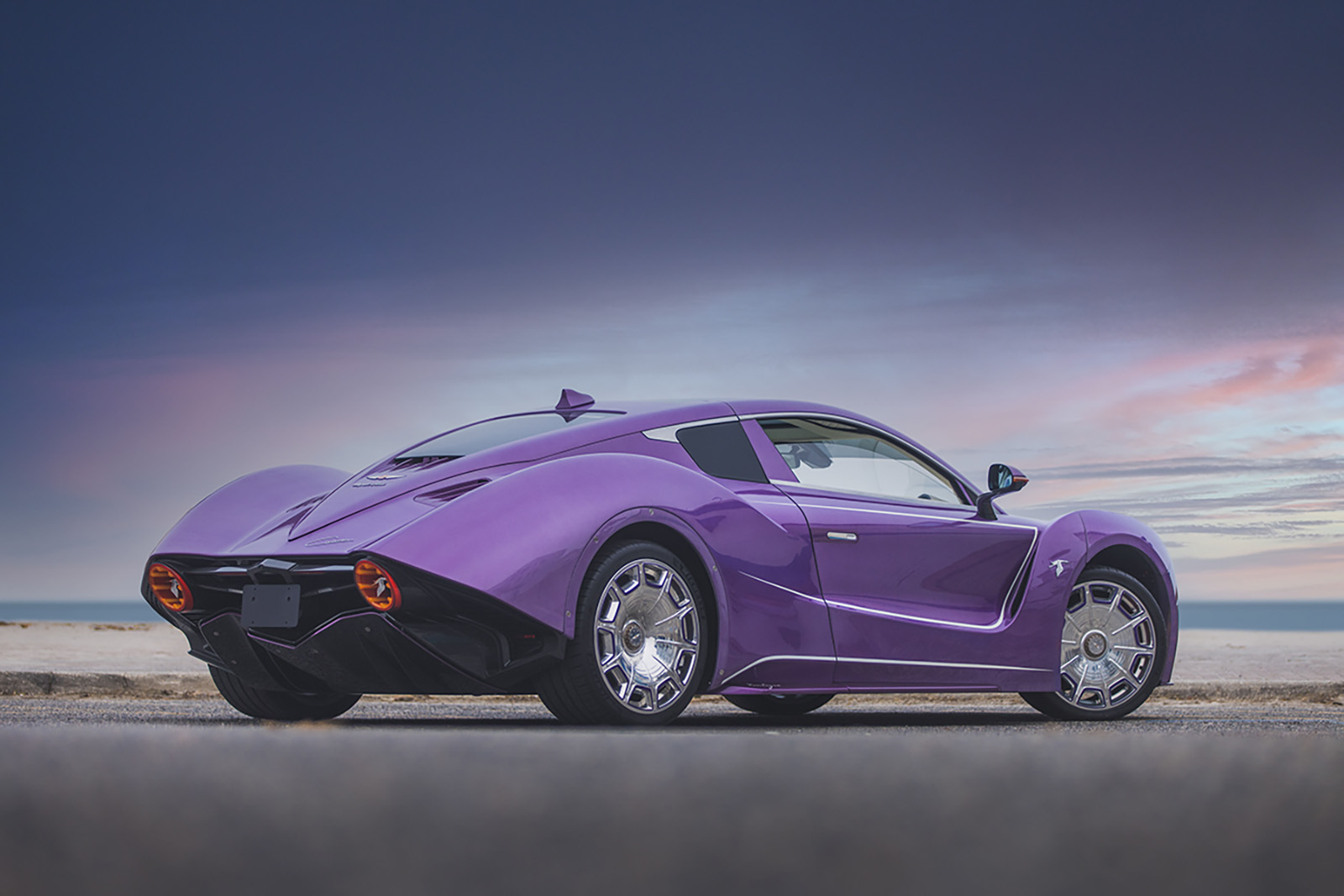 As far as handling, I didn’t get a chance to put it through the paces, or take it through the hills, but it seems to handle quite beautifully. I was told it is amazing on the track, and since they invited me back to try it on the track in Barcelona, I think I’m going to have to take them up on it — if nothing else, to just finish this review!

The braking was firm and responsive, and even with regenerative braking it always gave me a sense of confidence, which is critical for a car with this much power and weight. Speaking of which, the car does weigh about 3,747 pounds, which you really can’t feel due to its 1200 horses under the hood (floor?).

The most dangerous part of driving the Hispano Suiza are the other drivers swerving near me to get a look or a picture of the stunning automobile driving down the road. But that is always an issue whenever you’re driving something as achingly beautiful as the Carmen. Nothing else on the road looks anything like it – which is a wonderful thing, and not easily accomplished in the car-centric City of Angels. 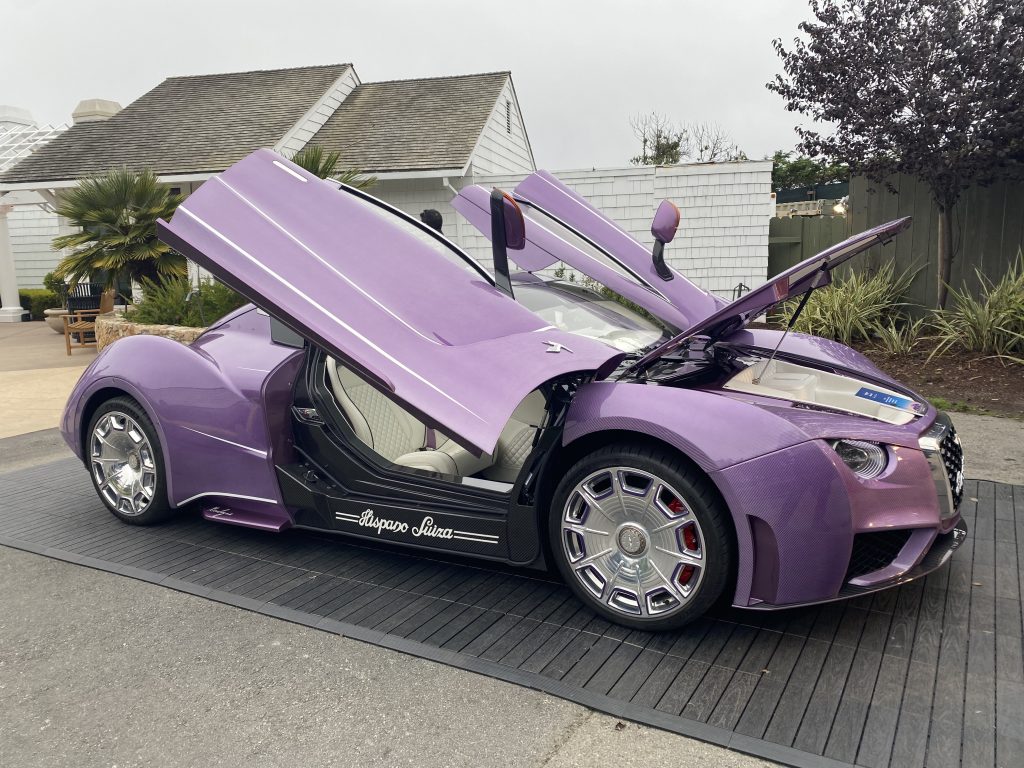 Overall, driving this car was a very unique experience. I’ve driven many EVs on the market and I’m always curious how each brand is going to differentiate itself now that distinctive engine sounds and shifting is effectively gone. I personally believe that the Taycan has Porsche DNA that you can feel as you drive a car. Even Ford’s Mach E has a hint of the Mustang’s soul in its DNA, and you can sense that when you drive the car — or at least that’s what I think.

Driving the Hispano Suiza was really unlike any other EV I’ve driven; probably the closest analogue would be the Jaguar I-Pace, but that really doesn’t do it justice. Smooth, stable, powerful, confident, and exhilarating are all words to describe driving the Carmen.

So while my time was limited driving the car, the good thing is all I want to do is drive it again! So hopefully I’ll be able to take them up on their offer and join them in Barcelona.

Only 24 of these works-of-art are going to be commissioned, making it more exclusive than just about anything else out there. Each is hand built to your own specification, and my guess is they don’t say “no” much, if your checkbook is out and your vault is full. Light-colored, exposed carbon fiber cars can be especially tricky, but they seemed to have pulled it off flawlessly in this gorgeous shade of purple.

I should note that the owner of this Carmen, Michael Fux, tends to have the same fondness for fuchsia exteriors and white interiors as I do.

With its authentic history, original and beautiful-if-controversial design, and unique BEV technology, Hispano Suiza may not only be a car from our past, it may also be in our future. I can’t wait to see where the brand goes from here.

Co-Founder of The Autopian and President of Galpin Motors and Galpin Autosports. The only man (alive) to have flipped two microcars and crashed a car from the 19th century in the 21st century.
Read All My Posts »
PrevPreviousI’m Driving The BMW i4 M50: What Do You Want To Know?
NextTwo Pilots Reportedly Threw Hands Aboard An Air France Flight, Raising Some Serious Safety ConcernsNext