Small Block Chevy Or Straight Six Ford: Which Work Truck Is For You? 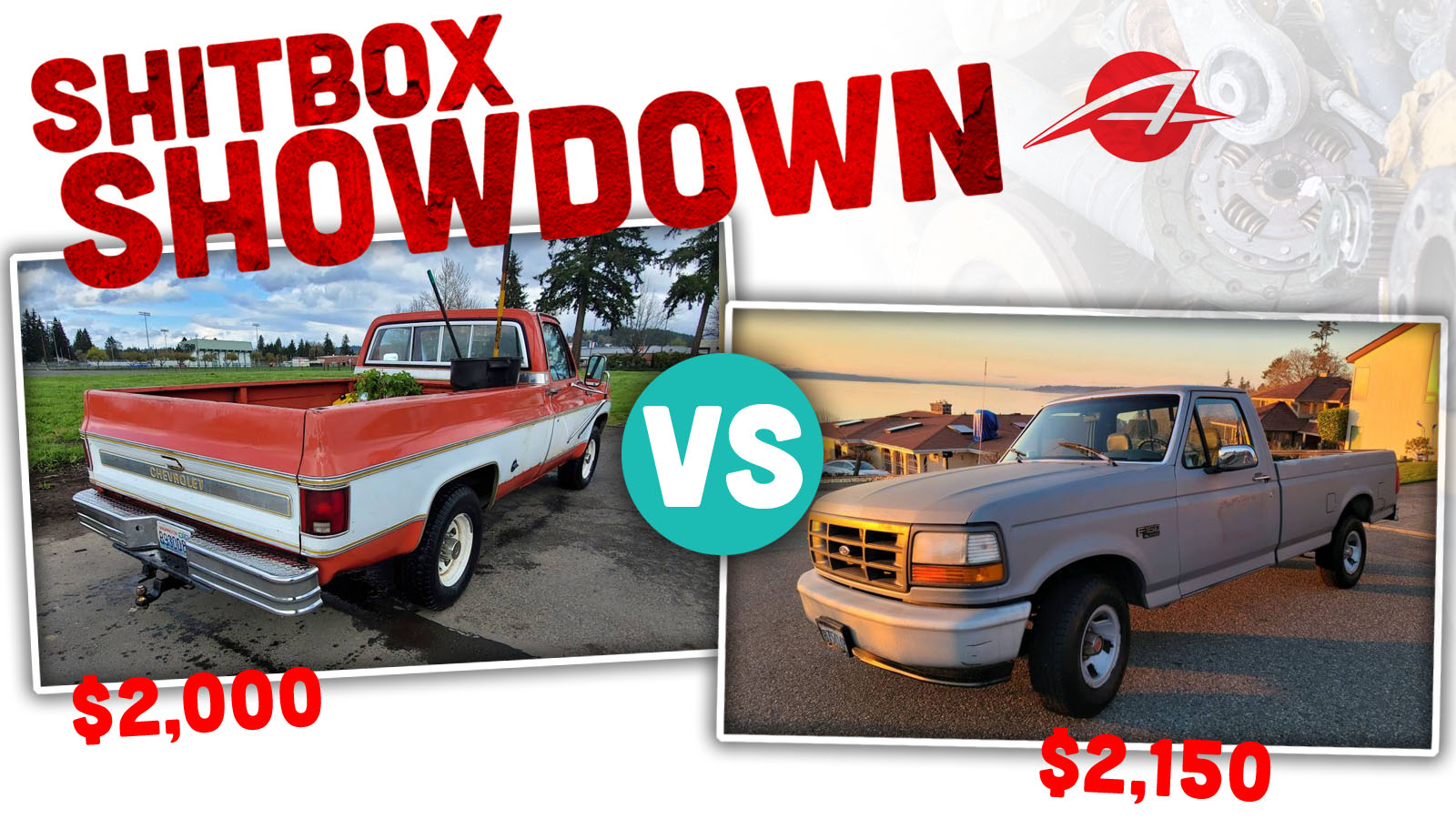 Today on Shitbox Showdown, it’s truck versus truck as we look at two beat-up stuff-haulers, and decide which one is the better motorized pack mule. But first let’s see how yesterday’s Chrysler K-cars fared:

The wagon has it, it seems. And it also seems everyone has a K-car story; those little boxes were such a huge part of the American vehicular landscape for so long that it was almost impossible to avoid them. Thanks all for the votes, and the memories!

These days, love ’em or hate ’em, Americans drive trucks. They’re everywhere. Ford sells more than 2,000 trucks per day on average alone, and its competitors aren’t far behind. And it seems like the machines get bigger and tougher-looking every year, while growing more soft and luxurious on the inside. Owners love to personalize them with all sorts of heavy-duty bric-a-brac, and increasingly inappropriate wheels and tires, in an attempt to say… well, honestly I’m still not sure what they’re trying to say. “I really love black powdercoating,” maybe, or “I can order from an accessories catalog like nobody’s business.”

But then there are other trucks, and you know them when you see them, that make a different, quieter statement about their owners: “I do stuff. I own furniture that I made. I’ve used a tile saw. I have different hammers for different purposes. I know how to wire a three-way light circuit and calculate board-feet of lumber. Now, if you’ll excuse me, that new half-wall in the living room isn’t going to sheetrock itself…” 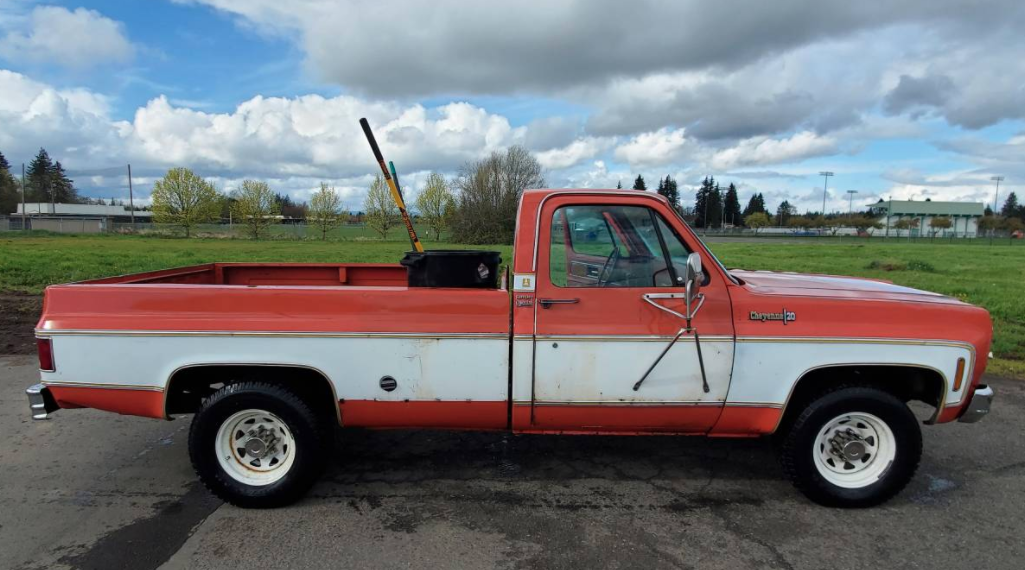 Runs/drives? Runs well, according to the seller

Ironically, this truck was not built for work at all. It’s a “Camper Special,” a 3/4 ton truck outfitted and optioned specifically to be used with a slide-in camper. The package added an extra 6″ of bed length over a standard 8 foot bed, a wiring harness for the camper, heavy-duty suspension bits including a thicker front stabilizer and, on this truck anyway, air shocks (which are said to work just fine). It’s powered by the same small-block/Turbo-Hydramatic combination that has provided motivation for everything from sedans to hot rods to box trucks. It’s good, proven stuff.

You also get this sweet “Camper Special” badge: 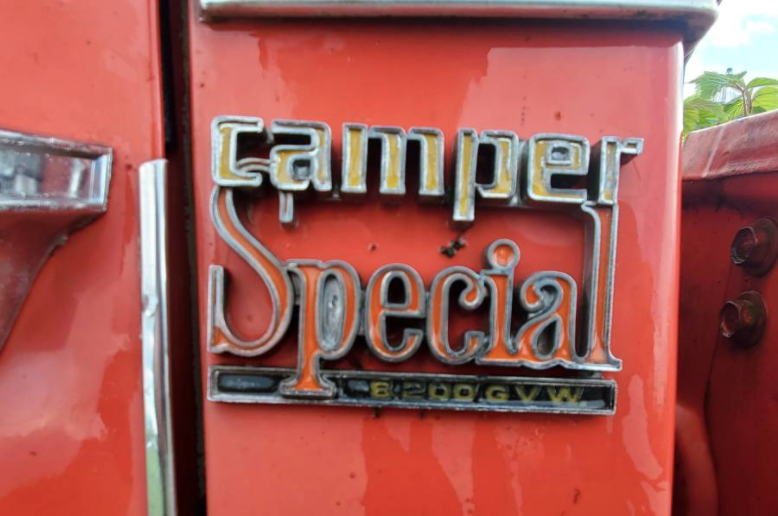 This truck appears to be doing retirement backwards, however, and now that its campground days are done, it has been put to work, as witnessed by the trash can and bits of greenery in the bed.

Cosmetically and creature-comfort wise, it’s less than ideal, with some damage to the interior (sadly not shown in pictures), which has apparently been mistaken by mice for a public toilet. (Though how the seller determined that it’s specifically mouse urine I’m not sure. Were there chemical tests involved?). “Keep in mind this truck is very photogenic,” the seller writes. “Keep your expectations low.” 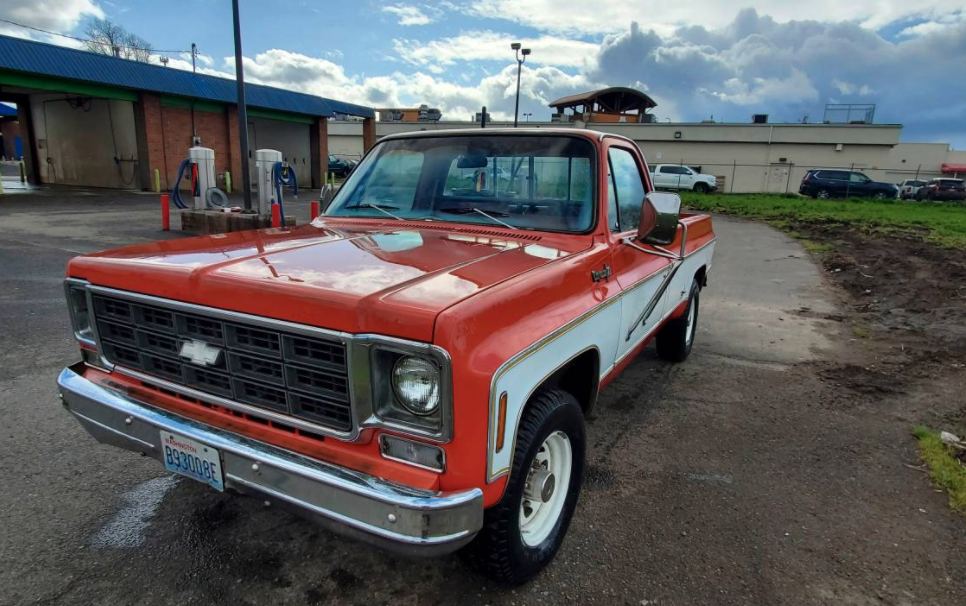 (As a quick aside, back when I drove my own beat-up Chevy truck to work daily, it was twice the backdrop for an impromptu amateur modeling photography session. I’d look out the window and see some trendily-dressed ingenue leaning against the side of the bed, while a wanna-be Mapplethorpe snapped pictures of her. The second time it happened, I went out and unlocked it for them so they could take photos with the girl at the wheel. “I just love the texture of this thing,” the photographer said. I just smiled.) 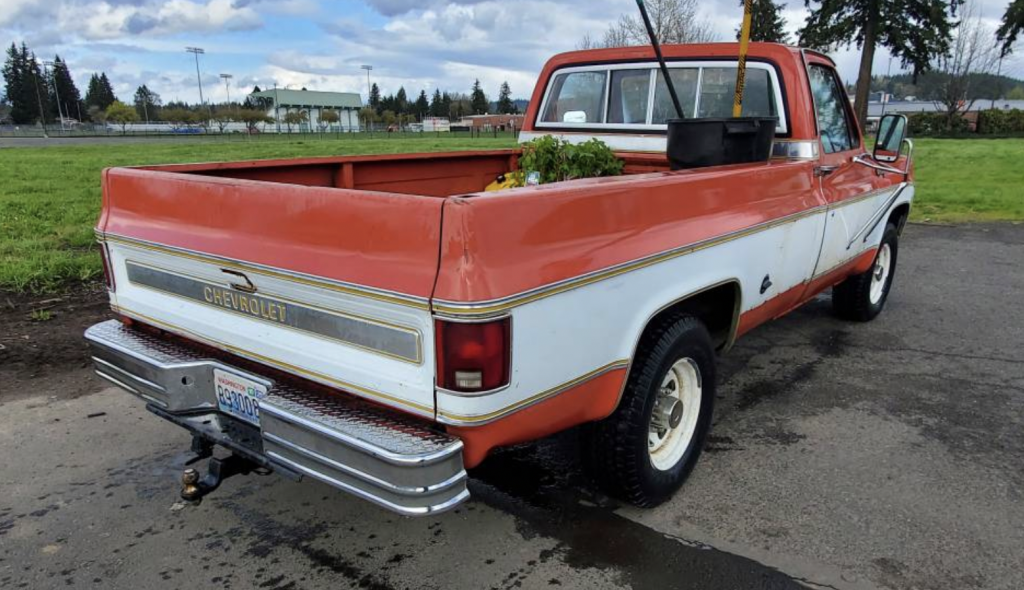 Despite the rodent issues, with all the heavy-duty stuff, an apparently clean bill of health mechanically, and that sweet orange and white two-tone job, this looks like an awesome rig to pull up to the lumber yard in. But let’s look at its competition before we make any decisions. 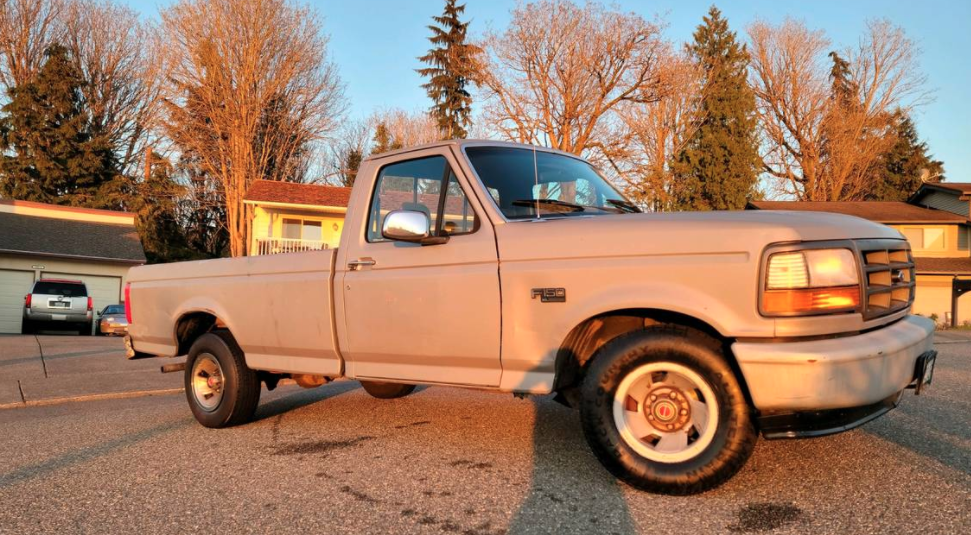 Runs/drives? Like a top, if the seller is to be believed

If there is such a thing as a “default pickup truck,” this is it. Ford’s classic F-series, from arguably its best era. Built like a tank and mechanically simple, with Ford’s clever “Twin I-Beam” front suspension and an inline six that is the stuff of legends, this is all the truck you ever really need. By 1993, the six was fuel-injected for improved drivability and slightly better mileage (though it’s still a thirsty beast), and the rest of the truck had been in production so long that pretty much all the bugs were worked out. This one has the Mazda-built five speed manual behind it, which, while it’s no Miata gearbox, is easier to live with than some trucks’ transmissions. 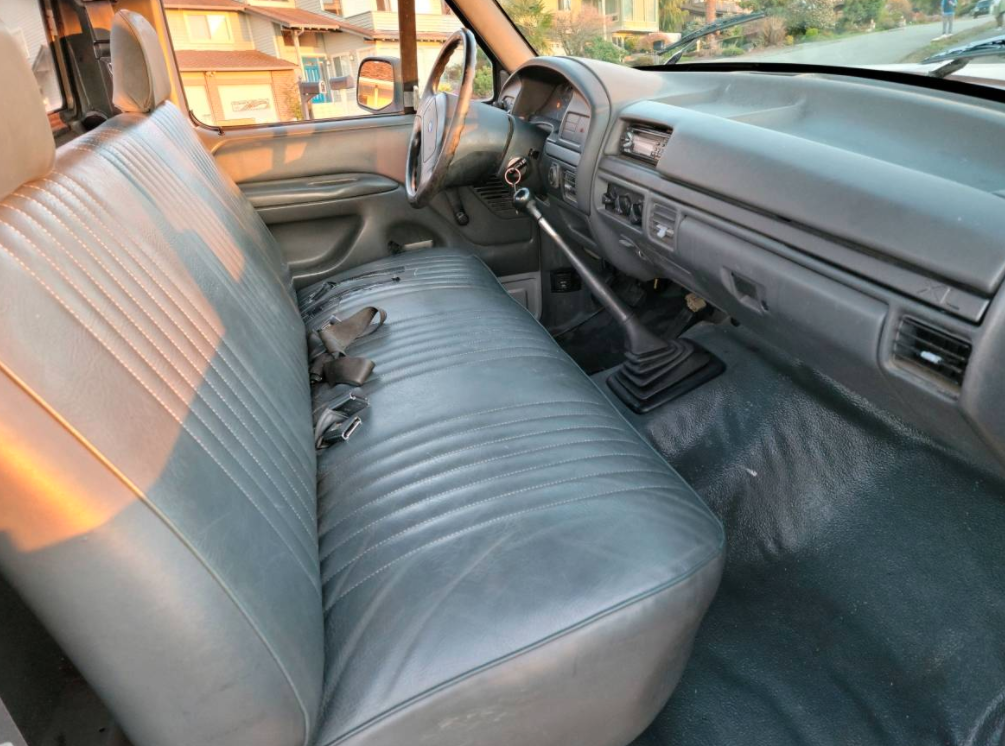 The seller = makes a point of how ugly the truck is, which I suppose is a point of pride for a work truck — that “texture” again. Honestly, it doesn’t look too bad to me. It’s dull and faded, and there’s a painted-over logo on the driver’s door that indicates it used to be part of a fleet. I’ve seen a lot worse. 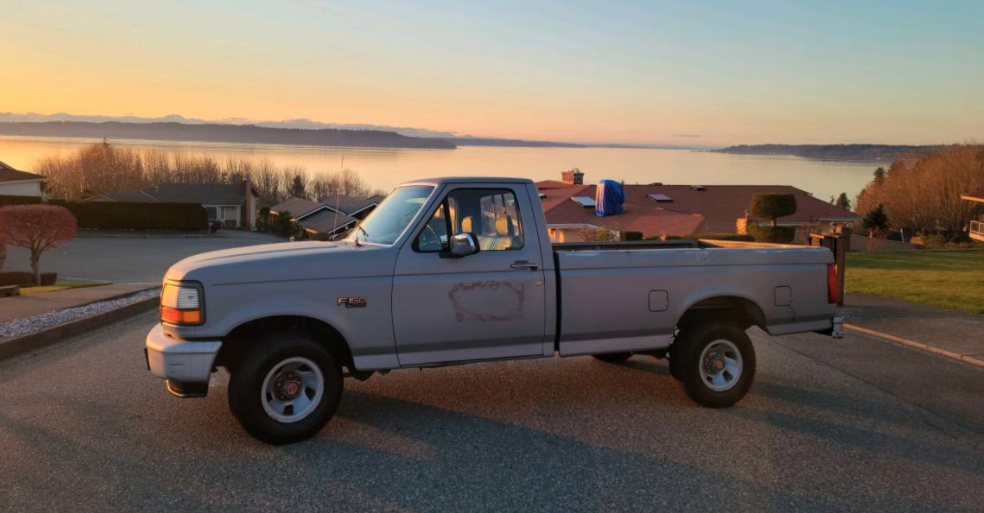 Inside it’s all work truck, with a vinyl bench seat, rubber floors, and crank windows, though apparently it does have AC, which is nice to have after a long hot day at a jobsite.

There isn’t a lot of information to go on about its mechanical condition, but these are about as complicated as an anvil, and built just about as strong. At 200k, it’s about half to two-thirds the way through its service life, from what I’ve seen of these trucks. Just treat it right, and it’ll keep doing its thing for years to come, like a good tool should.

So there they are. Two good old honest trucks, in slightly varying flavors. Which one do you want?

Read All My Posts »
PrevPreviousCold Start: Something About The Name Of This Car Feels Wrong
NextHow A Professional Car Designer Would Fix The Ugliest Truck In The World: The Fiat FullbackNext