Facebook-f Twitter Instagram Rss
Menu
Menu
Home » With A Heavy Heart, I Regret To Inform You That The Fantastic Hyundai Veloster N Is Dead

With A Heavy Heart, I Regret To Inform You That The Fantastic Hyundai Veloster N Is Dead 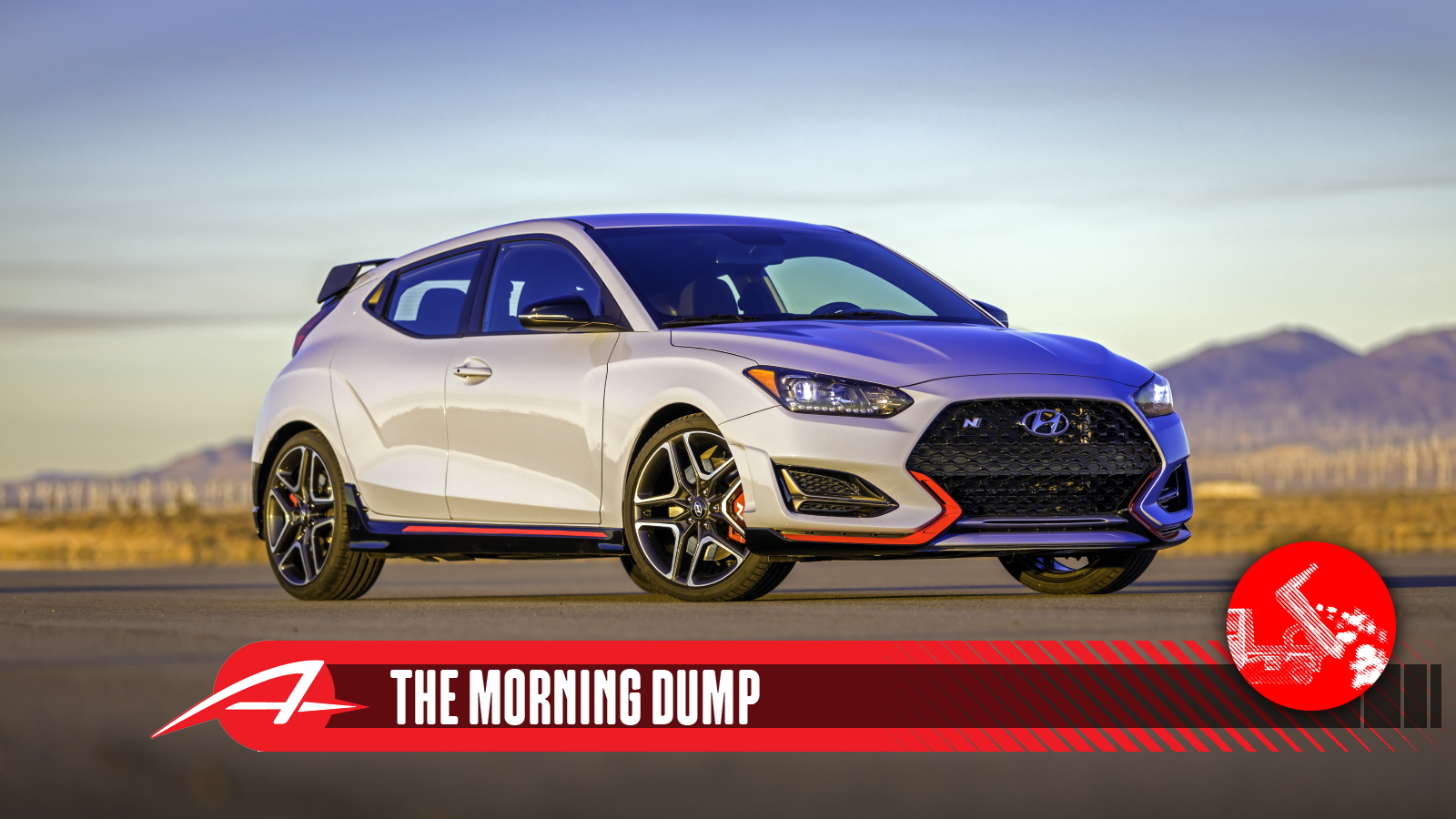 Hyundai kills a few models including the Veloster N, Ford does away with brochures, BMW introduces crappy paint. All this and more on today’s edition of The Morning Dump.

Hyundai Puts A Few Nameplates On The Chopping Block

With supply chain issues still weighing on the automotive industry’s chest, automakers may find themselves pumping the brakes on low-volume, low-margin vehicles. As such, it shouldn’t be a huge surprise seeing Automotive News report that Hyundai has taken the chance to eliminate from its lineup some slow-sellers, and cars effectively replaced by better ones. I won’t lie, there will be some that I’ll be sad to see go, starting with the Veloster N hot hatchback.

The Veloster N was always a bit of a strange proposition. On the one hand, it wasn’t a brilliant hatchback. The asymmetric door situation hampered practicality, as did the four-seat configuration and the bizarrely high liftover height for the cargo area. On the other hand, the Veloster N excelled as a hot hatch. It was as obnoxious as half the Jackass squad, had the ride quality of a Big Wheel, crop dusted pedestrians with its loud exhaust, and did all the wonderfully anti-social things you want a hot hatch to do. Every single moment I’ve spent behind the wheel of a Veloster N was one of pure, unadulterated joy. While I will concede that the Elantra N is a better car for less money, the Veloster N fills a beautiful niche between the low center of gravity of the Elantra N sedan and the practicality of the Kona N crossover. Still, the SCCA classes the Kona N crossover in D Street, so weekend warriors needing more practicality than an Elantra N can still have a bit of fun. Godspeed, Veloster N. We’ll miss you.

I’ll also really miss the Hyundai Accent because it’s genuinely honest transportation. It starts at $17,740 including freight charge, gets an honest 36 mpg combined, and definitely doesn’t feel crappy. It’s a perfectly good car that makes no qualms about its price-conscious mission yet doesn’t penalize consumers looking to save a buck. What I likely won’t miss so much is the Ioniq, the Prius-esque electrified hatchback Hyundai launched way back in 2016. While it’s still adequate economical transportation, it’s a bit long in the tooth. The all-electric Ioniq was axed last year when the Ioniq 5 came in to make the Kona Electric Hyundai’s entry-level EV, and the Elantra Hybrid largely fills the role of the Ioniq Hybrid. While it’ll be sad to see some Hyundai models go, there’s some small solace in knowing that not all consumers considering these recently-discontinued models will end up completely displaced.

Moving onto a less critical death but nevertheless a sad one, CarsDirect reports that Ford will no longer be making brochures for new models. Indeed, Ford seems to have phased out both print and electronic brochures starting today, as Ford’s website suddenly seems absolutely devoid of 2022 model year brochures. While dealerships could still order printed materials as recently as yesterday, the next batch being shipped to dealerships might just be the last American Ford brochures ever. Now, I know that printed materials are wasteful, inefficient, and generally get tossed in the recycling, but I feel like moving to discontinue brochures is a bit shortsighted.

For one, think of the print designers that pour their hearts and souls into these brochures, wrestling the bear that is Adobe InDesign. There’s so much talent going into brochure arrangement that discontinuing brochures feels like a waste. Furthermore, manufacturer spec hosting for older models isn’t great, and it’s nice to see claimed measurements directly from OEMs. Properly-archived print brochures are a great way to keep accurate specs alive. Finally, there’s the pure joy in print. Call it the little collector in me, or nostalgia for childhood wonder, but there’s just something so special about a tiny little book about a car. Even if it’s directly from the manufacturer, there’s something lovely about thumbing through thick, glossy pages, brand new interiors preserved forever in ink.

Toyota’s Having A Hard Time With Fasteners

Look, it’s not been a brilliant few weeks for Toyota and fasteners. First the bZ4X electric crossover got recalled for wheels that might come loose, now the brand new Tundra full-size pickup truck gets hit with a recall over axle shaft bolts backing off. You know, there are many fasteners I don’t want backing off on a vehicle, and axle flange bolts definitely qualify. Let’s take a deeper look at this recall to see exactly what’s going on.

See, the new Tundra’s rear axle shafts are held into the solid axle housing by a series of nuts on the axle tube flanges. Fairly standard stuff, right? Ford’s iconic nine-inch rear end used in all sorts of aftermarket and classic OEM applications uses a similar method of axle attachment, so it’s not like we’re dealing with anything hugely new here. Unfortunately, Toyota’s recall report states that the studs that the nuts attach to weren’t all pressed in properly, which combined with “greater than expected serration resistance,” led to a reduction in axial force. As such, a recall has been issued and NHTSA documents state that 46,176 2022 model year Tundras may be affected. When I say “may be affected,” that’s because rear ends arrive at the Tundra’s assembly plant pre-assembled, so it’s difficult to discern which faulty assemblies went into which trucks. Owners will receive notification letters by late July, so hang in there. I won’t lie, this is a fairly harrowing recall, so if you own a 2022 Tundra and feel a new vibration, stop driving immediately.

BMW Is Very Proud Of Its Crappy Paint

When you picture crap paint on a car, you may think of Chrysler’s infamous peeling issues, or red Mazda Miatas turned pink from the sun. However, BMW’s taking a very different approach on crappy paint, announcing that some new matte finishes will use paint based on crap. No, I’m not making this up. In a press release, BMW states explicitly that “Renewable raw materials such as bio-waste or waste from sewage treatment plants serve as the starting material for the paint.” Erm, right.

Don’t worry, extra-cost matte finishes on BMWs made in Leipzig, Germany and Rosslyn, South Africa won’t have a funny smell to them. Paint supplier BASF has a powerful and extensive refining process to clean up the base materials. What this does mean is that these new paints are expected to save more than 15,000 tons of CO2 by 2030, a properly big number if ever I’ve seen one. That’s roughly the weight of 3,309 GMC Hummer EVs, 2,268 African bush elephants, or one and a half deflated Goodyear blimps. As for how the matte paint holds up over time, we’ll have to wait and see. While matte paint in general tends to age like milk, BASF knows how to make good paint systems, so I’m genuinely not sure whether to expect any deviation from typical matte paint aging.

Whelp, time to drop the lid on today’s edition of The Morning Dump. Happy Friday, everyone! We’re heading into a long weekend which means that travel hell is officially here. Between obscene flight costs, rental car prices that feel like highway robbery, and brutal gas prices, this is one hell of a weekend to travel on. How are you holding up? Are you making adjustments, paying the premium, or simply canceling your travel plans altogether in an attempt to stay sane and not bankrupt? I’m taking the latter route, largely just planning to chill big at home.

Thomas is a Nu Rave-blaring, heel-toe downshifting, maple syrup-swilling, chassis-geeking, junkyard parts-hauling, floppy-haired scenester who's been writing about cars since college. His current ride is a 2006 BMW 325i with the six-speed manual gearbox. Instagram: @thomas.hundal Twitter: @thomashundal
Read All My Posts »
PrevPreviousHome Sweet Home-Away-From-Home: 1980 Dodge Beaver vs 1983 Ford Tioga
NextThe 2022 Acura NSX Type S Is A 600 HP Sendoff To A Car That Makes Dreams Come TrueNext