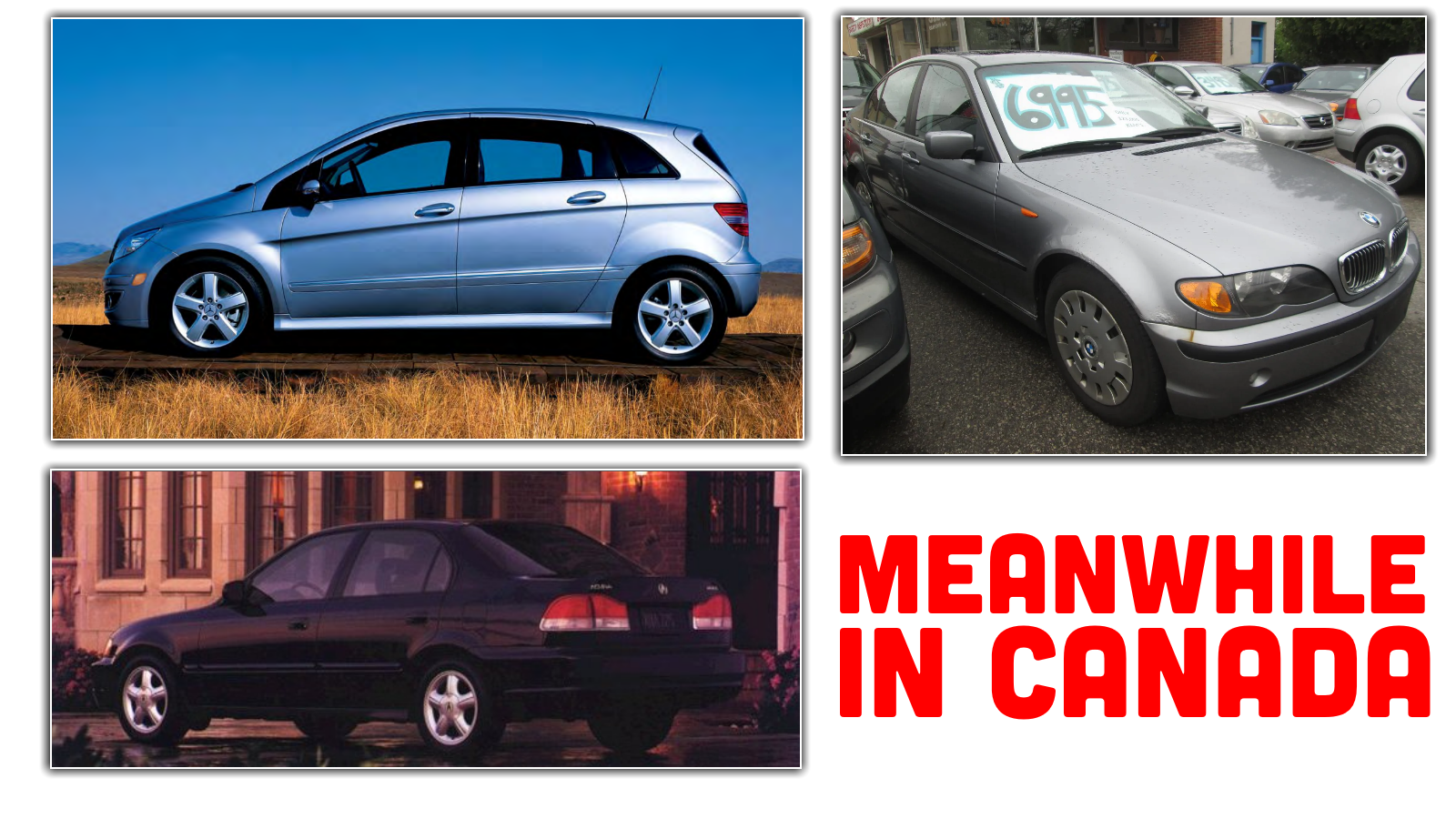 Canada can be a funny country. Despite being the second-largest country in the world based on land mass, we don’t really use all of this space. In 2009, the Canadian Broadcasting Corporation reported that 90 percent of Canadians lived within 160 kilometers (100 miles) of the American border. This poses a bit of a problem for road trips. If you’ve never driven across Canada, it’s hard to truly understand how absolutely empty most of it is. If you set out on a jaunt from Toronto to Vancouver, it’ll take roughly 20 hours of driving, or 1,900 kilometers of driving, to reach Ontario’s western border with Manitoba. As such, we tend to fly for domestic travel rather than drive. So what effect does a reasonably concentrated population and a proclivity to flying have on the Canadian automotive landscape?

For starters, Canadians tend to buy smaller cars than Americans. Swap Accords for Civics and Camrys for Corollas to essentially get our best-selling car charts. Secondly, base models are far and few between up here. Sure, every Canadian knows someone who only pops for the base model (hi Dad), but it’s often genuinely surprising whenever a manufacturer forecasts a higher Canadian product mix for base models than for loaded-up trims. Unsurprisingly, some manufacturers have put two and two together, offering tailored compact premium cars to varying levels of success. Here are three that Americans never got.

I can’t believe it’s not a Civic! Okay, maybe that’s a bit harsh, but the Acura 1.6 EL was a clever way of sidestepping the Integra sedan’s cost. See, back in the ‘90s, the Canadian dollar was in the toilet, and importing the Integra sedan was expensive. Acura still wanted a slice of the entry-level luxury segment but didn’t want the razor-thin margins of a product imported from Japan. Honda was already building the Civic in Alliston, Ontario, so a hasty restyling could produce a much more profitable product for Acura’s Canadian division. Honestly, Acura didn’t even have to do much work. Pluck the styling from a Honda Domani as every panel bolts straight up to a Civic, make some new headlights with amber reflectors, mold an Acura-specific grille, style some new wheels, and bam. One parts bin special that looks just different enough from a Civic to seem like its own thing.

However, the 1.6 EL’s real draw was on the inside. See, Civics of the ‘90s were economical, practical, and inexpensive, but not exactly bastions of refinement. To ensure that the wealthy children of Forest Hill and Yorkdale wouldn’t feel like they were driving a tall can of Molson, Acura beefed up the sound deadening while adding a bunch of optional features unavailable on a Civic. Stuff like keyless entry and seats made from the hides of beasts. Truthfully, the leather upholstery was quite nice, with just the right satin sheen to suggest Italian handiwork.

Power came from a single-jingle 1.6-liter D16Y8 four-cylinder engine with VTEC. This reliable lump was considered a leading cause of tinnitus on upper-trim Honda Civics with aftermarket mufflers. Still, hitting that VTEC switchover at 5,600 rpm on the way to unlocking 127 horsepower at 6,600 rpm fit well with Acura’s performance image. It’s not a ton of horsepower, but the 1.6 EL didn’t have a ton of weight to move. Plus, the D16Y8 helped keep 1.6 EL pricing low. The Toronto Star’s Wheels section reports a starting price of $17,800 in 1996 Canadian dollars. Adjust that for inflation, and you’re looking at around $30,380 Canadian right now. That’s like $23,271 in greenbacks, an absolute screaming deal.

So, did the 1.6 EL sell? Well, the Civic was and still is Canada’s best-selling car, so of course the 1.6 EL sold. It accounted for roughly 50 percent of Canadian Acura sales in 1997 and 1998, a wildly successful number. In fact, the outgoing Acura ILX can trace its roots back to the 1.6 EL, and 1.6 EL front clip conversions remain desirable in the Honda community today. Job well done.

While Acura sent a Civic to finishing school, BMW tapped into the Canadian entry-level luxury market by seeing how many features Canadians would sacrifice to get into a 3-Series. While the four-cylinder E36 318i was a bit basic for North American tastes, maybe a tiny inline-six paired with very few creature comforts would do the trick.

Yes, the Canadian-market E46 320i received a tiny 2.2-liter M54B22 inline-six cranking out 168 horsepower and 155 lb.-ft. of torque. Honestly, those aren’t dreadful numbers for 2001. Paired to a five-speed manual gearbox and BMW’s trademark rear-wheel-drive, it made for one seriously involving entry-level luxury car.

However, luxury may as well have been silent on the 320i. Standard equipment included seats, windows, and all the breathable air inside the car. Seriously, even cruise control was an optional extra. Also, don’t expect alloy wheels, heated seats, or a leather-wrapped steering wheel for that sort of money. We’re talking fairly barebones here.

Still, the 320i needed to be fairly barebones if BMW wanted to make a profit on its $33,900 list price. Adjusted for inflation, that’s $52,000 Canadian, a princely sum for a low-spec 3-Series. However, BMW’s party piece was the art of the lease. With reasonably strong residuals, the 320i saw a certain degree of success from Canadians looking for a slice of sweet European motoring. You can still find them for sale today in most large Canadian cities, like this one I found in Toronto. Take a look at that buttonless steering wheel in all its glory. In fact, the E46 320i was successful enough that BMW Canada gave things another whirl with the E90 323i, and that car sold unbelievably well.

And now for something completely different. Honestly, I’m not entirely sure who decided to sell the B-Class in Canada. After all, you don’t think of a tiny front-wheel-drive MPV with an available CVT when someone asks you to picture a Benz. Still, buoyed by early success of the Smart Fortwo and huffing the fumes of Canadian pragmatism, Mercedes-Benz quickly got to work preparing the B-Class for hockey run duty, and I’m somewhat thankful it did.

Honestly, the B-Class was a neat design. Its unique construction with the powerplant below the occupant cell gave it extraordinary interior room, and you could shift the B-Class yourself through a standard six-speed manual gearbox. Exterior styling is quite pleasant, like a shortened R-Class, and some of the detailing on the lamps and door handles was actually quite nice. The interior itself was the typical mid-aughts MB blend of soft-touch plastics and tightly-grained textures, so it felt an order of magnitude nicer than what Honda was offering on a CR-V. Sure, the B-Class wasn’t quick, but a starting price of $30,950 more than made up for that. That was just $150 more than a mid-range Honda CR-V EX.

Unfortunately, sales didn’t exactly take off. Sure, Mercedes shifted a few thousand each year, but the B-Class remained very much a niche product. Of course, it didn’t help that the B-Class suffered from widespread CVT failure. George Iny of the Automobile Protection Association reports seeing “repair bills in the range of $5,500 to $7,000” for a replacement CVT, no small sum on an entry-level Benz. Then there were the general build quality gremlins that would crop up, from electrical issues to interior rattles. The second-generation B-Class, launched for the 2012 model year, attempted to fix some of these issues but still wasn’t perfect. I worked at a Mercedes dealer in high school and saw issues with mundane features like windows and dome lights on gently-used off-lease examples. Interestingly enough, an electric variant of the second-generation B-Class made it to America, largely as a compliance car. Today, the B-Class has been effectively replaced in North America by the Mercedes-Benz GLB, a perfectly good small crossover with plenty of space and a very pleasant interior.

Would They Work Today? 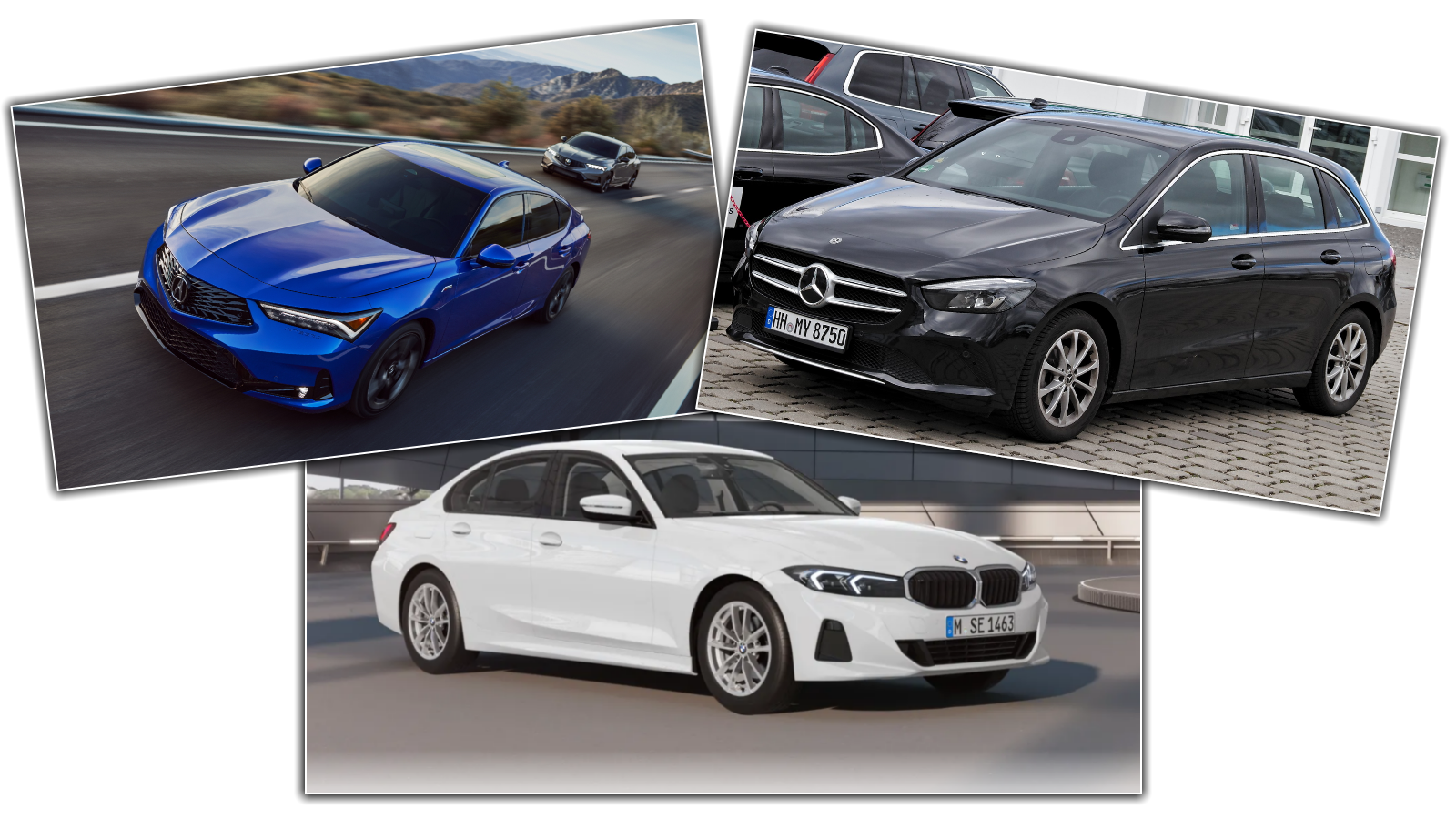 Well, maybe. Let me explain. In a way, the current Acura Integra is a spiritual successor to the 1.6 EL, and I’m not entirely sure about it. Twenty years ago, compact cars were basic, economical transportation. If you wanted, I don’t know, heated seats or automatic climate control in a compact car, you usually had to step up to a midsize car. Now though, toys are cheap, everything is premium, and the standard Civic feels nice enough to displace that part of the market. I’d love to be wrong, but I’m taking a cautious approach here. Switching lanes to the B-Class, I’m honestly amazed that thing got the nod for Canadian sales in the first place. It’s a funky, unique product, but it doesn’t have much of a sales case. Besides, subcompact crossovers are now a thing, often featuring high sales and good margins.

What might work is a stripped-down 3-Series. The Mini-based 2-Series Gran Coupe is not particularly attractive, while the 3-Series sells by the boatload in my neck of the woods. More importantly, BMW already has everything to build a cheaper 3-Series. The current European 320i uses a detuned version of the B48 turbocharged two-liter four-cylinder engine in our 330i, plus low-spec European models feature such cost-saving measures as a smaller infotainment screen, manual cloth seats, and 16-inch wheels. In the U.K., a facelifted 320i starts at £36,670 including VAT. Now, VAT is a roughly 20 percent tax, so let’s eyeball things and say we’re looking at £30,558.33, which converts out to roughly $36,448, or about $47,476 Canadian. Honestly, the old tactic of a low-trim 3-Series for Canada seems worth a shot.

Thomas is a Nu Rave-blaring, heel-toe downshifting, maple syrup-swilling, chassis-geeking, junkyard parts-hauling, floppy-haired scenester who's been writing about cars since college. His current ride is a 2006 BMW 325i with the six-speed manual gearbox. Instagram: @thomas.hundal Twitter: @thomashundal
Read All My Posts »
PrevPreviousThe Wildly Different Cars Named For A Type Of Ship Or A Thing That Cuts Hair
NextCold Start: Celica VarietalsNext