I don’t have a good explanation why, but lately I’ve been kind of fascinated by automotive homophones: cars that share a name. Just a bit ago I wrote about the two extremes of cars named Parisienne, and now I’d like to tell you about a few cars that share the name of, depending on what you prefer as a reference, a large 19th century merchant oceangoing vessel or an electromechanical handheld tool for trimming hair or fur, or both. This name has come up perhaps more often than you realize, and for a really strikingly diverse range of vehicles. The name I’m talking about, of course, is Clipper.

I’ve been aware of some of these cars for a long time, but the reason I decided to write about it now is because I just recently learned that a car I’ve been familiar with for years went by this name, at least for a short period and in specific markets. And it’s not a car that I think most of us associate with the Clipper name at all, which is why it’s so interesting. So let’s start with that one.

The One That Surprised Me: Volkswagen Clipper (Type 2) 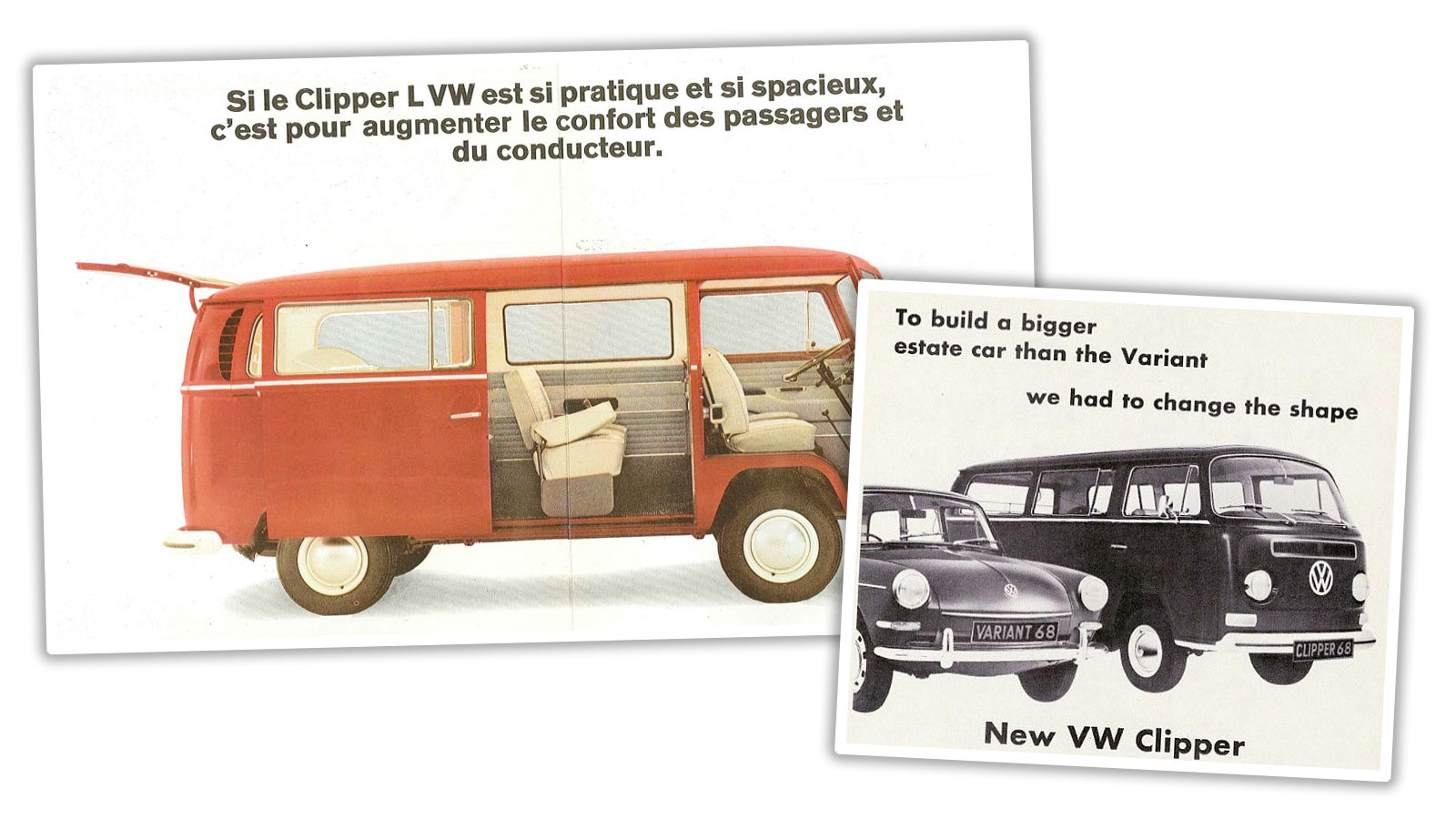 Wait, what the hell is this? VW once called the Microbus the Clipper? I can’t think of a name that feels less VW than Clipper, especially in this era (around 1968). Remember, the official name of the Beetle was the incredibly emotive and powerful “Sedan,” and they called what most people called a Bus or Microbus or Hippy Van a “Station Wagon.” 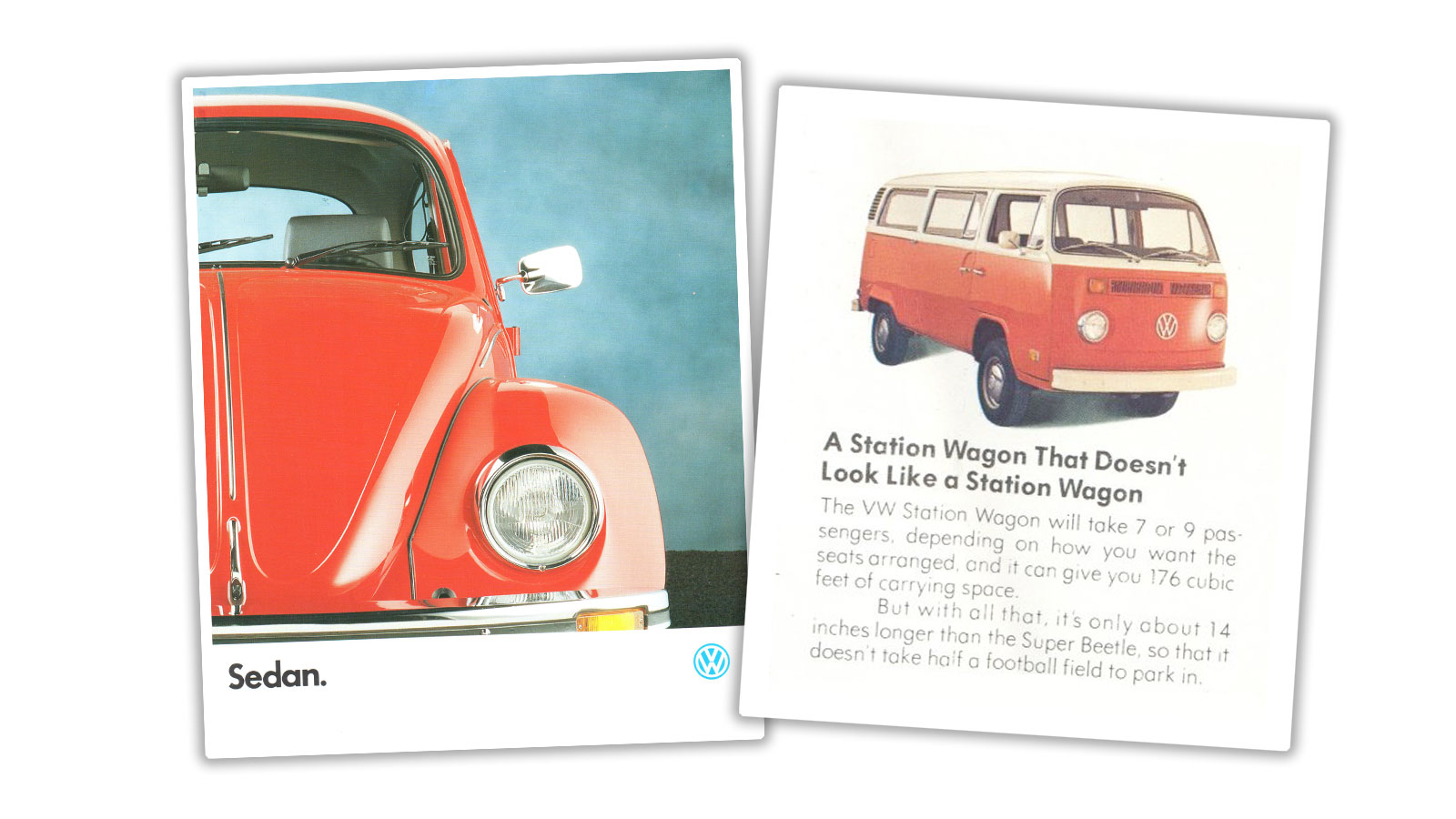 In context, “Clipper” for a Type 2 Volkswagen Transporter sounds terribly weird. So what the hell was going on?

It seems that VW wanted a special name for Deluxe versions of the passenger-spec bus, often with a big steel sliding sunroof, from around 1968 to 1971 or so. These buses had all the candy, as long as your definition of “candy” means some extra chrome strips on interior padded panels and door cards, a clock in the dash, and a few other useful items, like those bars that surrounded the interior luggage area.

I have never heard anyone actually refer to a VW Bus as a Clipper, even if it was of this trim spec, but it definitely was a thing.

The One I Knew About: Packard Clipper 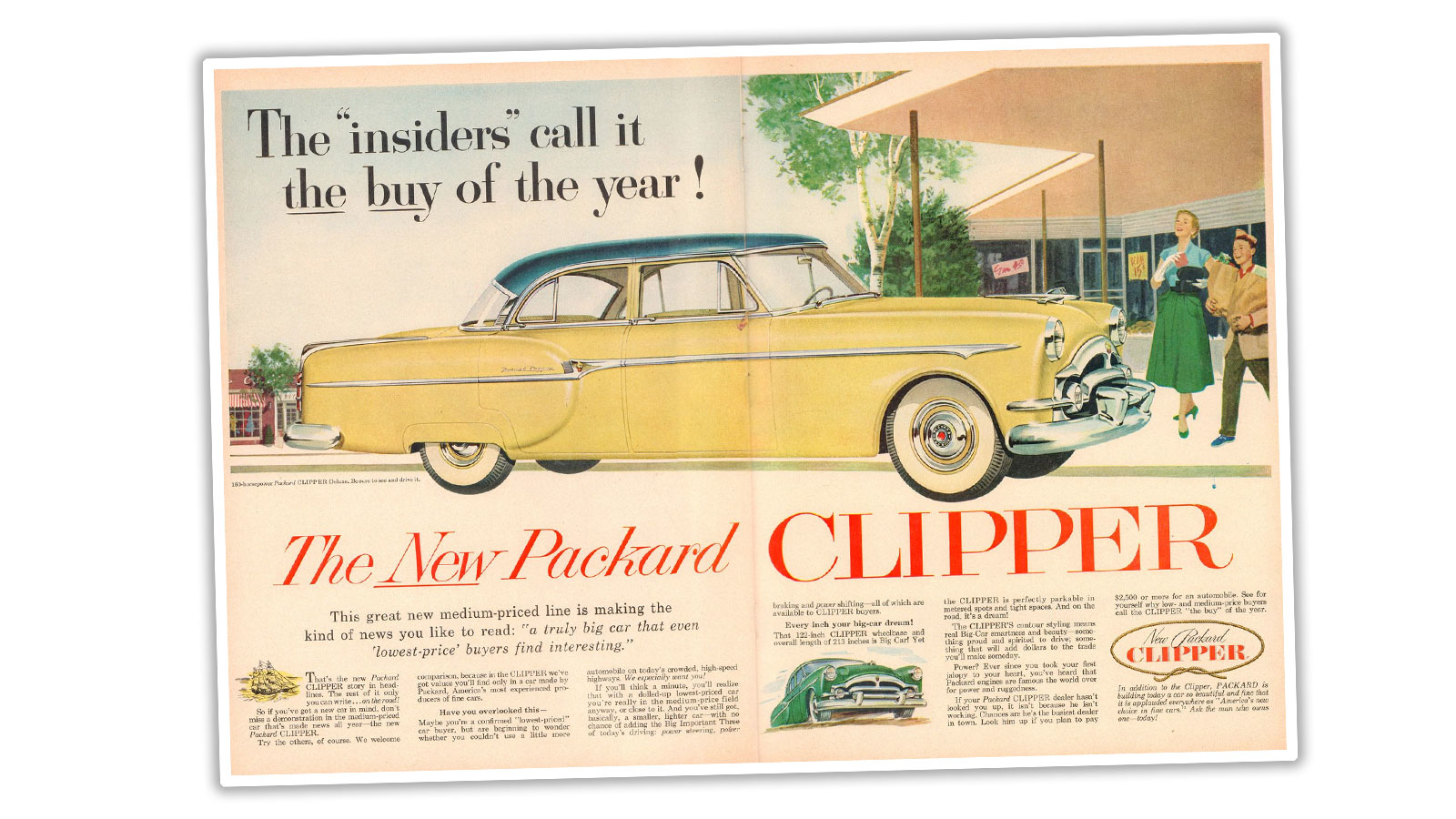 I think this is the one that most people would come up with if you asked them for an example of a car named Clipper, though I also think the set of people that would have any answer at all is not only tiny, but I bet almost all of them are reading this right now.

Packard started using the term “clipper” to refer to a general design language, but then used it to designate the low-end models in its lineups throughout the ’40s and into the 1950s. In 1953 it became a model range of its own, designed to be something that would compete in the mid range against more mainstream cars from Chevy and Ford.

In 1956, the Clipper name was spun off as its own independent brand, which was a strange call because Packard production of all kinds was shut down in July of 1956. Clippers came back as Packard-Clippers in 1957, but then they were badge-engineered Studebakers at that point.

The One That Now That I Think About It, I Have Seen Before: Allard Clipper 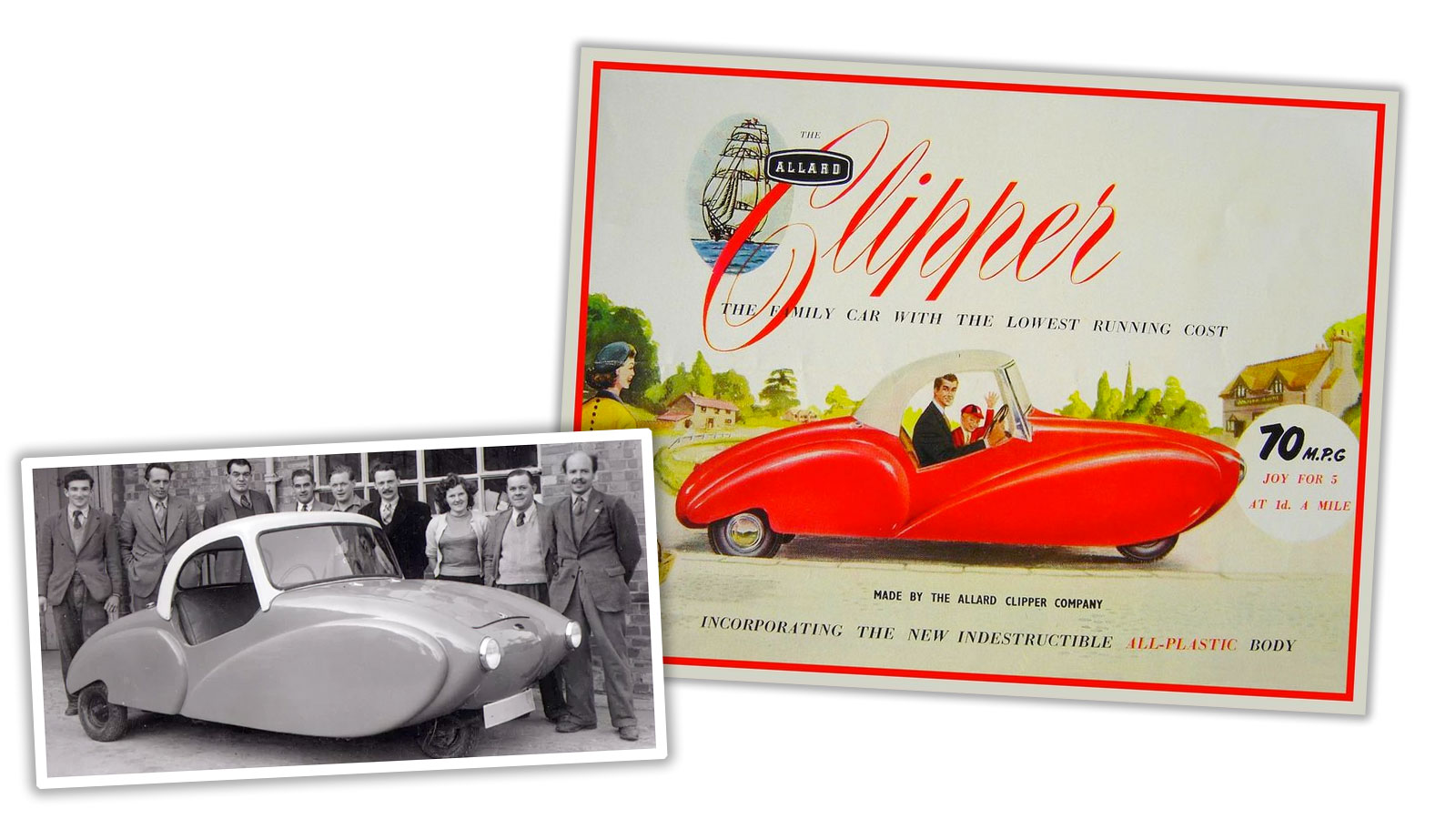 I think if you know of Allard at all, it’s in the context of some really fantastic British sports cars of the 1950s. Allards were impressive, fast sports cars in their day, which makes the contrast of this adorable plastic hunk of crap all the better.

Conceived in 1953 as a way to get in on booming postwar microcar demand in Britain and Europe, when people were broke but still had to get around, the minimalistic three-wheeled Clipper looked to fit the bill well. Designed by David Gottlieb, the Clipper would become Britain’s first fiberglass car, panels for which were laboriously made by one woman, Margaret Woolsey. The resulting car used a 346cc Villiers one-cylinder engine driving the left rear wheel only, and seems to have been plagued by cooling issues.

The car never really performed as was hoped or advertised, and speaking of ads, that one up there that claims 70 mpg appears to be using gnomes or leprechauns as models, because the car was, in reality, tiny.

Only about 20 were built before Allard shut the whole thing down in 1955. There only seems to be two surviving ones, one in the UK and one in Germany.

The One That’s A Truck: Nissan Prince Clipper 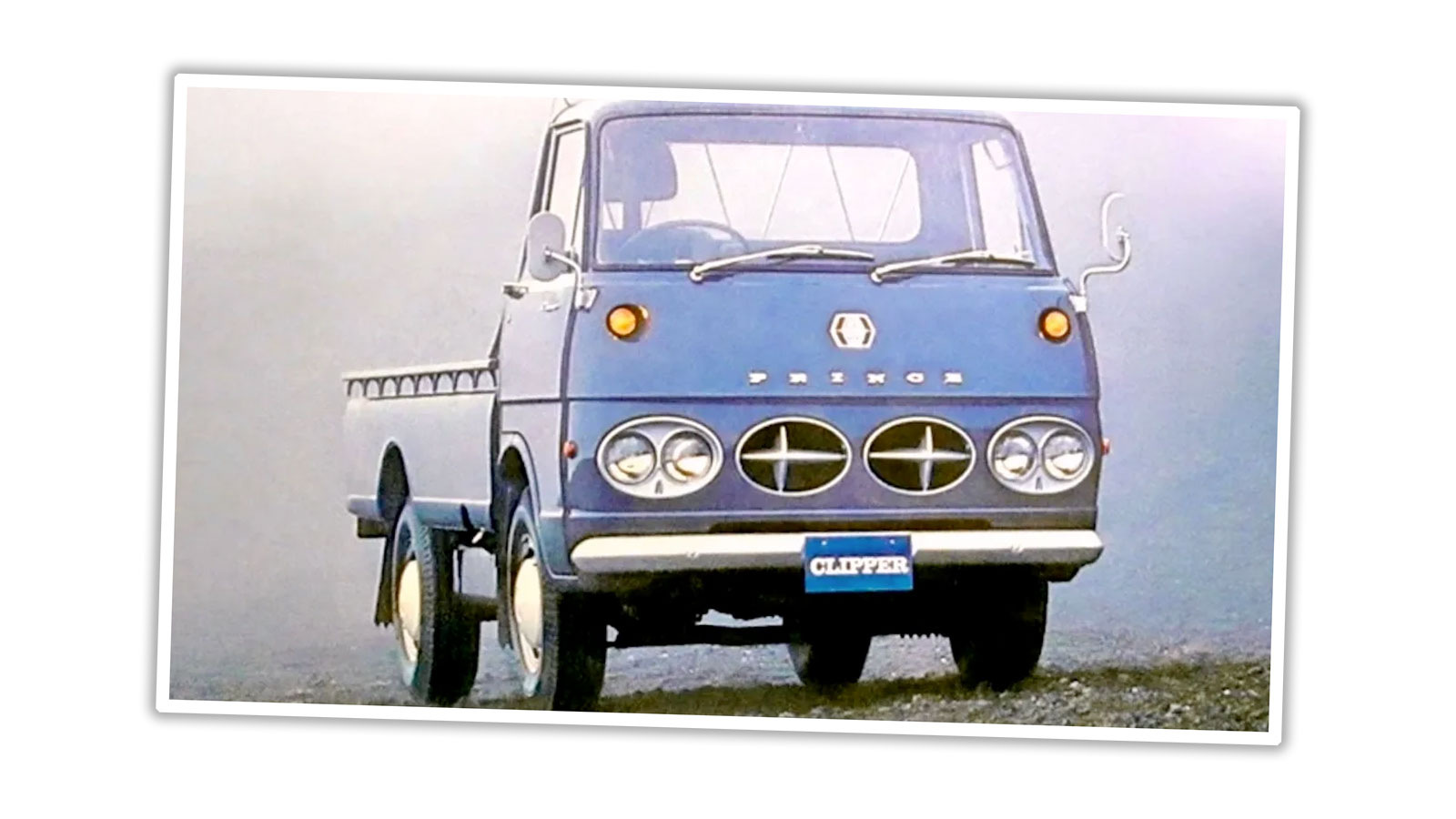 Prince was a Japanese carmaker that started making military hardware and airplanes, then moved into cars and trucks in the early 1960s, and was bought by Nissan in 1965. Nissan’s famous Skyline and Gloria models got their start as Princes, even. But we’re here to talk clippers, and there was a Nissan Prince Clipper, this unsually-designed cabover truck.

Look at that great front end, with the four ovals, the outer two tasked with casting light, the inner two dedicated to pulling air. The first era of Nissan Clipper trucks lasted from 1965 to 1972, and was re-born as a line of Kei-class trucks in the early 2000s, with a re-badged Suzuki Carry holding the Clipper name today. 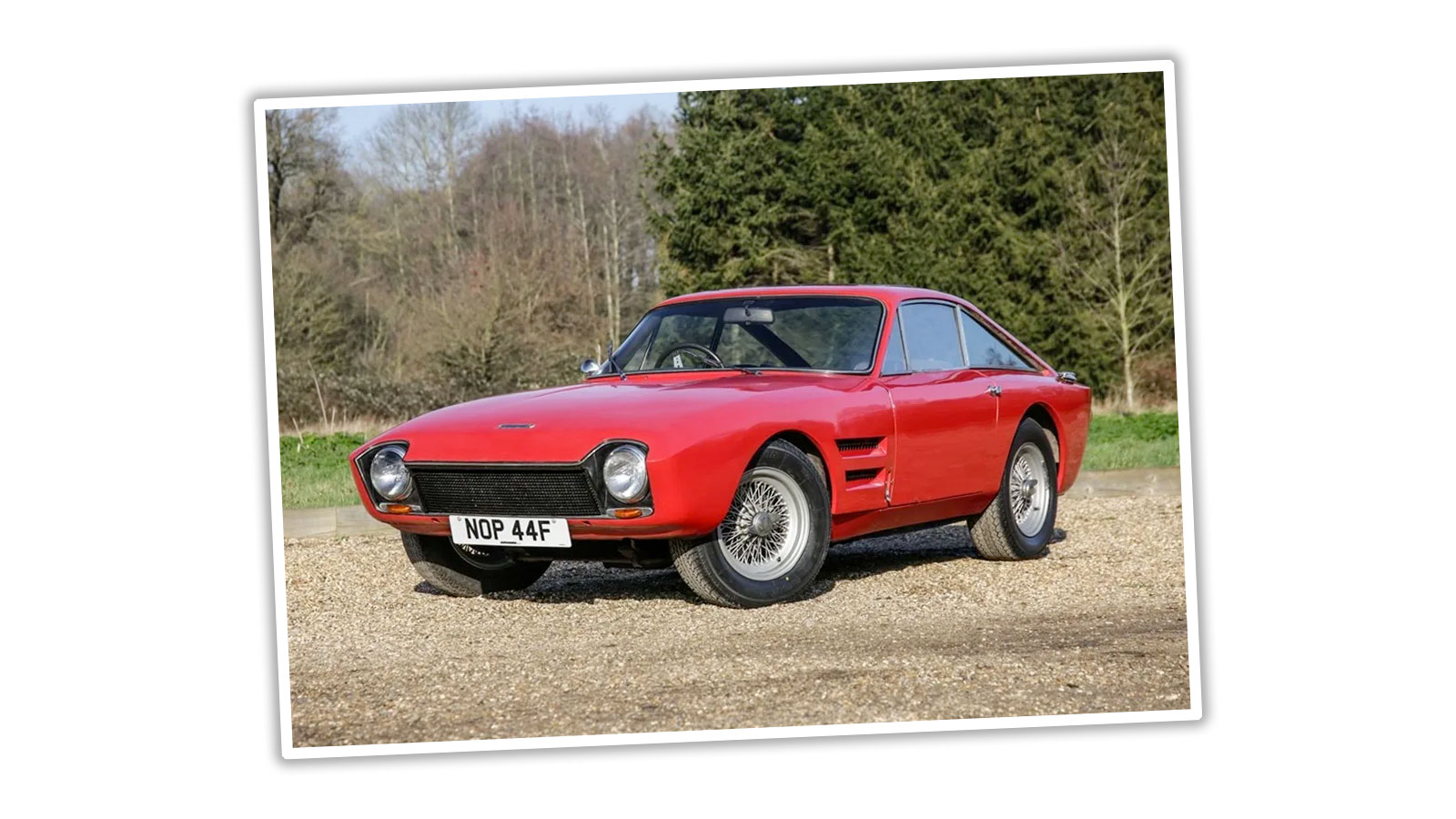 Look how fantastic that car up there looks! Near-perfect ’60s GT car design, if you ask me. That quick-looking little beast started off as a Ford V8-powered TVR project to compete with other coachbuilt GT cars of the era like ones from Aston Martin or Jaguar or a Jensen Interceptor or fast, elegant machines like that.

TVR being TVR, they went broke before they could get the thing to market (though they did build a prototype), but the car was reborn by a new company, Trident, and the car was now made of fiberglass instead of steel, but still with Ford V8 power. Other versions called the Venturer and Tycoon were offered, and the Clipper was switched to a Chrysler 5.6-liter V8 by 1971.

Production numbers for the Clipper seem really, really low, like count on one hand low if you include prototypes, and one finger if you limit to production cars, but, still, it is a Clipper and it did exist, so it counts.

The One I Can’t Find A Picture Of Or Anything: Clipper Steam Automobile 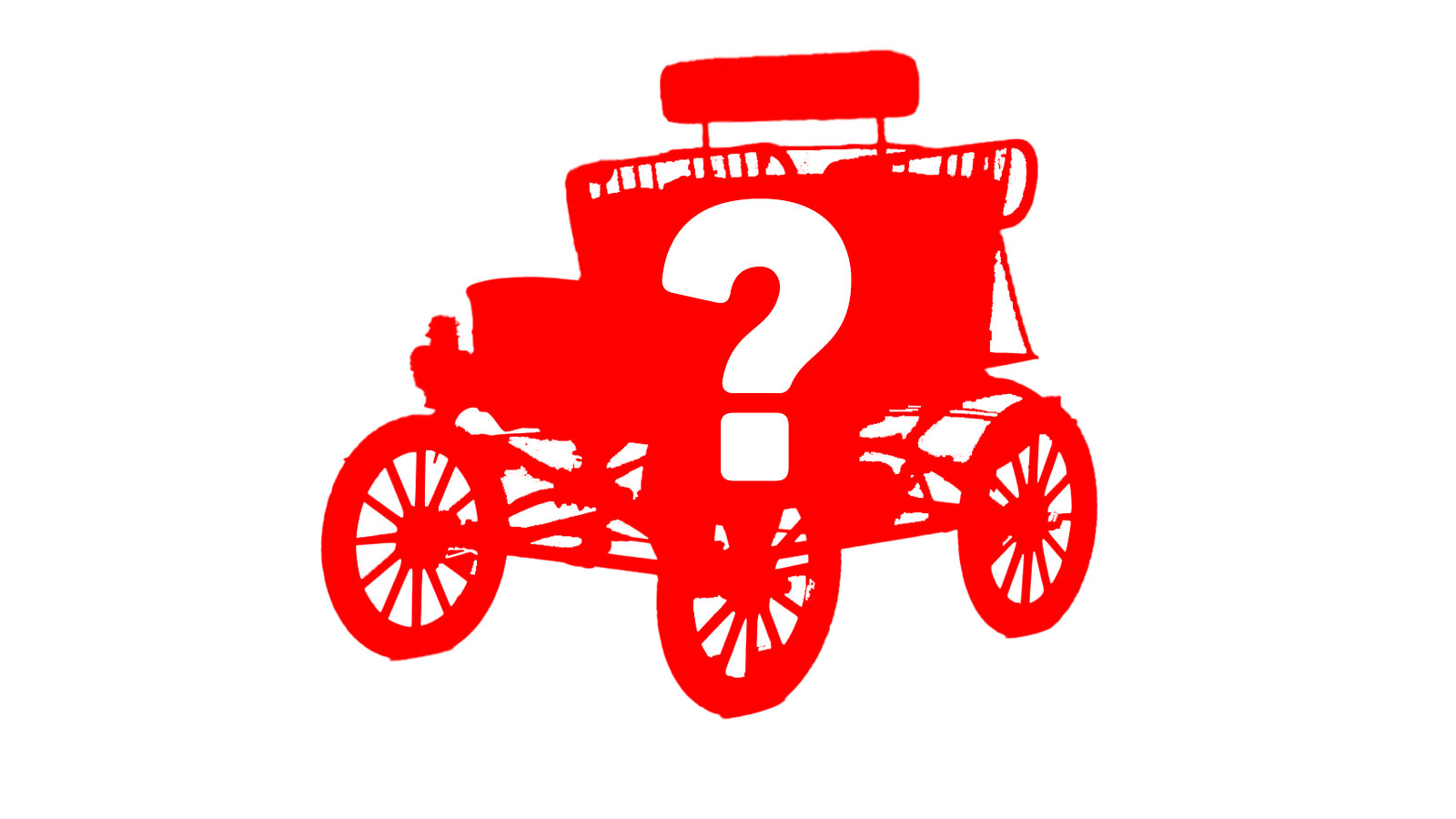 The limited information about this 1902 steam car consists of the name of its developer, Elmer Pratt, and that it was built in Grand Rapids, Michigan. Some sources have suggested its design was based on the Cartercar, a car known for its novel friction-drive system, but I’m a bit skeptical of this because the first Cartercars were built in 1903, and if you’re going to base something on something else, it’s helpful to have the thing your basing it on already existing.

So, I’m not really sure what to make of this earliest Clipper right now.

I guess VW really had a thing for the Clipper name, because “Clipper” became the designation for base trim-level VW Cabriolets in the UK from 1987 to 1993. Maybe this doesn’t exactly count because it’s a trim level as opposed to a unique model name, but still, it’s something, right?

Now, here’s the real question: which of these do you think was named for the majestic sailing ship, and which for the loud thing that makes your hair short?

I'm a co-founder of the Autopian, the site you're on RIGHT NOW! I'm here to talk to you about taillights until you cry and beg me to stop, which I absolutely will not. Sorry. Hug? Also, David's friend.
Read All My Posts »
PrevPreviousThe Last Surviving Example Of The Weirdest Bus Ever Has Been Found, And It Still Runs
NextThree Times Luxury Brands Sold Premium Small Cars Just To Please CanadiansNext