You’ve Probably Seen This Weird, Tiny, WWII-Era VW Pickup Truck Before So Let Me Tell You What It Actually Was 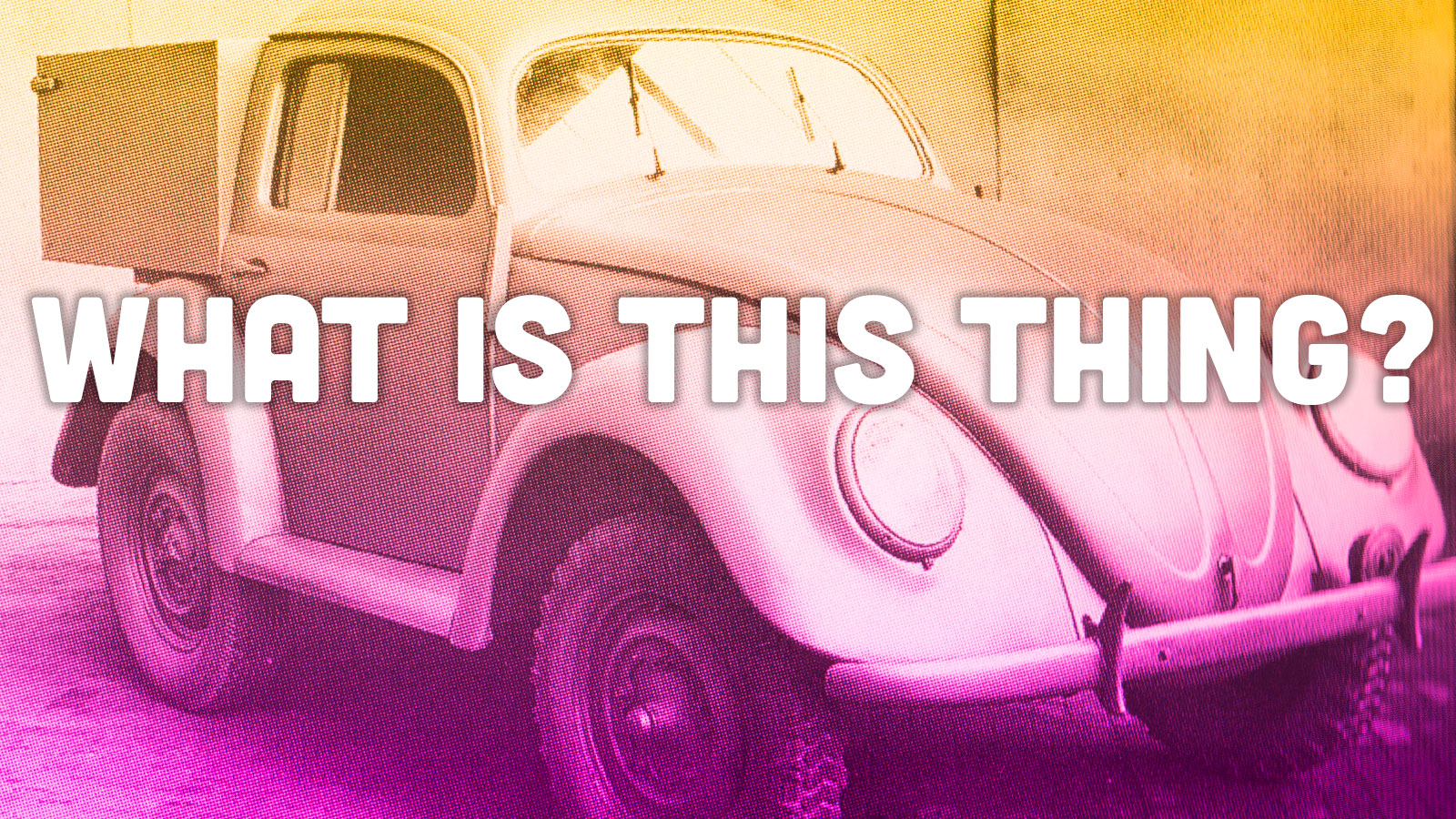 If you’re really into a specific kind of car, and you consume a lot of media about that kind of car, chances are there are certain photos you have seen over and over again, in various books, on websites, in documentaries, clumsily rendered in Sharpie on drywall, and so on. For Volkswagen Beetle obsessives like myself, one of these pictures is the one you see up there: a very strange Beetle variant, a truncated Beetle turned into a strange little pickup truck. I remember this photo catching my attention in a Beetle coffee table book when I was a kid, and always being frustrated that there was so little information about it. The truth is, there’s still not a ton of information, but at least now I know what it is, and, even better, I get to share it with you, so you too can bask in the glow of knowing what the hell this freakish looking Frankenstein’d Beetle micro-pickup truck thing is, and why it exists. You must be very excited.

If you think about it, the first actual Volkswagen is the Type 2 Transporter, the famous VW bus. I know that sounds weird, with the din of over 20 million Type 1 Beetles revving in protest, but think about it: the Beetle was developed before there really was a Volkswagen company, and started life with some pretty miserable, abusive parents, Nazi Germany and the Strength-through-Joy (KdF) organization. It wasn’t until well after the war that Volkswagen AG the company was actually formed, and that company’s first child was the Type 2, conceived and developed as a purely postwar VW-the-company product.

I bring all of this up because the vehicle I’m focused on right now is a VW adapted to commercial hauling use instead of its original intent as a passenger car. The idea of adapting the fundamental KdF/VW platform to hauling objects instead of people wasn’t new. Most VW fetishists know about the Plattenwagens, the crude, factory stuff-movers that were built on Beetle chassis by workers to just help with the work at the factory. These were sort of like reverse pickup trucks with the bed at the front: 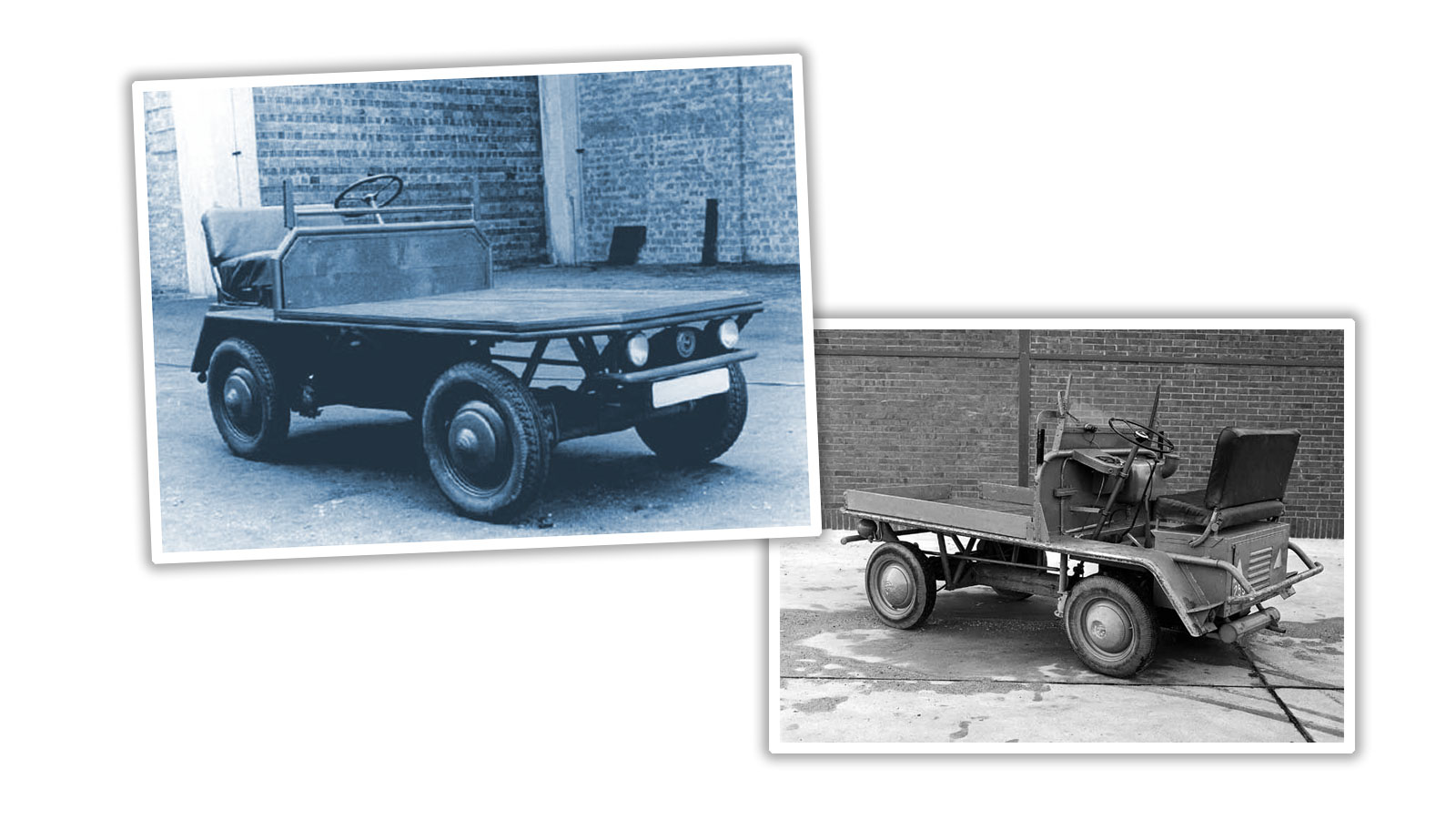 Famously, Ben Pon came to visit the factory on a fateful day in 1947 and got inspired by these crude platforms-on-wheels to quickly sketch what would become the Type 2: 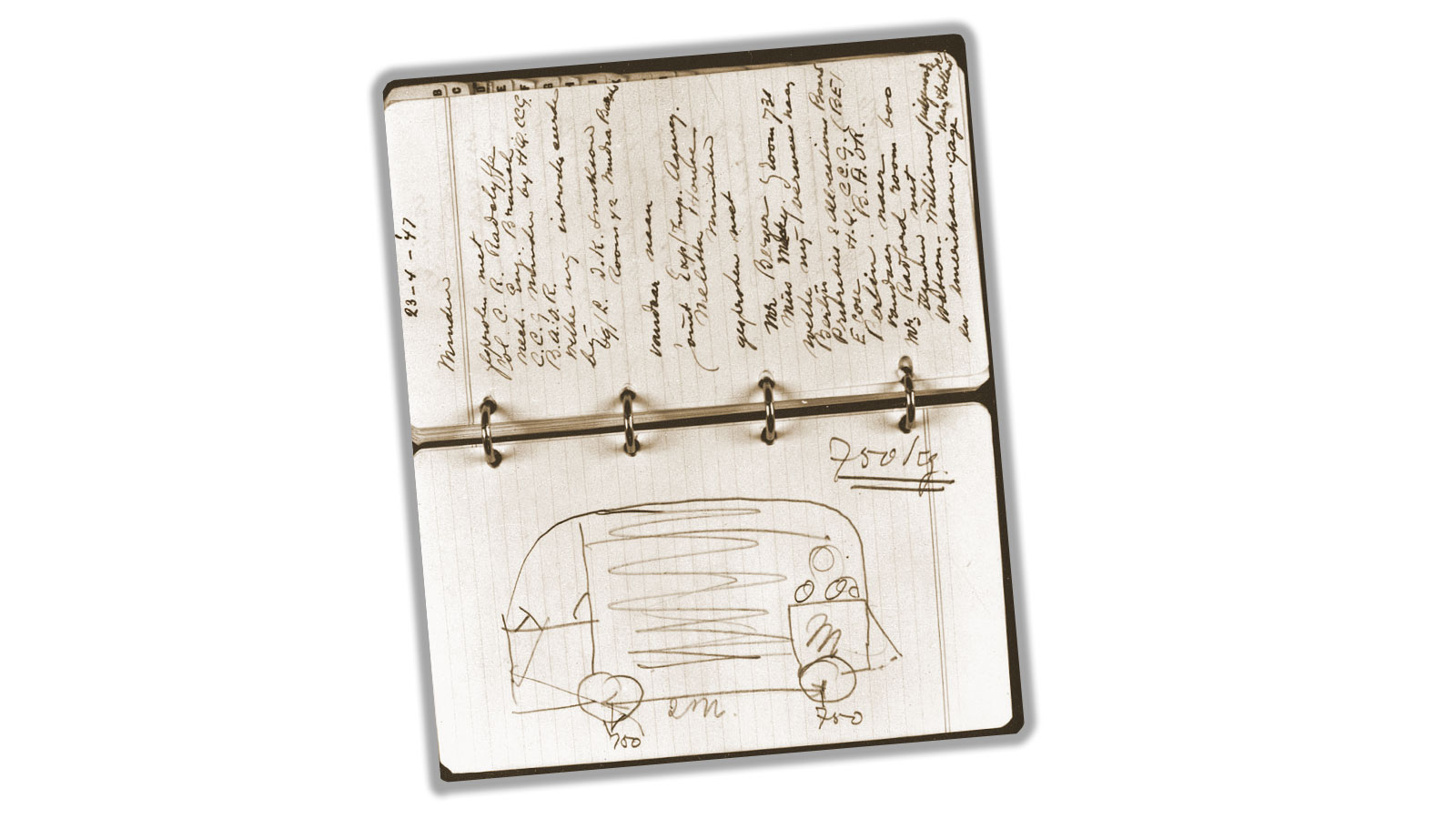 But, even before the bus was born, proto-Volkswagen was already building commercial vehicles based on what they had handy, the KdF/Beetle and Kübelwagens. There were a surprising number of these things built, ranging from Beetle-bodied pickup trucks and box trucks, Kübel-based box trucks, Beetle goosneck trailer-haulers, little vans, variants designed to run on woodgas generators, and so on. 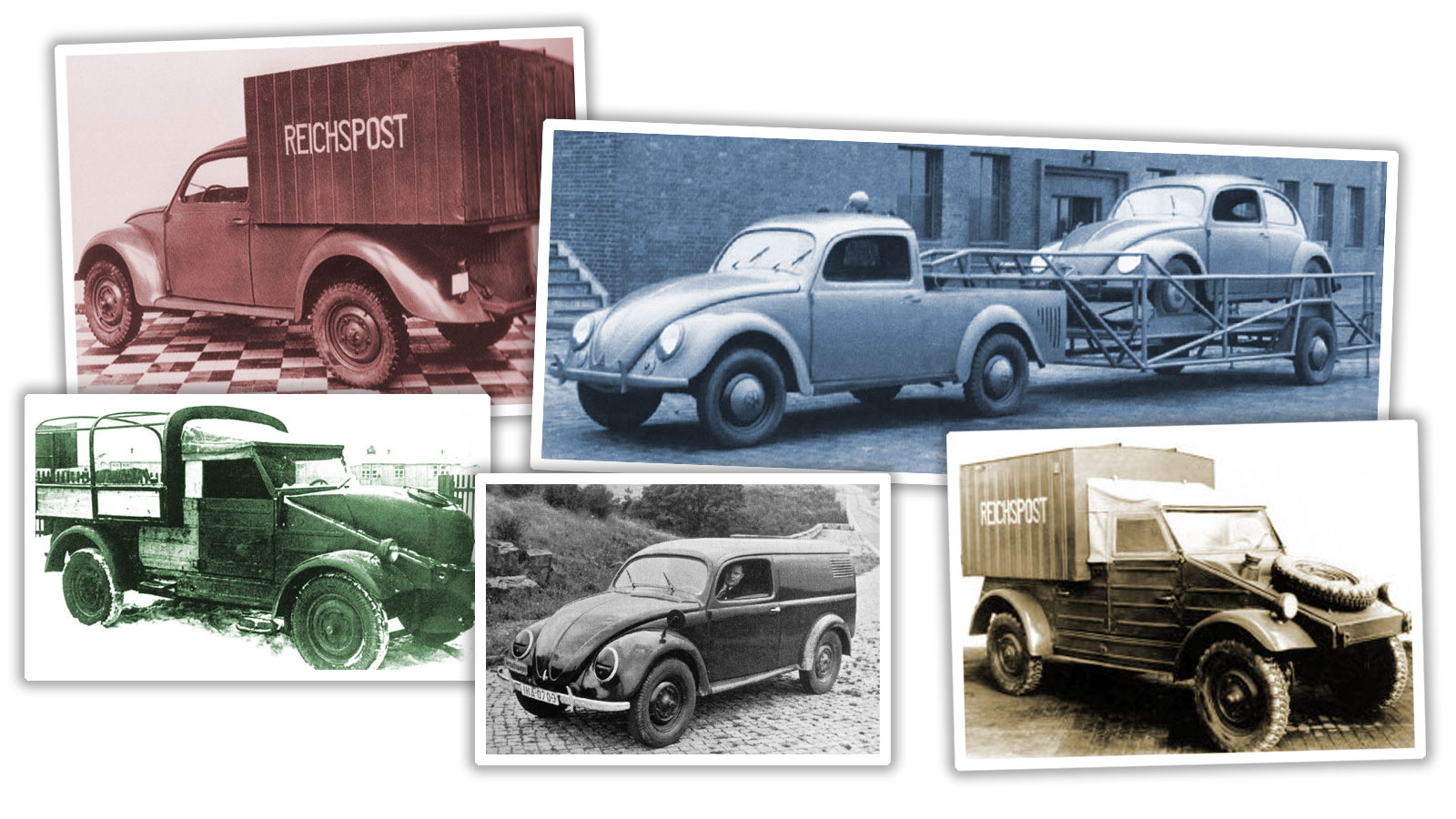 Some of these trucks and vans were built during the war, but a lot were made during the period when the factory was being run by Major Ivan Hirst, the Briton in charge of the Allied Control Commission that was running the Wolfsburg factory after the war, starting in 1945 and continuing until the VW company as we know it today started in 1949. This is the period when the runty weirdo I want to focus on was built: 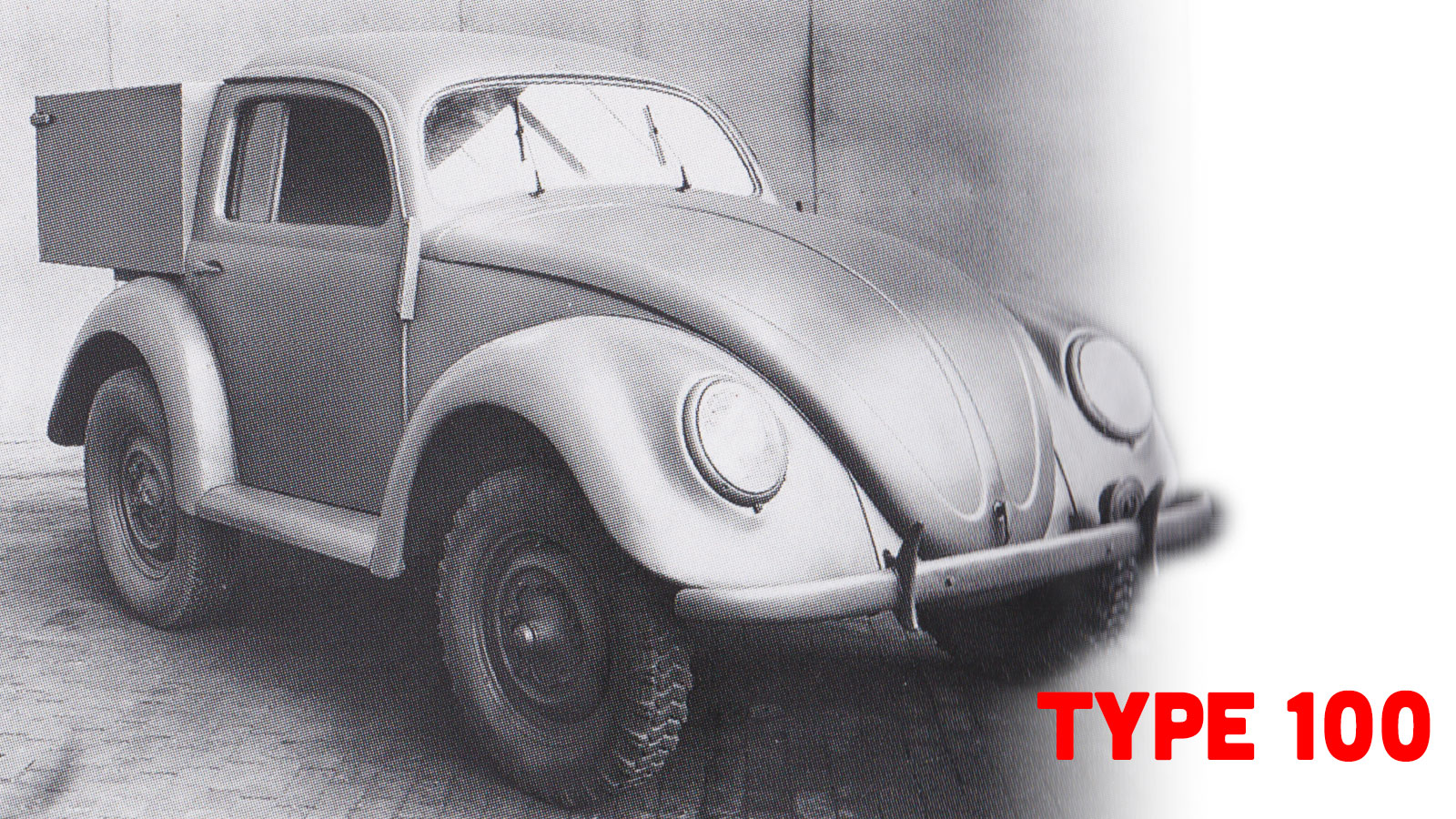 As I mentioned, I think it’s a safe bet that many of people who are reading this willingly (if you’re reading under duress, my apologies, it’ll be over soon) have seen, either in one of the many, many coffee table books about Volkswagen or deep into some internet image search, this strange little truck.

It’s bizarrely stunted and that peculiar mix of adorable and ugly that keeps the pug-breeding industry alive. It’s confusing and fascinating and a genuine puzzle. It’s known as the Type 100, and it’s a truck, of sorts, though it’s also referred to as a tractor, sometimes, or as its called in German, hilariously, a zug-maschinen.

That use of zug-maschinen is usually used to refer to tractor-trailer type trucks, trucks designed to pull unpowered trailers of all sorts—box-type, flatbeds, agricultural equipment, whatever. This use could explain the strange design of the Type 100, sort of, especially if you just try and ignore the fact that it has an actual, albeit tiny, pickup bed, or, maybe more accurately, box, perched there right on top of the engine: 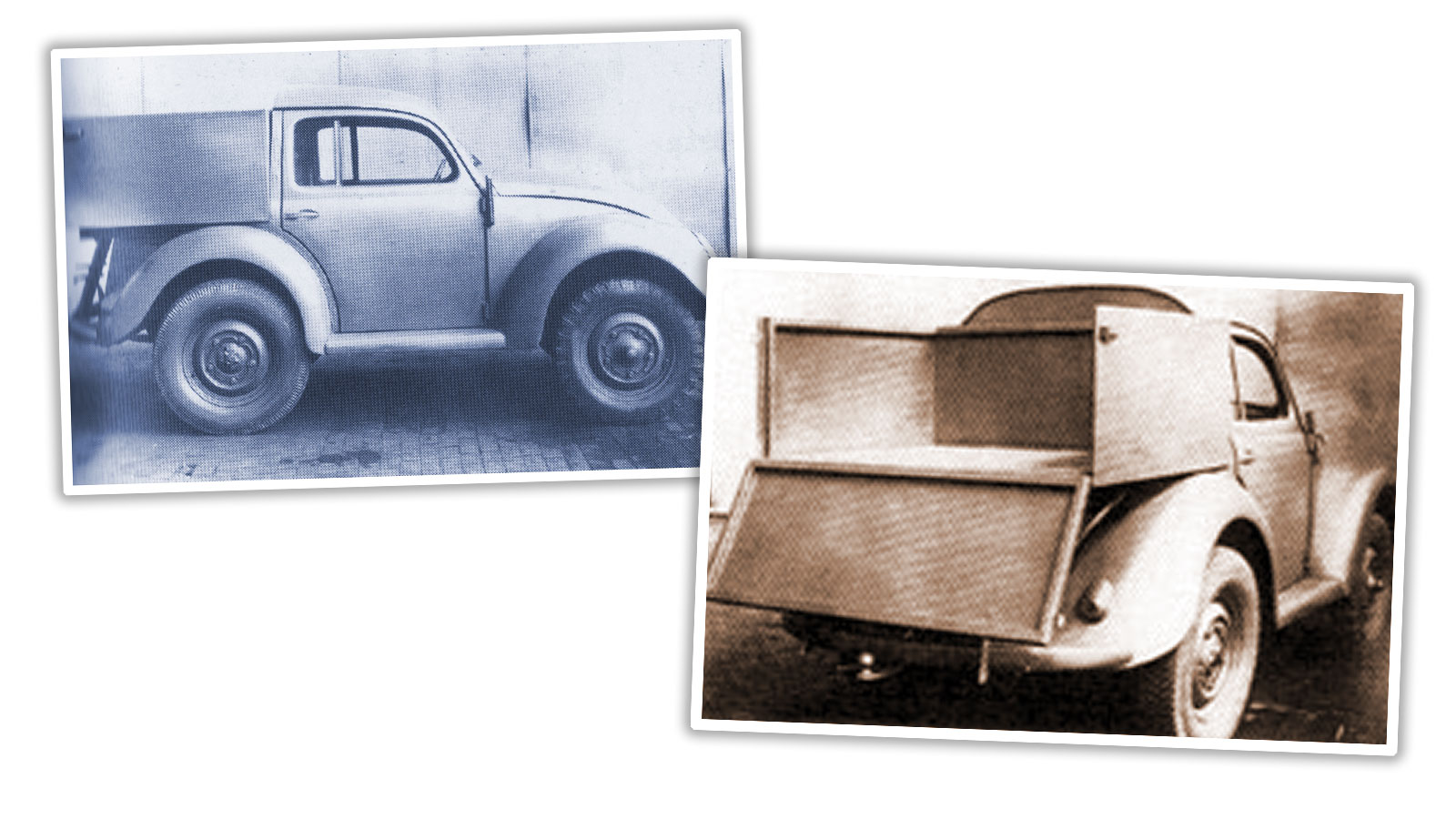 Let’s take a crack at describing the Type 100 as best we can: it’s a KdF/Beetle basic body, at least up to the A-pillars, built on a Kübelwagen chassis. That Chassis is pretty dramatically shortened, in a sort of a premonition of future Myers Manx-style dune buggies, with at least a foot chopped out between the rear fender and the door. The Kübel chassis also means it has reduction gears at the rear, for a bit more ride height and torque, along with that funny butt-raising behavior under acceleration.

It’s shortened enough that the door had to be reworked from the normal Beetle by having an arc cut out to accommodate the rear fender; also, the door window has been modified to be in two sections; a narrow, fixed window to the rear of the door, and the roll-down window glass has been narrowed to fit in the section of the door in front of the fender.

I’ve read some references to the Type 100 that suggest this is a sliding window, but inspection of the few available pictures suggests that no, it’s a narrow roll-down window, mostly because there would be nowhere to slide window glass horizontally. Plus, if they just cut the glass down, the existing window regulator mechanism could be retained.

The Type 100 has the early KdF banana-bumper guard-style bumper, with the exposed single horn, along with Kübel-style semaphore indicators mounted just ahead of the A-pillar, since their usual spot in the B-pillar is absent here. The rear of the trucklet, below the box of the bed and housing the engine, appears to be the same sort of half-cylindrical, vented body panel used on the Type 83 KdF-style box trucks/vans, of which around 275 were built in late 1945: 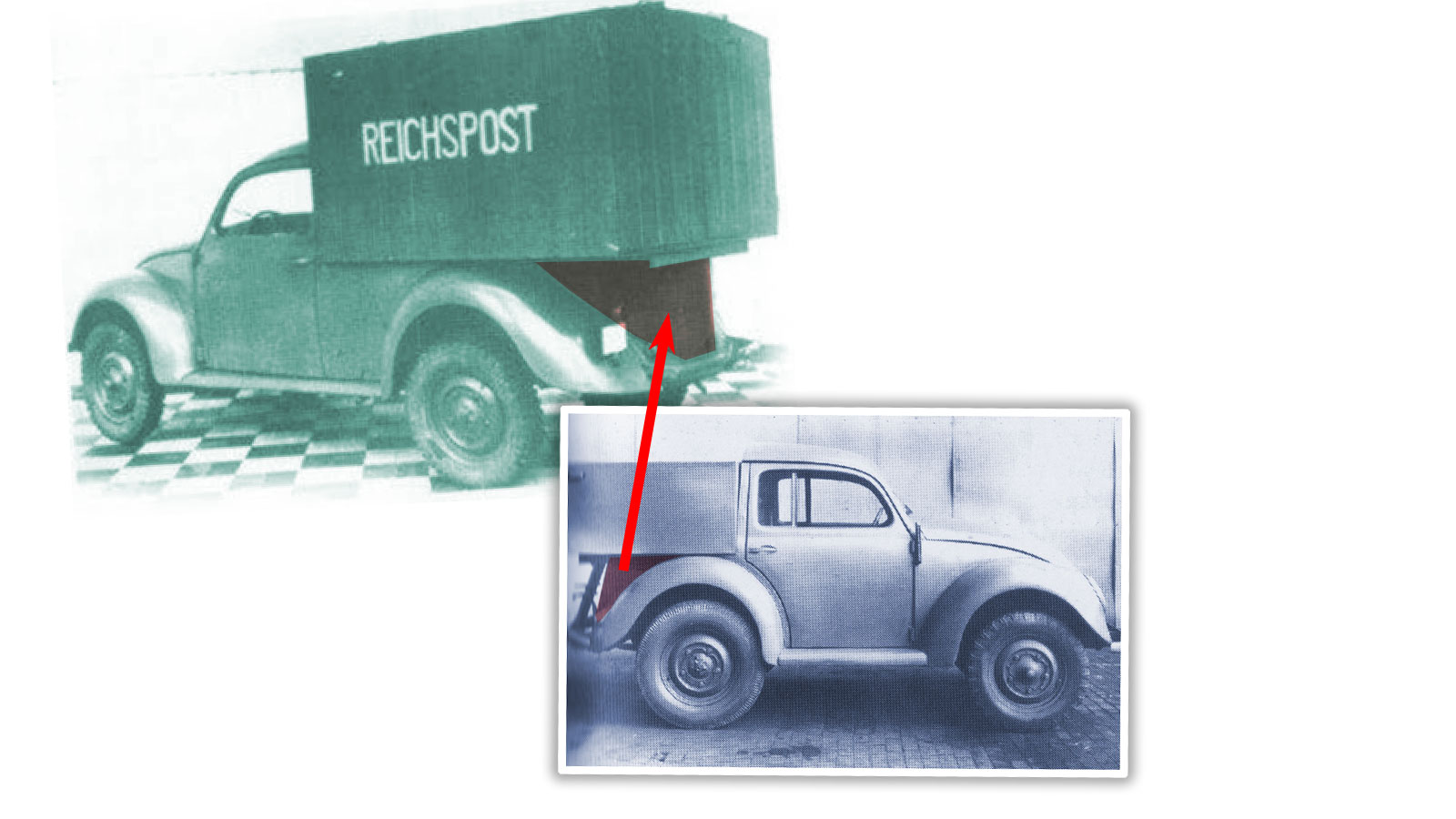 There were also about 219 similar trucks built using Kübelwagen bodies, called the Type 28, but the presses for Kübel bodies were at another factory, Ami-Budd, so once the British ran out of Kübel body parts, they moved to making Beetle bodies for all their unholy truck experimentation.

This type of Beetle-with-a-box-on-its-back truck is the closest thing to the oddball Type 100, as it’s a similar sort of Beetle-body-on-a-Kübel-chassis truck, with the body being cut behind the doors to accommodate a corrugated box cargo compartment, with the engine housed below it, as you can see up there on that Reichpost van. The Type 83 (and the pickup truck variants, the Types 81 and 88) were built on full-length chassis, and as a result had much longer, more useful load areas.

These trucks are easy to understand; they were pressed into service at the factory itself, and also sent out into the world to deliver mail or act as ambulances. They were just the quickest trucks that the factory could improvise, and they worked as the first commercial vehicles built by Wolfsburg after the war, in that strange limbo period of British control of the factory.

In many ways, these odd centaurs were the Type 2’s real ancestors, or at least proofs-of-concept that showed the basic VW mechanicals, at least, were capable of commercial use.

The inherently limited design restrictions of the trucks—adapting a rear-engine design to a pickup truck or van isn’t easy unless you’re considering how to do it from the very start—also likely demonstrated where the problems were, which made Ben Pons’ eventual box-like sketch a much more attractive alternative.

But let’s get back to our weird Type 100 friend. I’ve not been able to find out how many of these zuggers were built, though I suspect it can’t be more than a handful. Pictures show a prominent tow ball at the rear, suggesting that these were, in fact, used to pull trailers, maybe around the tight confines of the factory, airport-tug style?

That would sort of explain the shrunken proportions. A little trailer hauler that also had a decent amount of load space for tools or whatever would likely have been a useful tool in a factory, which could be what these were. Reports also suggest both the British and French militaries used them as tractors/tugs as well, though to be honest I haven’t found much clarification as to if these were used only as tractors in the truck-hauling-a-trailer sense, or if they may have been used in an agricultural context as well. I mean, this thing could have pulled ploughs and other farm equipment, right?

The Type 100 was sort of part plattenwagen ancestor, part nimble runabout that could be parked in the tiniest of nooks, or maybe even shoved onto a freight elevator. I’m not sure anyone is exactly certain anymore, but I’m just happy that this funny little Anglo-Teutonic gnome of a truck existed, a peculiar little footnote that has quietly delighted me for years.

I don’t think any actual ones have survived, but there’s at least one replica bouncing around out there. If you ever find a VW pan cut down for a Meyers Manx dune buggy project, but at the last minute decided a dune buggy really isn’t for you, then perhaps you should consider a replica Type 100 of your own. Because sometimes a little confusion is fun!

I'm a co-founder of the Autopian, the site you're on RIGHT NOW! I'm here to talk to you about taillights until you cry and beg me to stop, which I absolutely will not. Sorry. Hug? Also, David's friend.
Read All My Posts »
PrevPreviousThe 2022 Acura NSX Type S Is A 600 HP Sendoff To A Car That Makes Dreams Come True
NextBushings Can Make A Huge Difference In How Your Car Drives: What You Need To KnowNext