Psst, hey, come here. You want a crappy old car that needs a ton of work? Well, look no further; we have just the thing! Two, in fact. Your choice! It’s day two of project car week, and we’re going to look at a pair of roadsters that you might possibly, if you really put your mind to it, have ready to drive by next summer. Or the summer after.

But first let’s see who you picked as victor in our Beetle battle:

This one was close, but it appears that the blue Beetle is our winner. It’s hard to deny the appeal of a running engine in a project car; even if you end up having to tear it apart later, at least you know it was once something besides an inert hunk of metal. I guess that means the orange Bug is still “Holding Out For A Hero,” which is too bad, because to me, that patina with the classic ’70s stripes is “Almost Paradise.”

There’s a car you might have heard of called the Miata. It’s kind of obscure, but it’s been around for a few years now, so there’s a possibility you have stumbled across one. Or two. Thousand. Well, you may not realize it, but the Miata is actually an homage to a whole class of small convertible sports cars sold decades earlier. These little British and Italian wonders were fragile, finicky, rust-prone nightmares that just happened to be an absolute blast to drive during those five days a year when everything was running right.

For a long time, these little headaches-on-wheels languished on the wrong side of the classic car tracks, but they’re starting to gain some respect. But there are still plenty of cheap basket-cases and barn-finds to be had, and we’re going to take a look at a couple now. 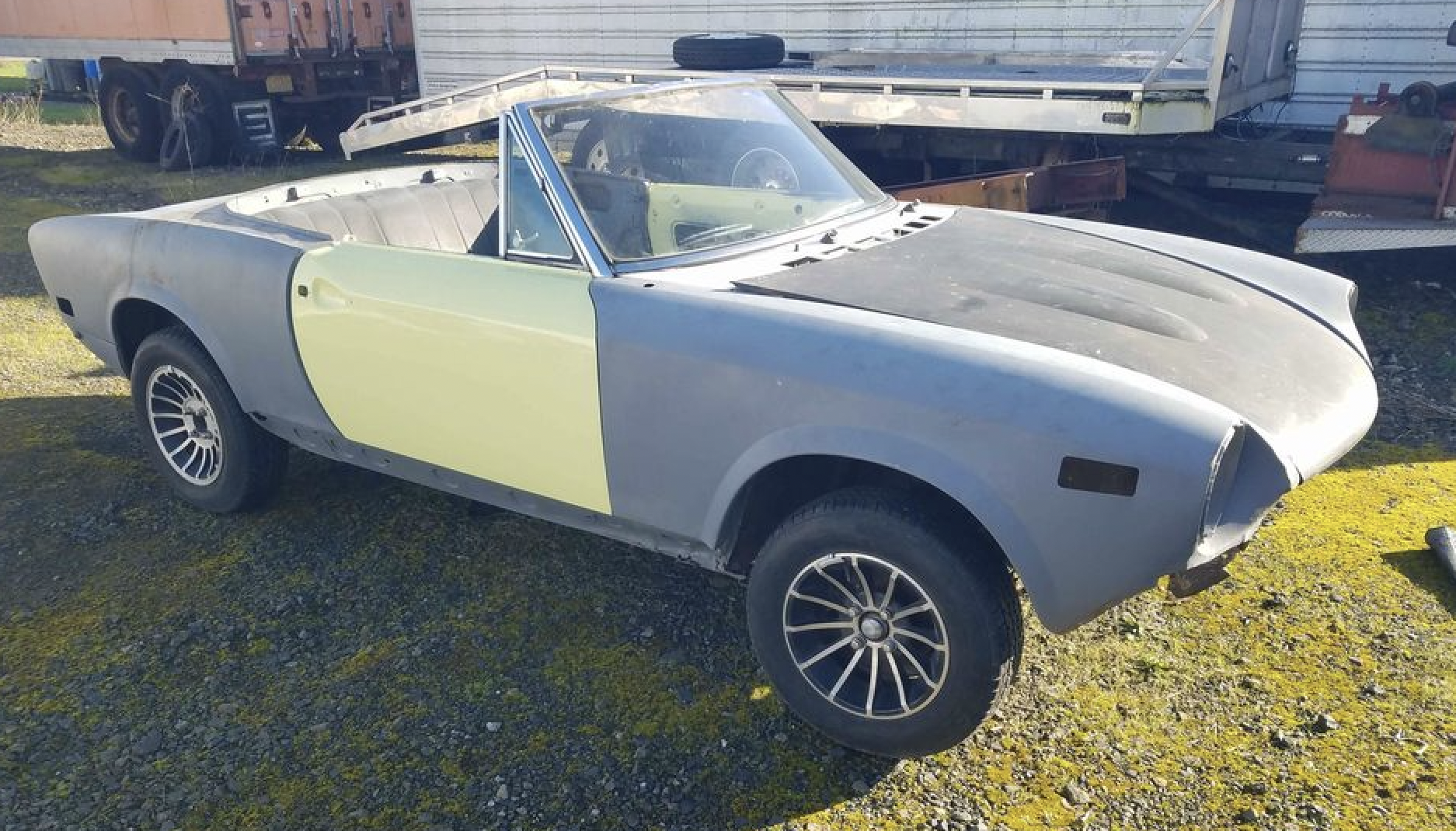 Odometer reading: 80,000 miles claimed, but you’d have to find it in one of those boxes to check

You know you’re in for a rough ride when the first two words of an ad listing are “Failed project.” Somebody disassembled this poor little Fiat, realized they were in over their head, and just boxed it up. You’d have to carefully go through all those boxes to see if anything is missing, but it looks like all the important bits are there: complete rolling chassis, engine (with a spare longblock), gearbox, trim, interior pieces, top – it’s like a giant model kit. I don’t know about you all, but I love a good model kit. 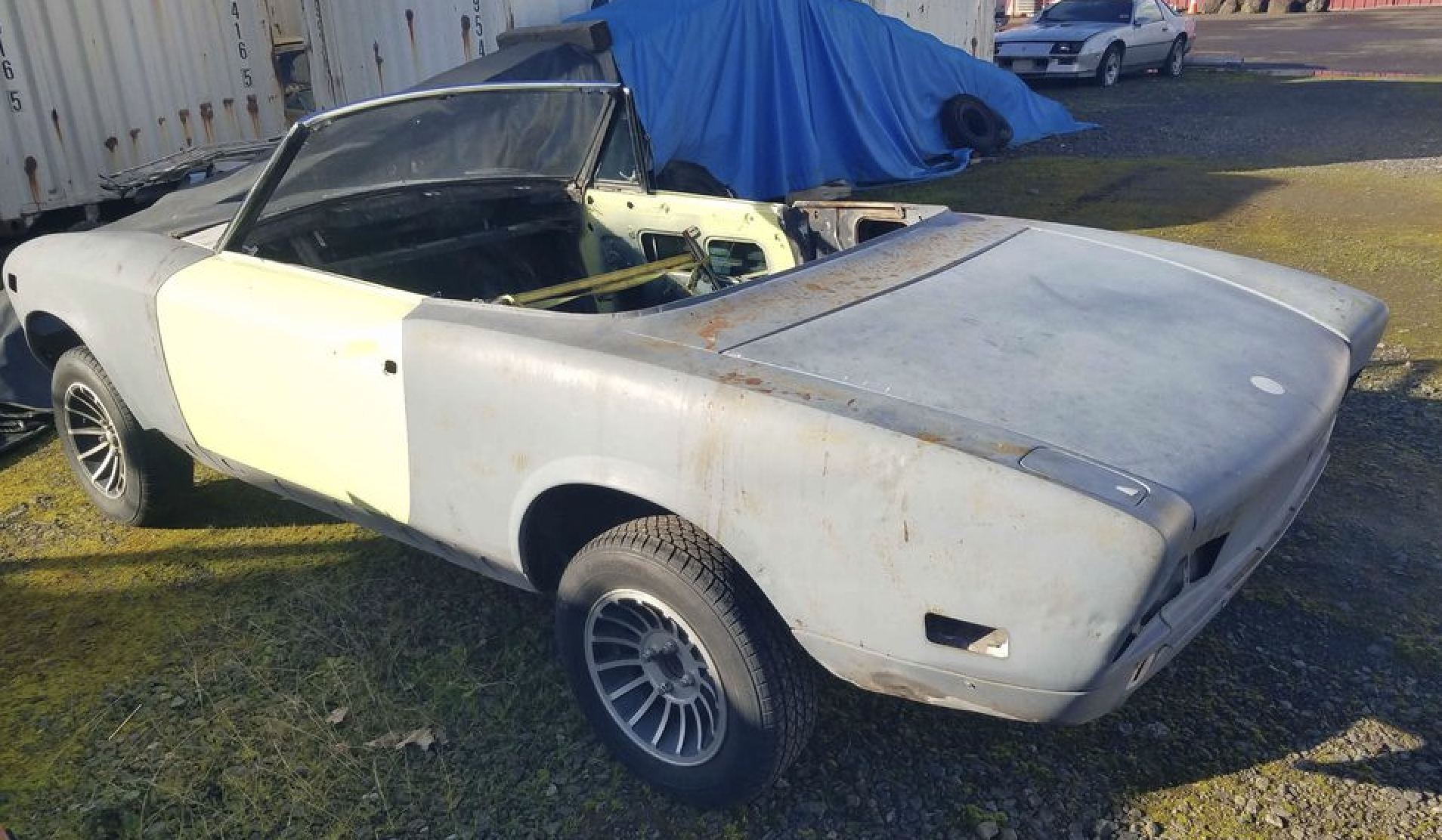 Once you’ve finished repainting and reassembling it, you’d have a fun little car steeped in Italian sports car history. The 124 Spider was penned at legendary design house Pininfarina, who is responsible for about half of all the drop-dead gorgeous cars you can think of. Its twin-cam engine was designed by the same guy who designed racing engines for Ferrari, the fabulously-named Aurelio Lampredi. It’s the same basic engine that gave Fiat and Lancia a string of rally titles, including the Group B manufacturer’s title in 1983. Look up on the Mount Olympus of engines, and you’ll see the Fiat twin-cam sitting there in its rightful place among the greats. 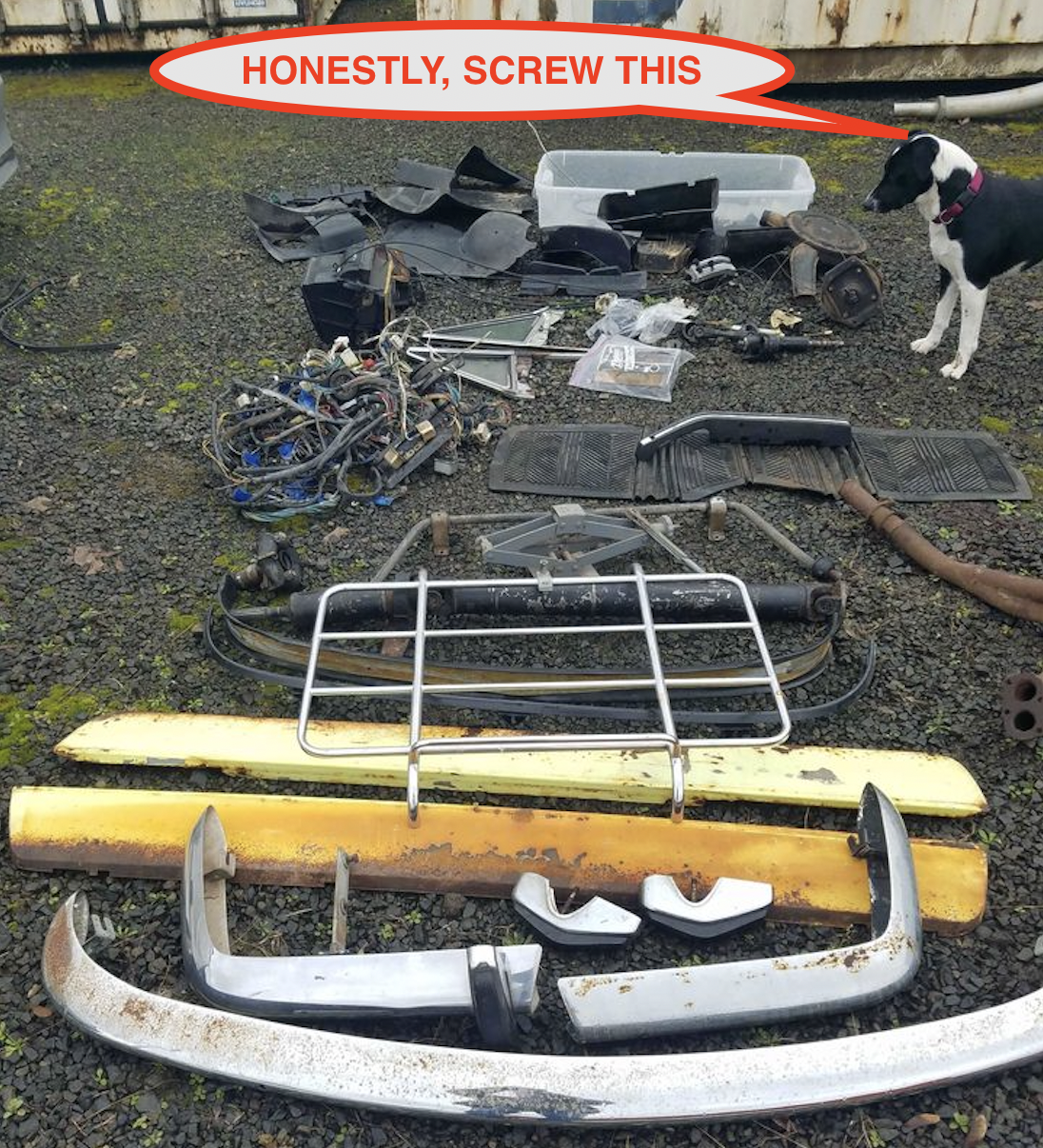 You’ll want to have the head checked out by someone who knows these cars before bolting the engine back together. This is an early belt-driven-cam engine, and belt replacement was a strictly-enforced 30,000 miles. Plenty of owners ignored that service interval, and paid the price of bent valves; Lampredi’s little wonder is an interference engine. 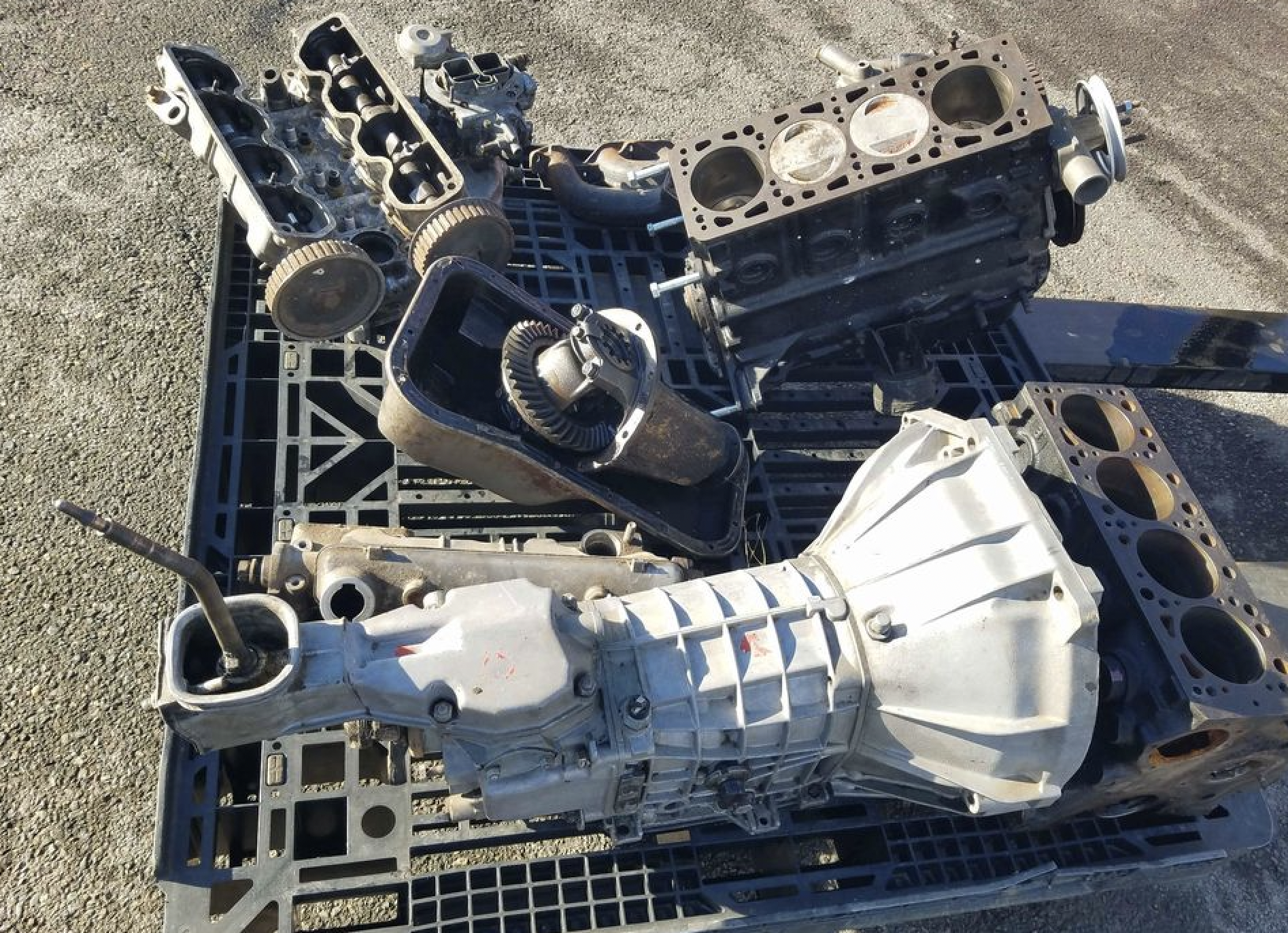 This 1972 124 Sport Spider is a good vintage, before smog controls started sucking the fun out of sports cars. And in its current disassembled state, you can pretty much make it your own. Paint it whatever color you like, give that famous motor a pair of Weber carbs to breathe through and run it up through the gears on a nice summer day, just soaking up the sunshine.

I mean, in a couple of years, once you get it all back together. But you gotta start somewhere, right? 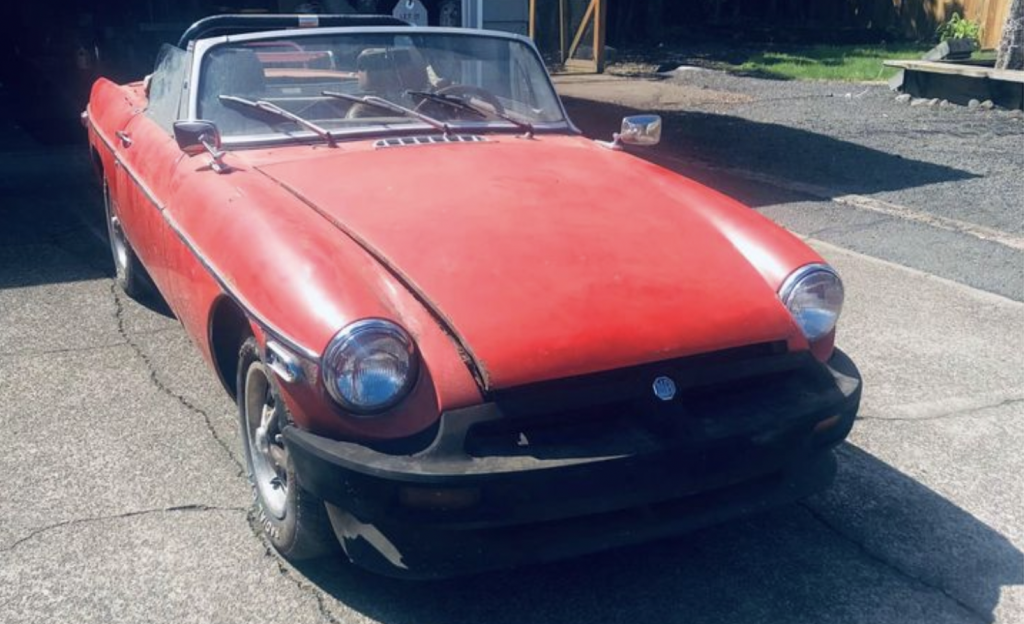 The MGB, especially the late rubber-bumper one, is the Rodney Dangerfield of the classic car world – it gets no respect [Editor’s note: Just wanted to chime in here to brag that I actually get this reference, for once. It’s comedian Rodney Dangerfield’s go-to line in his standup routine. -DT]. Part of it is probably just that they’re common; MG produced the B for eighteen years, making over half a million of them. They’ve never been expensive, so they tended to get abused and neglected. Combine that with a primitive gremlin-prone electrical system and not especially good performance even when they are running right, and the natural habitat for a late MGB becomes that muddy patch of gravel next to the garage. 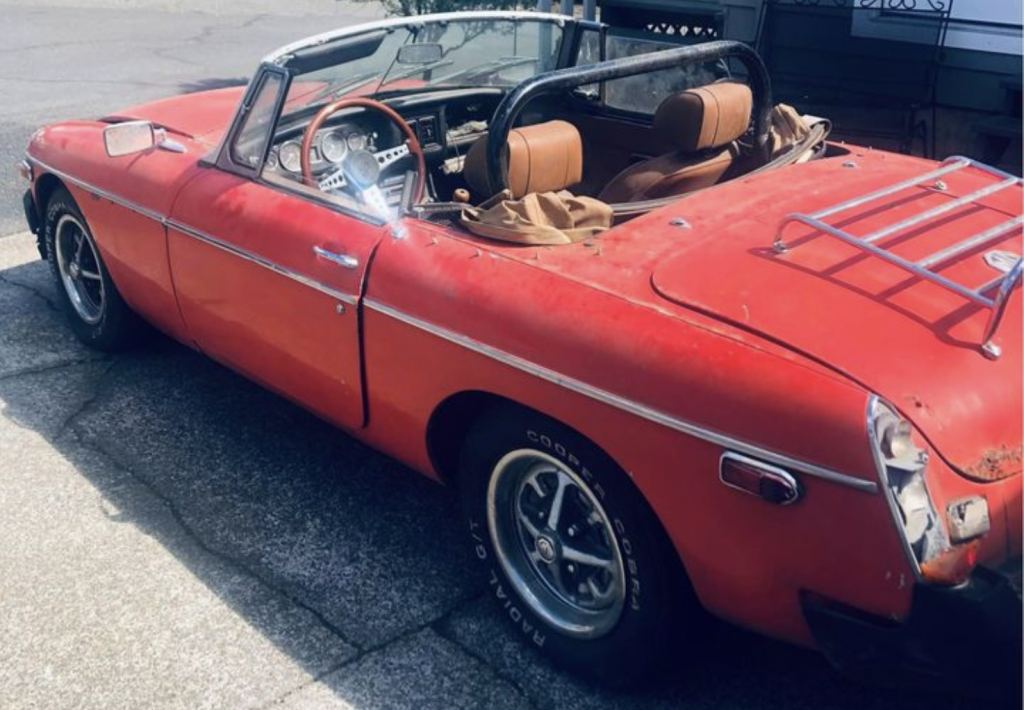 Which is a shame, because like the Fiat, this car has pedigree. MG started racing in 1924 and didn’t stop until British Leyland imploded in 1986. Stirling Moss set a land speed record in one in 1957. Carroll Shelby’s first race car was a 1949 MG TC. My dad wooed my mom in a 1961 MGA. There’s a lot of important history behind that octagon. 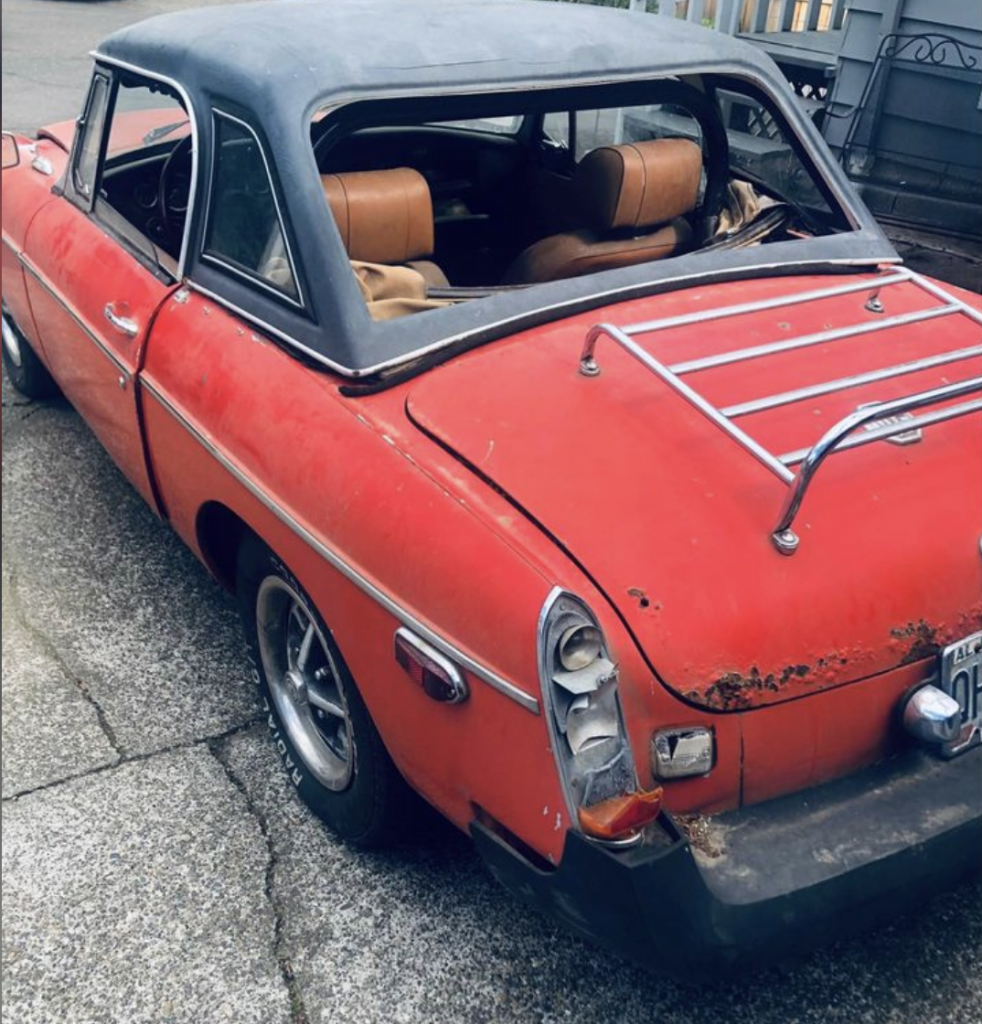 But as we’re all painfully aware, the 1970s did terrible things to cars, and the MGB was no exception. It lost its sleek chrome bumpers, first saddled with enormous rubber overriders, then replaced entirely by a massive black rubber nose, sort of the automotive equivalent of Groucho glasses. The ride height was raised an inch to meet new US headlight height requirements, upsetting its chassis balance. And smog controls choked the 1.8 liter B-series engine from a respectable 95 horsepower down to 63. All those indignities are reversible now, of course, but it does cost money. 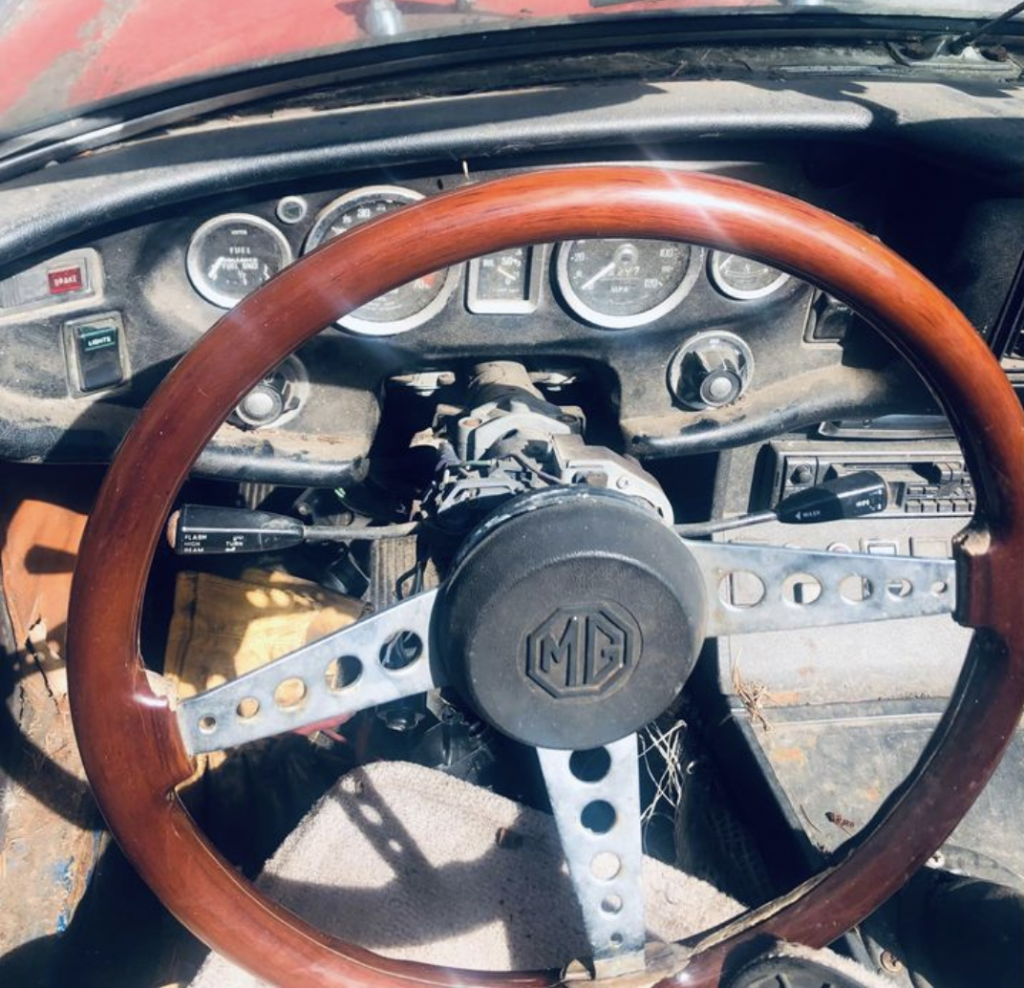 But as starting points go, this little red B doesn’t look too bad. If it starts, then at least that miserable little paperweight of a Zenith-Stromberg carb is doing its job. I’d suspect that the fuel delivery problem is down to the SU fuel pump, which is electric, uses points that can burn out [Editor’s note: Yes, literally points in the fuel pump. I’d never heard of it myself, but I can say that of all cars to have an electrical technology I’ve never heard of, I’d rather it not be a British one. Fuel pump points in an MG sound like a nightmare. -DT]. It isn’t too rusty, what you can see of the interior looks all right (and I covet that aftermarket wood steering wheel), and everything else is available from Moss Motors and other vendors. And if you don’t want that aftermarket hard top, you could probably sell it to recoup some expense, even without the back window.

So there we have it – two flavors of do-it-yourself roadster fun, either pasta primavera or a good hearty bangers and mash. What’ll you have?