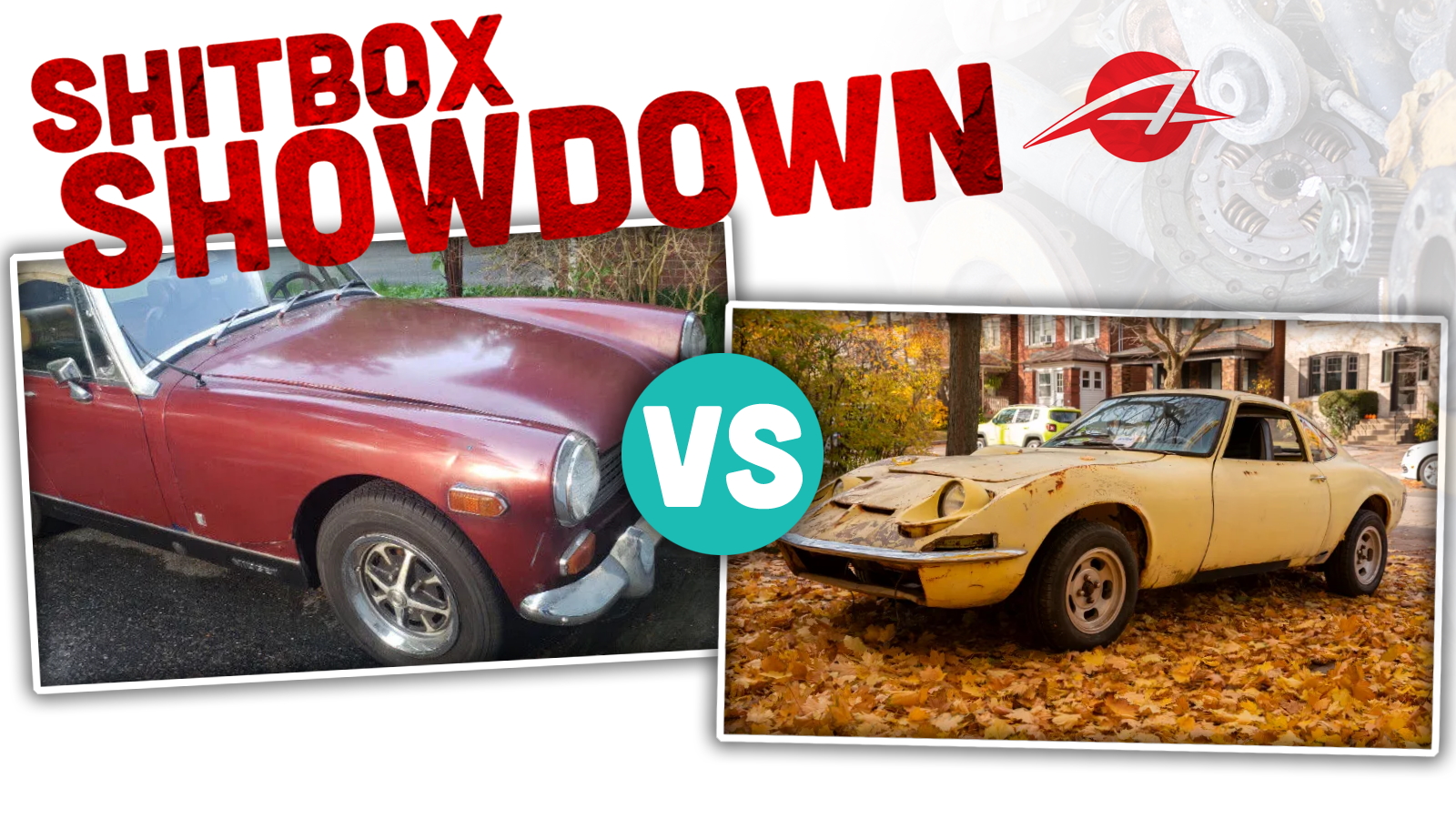 Welcome back to Shitbox Showdown, where we pit two cars against each other to see which one seems less nightmarish. Today’s cars are cheap, fun, and rusty, which seems about right given my automotive history. Before we jump into things, lets take a look at how yesterday’s battle played out. 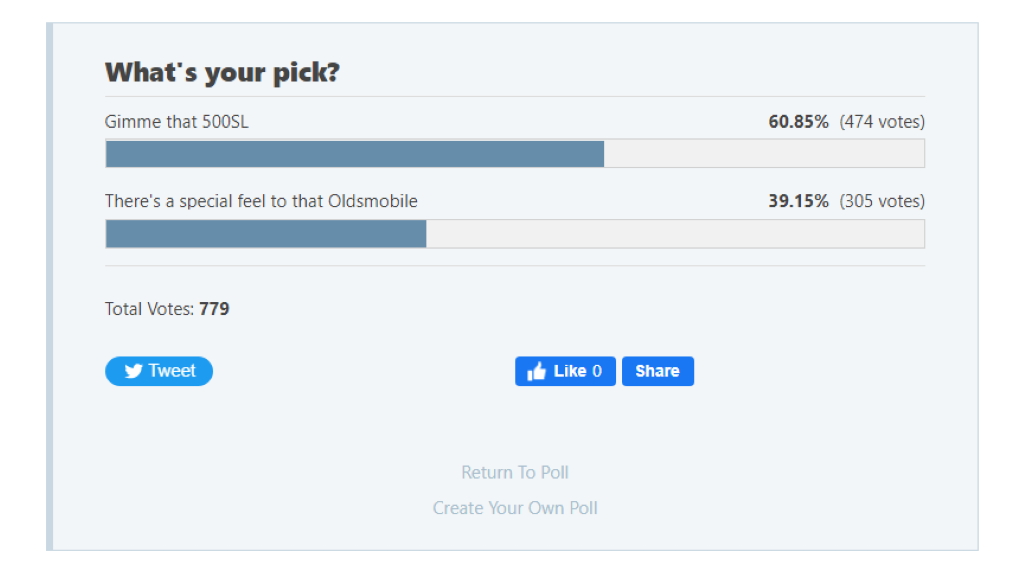 Despite the absolute terror of old German car problems, it looks like the 500SL took the win over the Oldsmobile. In fairness, I’d also choose the 500SL, simply because I love that old Mercedes build quality and this cabriolet seems ripe for a six-speed swap.

From flagships to dinghies, let’s switch gears and look at two cars barely bigger than those ginormous FILA dino-stompers you see Instagram influencers wearing. Of course I’m talking about tiny little sports cars from many, many decades ago. While relatively fast and loose safety standards allowed these cars to exist, an equally fast and loose approach to corrosion resistance means that not many examples exist today. Let’s look at some terrible examples for not much cash. 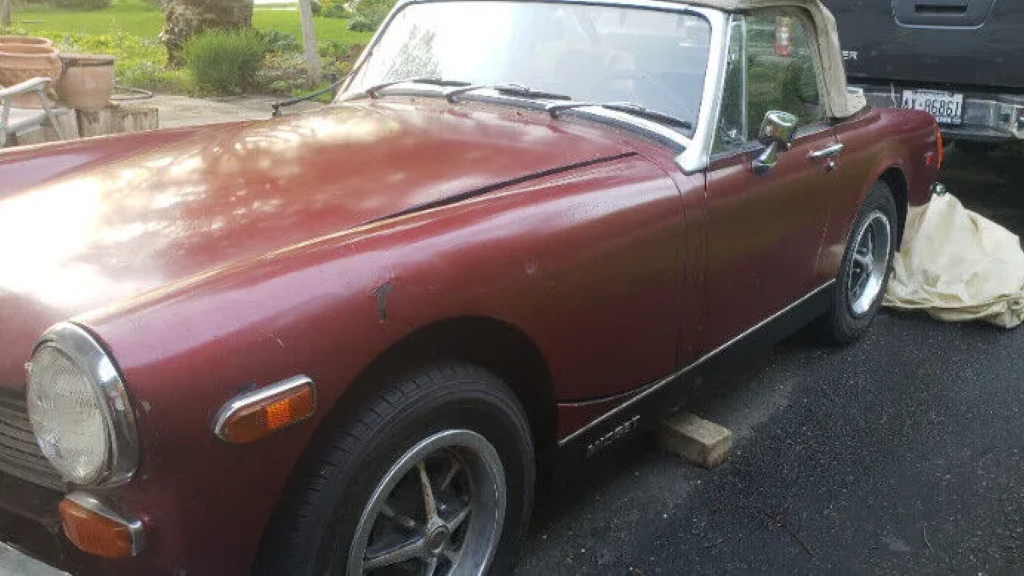 If we’re talking about cars the size of shoes, how could we not include an MG Midget? While the model name hasn’t exactly aged well, this pint-sized British sports car is from a time when your knees were crumple zones and roadsters were affordable. Sure, it wasn’t the quickest toy in British Leyland’s arsenal, but it’s an endearing little thing that sparks heaps of joy. 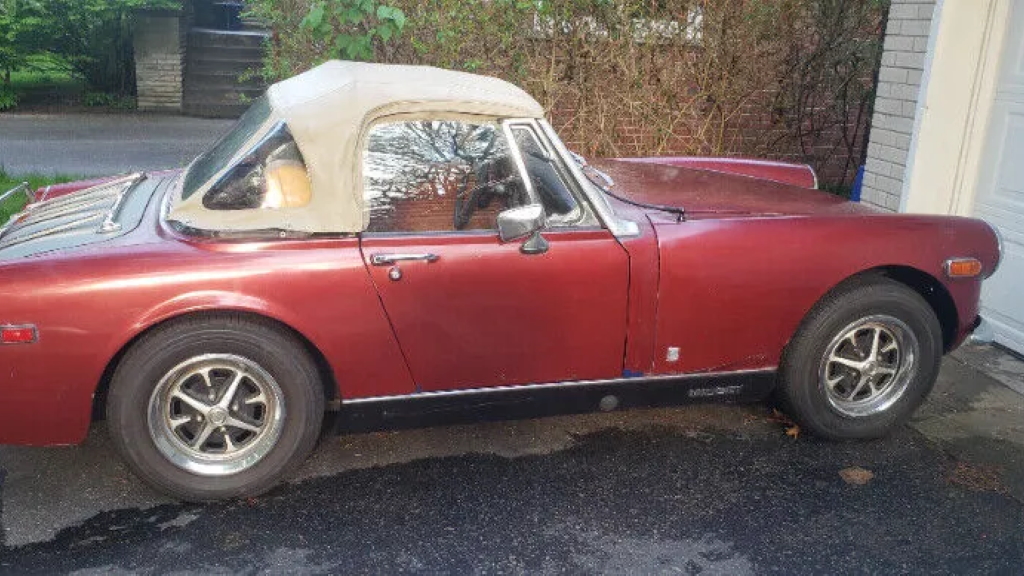 Unfortunately, time hasn’t been kind to this non-PC MG as the body looks new parent levels of tired. A gash on the left front fender shows clear evidence that James Bondo had his hands on this thing at some point in the past, while the paint appears to show more orange peel than a Tropicana factory. It’s also quite obvious that this car used to be blue, so the change to red seems a bit unfortunate. By far the biggest issue is the requirement of “transmission work,” which is usually classified ad lingo for “chuck the gearbox in the bin and find another.” 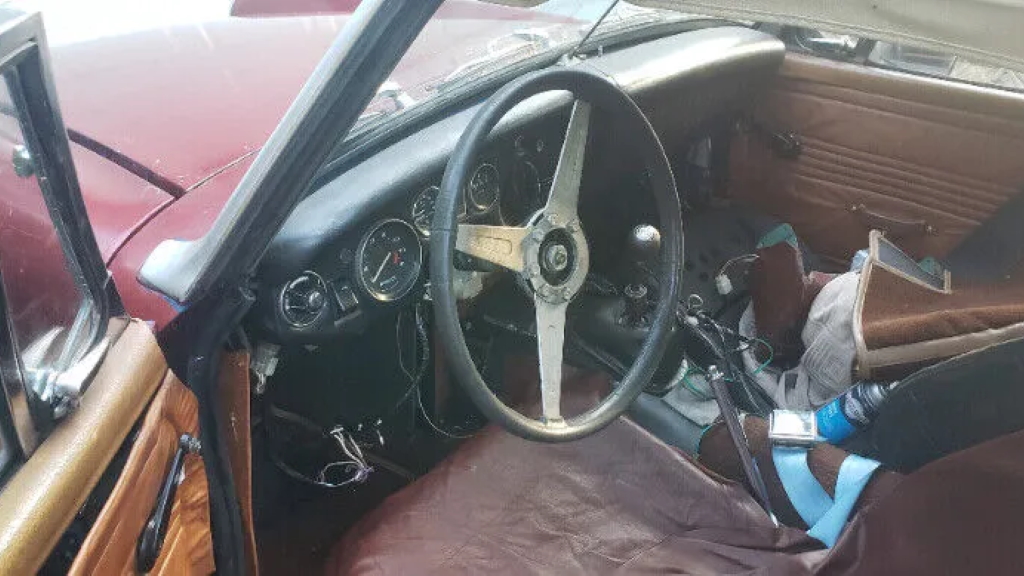 However, there is some good news. The chromework appears to be in good shape, while this thing wears a tasty set of rostyle wheels. Plus, the MG appears to be largely complete, even if its dashboard is cracked six ways from Sunday. If the underside isn’t completely rotten, this could be a fun weekend beater that you could flog up gravel roads without a care in the world for the paintwork. What’s more, parts availability for these things is quite good, so it won’t be too hard to source all the baubles necessary to bring this thing back into banger spec. Forget getting it perfect, get it running and wear that patina with pride. 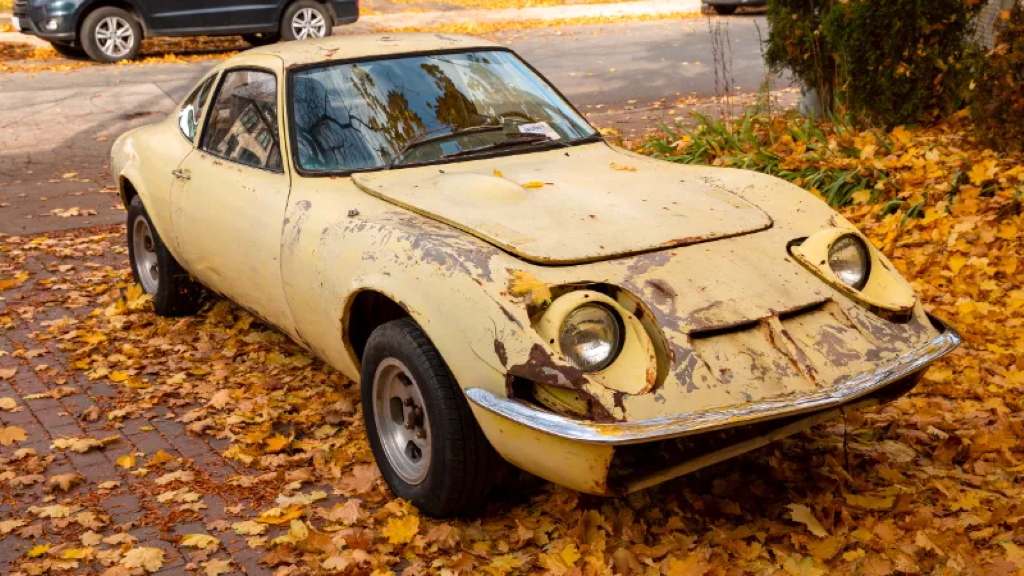 Readers, I have a confession to make: Because the Toronto car world is relatively small, I’ve actually wrenched on this exact shitbox. I was there when it sputtered to life after decades of dormancy, so I’m probably qualified to tell you just how good or bad it is. Any Opel GT is hard to find in North America, so in case you’re not familiar with this baby Corvette, let’s run through the basics. 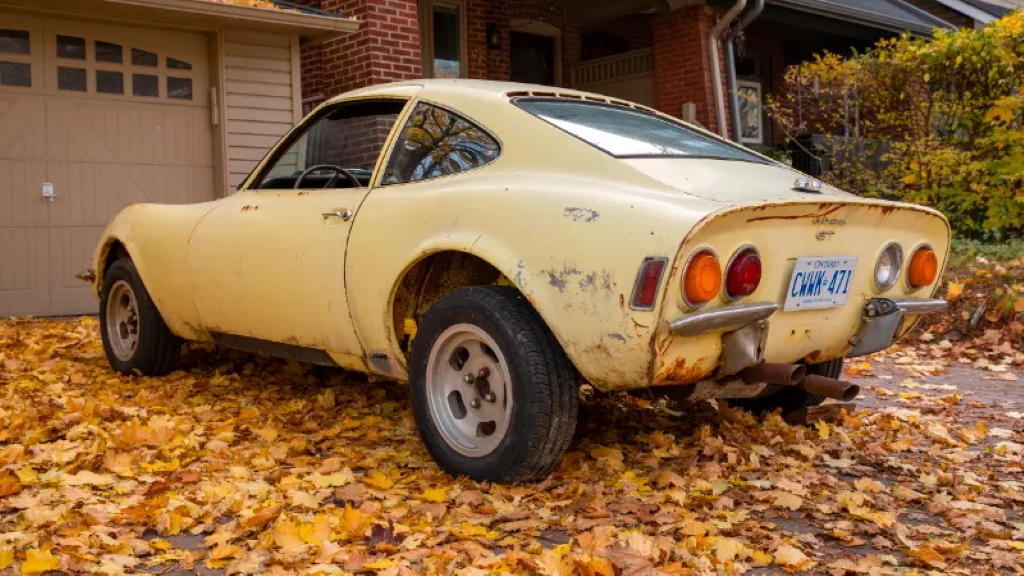 With Kadett bones and coachwork by Brissonneau & Lotz, the Opel GT was a shot at an attainable German sports coupe of the 1960s. It’s roughly the size of a Croc, features some of the coolest pop-up headlights ever fitted to a production car, and likely confounded Buick dealerships once it arrived in America for sale. Much like the Volkswagen Karmann Ghia, the only body seams you’ll find are for moving panels, which makes cosmetic repair quite the challenge.

As for this Opel GT, it looks to have been in a fight rather than be in fighting shape. Getting it on the road will require heaps and heaps of work. The floors and inner sills have been patched quite well, but the trailing arm pockets are crustier than that sock you kept under your bed as a teenager and the front subframe needs a spot of welding. Oh, and everything but the engine and rear axle needs to be installed. No pressure, right? 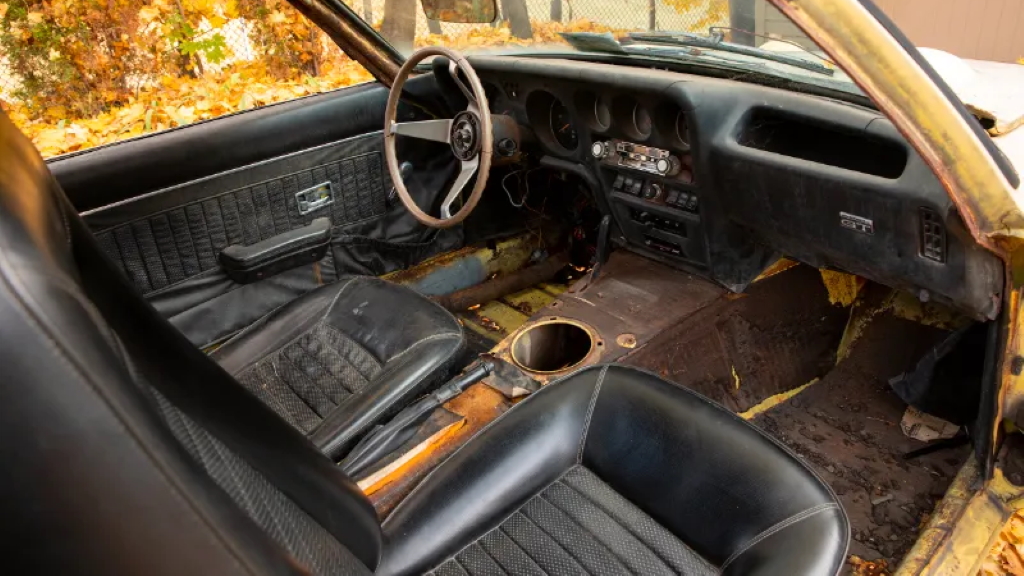 However, the 1.9-liter four-cylinder engine runs like a top off of an external tank, while the interior’s in surprisingly decent shape. What’s more, most of the bits to finish this thing are actually on hand, so it wouldn’t be impossible to get back together, even if this is a car you’ll never be able to get pretty. Hey, the current owner refers to it as his “garbage son,” so that gives you a good idea of how it is.

Well, here we are. Two rather scabby examples of small, nimble sports cars. Are you choosing the dubiously repainted MG or the visibly-crusty Opel?

Thomas is a Nu Rave-blaring, heel-toe downshifting, maple syrup-swilling, chassis-geeking, junkyard parts-hauling, floppy-haired scenester who's been writing about cars since college. His current ride is a 2006 BMW 325i with the six-speed manual gearbox. Instagram: @thomas.hundal Twitter: @thomashundal
Read All My Posts »
PrevPreviousThe Real Taillights Behind ‘Taillight Ruiners’: Cold Start
NextTesla Rear Side Marker Lights Are Having Problems In China And That’s A Big Deal Because We Love Side Marker LightsNext