1977 MG Midget or 1980 Triumph Spitfire: Which Is Better Qualified To Represent The LBC?

Good morning and happy Friday! You might have noticed from the header image that we’re doing something just a little different today. The Friday roundups were feeling just a little formulaic, like a CBS cop drama (“Tonight, on NCIS: Omaha…”), and I wanted to mix it up a bit. So on Fridays, for a while, I’m throwing out the rule book and doing whatever I feel like (Gosh!).

First, let’s look at how yesterday’s toys did:

Close one, but the Baja Bug wins. I’m sure neither one will have trouble finding a new home, though; they’re both way cool projects.

Now, today, we’re upping our standards (like Pat Paulsen!) and looking at a pair of cars in much better condition than our usual fare. These two are from a category near and dear to my heart: little British cars, or LBCs, for those in the know.

But before you go thinking these are too nice for the likes of us, keep in mind that these are both late-stage British Leyland products, and as such, no matter how nice they may look, both are still projects. (Hell, they were projects when they were new.) But they’re also both pretty solid examples of the breed, and either one would be a hell of a lot of fun on summer weekends. So let’s check them out. 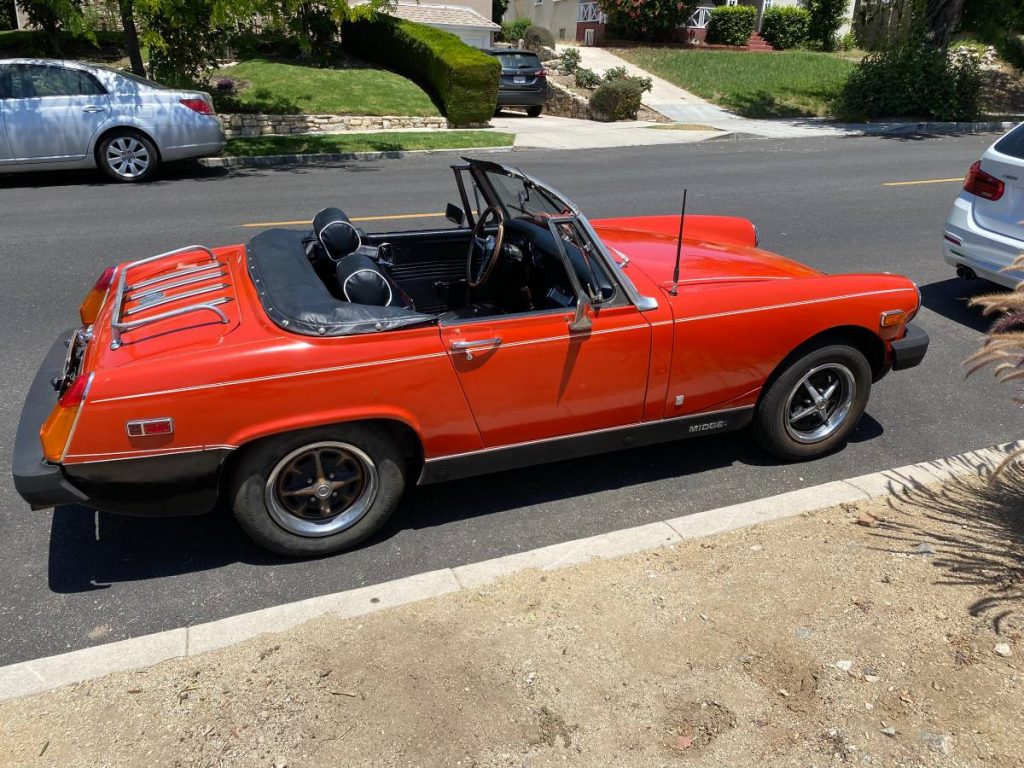 Runs/drives? Quite well, according to the seller

The story of the British auto industry from the 1950s to the 1980s is a story of mergers, acquisitions, quality control problems, strikes, bankruptcies, and really fun to drive little sports cars. The MG Midget, introduced in 1961, started out as a clone of the Austin-Healey Sprite MkII, but outlived the Sprite by almost a decade. By the time this MkIV Midget was built, the original BMC A-series engine (shared with the original Mini) had been replaced by a Triumph engine – actually the same engine as the Spitfire below. 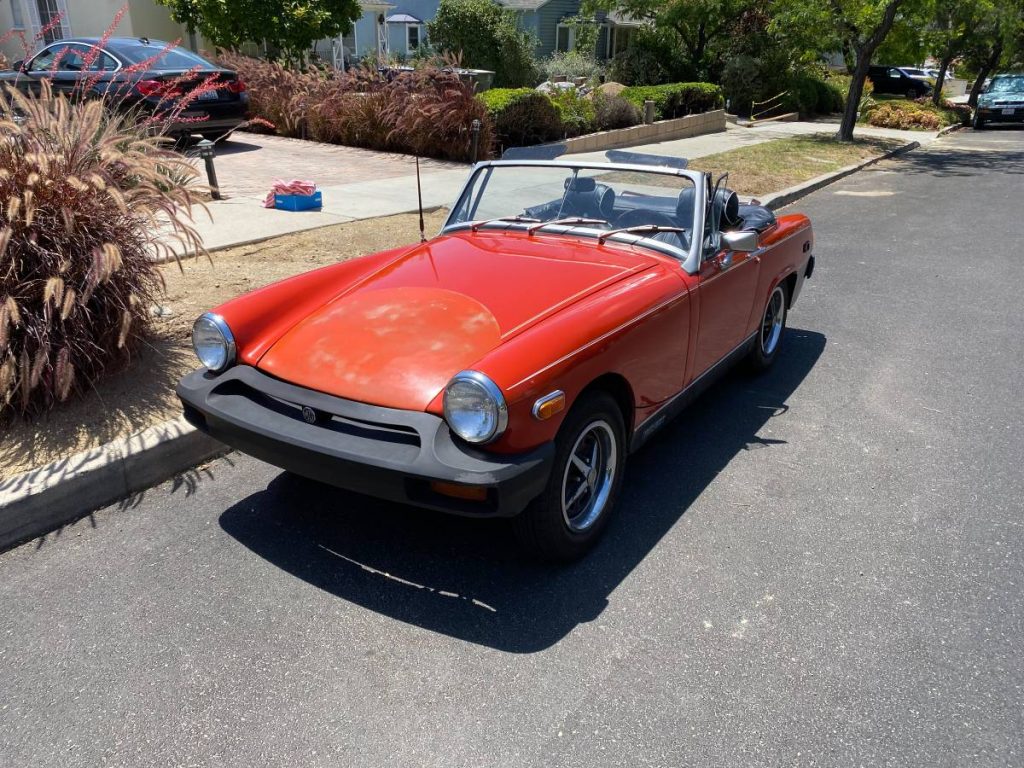 It had also acquired a set of big black rubber 5 mph bumpers similar to those on the MGB, but I always thought the Midget wore them better. It looks like a happy little frog. If you don’t like the big bumpers, the good news is that the Midget is easier than the B to retrofit with the old-stype chrome bumpers. It looks really cool with no bumpers at all, for that matter. 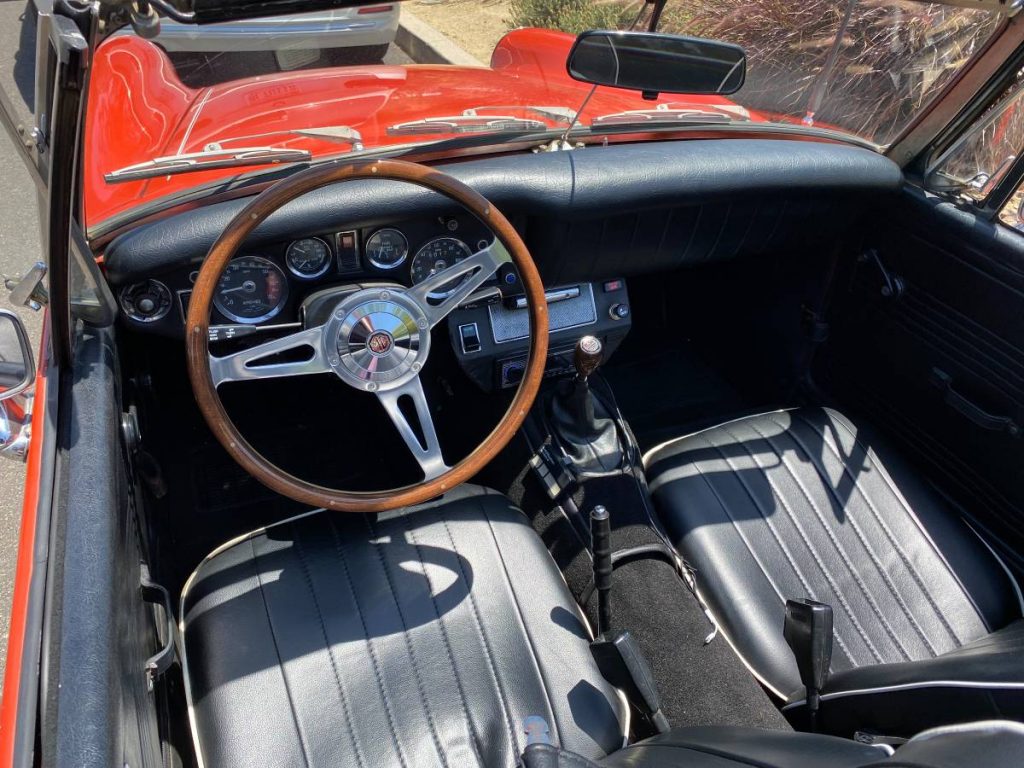 Make no mistake; this is a tiny car. It’s snug inside, and you had better like your passenger a lot. But that smallness and snugness translates to a wonderful immediacy and imtimacy with the road. You hear modern Minis and Fiat 500s described as having “go-kart-like handling;” they’re Buick Electras compared to an MG Midget or Austin-Healey Sprite. You can feel everything this car is doing, every bump in the road, every rail in the gearbox sliding into place, every loading and unloading of the suspension through the turns. It’s not fast, with only 65 horsepower on tap, but it’s so responsive that you won’t care. 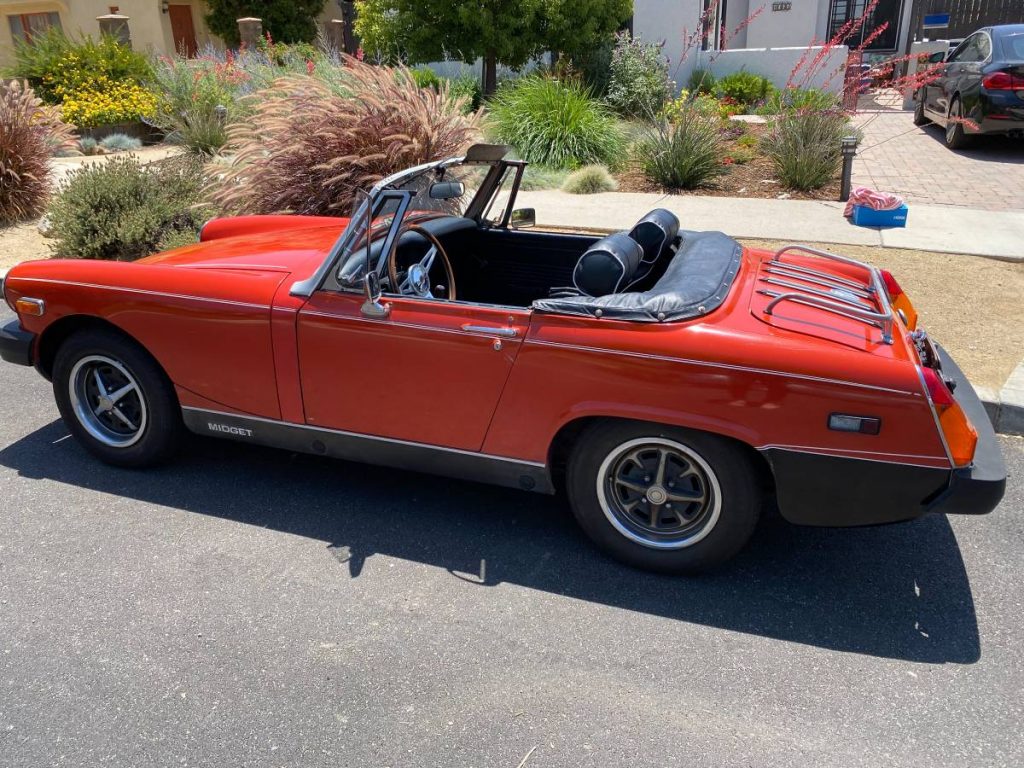 This Midget isn’t perfect, but it is really nice. There’s something odd about the paint on the hood (sorry, bonnet) and a few other places. But being a California car, there shouldn’t be any worries about rust. Inside, it looks really nice, with fresh upholstery and carpet and a new Moto-Lita style steering wheel. The seller says the top needs replacing, but a replacement is included. A bunch of unspecified mechanical work is also mentioned; it would be worth looking over the receipts to see what has been done. These are simple and stout cars, but they’re not low-maintenance. 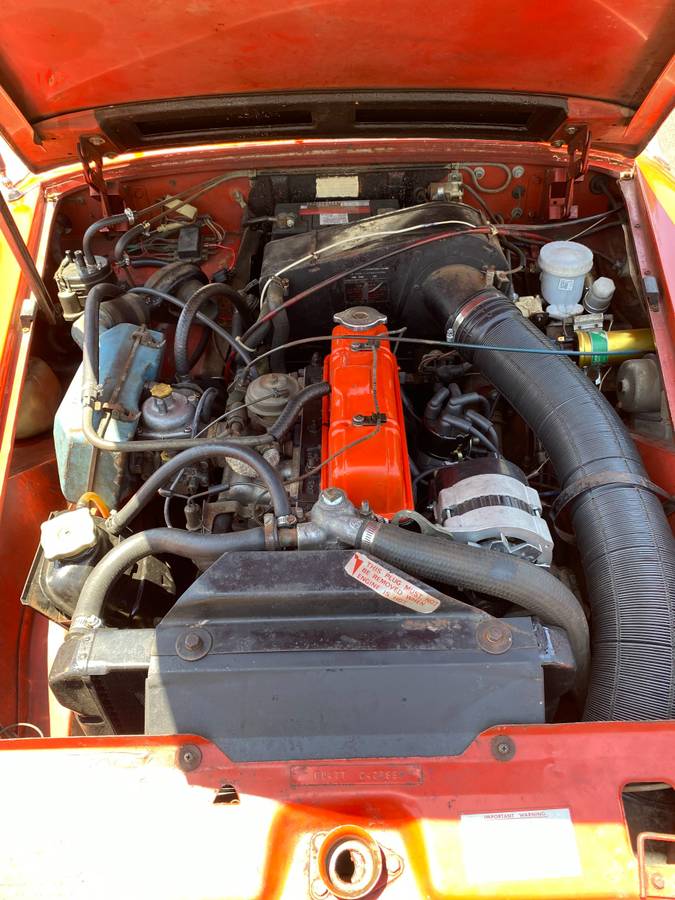 These cars have been bouncing along the low end of the classic sports car market for a lot of years, but they’re starting to gain some respect (and value). Like most classics, it’s better to spend a little more to get a good one, unless you’re looking for a long-term project (take it from someone who knows). This looks like a good one, but not too nice to drive and enjoy. 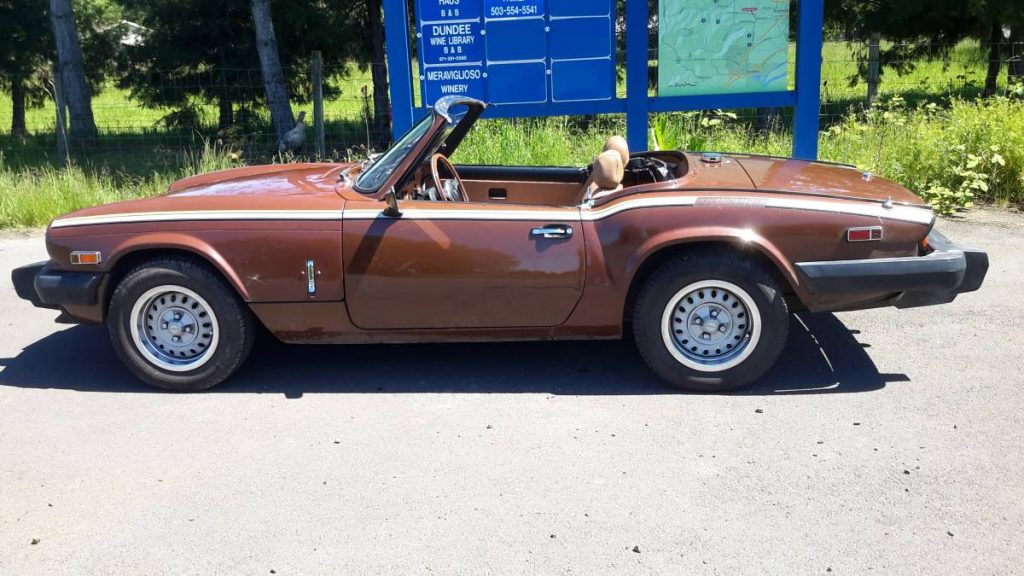 Rival to the Sprite/Midget, but also its stablemate after the British Leyland merger, the Triumph Spitfire was always just a notch cooler than Healey’s little roadster. Maybe it’s the styling by famed Italian designer Giovanni Michelotti, or the swing-axle independent rear suspension, or the name taken from Britain’s most famous WWII fighter plane, or the way the bonnet opens with the entire front of the car flipping forward like a Jaguar E-Type. Whatever the reason, the Spitfire was a big success for Triumph, selling over 300,000 examples during its 18-year run. 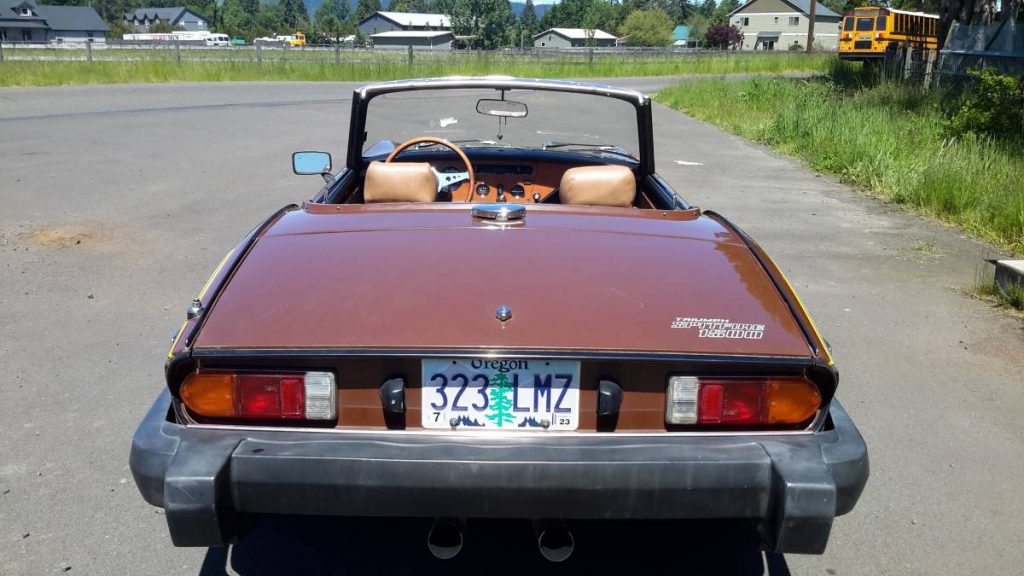 This Spitfire is one of the last, from the final year of production. Although saddled with gigantic rubber bumpers like the Midget, and hobbled with a single Zenith-Stromberg carb like the last of the MGBs, the Spitfire’s handling got better and better as years went by. Triumph continued to develop and improve the swing-axle rear suspension right up until the very end. In stock form, the US-spec model is slow, but the twin SU carbs of the UK-spec Spitfire can be retrofitted to make it a little quicker. 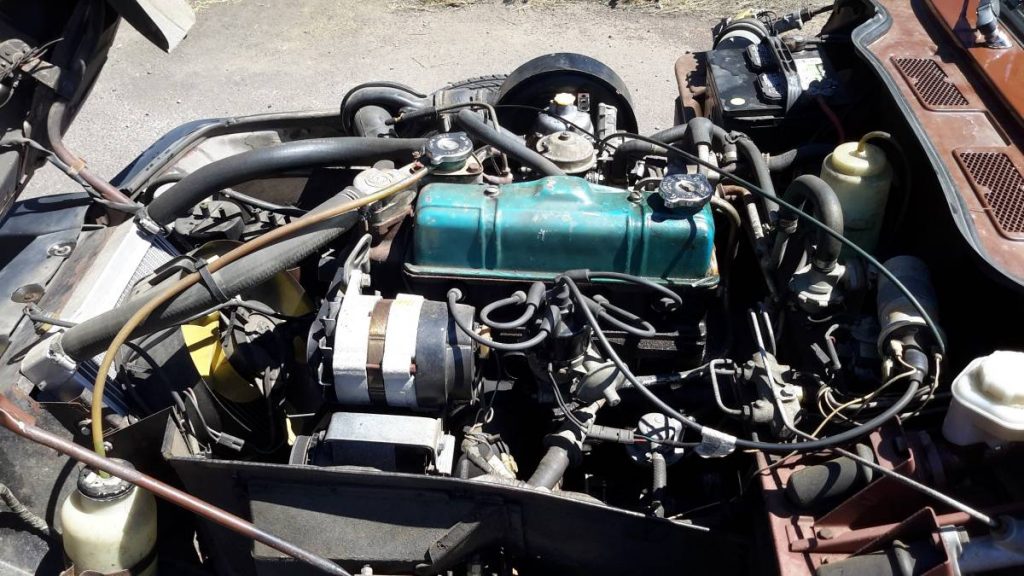 This Spirfire looks to be stock, and very well cared for. The seller lists a lot of recent work, and it looks like they started with a nice clean car to begin with. It wears its original paint, and has had an interior refresh like the Midget, including the same Moto-Lita style steering wheel as the Midget (they’re a really popular upgrade for British sports cars). 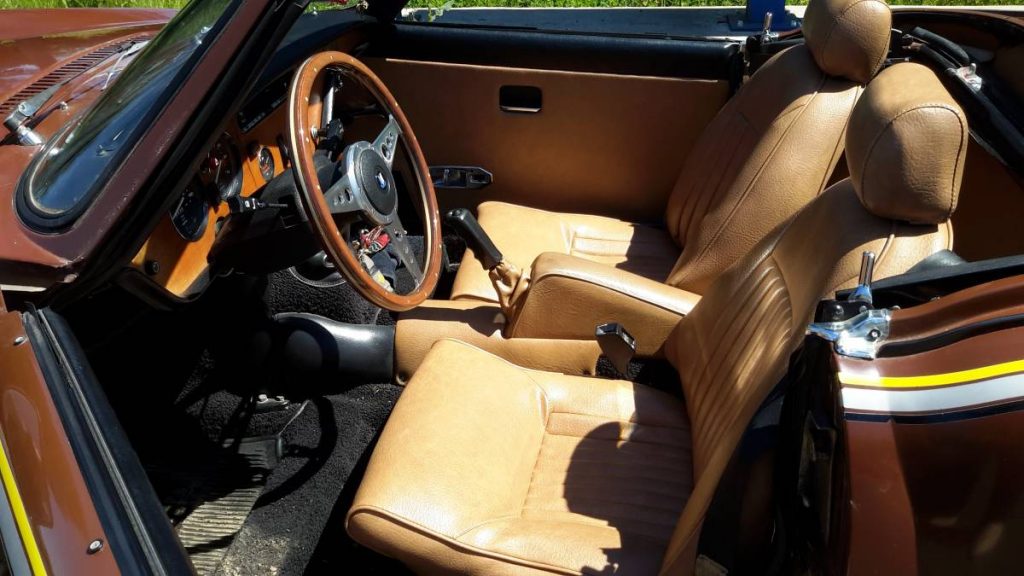 I came really close to buying a car almost identical to this one about twenty years ago, for $2,000. Looking at this one makes me wish I had gone for it. I still love the styling of these, and I don’t care that it can be outrun by an automatic Kia Rio. It’s a cool, fun, and still affordable bona-fide British classic. 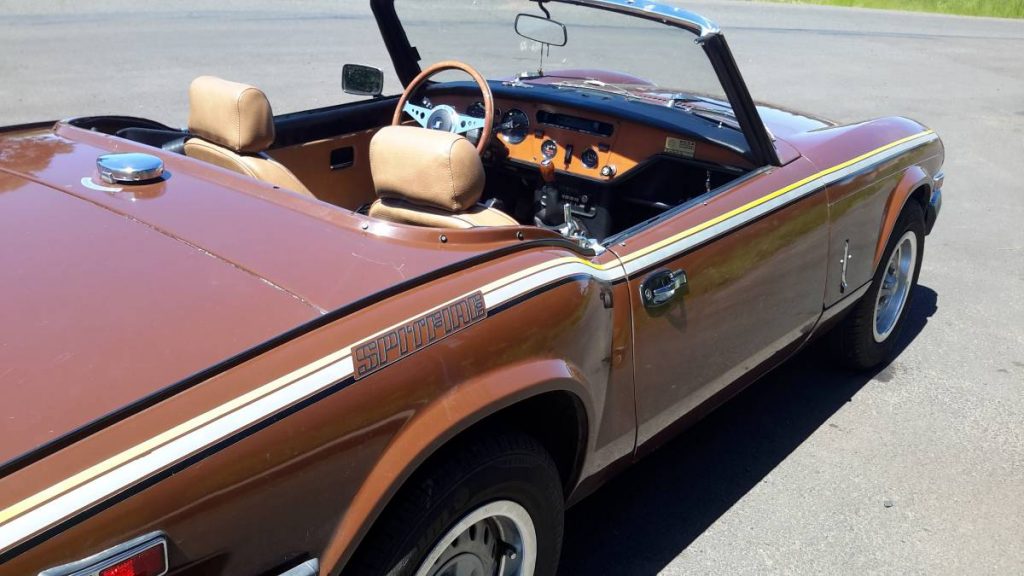 And look at that big chrome fuel cap right in the middle! And the big chrome latches on the sides of the bonnet, and those sharp steel wheels… This Spitfire comes with the factory hardtop, as well, so the fun doesn’t have to stop when the skies get cloudy.

OK, obviously I’m biased. I have loved little British cars since I was very small, and it’s wonderful to see a pair of them in such good condition for such reasonable prices so many years later. I’d take either of these in a heartbeat, but which one do you prefer?