Last week – or was it the week before? Man, I’m a mess. Anyway, recently I went to Copenhagen to drive a car I’ve been anticipating for years: the VW ID.Buzz, the electrified re-incarnation of the legendary Type 2 Microbus. Now, I can’t talk about any driving impressions or anything like that for another four hours or so because of the embargo, but I can give you a little taste of it before then. So that’s what this is: An appetizer of rabbit caviar, which I think is the technical culinary term for Easter Eggs. Metaphorical Easter Eggs, I mean, as in little hidden fun things the VW engineers and designers hid into the new ID.Buzz. I think these are all of them, but it’s possible I missed something. There’s some fun things here, so let’s dig in!

The console between the front seats is removable 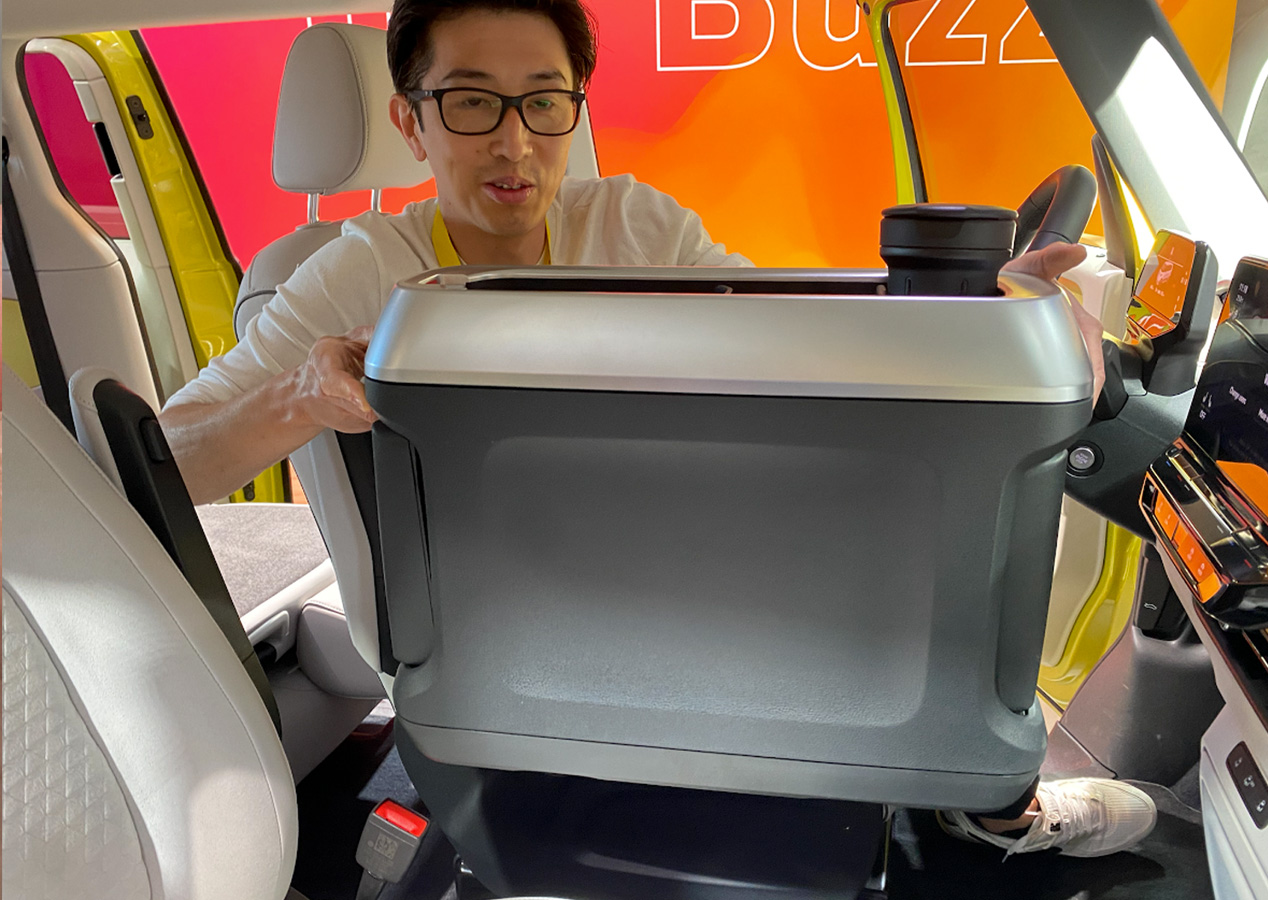 This may be one of the more useful of the Easter Eggs: The center console between the front seats, which has storage compartments and drink holders, is very easily removable! It latches into place, and can be lifted out, where you can then use it like a cooler (I’m not sure exactly how insulated it is, but I think it could definitely hold ice, at least for a while) or set it outside like a little table if you’re camping or just hanging out.

That’s one of the ID.Buzz’ interior designers showing me how it lifts up, and I apologize for using a photo where he’s mid-blink.

It’s a clever feature, and I bet could end up more useful than you’d think.

That console has some other clever bits of its own, too

That same console has re-sizable cupholders/cubbies on the top section, and the little dividers you use to change the sizes of the sections have their own special features: 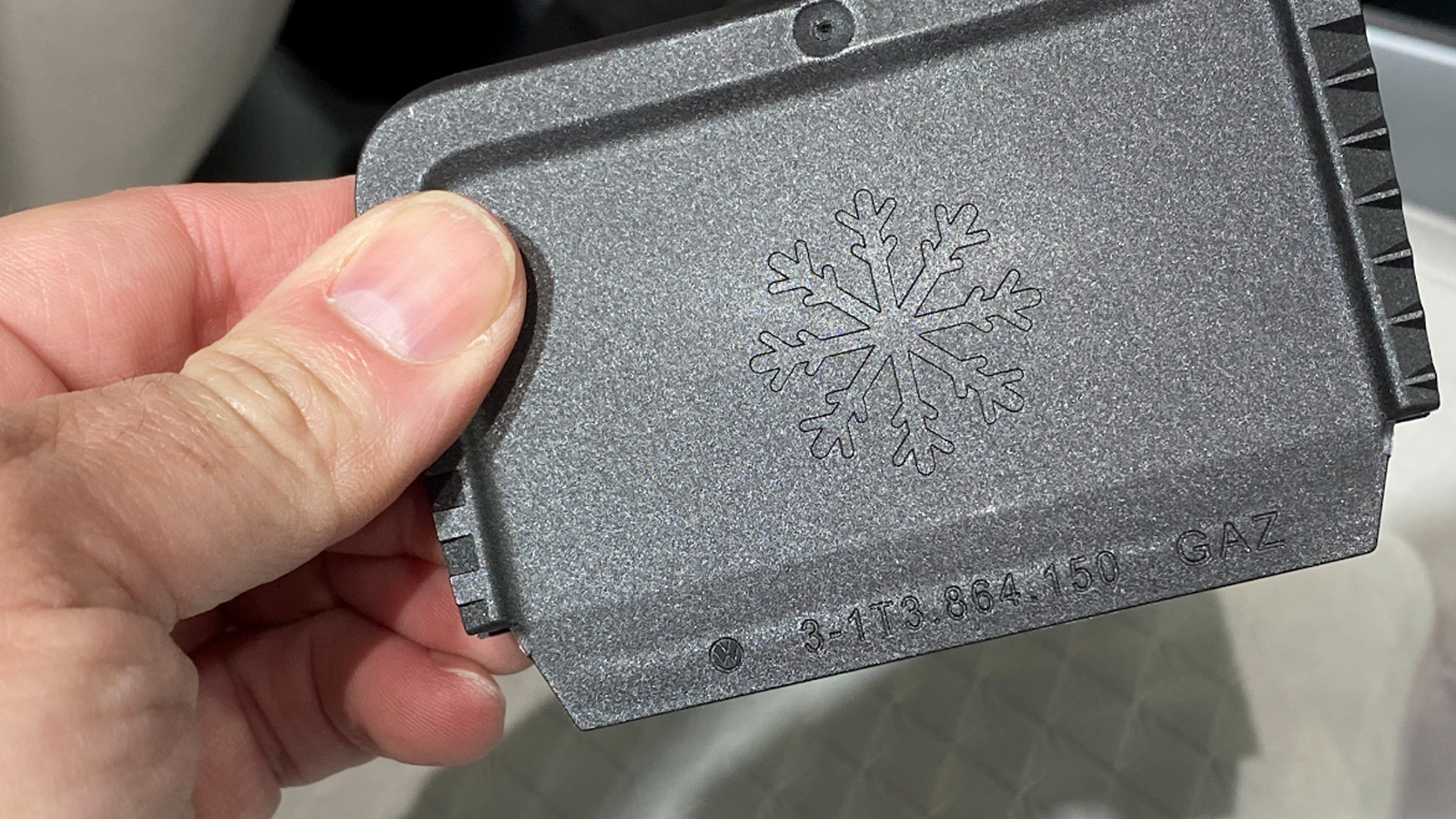 One doubles as an ice scraper. 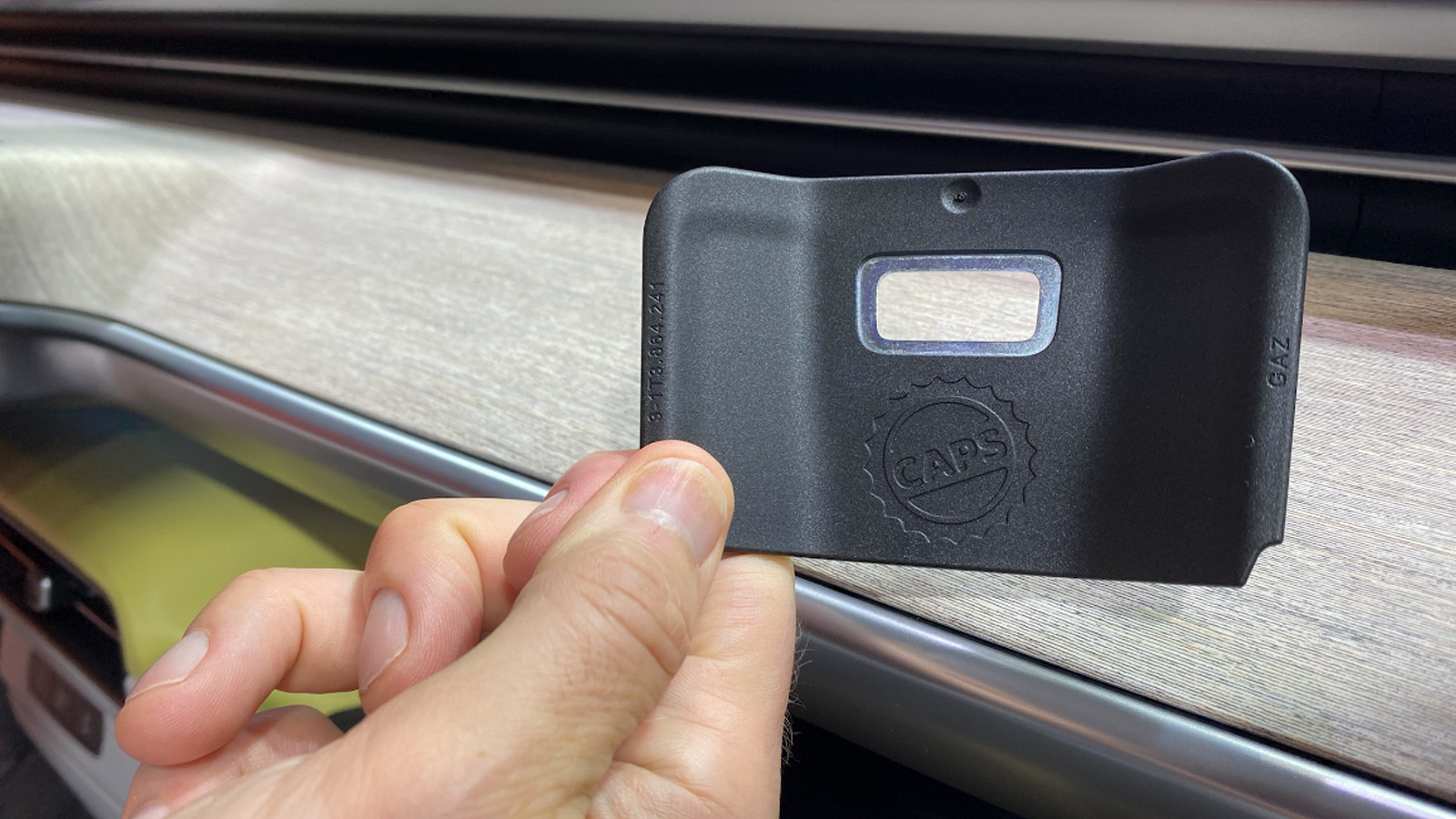 …and the other one has a built-in bottle opener. Handy! 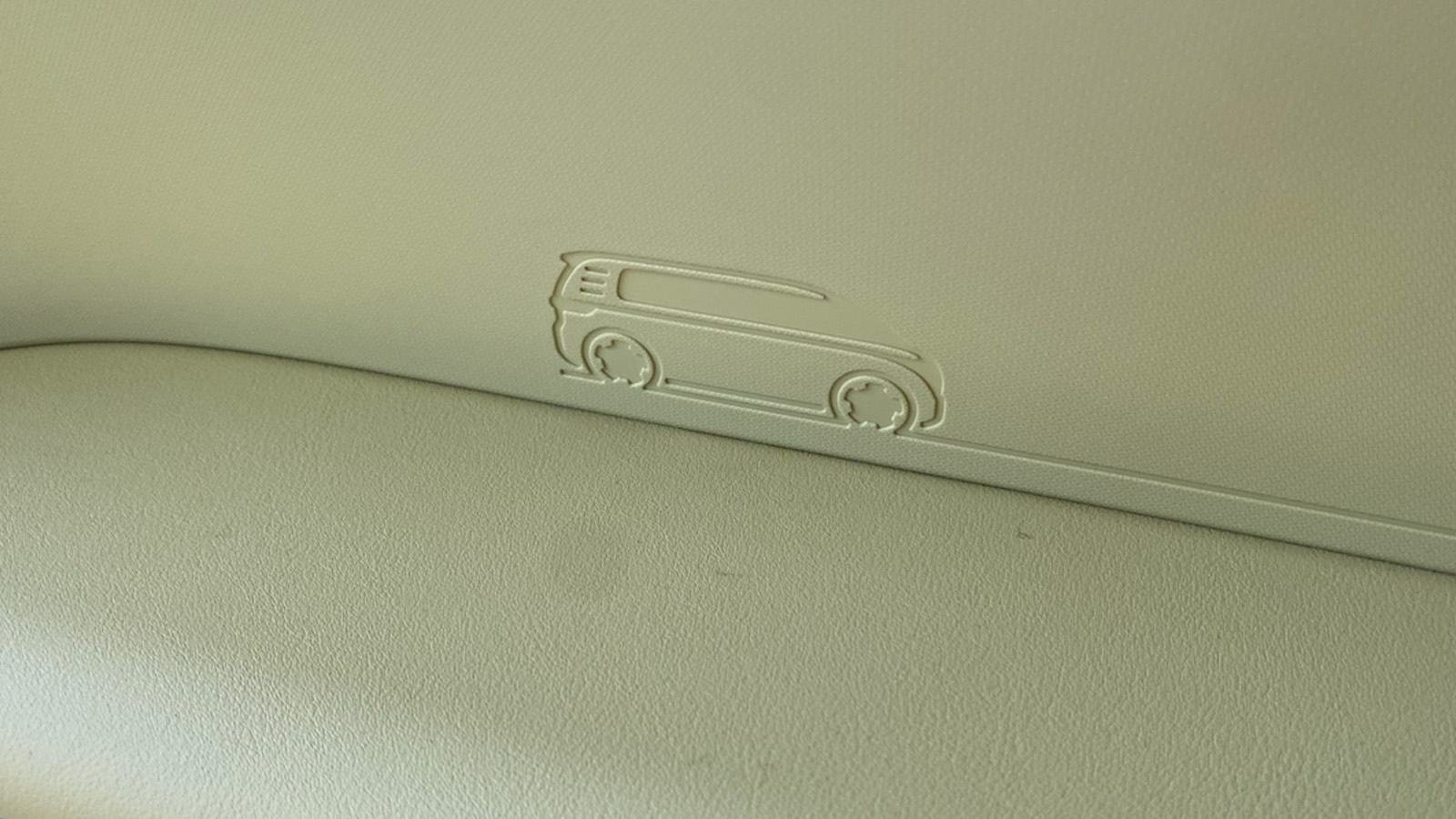 Just in case you forget what you’re driving in or being driven around in, the ID.Buzz provides a number of locations for you to see a simplified profile of the vehicle you’re in, just to keep you nice and informed.

Who says screw removal can’t be fun and flirty? 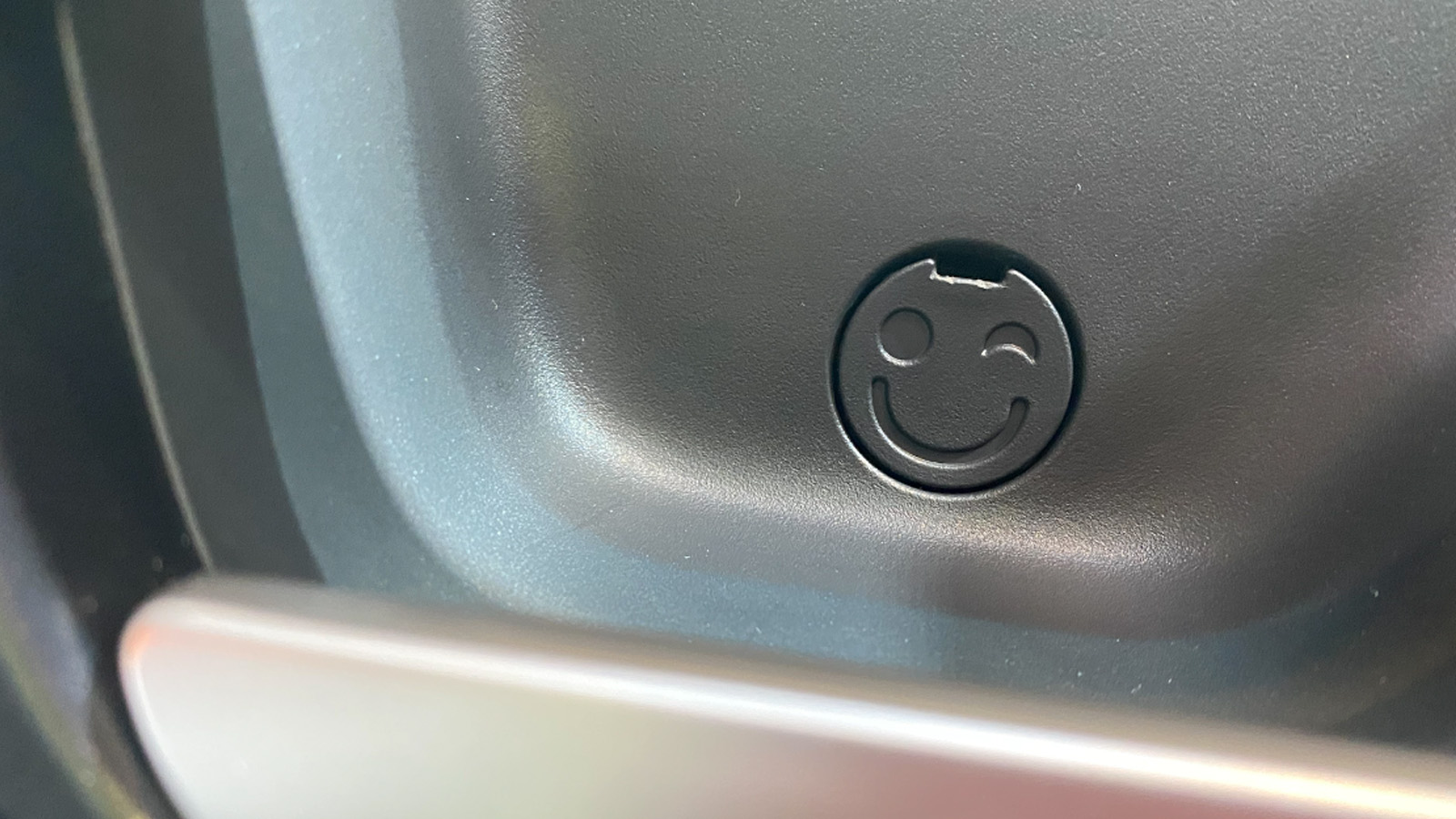 Have you ever had to remove screws from some interior panels, and were disappointed that none of the ridiculous little screw-shame-hiding covers bothered to flirt with you at all, not even a little? Well, VW has solved this problem, because a lot of the plastic screw covers are molded with a little winky face right on them! Much better.

Clever cargo management via the magic of Velcro 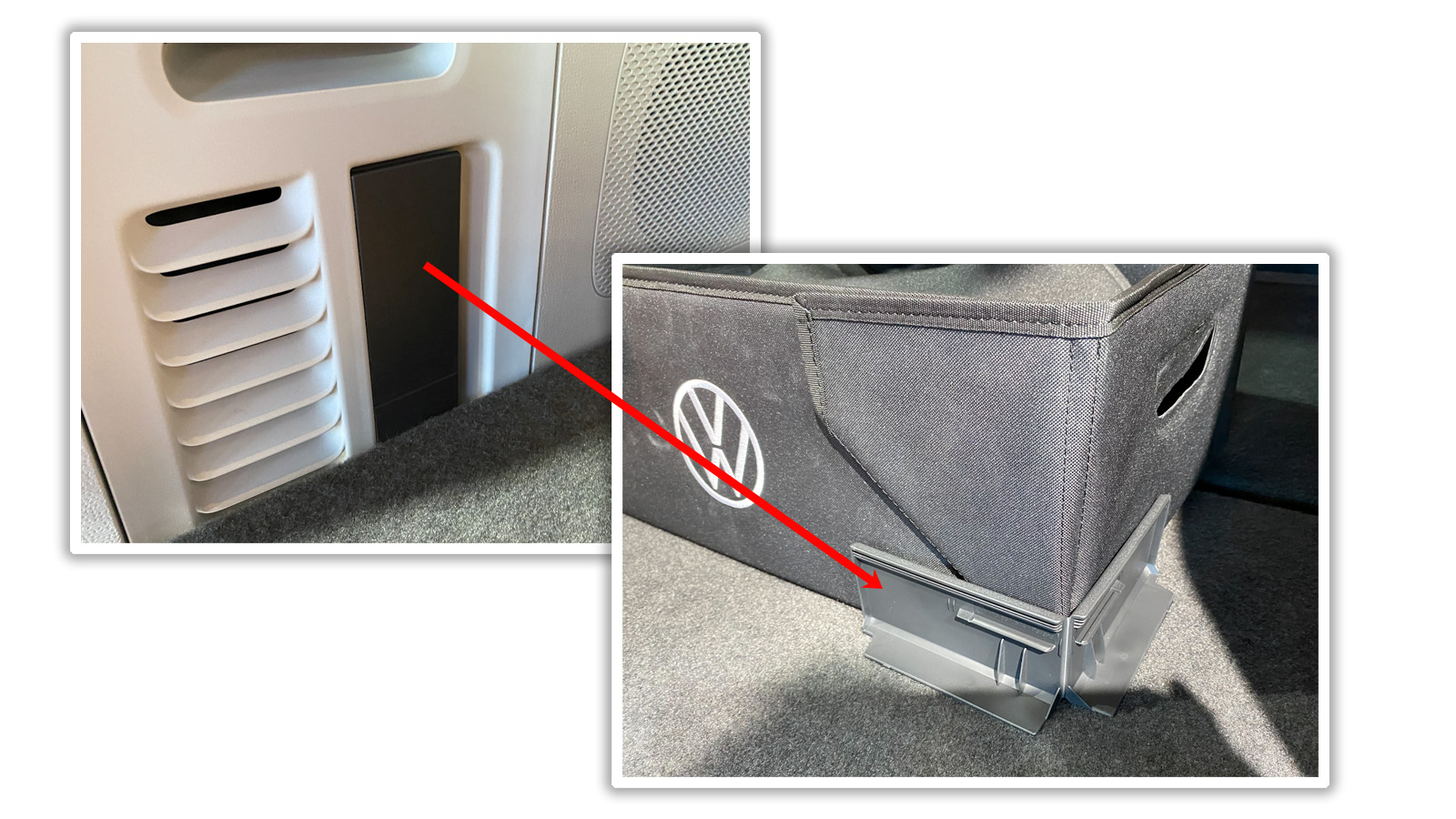 I think this qualifies as an Easter Egg because what’s going on here is not obvious at all until you learn the secret. In the cargo area are these little black plastic rectangles inset into the side panels. They look like they could just be some sort of access panel or trim of some sort, but they’re much better than that: They’re cargo organizers/securing brackets.

See, each one removes and folds into an L-shape, and they have Velcro on their little flanges there, so if you have boxes or suitcases you can use these to insure that those boxes or suitcases or caskets or whatever don’t go sliding around. Quick, convenient, easy solution to an actual problem.

Here are a few that may or may not be considered Easter Eggs, but are still something: 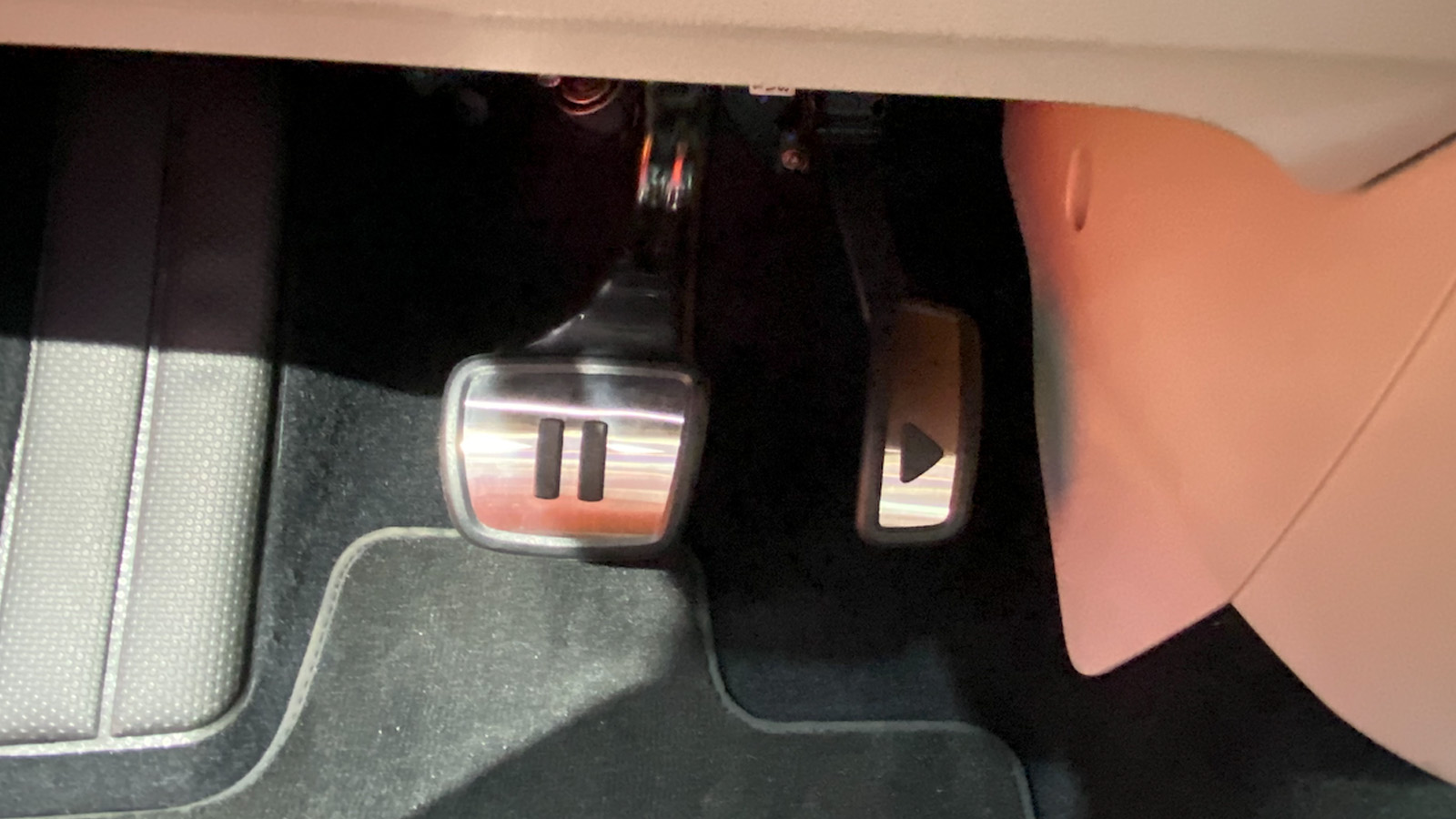 The play/pause markings on the brake and accelerator aren’t unique to the ID.Buzz (the other ID cars use this, too) but they’re still cheeky.

Also, does this count as an Easter Egg, or just a feature: 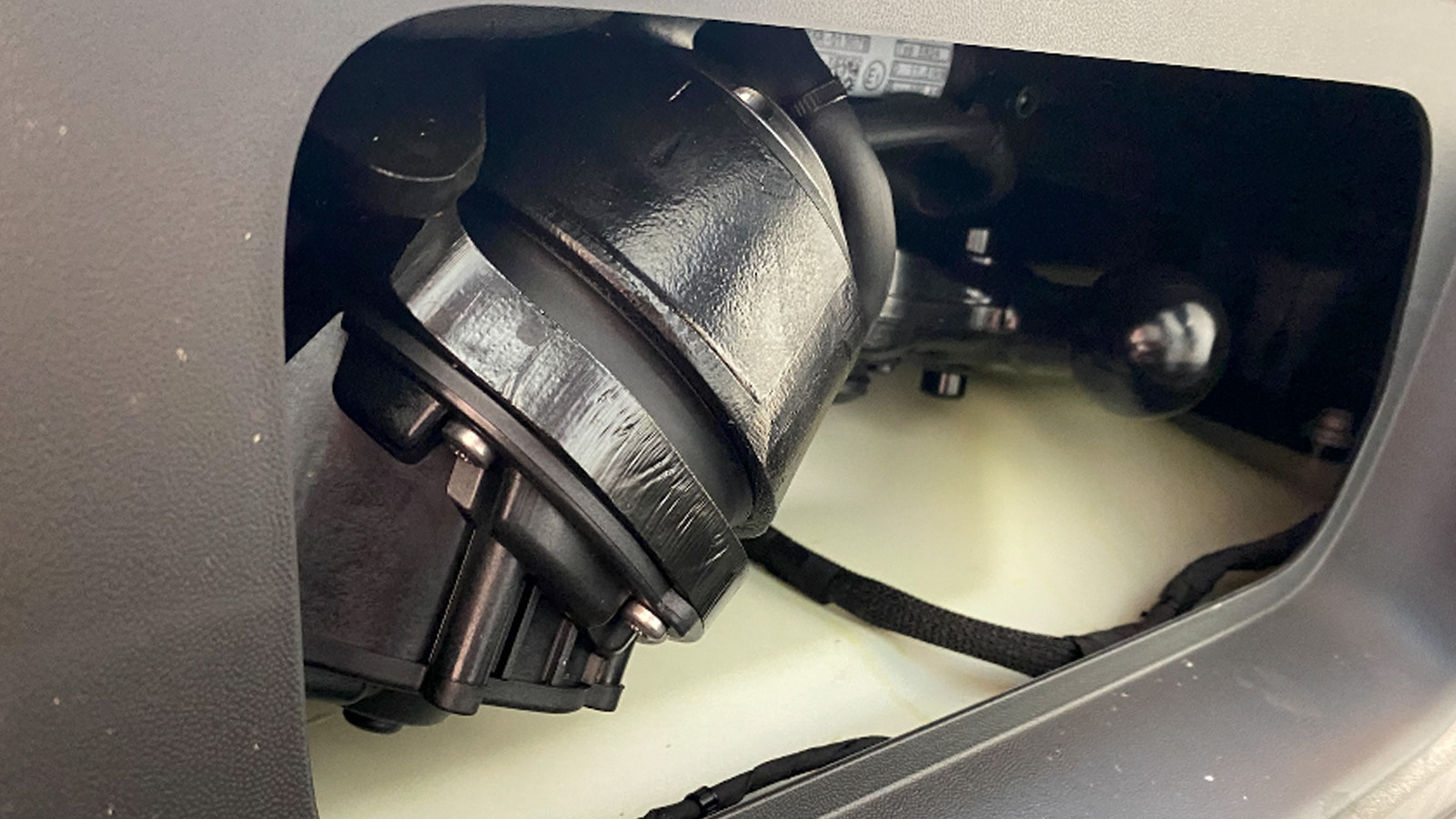 That’s the fold-out tow hitch, the funny kinda-phallic Euro-style ones. It’s hidden, and then folds out, so I think that at least makes it Easter Egg adjacent.

This may not be so much an Easter Egg as it is just a little reminder of Volkswagen’s heritage: 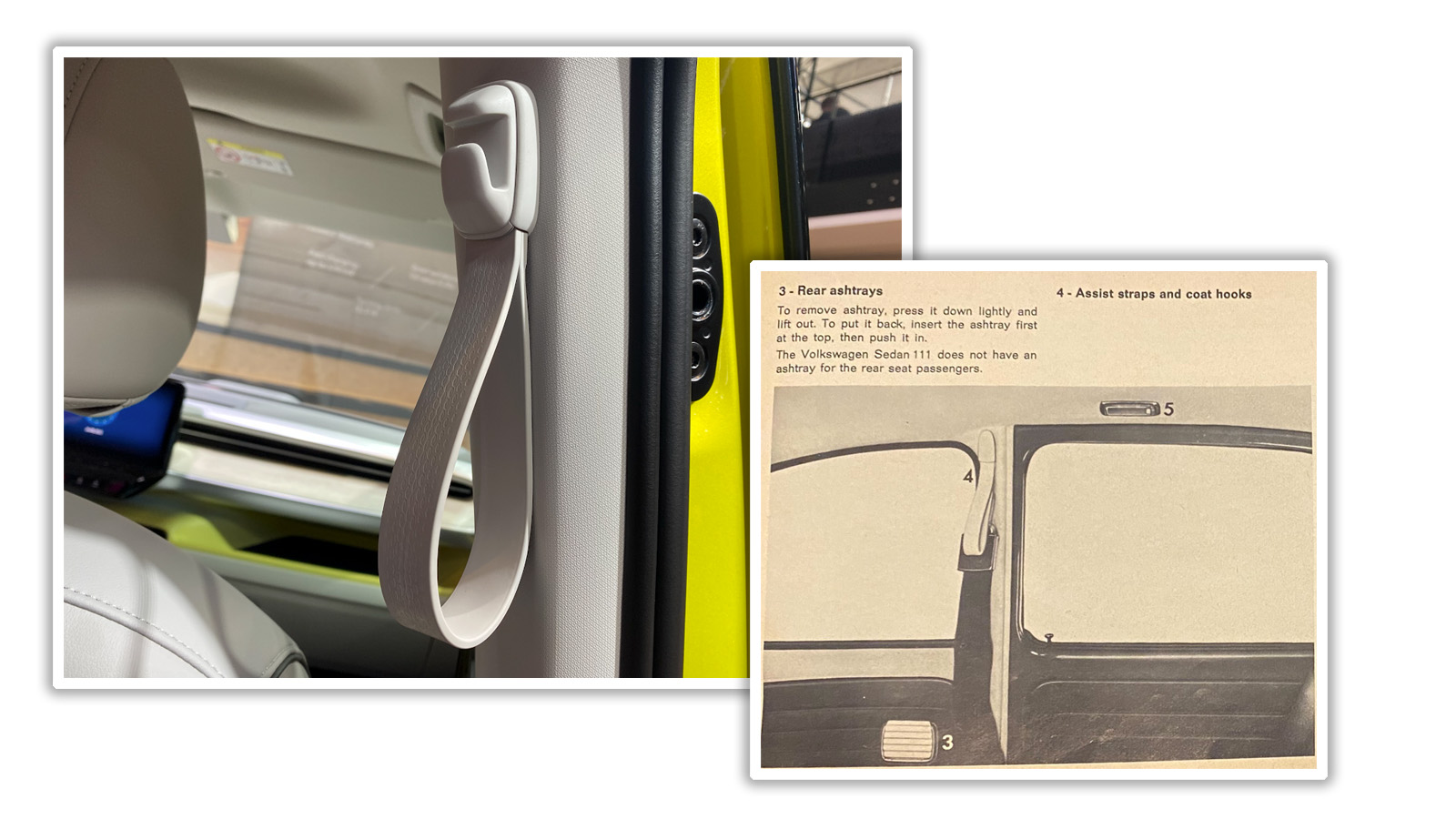 That’s a little passenger assist strap/coat hanger, a basic design of which has been used in VWs since the Beetle started in the late 1930s. I will always associate those things with VWs. 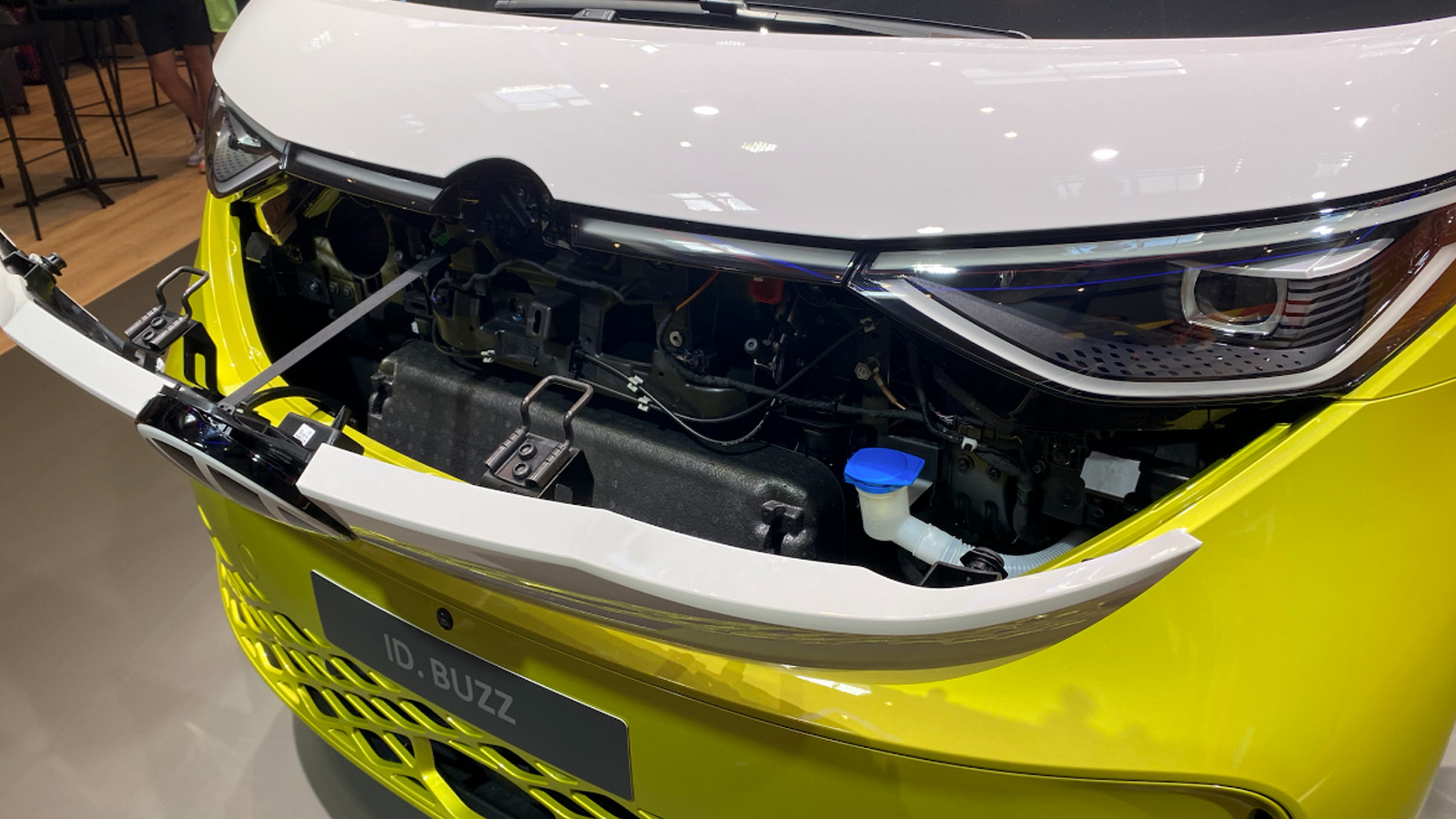 This again may not be an actual Easter Egg, but I bet you could cram some kind of soft luggage in the front non-trunk compartment. Like, something soft and rolled up could be crammed in there, like a small outdoor rug or something. I’m sure VW would say no, don’t do that, but you know, I bet you could.

Yet another self-portrait, this one wet 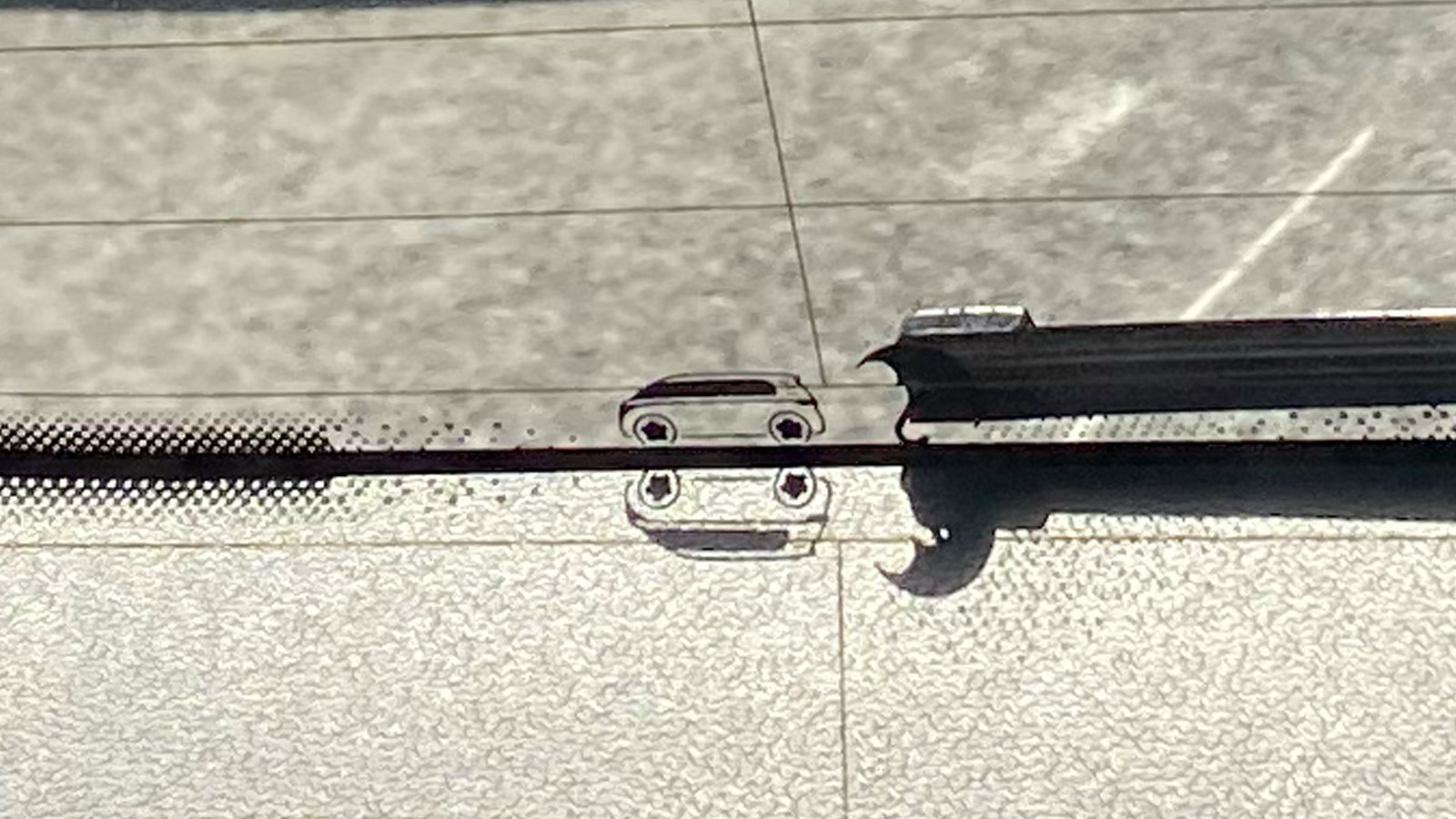 The rear window is hiding, under the rear wiper, a little bus with an umbrella, to remind you that sometimes things get wet. I do like how the Frit Band seems to be dissolving into the rain, too.

In case you get really, really lost 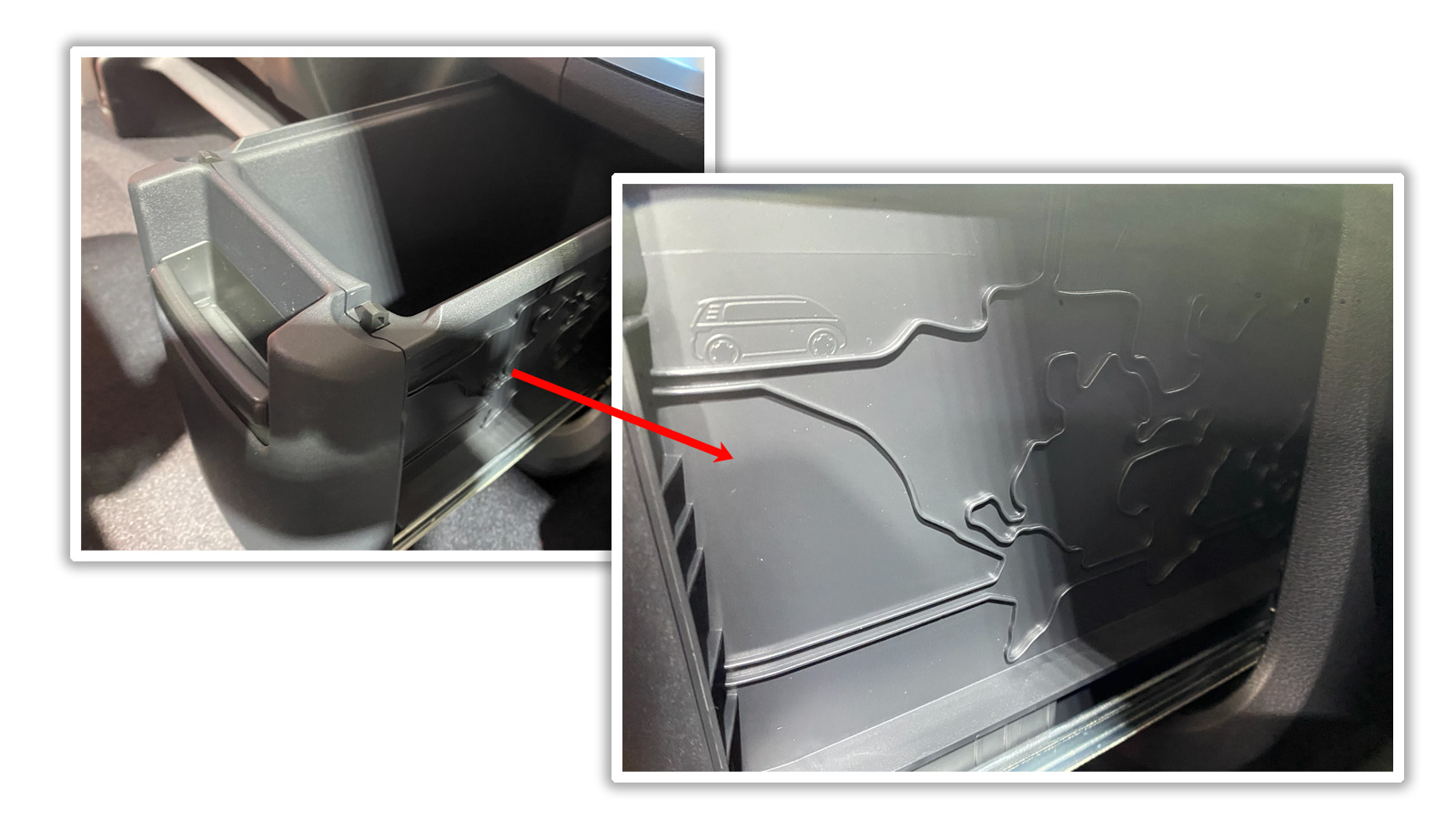 And, finally, we have the Map of Last Resort, molded into the side of one of the drawers in the center console. It’s a whole world map, so it’s really only going to be useful if you’re lost on a continental level. Still, better than nothing, right?

I'm a co-founder of the Autopian, the site you're on RIGHT NOW! I'm here to talk to you about taillights until you cry and beg me to stop, which I absolutely will not. Sorry. Hug? Also, David's friend.
Read All My Posts »
PrevPreviousYou Can Now Buy The ‘Mid-Engined Supercar’ Renault Clio V6 America Never Got
NextThe New 207-MPH Bentley Flying Spur ‘Speed’ Puts The Evasion In Tax EvasionNext