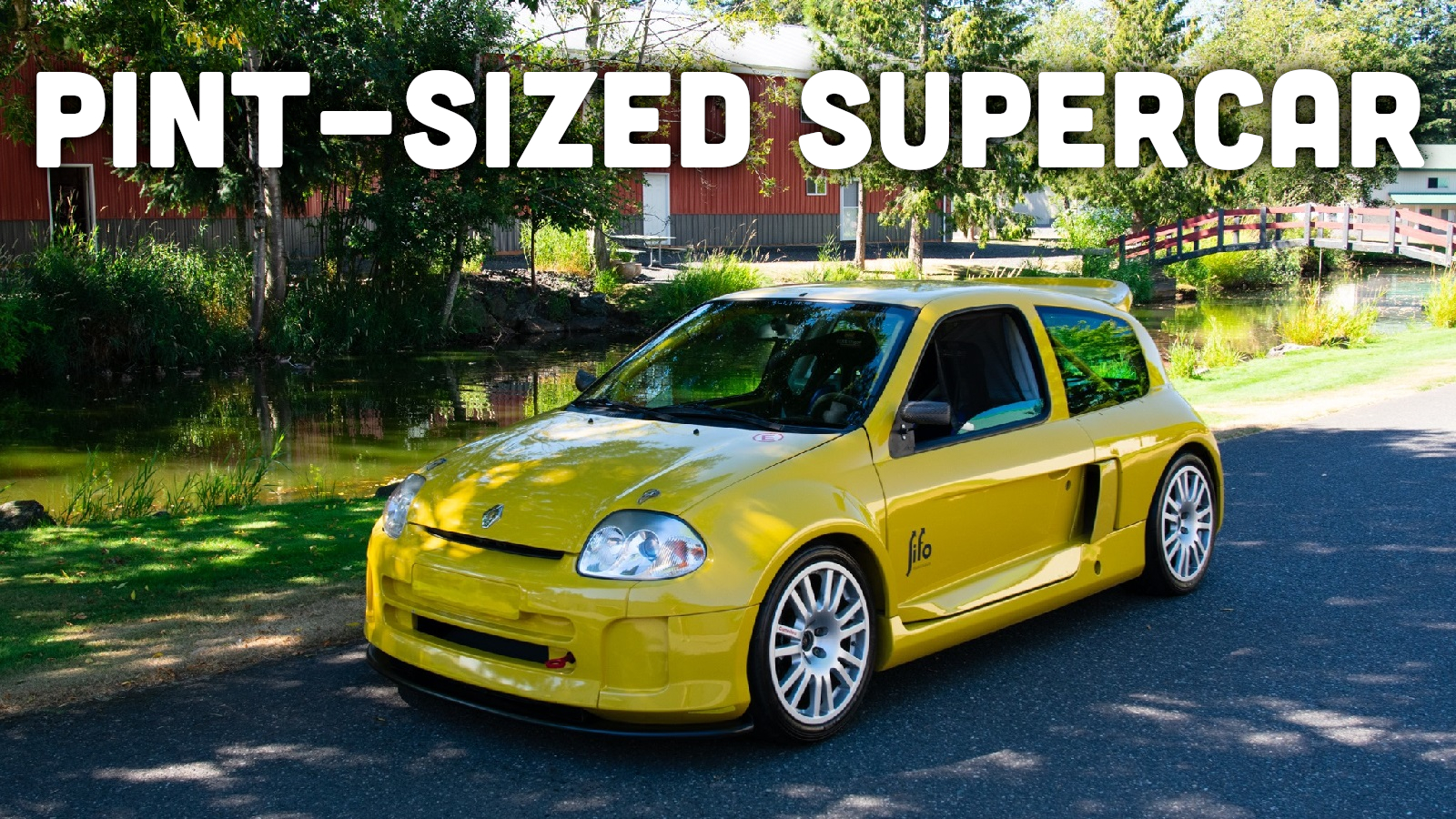 One of the hardest parts about being a lover of cars from far off lands is that you’ll spend much of your life dreaming about owning one. Enthusiasts in the United States have to wait until their dream cars reach the ripe age of 25 before they can import them. Sometimes, you can beat importation law if you have just about all of the money in the world. Or, you can find the stripped out, track version of your favorite car. That’s why you can buy this 2001 Renault Clio V6 Trophy today, right here in America. But, of course, there is a catch.

In January 2021, I announced that I was importing a Honda Beat from Japan. Soon after, the scope of my quest expanded to include a second kei car, a Suzuki Every van. I employed the help of Washington state-based importer The Import Guys to help me find and import the Beat. The shop’s owner, Dylan Cain, guided me through the process of importing a car and actually made it easier than buying a car fresh off of a dealership lot. And while he was helping me and his other customers with cars, Cain was working on a project of his own.

In December 2020, The Import Guys Facebook account posted that the shop purchased a 2001 Renault Clio V6 Trophy in a Japanese auction. What would follow was a long process of paperwork and bureaucracy that would see the car not arriving in America until June 2022. But now the beautiful yellow thing is here, and some lucky person is going to take it home in about four days’ time.

How A V6 Ended Up In The Back Of A Clio

If you’ve watched some Top Gear or played some Gran Turismo, chances are you’re familiar with the Clio Renault Sport V6. If not, I’ll give you a rundown. In 1998, Renault began celebrating its 100th birthday with the launch of the second-generation of its Clio hatchback. The new car is rounder than the first-generation, and features a neat sloping roof that gives it a bit of a sporting look. Normal second-generation Clios featured a four cylinder engine up front, driving the front wheels.

To promote the car, Renault launched the Clio V6 Trophy series. Replacing the Renault Sport Spider Trophy, the Clio V6 Trophy featured Clios modified for competition. But it wasn’t just plopping a V6 up front. Instead, it was a major transformation of the whole vehicle. Renault chucked out the back seat and in its place, lowered in a 3.0-liter V6 pumping out 281 HP. That beating heart behind the driver seat drives the rear wheels. To support this change, the vehicle saw changes to its structure. The race car is wider, lower, and features a slightly longer wheelbase than the standard car. Track width is also wider and the vehicle is fitted with wider tires. Feeding that back-seat engine are two huge air intakes flanking the vehicle’s sides.

The cars then went on a tour racing around Europe:

[T]he series toured some of Europe’s most famous circuits with the performance of the heavily reworked Clios and the premise of closely matched racing attracting several top drivers.

In the UK, the series took in such circuits as Donington Park and Silverstone, while a few cars would also run in the British GT Championship that also included the likes of Snetterton, Knockhill, Brands Hatch and Rockingham.

While the racing was popular, Renault says that things really took off when it arrived at the Paris Motor Show that year with a concept for a roadgoing version of the racing vehicle. Renault says that the Clio Renault Sport V6 pays homage to the Renault 5 Turbo, and I think the company nails it. It was a hit, and Renault decided to team up with Tom Walkinshaw Racing to see the road car become a reality.

The end result is something that Renault says is 98 percent faithful to the concept. The roadgoing 2001 Clio Renault Sport V6 is 6.7 inches wider, 2.6 inches lower, and has a 1.5-inch longer wheelbase than the base car. Track was increased by 4.3 inches up front and 5.4 inches in back. The engine, adapted from the Renault Laguna, is detuned to 227 HP, but it still accelerates to 60 mph in 6.4 seconds and goes on to a top speed of 147 mph. You got a limited-slip differential, but no traction control. And where the engine would be in a normal Clio is a frunk.

In 2003, the Clio Renault Sport V6 would get even better, with the V6 cranking out 252 horses to the rear wheels. That dropped 60 mph acceleration to 5.9 seconds and top speed raised to 153 mph. And while the cars may be insane machines, they still had some nice creature comforts. You still got air-conditioning, automatic headlights, rain sensing windshield wipers, and what sounds like a decent six-speaker stereo system.

Just 2,864 roadgoing cars were made, making them somewhat a rare piece of history. Unfortunately, the soonest that you’ll be able to import one of the roadgoing versions is 2026. However, you can have one now if you’re willing to fill the interior with a roll cage and never put a plate on it.

One Way To Get Forbidden Fruit

The infamous “25 Year Import Rule,” or officially, the Imported Vehicle Safety Compliance Act of 1988, excludes vehicles built specifically for off-road use from the 25-year ban. But it’s not as easy as just declaring that your car is built for racing or off-roading, but getting a letter from the manufacturer confirming such, from NHTSA:

To import a racing vehicle into the United States on a permanent basis, you must:

File with Customs, upon entry, an HS-7 Declaration form on which Box 8 is checked, indicating that the vehicle was not manufactured primarily for use on the public roads, and is therefore not a motor vehicle subject to the Federal Motor Vehicle Safety, Bumper, and Theft Protection Standards.

Attach a copy of the manufacturer’s letter to the HS-7 Declaration form that you furnish to Customs.

Back when I picked up my Honda Beat from the Import Guys in May 2021, the shop’s Renault Clio V6 Trophy was still in Japan.

Cain told me that he was still working through the process to ready the car for importation. Indeed, this car is clearly a racing vehicle, but the feds will make you prove it. I asked Cain about importing other vehicles like this, and he told me that while it’s possible, there’s so much work involved to clear a car like this that the car better be worth it. And the government doesn’t move fast, either, so there’s some sitting and waiting for the next move. Thankfully, the Import Guys were triumphant, and the car finally arrived in June of this year.

Awesomely, you do get copies of these documents with the car, and you get to see the work put into getting this car here.

And what do you get aside from some documents? This car is number 118 of the 159 total Trophy cars built. It appears to be in good condition and features the aforementioned wide body along with a big wing, 18-inch Cromodora wheels, Brembo calipers on all four wheels, and even working lights. This looks like something that you could drive on the road.

But then you open the door and are immediately reminded that this is a racer, not a grocery-getter.

Getting in involves swinging a leg over the cage and plopping down into one of the two buckets. You get a gauge cluster and a couple of panels controlling basic functions like lights, starting, and a fan. You do get turn signals, too.

Commanding that engine behind your head is a six-speed sequential transaxle. Oh, and you have to hear how this little yellow rocket sounds:

Of course, as I said before, this lovely car is only for track use. The documents that come with the sale note that this car can never be legally registered and driven on the road. That said, a number of states would likely slap plates on this thing if you tried hard enough (the feds, however, may look askance at such a move). Still, if you’re in the market for a track car or a rare car to add to a collection, this yellow hot hatch would be a neat toy to have. Bidding is currently at $38,000 with four days to go on Bring A Trailer.

Mercedes is a lifelong fan of all things powered by an engine. When she isn't driving one of her five Smart Fortwos or her 14 other vehicles she could be found in the cockpit of a Cessna 172 or perhaps swimming in any body of water that she could find. She also has a deep love for buses of all kinds. Please send her buses. mercedes@theautopian.com Instagram: @mistymotors Twitter: @Miss_Mercedes30 Facebook.com/neonspinnazz
Read All My Posts »
PrevPreviousFleet Update: The F-150 Drives Again, The Yugo Shits The Bed As Is The Way Of Things
Next2023 VW ID.Buzz EV: Here Are All The Easter EggsNext