Hard to believe, but we’re coming up on the twentieth anniversary of the last iMac G3 leaving the factory. For someone my age, it’s just another discontinued computer product living in a landfill now, but for many of younger generations this colorful and fun translucent Apple product was an important and still-missed landmark. 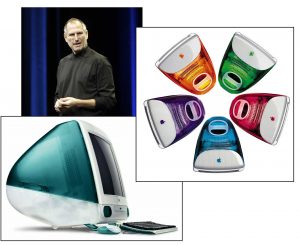 This fact was made know to me in recent comments pertaining to eighties and nineties design. A reader asked rhetorically ‘where his translucent purple car was’ that he had expected to see in the future (which is now). Our own Mercedes Streeter then stepped in with this comment:

So..did she want me to design a car inspired by or based on the G3? Here response to me was that she was ‘half joking’, but that infers there’s at least one half of her that wants to see that. I mean, we have to at least TRY to make the girl happy, right?

If we’re going to make this car, it might as well be produced by the company that made the inspiration for it. I mean, Apple has been considering making a motor vehicle for some time now, and we’ve seen a number of concepts. What if Apple had released a car about two decades ago that played on the aesthetics of their personal electronics?

Steve Jobs would have been still alive during this time, and I am certain he would have had a lot to say about this product. Jobs seemed to have had an interest in cars, though by the year 2000 he was pretty much driving only V8 powered Mercedes coupes around without license plates and parking them in handicapped spots. I can virtually guarantee one thing- Steve would NOT want this car to look like anything else available at the time. The latest concepts I’ve seen for the Apple car generally seem nice but very much car-like. As with Elon and the Cybertruck, I can see Jobs going so far as to create something controversial just for the sake of making people lose their shit.

The Apple Car would be an EV, and while it wouldn’t have nearly the range of current cars we know from the GM EV-1 that a lot was possible with even the technology of the time. The Apple Car would be designed with upgradeability in mind, knowing that the battery technology would improve exponentially over time. In all honesty, it’s likely that Apple would at least start out with leasing the cars so that upgrading would be possible. Again, Jobs would have wanted this product to be revolutionary in terms of the way vehicles were sold; you would be ‘subscribing to a transportation system’ and not ‘buying a car’. “What will it take for you to drive one of these Apple Cars off of the lot today?” would NEVER be asked at an Apple Car Store. 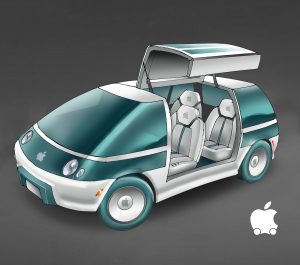 A fully translucent car would be a difficult thing to do, but then even the iMac was selective in what was actually see-through and what only seemed that way. I’m envisioning a white plastic-covered lower section on every one sold, with a bubble-shaped top featuring a lot of glass tinted in one of the available colors (darker tint in back or on the sides in states that allow it). Below the beltline, it looks like more color tinted windows continue down, but it’s a ruse: it’s just translucent material with opaque plastic an inch or so below the surface.

The tires are color-coordinated rubber, available only through your Apple dealer so it would be just like owning one of Steve Job’s computer products where you’re stuck with buying his expensive-ass proprietary shit. Essentially anything and everything on the car would be proprietary, so you just couldn’t go to AutoZone and find replacement parts, but you wouldn’t have to since an AppleCare service package would be mandatory.

This color coordinated rubber is also used on the front and rear bumpers. These would be the same piece used front and back; scuffs could theoretically be rubbed out. Ingress would be through gullwing doors, since every megalomaniac that makes their own car from Delorean to Bricklin to Elon HAS to have them- it’s some kind of unwritten law, like how the top left drawer in your kitchen legally needs to be filled with a dead flashlight and hex wrenches from your last IKEA builds.

Besides the G3 shape and materials, Apple would want a few other tricks on the car as well, and I found inspiration from an impressive toy by industrial designer Patrick Callelo called Automoblox. This wood and plastic toy is made of modular components to allow you to turn a coupe into a sedan, a truck, or a number of other vehicles:

It’s an idea that only the Nissan Pulsar NX ever offered in production car form, but Apple would do the same with changeable back sections that you could choose when purchasing the car or buy later to convert your vehicle. You bought the sedan model, but you just had baby twins: time for the van rear body component. Maybe your Apple dealer could even rent you a different back for the times you need it?

Inside, there’s four seats and the cargo area in back is complemented by a frunk under the windshield which is accessible by either and opening front panel or a front hatchback (haven’t decided yet): 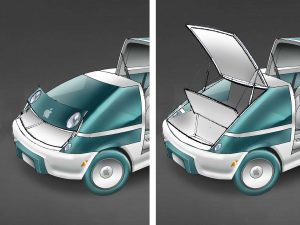 The dashboard is deep and has the gauges up front in your line of sight, while controls sit on a panel between the front seats. It’s an Apple product, of course, so forget your CDs and cassettes; there’s a recessed place to put your iPod in to play iTunes. Note the video screen that would only be visible to the passenger (but would likely only work when the car was not moving based on most state laws). Major controls are below the airbag on the steering wheel, and window and door controls flank the ‘gear shift’ buttons. Note the arrow push buttons to control air flow and temp of the HVAC. 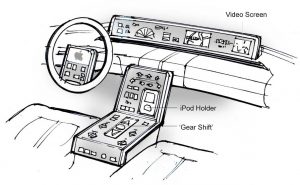 The ’key’ for the car would look very much like the hated hockey-puck mouse that came with earlier G3s- maybe Apple could even get more life out of the molding tool by using it for this purpose. A round charger that could be portable or mount to a wall bracket would also be needed for home or office. 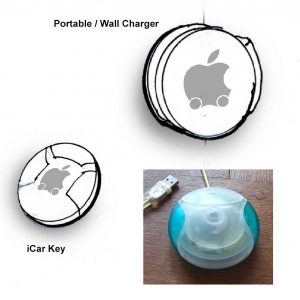 Speaking of the hockey puck mouse, the Apple Car would offer a ‘single pedal’ mode as an option for driving. Similar to hand controls for cars owned by paraplegics, releasing the gas pedal would apply brakes (or regenerative braking) depending on how much you lift your foot. It might be great for driving in traffic or other situations, and it would DEFINETELY be the kind of love-it-or-hate-it thing that Steve Jobs would go nuts for. Drive different, y’all.

As mentioned earlier, the buying process would be unique, and the cars would be offered through Apple ‘megastores’ that would combine computer equipment showrooms with the vehicle distributors, and even Apple Cafes at Megacenters. You belong to Steve now!

I do think that if such as car existed, there would have been superfans that would make Tesla Stans look like casual owners. Followers of the black turtleneck-clad messiah would flame anyone online that offered even the slightest criticism of their translucent candy colored machine. Maybe Elon wouldn’t have even tried to hit the market if Jobs had channeled his inner Henry Ford and we had a rainbow spectrum of tire smoke on our streets.

One last thing: had these been produced in 2001, I am hoping that today there would be derelict examples of iCars in each available color and every bodystyle moldering in front of Mercedes Streeter’s home.

Read All My Posts »
PrevPreviousWhat It Was Like Driving My Worn-Out 1966 Ford Mustang 2500 Miles From Detroit To Los Angeles
NextThe Autopian Is Headed To One Of The Largest RV Shows In America. Here’s What You Can ExpectNext