You’ve probably noticed that my what-if assignments from Torch have been fairly tame as of late.  Like in a horror flick or calm water facing black skies, this kind of peace merely means that shit is gonna get real very soon. So it came as no surprise when Jason popped up with this latest tortured vision for me to flesh out.

When a giant corporation takes on a task that is typically done by small industries, you can typically see advancements that would be unheard of from little manufacturers. The outstanding 1973-78 GMC Motorhome is a perfect example of something that tiny recreational vehicle makers didn’t have the capacity to do.  However, Torch wanted to know what would happen if it was the other way around. Say, a camper company wanted to make a car? He wasn’t talking about a car-sized camper; he meant just a regular car, with no motorhome aspirations at all.  Well, except that it might have had an optional toilet. Let me explain, or at least try to.

In the late seventies the market offerings for domestic subcompacts were pretty abysmal; other than the VW Golf ripoff Dodge Omni/Plymouth Horizon (which started with a carbureted Volkswagen motor, for chrissake) they were all archaic dogs. 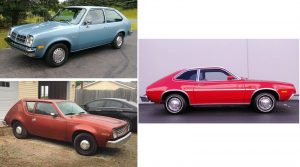 [Editor’s Note: While I’m perversely fond of the shitboxes The Bishop shows above, it’s worth noting that all of those were front engine/rear drive vehicles when imported compacts were turning to front engine/FWD, which does kinda back up his point. – JT]

At the same time, the first fuel crisis (and the looming second one) had spooked many camper makers as a harbinger of bad things to come for their business. What could they do to stay afloat in the dark times ahead?

One idea is that they could make their own car. Most recreational vehicle manufacturers had little to offer with their corrugated steel and wood construction expertise, but there was one manufacturer that had something different to expand on- Airstream. With their signature rounded shaped aluminum bodies, aircraft-style fabrication, timeless look, and ultra light weight construction, their products featured qualities painfully lacking in car production at the time. This is the manufacturer Mr. Torchinsky chose to create a new little car around 1978. Here are some seventies models of their iconic trailers:

My first thought was that this wasn’t going to be that bad of an assignment. I starting doing tiny, very rough scribbles during boring meetings of what seemed like Delorean-looking sedans in aluminum instead of stainless steel and figured I’d get this one out of the way in a flash. However, my ‘client’ had other plans. He was INSISTENT that this car follow Airstream’s construction and brand language. It was like when Homer Simpson walking into the studio in the episode where he designed the car. “No. No. NO!!! I want a LOAF OF BREAD SHAPE, MAN! That’s what Airstream is”. Sure, Jason, but the Airstream aesthetic works since it is the size of a small house, not the subcompact commuter car he was requesting.

I told you this was gonna get fun. 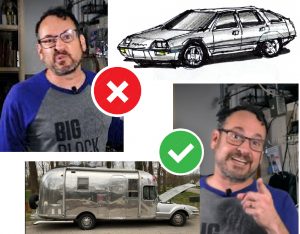 source: Jalopnik and The Bishop

Also, as a semi-plausible alternate reality, there’s other issues. I mean, how could a maker of primarily non-powered vehicles (other than Airstream’s Argosy Class A homes) actually procure car components? None of the big three or Japanese makers in 1978 would willingly sell parts to what might be a competitor. It would have to have been a company that stood little to no chance of peddling cars on these shores.

Enter Citroen. That’s right; if there is one car company that could match the innovation of Airstream it was this French firm. No, they wouldn’t use a pneumatic-suspensioned big Citroen or the ancient, dinky 2CV (as much as Jason wanted to, of course). The basis would be the new-for-1978 Citroen Visa, a modern subcompact with available four-cylinder power, about the size of a concurrent Civic. It’s also a car PSA group would never have sold here on their own (Citroen was owned by Peugeot at this point, who only marketed their bigger sedans as Volvo/Audi/Mercedes competitors in the US). 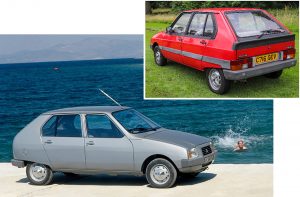 These Citroens could be shipped to Airstream sort of like the special version of the Visa you see below, with no body or doors aft the firewall, and even the hood and front fenders gone as well.  Essentially, it would be like how the Renault in the James Bond movie ended up. 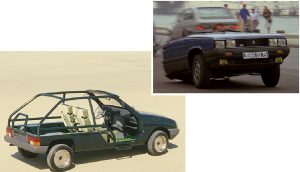 source: Lintermaute and Car and Classic

To this, Airstream would weld on a tubular frame to the back and make a signature aluminum body with four doors. Matching aluminum hood and fenders would go oved the Citroen nose and blend into the rear bodywork. Other than the Visa windshield and roll down front windows, the rest of the glass would be off-the-shelf Airstream components (including the skylight). Soft nose and bumper sections would take on the task of 5MPH bumpers, similar to what was done on the Delorean but here with the acceptance that color would never match the metal.

Sounds insane, and you haven’t even seen it yet. Presenting the 1978 Thumper by Airstream, a name chosen to complement the tiny Bambi mini-Airstream trailer camper. 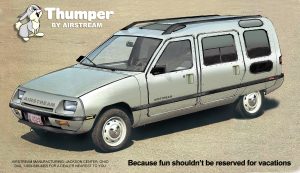 source: autoevolution , seekpng, and The Bishop

Seriously, I did the best that I could do, but at least the ‘client’ that I made this strange thing for seems pleased. Finishwise, I went more brushed aluminum than polished chrome, and I tried to tighten the radius of that bread-loaf back end to be more carlike.  I broke up the visual mass with a full perimeter rub strip like on the DMC-12 (and to protect from dents), and roof rails also try to ‘normalize’ the shape and add a sort of off-roader look as was done on the similar-in-concept car-based Matra Rancho. 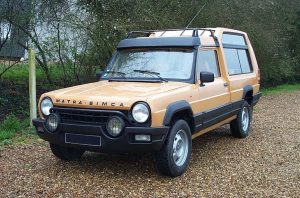 In back there is some real innovation in the shape of the VersaGate. This is a takeoff on an idea Torch also wanted to explore where a tailgate opens DOWN to create a ramp. However, by repositioning the hinge pins it could open in a traditional way as a standard tailgate. The tailgate also features an openable window to allow cargo access in tight spaces, and the window can also tip out for flow-through no-buffet ventilation when driving. 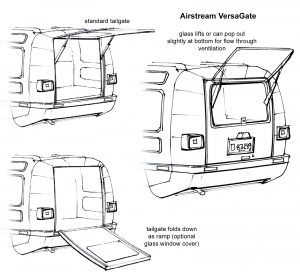 Inside the seats sit taller than a typical sedan, allowing for enough room underneath ostensibly for storage.  Storage, that is, unless your client is Torch. I mean, why not put a cassette toilet under one of the seats? Or both seats. You want them under the rear seats as well? Sure, and so sorry that your entire family is suffering from Crohns disease but at least you have the perfect car now. There is also the option of a small built-in cooler under one seat as well, as long as users don’t confuse the two. 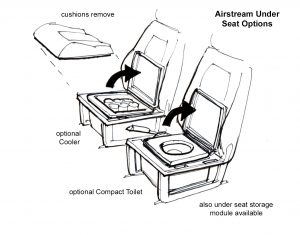 Had they built it the Thumper it would have been a pioneer in many ways, such as:

-Bare metal finish on a production car before DMC

-Dramatic super-roundy aero shape when the Audi 5000 was still a box and the Tempo/Taurus was not even a dream.

Still, many pioneers got scalped, and I think Airstream would have met the same fate with this funky looking thing.

Actually, based on the odd shape and wheels-with-three-lug-nuts mechanicals I have a sinking feeling that despite being ostensibly designed to take on the domestic market, the Thumper would have found its biggest audience in France. Vive L’Airstream!!

I mean, with Jason directing the design, are you at all surprised?

Read All My Posts »
PrevPreviousThe 2023 Ford Super Duty Has 1,200 Lb-Ft Of Torque In Case You Need To Tow A Moon
NextThe World’s Quirkiest Car Museum Takes Us On A Tour Of Turn Signals And TrafficatorsNext