Happy Monday, and welcome back to Shitbox Showdown! Today, we’re back to the back-row of the used car lot, after Friday’s trip upmarket. It was fun, but honestly, shiny cars aren’t as interesting to me, nor to you, from the sounds of it. And apparently, sometimes I don’t know shitbox from shiny-ola anyway. (Never rely on the Cliff’s Notes, kids). But for the sake of completeness, let’s take a look at the results:

You chose the Toyota Land Cruiser, which, if memory serves, means you have to take the low road through the valleys, but make sure to stop and grease the suspension after the river crossing, and then use the garlic to chase off the vampire bat in the gold mine (wait, that last one might be Zork). Anyway, when you’re done, turn to page four to start the speed race. [Editor’s Note: I have no idea what Mark is talking about, here. -DT] [Editor’s Note: I do. – JT]

Our search today takes us to a pair of old sedans from very different backgrounds, but with some striking similarities. Both started out as just ordinary family cars, but both spawned much cooler and higher-performance variants, and both had lifespans beyond their home countries (far, far beyond, in one case). And both have a propensity for rusting, which is evident in these photos. Let’s take a look. 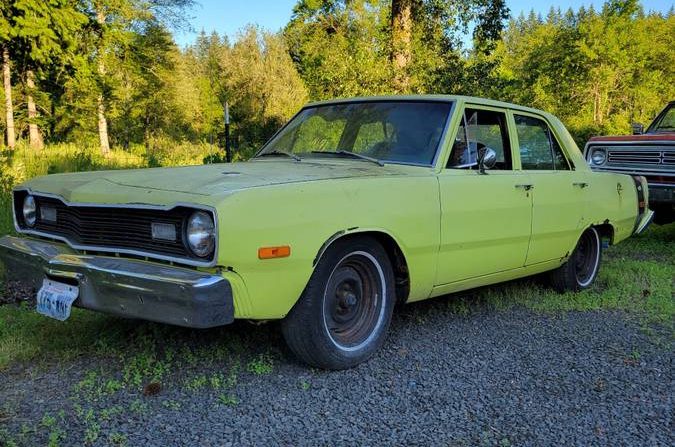 The Dodge Dart and Plymouth Valiant used to be as common a part of the landscape as Fotomats and K-Marts. Unlike those last two, Darts and Valiants seem to have survived the digital revolution in surprising numbers, and while they’re no longer common, you still see one once in a while, gamely soldiering on. Rust seems to be what ultimately does them in, and it’s well on its way to killing this one off. The seller says it has a specific set of heavy-duty bits on it that they were going to rob for another project that never materialized. 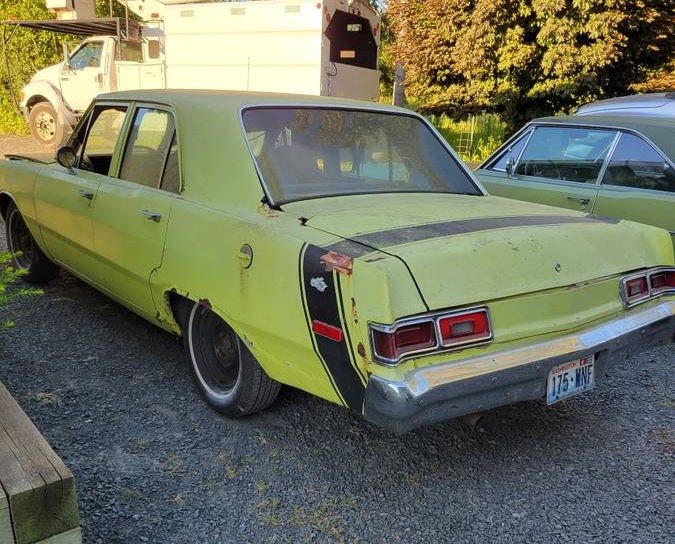 The seller calls this car a “Swinger,” but as far as I know, the Swinger models were all two-doors. That lurid green color and the bumblebee stripe around the tail look original, so it might be some sort of special version. Chrysler sold so many different special option packages that I doubt anyone can keep them all straight. Regardless, it’s a 4 door, it’s a V8, and it runs and drives, but it’s coming apart at the seams. 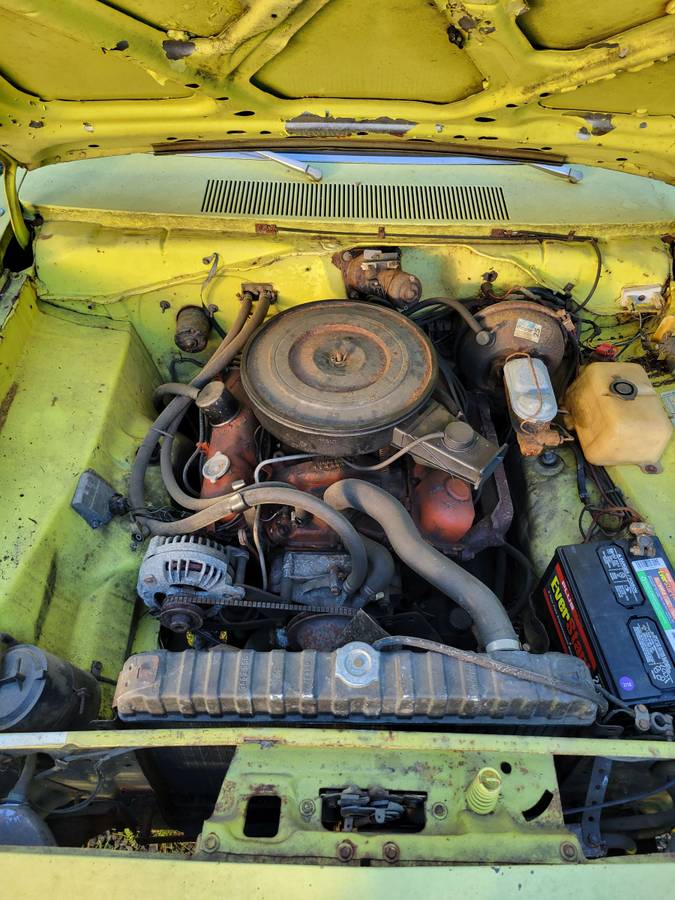 It’s probably not worth restoring, even if it is something special. By ’74, the bumpers had gotten huge and the great horsepower reduction was well underway. This car with a V8 isn’t fast; it just isn’t as dog-slow as the Slant Six. 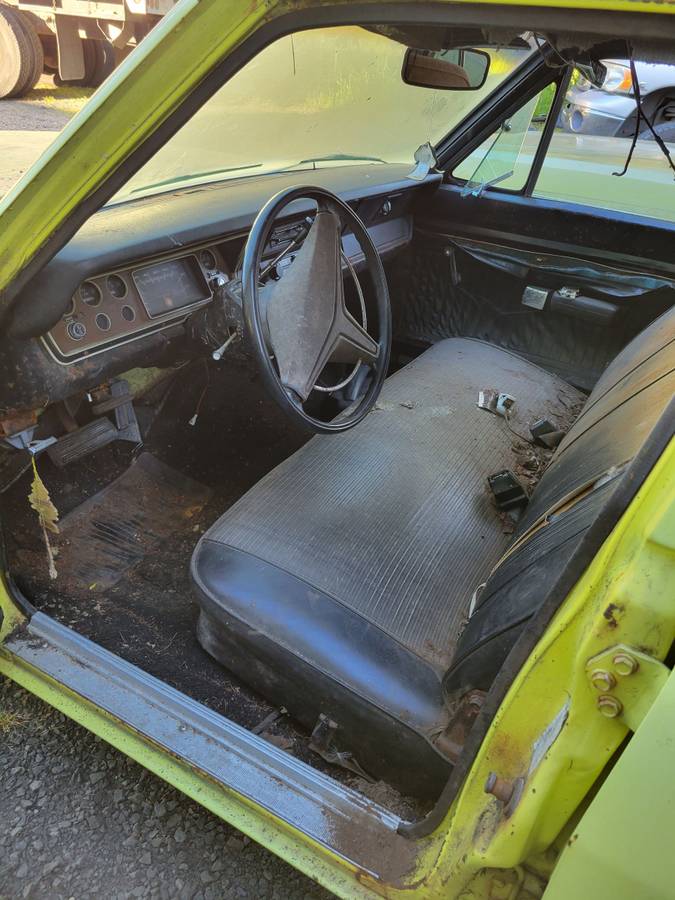 If you’re willing to clean up the nasty interior, you could make a case for driving it as-is until the rust starts compromising the structure. These things are built like tanks, unlike the Aspen/Volaré that replaced them in 1976. (Though you could still get a new Dart/Valiant under various names in South America until 1981.) And it is still a V8 Mopar with a stripe around the tail, for whatever that’s worth. 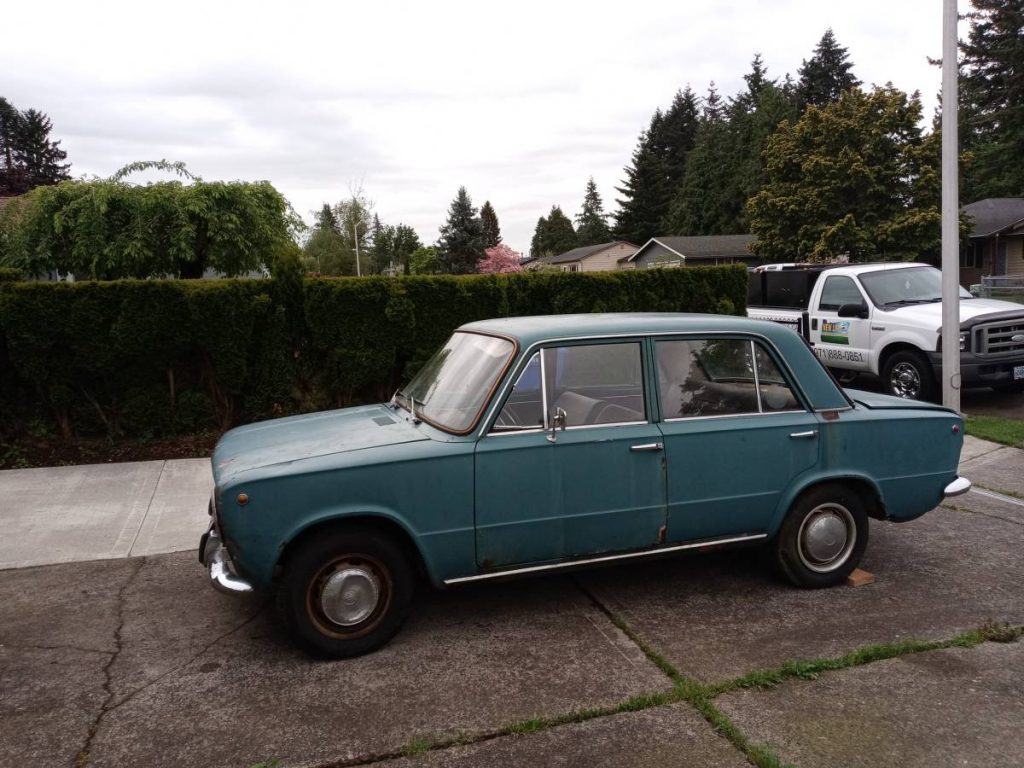 The seller’s reference to a VAZ/Lada 2101 in this car’s ad speaks volumes: the Fiat 124 was produced in far greater numbers in the Soviet Union than they ever were in Italy, upwards of 15 million total. But this particular 1968 model is indeed a Fiat, and an original US-market car, judging by the tacked-on side marker lights that would have been required starting in ’68. 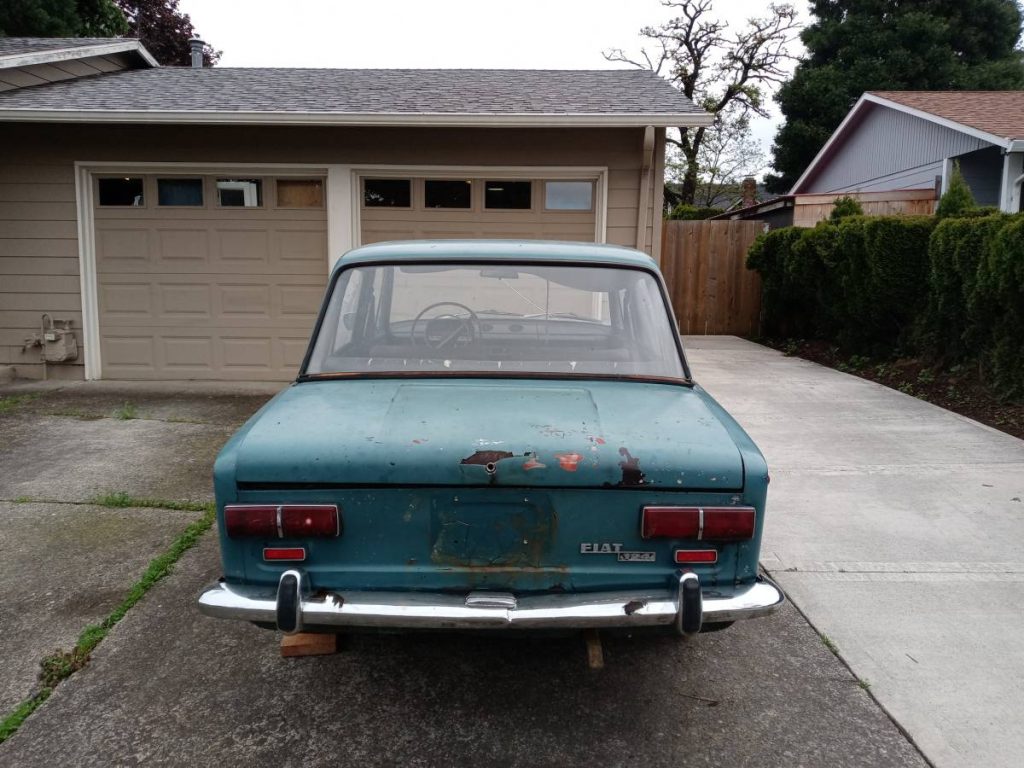 While this car may look like its more-famous Russian sibling, the 124 is its own machine under the skin. It’s powered by an 1197 cc overhead-valve engine; Ladas have their own overhead-cam engine. The Fiat also has 4 wheel disc brakes and a more sophisticated suspension, likely tuned more for Italy’s curvy mountain passes than for the mean potholed streets of Leningrad. 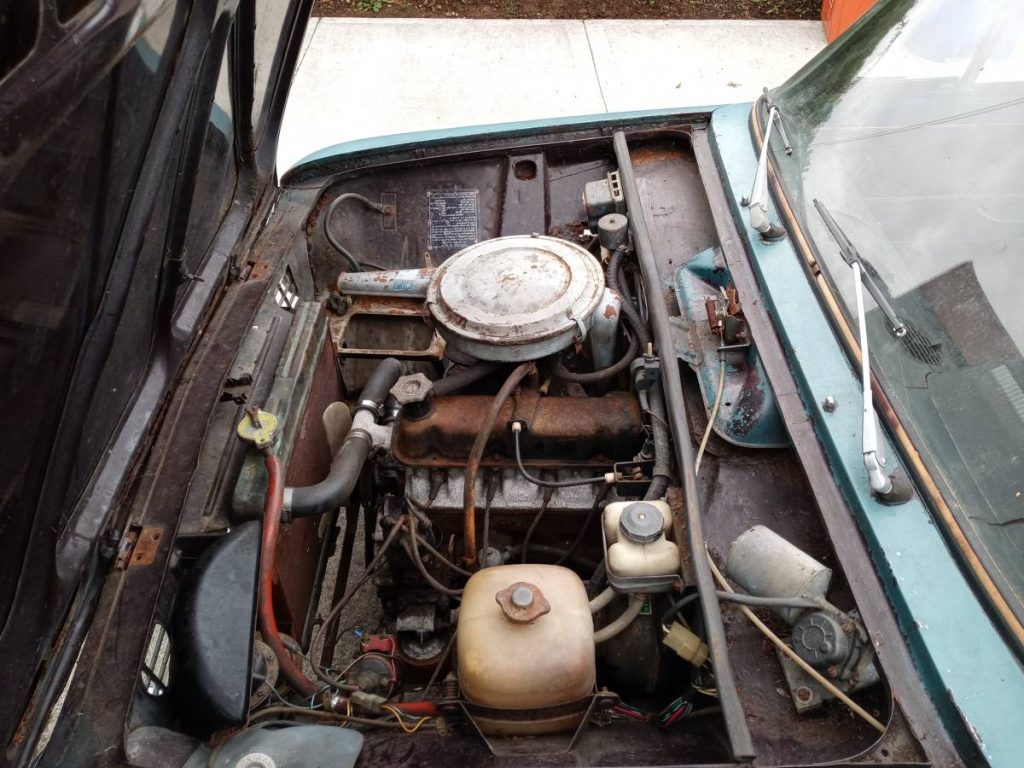 This little Fiat doesn’t run, the seller says, but a pushrod four-cylinder isn’t a complex engine, and old Fiats enjoy a wide enough fanbase that parts should be available to get it going again. (And failing that, later 124s were equipped with the famed Lampredi twin-cam engine, which should drop right in.) Like all old Fiats, it does have some rust on it, but I don’t see any gaping holes. And it’s such a charming, earnest little car that it wears its age well. If there’s no structural rust, I’d be tempted to leave it as-is. 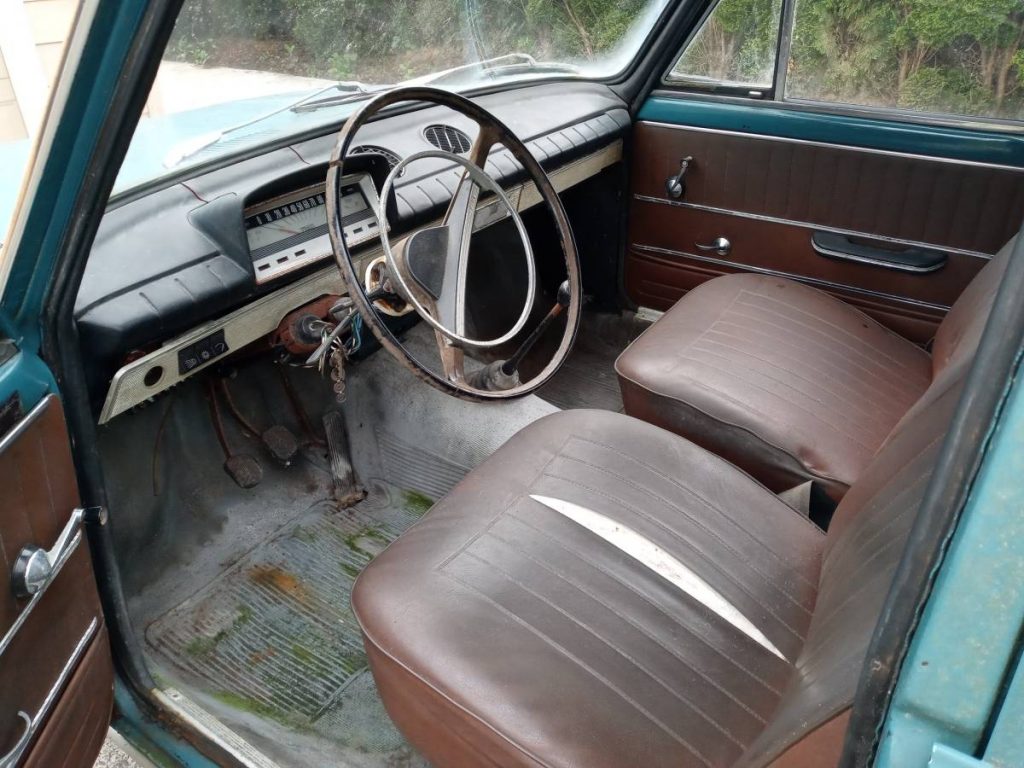 That earnest charm continues inside, and it’s not in terrible shape in there. And whatever happened to color combinations like turquoise blue with a brown interior? We need to bring this aesthetic back.

So that’s our choices for Monday: a decrepit Dart and a forgotten Fiat. Which one will it be?