A Strange And Uncommon Automotive Detail: The Nose Handle

I remember years – shit, decades – ago, when I was still a young collegian, full of collagen, I was walking with my friend Chris in a parking lot somewhere to my car, the same 1973 Beetle I have today. Chris looked at the car, and started to laugh. I asked him what the hell he was laughing about and he pointed to the car. “On the front, that’s…that’s just a handle.” Chris was pointing to the VW’s chrome hood handle, low and front and center right there on the hood, just above the bumper. Well, yeah, it’s a handle, that’s how you get the trunk open! So why did this strike Chris as so odd? Was he just an idiot? I mean, kinda, but that’s not really why. He had a point: Most cars don’t just have handles right on their noses.

This is one of those weird unspoken rules of auto design: prominent handles that you grab with your hand and pull are only allowed on doors or occasionally hatches or trunk lids or rear doors: never on the front. This rule was well-enough understood that even a non-car-interested normie like my friend Chris there clocked it, and when he actually finally did look at my car and saw it, it struck him as comical.

I mean, I suppose I generally understand why this is; auto design, at least since, say, the 1930s, has favored sleeker designs that shun something as utilitarian as a straight-up handle on the nose of a car. Big grilles and ornate hood ornament sculptures, sure, but a handle? Pfffft. What are we, animals?

This got me thinking about the cars that bravely violate the no-handles-on-your-face rule, and I only came up with a handful of cars. For an unspoken rule, it’s pretty religiously adhered to. Here’s the cars I can think of that aren’t afraid of a nose handle; it’s likely I’ve forgotten some examples, so if one springs to mind, please, tell me in the comments, so this page can become the go-to resource for Nose Handle Cars. 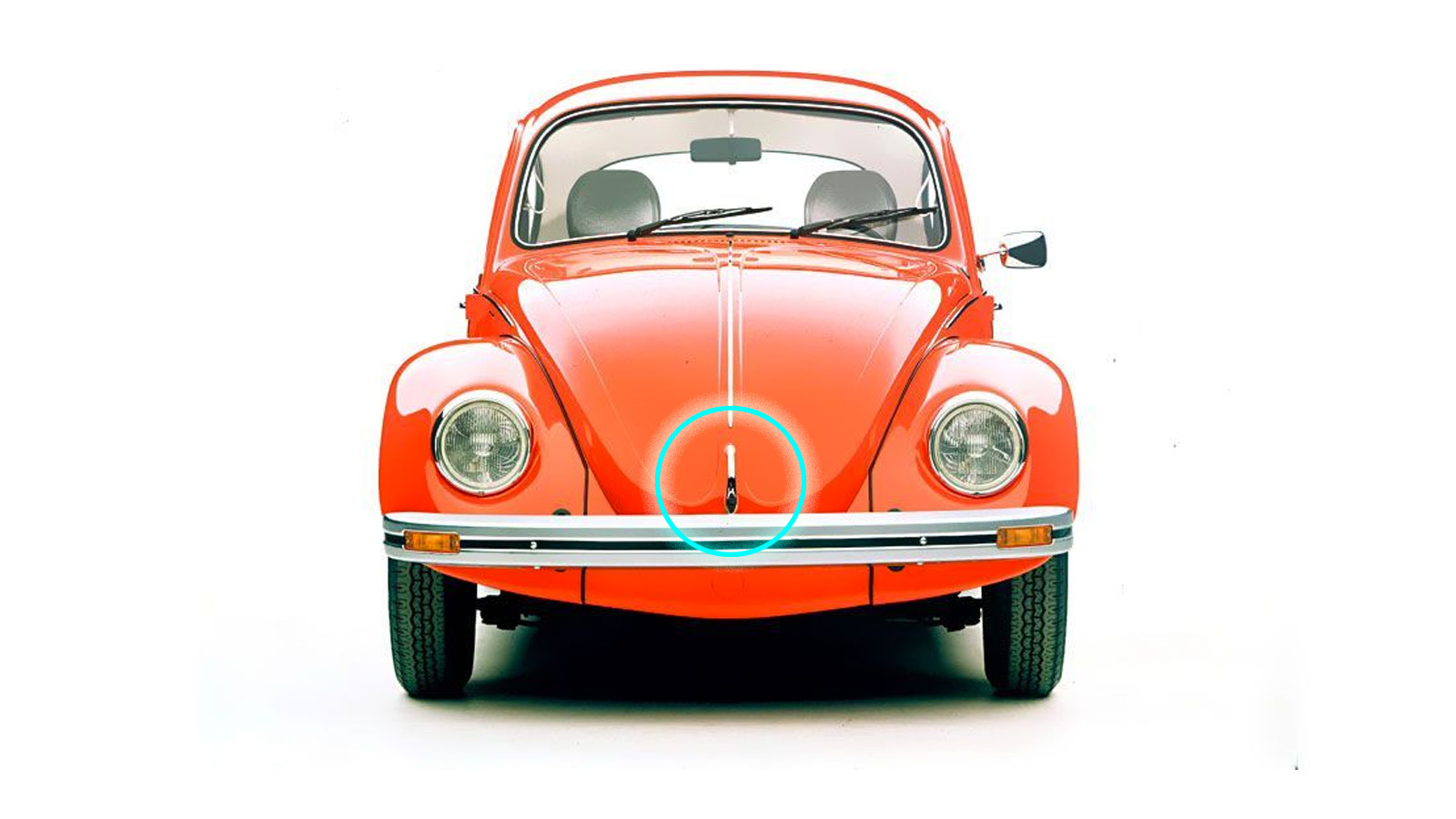 The Beetle has to be the best known and by far the most common car to flaunt the No Face Handles rule, and it’s been flaunting the rule throughout its life, at least in original, air-cooled form from 1938 (where it started as a little L-shaped handle before it turned into the familiar chrome parenthesis in 1949) all the way until production stopped in 2003.

It’s revealing about the power of The Rule that, with one exception, no other VW made use of a Nose Handle, not even the re-born New Beetle, which substituted the VW badge where the handle once lived. 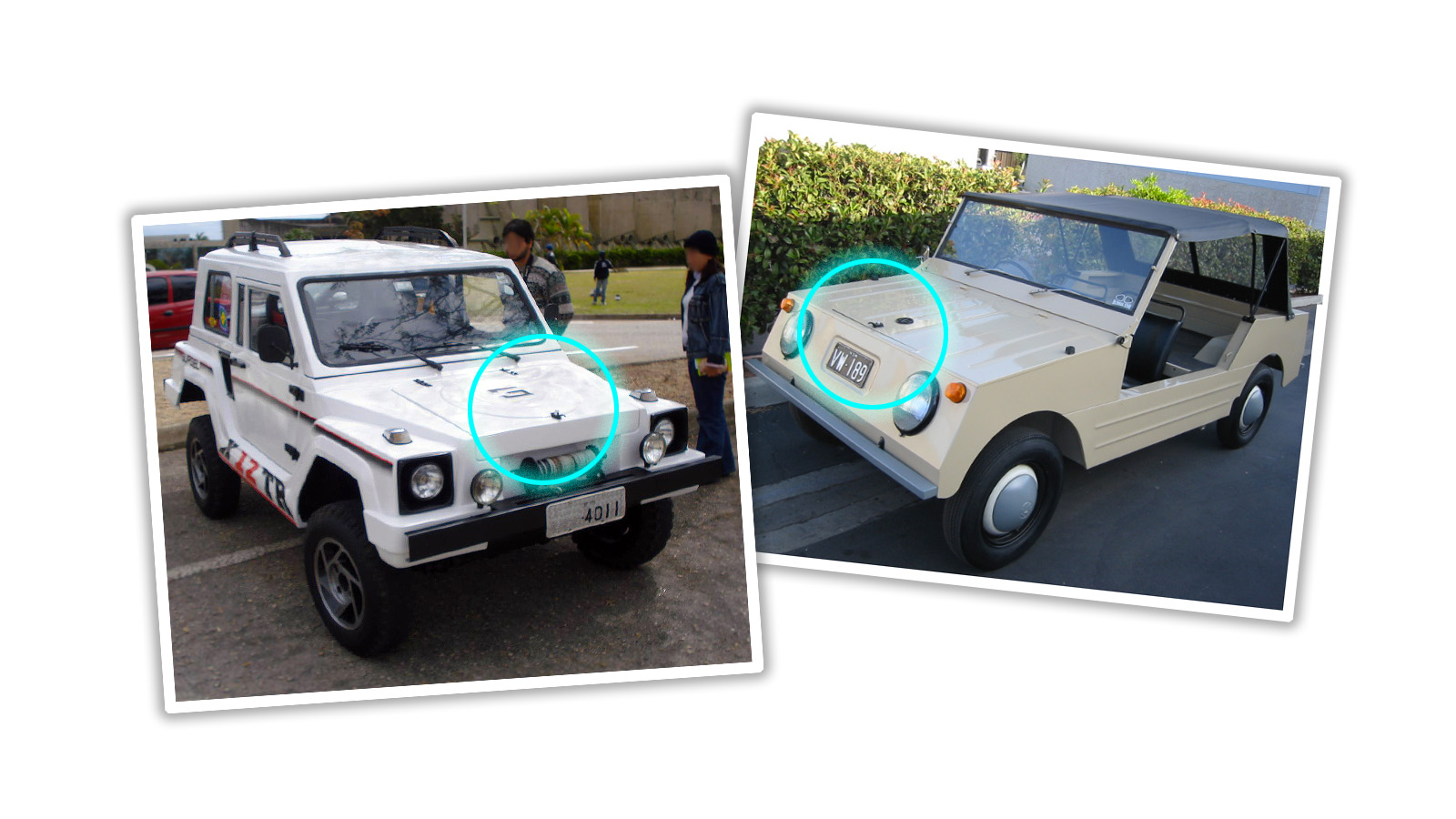 The one other VW to use a nose handle? The Australia-only VW Country Buggy, which I guess I’ll count as Nose Handler 1.5? Should it get its own entry? Maybe. Aw, crap, if we do the Country Buggy, then I guess we need to do the also VW-based Gurgel X12, which sported the same hood latch as the Country Buggy – a latch that was normally the Beetle and Bus’ engine lid (and, in the Bus’ case, hatch) latch. 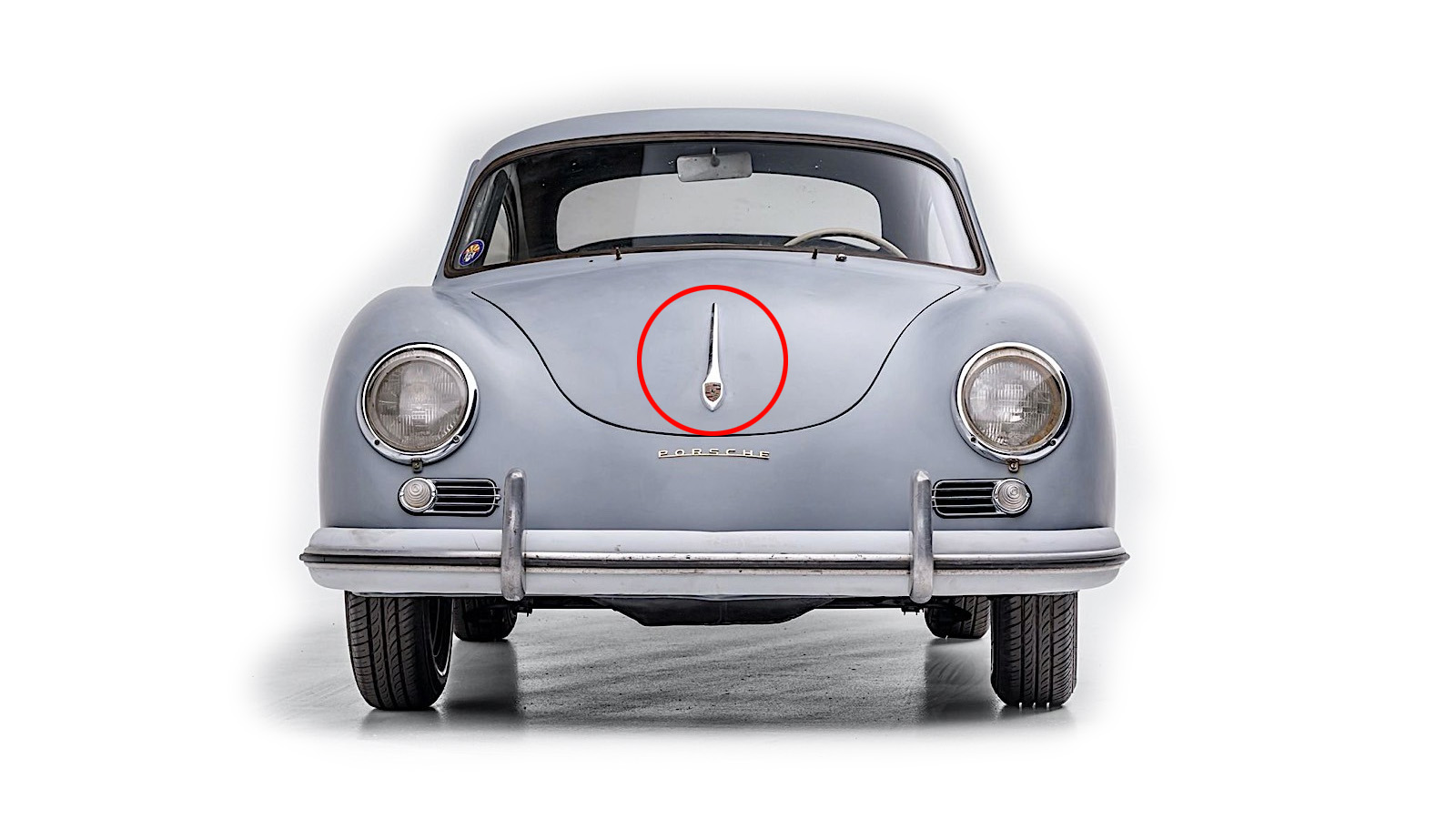 Also derived from the Beetle is our next entry, and possibly the most valuable and desired of all the Nose Handle cars: the Porsche 356. The 356’s nose handle is much more streamlined than most, almost passing as a hood ornament, but it’s very much a handle, which you can check if you don’t believe me, because that’s how these are sold as parts: 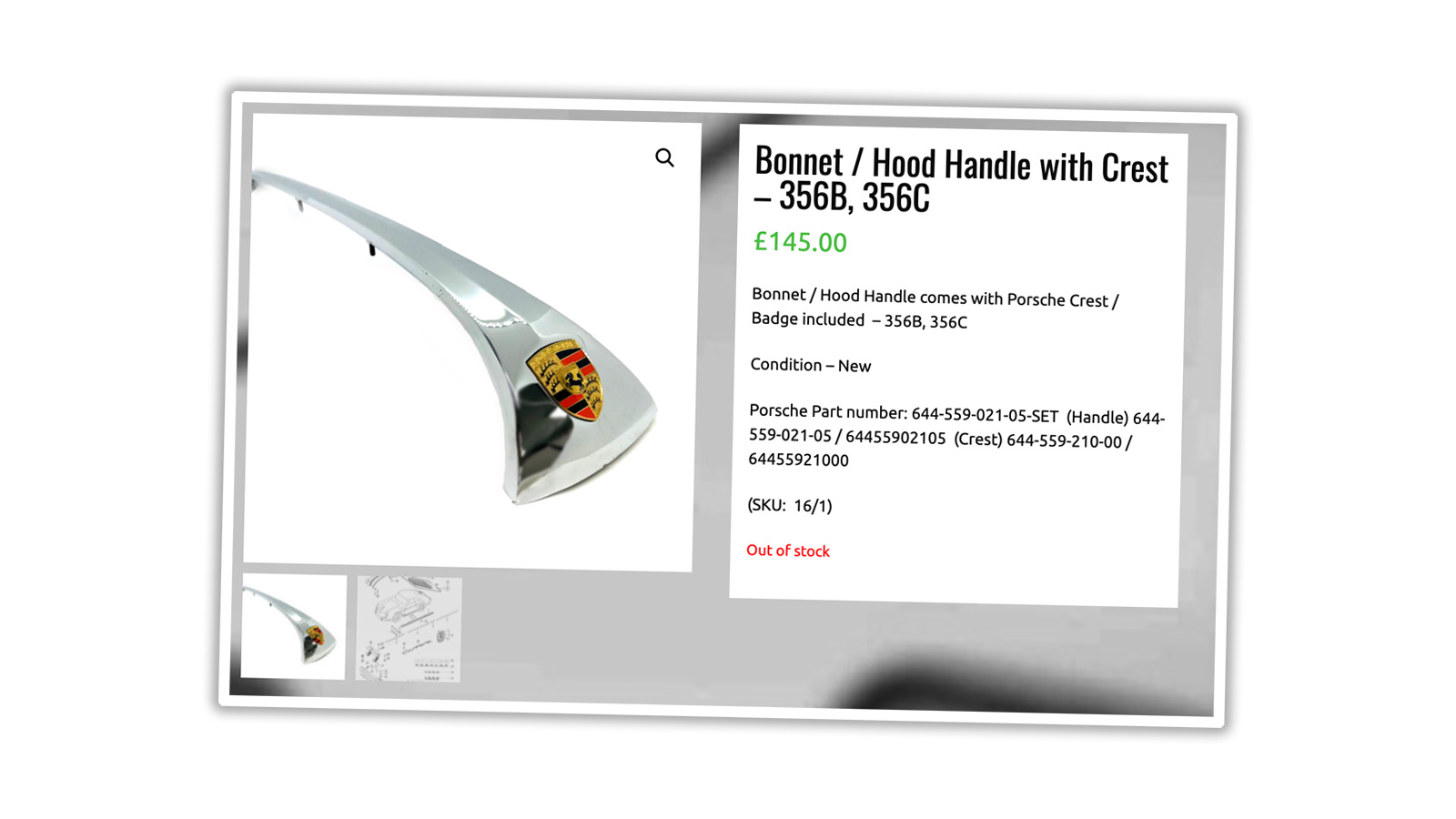 That’s a handle, all right. 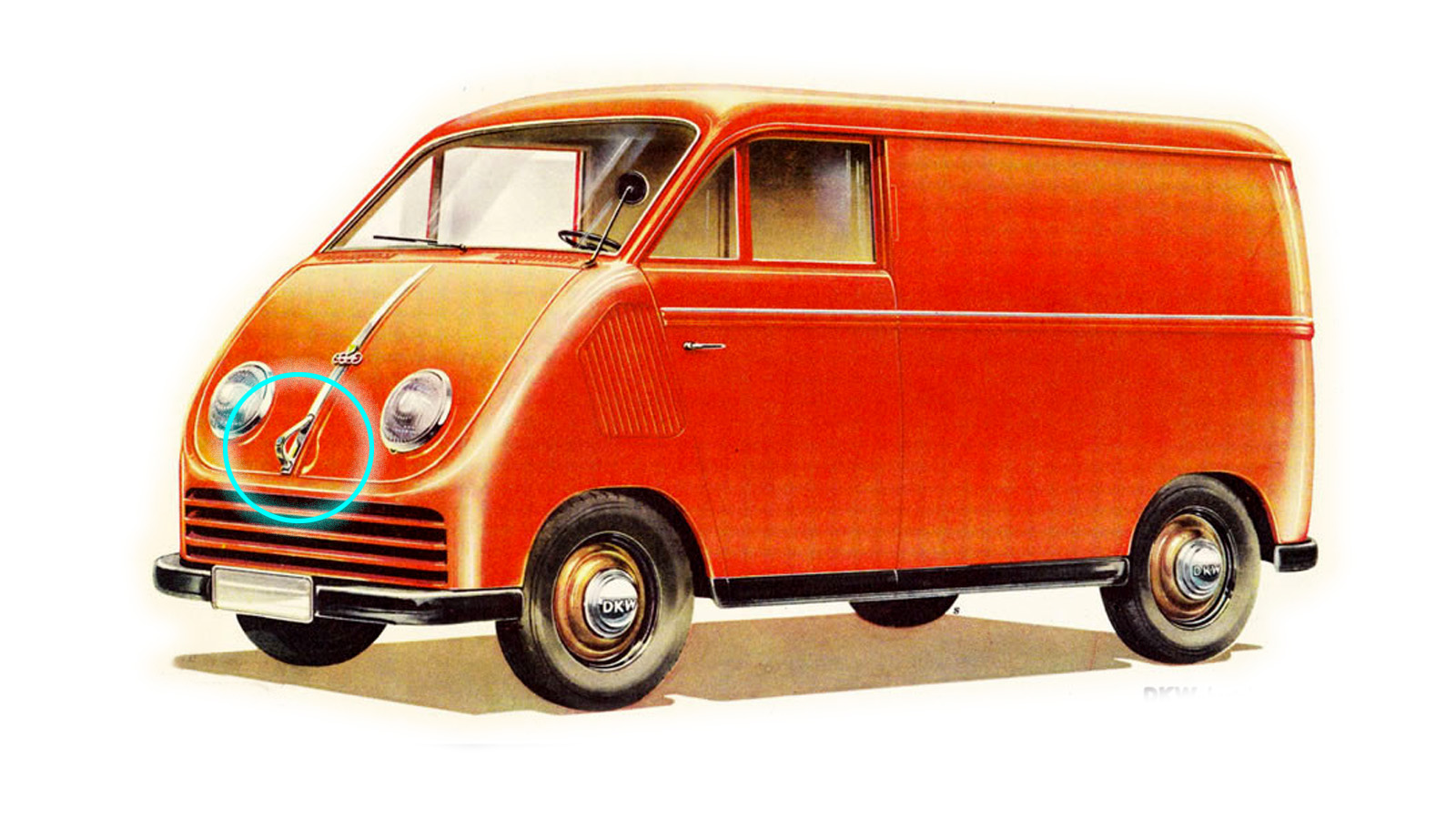 I think this is the only van member of the Nose Handler Club, but boy is it a nice prominent one. That handle opened the hood for engine access, which, interestingly, also caused the headlight outer lenses to rise with the hood: 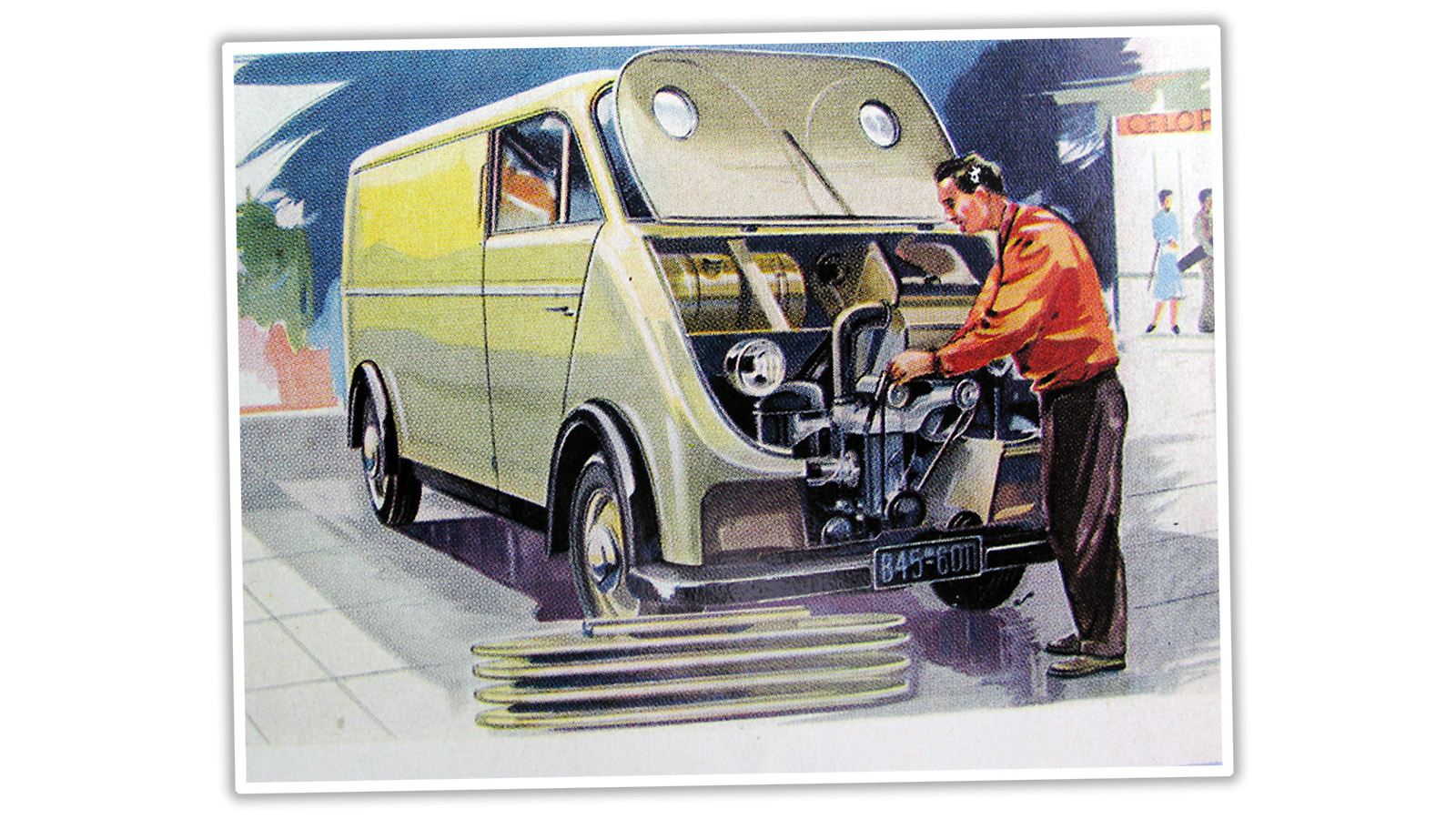 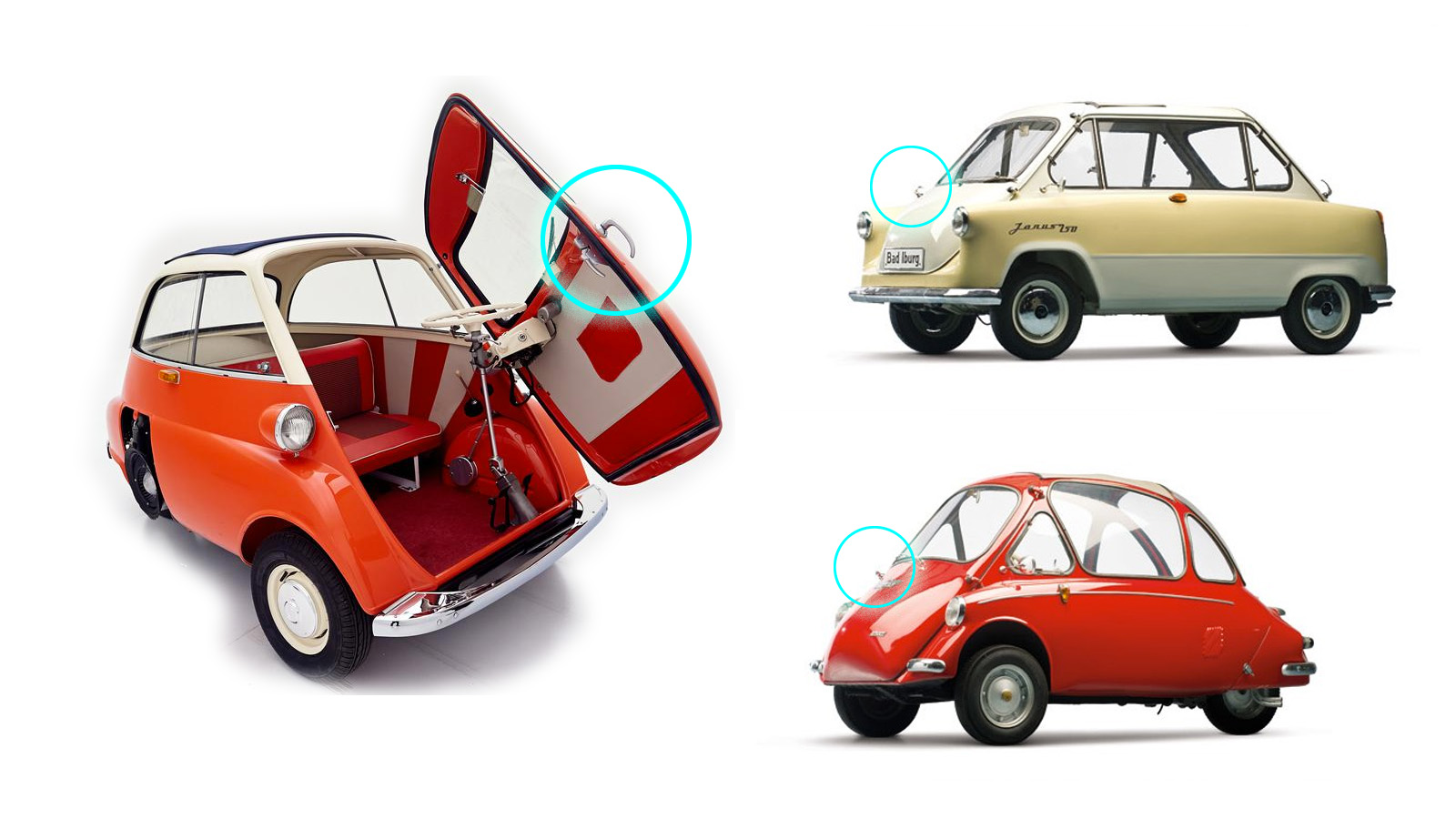 This is another sub-category of Nose Handlers, because all of these are cars with a door in the front, necessitating a handle of some kind. Interestingly, the lone modern entry into this category, the Microlino Isetta-inspired EV, seems to have made an attempt to meet the No Face Handle Rule and its door handle appears to be hidden: 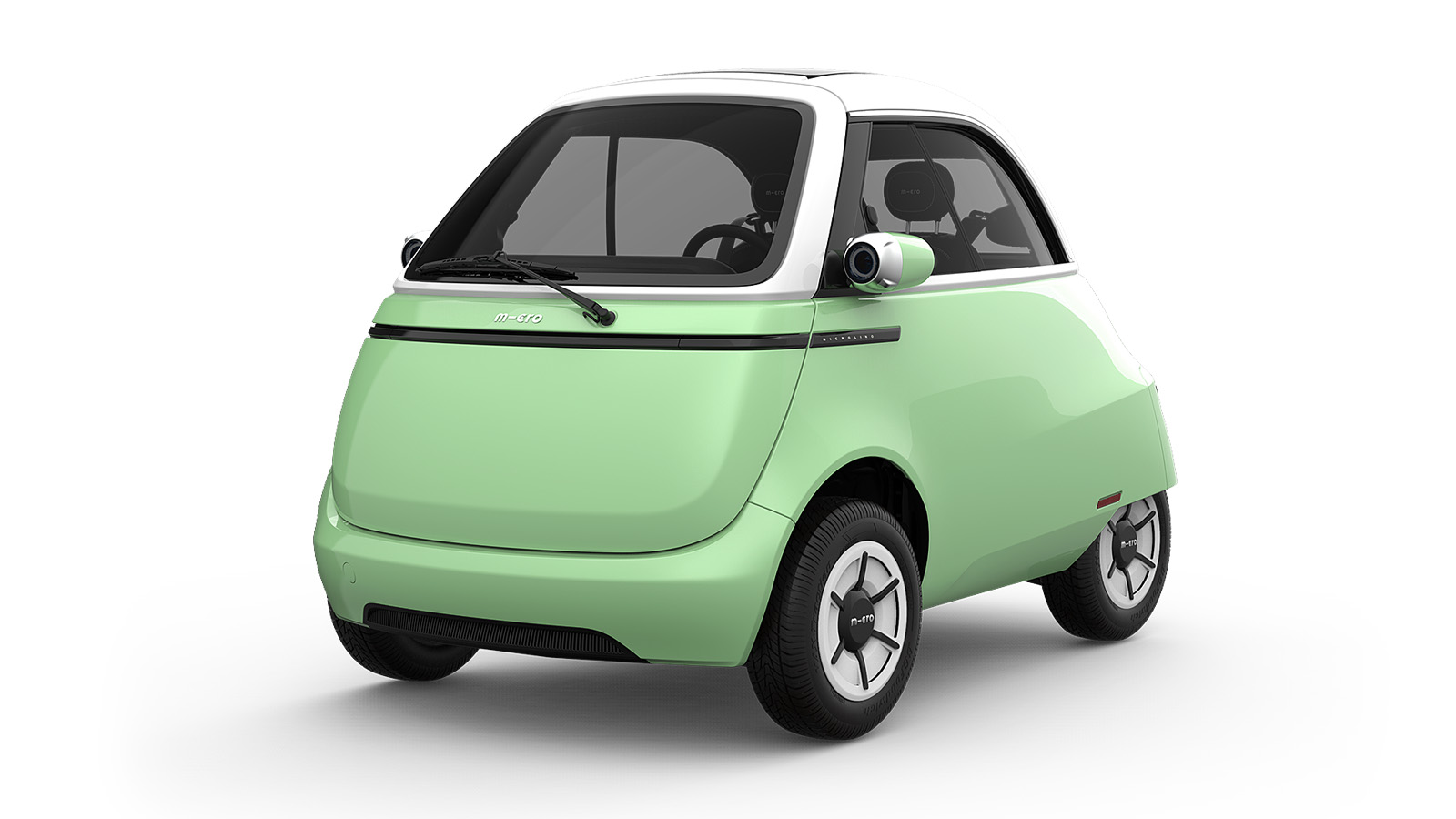 I think they could have gotten away with a visible handle, if they had the ‘nads to try. 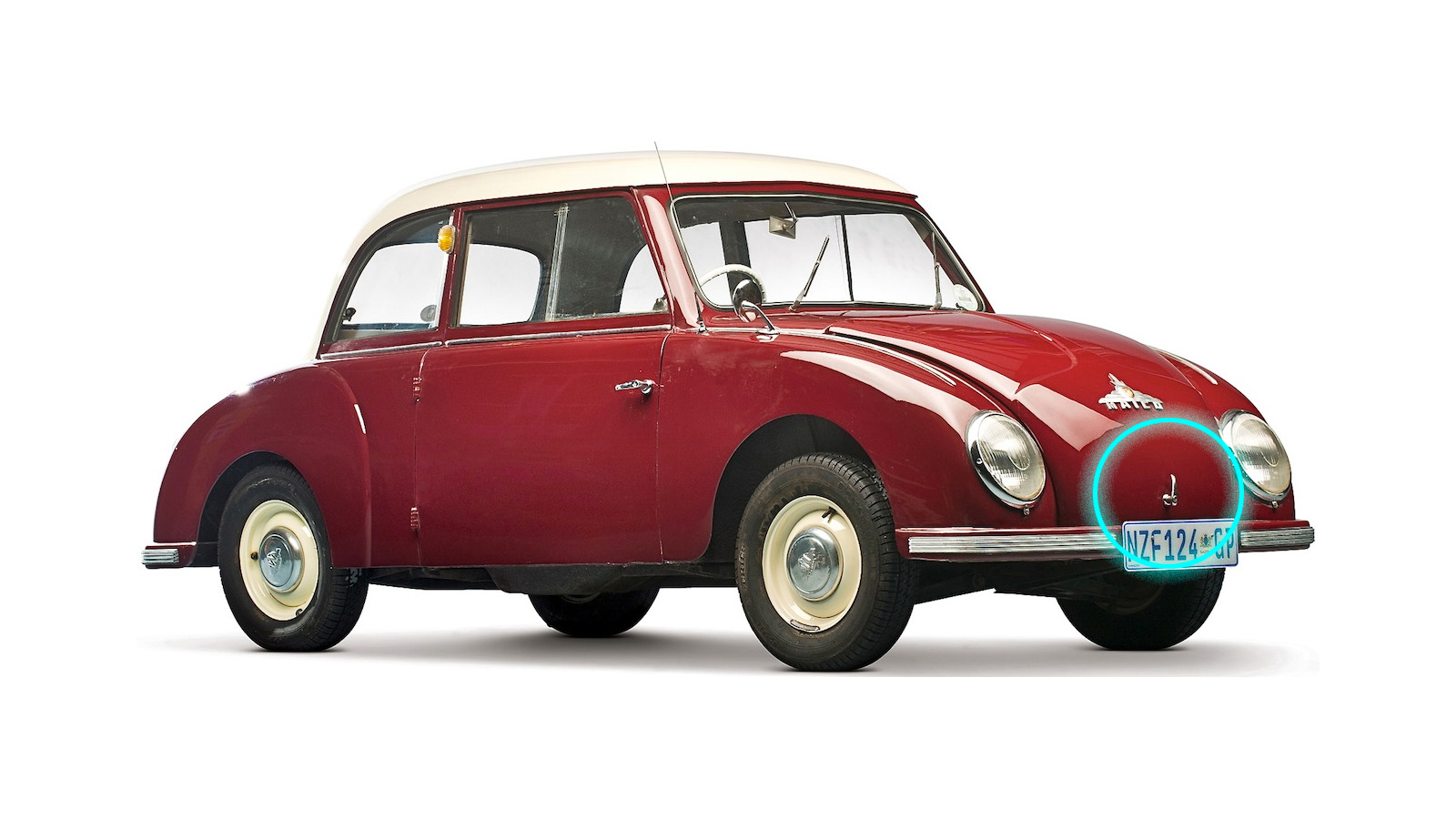 In the early 1950s, German motorcycle builder Champion tried their hand at building a small car, hoping to help fill the huge postwar demand for small, inexpensive cars. In 1955, Maico, another motorcycle maker, took over building the cars, which were designed on a somewhat VW-like model, which, to be fair, was a popular approach to small cars of the era: rear-engined, streamlined, backbone chassis, that sort of thing. 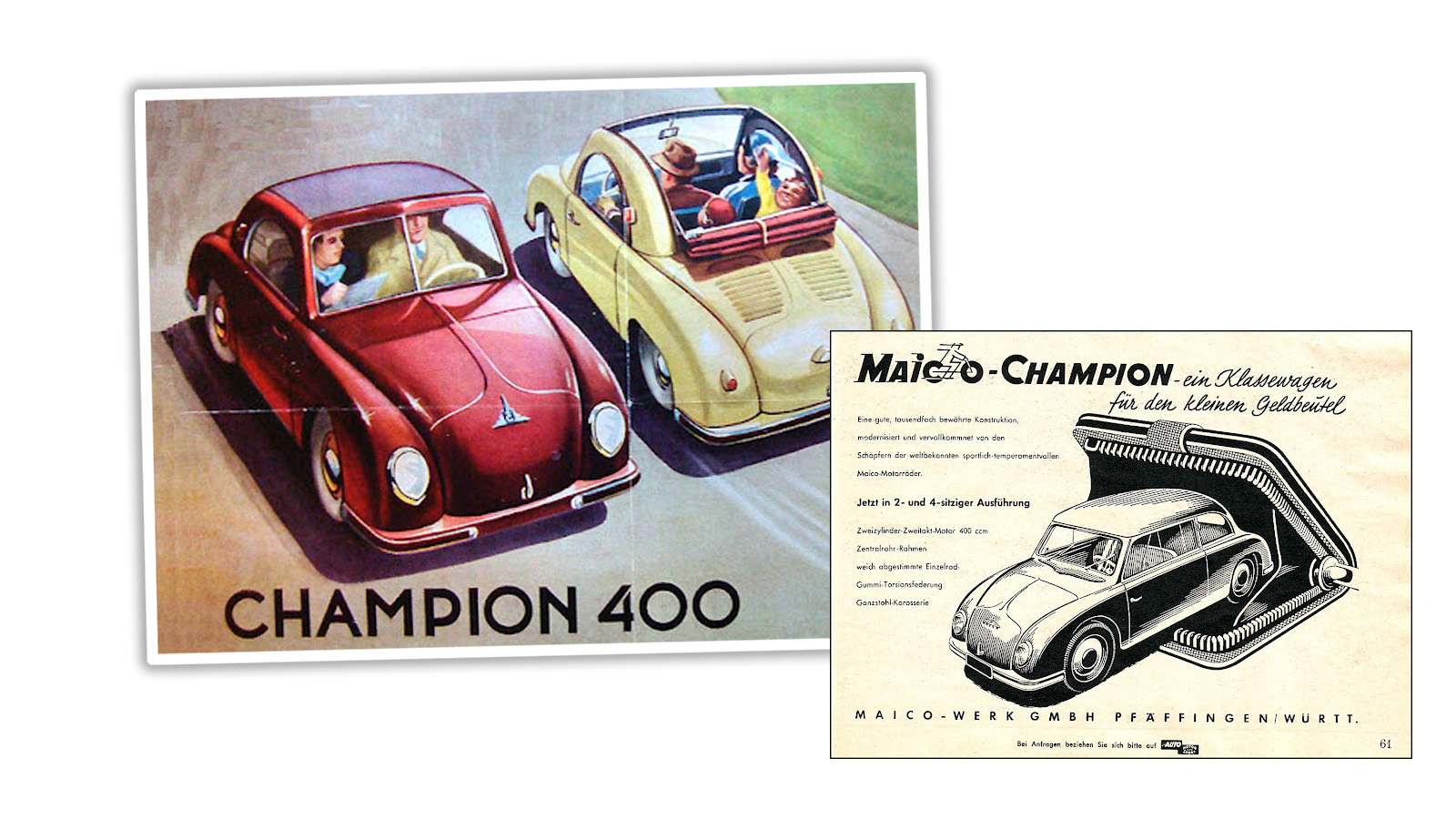 Like the VW, the front luggage compartment could be accessed via a simple, prominent, unashamed handle, in roughly the same location as on a Beetle.

You know, I’m also noticing that the Nose Handlers seem to have a favorite headlamp provider: the VW, Porsche, DKW, and Maico all use those distinctive double-glass Bosch/Hella headlight units. 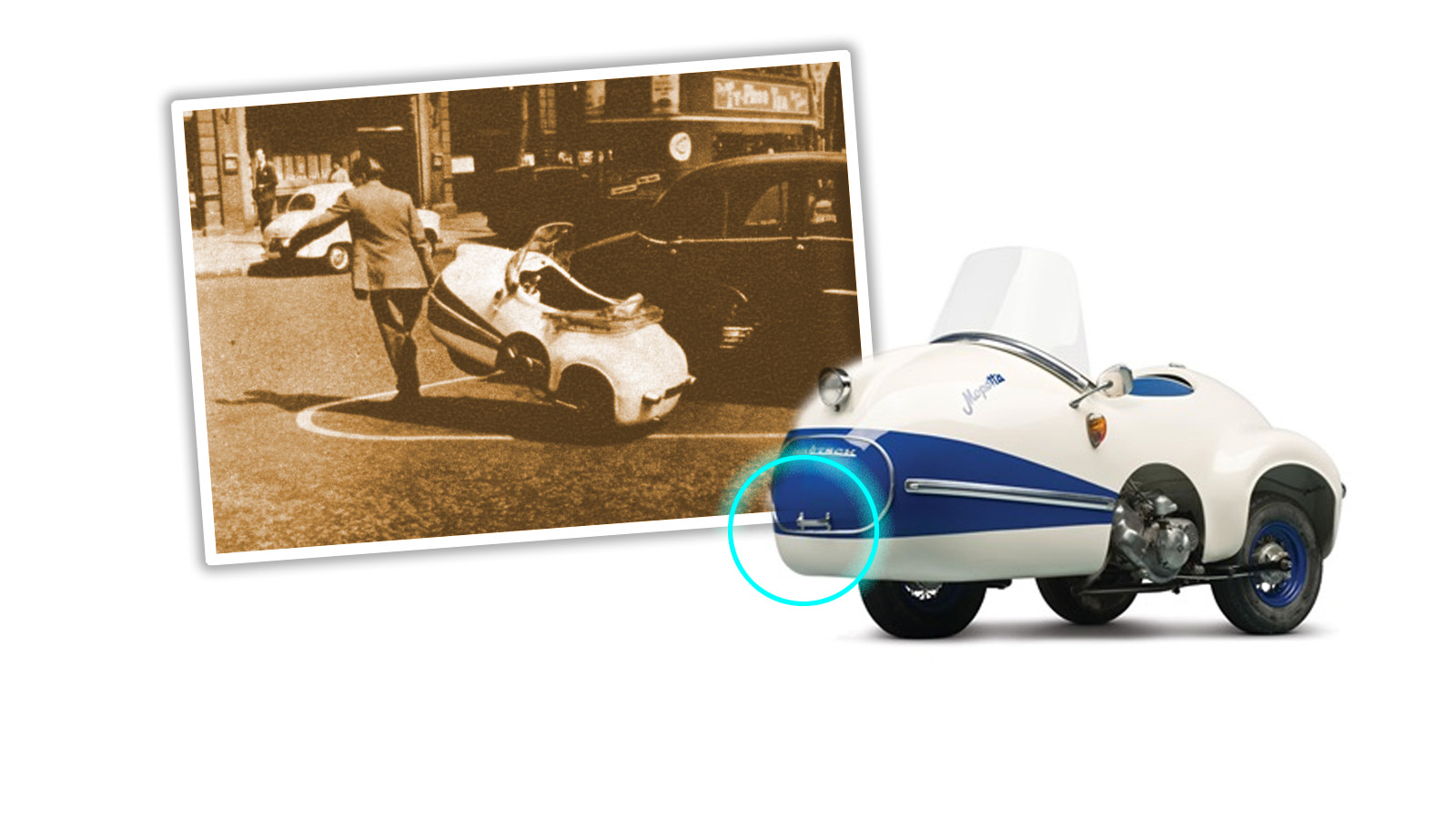 This last one is unique in that it’s the only time I can think of where the Nose Handle is not used to open a door or hood, but instead is used to drag an entire car around. That’s because the car, the Brutsch Mopetta, is so tiny it was designed to be lifted by that handle and moved around for parking or storage or just, you know, hijinx.

Only about 14 Mopettas were built by Brutsch, and only four are known to survive today. My Autopian partner Beau has one so we’ll get a whole video about this thing as soon as we can.

I think that’s all the Nose Handlers I can come up with, but I wouldn’t be surprised to learn of more, so, please, if I’ve missed one, don’t be shy. I’m not sure how I feel about this no Face Handles rule in general, though; I think there’s a place for a good handle right up front, sometimes, and I challenge car designers to boldly push back against this sort of arbitrary rule.

I'm a co-founder of the Autopian, the site you're on RIGHT NOW! I'm here to talk to you about taillights until you cry and beg me to stop, which I absolutely will not. Sorry. Hug? Also, David's friend.
Read All My Posts »
PrevPreviousA Bunch Of NAFO Anti-Russian Memelords Have Given The Ukrainian Army A Fleet Of Real Technicals
NextCoffee Machines, Gazebos, And Valve Cover Gaskets: Welcome To Canadian TireNext