Imagine a place where you can buy a set of Michelin Pilot Sport Cup 2s, a reciprocating saw, bath towels, a wok, a gazebo, a gun, and a full tank of gasoline. Sounds violently American, right? What if I told you that this store exists in just about every Canadian town. Welcome to Canadian Tire; what are you looking for today?

Here’s a brief explainer of Canada’s most iconic retailer for non-Canadians and Matt Hardigree, who posted this lovely message in our Slack chat earlier today. 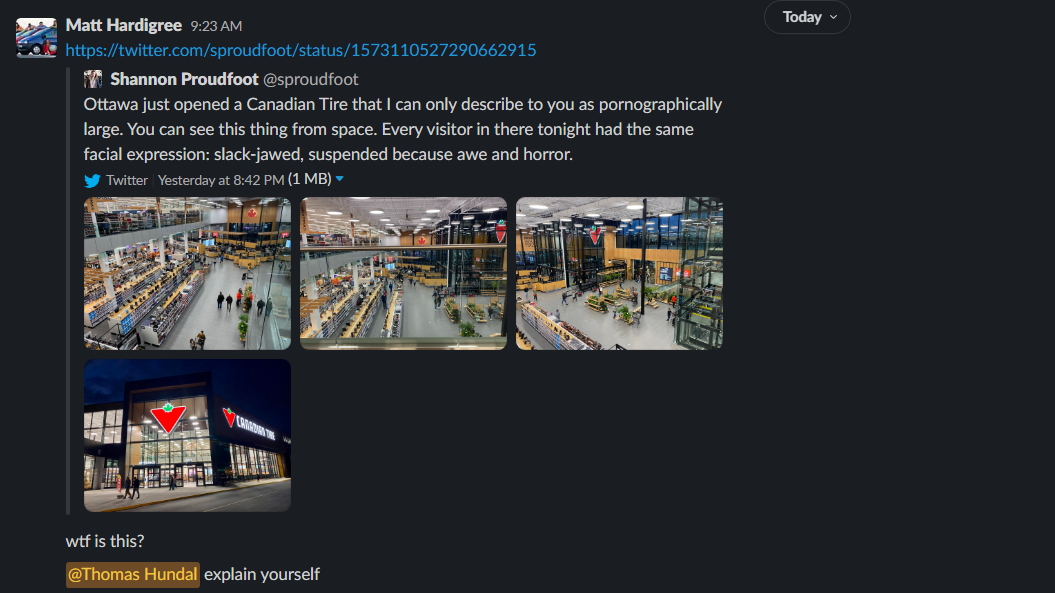 Why certainly, Matt. In 1922, brothers Alfred Jackson Billes and William Billes pooled their savings of $1,800 and bought Hamilton Tire and Garage Ltd., located at the corner of Gerrard and Hamilton streets in Toronto. That’s just east of the Don Valley Parkway before Broadview if you’re semi-local. However, that location and name didn’t last long. The very next year, the Billes brothers moved shop to the corner of Yonge and Gould, and rebranded as Canadian Tire Corporation. Thus, a legend was born.

Through public listing, associate stores, expansions, acquisitions, Canadian Tire developed an unshakable grip on the Canadian public. It became the go-to store for everything that wasn’t food or building materials — a fairly impressive feat. Today, Canadian Tire focuses on four main categories of products: Driving, living, playing, and fixing. Sounds like many of us, come to think of it.

Canadian Tire is the greatest store for a young Canadian gearhead because not only will your parents shop there all the time, but you’ll be surrounded by tires, paint, filters, fluids, you name it. Broke your high school shitbox by “driving gently, mum”? Just tag along with your parents, pick up a tensioner, control arm, or exhaust system, and you’re back in business.

As a bonus, you can also pick up all the tools you need to install your recently-acquired parts on-site. Canadian Tire has its own house brand tools under several lines depending on your budget. There’s Mastercraft if you’re Jesse F. Keeler, and MAXIMUM in all-caps if you’re a fully-fledged ASE-certified master lube tech. I’m kidding, the Mastercraft and MAXIMUM tools are pretty good stuff, often sold for a substantial discount and generally tough enough to last for generations.

Of course, it’s impossible to talk about Canadian Tire without mentioning its fake money that’s sort-of real money. See, Canadian Tire came up with this completely physical, entirely transferable customer reward program consisting of little notes for five cents, ten cents, 25 cents, etc. At one point in time, I swear every Canadian household had a stack of Canadian Tire money in a kitchen drawer. However, because Canadian Tire money was transferable, some small businesses accepted it as payment because they could also buy things from Canadian Tire. No joke, I once legitimately bought poutine using Canadian Tire money. Try doing that with your Kohl’s cash. HuffPost even reports that Moody’s classified Canadian Tire money as “sub-fiat” currency back in 2014. In addition to semi-fake money, Canadian Tire also offers financial services. While store-branded credit cards are quite common in the retail sector, how many big retail stores offer disability insurance and high-interest savings accounts? 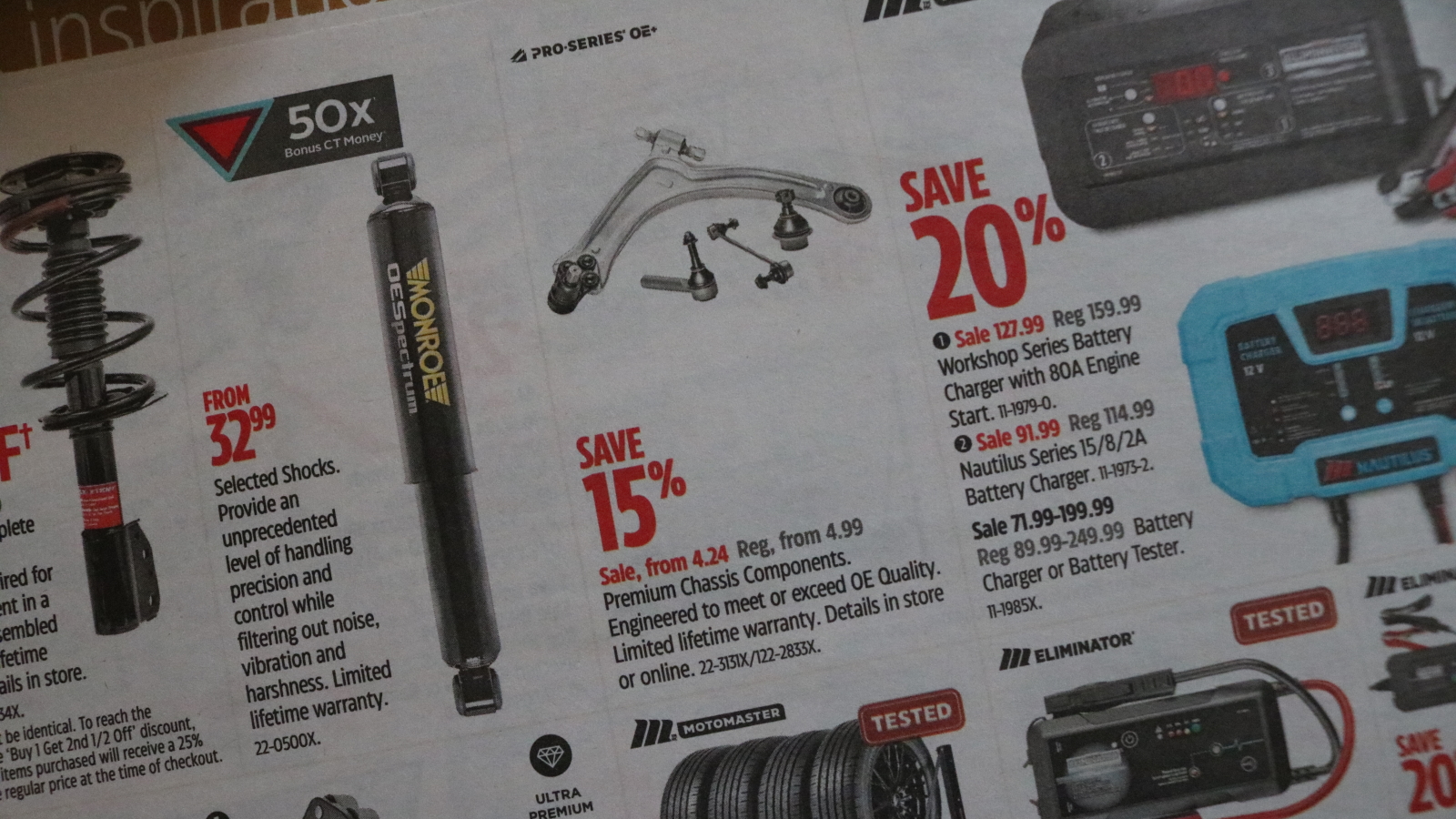 Let’s circle back to car stuff for a second. While nowhere near as fully-stocked as certain dedicated automotive retailers, Canadian Tire never forgot where it came from, so the automotive department is pretty well-stocked. There’s normally a whole aisle dedicated to exhaust tubing, with application-specific stuff from brands like Walker and Magnaflow available to order. Perfect for uncorking your GMT900 to become the most attractive person in Welland, Ontario. Somewhat obscure maintenance items are also often on deck, like Mann filters for German cars, Pentosin CHF-11S hydraulic fluid, and certain Motul motorcycle oils. For more regular maintenance items, Canadian Tire even has its own lines of automotive products, Certified for the cheapies, Motomaster for the better stuff, and Simoniz for detailing products.

While many retailers are perfectly content to use lowest-bidder white label bits as their house brands, it seems like Canadian Tire actually gives half a shit. I once had a set of Motomaster AWIIs that rode quietly and had solid wet weather performance for the price. Sure, the sidewalls had a ton of flex, but considering how cheap they were, I can’t really complain. It’s a similar deal with many Simoniz cleaning products, I use the multi-purpose cleaner on everything because it’s cheap and seems nigh-on identical to products like Bocar’s degreaser.

In case this isn’t Canadian enough for you yet, let’s bring winter into this. Unsurprisingly, it gets arse-freezingly cold in certain parts of Canada. Up in Thunder Bay, Ontario, it’s not uncommon to see average January lows of 20 degrees Celsius below freezing, or minus four in freedom units. So what did Canadian Tire do to showcase its line of AGM batteries? It hired Iceculture to build a truck out of ice. The Exeter Times-Advocate reports that a three-quarter-ton GM truck was stripped down to the frame and drivetrain and had simplified electrics fitted before an ice body was plopped on top and the necessary steering column and pedals were re-fitted. The result was a fully-driveable truck with a body made of ice. 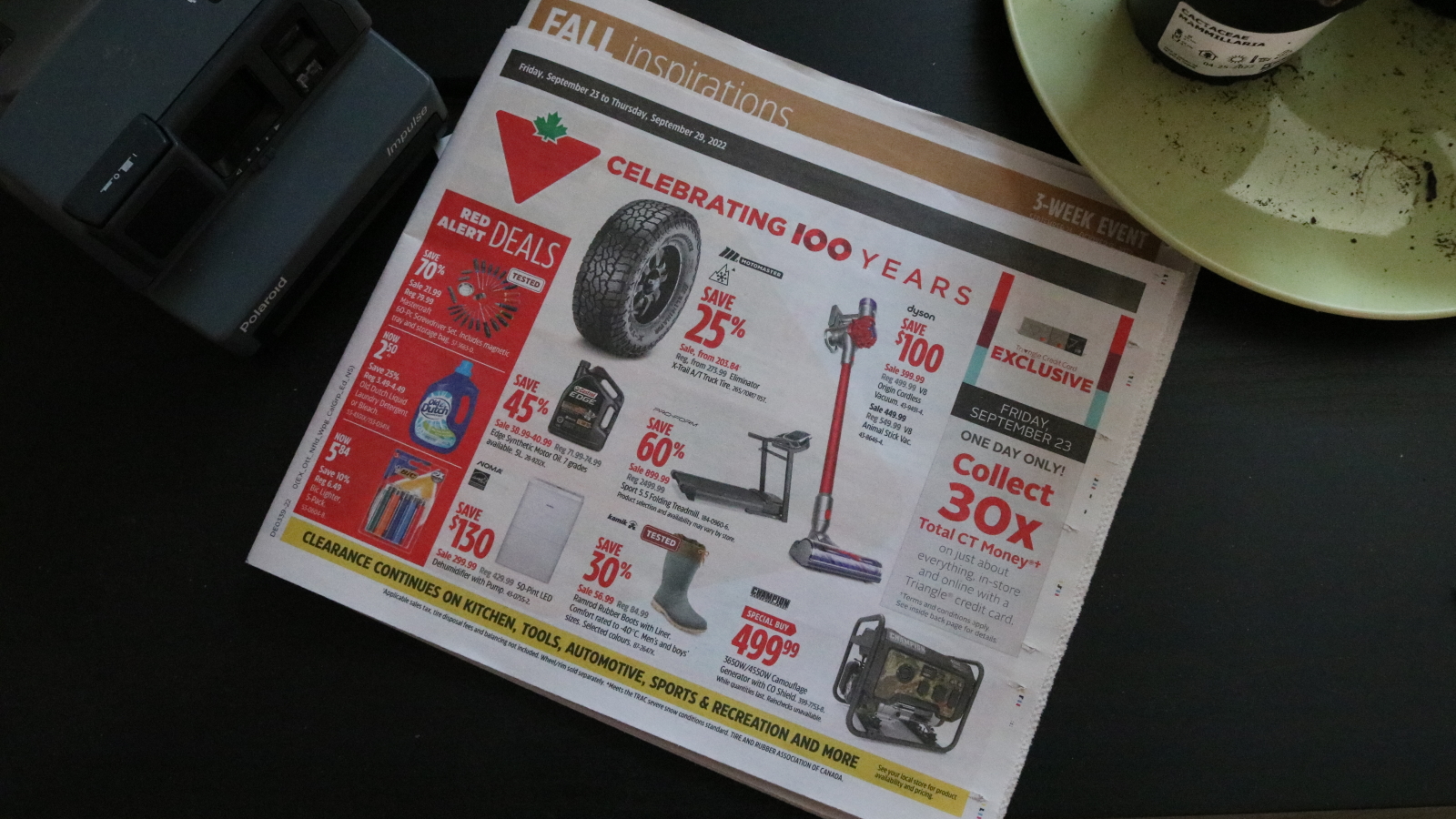 While most of us would make a beeline to either the automotive or tool sections should we pop into a Canadian Tire, there’s so much more on offer than just garage stuff. Want a coffee machine for the office? No problem. Heading out to the bush to hunt deer? Swing by and pick up some .223 rounds. Has your child outgrown their bicycle? BMX, mountain, hybrid, and road bikes are all on offer. For a while, Canadian Tire even carried electric scooters for the daily commute.

Despite its stronghold up north, Canadian Tire never really caught on in the United States. The first attempt at entering the American market relied on buying out Texas-based White Stores, Inc. in 1982. Just four years later, Canadian Tire called it quits after losing a ton of money. However, plucky Canadians aren’t so easy to deter. Just look at the hope Toronto Maple Leafs fans have at the start of every hockey season despite first-round Stanley Cup elimination being almost guaranteed.

Nine years after Canadian Tire’s first foray south started, Auto Source was born. Tire publication Tire Business, affiliated with Rubber Journal (I swear I’m not making this up) reports that each Auto Source store stock 18,000 different parts and featured up to 24 repair bays. Unfortunately, these emporiums of hooptie supplies never really made money, so Canadian Tire shut them down in 1995 to focus on Canadian stores. Still, the Auto Source project didn’t amount to nothing. Canadian Tire now has a chain of stores up north called Partsource that sells such wonderful things as Red Line MTL right off the shelf.

Canadian Tire is, in a way, Canada’s everything store. It’s been around for a century as a place for you to buy two-stroke mix for your sled, snag a fresh set of drill bits, and pick out a new toque while Tragically Hip plays softly over the PA system. That distinctive new tire smell permeates every location, a core memory for anyone who’s eaten maple syrup directly off of snow. Canadian Tire is a national hallmark and I urge anyone visiting Canada to pop in and see the bewildering array of stuff at what is inarguably Canada’s store.

Thomas is a Nu Rave-blaring, heel-toe downshifting, maple syrup-swilling, chassis-geeking, junkyard parts-hauling, floppy-haired scenester who's been writing about cars since college. His current ride is a 2006 BMW 325i with the six-speed manual gearbox. Instagram: @thomas.hundal Twitter: @thomashundal
Read All My Posts »
PrevPreviousA Strange And Uncommon Automotive Detail: The Nose Handle
NextCalifornia Seeks To Ban Sales Of New Diesel Semi Trucks By 2040Next