Ads That Made Me Giggle: 2001 Hyundai Santa Fe vs 1999 Subaru Forester

Welcome back to Shitbox Showdown! It’s Wednesday, which means we’re halfway to the weekend. Today’s cars have ads with something that amused me in them. Nothing more, nothing less. Before we get to them, let’s see what you did with yesterday’s convertibles:

Whoo! This one’s tighter than an Arizona Senate race. But as of this writing, the Sky has the win by four votes. Personally, I’d prefer the Sebring. I have a fun sports car; a relaxed cruiser sounds nice, and not boring at all.

Anyway, moving on: Despite how it may seem, there is very little art and almost no science involved in choosing the cars for this feature. I find one car that catches my fancy, then go looking for a mate for it. Today’s choices were inspired by a typo (or possibly auto-correct?) that literally made me laugh out loud. Let’s take a look. 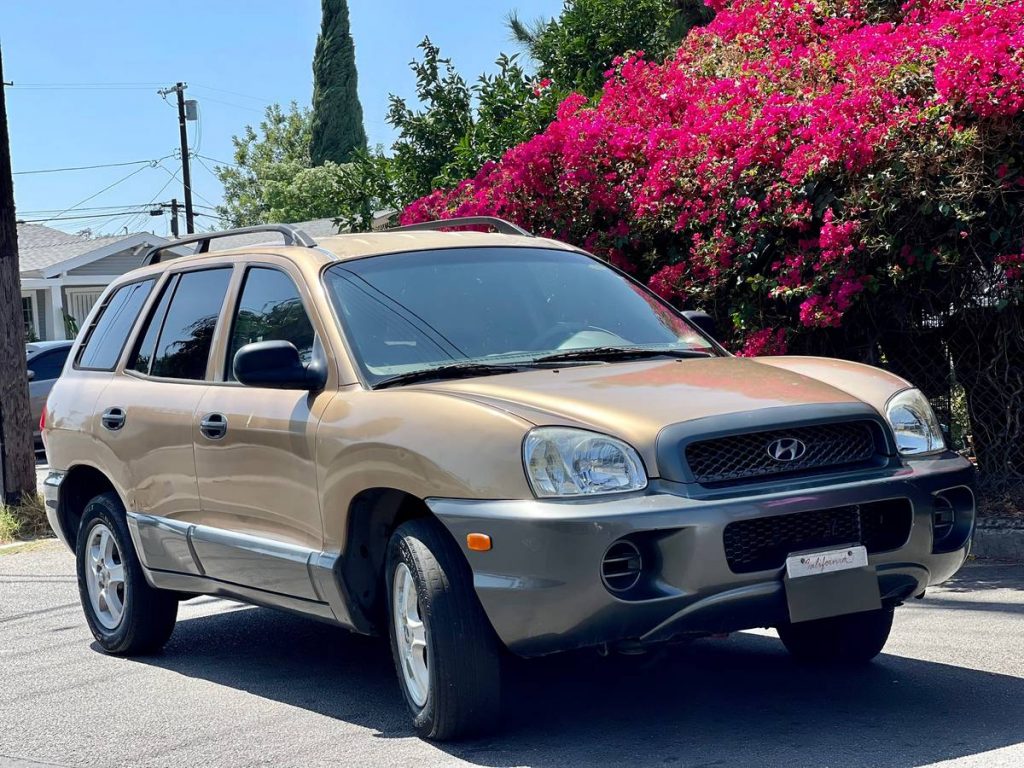 Hyundai’s long road to being taken seriously took a big step forward in 2001 when the brand introduced the Santa Fe, its first SUV, technically a crossover because of its car-derived platform. While it was a bit crude and plain compared to the Toyota RAV4 and Honda CRV, it was cheaper. It was a formula that had worked for Hyundai in the past, and it worked again. The Santa Fe was a hit. 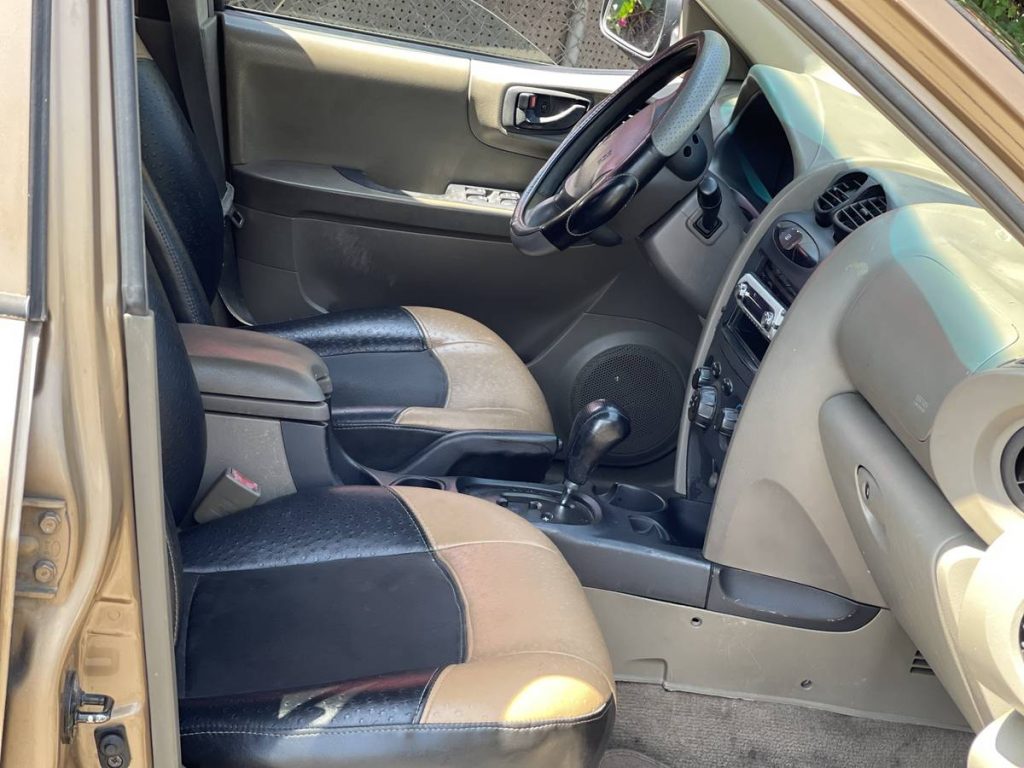 This is a pretty fancy Santa Fe, with the V6 engine, what look like leather/suede seats, power windows and locks, functional air conditioning, and that’s not nearly all: “tainted windows.” Sometimes I feel I’ve got to (clap, clap) roll you down… 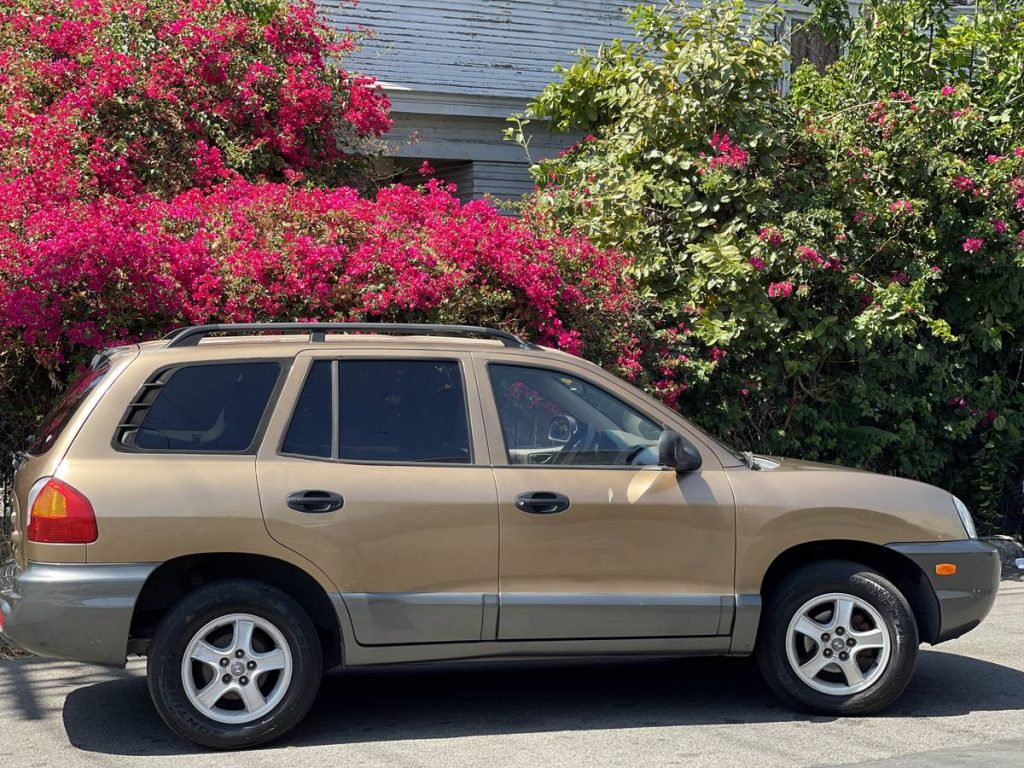 References to ’80s Brit-pop notwithstanding [Editor’s Note: Ah, that explains it. -DT], this ad definitely is not giving us the “Soft Sell.” The listing has lots of capitalization, more than one double exclamation point, and yet glosses over a failing transmission solenoid pack as “needs TLC.” Yeah, that’s a bit more involved than a bath and an oil change. And I bet there’s a warning light or two on the dash because of it. But the seller says they drive it daily “AS IS,” bald tires and all. 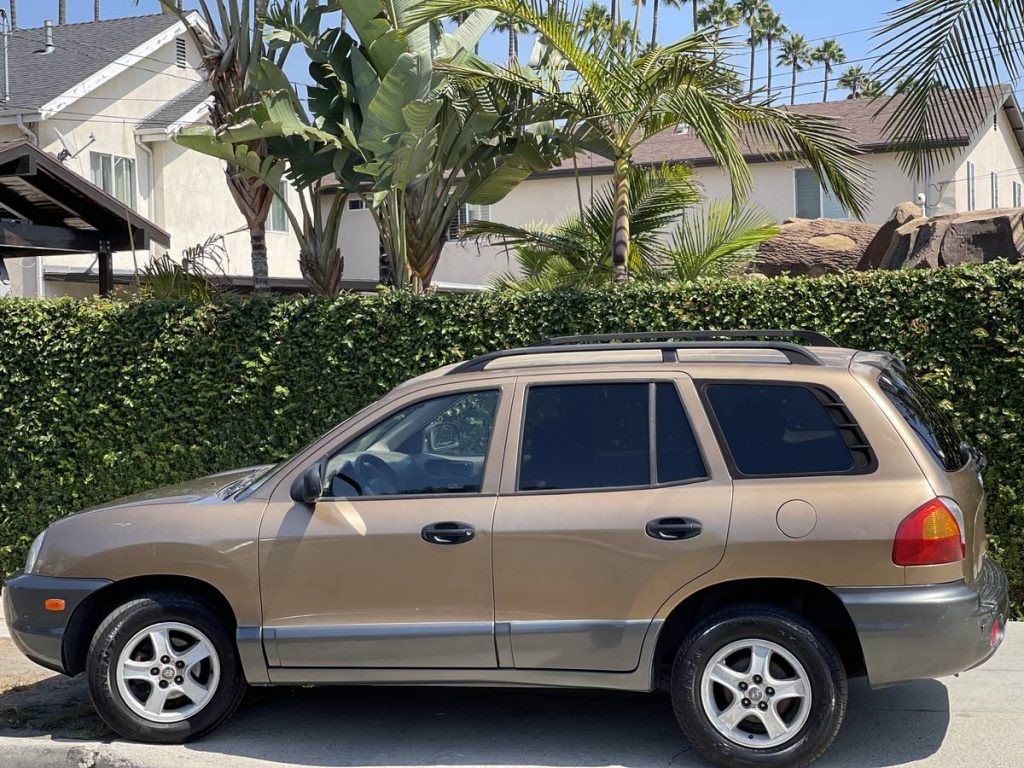 Anyway, if you want a little gold-colored Korean SUV crossover thingy, here you go. I give you all an author can give you. 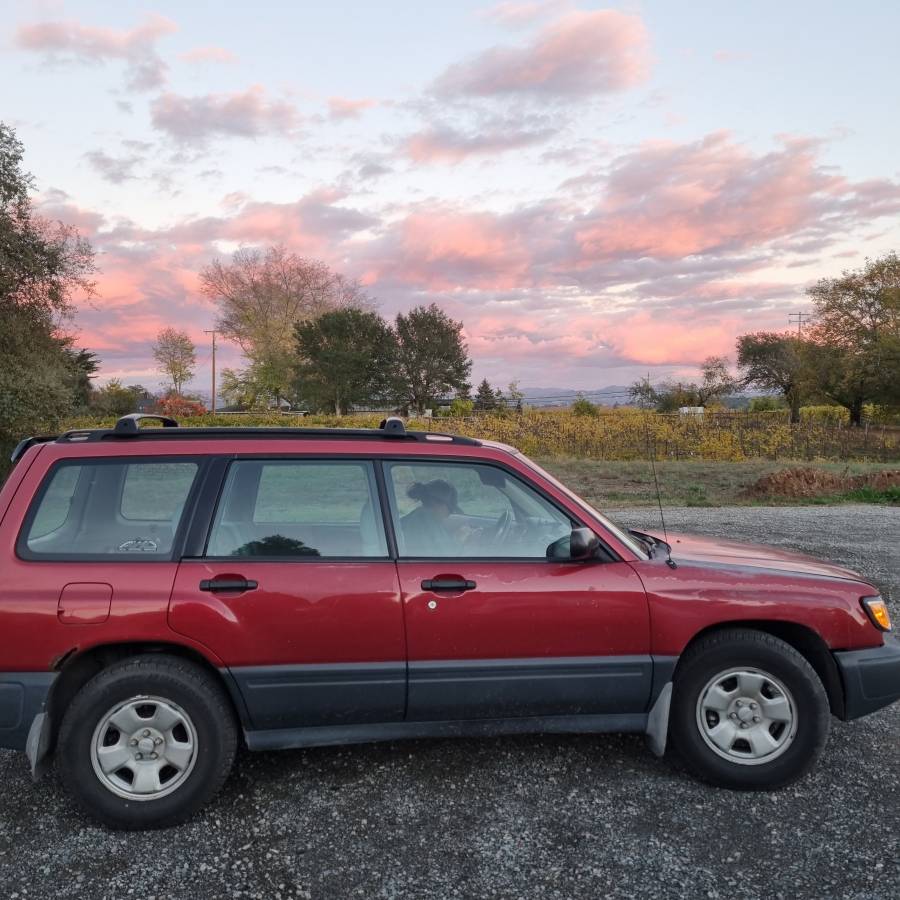 This is a car I’ve never owned, and almost certainly never will own, but I feel like I know it, or at least I know everything I feel I need to know. First-generation Subaru Foresters are still everywhere here in Portland; you can’t throw a rock without hitting one. (Believe me, I’ve tried). Looking at this car, I can practically see the cloud of vape smoke billowing out of the window, and smell the faint whiff of leaking coolant. 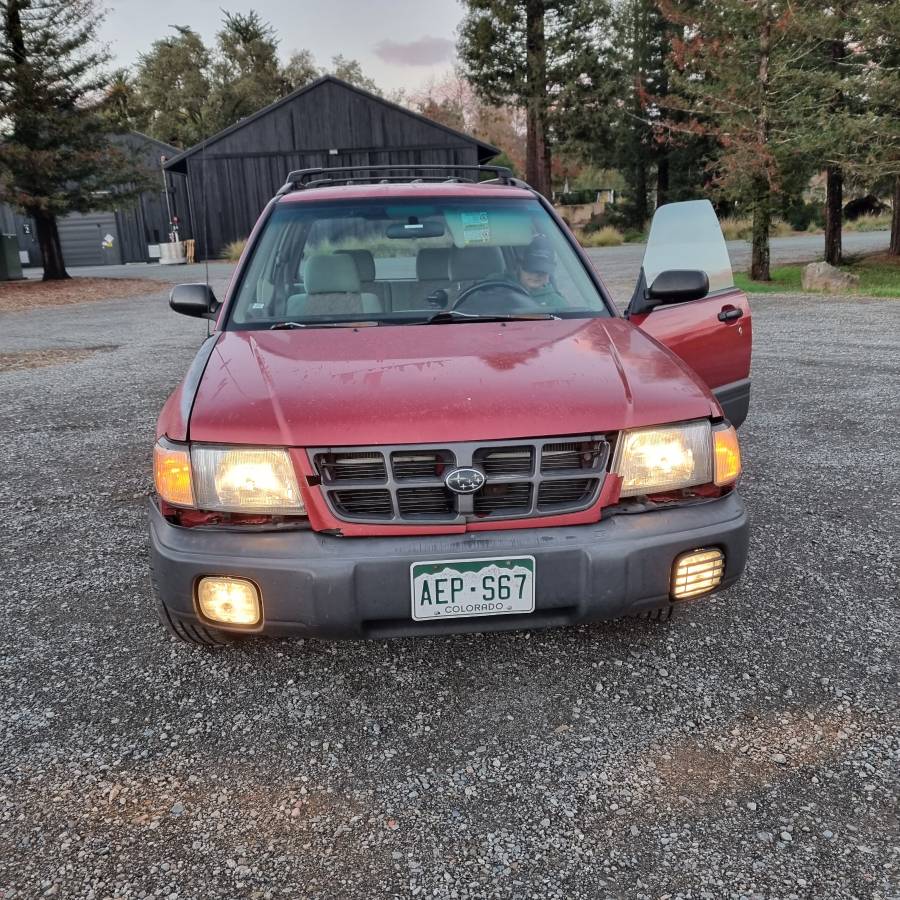 They do seem to be good cars, though. This one boasts over 200,000 miles on its odometer and just made an uneventful trip from Colorado to northern California. It has new tires, and a working tape deck. And it sounds like they’re throwing in some cassettes for it as well, “if you consider this a bonus.” No word on what they are, but any fan of Good Omens knows that by now, they’re all Queen’s Greatest Hits anyway. 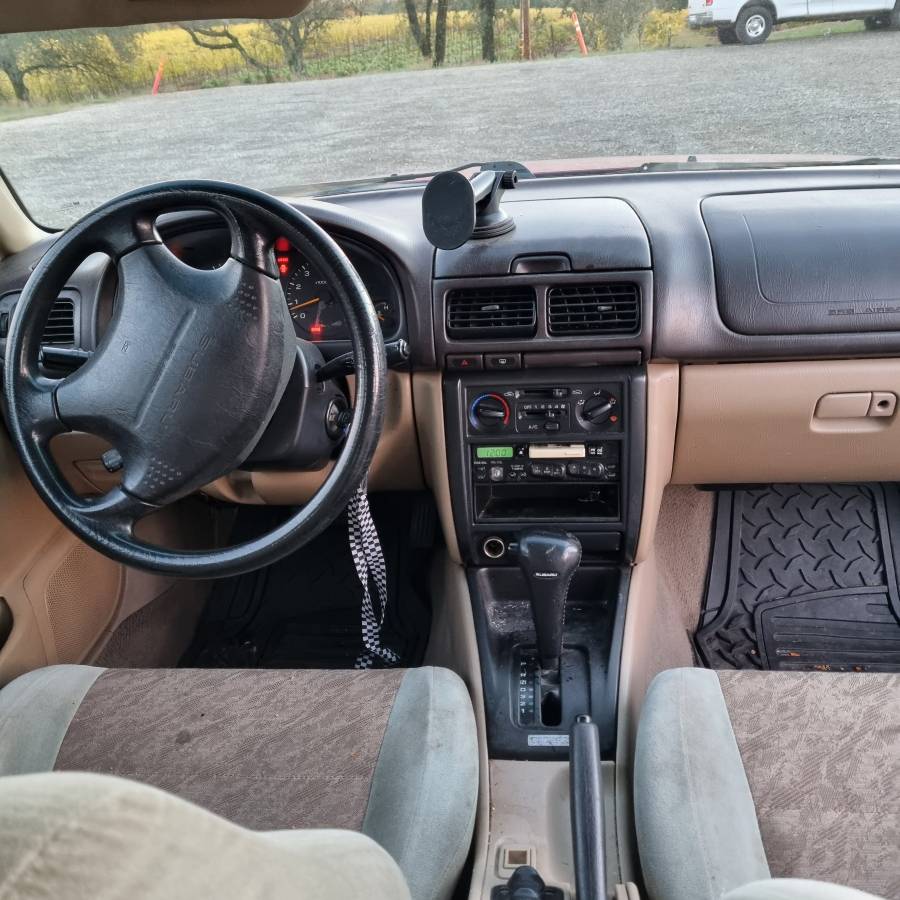 Inside, it actually looks pretty good for such an old car. It could use a cleaning, but the upholstery is intact, and nothing looks egregiously broken. The outside isn’t quite as impressive; it has some nasty corrosion in the rear wheel arches, and probably elsewhere as well. That graying black plastic cladding is likely hiding some ugliness. I wonder if one of the included tapes is Rust Never Sleeps? 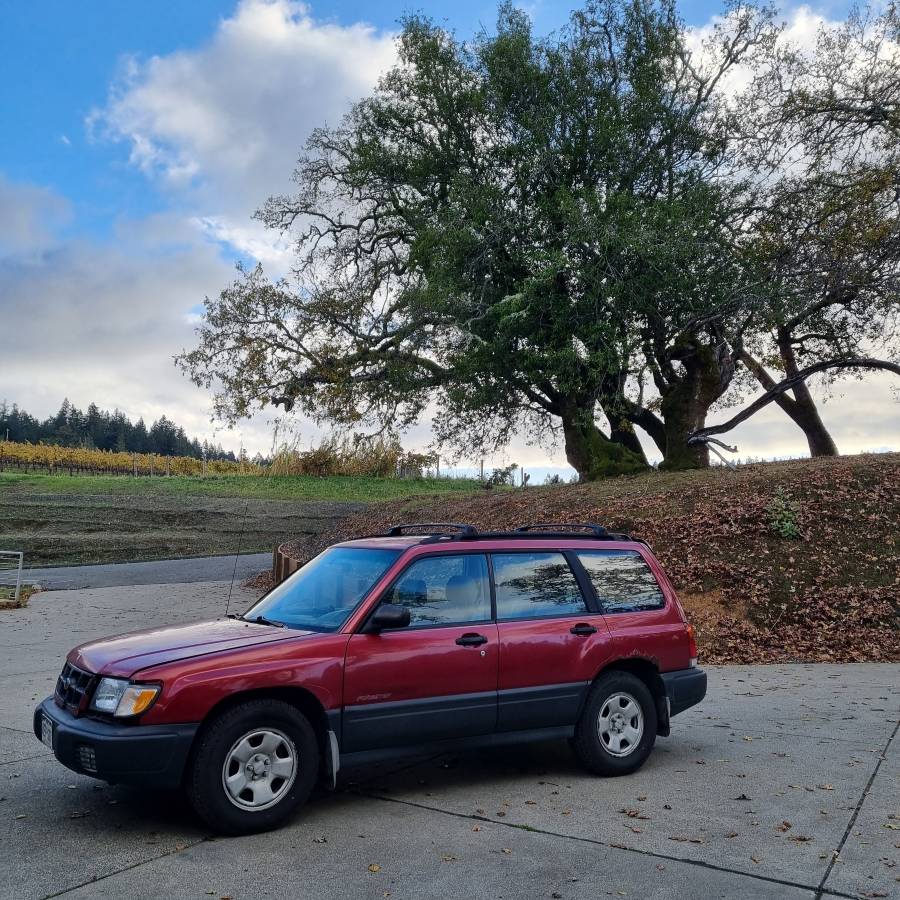 I confess I am not a fan of Subaru in general, but the people who have these things seem to really love them. I’m not sure this one has two thousand dollars’ worth of life left in it, but I guess if somebody does, more power to them.

And that’s what we’ve got to work with: a questionable transmission or early-stage terminal rust. Choose carefully.