I’ll never forget being, like 12, a kid with an “old soul” and an above-grade-level reading ability. I buried my nose in then-new car forums, and whatever car periodical I could read in the magazine aisle while my mom filled the cart up with L’eggs Brown Sugar brand pantyhose.

Later, after we had spent the equivalent of a mortgage payment on groceries, I’d get in the car and annoy her with facts about the Volkswagen Passat, genuinely upset and clueless as to why the V6 engine in her Ford Econoline, and not a big German W8, was shuttling all seven of us around. She’d tell me to shut up, and that those opinions in those magazines aren’t real life. “Your opinion will change when you finally start driving, you’ll see, I promise,” she said.

I was convinced she was wrong. Those folks in the magazines and blogs and on Jalopnik WERE the real deal. Their opinions were the be-all and end-all, dammit! Spec sheets, 0-60 times, and whatever the guys online wrote were scripture! Except, when I started driving, I realized that my mom was right.

And, after driving a car that the internet has said is one of the “worst” vehicles ever made, I realized once again that she’s right; that infamously bad car is the Alfa Romeo Arna. 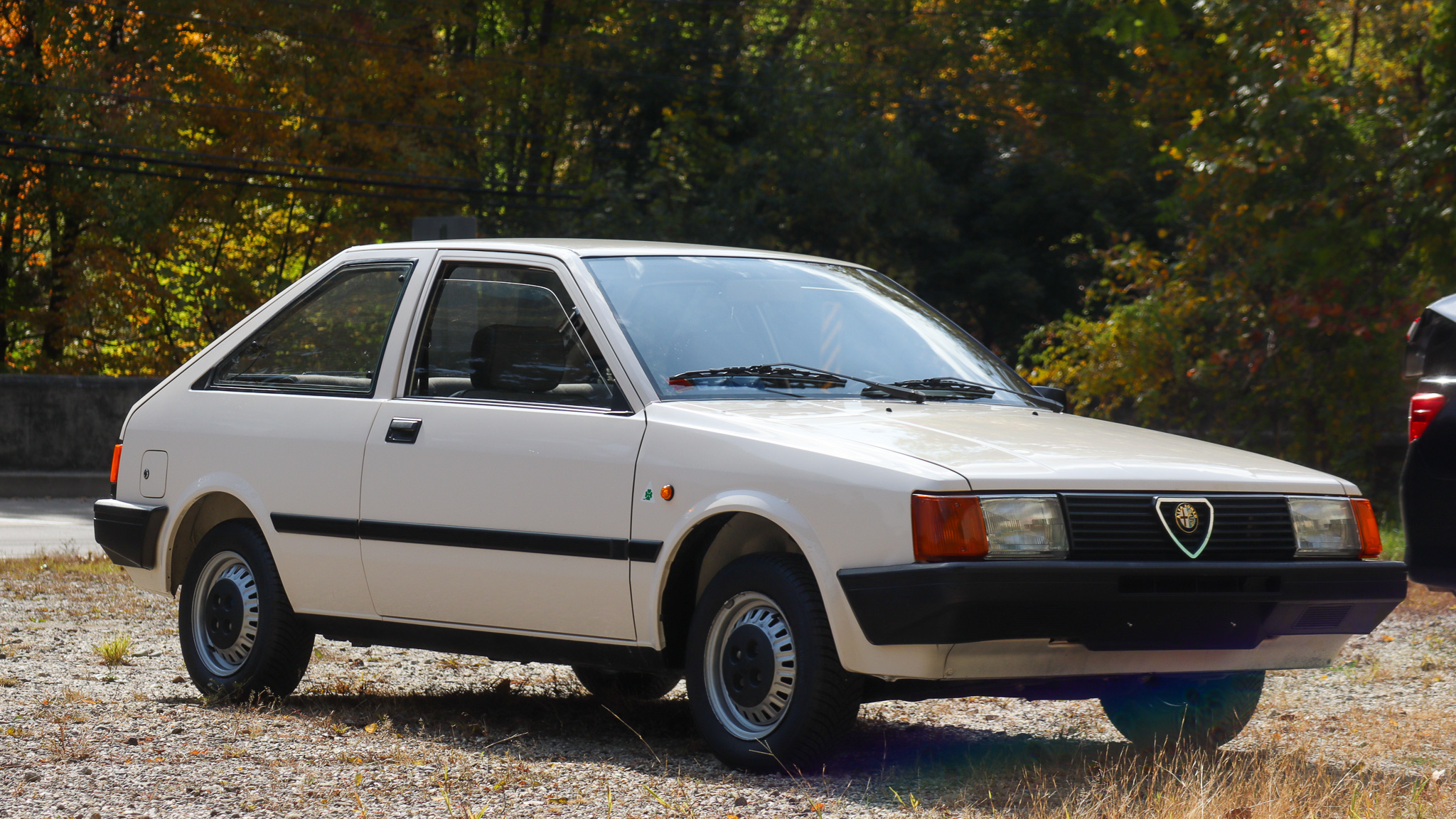 For those not in the know, the Alfa Arna is one of those cars that gets featured in the ubiquitous “10 Worst-Made Cars Ever” SEO-type lists (that’s “search engine optimization” — in other words, it’s about clicks and not about substance). The backstory is that in the 1980s, Italian brand Alfa Romeo wanted to replace its aging front-wheel drive Alfasud hatchback (see below) with a new model, but Alfa didn’t have the cash to develop an entirely new car on its own. Instead, the brand partnered with Nissan to develop a compact European hatchback.

Sort of. Alfa Romeo Arna’s body is merely a Nissan Cherry Europe with what appears to be an Alfa Romeo shield haphazardly glued to the front. Here’s a look at some Nissan Cherrys:

Yet underneath, things are more complicated. The rear axle and suspension design from the Nissan Cherry were preserved, but the front half of the car is pure Alfa Romeo. The engine and transmission were from the old Alfasud, meaning a flat-four instead of an inline design. The front suspension and front brakes were also of Alfa origin, too. 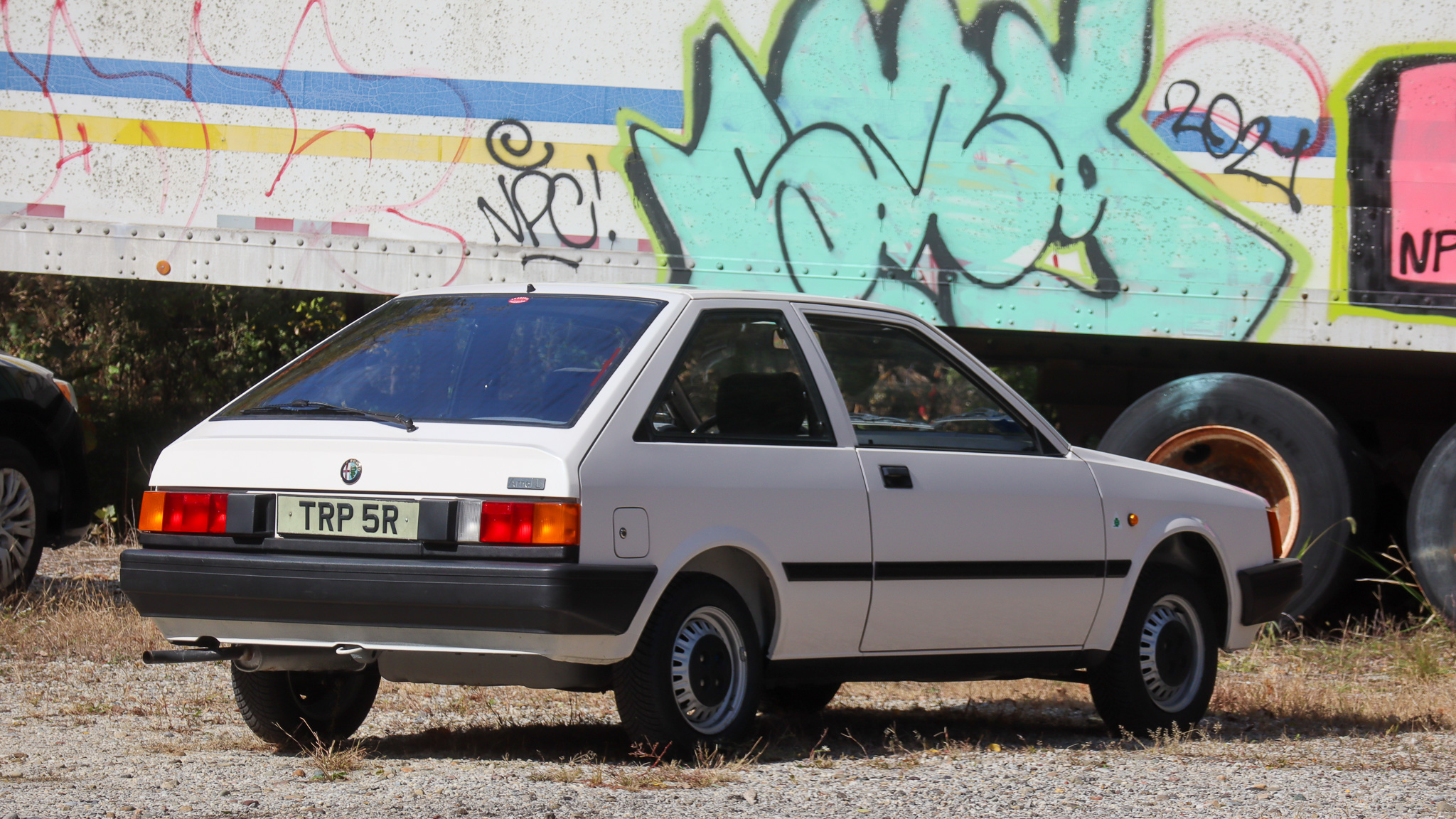 The result is something that most journalists over the past 15 years or so, like The Autopian’s Thomas Hundal, have said was “backwards.” It was an ugly car with unreliable engines that didn’t handle very well, and Alfa Romeo usually gets two out of those three things right.

Yet, when I got the chance to drive an example owned by famed Ohio collector Myron Vernis, I didn’t find those things at all. Even in the context of the era, I actually, uh, um, kind of liked the Alfa Arna.

Myron’s example is a very low mile, base level 3-door Arna. Power comes from a manual choke, carbureted, 1.2-liter flat-four, that made around 65 horsepower or so back in its heyday. It’s sent to the front wheels via a five-speed manual. 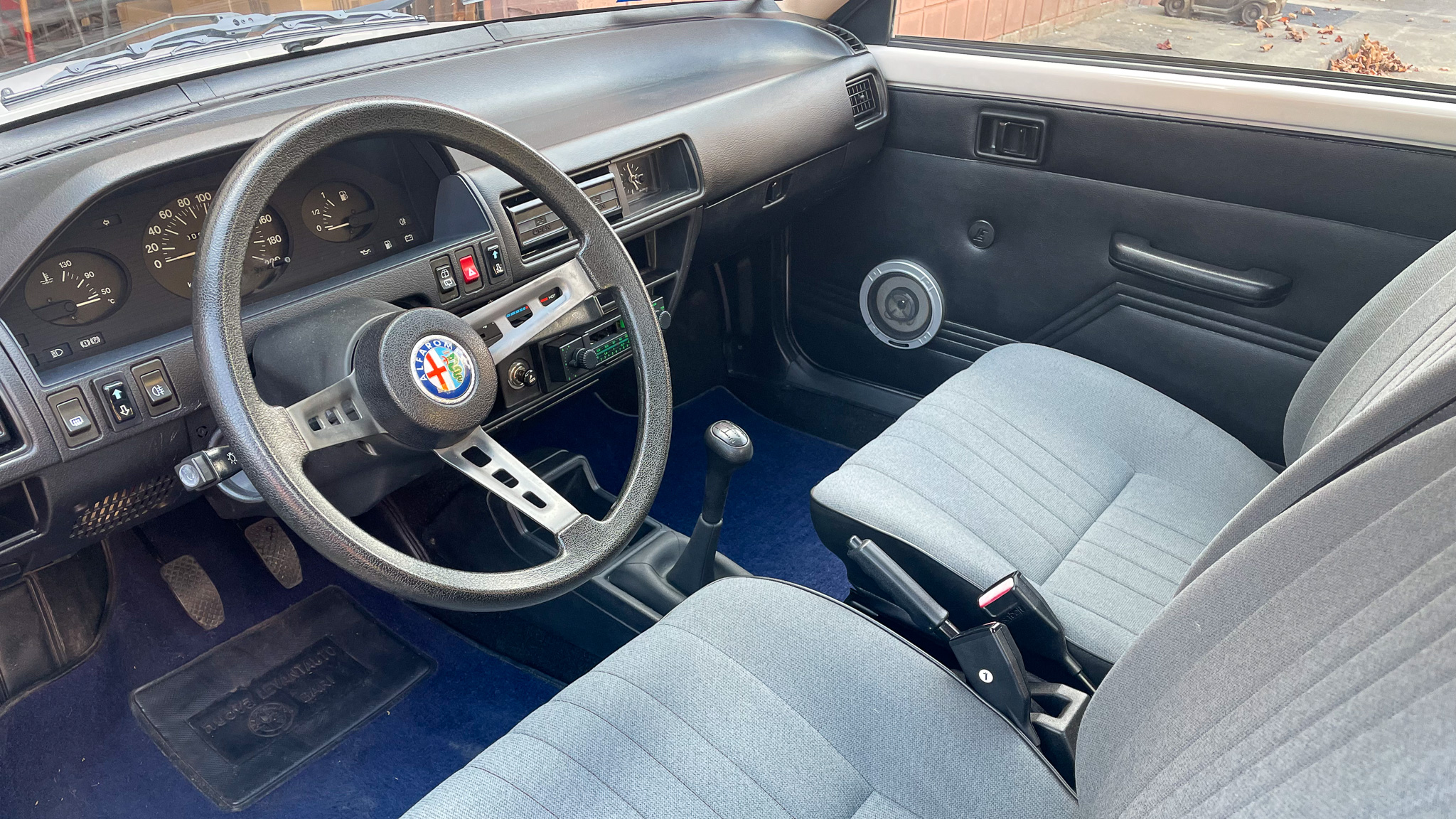 Now, the Alfa Arna isn’t by any means fast. But I found it to be a sprightly lil’ thing. Remember, it’s a 1980s-era Nissan, so it’s basically made of tinfoil from Dollar General, meaning the car is super light. The Alfa Romeo flat-four is remarkably responsive for being a carbureted engine, and the car’s midrange pull is charmingly strong—the polar opposite from what would likely have been a Nissan E or C engine found under the hood of budget Nissans of the era.

Handling is entertaining too, albeit, the skinny and balloon 165/70/R13 tires do make the on-center feel a bit vague. Still, the Arna is a fun car to rip around Ohio in; roll the windows down, put the pedal to the floor, and let that raspy flat four fill your ear canals.

After about a 25-minute joyride and a quick photoshoot, I returned the car to Myron. For him, the Arna was a “Fuck it, why not?” purchase. But he’s been remarkably impressed with the car. We both agreed that the negative press and articles surrounding the car’s abilities were likely overblown, written by folks who hadn’t seen the car or let alone driven one. Is it pretty? Eh, it looks like every other generic 1980s Japanese hatchback. Nothing special, but hardly the automotive Quasimodo everyone made the thing to be. 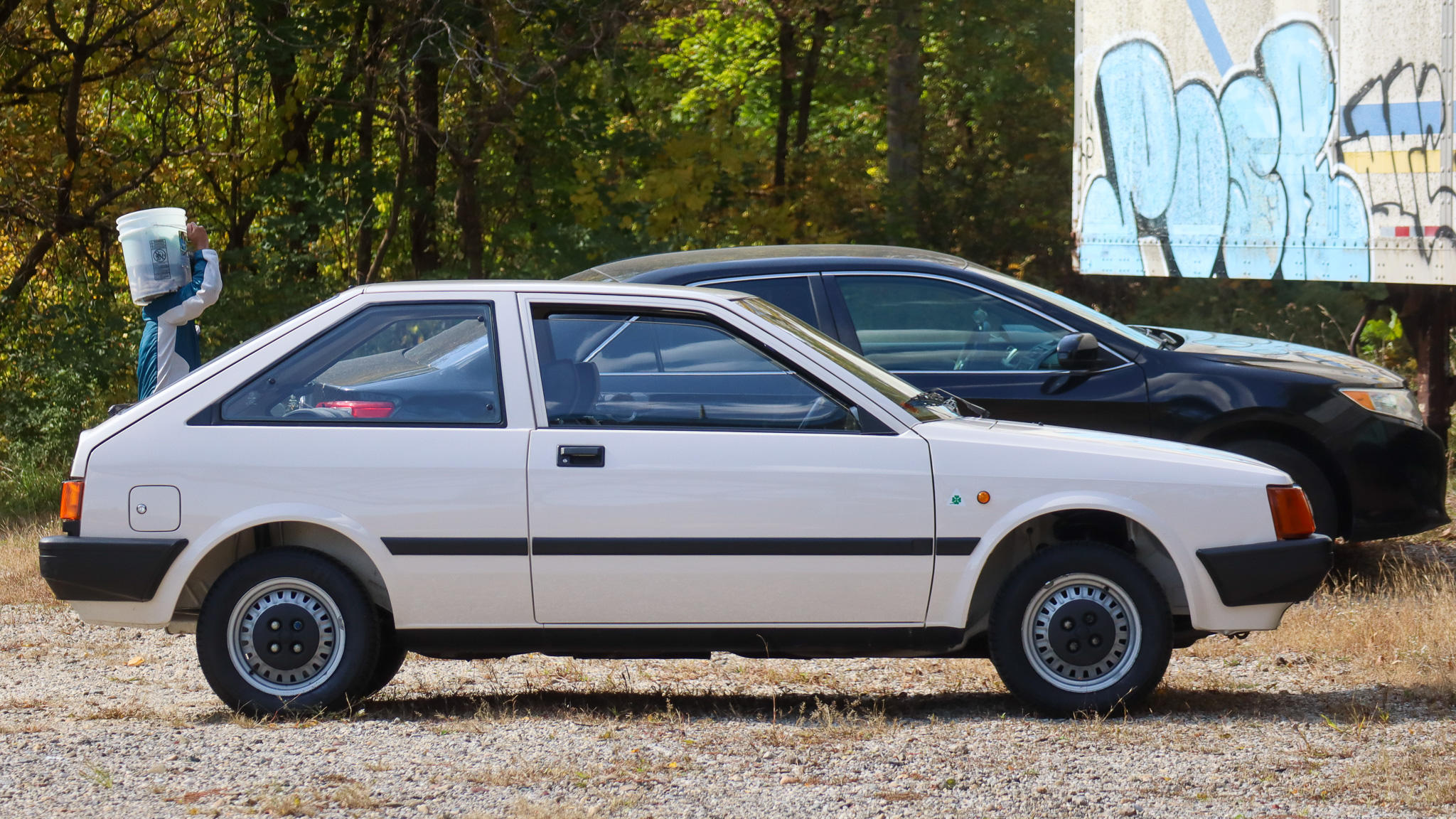 But, there’s no need to apologize for the Arna entirely. True, in a 25-minute drive, there’s no real way to ascertain the car’s reliability. Also, if you consider the Arna’s total sales numbers, it was a complete flop. Alfa Romeo kept the old Alfasud in production a bit longer until it readied a real replacement in the form of the Alfa Romeo 33. Both vastly outsold the Arna. (Fun fact: Despite the Alfasud’s well-deserved reputation for rust, it still stayed in production for nearly 20 years. You just don’t see that kind of tenacity anymore.)

I’m just saying, drive the car and form your own opinion. [Editor’s Note: Agreed! Jason has been saying essentially this about the Yugo for years! -DT]. My mom was right: Just because someone says something online, doesn’t mean it’s gospel. You’re free to enjoy something your fave doesn’t like; get out there and drive things.

Kevin Williams is an automotive journalist based in Ohio. His writing has appeared in Road & Track, Jalopnik, AutoGuide and many other places.

We Need To Talk About The Alfa Romeo Arna, The Car That Foolishly Blended Japanese Styling And Italian Engineering

Read All My Posts »
PrevPreviousOur Daydreaming Designer Imagines Corvette Sedan And Wagon In 1978
NextWhich Silly Car Should I Rent From Turo In Los Angeles This Week?Next