Would you buy a Supra crossover? How about putting a Camaro sedan in your driveway? This topic of car brands taking a popular model and expanding into never-before-seen body styles seems to be pretty hot these days at the Autopian.

I don’t mean just making a convertible or adding a sloping rear roof to a crossover and calling it a ‘coupe’.  We are talking about taking, say, a model that has only been sold as a sedan or coupe and offering it as something totally different like a sport ute. Numerous automakers are discussing it, and some companies have already done it with things like the Mitsubishi Eclipse Cross and the Ford Mustang Mach E: 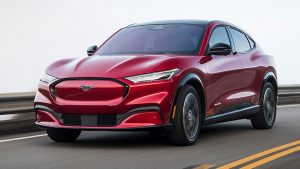 This is not even a remotely new thing by any means. Ford raised eyebrows before by making a four door Thunderbird in 1967, and later even offering a full range of Cougars (even a station wagon) in the seventies and eighties. Neither of these expansions really succeeded, but it obviously isn’t stopping the idea from being tried again. 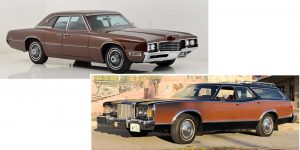 The latest attempt at potentially turning a one-body-style car into a series of vehicles involves another American icon: the Corvette. Now nearing its seventieth year in production, the self-billed ‘America’s Only True Sports Car’ has never been offered in anything other than a two-seater coupe form. There was one attempt during the creation of the 1963 Stingray to make a four seat model to compete with the Thunderbird, but it never got past the prototype stage (apparently an executive got stuck in the back seat when the latch broke and had to be freed by a mechanic). 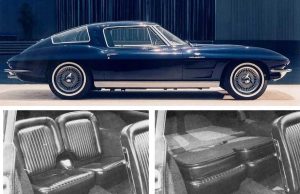 An aftermarket firm even converted some into four door sedans called Corvette America. Created out of essentially welding two ‘Vettes welded, if nothing else this dachshund-like solution proves that the idea was not particularly sound.

Will the idea of Corvette sedans or sport utes work? We’ll have to see, but I never thought the Cayenne would be anything but a short lived joke, and now Ferrari is even making a crossover.

Still, for perspective, I thought I’d take a look at what the idea of a range of different Corvette body styles might look like if launched in, say, in the heart of the Malaise era around 1978. Here’s the ‘Vette available that year: 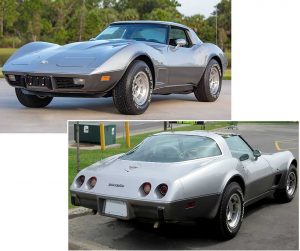 Where do we start for our 1978 Corvette Touring Sedan? We’ve already discussed how General Motors rarely created all-new platforms for cars, instead choosing to share platforms between brands with often disastrous results. In the case of the four door Corvette, the likely candidate for a high-performance sedan would be the mid-sized 1978-81 A body which underpinned super-successful GM lines like the Chevy Malibu/Monte Carlo, Buick Century/Regal, Olds Cutlass and Pontiac LeMans/Grand Prix. This thing was later sold as the ‘G body’ after the ‘A’ designation was moved to a front wheel drive chassis and the RWD original refused to die. When I say ‘refuse to die’ I mean it in every sense of the word: if you judge cars based on durability and dependability, these things are likely some of the best cars General Motors ever built. Our own Thomas Hundal actually owned one (which is apparently still running) despite the fact that I am sure he was born after the last one left the production line in 1988. Even in the rust belt today, you’ll see a few prowling the streets like this Chicago Cutlass which was still commuting each day a little while back despite looking every one of its 400,000+ miles (according to a different site that spoke with the owner).

The only real crime against humanity committed by these cars was that GM chose to save a few bucks by installing windows on the rear doors that did not roll down. If you’re around my age you’ll remember almost dying in the heat of the back seat of one of these one the way to The Empire Strikes Back.

To be a Corvette, especially in the seventies, you absolutely must have a sloping nose with pop up lights. This creates a bit of a problem with an existing chassis since things like the radiator placement on the A/G are already determined. You end up with a long pointy nose not unlike the Dodge Charger Daytona and Plymouth Superbird. Still, I’ve tried to minimize it as much as possible. Here is the Touring Sedan model: 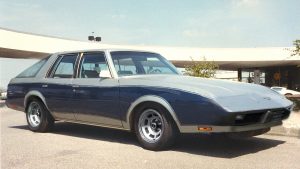 On the sides, small fender flares will cover the ‘Vette aluminum wheels and tires, and I’ve tried to use the two-tone paint combination to help indicate (read-fake) a flowing fender line like on the original car. You just aren’t going to economically get a sculpted fender on this boxy body in low production numbers, and I refuse to stick on big plastic flares like they did on the concurrent Chevy Monza Mirage; you can practically see the seeping glue coming out of the sides of these appendages:

For the design in back, we need to delve into the unfortunate history of some of the General Motors cars of the time, and you’ll not believe what you see. When the General is the butt of jokes, it sadly comes from true-life bad decisions like these.

First of all, you could actually get an A Body in a fastback style on Oldsmobile and Buick models. The only thing is, they weren’t hatchbacks; that’s a standard trunk lid on there:

source: car info and The Truth About Cars

Next, all Corvettes starting in 1978 had a big glass rear window. Of course, this opened up, right? No, you still had to shove all of your cargo in through the folded down front seats. The glass back didn’t open until four years later, and only on top models. 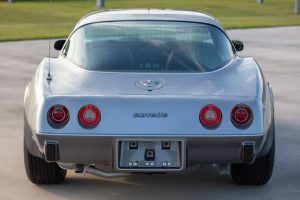 Lastly, there were two special A/G Bodies that were built near the end of their run in the eighties. GM offered large, sloping glass backlights on versions of the Monte Carlo and Pontiac Grand Prix in an attempt to homologate a car that could catch up with aero Ford Thunderbird on the tracks of NASCAR. 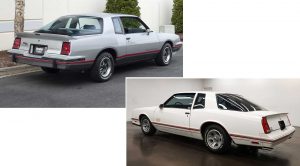 Based on the General’s earlier choices, you’ve probably already guessed that this glass did NOT open, which required putting luggage through a hilarious mail box sized opening behind a tiny trunk lid. 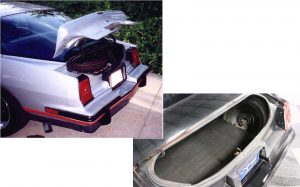 I’ve added this kind of large glass window to my ‘Vette sedan, but it absolutely WOULD open up as God intended it to do. With a fold down rear seat from the wagon, you’d be looking at Saab-level cargo capacity, so this car would at least have a level of practicality other GM A Body sedans never had. 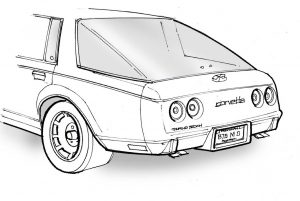 The overall look is rather silly but, at the same time, sort of intriguing in a very disco kind of way. My only regret is that it doesn’t look enough like another dumb car based on an earlier A-body: the SUX6000 from Robocop. 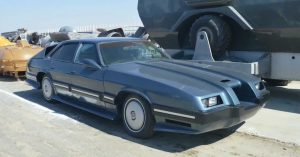 Inside, we’d add a dashboard and interior with cues that echo the concurrent ‘Vette, but with the more upright A Body dash (actually very similar to what was in the Pontiac Grand Prix with all of those identical circles). Obviously, lots of GM parts bin items like the window switches, climate controls, and the optional AM/FM 8-Track CB sound system shown. 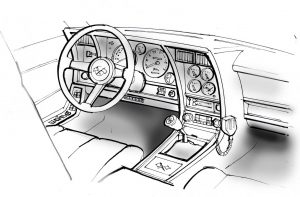 While we’re at it, we might as well offer the station wagon body as well since you’d just be plugging the new body components on front. It might be inadvisable to offer the rear facing jump seat that was on all A Body wagon option lists, but the idea of a seven passenger Corvette is too tempting. Note that I’ve placed Corvette-style taillights in the tailgate of the Sport Wagon, but we would have taillamps in the existing super-low standard A Body wagon position as well; these act as stop/tail/turn signals when the tailgate is open (the door jamb switch on the lower tailgate would trigger them to work). 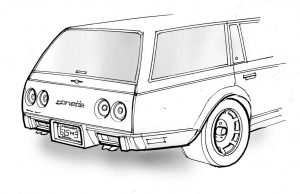 Wait, if we’re going A body wagon ‘Vette, you know what that means is a possibility, right? To paraphrase Jeff Goldblum’s character in Jurassic Park, just because you CAN do something doesn’t mean that you should, but we ABSOLUTELY should make a Vette-a-mino! Yup, let’s get these mods onto an A Body El Camino back structure for a Corvette pickup. If it isn’t done in-house, someone in the aftermarket will, and if there’s one thing GM doesn’t like it is leaving money on the table. 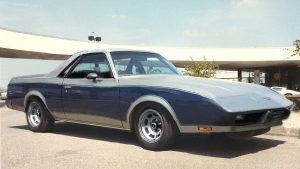 As they say, you can’t turn a pig into cheetah, but you can make a very fast pig. Maybe that isn’t fair; honestly, in my experience (admittedly years ago) I found the A/G Bodies to be nicely sized and deceptively reasonable cars to drive. We’re going to do what we can to make this mechanically the Moby Dick of GM Mid Sizers (admittedly the GOAT is the Buick Grand National/GNX).

We could certainly go a long way to improve the ‘Vette Cred of this chassis by adding quicker steering, increasing the spring rates, putting on a rear anti roll bar and make the one up front about the diameter of your forearm. Also, we’d install disc brakes onto the live rear axle.

Under the hood, the same small block options available on the ‘Vette coupe would be on the sedan, primarily a massaged 350 small block with a four barrel. I’d want to make the 220HP L82 available at the time as an option on the Touring Sedan and Sport Wagon, but that might be problematic. The A/G body weighs about the same as the original ‘Vette (maybe less in some cases), and there is NO WAY that Chevy would allow a seven-passenger STATION WAGON to beat the Corvette in a drag race (the Buick GNX drew ire for doing this very thing). Nothing could stop a manual transmission option though, as I’ve seen a number of four-speed equipped Malibus. We wouldn’t be able to make a 528i out of it, but don’t forget that the Corvette (at that point on essentially a 15 year old chassis) was hardly a 928 at the time. Accords of today could outrun it, but the ‘Vette Touring Sedan would easily be one of the fastest and best handling (on smooth roads, of course) sedans you could buy at the time.

Hopefully the upcoming new models proposed today to expand the Corvette line won’t be as inane as the ones I’ve come up with, but the fact is that if General Motors had released this series of A-body based Corvettes in the seventies, they probably would have found buyers. Let’s face it, if people bought a Cavalier branded as a Cadillac, then a faster, slope-nosed four door Monte Carlo should have been an easy sell.