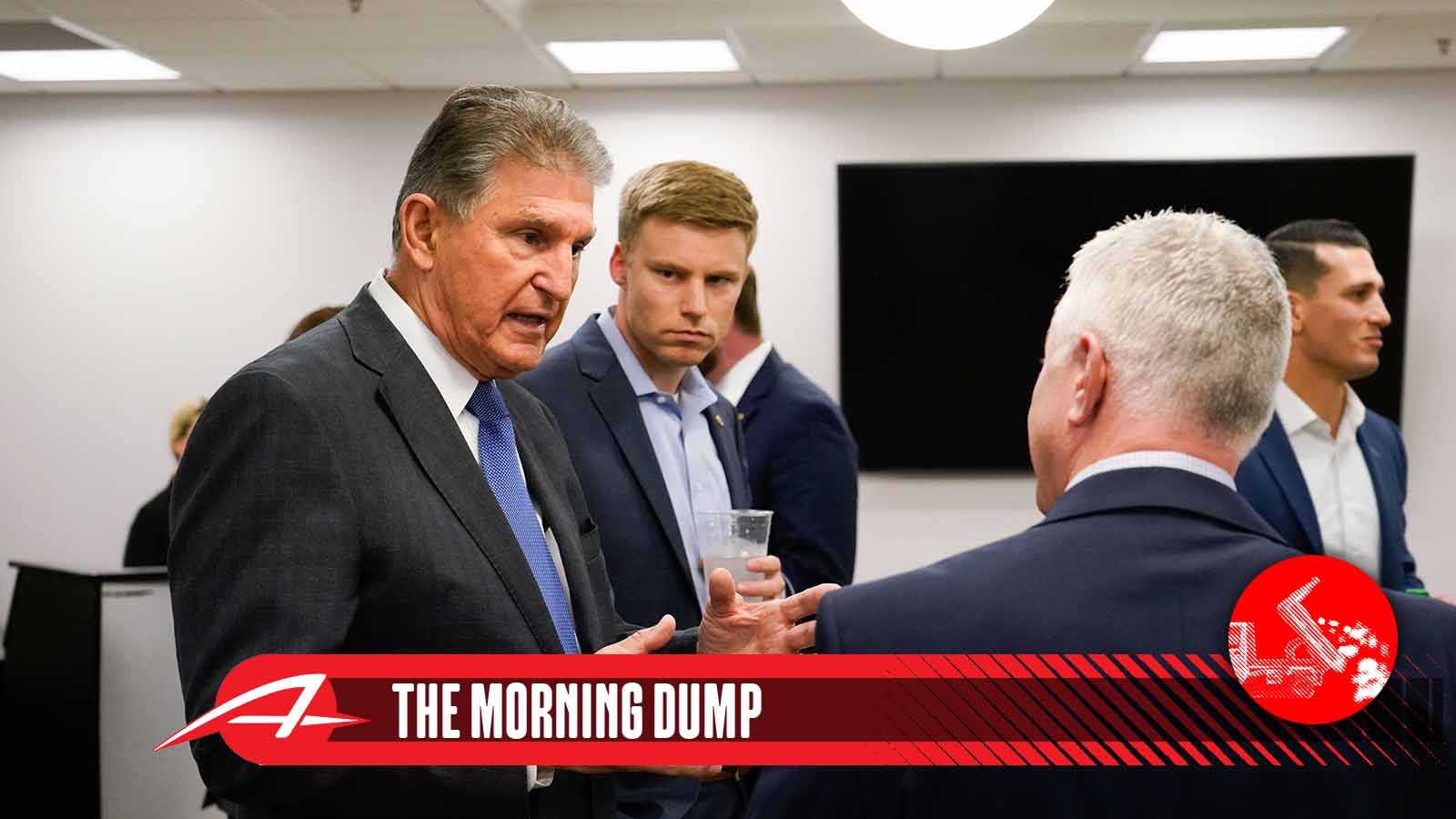 Today’s Morning Dump takes us on a wild ride from West Virginia to South Korea, France to Japan, Australia to Iceland, and Ingosltadt to the ski slopes.

Now that France v. Argentina is behind us, it’s now time to focus on the next great battle: West Virginia versus South Korea (and Germany and Japan). Most foreign car companies are not super pumped about the Inflation Reduction Act because it requires replacing the current battery supply chain (which relies heavily on places like Russia, China, and Venezuela) with one that’s based in “friendlier” places. It places an emphasis on U.S. manufacturing of cars and components.

The main enforcement mechanism in the Inflation Reduction Act (IRA) for encouraging companies to redevelop the battery supply chain is with the up-to $7,500 tax credit that buyers can get for buying a qualifying car.

Besides Tesla, the most successful group of EV brands in the United States by sales (and, arguably, reputation) are the South Korean trio of Hyundai, Kia, and Genesis. These brands, all under the Hyundai Motor Group umbrella, are therefore extremely keen on continuing to get these types of tax credits. The South Koreans are not happy with the law and reportedly view it as a betrayal of President Biden’s commitment to stronger bilateral economic cooperation between the two nations.

It’s another, often less useful feature of our system of government that one or two senators can hold up the entire functioning of the country whenever they want, which is why the opinion of Senator Joe Manchin of West Virginia, who it’s worth noting has historically represented the interest of the fossil fuel industry, is so important. Machin was key in passing the IRA, and he is not pleased about all this “interpretation” stuff. You can read his letter to US Treasury Secretary Janet Yellen asking her to strictly interpret these laws. Here are some highlights:

As the sector responsible for the largest portion of total U.S. greenhouse gas emissions, there is no question that we need to be doing all that we can to reduce emissions in the transportation sector. That is why there were several provisions in the IRA aimed at not only increasing the domestic manufacturing of cleaner vehicles, but also helping consumers and businesses enter the clean vehicle market.

Unfortunately, I have heard that some automakers and foreign governments are asking your agency for a broad interpretation of 45W that would allow rental cars, leased vehicles, and rideshare vehicles (such as those used for Uber and Lyft), a huge piece of the U.S. vehicle market, to be eligible for the full $7,500 commercial vehicle credit as a way to bypass the strict sourcing requirements in the 30D Clean Vehicle Credit (30D). If these vehicles are deemed eligible, I can guarantee that companies will focus their attention away from trying to invest in North America to meet the requirements of 30D and will instead continue with business as usual, putting our transportation sector further at risk. The 45W credit, as the name implies, is intended only for commercial use and your department must follow congressional intent and release guidance that would ensure 45W will not be used on vehicles that will be leased, rented or used for ridesharing purposes.

I’m just gonna take that whole first paragraph in good faith, even though I’m not certain that Senator Manchin’s voting history is particularly a persuasive argument for his belief in the importance of reducing greenhouse gasses.

The second paragraph is a big question: Does a car leased to Uber count as a “commercial” vehicle? Senator Manchin says nope. Automakers say yep. From a Bloomberg report:

The push [for reinterpretation] was coming from the likes of Rivian and Hyundai, as well as the government of South Korea. They encouraged Treasury Secretary Janet Yellen, whose department has until year-end to finalize details of how the IRA is implemented, to allow leased vehicles to qualify as commercial vehicles. Hyundai and South Korea suggested rental cars and ride-share vehicles also ought to be included.

Because tax season is coming up the Treasury will announce their determination on December 31st.

Ultimately, this pits Joe Biden and his agenda against what he needs from allies. Is it better to piss off Joe Manchin and risk getting nothing done or, with a fractured House of Representatives, better to assume nothing’s getting done anyway and make your allies happy so they keep giving guns to Ukraine?

Let’s keep doing that thing every week-or-so where we catch up on Renault to see if they worked it out with Nissan.

Nissan and Renault (and, technically Mitsubishi) have been trying to work out this conflict since the formation of their partnership. There have been promising signs the last few weeks or, at least, promises of promising signs.

This week there’s a minor hopeful sign in that, according to Automotive News Europe, Renault Group Chairman Jean-Dominque Senard and CEO Luca de Meo are being invited back to continue to serve in those roles. While it may seem like small potatoes, Renault has engaged in corporate reshuffling in a way that makes the rulers in the “Game of Thrones” novels seem downright placid by comparison. Clearly, Renault thinks it’s this pair that’s gonna work it out:

Senard reportedly has a good rapport with Renault’s Alliance partner Nissan, and in the months after Ghosn’s arrest repeatedly flew back and forth to Japan to reassure Nissan executives of Renault’s commitment to the partnership.

It’s not clear anyone can make this work, but the last guy who tried had to get wheeled out of Japan in a speaker box so the standards are fairly low.

The graphic designers at Audi didn’t seem to make a big effort in concealing the Audi activesphere concept, which should go a long way to explaining that it’s probably a real concept and not some thinly disguised production car. I just adjusted the curves in photoshops and, lo, there it is.

So, what is this thing?

The Audi activesphere concept provides ultimate freedom and is the perfect companion for ambitious outdoor adventures. Whether it’s water sports, skiing, golfing or challenging mountain roads – the activesphere concept offers ultimate variability for all activities. While the concept car combines extraordinary elegance with outstanding off-road performance, its communication technology creates a unique experience – beyond the car itself.

The four members of the Sphere family – skysphere, grandsphere, urbansphere and activesphere – present Audi’s vision for the premium mobility of tomorrow. The concept vehicles are united not only by a fascinating design, but also by the electric drive and the design for the possibility of automated driving.

It’s an EV crossover concept with skis. Neat! The company calls it the “activesphere” in lower-case, which is annoying.

Report: 2023 Is The Year Of Low Carbon Aluminum

Engineering an efficient, carbon-neutral car is no easy task. Even if you could make a car that runs purely on electricity harnessed from solar panels on the roof, well, you still have to manufacture it.

In theory, a lightweight and efficient car will use some aluminum, which is both light and strong while also being easy to manufacture. The downside is that aluminum is more energy intensive to produce than other common metals.

If aluminum is produced using renewable energy then it’s considered “low-carbon” aluminum and is probably better the environment. There was a dip in low-carbon aluminum production during 2022, but Reuters is reporting that 2023 should see a comeback in the material.

Automakers are taking note, and starting to incorporate more of the material:

Electric vehicle (EV) maker Polestar has started to use green aluminium as part of a project to create a vehicle with zero emissions from every aspect of production, teaming up with Norway’s Norsk Hydro (NHY.OL), which uses hydro power to produce much of its metal.

Polestar said it pays slightly more for green aluminium, partly due to the administrative costs of changing suppliers, but did not say how much more.

“The cost per reduced kg of CO2 emissions when shifting to green aluminium is still significantly lower than many other ways of reducing raw material emissions,” a company spokesperson told Reuters.

It’s worth noting that BMW and Audi are also engaged in low-carbon aluminum products so expect to see more if it in the coming years.

It’s Manchin v. The World, who do you think will win? Who should win?

Howdy! I'm the Publisher of The Autopian which means I'm to blame for at least a small part of this. I used to run another car site and then made movies and TV shows. Now I'm here to convince you to buy a Peugeot.
Read All My Posts »
PrevPreviousFamily-Friendly Haulers: 2007 Kia Rondo LX V6 vs 1999 Volvo V70 GLT
NextOur Daydreaming Designer Imagines Corvette Sedan And Wagon In 1978Next