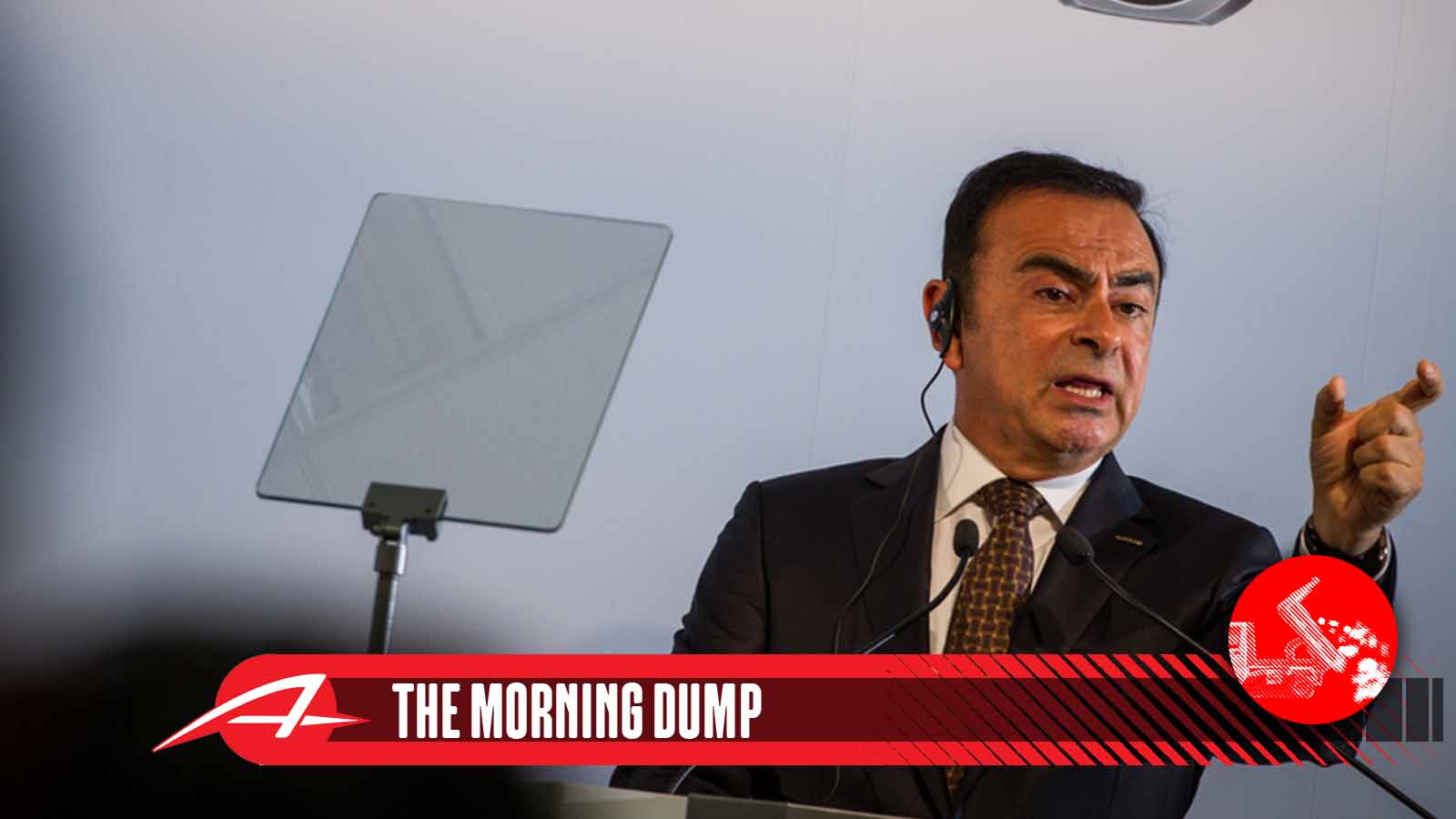 Monday is all about CEOs behaving badly. We learn more about the fate of the men who helped ex-Nissan boss Carlos Ghosn escape. Tesla chief Elon Musk tries to out-cringe Tim Robinson in San Francisco. Skoda’s top dude has some bad news about China. Finally, Stellantis CEO Carlos Taveres has a lump of coal for workers in Illinois.

It’s well-trodden territory, but in case you’ve missed it here’s a rough rehash of what happened to former Nissan-Renault-Mitsubishi CEO Carlos Ghosn:

Because Lebanon does not extradite its citizens, Ghosn has been living in a mansion in Beirut (that was essentially purchased by Nissan). The two guys who helped him escape? They weren’t so lucky, and were extradited from the United States to Japan and had to serve time in prison.

I bring all this up because there’s a good feature in Bloomberg that’s worth reading: “Ghosn’s Daring Escape Cost His Extraction Crew Their Freedom.”

Former Green Beret Michael Taylor organized the affair with the help of his son Peter and another guy. Both Taylors spent real time in jail, with the father sentenced to two years and the son sentenced to 20 months. Both were released early and are now back in the United States.

The big question is: What’s Ghosn going to do? The Taylors insist that Ghosn owes them money for their legal fees and for their escape. Ghosn response to that, saying:

“I’m glad that it is over for them,” he said in an interview in Beirut. “The human cost has been tremendous.”

As for any additional payments to the Taylors, Ghosn declined to go into the details of any agreements. “I am not the type of person who does not honor his contract, particularly for those who have been helpful,” he said.

How much money Ghosn actually has is one of the big open questions. It’s also worth mentioning that Greg Kelly, the ex-Nissan exec in charge of keeping Ghosn from leaving the company and taking a job elsewhere, also spent more time in prison than his old boss. He was released in March.

It was just last week that I shared a report claiming Elon Musk was considering using Tesla stock as collateral for better loans to cover his Twitter purchase. The value of new loans are, of course, contingent of the value of Tesla stock, which is, to some extent, tied to how people perceive Elon Musk.

Tesla’s stock, as of the previous close, was down approximately $221 for the year, or 55%. Since purchasing Twitter, Tesla’s stock has dropped from $228 to $179. It’s been a tough year for tech stocks, with Apple down about 19% over the last year, so it’s not fair to say that Tesla’s stock has tumbled exclusively because of Twitter.

Reporting on Elon Musk is exhausting and people love to write about Elon Musk because it does numbers and I don’t want to get sucked into that game. A question we ask around here a lot is: Would we cover it if it weren’t Elon Musk? Often the answer is: No. So we don’t.

If Mary Barra had been booed off stage at a Bill Burr gig after tweeting some utterly stupid nonsense would we write about it? Yeah, probably. Without getting into all the details, there’s clear evidence that Musk was loudly jeered after being brought on stage by Dave Chapelle at an event in San Francisco. I’m not going to post the video because it’s easy to find and extremely cringe. Just walk way. Just walk away.

Elon Musk’s foray as the richest man on earth is already in peril (if you can even use that word to describe being the richest man on earth) as his Tesla stock is the biggest key to his wealth. Recently, Morgan Stanley’s Adam Jonas (via Yahoo! Finance) estimated that Musk’s Twitter adventure could wipe another quarter off Tesla’s value:

Tesla shares are currently in the throes of bearish sentiment momentum,” wrote the longtime Tesla bull, predicting Tesla could test his $150 bear case price target before the year is out.

Having spoken to a number of investors, Jonas believes confidence in Musk’s leadership at Tesla has been tested owing to the nonstop drama at Twitter, with both consumers and business partners potentially turning their backs on the EV industry leader amid the controversy.

I guess we’ll see. I really don’t want to talk about Tesla stocks anymore, so let’s move on to some important stuff: Skodas.

Skoda Might Pull Out Of China Because China Doesn’t Appreciate Great Cars, I Guess

I’ve got some bad news for Chinese Skoda fans — a group of people I assume exist and have just been ignoring me on Weibo for some reason. According to a profile in European automotive news site ‘Automobilewoche,’ Skoda CEO Klaus Zellmer says the Czech VW subsidiary is thinking about leaving the market:

“The competition is very intense there, so we will consider, together with our Chinese joint venture partner, how we want to proceed.”

Very intense might be an understatement. Skoda currently builds and sells vehicles there through its joint venture with SAIC. Unfortunately, foreign joint ventures haven’t been performing as well lately as domestic Chinese companies are building more competitive vehicles.

It’s not all bad news for Skoda fans in China, however, as the company may still sell cars in the country that are produced somewhere else. You know what country would appreciate Skoda? America. We already love kolaches, Pilsner Urquell, Brendan Frazer…

Stellantis Is Shutting Down Its Belvidere Plant

Workers at the manufacturing facility in Belvidere, Illinois have been making vehicles for various Chrysler entities since Lyndon Johnson was president. Everything from Dodge Monacos (Monacoes? Monégasques?) and our beloved Plymouth Neons have rolled out of the facility. More recently, the plant was used to build Jeep Cherokees.

Stellantis used Friday to dump the news that it was pulling the plug on the facility, indefinitely. From an Automotive News story we have a vague explanation as to why:

“Our industry has been adversely affected by a multitude of factors like the ongoing COVID-19 pandemic and the global microchip shortage, but the most impactful challenge is the increasing cost related to the electrification of the automotive market,” Stellantis said in a statement. “Stellantis has taken a number of actions to stabilize production and improve efficiency at its North American facilities to preserve affordability and customer satisfaction in terms of quality. While it considers other avenues to optimize operations, Stellantis has made the decision to idle the Belvidere Assembly plant effective Feb. 28, 2023.”

“We believe Stellantis is grossly misguided in idling this plant which has produced profits for the company since 1965,” UAW President Ray Curry said in a statement. “Not allocating new product to plants like Belvidere is unacceptable. Announcing the closure just a few weeks from the holidays is also a cruel disregard for the contributions of our members from UAW Locals 1268 and 1761. We will fight back against this announcement.”

If you could be CEO of any automotive company in the world, what would it be?

Howdy! I'm the Publisher of The Autopian which means I'm to blame for at least a small part of this. I used to run another car site and then made movies and TV shows. Now I'm here to convince you to buy a Peugeot.
Read All My Posts »
PrevPreviousDonkervoort F22: Some Fascinating Details On This Five-Speed, Five-Cylinder Screamer
NextFord To Focus: Drop DeadNext