Automotive Would You Rather: Eternally Damp Seats Or Magic Box Of Crap Edition 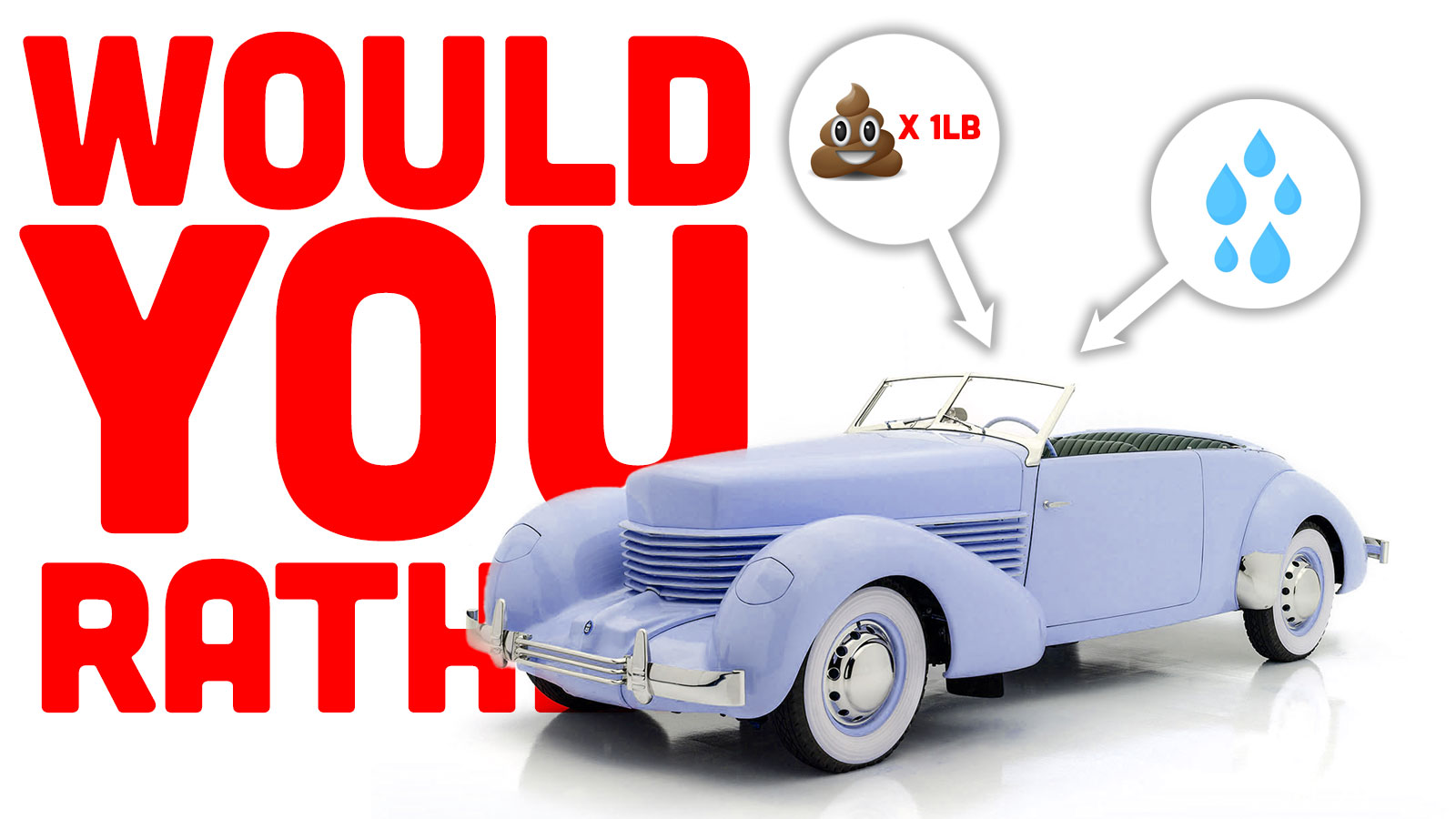 I suppose this is becoming a weekly thing now, this bit of mind-expanding cerebellum yoga that I like to call Automotive Would You Rather. I believe this is a good, healthy practice for all of us Autopians, as it lets us explore the rarely-approached conundrums of the automotive culture in a free, welcoming environment, not like when you try to bring these issues up at your local Cars and Coffee, and then everyone turns on you and starts pelting you with garbage and the occasional scissor jack.

We’re not like that. So, with that in mind, prepare to choose between these two carefully-crafted Automotive scenarios, generated by the most advanced AI system you can run on a Texas Instruments 99 4/a computer.

SCENARIO ONE: The Seats of Eternal Dampness

While attempting to change your oil filter one afternoon, you find that the filter is screwed on absurdly tight, and you can’t get a good grip on it at all. So, you decide to use the tried-and-true desperation measure of hammering a screwdriver through the whole damn thing and using the leverage of the pounded-in screwdriver handle to grip it and get it off.

Once you punctured the outer skin of the fuel filter, you hear a loud pop and woosh and a glittering miasma shoots out of the hole in the filter and congeals into a roughly humanoid-shaped cloud, perched upon your air cleaner.

The cloud tells you that it is The Oily Genie Of Filtratia, and is delighted to have been freed from that miserable canister, forced to filter out your long-overdue-for-a-change 20W-50. In thanks for its freedom, the Oily Genie will grant you the lone wish it is capable of providing: any car you touch will become yours, legally, emotionally, in every possible way!

You can go to an auto museum and lay hands on a 1936 Cord 810, and boom, it’s yours. Go to a Mercedes-Benz dealer and lean against a new EQS and all the paperwork will materialize in your hands and you can drive it home, that day. Go to a used car lot and stumble backwards into a 1977 Ford Granada that needs a new transmission and has a vinyl top that seems to have contracted mange, and it’s your problem now. You get it: you touch it, you own it.

There’s one catch, though: once you own the car, all the seats will be quite damp, even flat-out wet, for the rest of the life of the car. You can vacuum them or take a blow dryer to them or sop them up with towels, but, sadly, they will always be wet. This also means that if you touch a Bugatti Chiron and sell it, the new owner will have to deal with wet seats, too.

So, to recap: You can own any car in the world car for free, but the seats will always be very, very moist.

Enticing, right? Now let’s go to your next option:

SCENARIO TWO: The Shit You Need To Keep Your Car Running

You’ve just finished changing your oil, so you’re digging a hole behind your house to dump the used oil in, because you’re too damn lazy to take it to the auto parts store to be recycled. You really need to stop doing that.

While digging, your shovel hits something hard; you feverishly dig and scrape and free the object, a human skull, which you quickly realize is the skull of famous CHiPS actor Erik Estrada, something you deduced by the trademark mirrored aviator sunglasses and the words PROPERTY OF ERIK ESTRADA (yes, that one) IF FOUND PLEASE CALL 424.239.1050 that are inscribed on its side.

You call the number and have a conversation with Erik Estrada’s assistant who assures you that Erik will be thrilled to know his skull has been found, safe and sound, and he should be there within the hour to collect it, and please don’t mention anything about his floppy-looking head, which desperately needs its skull back.

Precisely 58 minutes later you hear a sonic boom and see a figure in a parachute gliding down to your yard. It’s Erik Estrada, his misshapen head mostly hidden under a helmet. He shakes your hand and greedily grabs the skull, flinging the sunglasses to the ground before retreating behind a tree, where you hear sickening squishing and cracking noises.

A few minutes later, Estrada emerges, looking hale and handsome, adjusting the angle of his jaw, and beaming a 1,000-watt smile in your direction.

He thanks you profusely, and tells you that you have a reward coming. He pulls a velveteen sack from his pants and removes an amulet, which he places around your neck. You can feel it warmly pulsing against your chest with a strange, powerful energy.

Erik tells you that this amulet has the power to repair any car, in nearly any condition, via powerful dark magic. It can reconstitute rusty panels, materialize missing hoses and belts and other parts, re-hone cylinders, eliminate electrical gremlins, you name it. And all it needs to work is one pound of your stools, in an open box.

Yes, if you defecate while wearing the amulet, and accumulate one pound of enchanted feces, then place the feces in an open box, and then place that box somewhere inside the passenger cabin of a car, the car will, again, via dark magic, become fully repaired.

The fecal box will also be able to prevent damage from happening to the car while the box is in there and the feces is potent – which is, generally, for about a month. Then the feces needs to be replaced. But, this works for crash damage, too: if there’s a box of still-active magic shit in the car, dents will pop out, paint will re-form, scratches will heal, and glass will um, unshatter. It’s really amazing to see.

So, to recap: shit while you’re wearing the Estrada Amulet, and one pound of that shit will repair and protect any car you place it in, for about a month. Refill as often as desired, for as many cars as you want. You could open a car repair shop, as long as you can convince your clients to just deal with a one-pound box of human shit in their car.

Okay, so those are the scenarios! It’s time to vote!

I'm a co-founder of the Autopian, the site you're on RIGHT NOW! I'm here to talk to you about taillights until you cry and beg me to stop, which I absolutely will not. Sorry. Hug? Also, David's friend.
Read All My Posts »
PrevPreviousMy Yamaha U7E’s History May Be Lost To Time, But At Least It Has A Clean Carburetor
NextThis Old Ford Styling Film Is Incredible And Features A Car That Feels Like The Template For Modern SUVsNext